Since series one in 2006, Great British Menu has grown into the TV highlight of the year for many a foodie fan, myself included.

Many people on twitter have been hailing the North West’s regional heat between Aiden Byrne (who has previously held a Michelin star), Johnnie Mountain and Simon Rogan (whose restaurant currently holds one Michelin star) as the most exciting of the series so far.

This year’s competition has been particularly special to me as I am no stranger to Aiden's and Simon's food. Over the last year or so I have been lucky enough to have dined in their restaurants on several occasions. Their styles may wildly differ but they are both undeniably exceptional chefs – I for one, am proud to have had them representing the North West. 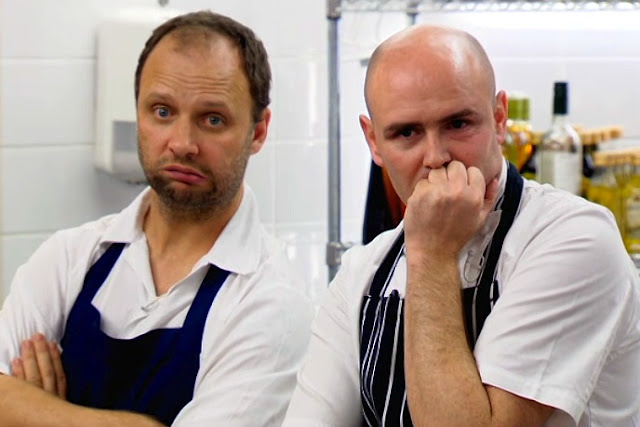 Early on in the week, drama ensued when Johnnie Mountain theatrically quit in a torrent of abuse after earning a score of 2 out of 10 for his ‘fish’ dish, which was ‘heavily inspired’ by Heston’s Sound of the Sea (albeit minus the seafood, conch shell, iPod and originality.)

At times this week, the debacle surrounding the ‘fishless fish dish’ took much of the limelight and discussion away from the fact that the quality of Aiden’s and Simon’s understanding of the brief, cooking and passion has been exemplary.

Simon Rogan
Whilst I don’t want to appear as if I am writing off Heston’s or anyone else’s restaurants, I believe, Simon Rogan’s L’Enclume is, the most exciting restaurant in the country. After visiting the farm and having eaten in three of Simon’s ‘restaurants’ in the last twelve months: Rogan and Co (see here), L’Enclume (here) on a couple of occasions and the Aulis Research & Development Kitchen (here), I share in Simon's and his team’s vision and am excited not just by the food they serve now but also the direction they are taking. 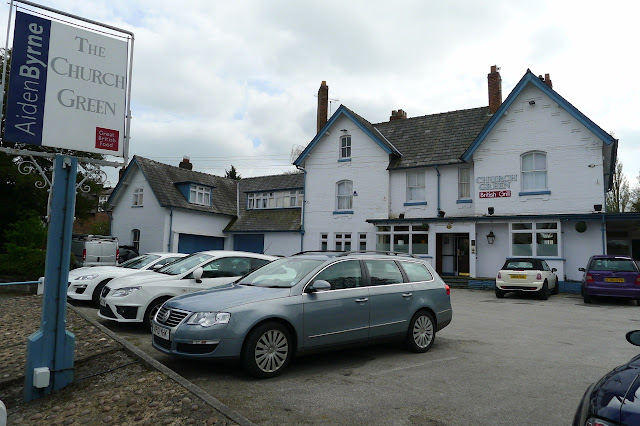 Aiden Byrne
Since returning to the North West after successful stints in restaurants such as Adlards in Norwich, The Commons in Dublin and the London based Pied à Terre, Tom Aikens and The Grill at The Dorchester, Aiden has run The Church Green gastropub in Lymm near Manchester with his partner Sarah.

The Church Green has three AA Rosettes but has never been the right venue to fully showcase Aiden’s Michelin style food and aspirations. The food there though is some of the best you will find in the North West; in that last few months I have been fortunate enough to enjoy their ‘tasting menu’ (see here), the much applauded Inka grilled burgers (here) as well as a meal at Aiden Byrne’s British Grill at Craxton Wood (here). 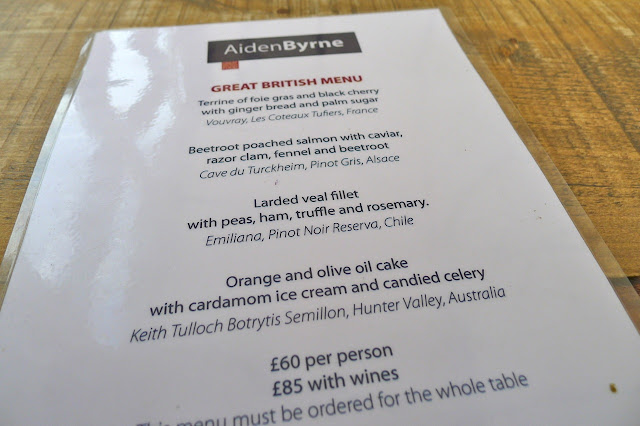 The Food
Last week, I also managed to get along to The Church Green to sample Aiden’s ‘Great British Menu’ created to fulfill the ‘GastrOlympics’ brief. As judge Matthew Fort explains, chefs have been asked to get out of their ‘culinary comfort zone’; push the ‘bounds of gastronomy’; beat their ‘personal best’ and be ‘faster, bigger, higher, better, more brilliant than ever before.’

Although Simon was the overall victor, Aiden went into the judge’s chamber ahead on points – quite an achievement against a chef of Simon’s standing and familiarity with the ‘technical gadgetry’ - the chefs had been challenged to source extraordinary ingredients and use ‘molecular gastronomy’ methods including: spherifications, liquid gels, thermomixes, liquid nitrogen, water baths, centrifuges and desiccators. 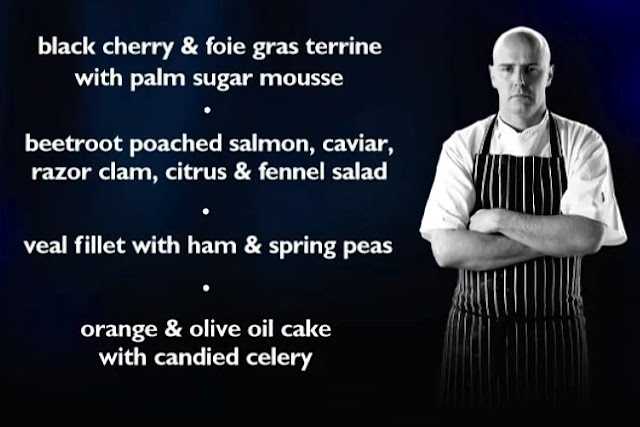 When I ate the meal at The Church Green I told Aiden I’d put a post together and offer my take on the menu. Of course, next to a professional of Marcus Wareing’s standing, knowledge and knowhow, I understand my opinions count for little. 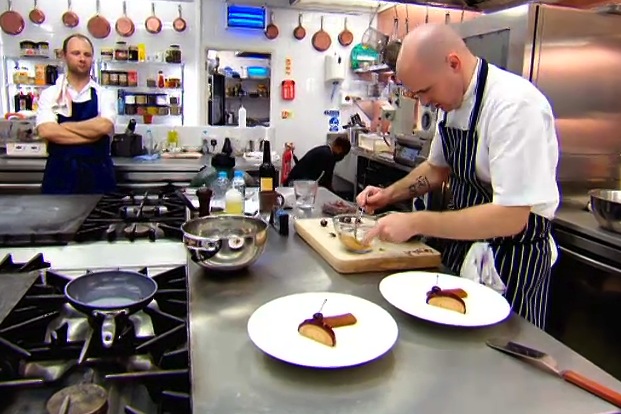 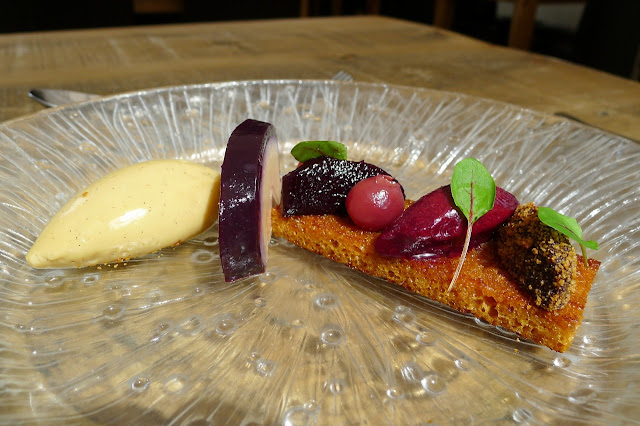 I’ve scored this dish an eight for the reason that whilst each element of the dish was worthy of a ten, it didn’t quite come together for me. Individually, I loved the foie gras terrine cherry glaze; poached cherries; sorbet; jelly; foie gras and palm sugar mousse and wonderful pan-fried gingerbread. 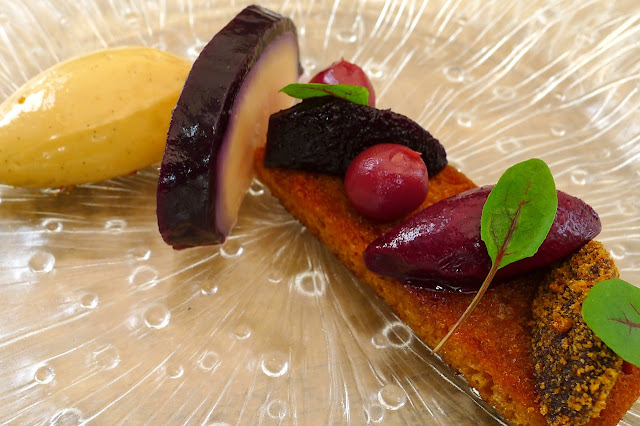 Overall there was a little too much sweetness on the plate to warrant full marks from me. I agree with the judges that this dish world work well as a dessert. To hit full marks as a starter, I’d have preferred the port, red wine and spice flavours to have come through a little more. 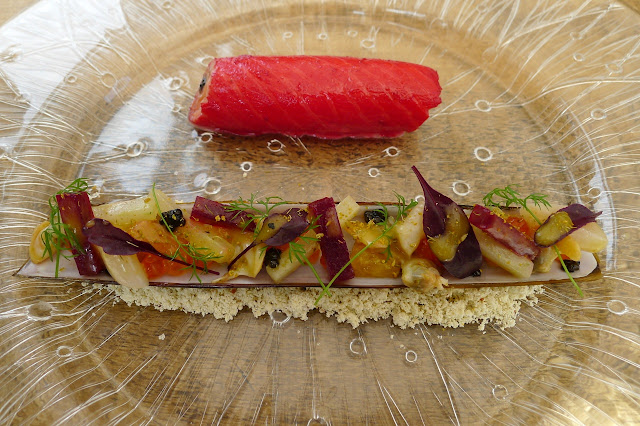 Described by Prue as ‘picture perfect’ and by Marcus as perfect though his score of ten I do feel to be a little harsh ‘only’ giving a nine. The reason for the deduction of a point from an otherwise perfect dish was for the fennel “sand” that sat under the razor shell, which I found stuck to the roof of my mouth a little. 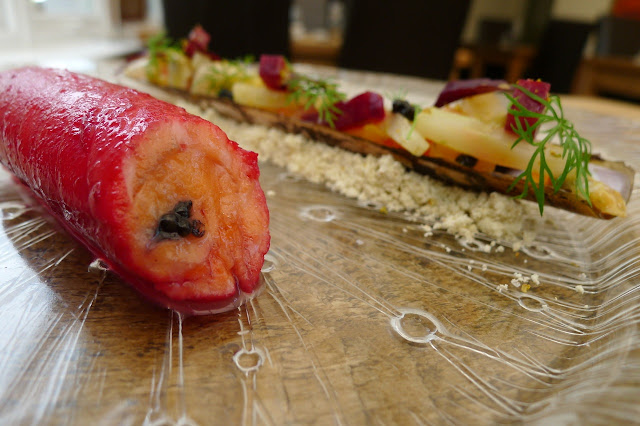 Aside from the stunning presentation, the ‘perfect’ aspect of the dish for me was the technical precision in the cooking of the fish. The beetroot poached salmon, with its Ebène caviar centre was exceptional and to die for. 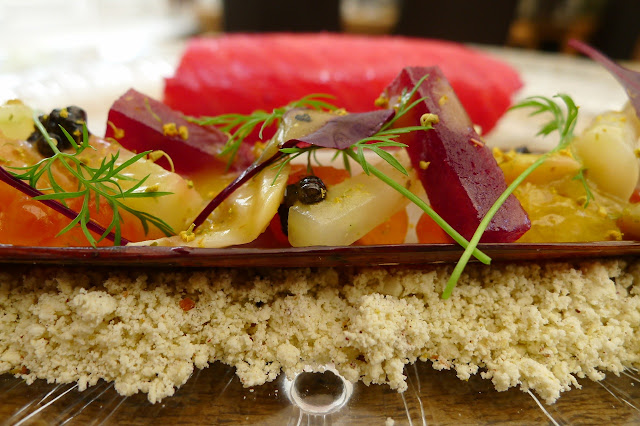 The citrus, beetroot and seafood salad with more caviar and salmon roe was just beautiful in both appearance and taste – the razor clam was as fresh and tenderly cooked as any I’ve had. 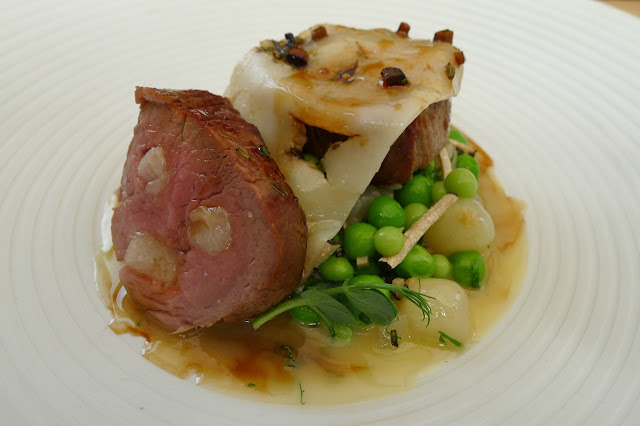 On paper this dish did not sound so good; the word ‘larded’ is never appetising. On the plate too, visually the ham fat batons threaded through the centre of the rose veal (piquer) did not float my boat. Taste wise however, this dish really came together for me - the ham fat and searing in rosemary butter adding a heartiness that made this the best veal I have ever eaten. 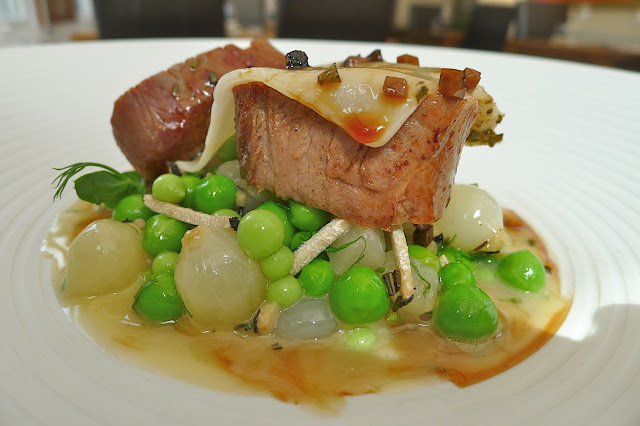 I read some comments where people have knocked the pea spherifications but I welcomed the variation in texture – on the practice day they were described by Simon as ‘floppy’ but the ones served to me in The Church Green were wonderful. Aiden has obviously perfected this ‘new technique’ since filming.

Ultimately it was the pea and ham fricassee and truffle in that rich, indulgent stock and butter emulsion that elevated this dish to a nine for me. 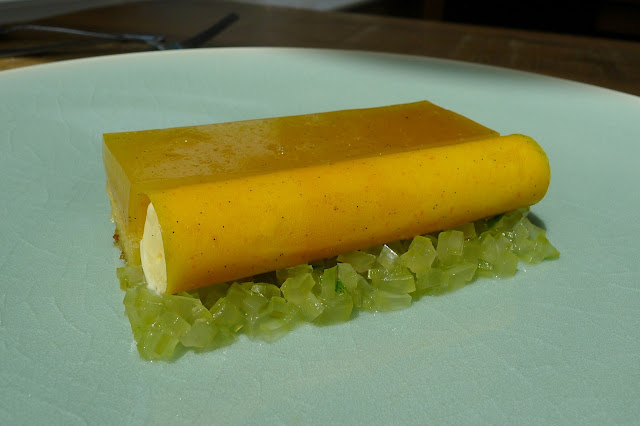 It took me a couple of attempts to fully ‘get’ this dish. When I first tried it on The Church Green tasting menu I loved its ‘immense’ flavour but was not wowed by the overall appearance (see here). Watching Aiden prepare the dish on TV however, I now have a great appreciation of the technical difficulty of the cannelloni and appreciation of the clean lines that Matthew Fort described as having an, ‘Air of Zen like tranquility.’ 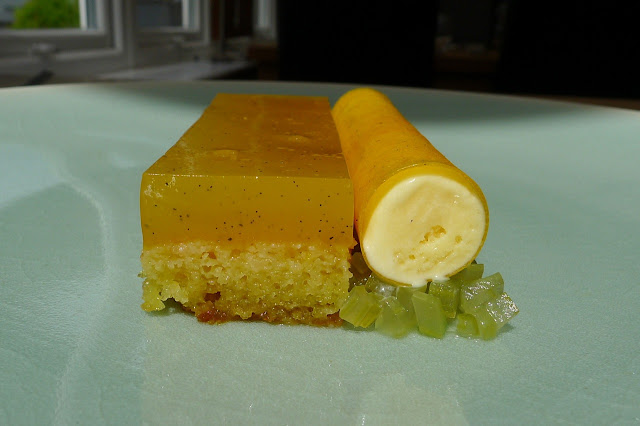 The use of the olive oil, candied celery and cardamom in the dessert will also be new to most - I’ve looked back over some of the desserts I’ve eaten over the last few months including in some of Paris’ best restaurant and have struggled to find a dessert that I’d be as happy to eat again as this one. 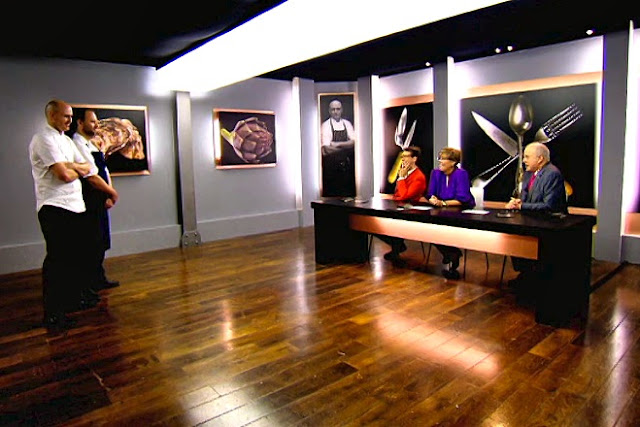 The result
All in all, I loved Aiden’s menu but if it had to be beaten then at least it was by Simon, another chef whose food I love. At the end of the day the real winner is the North West region for producing the best heat of the show so far! Good luck Simon for the rest of the competition. 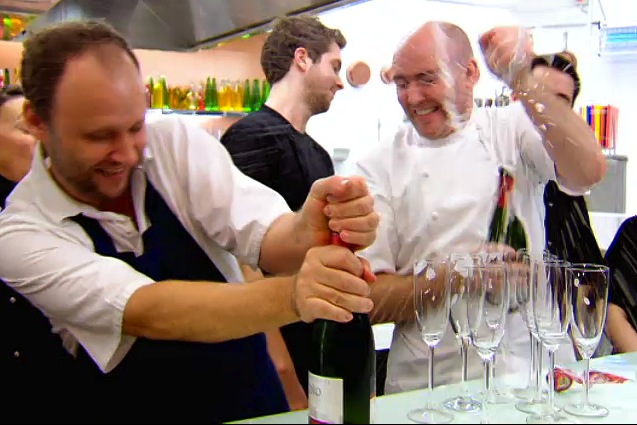