Despite loving Thai food, when Thaikhun announced that it was to open in Manchester, I didn’t get overly excited. Firstly, it is in the soulless Spinningfields and, more generally, I’ve all too often been disappointed with Thai food in the UK.

Still, the good little food blogger that I am, I went along regardless to check it out. To be fair, despite serving ‘Westernised’ versions of Thai dishes, the whole experience wasn’t quite as bad as I had expected. The décor is a bit cheesy (like a Thai version of TGIs) but some of the little details did their job and reminded me of my travels in Thailand… less so, the food.

As a stroke of bandwagon jumping brilliance, Thaikhun have taken most of the dishes known as ‘Appetisers’ from the menu on their sister restaurant Chaophraya and cleverly rebadged them as trendy ‘Street Food’.

My memories of Thai ‘street food’ included delicacies such as chicken feet and little chicken hearts and kidneys on sticks… you may be able to get all this stuff in Manchester’s Chinatown but not in Spinningfields.

The best dish of those selected was the braised ‘Khao Kha Moo’. This is a dish that I’ve had a couple of times in Thailand - the best version being at “Or Tor Kor Market” in Bangkok (see here) from a lady who specialises in just the one dish.

Perhaps to appeal to a broader market, Thaikhun’s version (like the rest of their food) was not way off the mark in flavour but it was just a little too “safe” for me. For example, what had they done with the best bit, the deliciously fatty and gelatinous skin?

Before I become too harsh towards Thaikhun, I’ll say that for a good night out in funky surroundings with decent enough (albeit Anglicised) food you could go to far worse places… but for true Thai flavours and an authentic experience, in my mind there is only one place in Manchester to go… Siam Smiles.

Siam Smiles Noodle Bar can be found on George St, in Manchester’s Chinatown, in the basement location of Thai grocers Siam Supermarket (formerly Kim’s). They have been serving food for just a couple of weeks but I have already been back several times and have loved every experience. The simple menu contains about twenty items - most of which are noodles dishes or salads; all of which are deliciously authentic. All dishes range in price from just £5.50 to £6.50.

On every visit I have made, the place has always been busy; mostly with Thai women – the Thai equivalent of ‘ladies who lunch’. There seems to be a real community spirit and feel. During one lunch, some local monks had come to eat and receive offerings of food from the staff – in return, both staff and customers knelt and were blessed by the monks’ prayers (I’ve never seen that in Spinningfields.)

As a ‘Noodle Bar’, Siam Smiles serve versions of each of the more common Thai broths. Traditionally, ‘Kuay Tiew’ (often spelt ‘Kuey teow’) refers to the noodles but has also come mean soup.

The standard clear stock in Thai cuisine is called ‘nam sai’, which can be made from chicken, pork of beef bones with the basic seasonings of salt, pepper, garlic, sugar and coriander. Dishes with other proteins such as ‘Kuay Tiew with duck’ will be served in the ‘nam sai’ in which they have been simmering.

‘Tom yam’ (or ‘tom yum’) refers to the classic spicy/sour broth; ‘nam tok’ (or ‘naam tok’) will have had pork blood added to give a richer flavour and darker colour and ‘yen ta fo’ is fish based. Veggies and pescatarians be warned that Siam Smiles may not be an ideal place for you as even their ‘Yen ta fo’ contains blood… it’s proper authentic stuff!

If you are new to Thai food, on each table you will find various condiments – use these to make the kuay tiew “your own”. From my observations, most of the Thai folk will begin by adding at least a couple of spoonsful of chilli flakes (for heat), chillies in vinegar (for sour notes and heat), sugar (for sweetness) and peanuts (for their flavour and texture). They will then add smaller amounts according to taste. Soy, fish sauce (for a salty, savoury flavour), fish paste and extra fresh chillies are also available but may not be on every table. Just ask.

My only other piece of advice is a little mixed - if you arrive too late after 12pm you’ll run the risk of the more popular dishes having sold out. However, if you arrive too early, some dishes may not be ready. Soz if that’s not much help (They serve food between 12 and 7pm)

Another thing to note is that I’ve found little inconsistencies – for example, on one visit I found the ‘Lab Moo’ incredibly spicy and delicious; on another visit it was less so. Never however has a dish disappointed and I have now eaten most of the menu (a notable exception being their elusive ‘Kow ka moo’ that has never been ready). 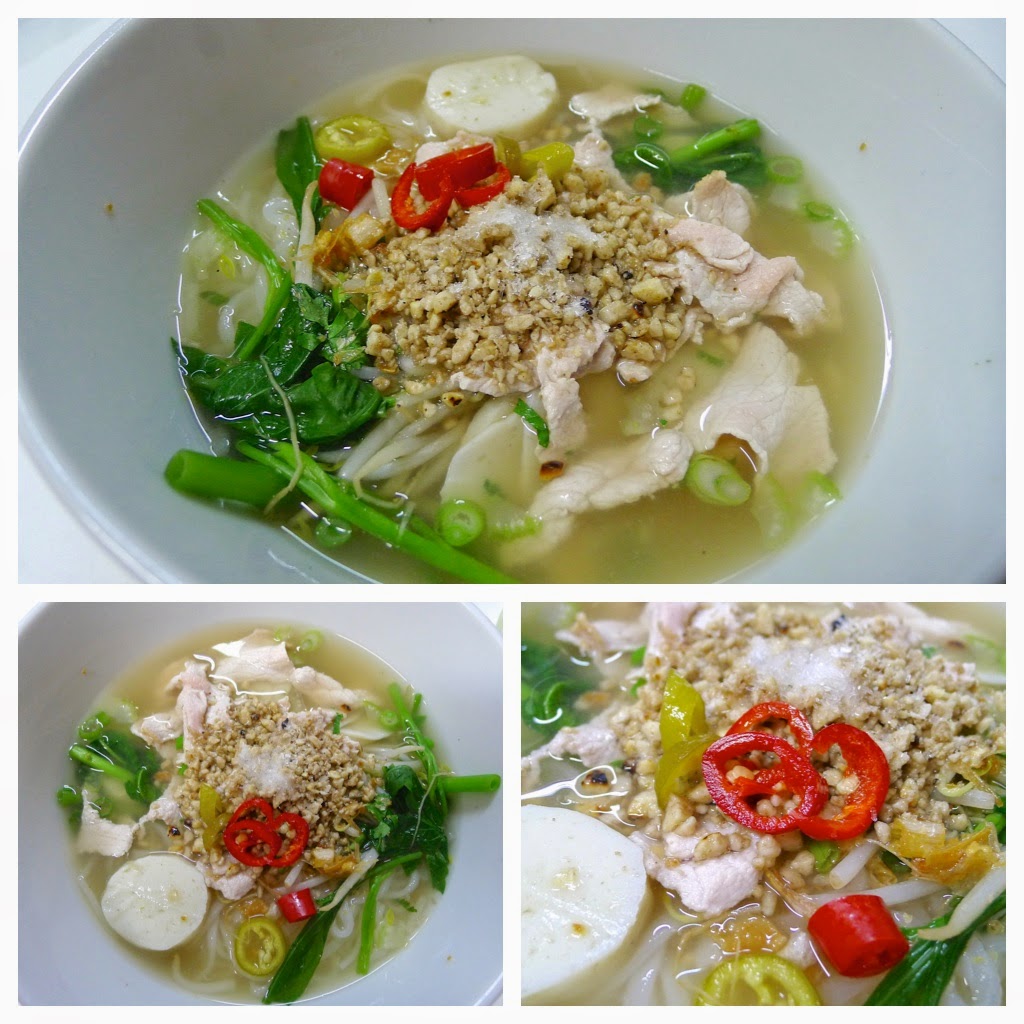 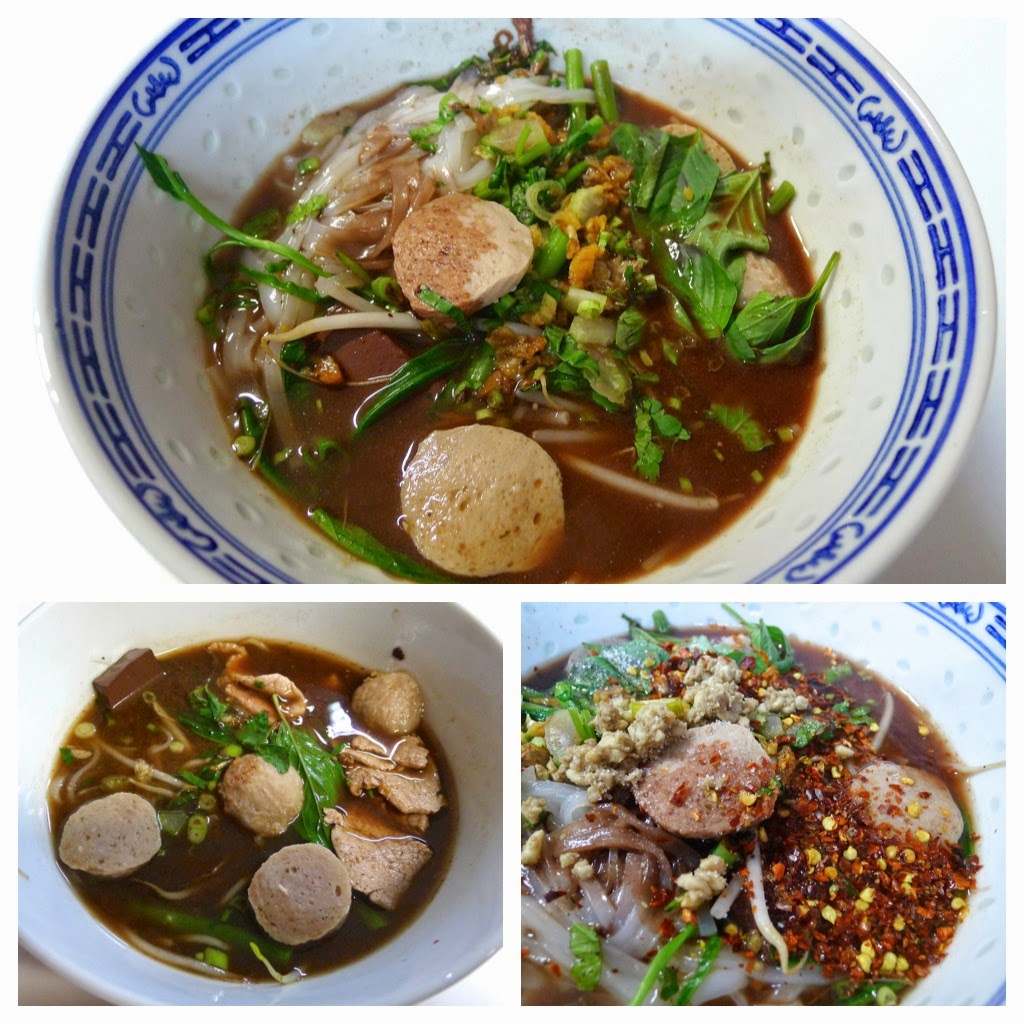 Kuay Tiew ‘Moo Nam’ – a dish commonly known as ‘boat noodles’; one of the most distinctive features being the use of pig’s blood, which is traditionally added to the broth just prior to serving. Sometimes, as is the case at Siam Smiles, a ‘slice’ of curdled blood is also present along with Chinese spices, sliced pork, pork ball, pork liver, morning glory, bean sprouts, green onion, coriander and fried garlic. 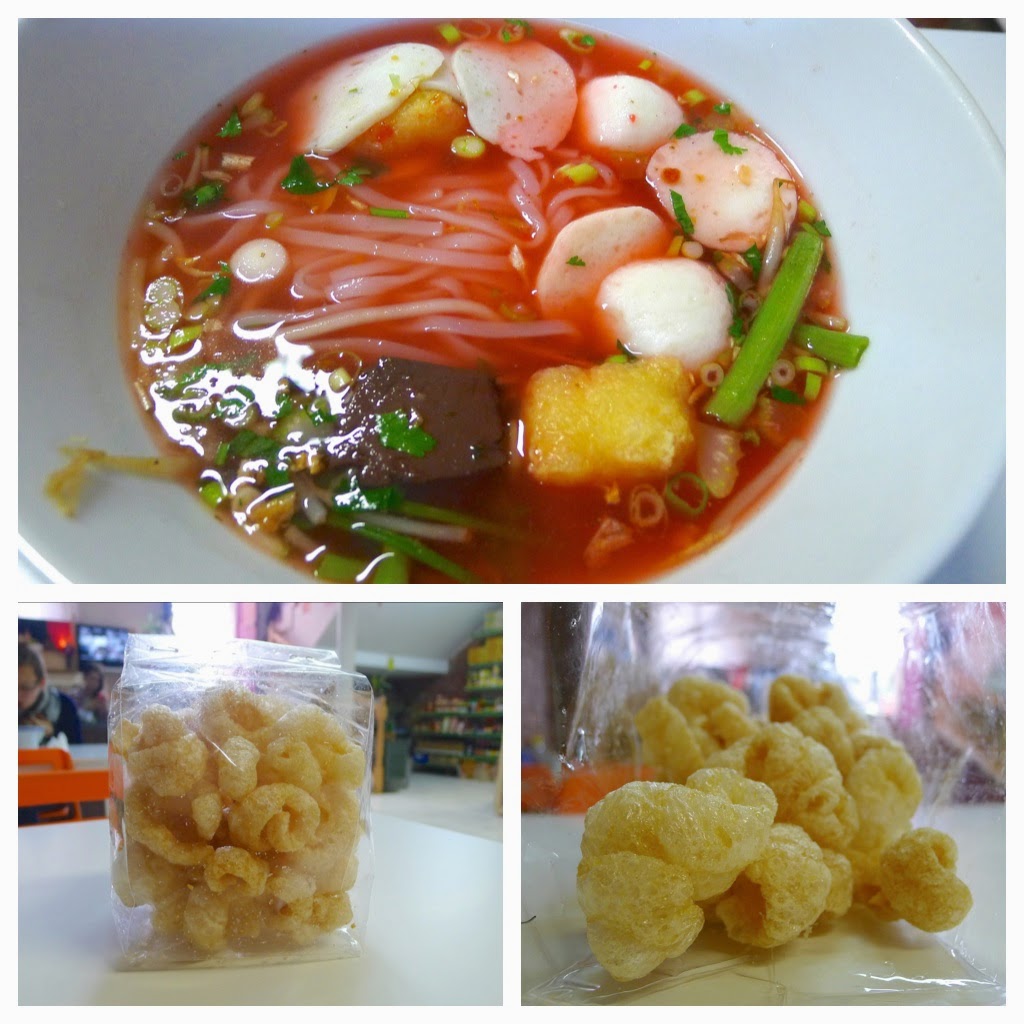 Kuay Tiew ‘Yen Ta Fo’ – a soup consisting of flat noodles, fermented tofu, fish balls, curdled blood, morning glory and coriander. The bright orangey red colour comes from the fermented (red) tofu, not the curdled blood as you may expect. The fermented ingredients including fish sauce, shrimp paste and the tofu give the dish a deep savoury flavour whilst still being light. With this soup (and with others) the ‘done thing’ seems to be to get a packet of pork scratchings from the shelves in store for dipping. 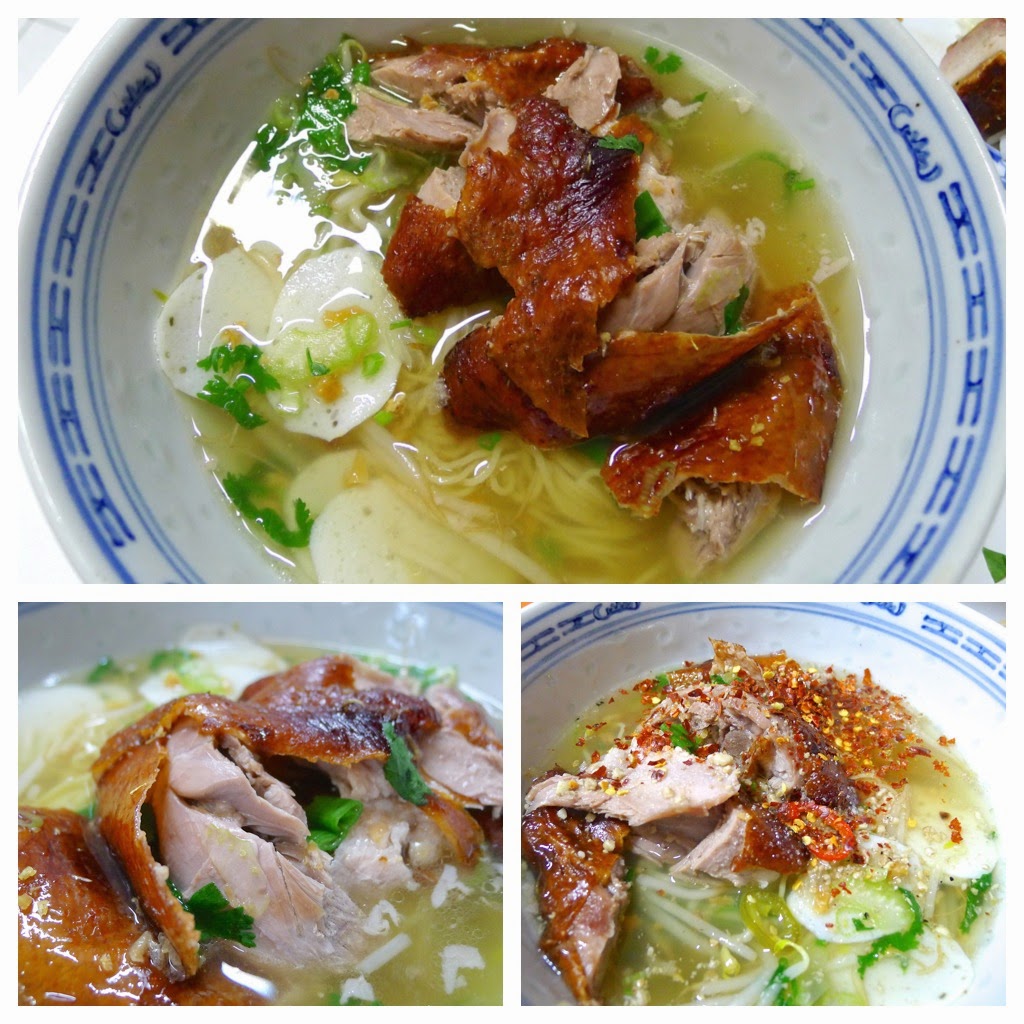 Kuay Tiew ‘Duck’ – yellow egg noodles in a ‘duck’ broth with roast duck, sliced fish balls, morning glory and bean sprouts. This is probably my favourite of Siam Smiles’ noodle dishes – I particularly like this type of noodle (known as ‘sen ba-mee’) and also how the fat from the duck flavours the broth; the crispy skin is another plus. 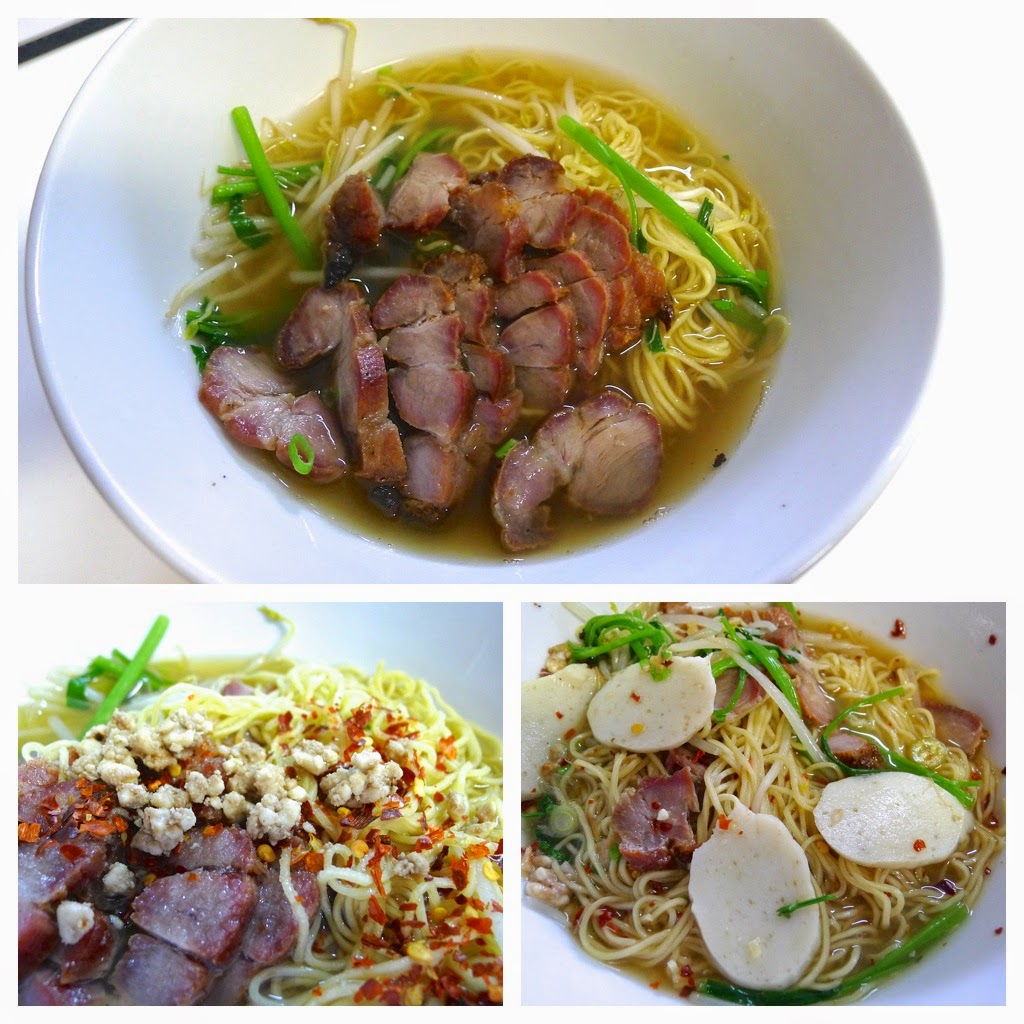 Kuay Tiew ‘Moo Dang’ – another yellow egg noodle dish, this time with red BBQ pork (Chinese five spice). Sliced pork balls, bean sprouts, spring onion and a little choi sum finish the dish. As with all the noodle dishes, the final flavour is down to you own preference and use of the condiments. 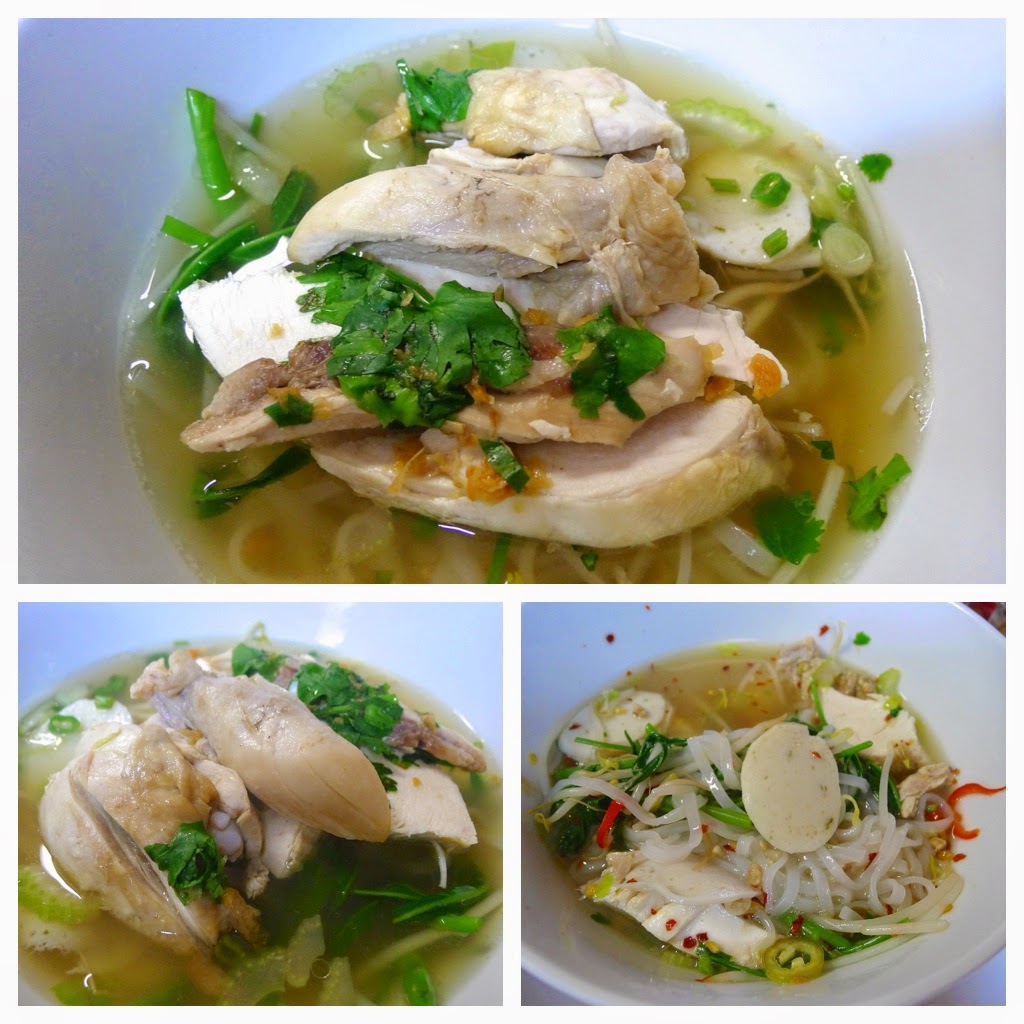 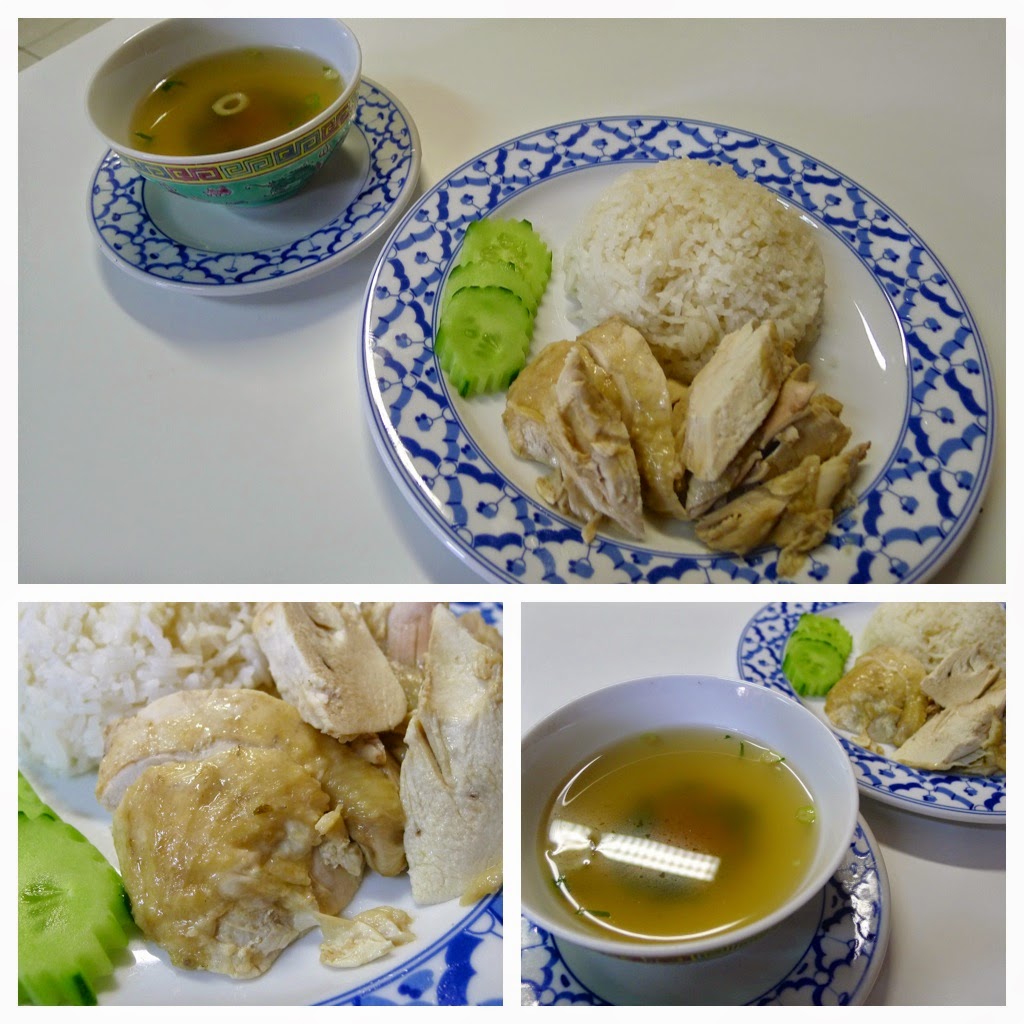 Kow Mun Kai – translating as 'oiled rice with chicken', Kow Mun Kai is the Thai version of ‘Hainanese chicken rice’ - a dish popular throughout South East Asia, particularly in Malaysia and Singapore. At Siam Smiles corn fed chicken, rice and cucumber is simply served with a small bowl of the rich chicken broth, which gets its ‘oiliness’ from the fat (and therefore flavour) from the chicken that has been simmered in it for some time. 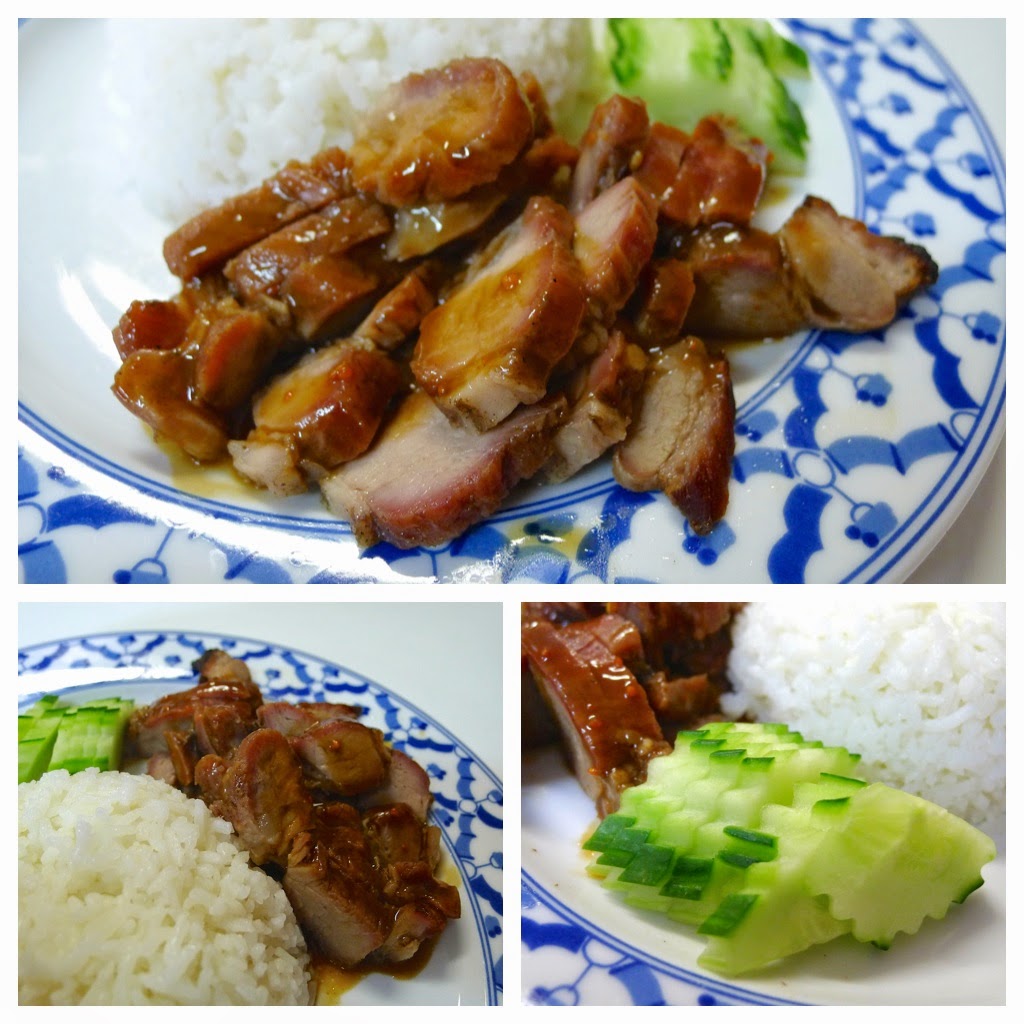 Kow Moo Dang – roast red BBQ pork with rice. A simple dish of pork flavoured with Chinese five spice and served with rice and cucumber (I believe a boiled egg is the usual accompaniment). 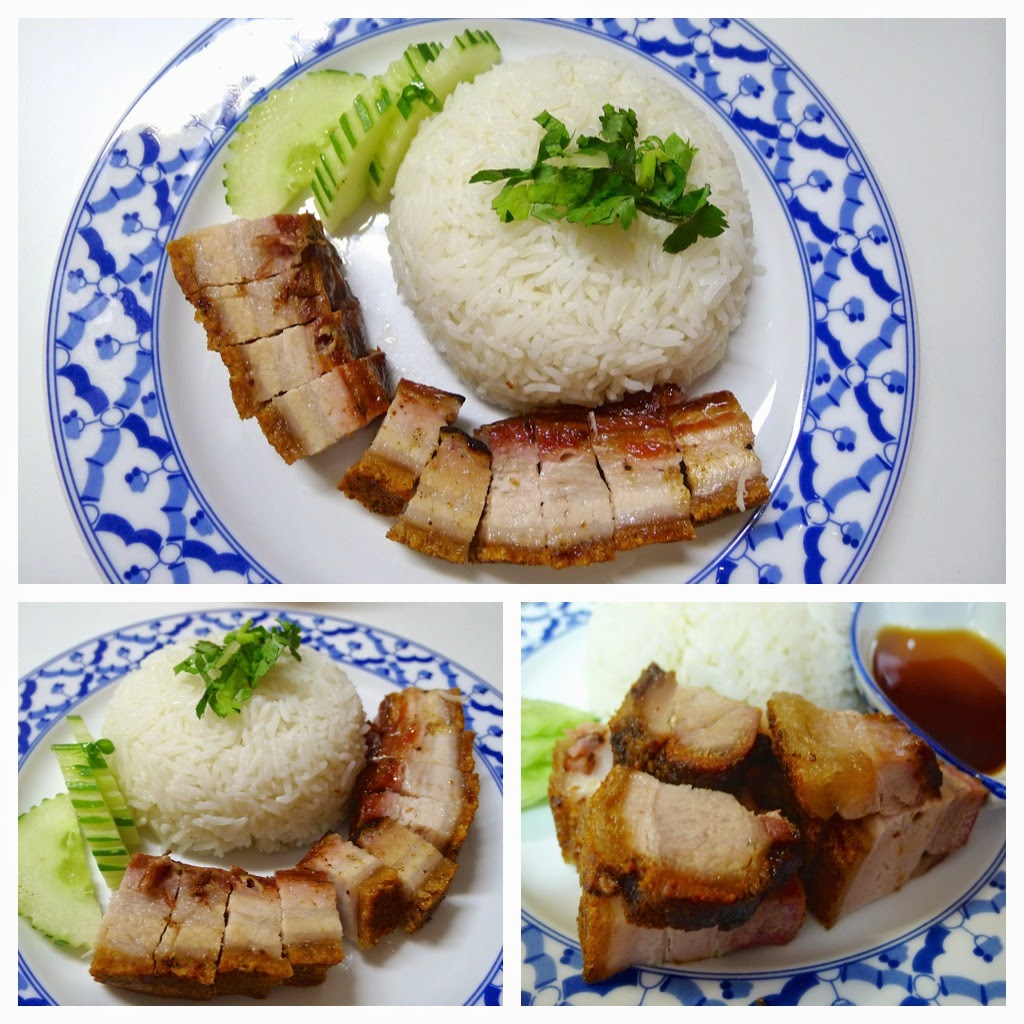 Kow Moo Krob – crispy pork belly with rice and pork sauce. I’ve had this dish twice now and neither time did it come with a sauce as ‘advertised’. This wasn’t a problem however because the pork was mouth-wateringly moist with a crisp skin; so a quick dip in soy was all that was needed. 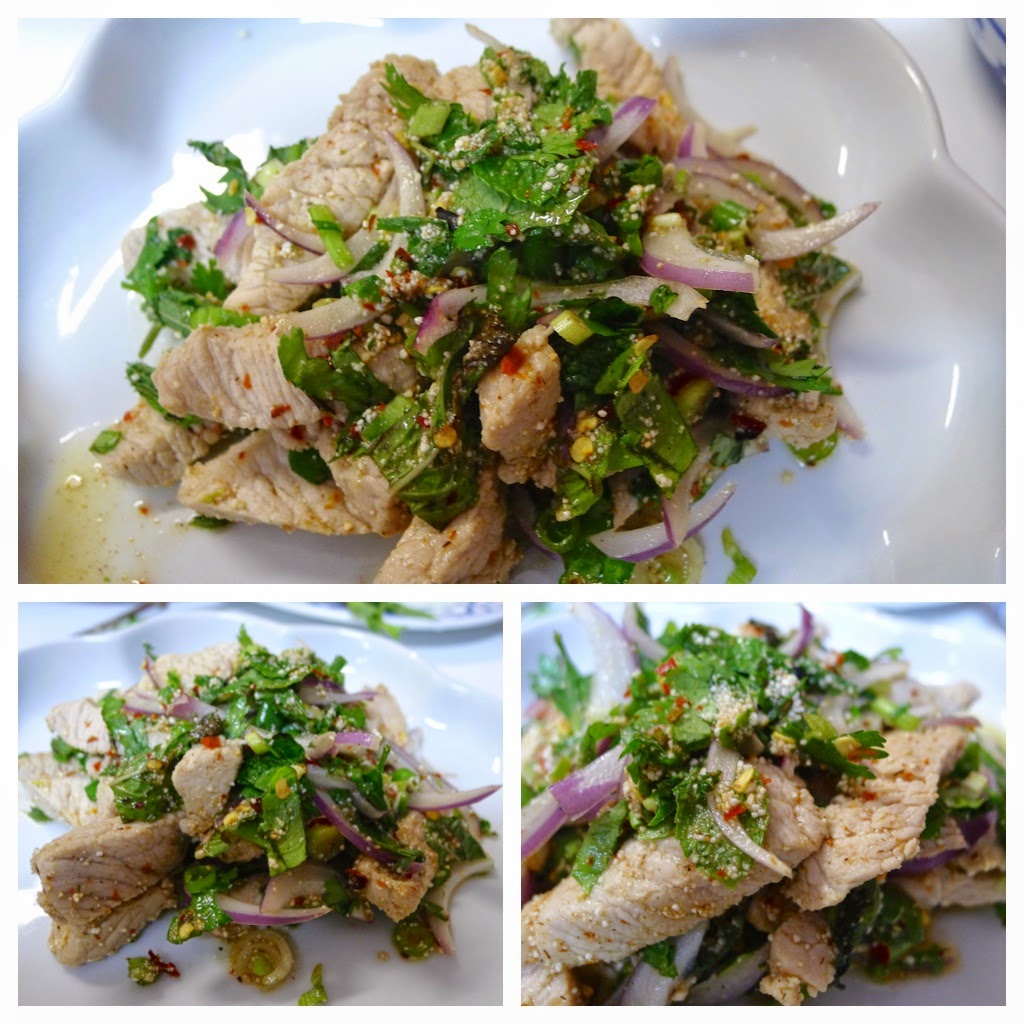 Laab Nam Tok Moo – grilled pork slices with Thai spices. I’ve had this and the similar Lab Moo (below) twice each. On one occasion (different days) both of them have been very spicy and all the better for it; on the times when they have been less spicy, they’re still very fresh dishes thanks to the mint leaves and crunchy red onion. 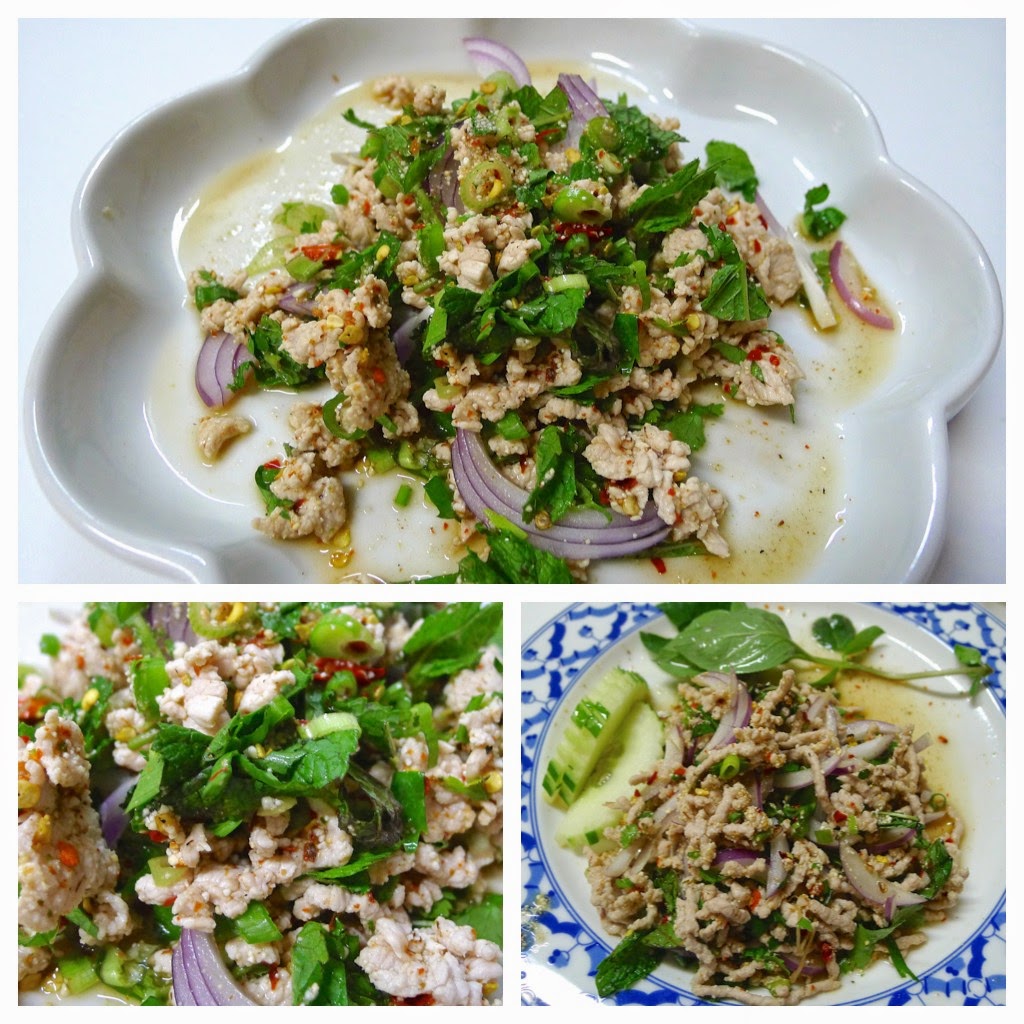 Lab Moo – mince pork salad with fresh mint and their herbs. As mentioned, this is a similar dish to the Laab Nam Tok Moo (above).
Of the two I prefer the one with the slices of pork over the mince, which I found a little dry and grainy. 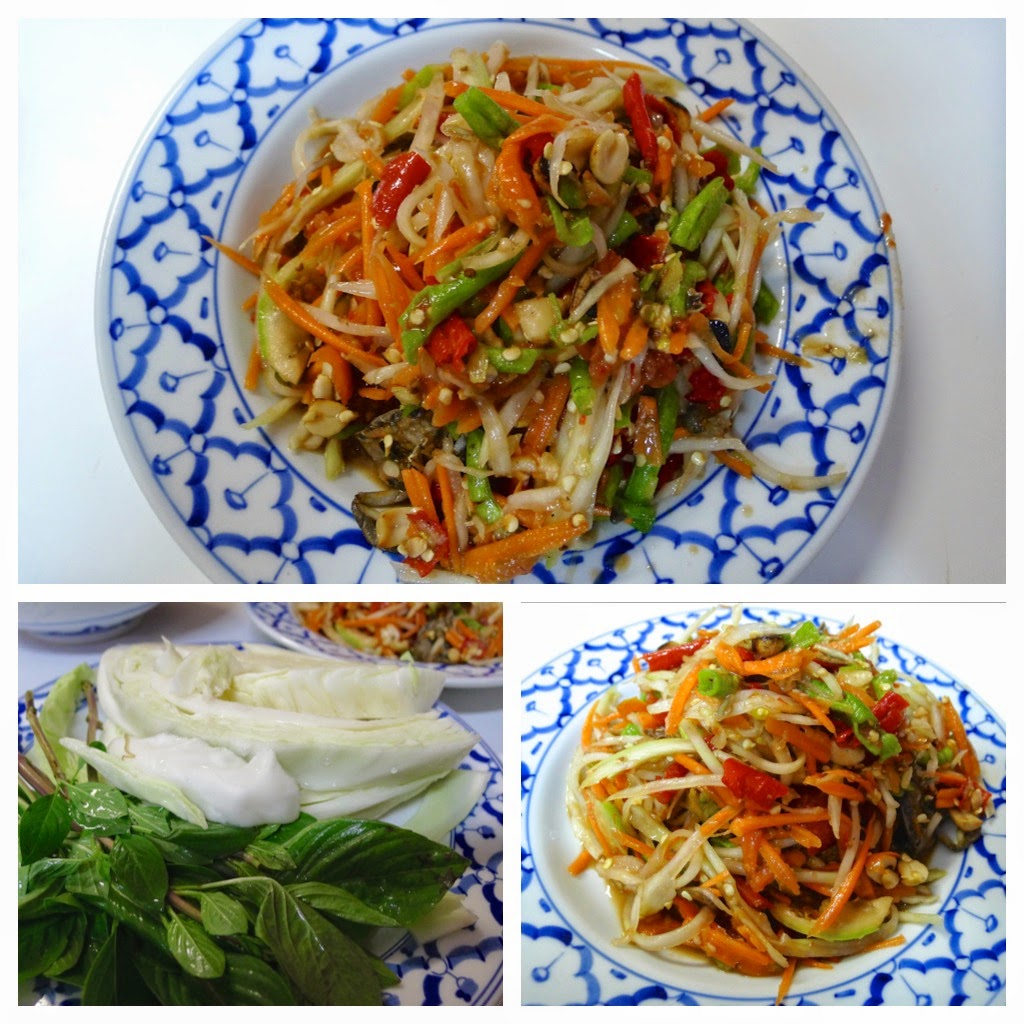 Som Tam E-san - green papaya salad, E-san style. If you haven’t had one before, be warned that som tam can be a deceptively spicy dish. This is especially true of the Issan (or E-san) version, which has considerably more chillies, garlic and delightful little salted crabs. 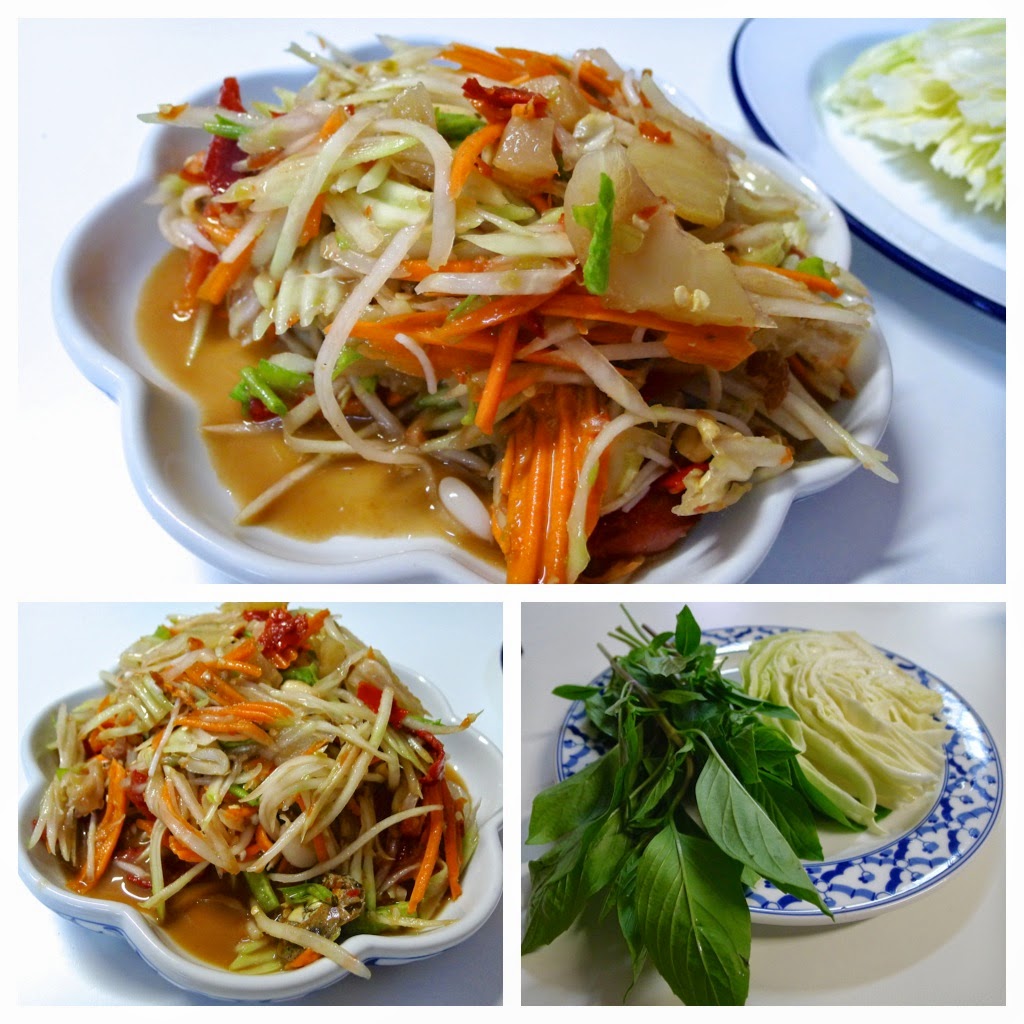 Som Tam – green papaya salad with peanut and dried shrimp. At other places I have found this dish is often served far too sweet or with too much fish sauce for my taste. For me, Siam Smiles effort is well balanced with chilli, lime, fish sauce and palm sugar. The dishes authenticity also shines through with the addition of salted crabs, which are to be eaten shell and all. 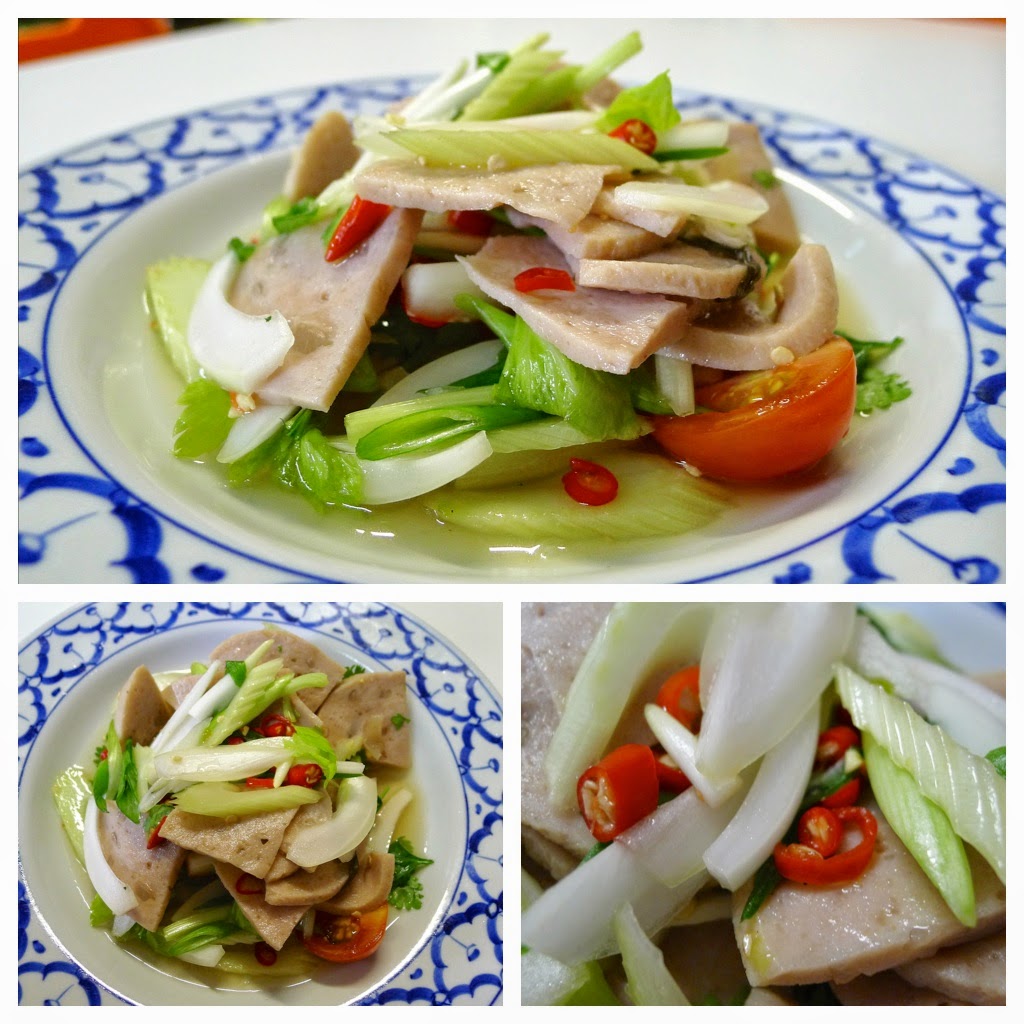 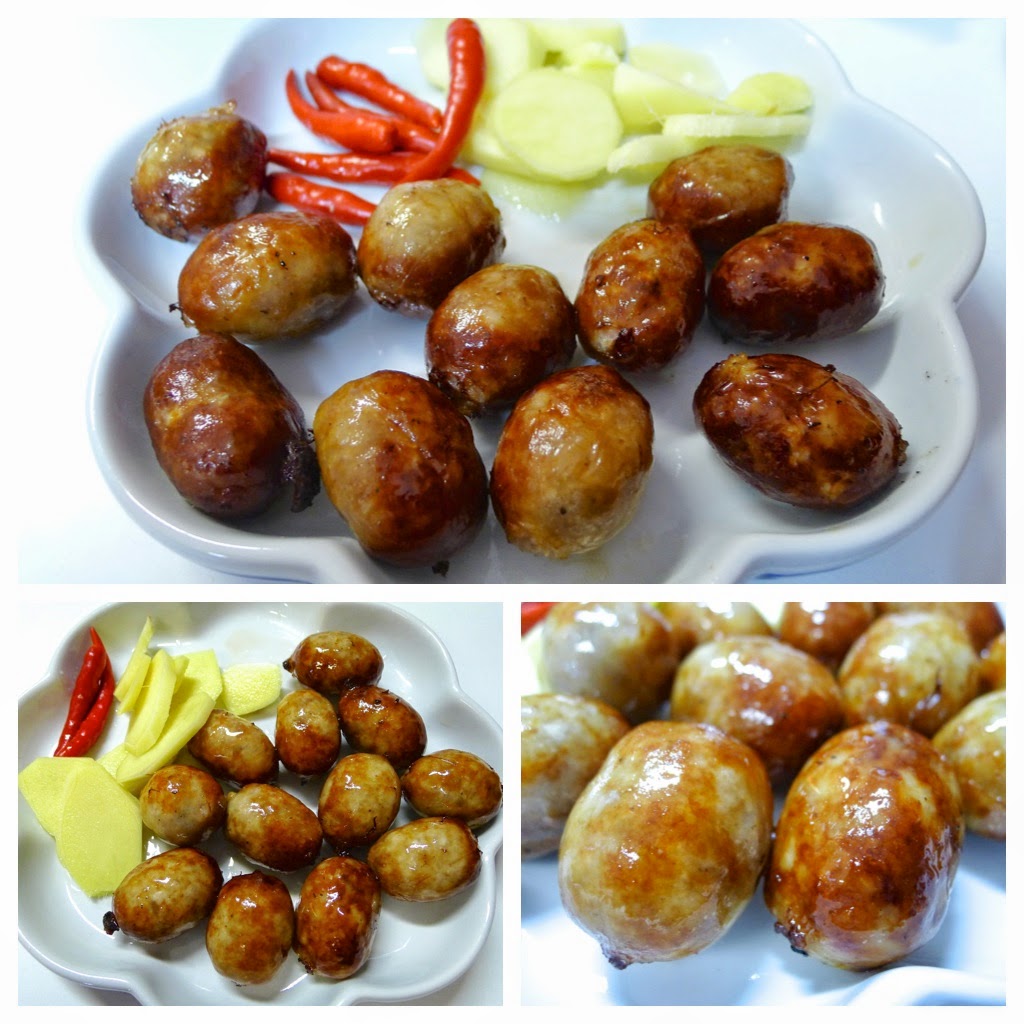 Sai Krok E-san – fermented Thai sausages with ginger, chilli, cabbage and morning glory. These delightful little sausages have a great flavour. They contain rice and are allowed to ferment for a few days which gives them a subtle sour note. If you like spicy food ask for some extra fresh chillies and eat each one with a slice of ginger and half a fresh chilli… that should keep any cold viruses at bay. 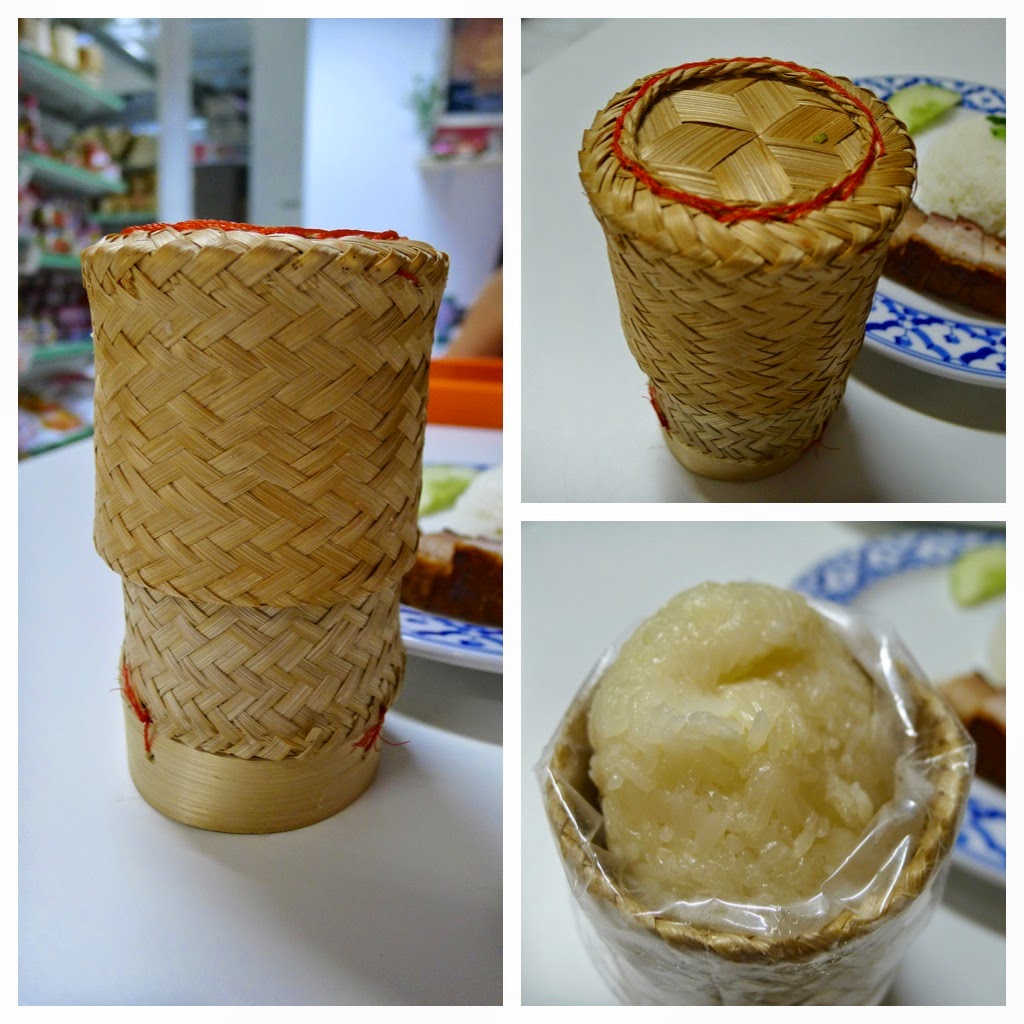 Khao niao – the Thai staple of sticky (glutinous) rice. At Siam Smiles they serve the rice in its steaming rice basket.

For me, despite or perhaps because of its rustic charms, Siam Smiles is one of the most exciting openings Manchester has had for quite some time… simply put, I’ve fallen for the place; never before have I returned to a restaurant so much over such a short period of time. I don’t suppose I will return to Thaikhun.