The Hand and Flowers – Tom Kerridge from Great British Menu’s quintessentially British gastropub in Marlow stands out for two reasons: 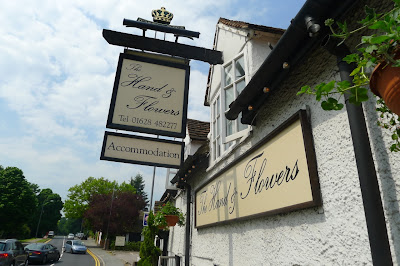 Firstly, it could well be Britain’s Campest Named Pub. 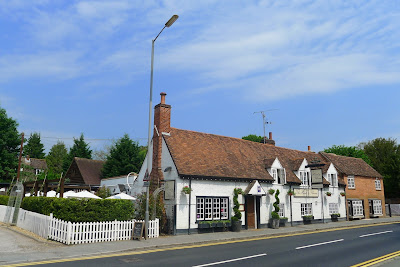 Secondly, as the only 'pub' in the world to ever be awarded two Michelin stars, it could justifiably be claimed to serve Britain’s Best Pub Grub. 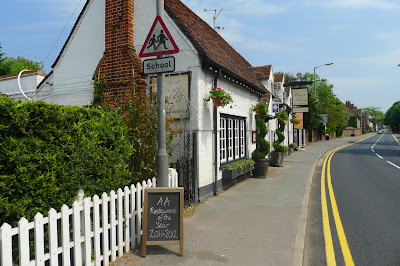 I went, hoping for the latter. 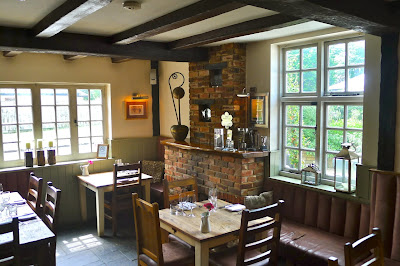 Having this accolade may be considered a double-edged sword - almost every review and blog post I've read about the Hand and Flowers seems to be comparing them to other two-starred restaurants and justifying (or not) Michelin's assertion that the Hand & Flowers is 'worth a detour' (it was) - this, I expect, must annoy the hell out of Tom and his team. 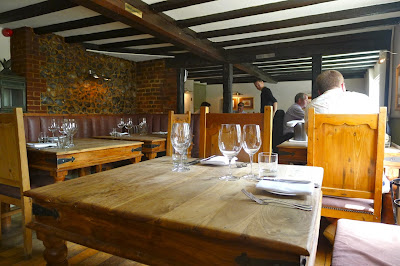 On the other hand though, the increased personal satisfaction and not to mention business that such status generates has to be worth its weight in gold. 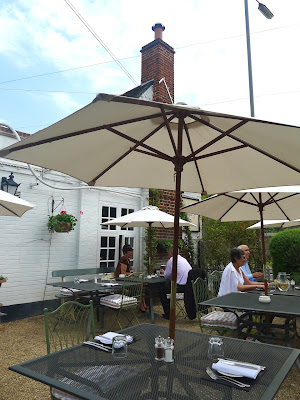 It was a gloriously warm summer’s day when I arrived for lunch. I was offered the chance to eat outside.  After eating at The Ledbury last year (another two-star eatery) I enjoyed the food wholeheartedly but regretted agreeing to sit outside, feeling that we didn't get to taste the full 'restaurant experience' - I therefore chose to stay inside. 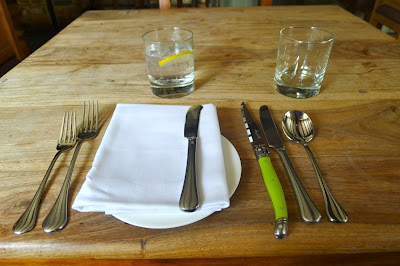 I selected the exceptional value set lunch deal, although I did supplement it with an additional starter (I had planned to have a second dessert as well but they were too generous with their breads). 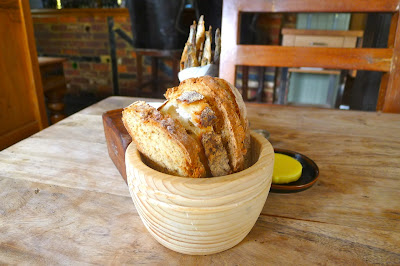 Featuring white and brown full flavoured sourdoughs, the breads were served with good quality butter and replenished when I had greedily worked my way through the first batch. 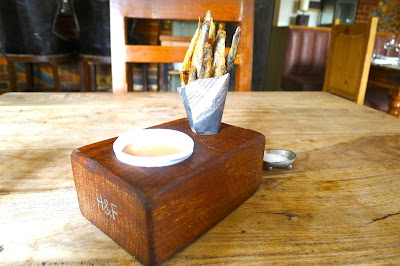 An amuse bouche set on a bespoke H&F block containing a newspaper cone of Crispy Whitebait with a delicious homemade Marie Rose Sauce arrived next. I love whitebait and these were the best I’ve had – plump, crispy, not at all greasy and seasoned well. The day’s set lunch starter featured a piping hot Cauliflower Soup with Potato Pakora and Curry Oil – as it was placed in front of me the spices wafted up and smelt delicious. The heavenly scent was backed up by amazing flavours – an excellent dish. 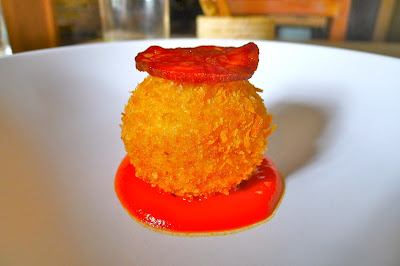 Before the main, I chose Salt Cod Scotch Egg with Chorizo and Red Pepper Sauce – the sauce was vibrant and well flavoured. The breadcrumbs were golden and crispy; the chorizo perfect; the salt fish generous and the potato ‘fishcake’ element seasoned perfectly. The only minor negative was the quail egg, which for me could’ve done with thirty seconds or so less resulting in a runnier yolk. 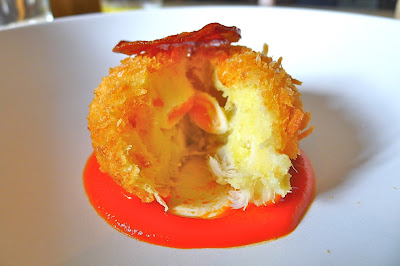 The set lunch main was, Belly of Wiltshire Pork, Spring Turnip Purée with Marmalade and Italian Leaves. The pork had great flavour – obviously a well-reared piggy. On paper I was concerned about the ‘marmalade’ but it worked well and did not overpower. I found the turnip purée a little runny but the remaining elements were all cooked well. 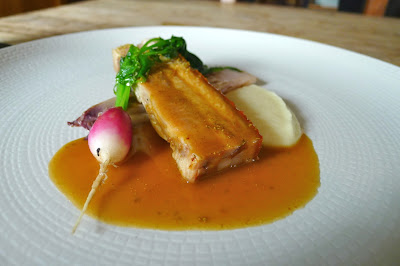 As a side, I couldn’t resist the Salt Baked Potatoes with Garlic and Parsley Butter that I remember seeing Tom create on the Great British Menu – good potatoes, good butter made great through theatre. 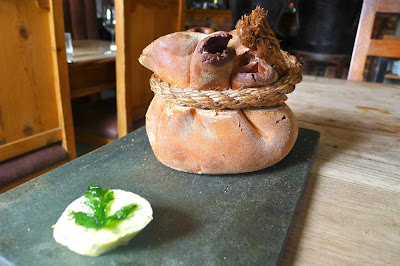 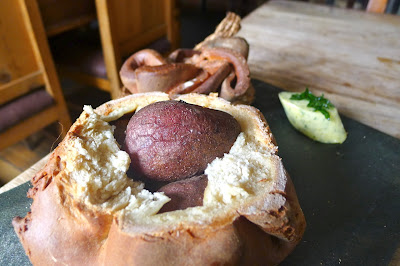 To take advantage of the sunshine, I opted to take my dessert and coffee in the 'garden' (sectioned off graveled area, adjacent to the car park). Whilst it was pleasant enough being outside, this was more to do with the weather than the enjoyment of the space. 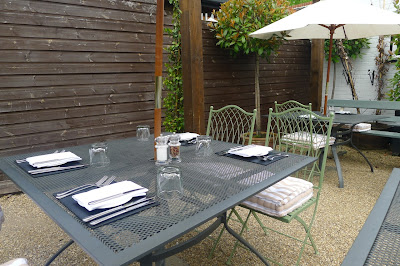 Eating in pub gardens is often enhanced by such features as a bubbling brook or watching squirrels scampering up trees - sadly The Hand & Flowers has neither. Not their fault, I know... but when reading about an experience some may expect these things... I know I did - the curse of the 2-stars, unfairly building an expectation of the ‘perfect pub’ beyond perfect food? 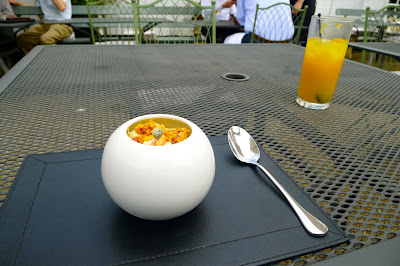 Dessert was a Rhubarb Fool with Pistachio Ice Cream and Ginger Meringue – the ginger meringue with its honeycomb-like appearance was the real surprise element of what was otherwise a fairly ordinary yet pleasingly summery dessert. 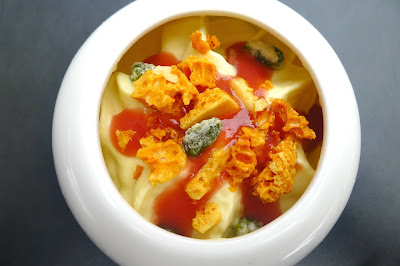 I wish I had room for an additional dessert as the Passion Fruit Soufflé with Kaffir Lime Ice Cream and Warm Toffee had caught my eye but I had stopped for lunch as Michelin had advised as part of a detour on my way back from London to Manchester – that extra dessert would’ve made for an uncomfortable drive up the M40. 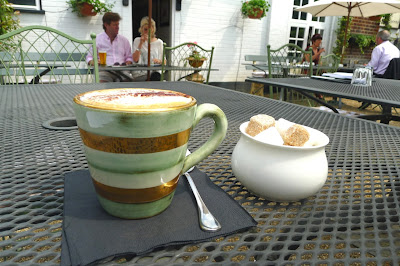 Instead I ended with a freshly squeezed juice and a cappuccino – I’ll be making that ‘detour’ again. I may even make a ‘special journey’ and take my wife down to stay the night in their The Charolais Suite (complete with ‘jacuzzi terrace’).