Young Turks at The Ten Bells

For those not in the know, the ‘The Young Turks’ are an über-trendy collective of supremely talented young chefs, namely: James Lowe, Isaac McHale and Ben Greeno (now at Momofuku Seiobo). Since coming together in 2010, they have collaborated on various projects and pop-ups, mainly in and around London (as well as some solo projects and one offs). 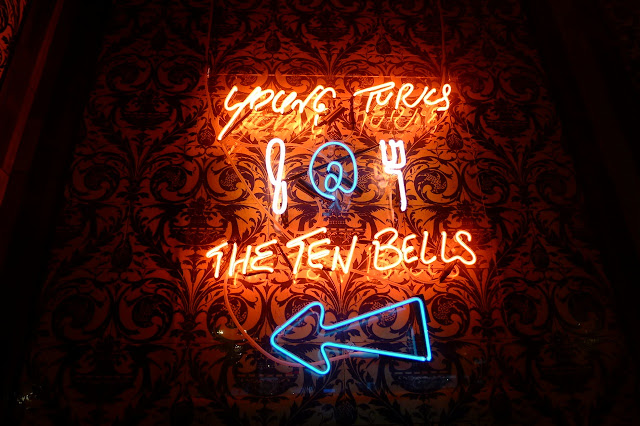 Between them they have worked and staged at some of the best and most exciting restaurants in the world, including: The Fat Duck, St. John Bread and Wine, The Ledbury, River Café, Momofuku Ssäm bar, Marque, Mads Reflund, Tom Aikens, The Paul, Sat Bains and Noma to name a few… 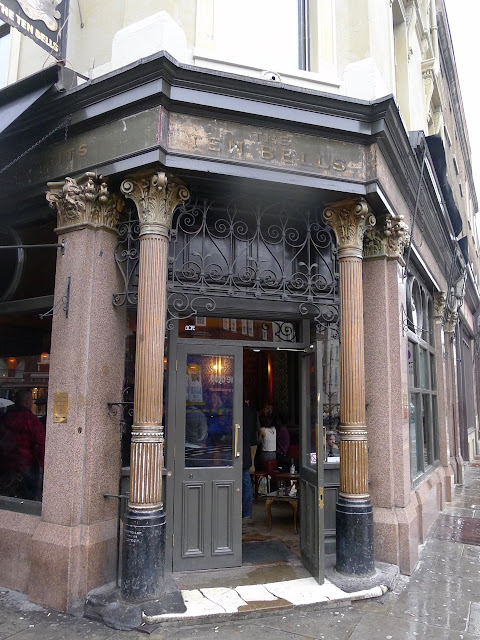 With the culinary world seemingly their oyster, the ‘Young Turks’ have been branded the ‘Future of British cooking’ – reviews and write-ups of their events are littered with adjectives hailing their ‘underground’ ‘cool’ ‘modish’ ‘edgy’ and ‘hip’ cooking. 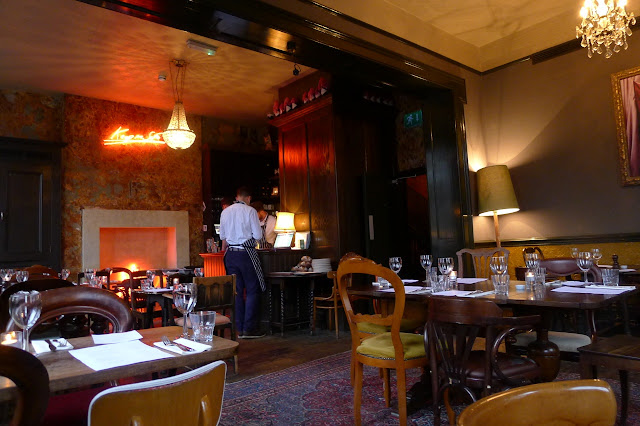 I first met James Lowe at the 'Aumbry Fat Duck reunion' (see here) just before The Young Turks were set to open at The Ten Bells for a three month pop-up. Excited by what they had planned and wowed by James’ dish at Aumbry, I promised him and myself that I’d get down to London before they finished their stint in the iconic pub – a man of my word (helped out by the run lasting 6 months instead of 3) I managed to squeeze in on their last supper. 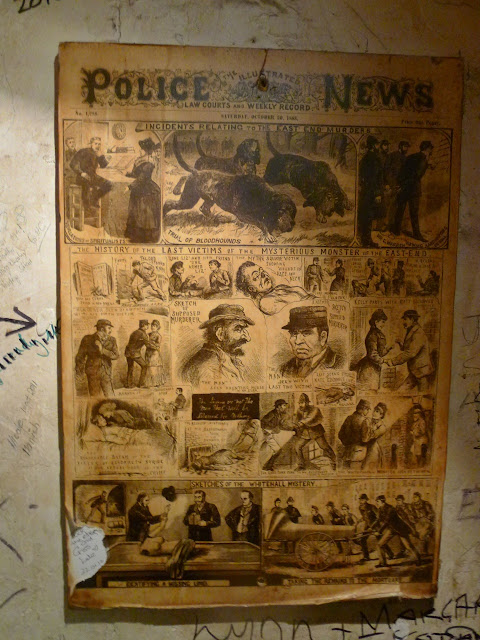 The Ten Bells pub on Commercial Street has had a long and chequered history: apparently Jamie Oliver’s Great Grandfather was the landlord during the 1880s but it is perhaps most famous for its association with two of Jack the Ripper’s victims. With its ‘original’ signage and Victorian tiling, thanks to a combination of neglect and sympathetic restoration, the pub itself has changed very little over the years. 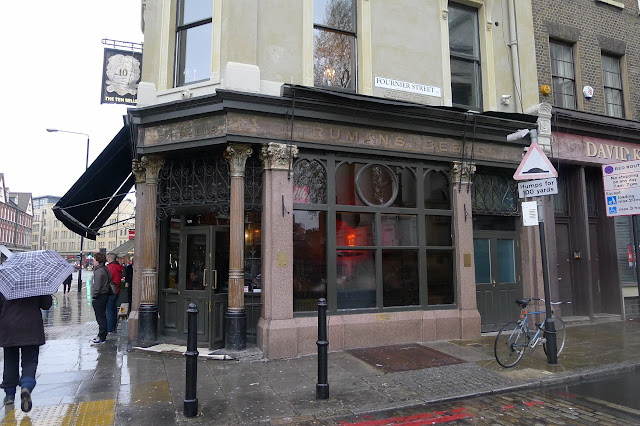 The surrounding streets however have gone through quite a renaissance since I last visited. I couldn’t believe how much regeneration has gone into the place. Some 15 years ago, when I worked down the road at Sedgwick insurance, the main reason for visiting the area at night was for a Brick Lane curry, beigel or brass. Now, thanks to a revitalised Old Spitalfields Market and its environs the area is once again booming. 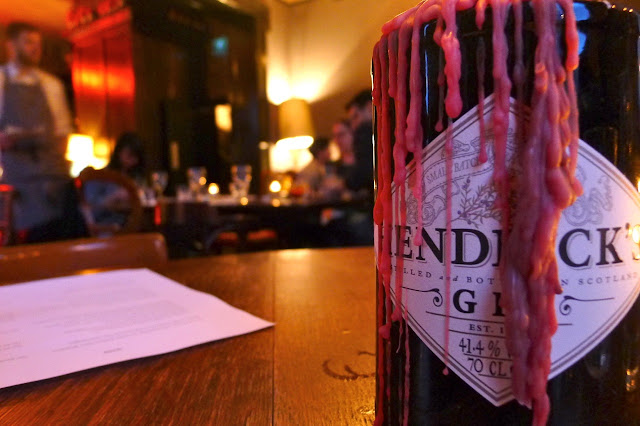 Although originally from south of the river, visiting the Ten Bells, I found if difficult not to romanticise about that part of London. Set to the soundtrack of ‘Consider Yourself’ from Oliver, the East End has a special spirit that even the doodlebugs dropped by the ‘jam bun’ (hun) couldn’t break.

Cheery market banter; barrel organs; music halls; leaving your doors unlocked; gathering round the Joanna for a good ole’ cockney knees-ups; pie ‘n’ mash; jellied eels; the occasional brutal murder; workhouses; opium dens; brothels and fond memories of the Krays with lines such as, ‘Salt of the earth those boys!’ and ‘They only hurt their own!’– the East End has it all!

One time, parked up with my friends Sally and Simon, watching the comings and goings of the local streetwalkers whilst enjoying a Salt Beef Beigel and some winkles from Tubby Isaac's, we noticed a police van circling. Expecting to see a live episode of The Bill unfold before our eyes with a bust on the curb crawling activities, we were a little taken back when the blue lights pulled in behind us and before we knew it a rozza had us up against a shuttered shop – all a big misunderstanding, how we laughed!

Enough about my past, let’s get back to the ‘Future of British cooking’. 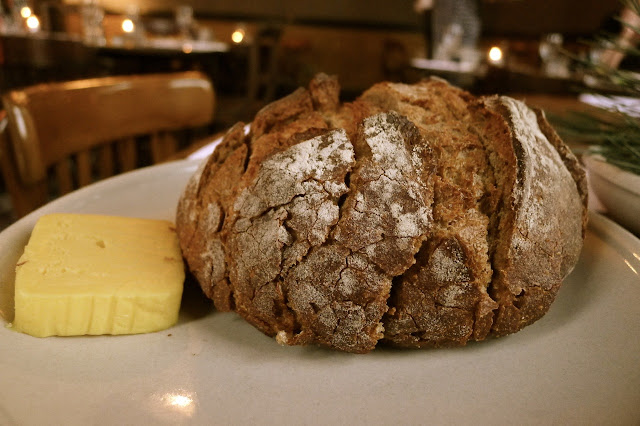 Sourdough & butter – I love sourdough and this was amongst the best I’ve tasted… nuff said. 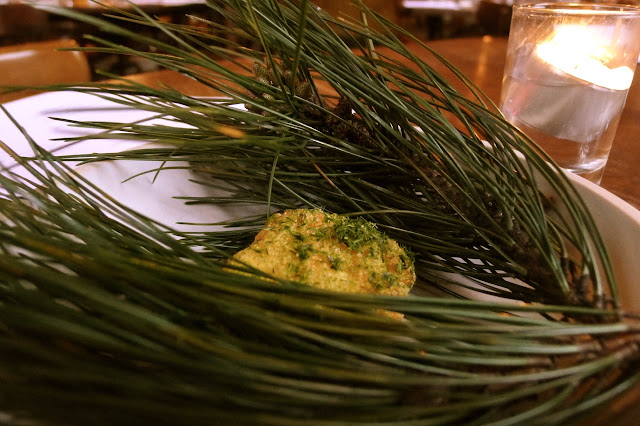 Served nestled in amongst aromatic pine needles, the Buttermilk Chicken & Pine Salt was quite simply the best chicken nugget I’ve had in my life. I remember having rabbit coated, cooked and served in a similar way at The Ledbury (see here) – obviously linked to the time Issac spent there as development chef alongside Brett Graham. 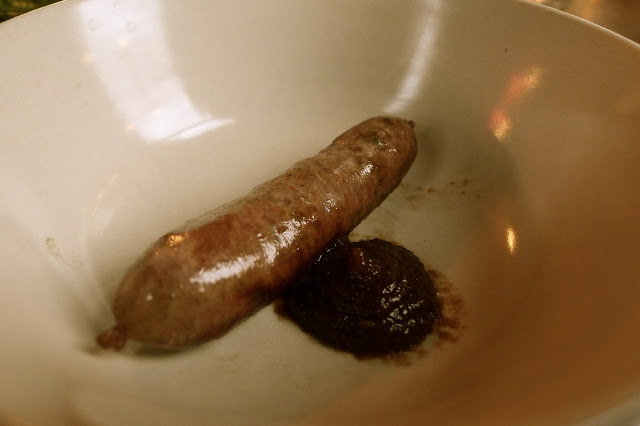 Pigeon Sausage & Chutney - when you are served a sausage, you can’t help but think, “Oh… it’s just a sausage!”

It also made the think what Andoni Luis Aduriz and the team from Mugaritz (in town to promote their new book and celebrate being voted the World’s Third Best Restaurant and winning the ‘The Chefs’ Choice Award 2012’) thought the night before when they had chosen to eat The Young Turks food over all the Michelin starred restaurants in the city, when they too were served a sausage…  I imagine they thought, “Ah, es solo una salchicha!” 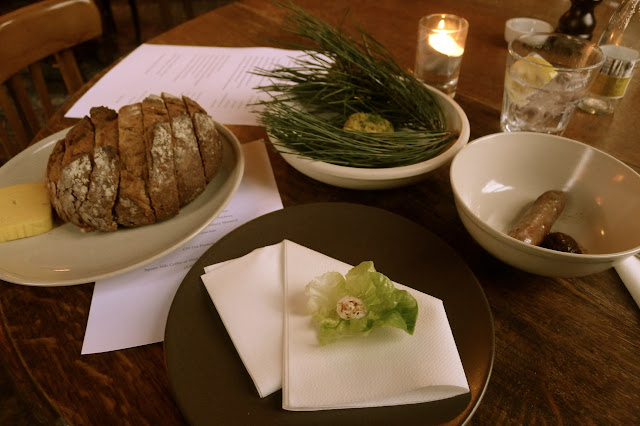 But it wasn’t 'just a sausage'… no wait, it was, but filled with pigeon livers and meat and spices and who knows what other goodness, it was the single most tastiest, most cantankerous, ruffneck, rudebwoy sausage I’ve tasted in my life! 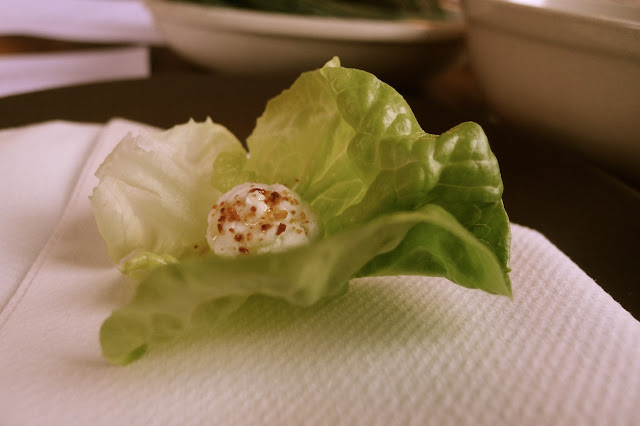 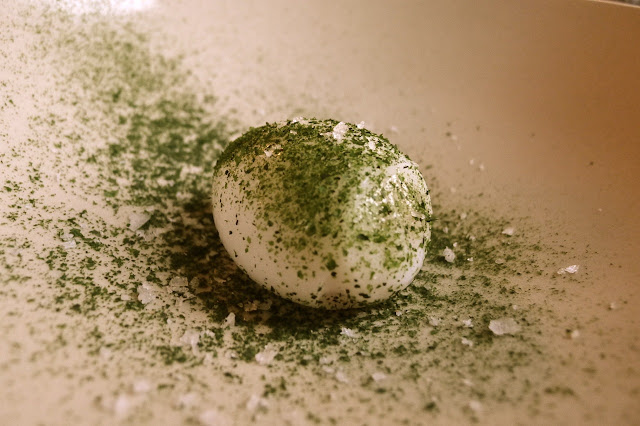 Extra course: Up until now, I was a Gull’s Egg virgin. As James brought the dish to the table he explained how the egg had been cooked at a low temperature before being showered with finely powdered dehydrated celery and a Maldon made seaweed salt. They are apparently one of the most expensive eggs you can buy, having a short 3-week season and requiring to be hand collected by specially licenced ‘eggers’.

It is said that the yolks are a ‘stunning bright orange’ but I did not get to see this because as instructed, I took a quick snap and popped it in whole, whilst still warm – it had a rich, creamy texture and tasted wonderfully indulgent. They say ‘eggs is eggs’ but it was great to be able to try a rare and premium product – something I’ll definitely be keeping an eye out for during the next short lived season. 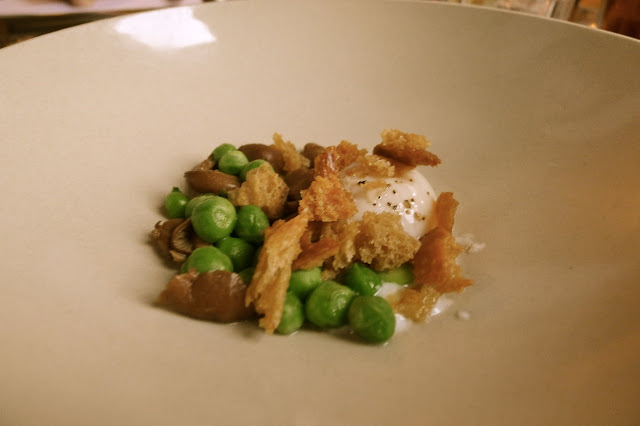 Pheasant Egg, Venison Broth & Peas - whilst the gull’s egg was a first for me, on account of the fact that I keep chickens (just 3) and refuse to buy hen’s eggs (as they won’t be as good as my own) I will occasionally supplement my ‘harvest’ with duck, goose, guinea fowl or pheasant eggs. 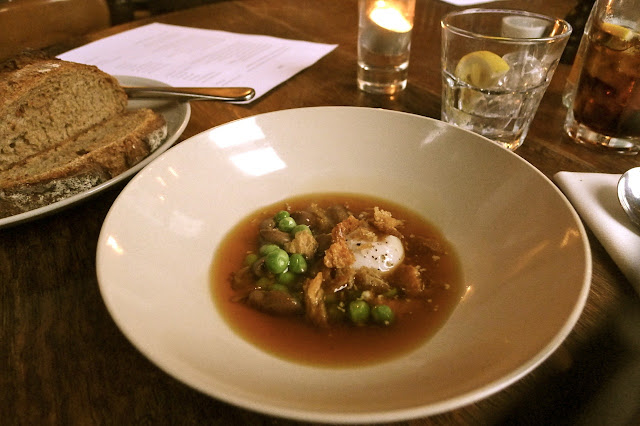 Slow poached, the egg was terrific; as were the peas, shimeji mushrooms, wild garlic and croutons… a dish like this is always made or broken by the quality of the consommé – this was sublime; first class cooking. 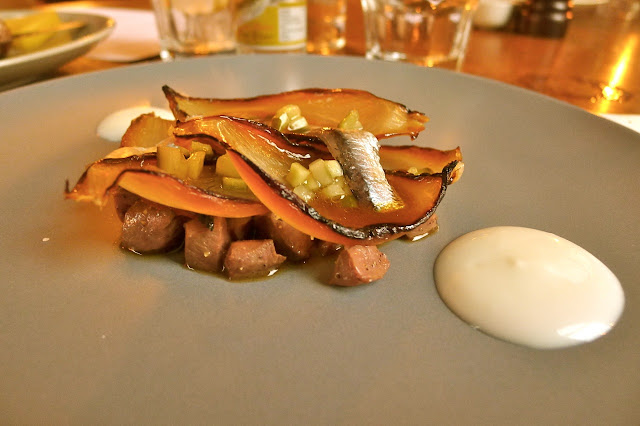 Lamb’s Heart, Grilled Onion & Anchovy – another top drawer dish; the heart had been flash fried retaining wonderful flavour and texture. Further smacks of flavour came from smoked cubes’ of lamb’s fat and the home marinated anchovies. The sheep’s milk yoghurt added another dimension, whilst tempering the smoke and richness. 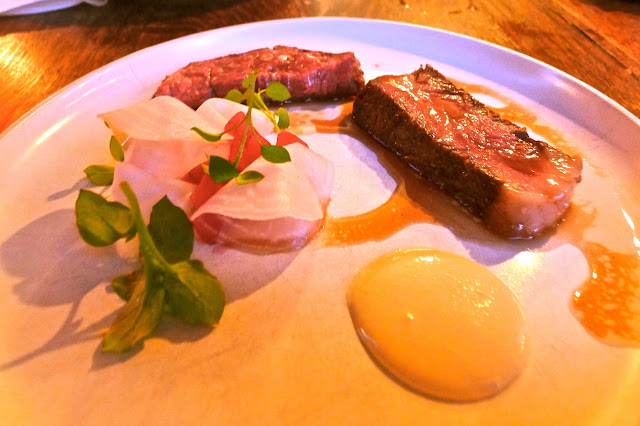 Dexter Rib, Beetroot & Tewkesbury Mustard – it’s not often I swear on this blog, in fact I don’t think I ever have before, but sometimes niceties are not good enough, simply put this beef was ‘off the fucking hook’ – hung for seven weeks, it was unquestionably some of the best British beef I’ve ever tasted. 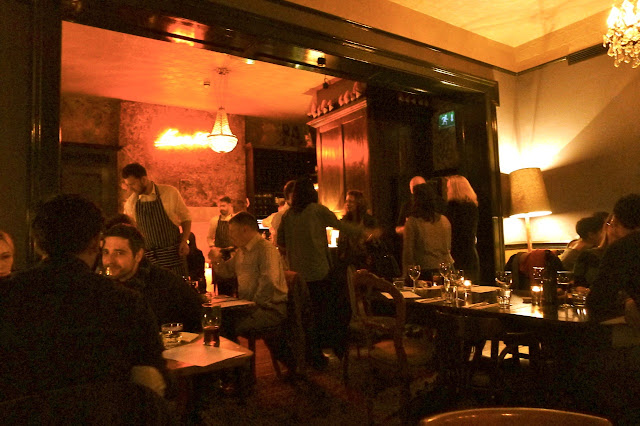 As the night got darker and the place got busier, the candlelit room really came alive. The noise levels were high and the atmosphere buzzing…

One downside was the failing light for photographs; made worse by the fact that I happened to be sharing a table with one of the best food and chef photographers in the world, Per-Anders Jörgensen and his wife Lotta who together publish the cutting edge food magazine ‘Fool’ (see here). 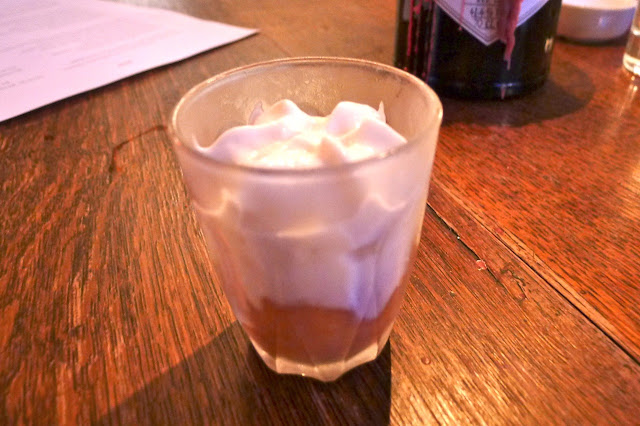 Me and my point-and-click camera therefore apologise for the poor quality photographs of the pre-dessert and palate cleanser, Ginger Fizz. 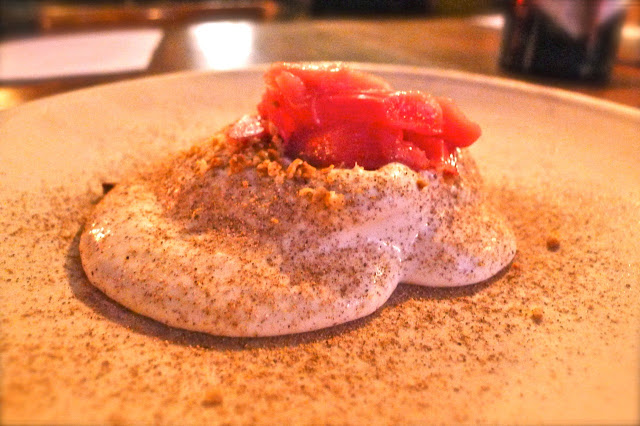 Rhubarb Cranachan – a great variation on the Scottish classic. A lovely creamy dessert with tartly sweet rhubarb compote enlivened by a sprinkling of honey biscuit. 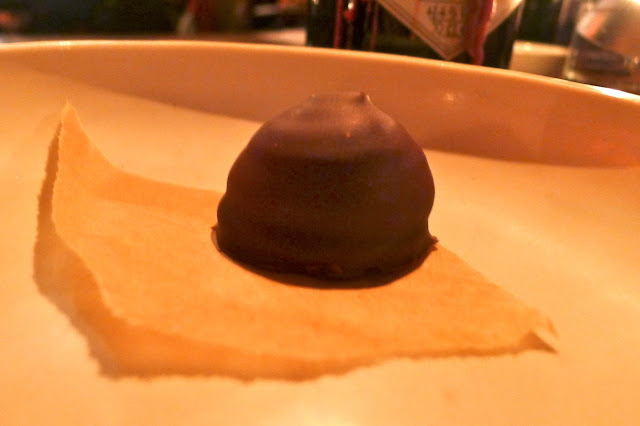 The petit four consisted of what my wife would call a ‘Chocolate Tit’ but what the YT call a Beremeal Teacake – spot on with the fresh mint tea.

Usually, at this point, after sharing such an enjoyable experience I’d urge you to go. Sadly however, as mentioned before this was the last night of the Young Turks at The Ten Bells.

In true boy-band style, the collective are taking 'some time apart to work on solo projects.' I’m sure they’ll work together again… in the meantime, I’m eager to see what James and Isaac (and the rest of the ‘Clove Club’ crew) do next… watch this, or any hip and happening spaces, because you never know where they’ll pop-up next.