For Olympic, jubilistic and potentially apocalyptic reasons, 2012 promises to be an important year. A hundred years ago 1912 was also significant: the Republic of China was formed; Captain Scott and his team reached the South Pole; the 268 year old Qing Dynasty came to an end and the Titanic sunk. 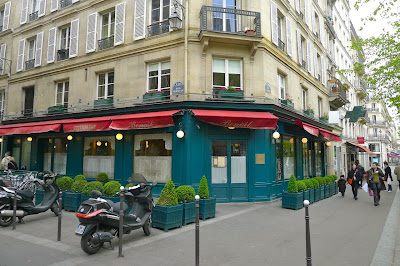 On a foodie note, Polish biochemist Casimir Funk identified vitamins; US pharmacist, Wilbur Scoville, devised the ‘Scoville scale’ to measure the amount of capsaicin in chillies (a heat determiner) Julia Child was born and Benoît Matray opened his Parisian bistro.

Having been passed onto his son and grandson, Benoît with its grand Belle Époque décor remained in the family for 93 years. When the Ducasse group took over in 2005, they did so with the proviso that the name lived on and the Michelin starred standards were maintained (standards that prompted Paul Boscue to proclaim it his favourite Parisian restaurant). 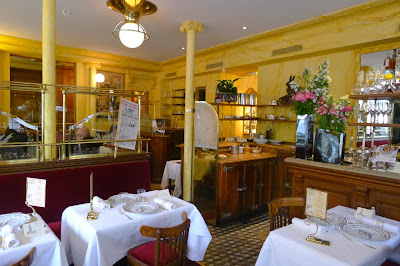 In 2003, having taken over Aux Lyonnais, which opened in 1890 (and more recently with Rech) Alain Ducasse has proven experience in ‘reviving’ and ‘preserving’ iconic eateries. With Benoît, not only has Alain Ducasee lived up to his promise, the Benoît name and spirit has also been honoured with sister restaurants in Osaka and New York. 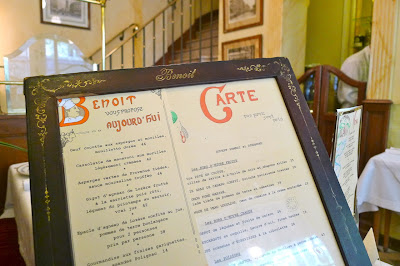 Having enjoyed ours meals and experiences at Alain Ducasse’s Le Jules Verne (see here) and Alain Ducasse at The Dorchester (see here) we could not pass up an opportunity of going on during the 100 year anniversary and were lucky enough to book a last minute table. We selected the exceptional value, €36 set lunch. Great value for a three course, Michelin starred lunch. 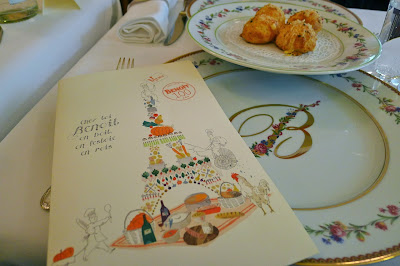 I love gougères, they are easy to bake and a bowl of them always goes down well at dinner parties, barbeques or other assorted soirées. Whilst I do like to experiment with other different flavour combinations, Alain Ducasse’s classic Gruyère Gougère recipe is readily available online and is one of the best. 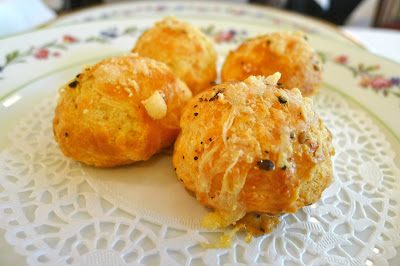 At the 3-star Alain Ducasse at The Dorchester we received a huge bowlfull between two, in Benoit there was just four gougères to share – but they were no less delicious. 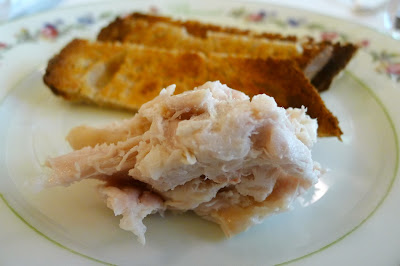 Made to a classic recipe from the restaurant’s 100 historic repertoire, the amuse bouche was Rillettes de lapin, pain de champagne toasté – top quality rillettes made with quality bites of rabbit - simple, classic, delicious. 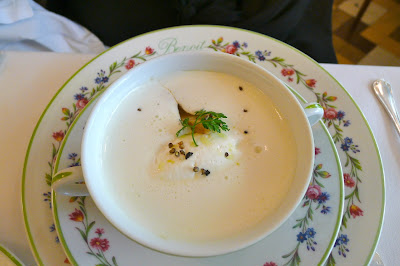 Cauliflower and soup are two of my wife’s favourite things, so the ‘crème du Barry’ or Velouté Dubarry, croûtons dorés as the menu called it was eagerly chosen by her – a wonderful example, perfectly seasoned, smooth and creamy. 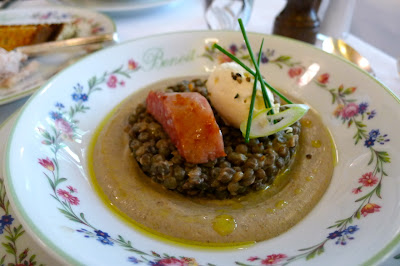 I selected the hearty, Lentilles vertes en salade, saucisse fume tiède et crème moutardée – another classic dish that was impossible to fault. Each component, from the lentil salad to the mustard cream was well cooked and flavoursome. The sausage was sublime. 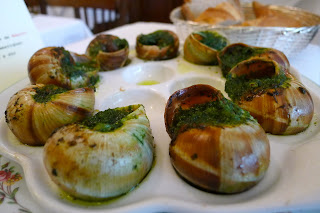 To supplement my set lunch, I also ordered 9 escargot en coquille, beurre d’ail, fines herbes for €19. I adore snails and despite having had them at a couple of places during the trip could not resist the chance to sample the snails in Paris cooked to Alain Ducasse’s standards. They were extraordinarily good – plump and swimming in herby garlicky butter that was soon mopped up with the fresh baguette. 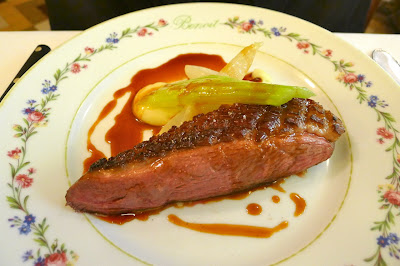 My wife’s choice of main was, Magret de canard poêlé, céleri et navets fondants, sauce bigarade – the duck breast was fried to perfection (no fancy sous vide techniques needed) as was the celery and turnip ‘fondant’. The quality of the classic bitter orange ‘sauce bigarade’ was worthy of the Michelin star alone. 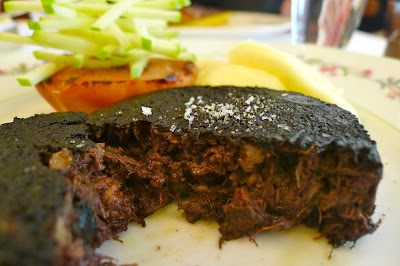 For my main, I plumped for the Tranche de boudin noir rissolée aux deux pommes. Living in the North West of England, I get to eat a lot of Bury black pudding dishes. French ‘boudin noir’ is different in that there is generally no cereal (although there are regional differences) that results in a much smoother offering.

Served with the classic French combination of apples (fresh and roasted) and creamy mash, served just the right side of gluey. The French Confrérie des Chevaliers du Goûte Boudin (Brotherhood of the Knights of Blood Sausage Tasting) would be very pleased, I’m sure. 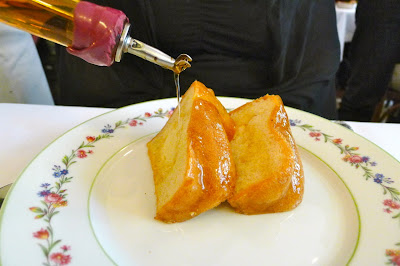 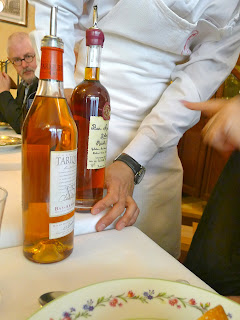 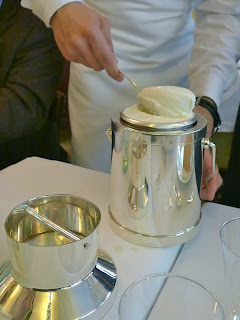 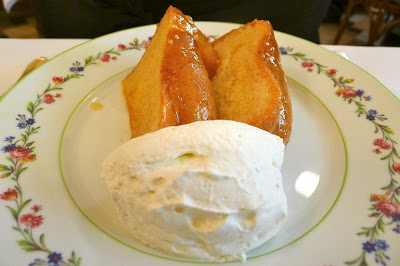 Having enjoyed it so much few days before at Alain Ducasse’s Le Jules Verne in the Eiffel Tower (see here), my wife selected Savarin à l’Armagnac Château du Tariquet, crème fouettée – here, the whipped cream was served theatrically from a shiny silver milk churn, that drew a few, “Oooh”s and “Aaahs” from other diners. 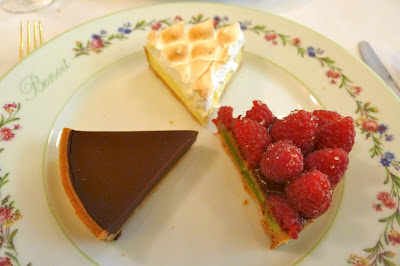 I was spoilt for choice so in the end I hedged my bets and opted for the Assortment de tartes au chocolat ou aux fruits de saison – whilst the chocolate tart did not compare to the one I had eaten the day before at Passage 53 (see here), it was still very, very good. 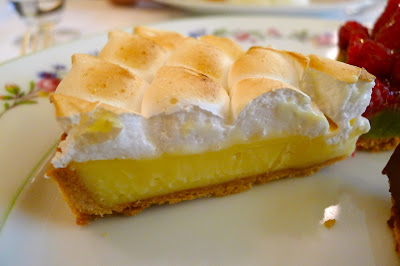 The Raspberry and Pistachio Tart was also good. The Lemon Meringue was the best I have had! After some delightful petit fours, a quality coffee and exquisite madeleines – a great experience made all more the magical by the 100 year anniversary connection. You’ll be hard pushed to find one star classic French cuisine done better – especially in such a wonderful and historical setting. 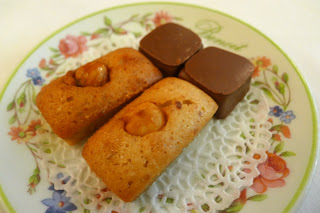