Picture the scene: Japan, some 200 years ago; deep in a forest of hinoki (Japanese cypress) trees, a seed cone came to rest in lush, fertile soil. At the beginning of its life the young, slow-growing sapling would have had plenty of time to consider its destiny - with its beautiful rich, straight grain and soothing lemony fragrance maybe its future lay as a hinoki bathtub; a masu; a hangiri; the stage of a noh theatre or even be part of a palace, temple or shrine? 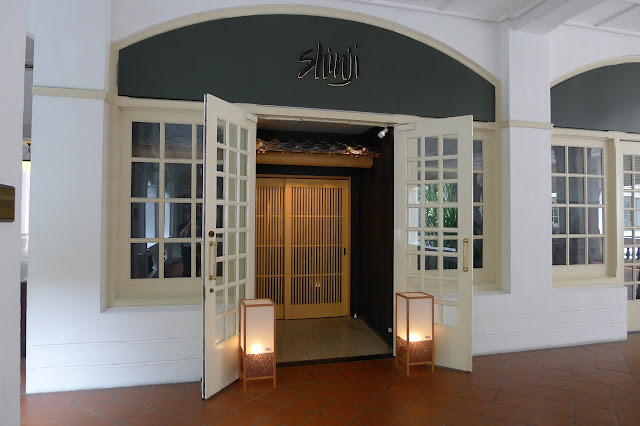 Like many of its kind would have hoped to grow big and tall - perhaps one day standing proudly with a trunk spanning one metre across and reaching a grand height of 35m. Little would the tree have known that one day an architect would receive a phone call prompting him to drive for four hours. An architect charged with finding the perfect piece of wood from which to carve a counter for two-Michelin-starred chef Shinji Kanesaka’s fine Edo-mae style restaurant in Singapore’s prestigious and historical Raffles Hotel. 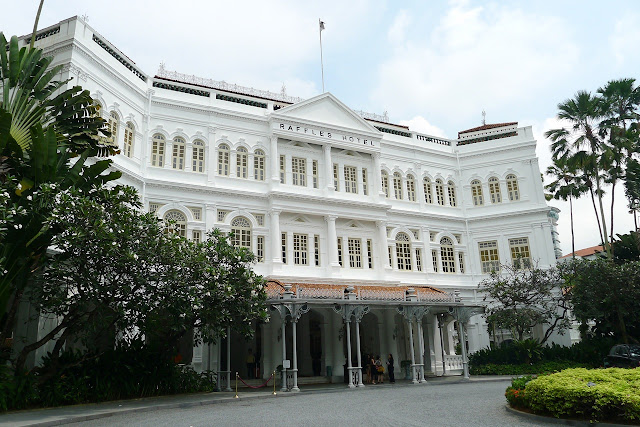 Whilst it could be argued that the Raffles’ Long Bar (the home of the Singapore Sling) has become little more than a tacky thing to tick off on the typical tourist's list, other parts of the Raffles hotel maintain the standards and quality that established the name amongst the most famous hotels in the world - where more fitting then, for Shinji Kanesaka-san, as one of the most highly respected and decorated sushi masters to open his first and only restaurant outside of Japan? 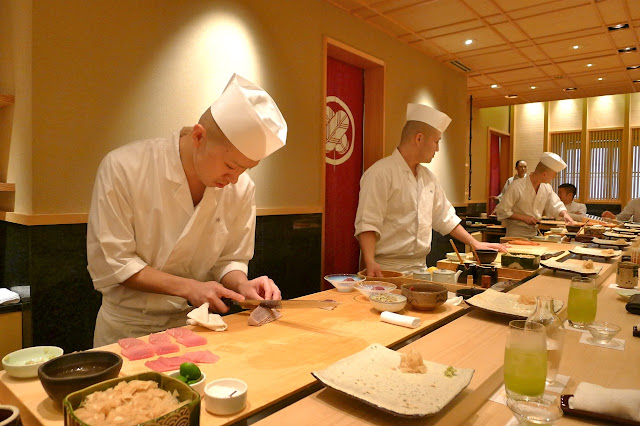 Shinji by Kanesaka at Raffles Hotel is considered by many as one of the finest sushi restaurants outside of Japan; and having needed eighteen men to lift the fine hinoki wood counter into position, the exquisite tree now takes centre stage in a restaurant so authentic, the maitre'd likes to tell the story of how a Japanese expat once broke down in tears upon entering because it reminded him so much of home. 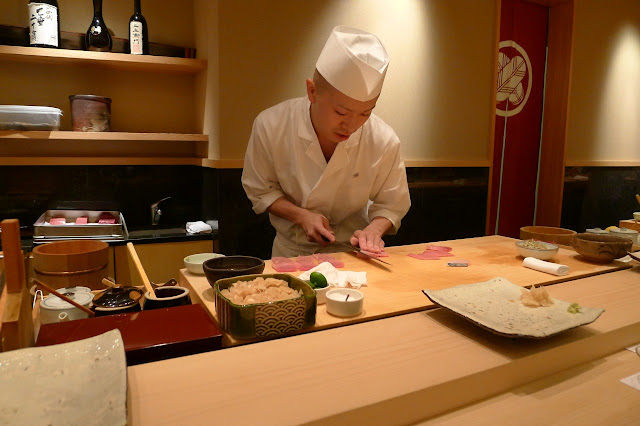 At the time of writing, Shinji Kanesaka’s empire oversees establishments with a total of seven Michelin stars between them. (Not including, the three-Michelin stars held by his former protégé Saito-san at Sushi Saito which rumour has it is also part owned by Kanesaka). A number of people in Singapore (who know better than me) told me that the Shinji branch in Singapore is equally as good as the Ginza original. 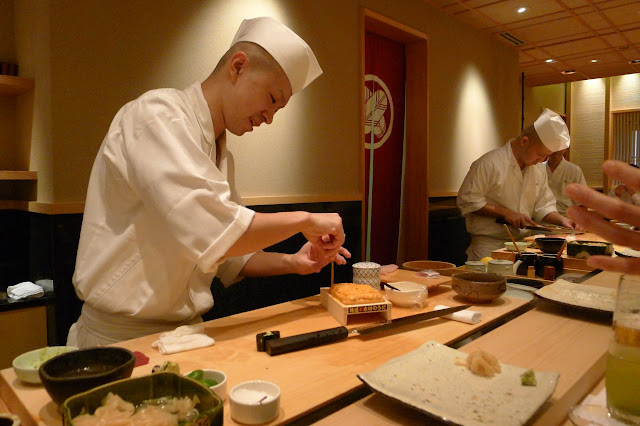 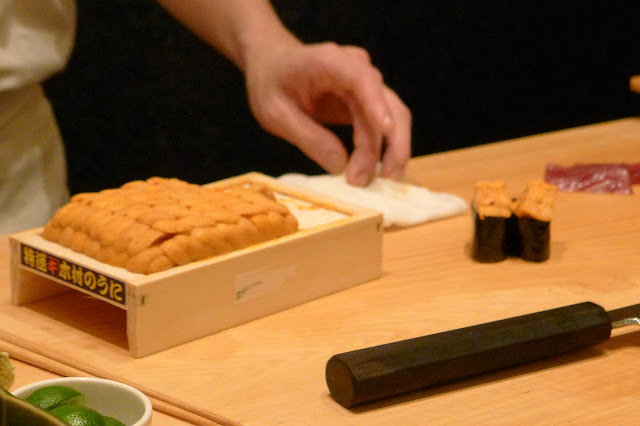 We opted for the nine piece ‘Hana’ Setsugetsuka Sushi Set Lunch. Used to describe something of serene beauty ‘setsugetsuka’ translates literally as ‘snow, moon and blossom’ and comes from a poem by Bai Juyi. Our meal certainly was beautiful – if ever there was an argument for quality over quantity, this could be it. 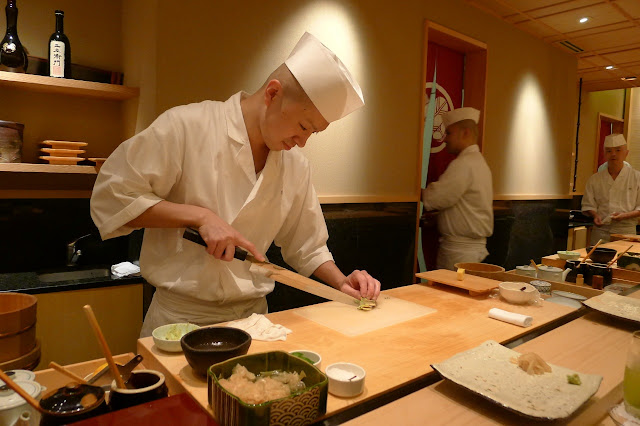 Although similar in décor, size and set up to Aoki (see here) the atmosphere is immediately very different. The chefs interact more with the customers and have fun whilst still managing to turn out piece after piece of perfectly precise sushi. 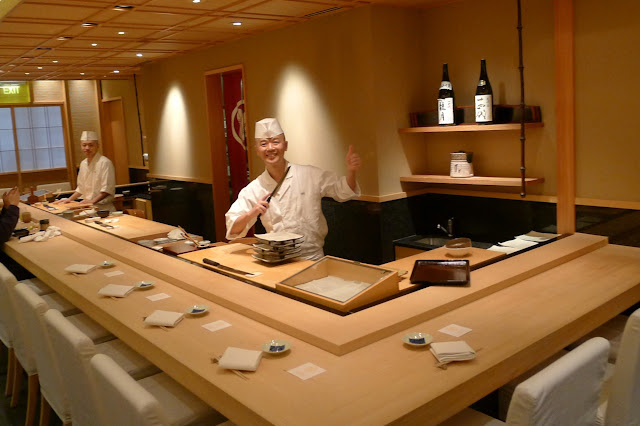 My stepson (who joined my wife and me) and had previously been for the full blown omakase menu (complete with ‘Fugu’ / Pufferfish) during which the chefs apparently all appreciated sharing a good few glasses of sake with the guests – although our lunch budget did not stretch to this on this occasion the chefs still seemed in a party mood: laughing heartily and posing for pictures. 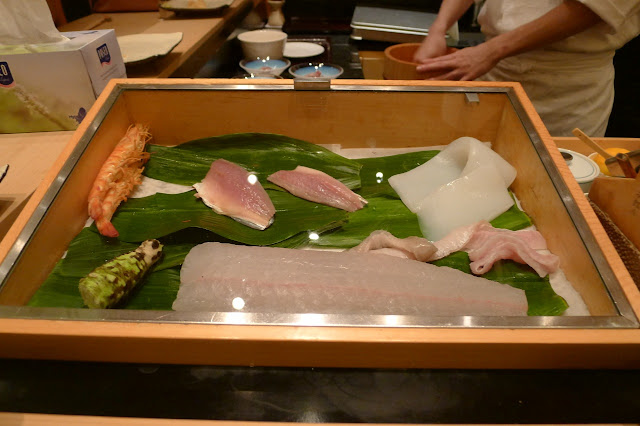 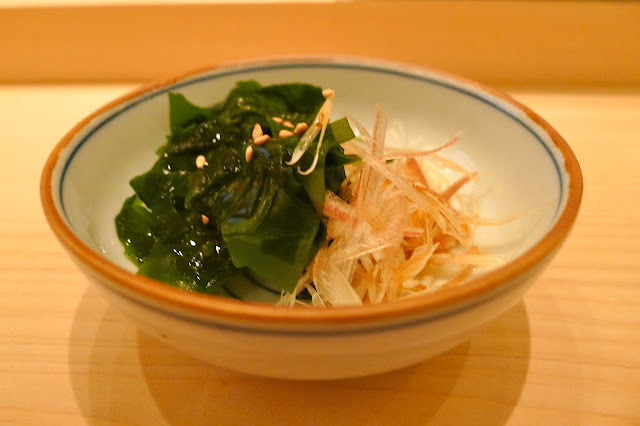 The hana set started with a bowl of seaweed with shards of finely sliced ginger – wonderful clean fresh flavours. Seven nigiri followed – each was served individually (as opposed to on a platter). 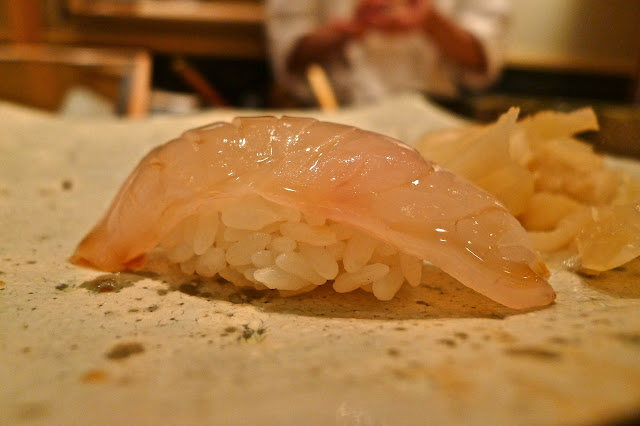 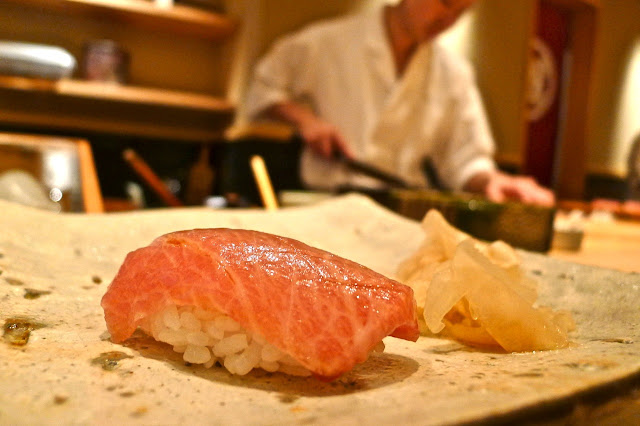 Up next was the Otoro (Full Fatty Tuna) – lightly brushed with Shinji’s soy sauce and spiced with freshly grated wasabi root. Quite simply the best, softest and creamiest piece of tuna I’ve ever tasted. 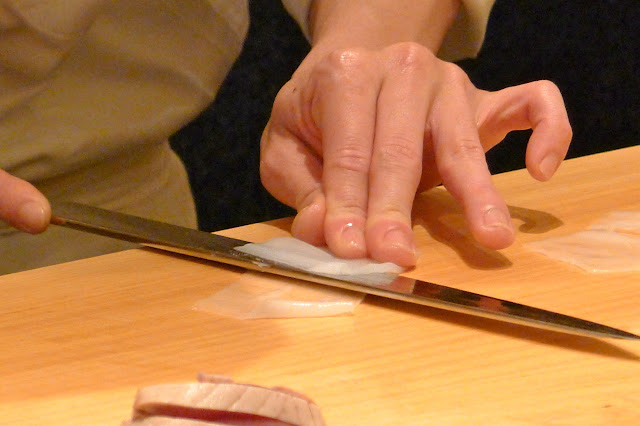 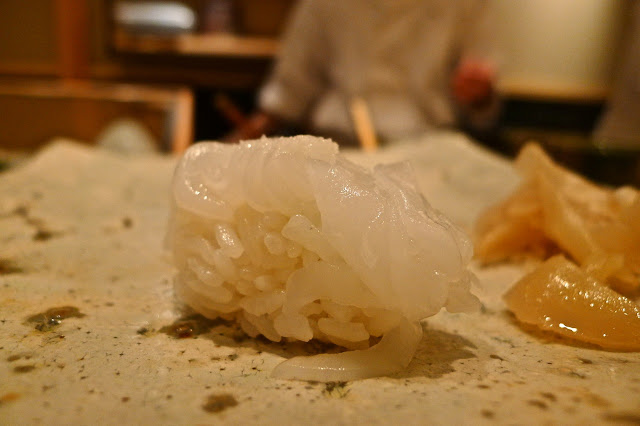 Whilst eating the otoro we watched the itamae-san cut the thinnest possible slither of Ika (Baby Squid)which he then shredded before twisting like spaghetti onto rice – it was firm and chewy and tasted divine. 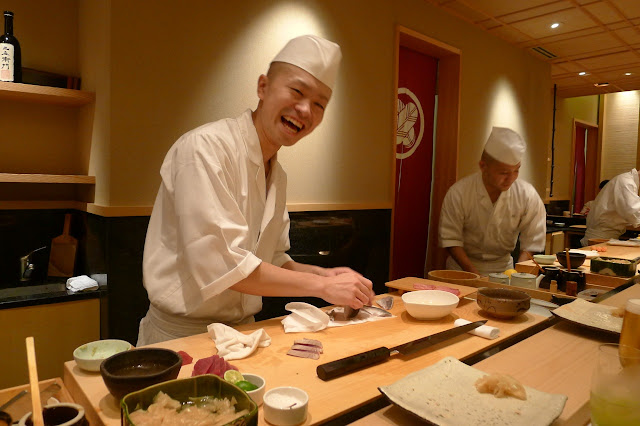 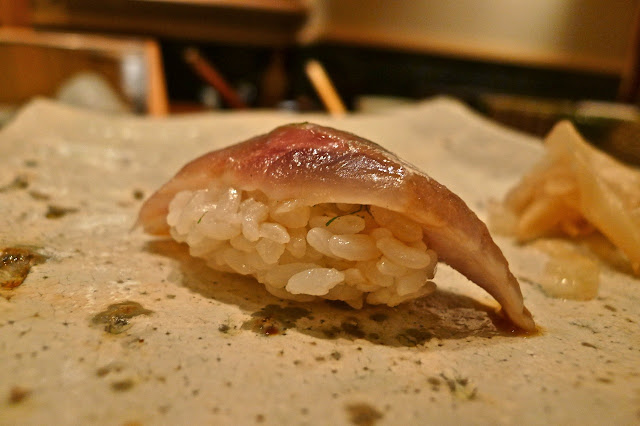 Not to be confused with Saba (Mackerel), the next piece of nigiri was Aji (Horse Mackerel) with just a faint hint of skin left on, this was my favourite of the set. 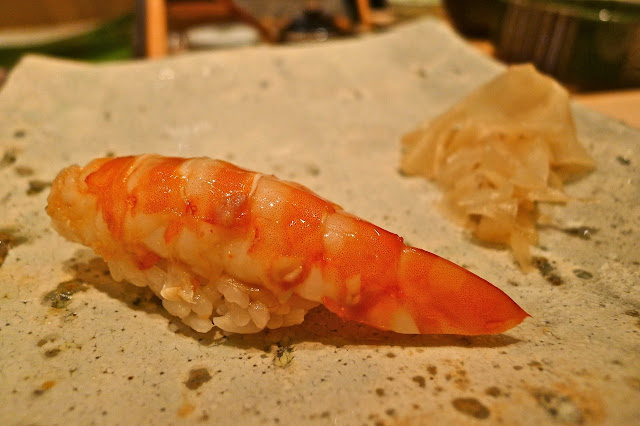 Arriving next in all its glory was a sweet, succulent Kuruma Ebi (Japanese Imperial Prawn) – heavenly! 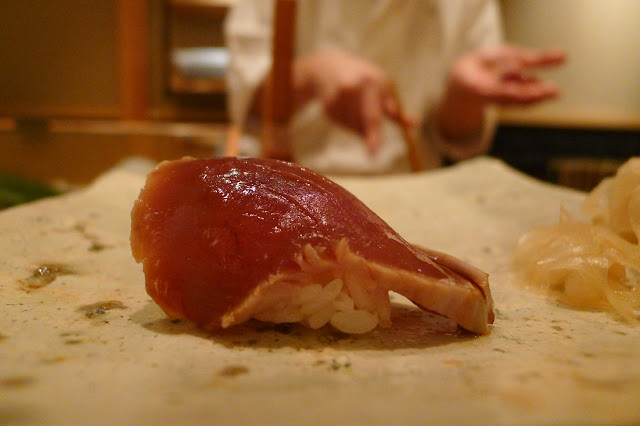 Having been seared around the edges, Katsuo (also known as Slipjack Tuna or Bonito) came next – what it lacked in texture and creamy, fattiness from the other tunas, it certainly made up for with its deepest flavour. 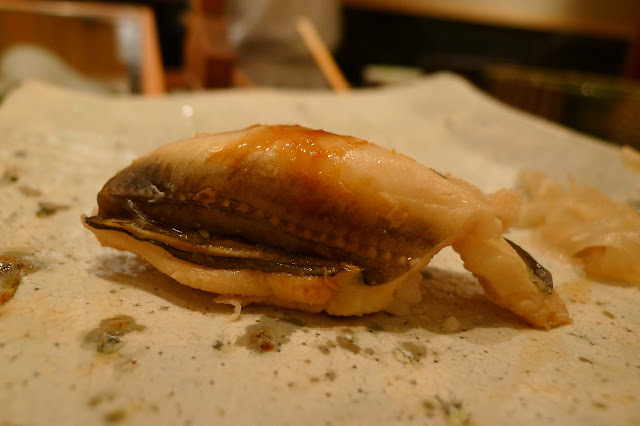 Next to be presented was the Anago (grilled Sea Eel or Conger) - with my cockney roots, eels have also been a favourite, whether jellied of served with sushi. This was a world away from the Unagi (Freshwater Eel) from packets that is more frequent in the UK – dressed lightly with a glaze of sweet soy, it was soft and yielding and seemingly melted on the tongue. 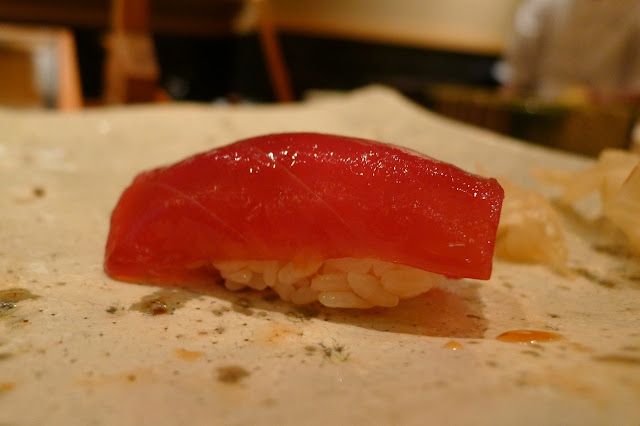 After watching a masterclass of maki preparation, the Tekka Maki (Tuna) – whilst fancy uramakis, California rolls and other creative preparations have their place – a good tekka maki with top quality rice and fish is hard to beat - sometimes the simplest things are the best. 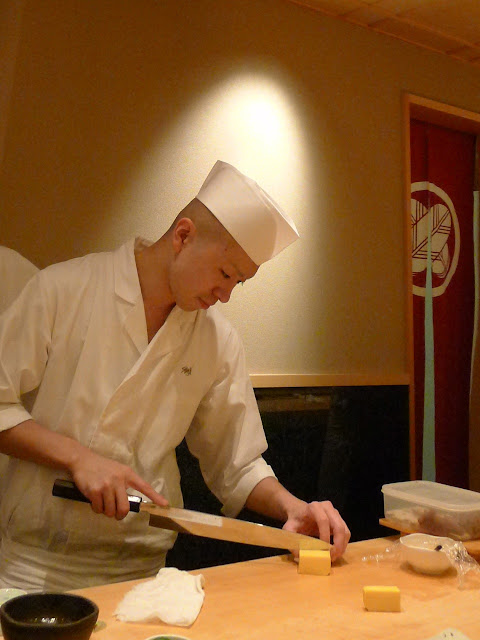 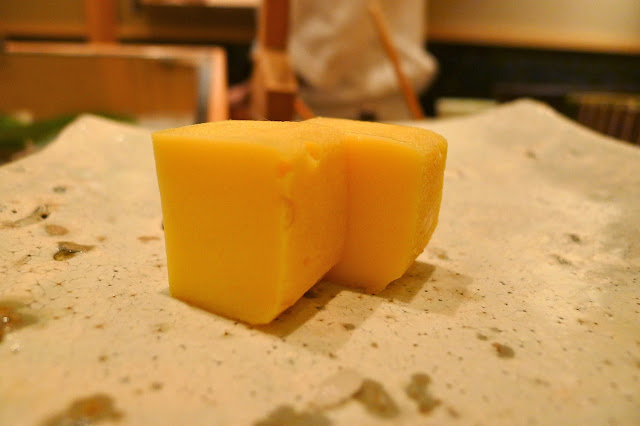 The final savoury course to arrive consisted of two blocks of sweet, custardy Tamago (Egg) – the technique demonstrated for this dish was exceptional. Unquestionably the best I have seen or tasted. 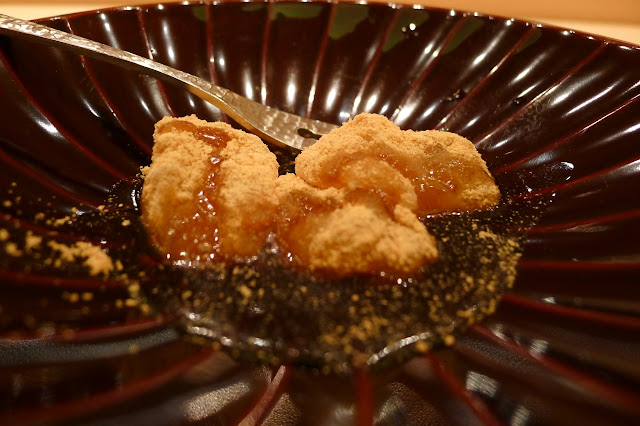 The meal ended with a wonderfully sweet Warabimochi – the perfect ending to the nest sushi lunch of my life… so far.