Joël Robuchon is a French chef who has been knocking about for some time. He knows a thing to two about cooking and has managed to pick up a few awards and accolades over the years. During his time he has opened some pretty successful eateries. Oh yes, and the guys from Michelin are quite keen. 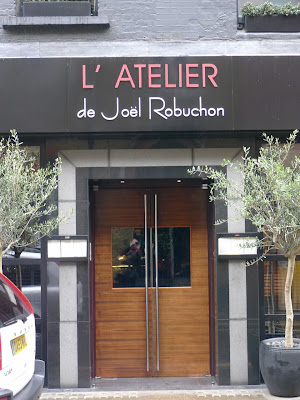 I’ve been eager to try one of his dozen or so restaurants for a while. I nearly managed it in Paris recently but plumped instead for the neighbouring Pierre Gagnaire’s Gaya Rive Gauche (see here). We then almost went in Singapore but heard that Fat Cow had taken delivery of some A5 Omi Wagyu (which, I’m yet to blog about). So, upon my return to England, I promised myself a trip to London to check out the two-Michelin-starred L'Atelier de Joël Robuchon. 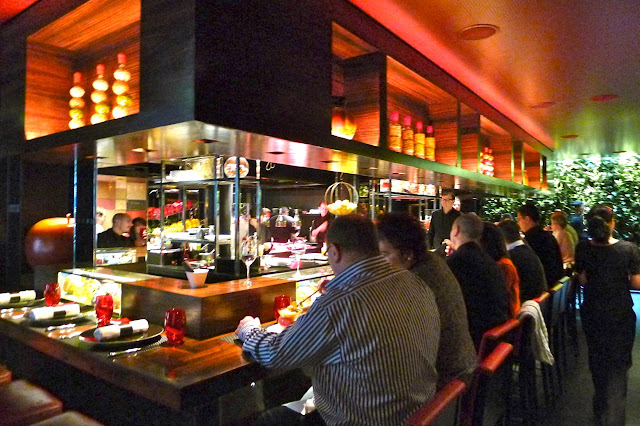 Since going a few people have asked what I thought about it and my responses have largely been negative – perhaps unfairly so? 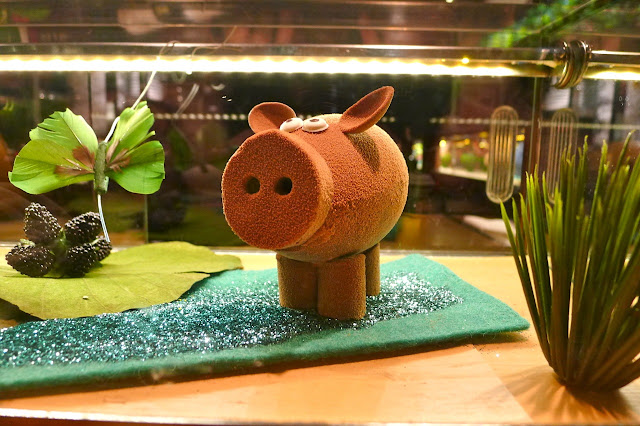 I’ve been telling people that I don’t think it ‘deserve’ two stars. There are a couple of main reasons for this – firstly, and most importantly, I didn’t feel the food was on a par with some of the other two-star places I’ve dined at – e.g. The Ledbury, Passage 53, Le Gavroche, Momofuko Ko and Kajitsu. 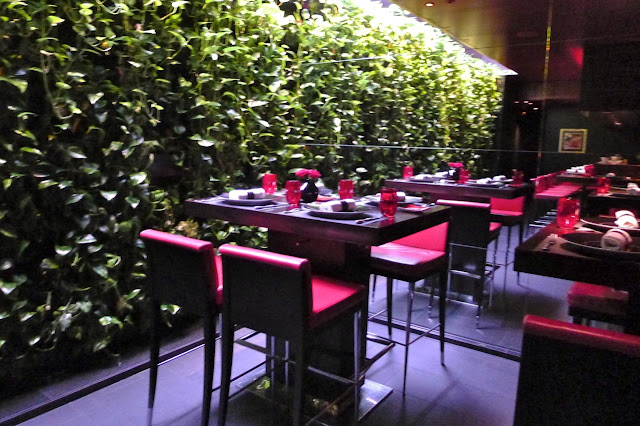 Actually, I don’t think it’s even up there with some of the one-star places I’ve dined at: L’Enclume, Sketch and Fraiche springing to mind. This does not mean however that I didn’t enjoy it – I loved it – the food was great – but for me, ‘just’ one-star great. 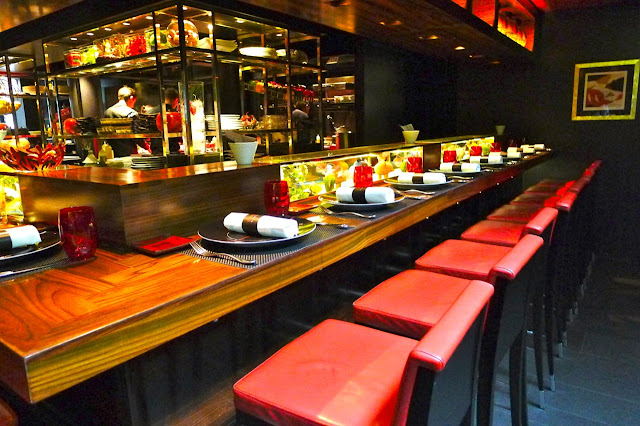 As I’m sure you know, one star indicates "very good cuisine in its category", whereas two-stars warrants "excellent cuisine, worth a detour" – given the choice in London, for me, simply put, it’s not quite worth the ‘detour’. 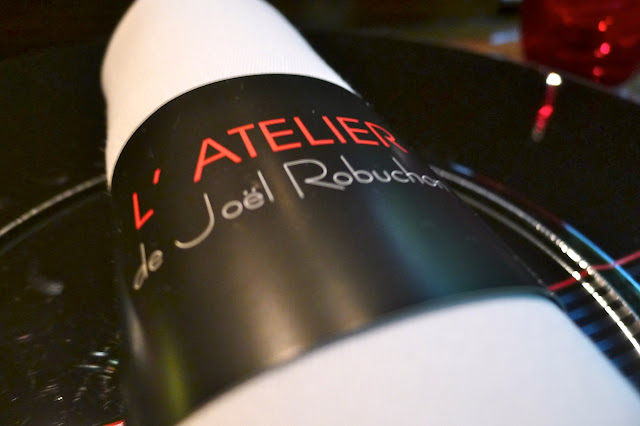 If this sounds like I’m being picky... I am; but as fellow two-star chef Michel Roux Jr. always says, ‘It’s all about attention to detail.’ 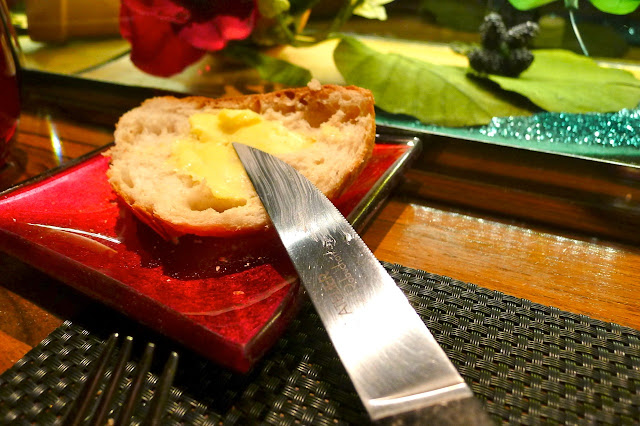 Food aside (that I’ll come to) other things that were not right for me included not being served a butter knife (when others were) and a dirty fork (naturally, not wanting to evoke the scene from Monty Python I did not mention it at the time and buffed it myself on my napkin – I’m quite resourceful like this). 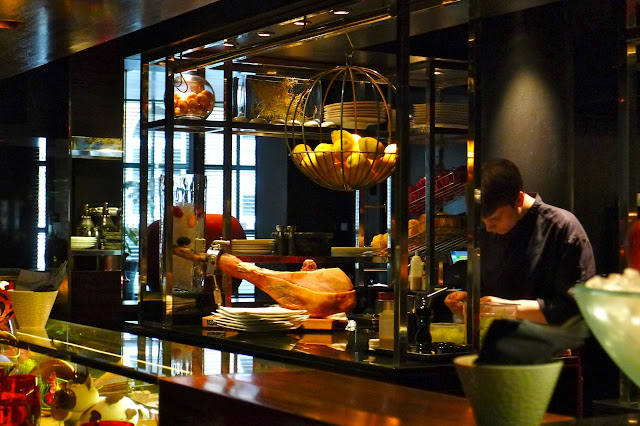 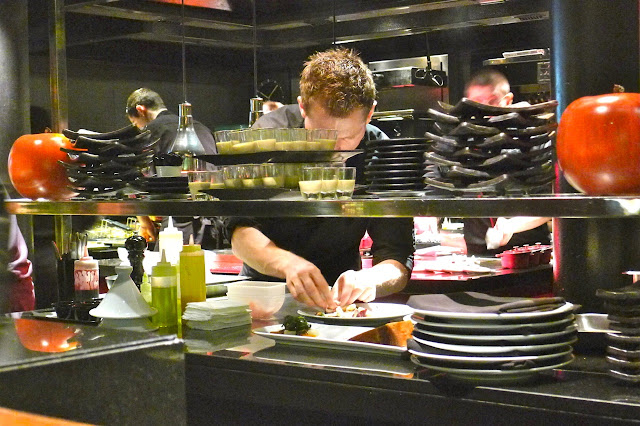 Décor wise L'Atelier de Joël Robuchon should be right up my street – it’s modern and has an open kitchen. Whilst I loved the open kitchen thing at say, Momofuku Ko (see here) or Simon Rogan’s Aulis at L’Enclume (here), the L'Atelier version did not really work for me – you couldn’t really see much ‘cooking’ going on (just assemblage) and there was no interaction with, or ‘theatre’ from the chefs. 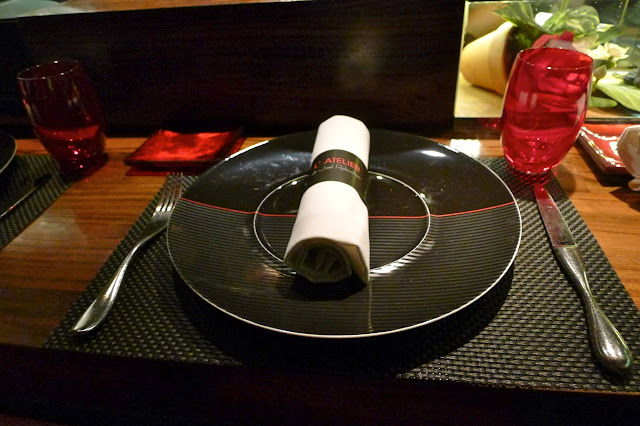 I was also unconvinced by the red and black theme. I so wanted to think of the décor as sleek and sexy in the classy Folies Bergère style but part of me was unable to shake the thoughts of ‘black ash furniture’ – it all felt ‘a bit eighties’ and passé – like the album cover to Blondie’s Parallel Lines or the tacky red and black underwear that men often buy their wives and/or mistresses on Valentine’s Day. 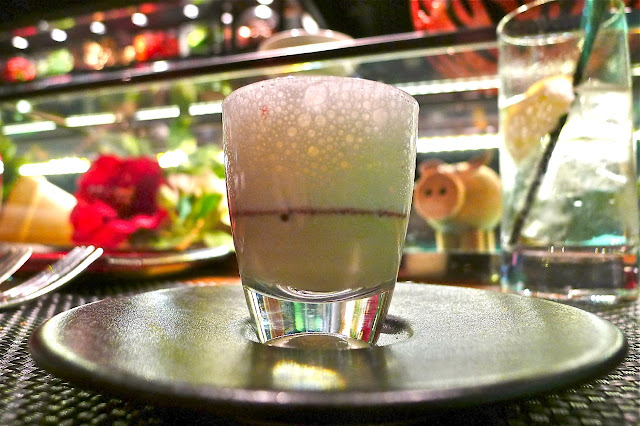 The signature, Royale de Foie Gras amuse bouche was an excellent start to the meal - a luxuriously smooth foie gras mousse; a layer of port reduction all topped with a frothy Parmesan espuma. 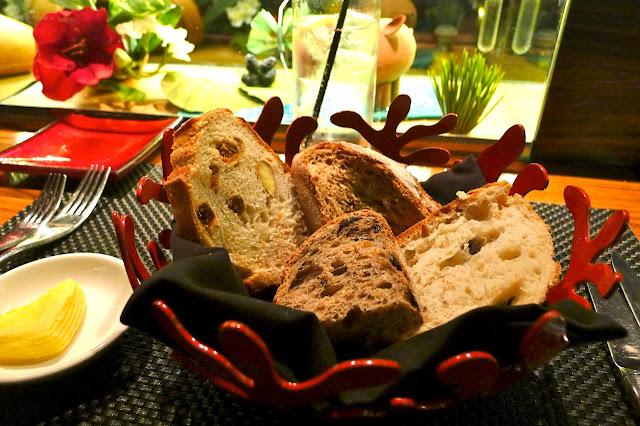 I opted for the set lunch course of one Entrée, one Plat and one dessert but supplemented with an additional Entrée from the ‘Small Tasting Dishes Menu’. 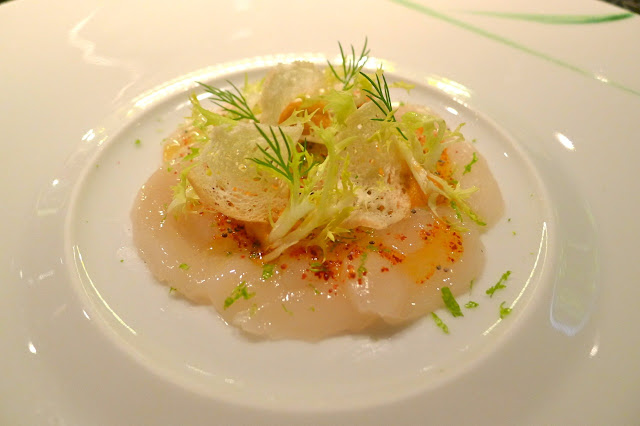 Delicious as it was, at £18 it did seem quite a lot of money for a relatively small amount of sea urchin and scallop carpaccio. The lemony olive oil was gauged just right and the little dill fronds added hints of anise and beauty. 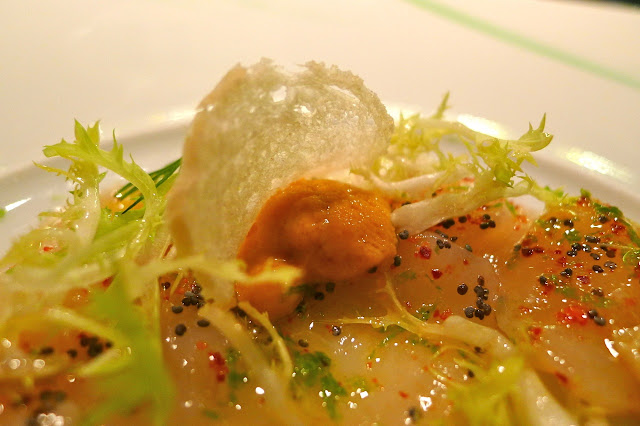 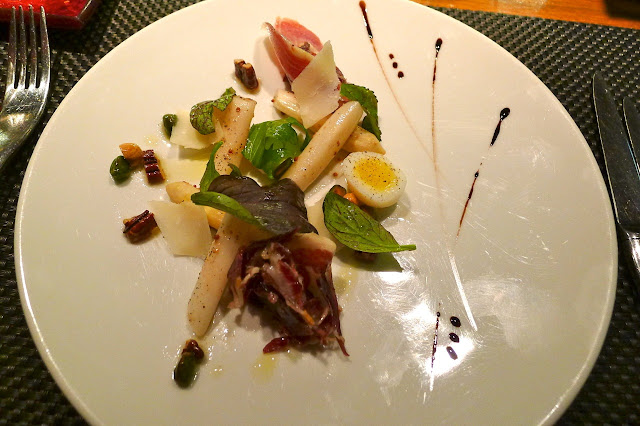 On paper I was looking forward to this dish the most. Having recently got back from Paris during asparagus season I had been lucky enough to have some wonderful white asparagus dishes and had high hopes for another. 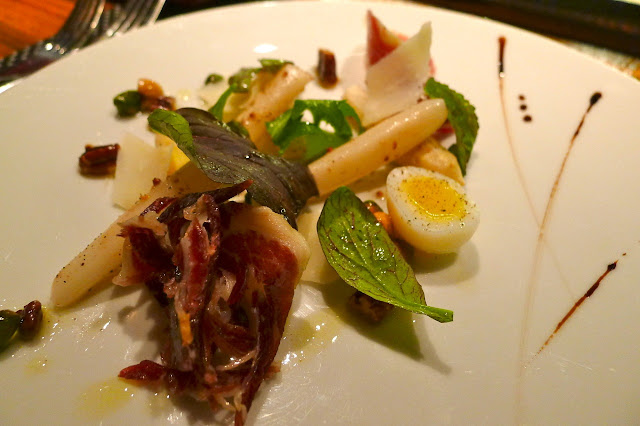 Sadly, this one did not hit the mark. Not quite sure of the definition of a ‘warm’ salad – but the only part of this dish that was remotely warm was the soft-boiled quail egg. The asparagus itself was ‘fridge cold’. Each component; the pistachio and pecan nuts; the cheese and the Ibérico Ham were excellent individually but they just did not come together for me. 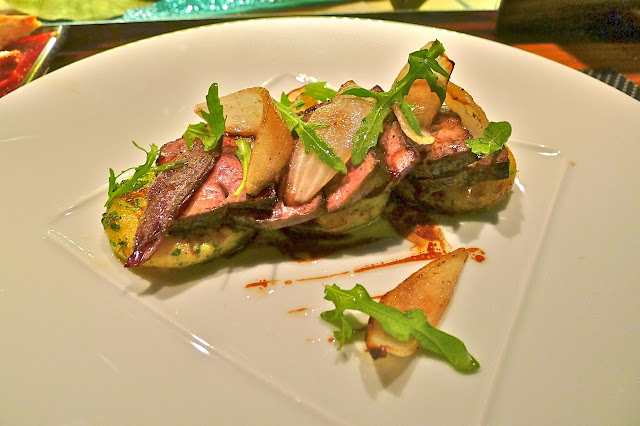 The calf’s liver, glazed with sherry vinegar was sublime – the dish of the day for me. As a child I did not enjoy liver but cooked to perfection, like this was, I now find it hard to beat. 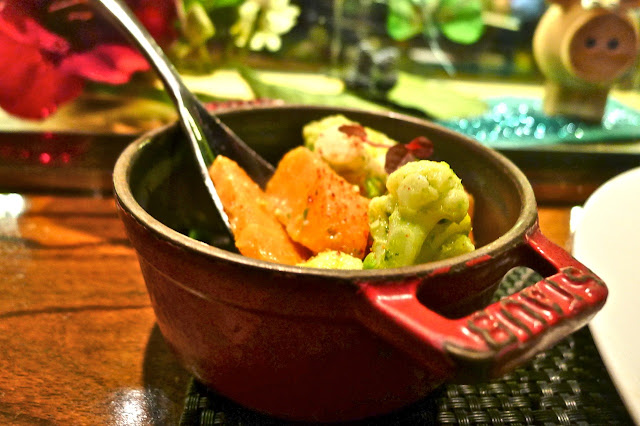 The ‘bed of’ parsley potatoes and accompanying veg in the little cast iron Staub cocotte were also served too tepid for my taste. They were cooked well enough and tasted good could but could have done with either being warmed through more or served quicker from plating up – a down side of an open kitchen meant that I could see my dish sitting ‘on the pass’ for too long before it was served. 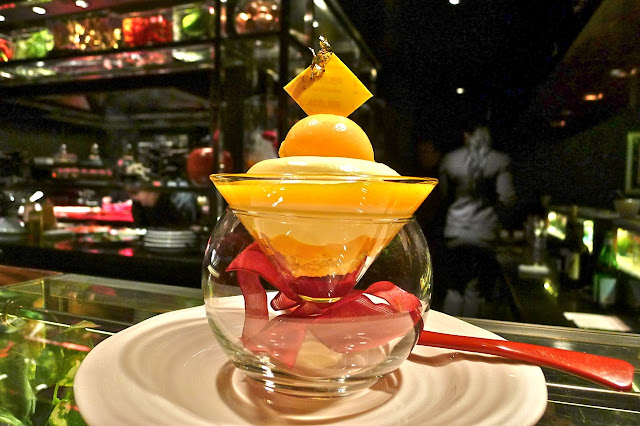 You couldn’t really go wrong with a dessert made from textures of mango and the enigmatic Joconde biscuit; and they didn’t – good tropical flavours, wonderful textures and beautiful presentation topped with decadent gold leaf (it even included some ribbon seemingly taken from some of that gaudy Valentine’s lingerie). 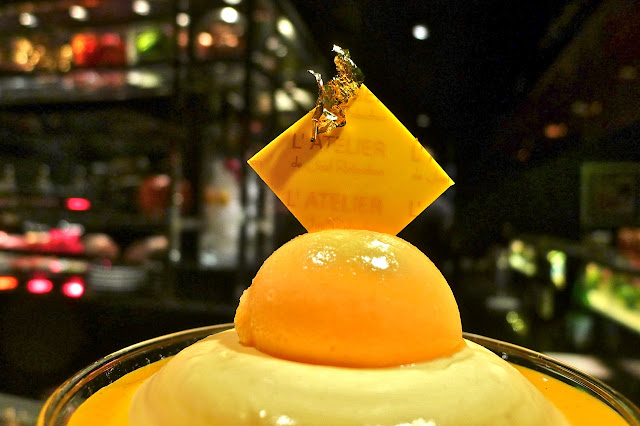 A hard one to win – I know if this was a one-star restaurant I’d be raving about it but as a two-star the higher expectation has sadly left it open to closer scrutiny from me. I want to rave about it; I want to be able to say it’s up there with the other two-star places I’ve dined at but… what do I know?