A few days ago I saw a tweet by a relatively unknown chef here in the north of England bemoaning the culture of the “celebrity chef” – this was during an episode of TV’s MasterChef which featured a judging panel of some of Britain’s most highly regarded talents.

With a galaxy of Michelin stars between them, the chefs involved were Simon Rogan, Nathan Outlaw, Ashley Palmer Watts, Michael Caines, and Tom Kitchin.

First off, I wouldn’t regard these guys as “celebrity chefs” and certainly not “TV cooks” – sure they have appeared on TV on a number of occasions but at their core they are restaurant cooks who run successful and highly regarded kitchens.

Of course, in some cases there may be a little bit of ego involved in appearing on TV (it will certainly make their mums proud) and there is obviously invaluable publicity for their restaurants; but I don’t see many of the chefs listed above on Sainsbury’s adverts or selling their own branded sauces, olive oils or cous cous and putting their names to cheap pans and knives. 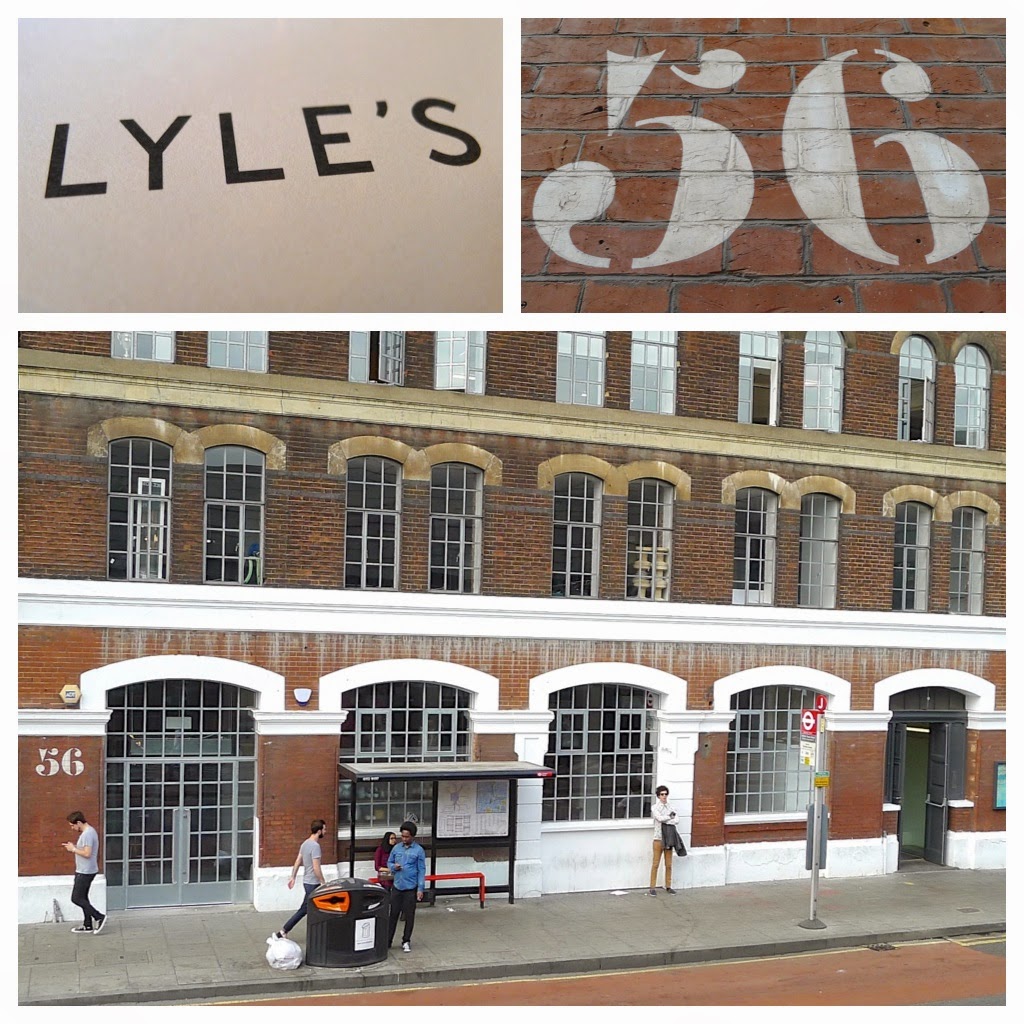 These chefs are ambassadors for British produce and cookery and anyone chef who knocks them is just jealous - few chefs understand the English countryside as a larder better than Simon Rogan; Nathan’s passion centres on our island nation’s phenomenal seafood; at Dinner, Ashley revives historical British dishes; Tom celebrates the produce from his native Scotland and what could be more quintessentially British than Caines’ Gidleigh Park, housed in a Tudor-style country house, set amongst 55 acres on the edge of Dartmoor National Park?

Whilst these chefs, due to their Michelin accolades and occasional media work, may be some of the more recognisable faces to foodies who watch the TV shows and read the newspaper food supplements, there are a number of young ‘lesser known’ chefs who are also considered the vanguard of British cuisine.

Although not quite ‘household names’, young talents such as Isaac McHale, Florence Knight, James Knappet, Giles Clark (sous chef to Junya Yamasaki at Koya) and Ollie Dabbous hold a few accolades of their own and run or work in some of the choicest restaurants in the capital.

One chef who merits a mention in the company of those above is the hugely talented James Lowe. 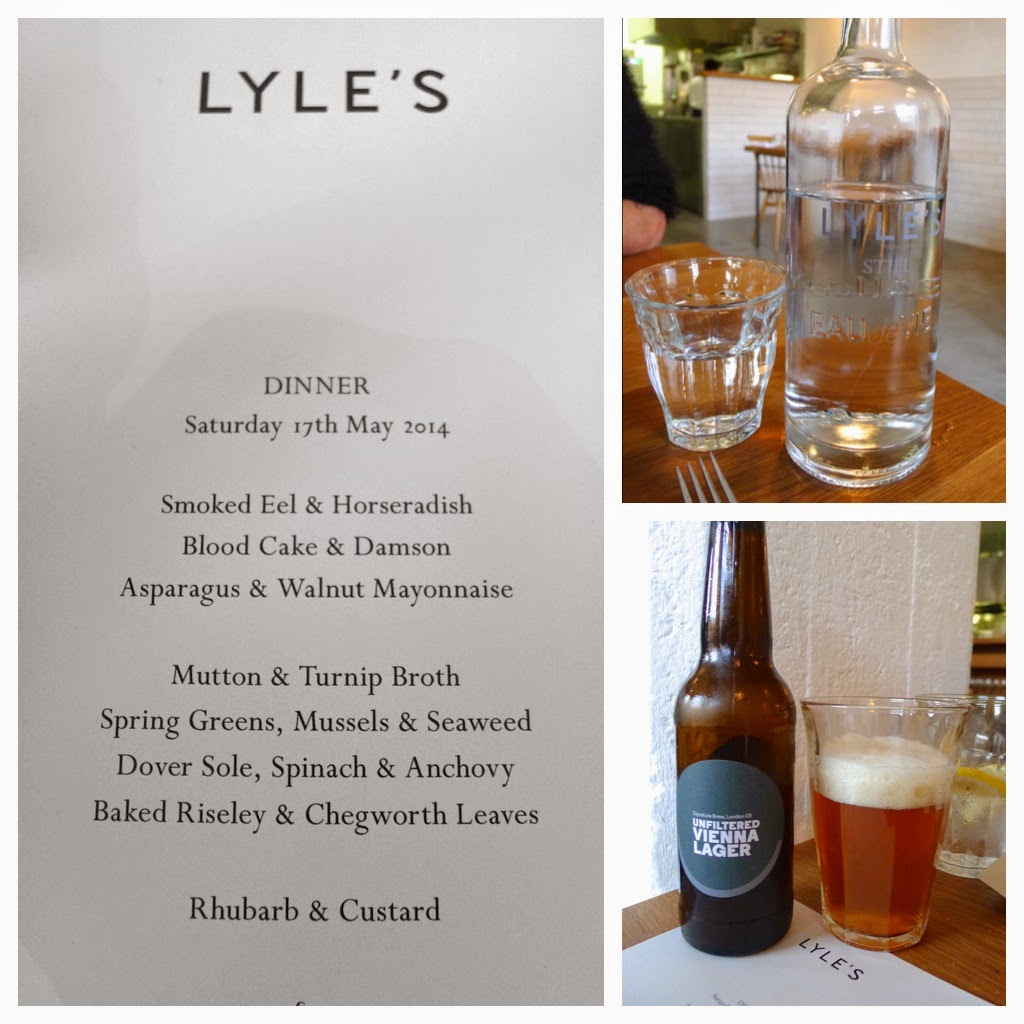 James is best known for being a long standing former Head Chef at Fergus Henderson’s St. John Bread & Wine; he also trained at La Trompette, The River Café, The Fat Duck and Noma. In London, he also made a name for himself as one of the Young Turks with Ben Greeno and Isaac McHale.

Recently James’ Twitter bio has changed from ‘Chef looking for a restaurant’ to ‘Head Chef @lyleslondon’ - to the casual observer it may have seemed as though, for the past couple of years, James has been travelling the world on an extended ‘holiday’ participating in events such as René Redzepi’s ‘MAD symposium’, ‘San Sebastián Gastronomika’ and ‘Cook It Raw’ but all the time he had been looking for the right location and backers.

Eventually, a partnership with the Sethi family (who also own Trishna, Gymkhana and Bubbledogs) and a prime location in The Tea Building (opposite the BoxPark) at 56 Shoreditch High Street turned out to be the perfect pairing 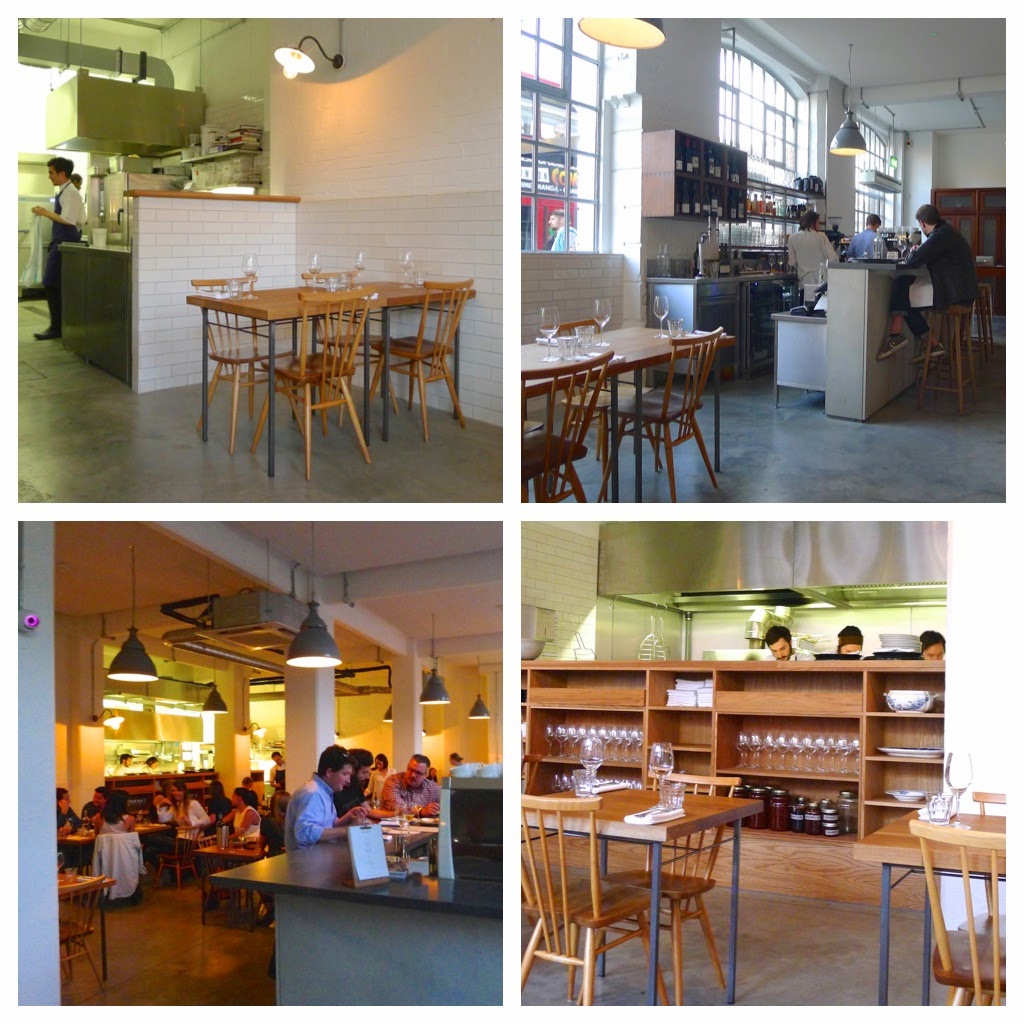 An oblong canteen like space with plain white walls and ceiling, there are obvious parallels with St. John Bread & Wine. Slightly larger, Lyle’s also has a small bar area, an open kitchen along the back wall and large elliptical arched windows spanning the other. Uniform rows of crafted wooden furniture complete the paired down look that echoes the ethos of the food.

Open 08:00 to 23:00 Monday to Friday, 18:00 to 23:00 on Saturdays (closed Sundays) with affordable menus showcasing carefully sourced quality ingredients and excellent coffees, Lyle’s is very much there to serve local community as much as it could become a destination restaurant.

James works with the seasons and often deals directly with farmers and small producers, as such the a la carte menu can change daily. In the evening there is a small, never over facing, tasting menu which at the time of writing was set at just £39 for 8 courses plus some wonderful sourdough bread. 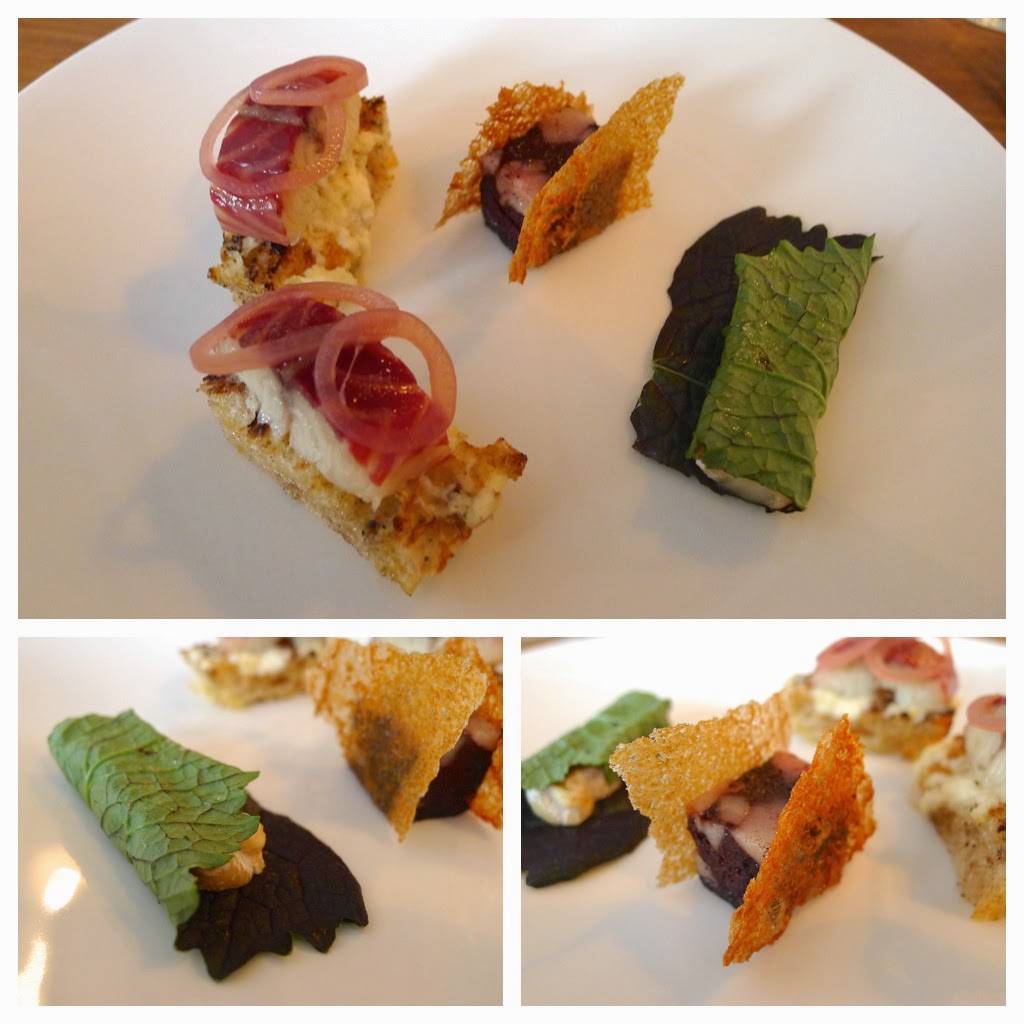 Our meal started with two ‘snack’ sized courses: Smoked eel & horseradish and Blood cake & damson but as my wife is not keen on blood cake or black pudding she was offered Mustard leaf, cheese & honey as an alternative. Each was delicious with the quality of produce shining though. 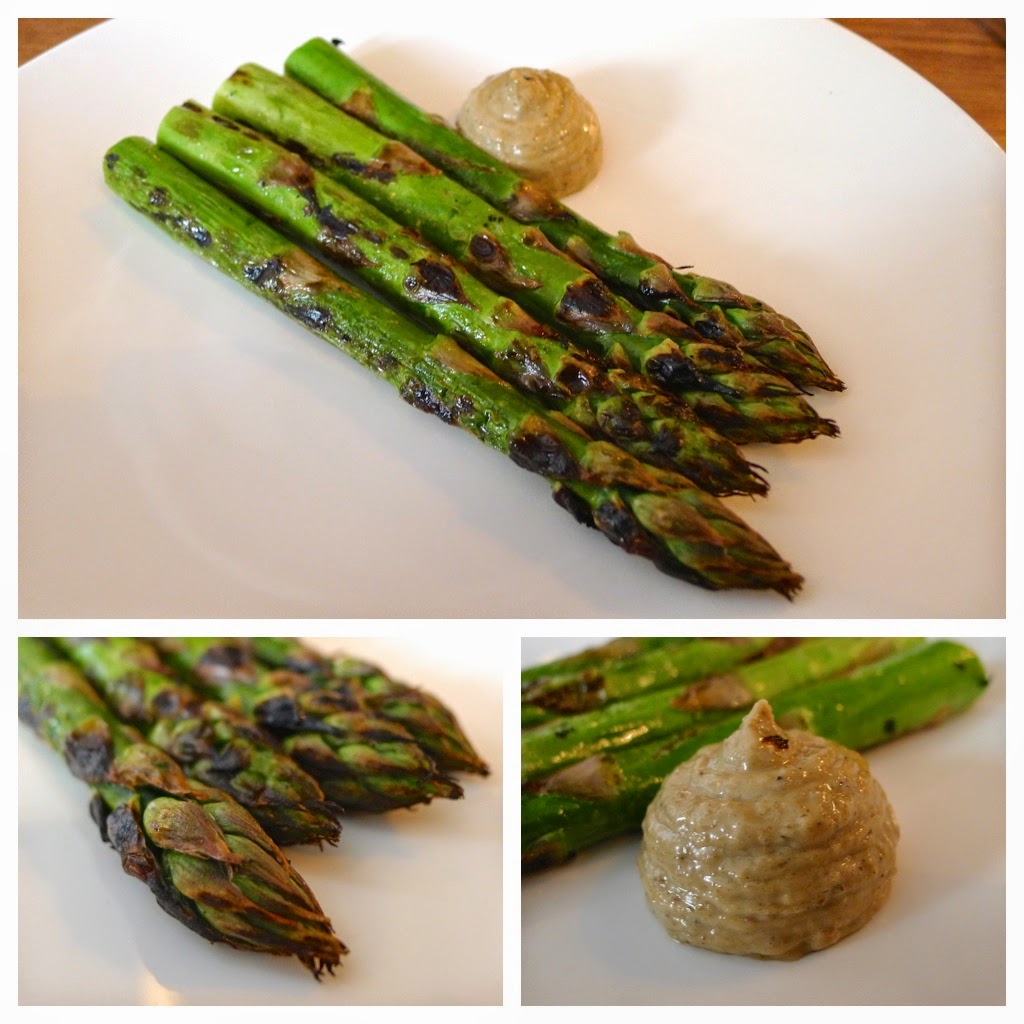 Asparagus & walnut mayonnaise – although meant as a compliment, sometimes I feel a little guilty when calling a chef’s food ‘simple’ as often the work that can go into producing something to appear as such can be more than first meets the eye. With this dish however, I have no qualms about calling it simple… simply delicious. 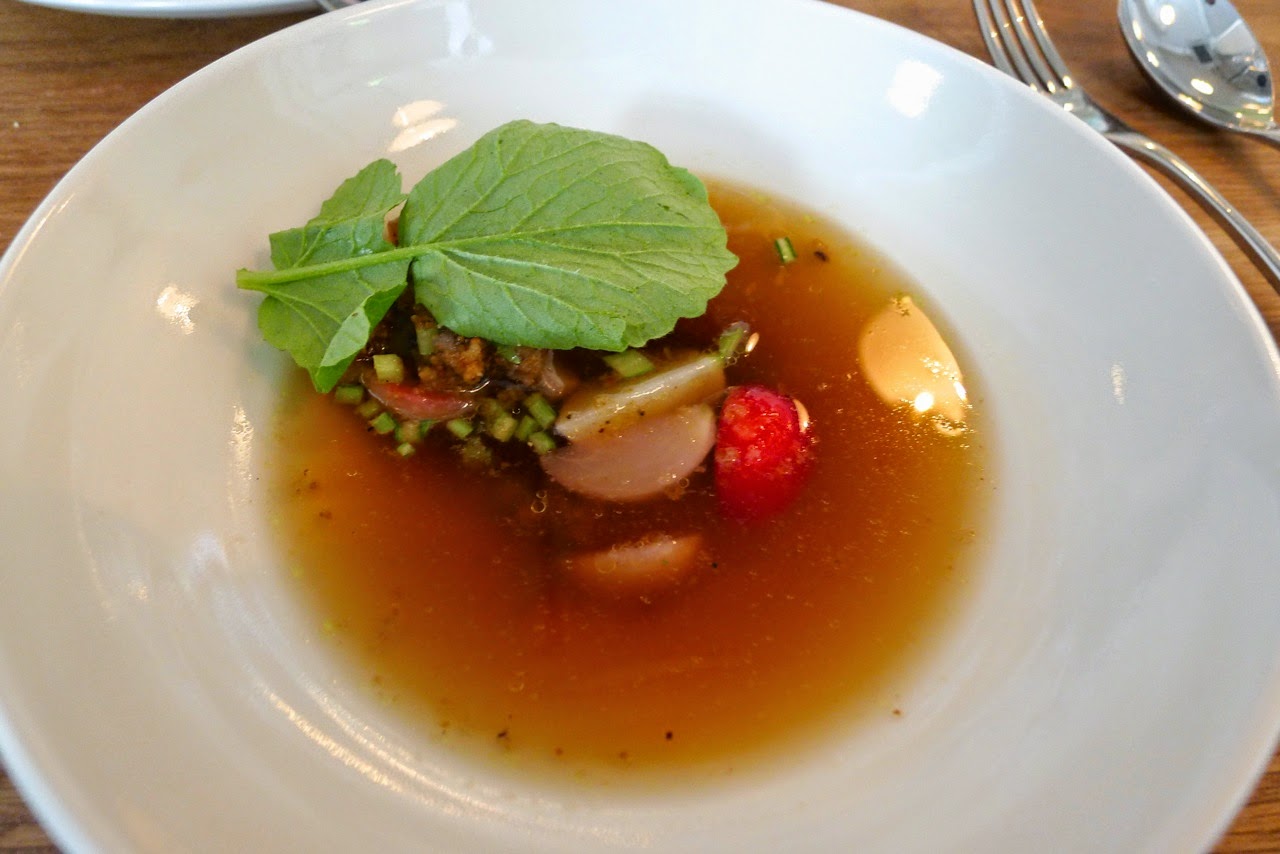 Mutton & turnip broth – I’m certain the broth which carried so much flavour, punctuated by sharply pickled turnips, will end up of my traditional end of year ‘best of’ posts… a top dish. 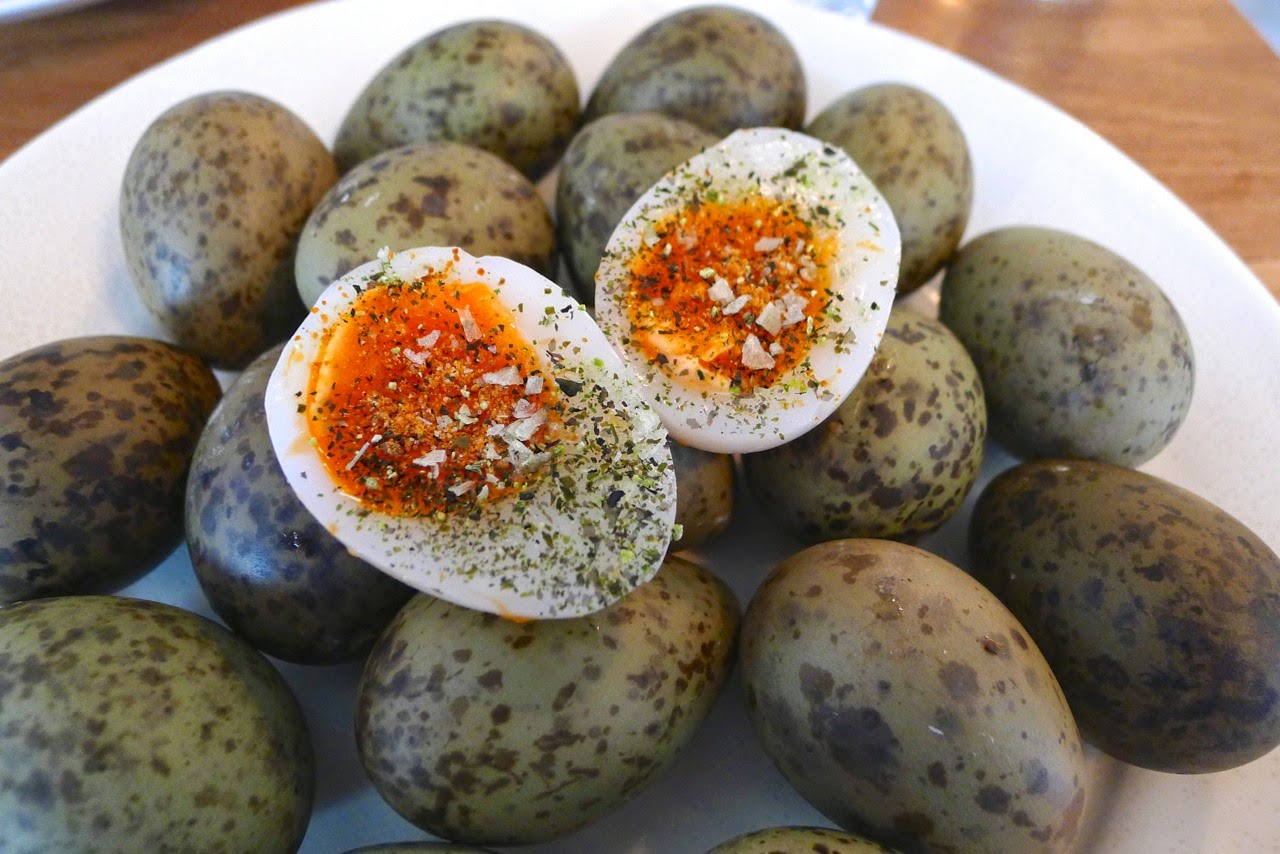 Gull’s egg – the last time I ate a gull’s egg was when James cooked one for me at The Ten Bells, these were stunningly cooked and topped with dried sea urchin and seaweed… lovely little morsel. 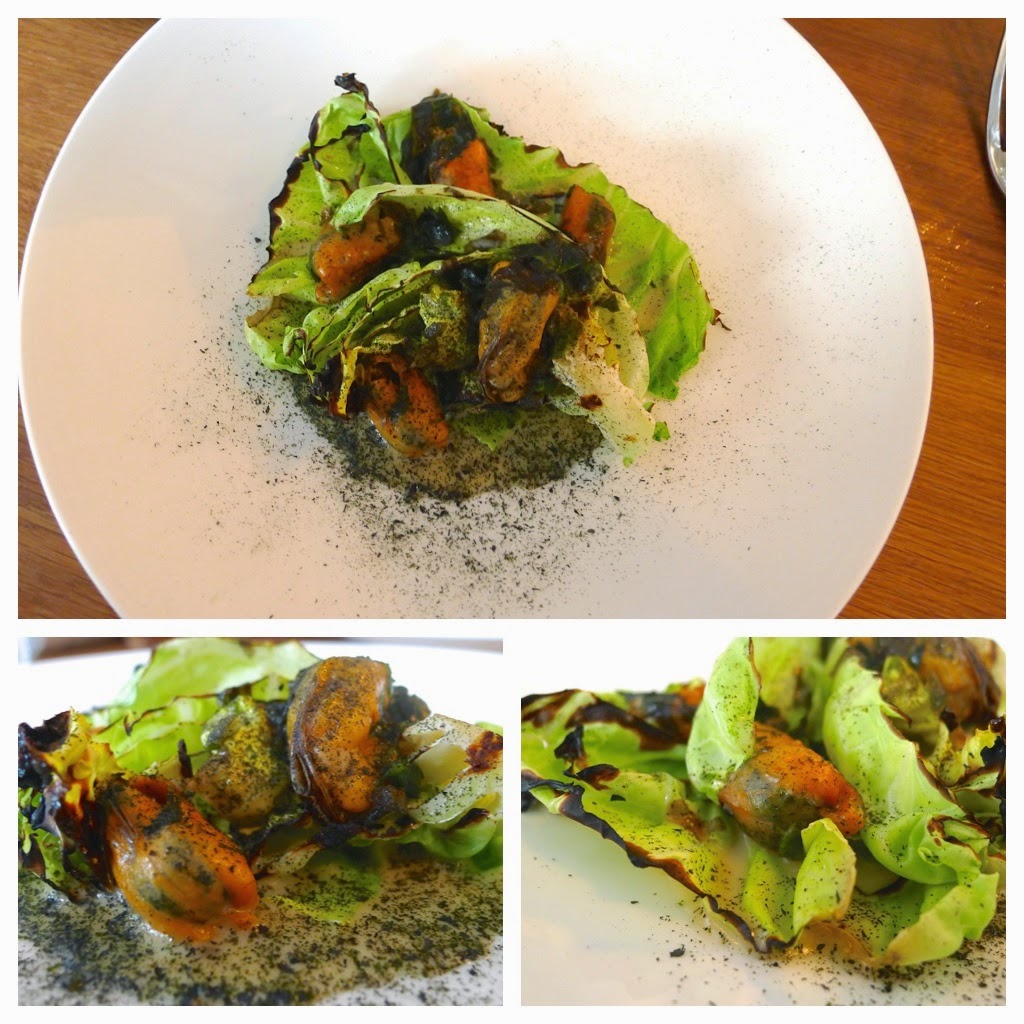 Spring greens, mussels & seaweed – another beautiful dish with the bitterness of the charred spring greens working a treat with the sweet plump mussels and rich creamy sauce.

Dover sole, spinach & anchovy – I like to think of myself as fairly well informed when it comes to food, or at least ingredients, but when Lyle’s personable and knowledgeable front of house manager, John Ogier, presented this as ‘aged fish’ it was something that piqued my interest. 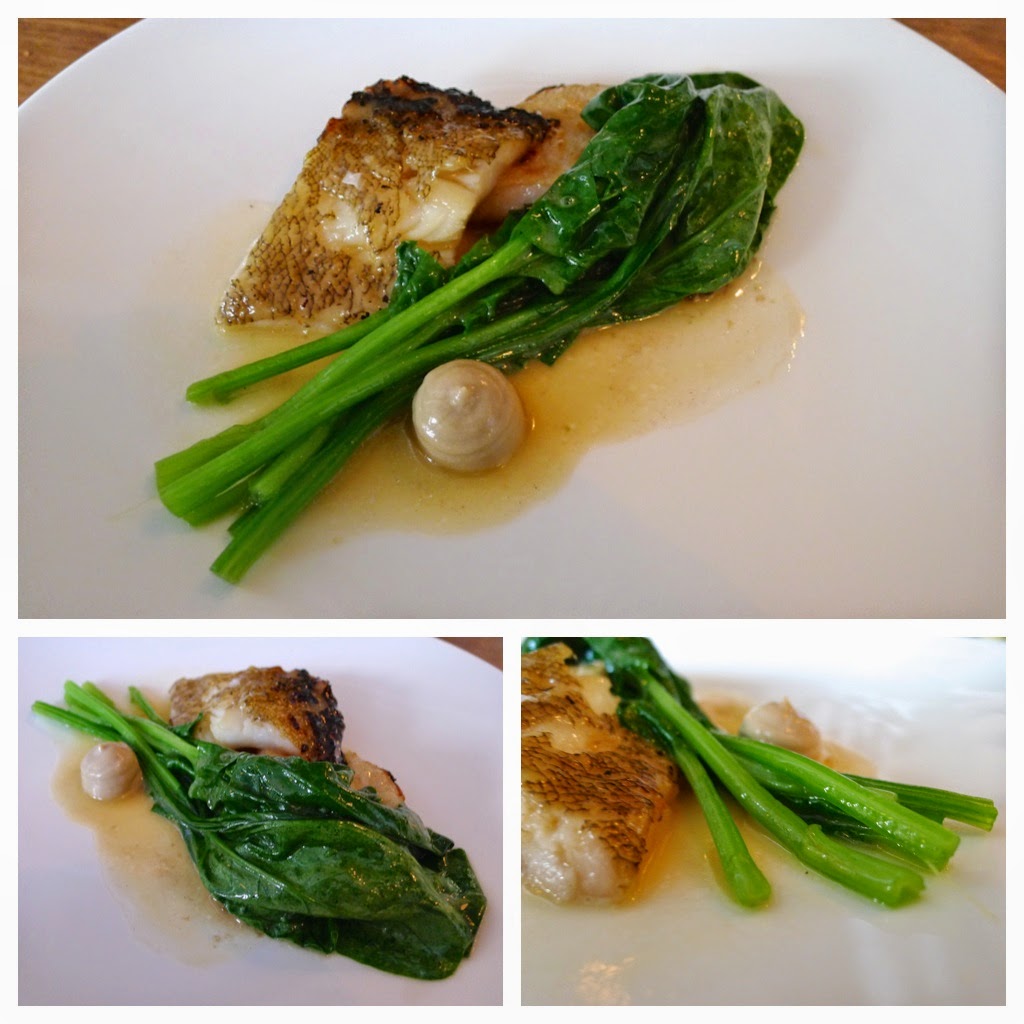 Of course, I had read about (but not yet tasted) the Japanese ‘Funa zushi’ where, to simplify, fish are packed in salt for a year, before being dried and mixed with rice and allowed to ‘ferment’ for anywhere between three and six years. Lyle’s method of aging is no where near as ‘extreme’ – here certain types of flat fish, such as the dover sole, are rested for up to six days where some of the natural moisture will escape and flesh will firm. The results were pleasing but it was the injection of seasoning from the anchovy emulsion that really wowed. 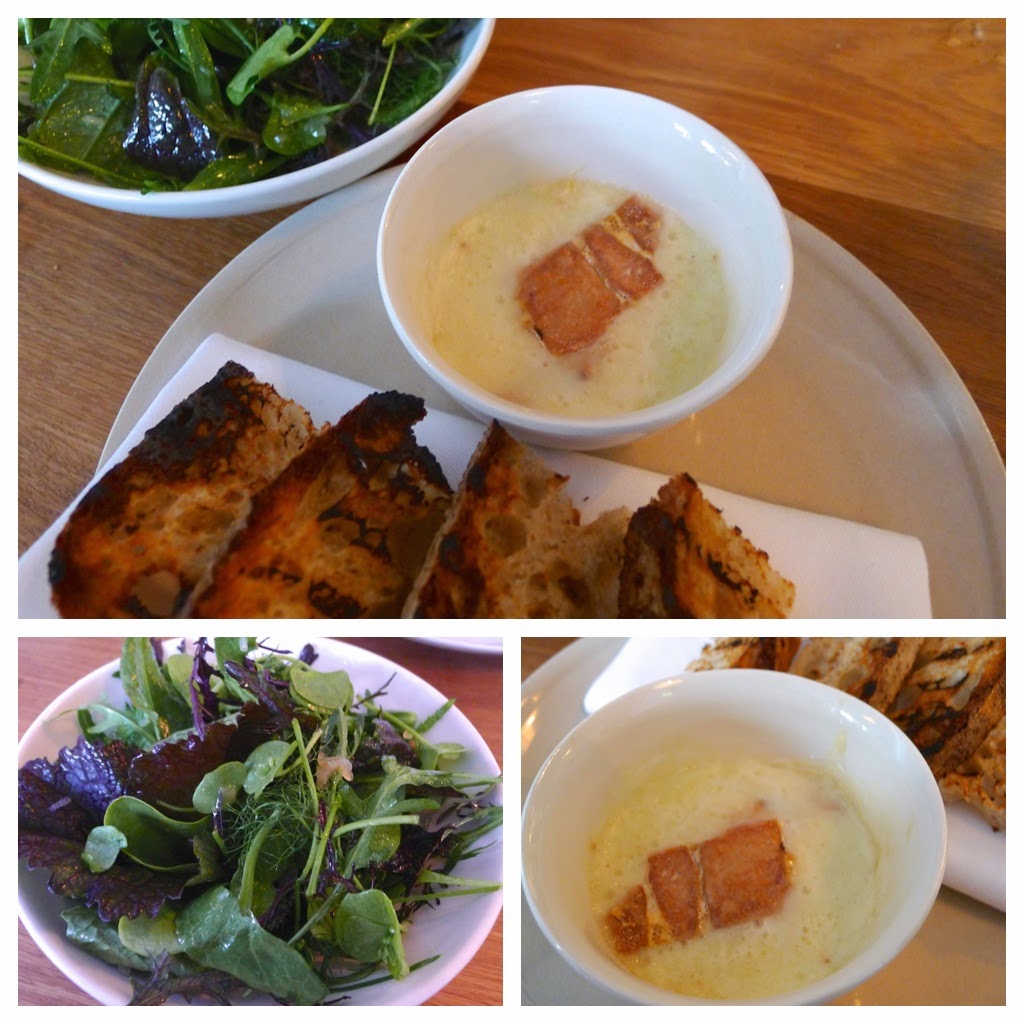 Baked Riseley & Chegworth leaves – more delightful sourdough, this time toasted was served with a bowl of melted Wigmore cheese and a bowl of salad leaves. Cheese and salad may not sound all that special but thanks to the delightfully acidic* dressing this was a great dish. (*What I initially thought were cells from the flesh of a grapefruit turned out to be a tiny dice of shallots with the flavour coming mainly from vinegar and apple.) 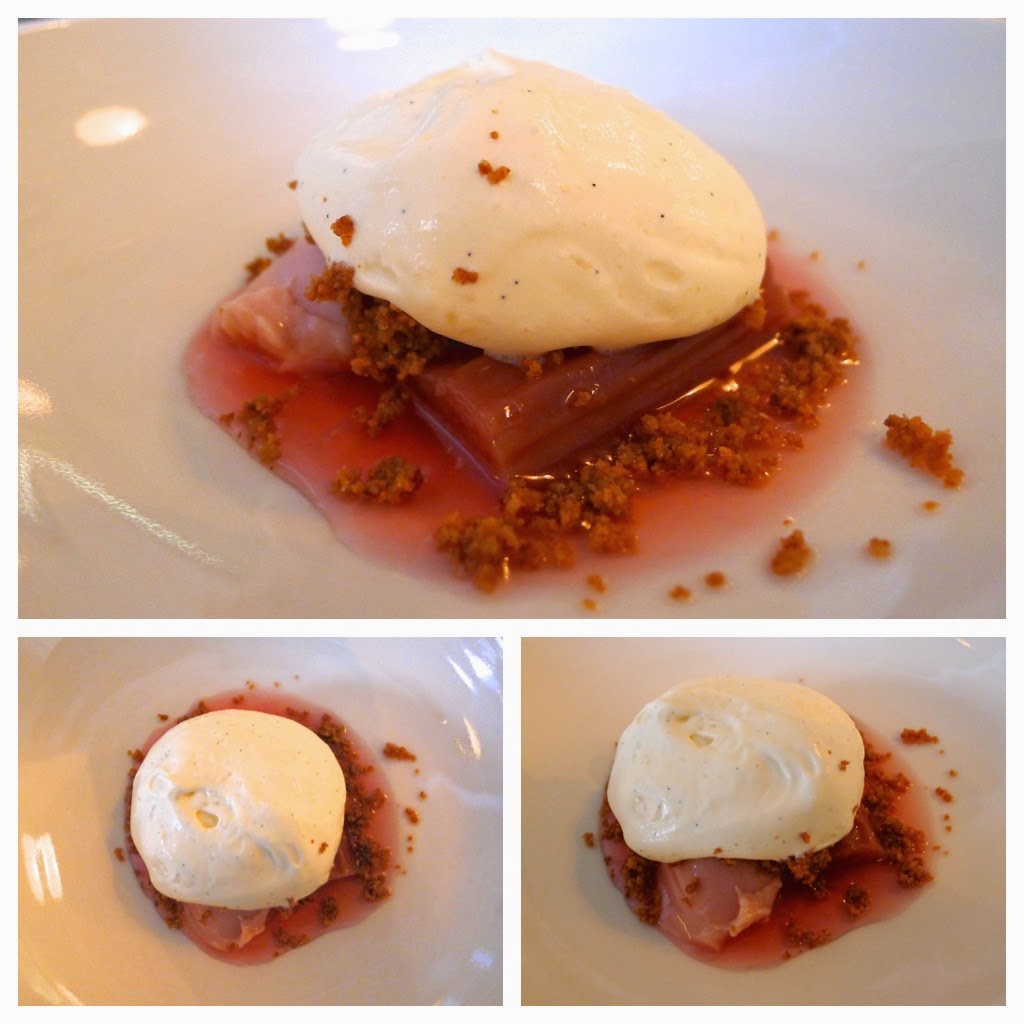 Rhubarb & custard – simple, fresh, flavoursome and seasonal… a dessert that sums up a meal at Lyle’s. 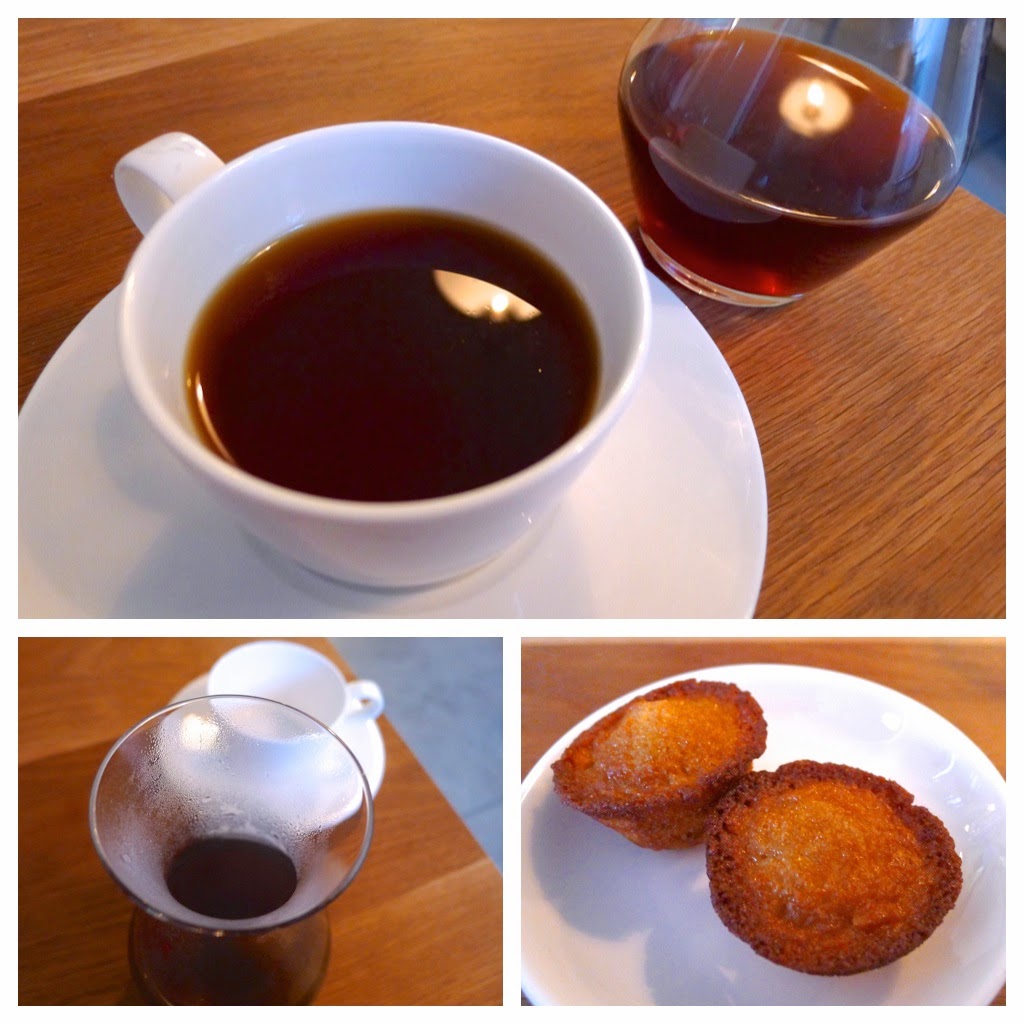 The meal ended with a couple of dinky Brown butter cakes and some excellent quality Ethiopian filter coffee.

Lyle’s very much reminded me of such places as Le Chateaubriand and Septime in Paris and, of course, The Clove Club – these places are listed at 27, 52 and 87 respectively in The World’s 50 Best Restaurants so expect big things from Lyle’s and James Lowe.

Celebrity chefs or non celebrity chefs, dining at Lyle’s has confirmed one thing… British cooking is in a strong place.