Of all the restaurants I planned to visit in Paris, Le Chateaubriand intrigued me the most. How could it be that an apparently simple bistro could rank above its neighbouring multi-Michelin-starred contemporaries, L'Astrance, L'Atelier De Joël Robuchon, Pierre Gagnaire, L'Arpege and Alain Ducasse Au Plaza Athénée in the S.Pellegrino World's Best Restaurant lists? 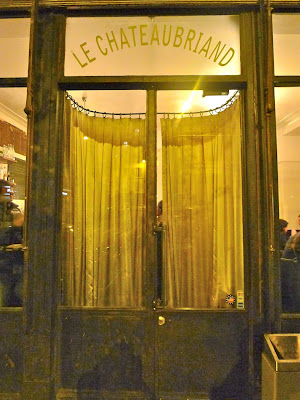 Study the list further and you’ll see more world-renowned French restaurants, such as Per Se, Le Bernardin, Les Amis, The French Laundry, Daniel and Jean Georges and note that none of them currently rank higher than Le Chateaubriand’s 9th place in the top 50. 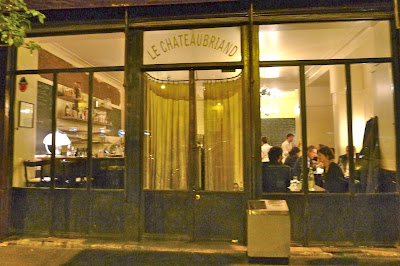 Whilst French cuisine, does not entirely dominate the list, its presence is unquestionably huge. The French invented ‘haute cuisine’ - from the ‘first master chef’ Guillaume Tirel to La Varenne, Carême and the legendary Auguste Escoffier, Fernand Point, Alain Chapel and today’s living legends like Bocuse, Koffmann, Marc Veyrat and the families Roux and Troisgros, French food has for centuries been considered some of the finest in the world. 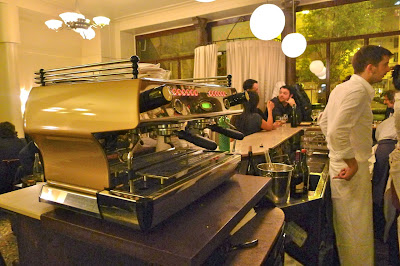 Indeed some of the best restaurants in cities throughout the world are French – for example, you can currently eat Pierre Gagnaire’s food in a myriad of places dotted around the globe, including London, Tokyo, Dubai and Moscow; Guy Savoy has venues in Las Vegas and Singapore; Alain Ducasse in New York, Washington D.C and Beirut; whilst Joël Robuchon’s numerous outposts are located as far afield as Hong Kong, Macau and Taipei. 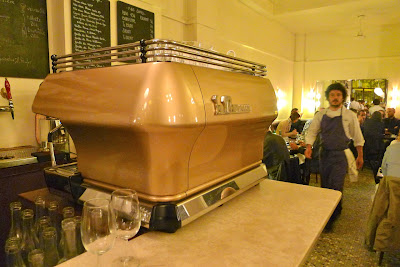 Now that I have eaten there, do I think Le Chateaubriand serves the 9th best food in the world? Fantastic as it was, ninth in the world? I fail to see it.

Do I think Le Chateaubriand is the 9th best restaurant in the world? This I can see; and I think I may know the answer as to why it is… or at least part of it. 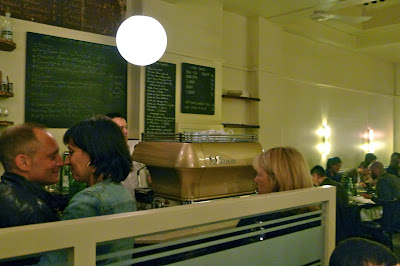 As wonderful and as fantastically French as I’m sure the aforementioned are, one thing they cannot claim that Le Chateaubriand can, is to be authentically Parisian. In a city famed for its “Joie de vivre” “Savoir-faire” and “Je ne sais quoi”, for the past ten years or so, Parisians and visiting foodies have enjoyed the néo-bistro renaissance – Le Chateaubriand is at the heart of this movement, which with a term coined by Sébastien Demorand are now referred to as ‘Bistronomes’ or ‘Bistronomie’ (a portmanteau of  ‘bistro’ and ‘gastronomie’). 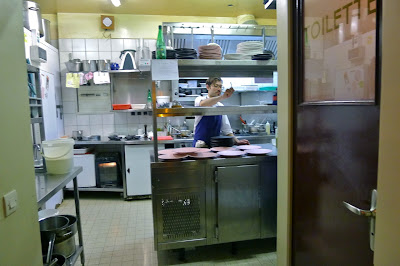 Although to sample more of Iñaki Aizpitarte’s food, you can visit his wine bar Le Dauphin (just two doors along), there is something ‘organic’ about Le Chateaubriand (not just the wines) – it has a unique vibe that could not be reproduced. If you want to try and think that getting a restaurant into the top ten of the world’s 50 looks easy, I have devised a simple recipe:

Le Chateaubriand gives the impression that when they discovered the former grocery in 2006, they found the old tables and chairs stacked in the corner under a dustsheet. Seemingly, they hung this sheet as a curtain over the front door in a vain attempt to keep the draught out; scribbled some specials on the blackboard; invested all their remaining money in a top of the range coffee machine and then thought, “What about the light chandeliers?” 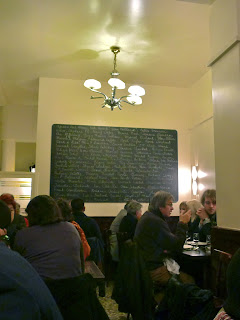 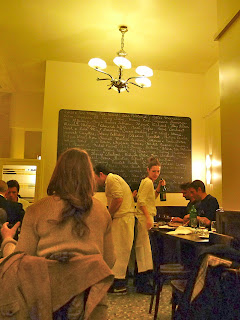 "Let's just get open, start serving food and we can change them when we've made some money."

Of course, for me, these things are now what make the restaurant and the experience. I asked myself, did they damage and tilt the light fittings purposefully or just never get around to straightening them? 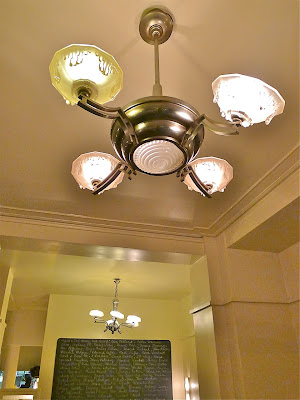 Whatever the answer, they are now set to remain permanently tilted. To straighten them or, Heaven forbid, replace them would be like popping along to the Lourve with some prosthetic limbs for the Venus de Milo or a head transplant for the Winged Victory of Samothrace - like these famously broken statues, it's Le Chateaubriand's 'imperfections' that make it, well… perfect. 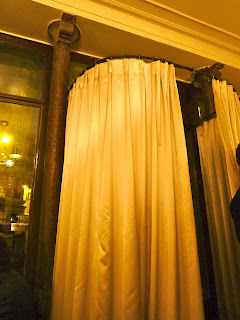 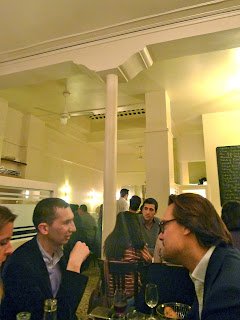 Having failed in a few attempts to book ahead, we decided, as advised by many to arrive about nine/nine-thirty and join the queue awaiting the second sitting. I hate queuing, but if I'm going to be in one, then I want to be at the front - with this in mind, we arrived at about twenty to nine.

With a slight chill in the air, I 'sensed' that even my ever dutiful wife was not too enamored with my apparent alacrity to stand and wait for an hour or so - she soon softened when I suggested a glass of champagne in the neighbouring Le Dauphin - from here we had a vantage point that promised me at least second place, the minute a queue started to form. 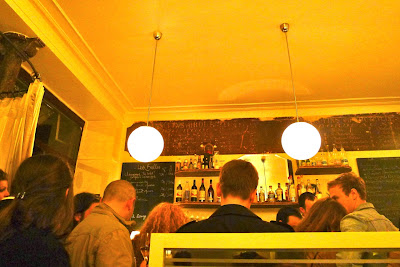 To cut along story short, because we were obviously such wonderful people, the staff at Le Dauphin pulled a couple of strings and arranged for Le Chateaubriand's maitre-d to 'collect us' when a table became available. We were seated before nine o’clock - “Result!” 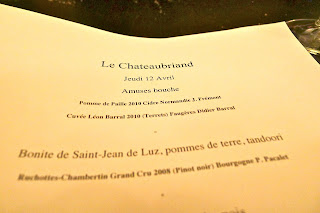 Changing daily and detailing the five set courses that Iñaki Aizpitarte would be preparing that evening for €55 each (€115 with wines), Le Chateaubriand’s menu is famously and pretentiously presented on an unpretentious piece of white A4. 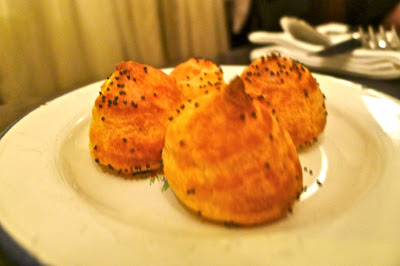 Diners are typically treated to a selection of Amuse Bouche; the first or ours being Gruyère Cheese Gougères with poppy seeds. I’ve experimented a lot with gougères at home recently, even having a go an Indian inspired ones with paneer and various spices. Only to conclude that a good gougères should be made with a decent cave aged gruyère – these reconfirmed that assumption. 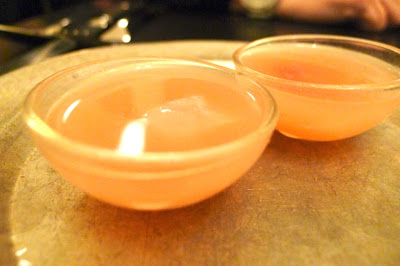 Next up we were presented with that day’s variation of the signature Ceviche Shooter – ours contained black (striped) mullet. The pink hue and citrusy hit suggested pink grapefruit in with the lemon – a fabulous kick of flavour. 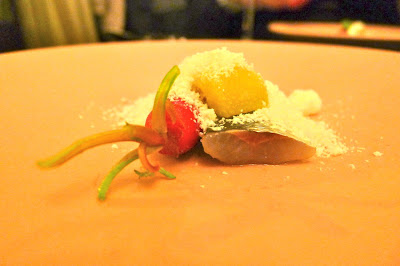 This was followed by a Vinegared Sardine and topped with poached rhubarb a goat’s cheese ‘snow’ – wonderful textures and  a respect for ingredients. 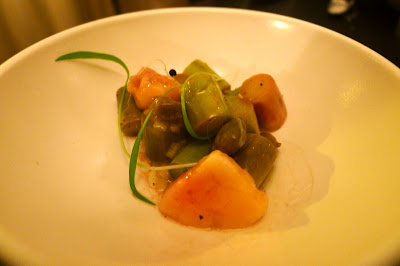 The next course was my favourite of the amuse, White and Green Asparagus with plump caper berries and bone marrow. 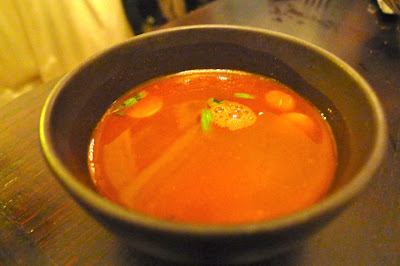 The pick of the bunch for my wife was the final amuse, consisting of a Velvet Crab Bouillon with anise and citrus flavours from fennel and French sorrel – 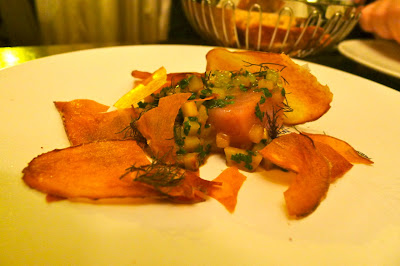 The first of the mains came listed on the menu as Bonite de Sait-Jean de Luz, pomees de terre, tandoori – the wonderful sashimi style block of bonito tuna appeared to have been seared (aburi style, with a blow touch) before being topped in a fine dice of herb and tandoori spiced potatoes and thin fried slices of pommes de terre (otherwise known as crisps). 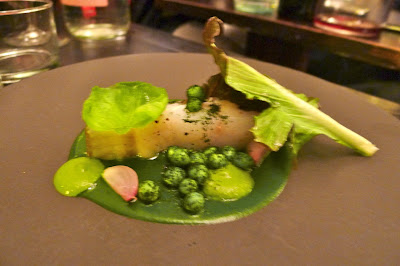 The next, vibrantly colored course to come was the Barbue, cresson, petit pois – this time, the delicately cooked brill was paired with a watercress velouté, peas lettuce, shallots and what also seemed to be a dusting of dried seaweed, possibly wakame - a simple, yet stunning fish dish. 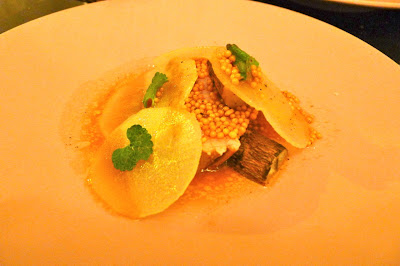 The meat main of Vueu, poire, beurre noisette or ‘veal, pear, brown butter’ – as all Le Chateaubriand dishes, exceeded expectation from the description. The milky sous vide veal was sublime; the slices of pear added a freshness, salsify cooked with its skin on an earthiness and the mustard seeds crunch and mild spiciness – another excellent course. 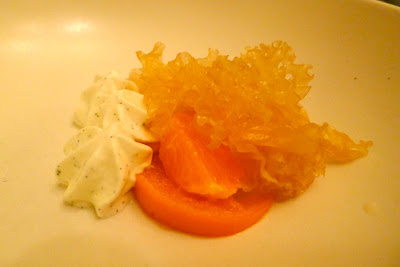 For our first dessert, Clémentine, rhum, vanille – the clémentines were served in their natural state and as a confit with a vanilla rich whipped crème Chantilly. An unusual component on the dish was a beautifully rum soaked ‘Chinese white mushroom’ that has several common names, such as ‘silver ear fungus’ or ‘jelly fungus’. Usually sold in dried form, these mushrooms have a beautiful translucent white appearance and feathery sponge-like structure when rehydrated. Whilst there is not a strong mushroom taste (especially when rum soaked), they have a wonderful, almost tripe like bite and are supposedly very good for curing a number of ailments – a real treat to see them used outside Chinese cuisine. 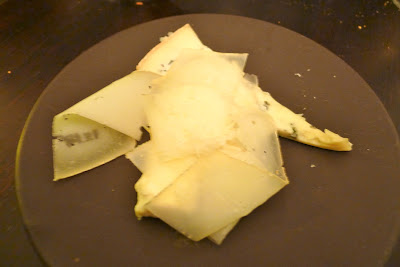 Fromages du jour was my chosen dessert – I liked the simplicity of the presentation, no frills, no condiments; just three good quality French cheeses that I think may have been Berger Bleu des Pyrénées, Brillat Saverin and Ossau Iraty. 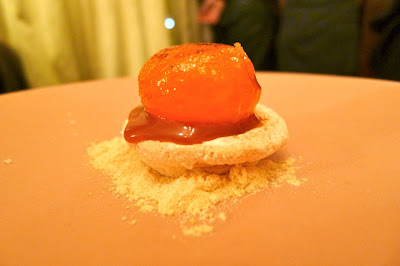 My wide opted for Chef Iñaki’s interpretation of the Andalusian classic, Tocino del Cielo, featuring a sweet, rich candied egg yolk set over a pastry base. Translating as ‘bacon from heaven’, it is said that these desserts were originally made for sale by nuns from the egg yolks left over from Sherry production in Jerez de la Fronteta – the holy reference may come from this or their Heavenly taste. 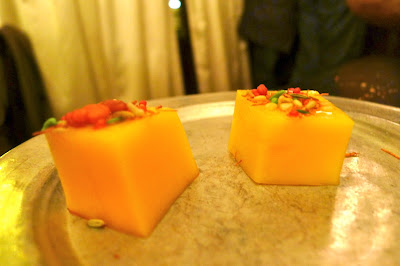 To end the meal, a cube of Sugap Poached Mango dusted with ‘Pan masala’ – the candied fennel seeds that you sometimes see served after Indian meals. Also called ‘Sweet Saunf’ or ‘Mukhwas’ (another portmanteau, of ‘mukh’ meaning mouth and ‘vas’ meaning smell.) they are supposed to act as a digestif and breath-freshener. 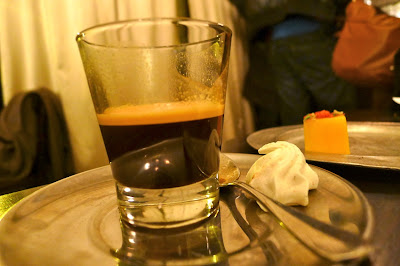 We left at ten to eleven; some people had been queuing for over an hour and a half at this point. I suppose that’s a fair price to pay to eat in the ‘The World’s 9th Best Restaurant’ and to experience a true French bistro of the type only found is Paris. A final thought: does the hype make the experience or does the experience make the hype?