When, in 2002, Chef Simon Rogan decided to move away from the capital and open his first restaurant as chef/proprietor in Cartmel (a small Cumbrian village previously known for its racecourse, priory and sticky toffee pudding), the move was considered by cynics as risky to say the least.

One early obstacle was to convince the locals to try L’Enclume’s long tasting menus of ‘experimental dishes’; another was to lure people from further afield - word of mouth and ultimately a Michelin star and a ‘Newcomer of the Year’ Catey in 2005 helped. 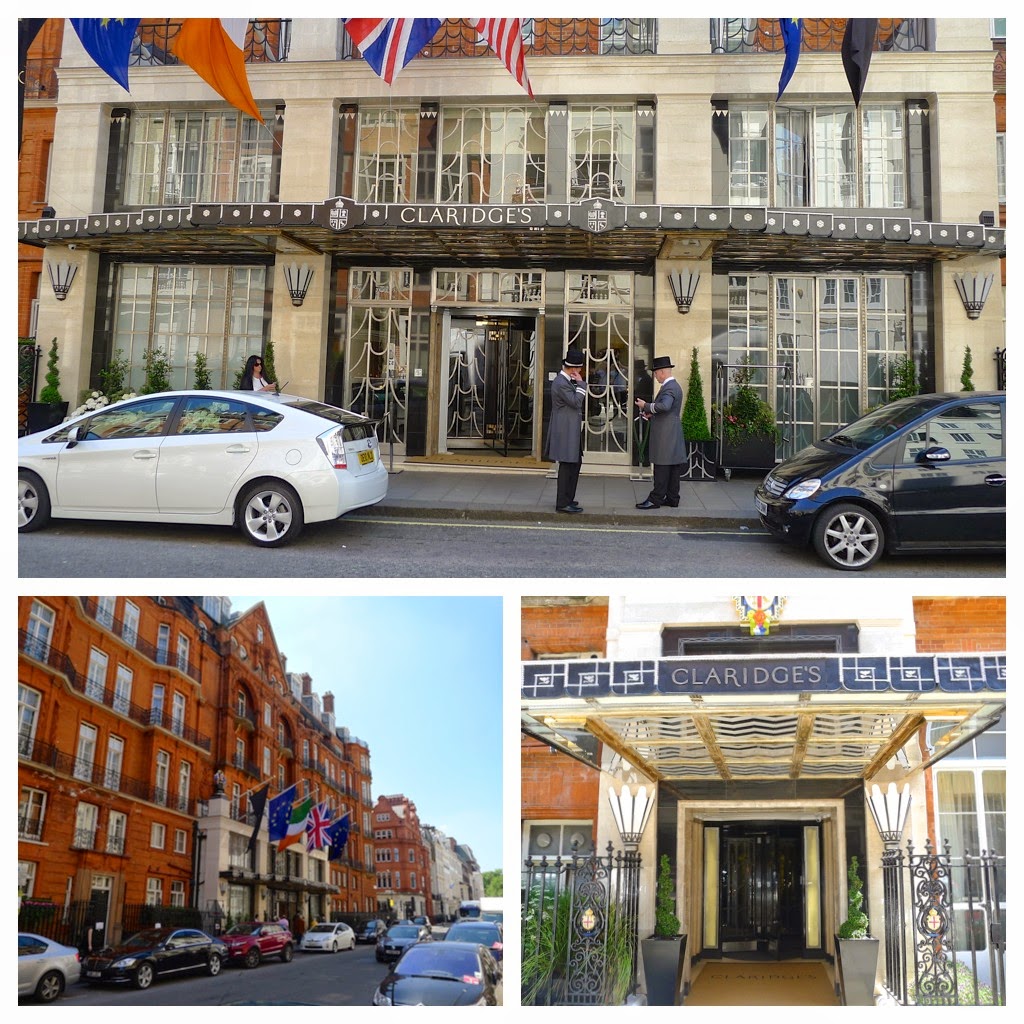 Time has proven that the Southampton born chef is a man with enormous ambition and vision. The location, of which to the doubters initially seemed a disadvantage, has proven central to the Simon Rogan story and evolution of his cuisine.

Even in the early days, before the Rogan ethos was fully formed, ‘forgotten’ English herbs such as hyssop, sweet cicely and woodruff played a key role. However, it was as his understanding of the seasons and exploration of the natural larder that surrounded the restaurant grew, so did the impact of the terroir on the menus. 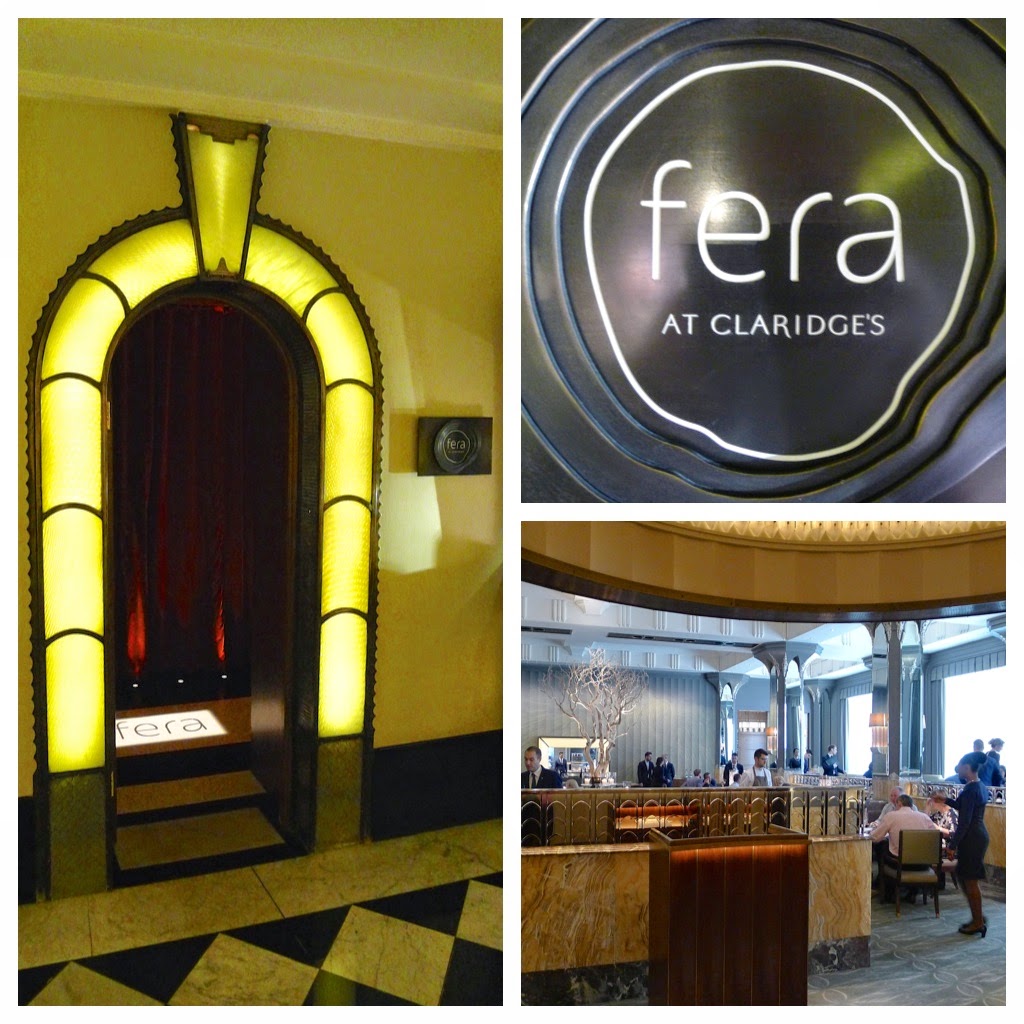 In 2010, the rapidly expanding Rogan operation, now with a second restaurant in Cartmel (Rogan & Co.), acquired their first farm. A year later, with one Roux Scholar (Mark Birchall) as Head Chef, Simon employed another young Roux Scholar, Dan Cox, to head up their Aulis Development Kitchen and oversee operations at the new, much larger, farm.

Over the next couple of years, the awards, developments and accolades came fast and furious for Simon and his highly skilled team – highlights included: a return to London with his two year “pop-up” Roganic; a win on TV’s Great British Menu; 10/10 scores in the Good Food Guide and a ranking as the UK’s Best; the acquisition of Simon’s local The Pig & Whistle; a second Michelin Star at L’Enclume; two new restaurants in Manchester (The French and Mr. Cooper’s House & Garden) and a couple more Cateys as ‘Restaurateur of the Year’ and the prestigious ‘Chef Award’. 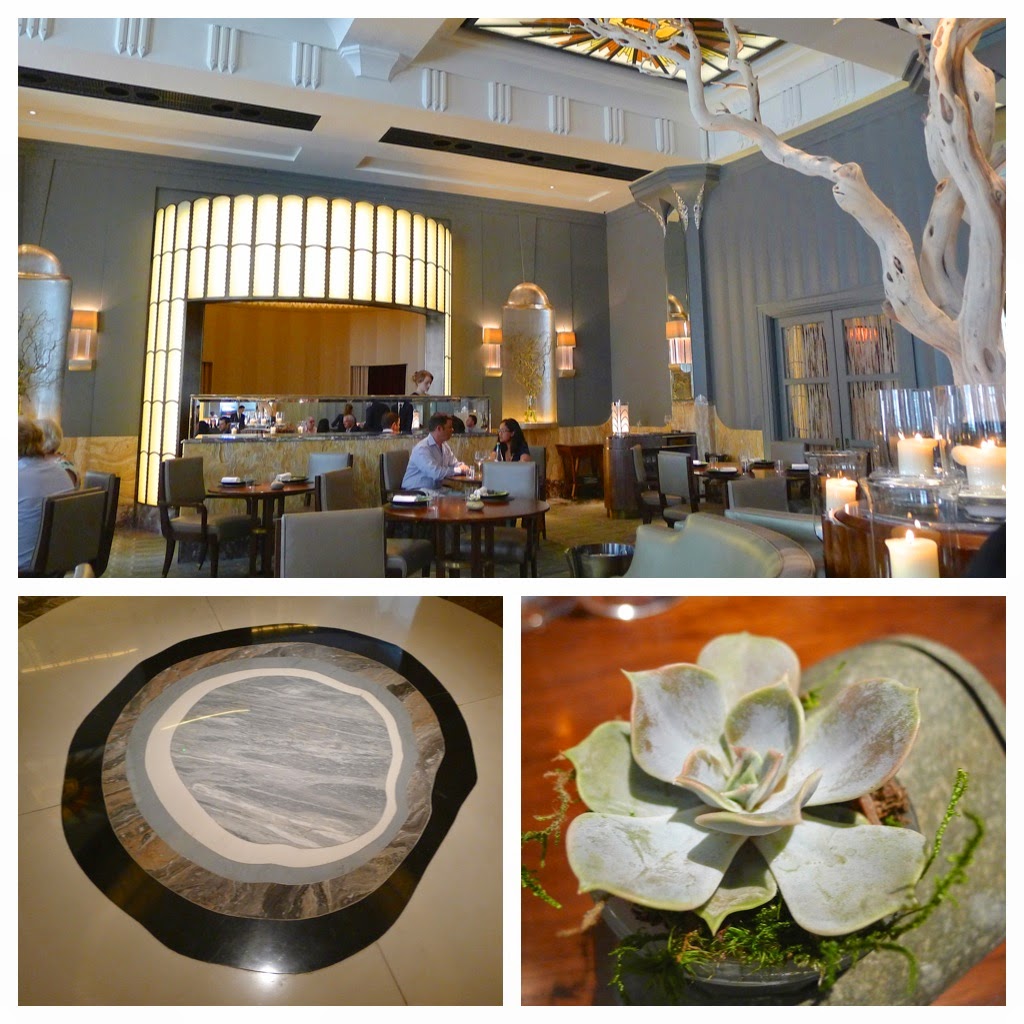 All these amazing achievements eventually contributed to Claridge’s naming Simon, ahead of some of the ‘biggest named’ international chefs, as the man to maintain their reputation as one of the grandest hotels in the world. Dan Cox was duly appointed as Executive Head Chef with Andrew Tomlinson from Roganic as Head Chef.

I know Simon’s food very well – looking back through my blog posts you will see that I eat in at least one of his restaurants on a monthly basis and have been lucky enough to have visited the all important farm on several occasions. He has his own creative style that showcases British produce and despite using cutting edge culinary techniques manages to remain rooted in nature. 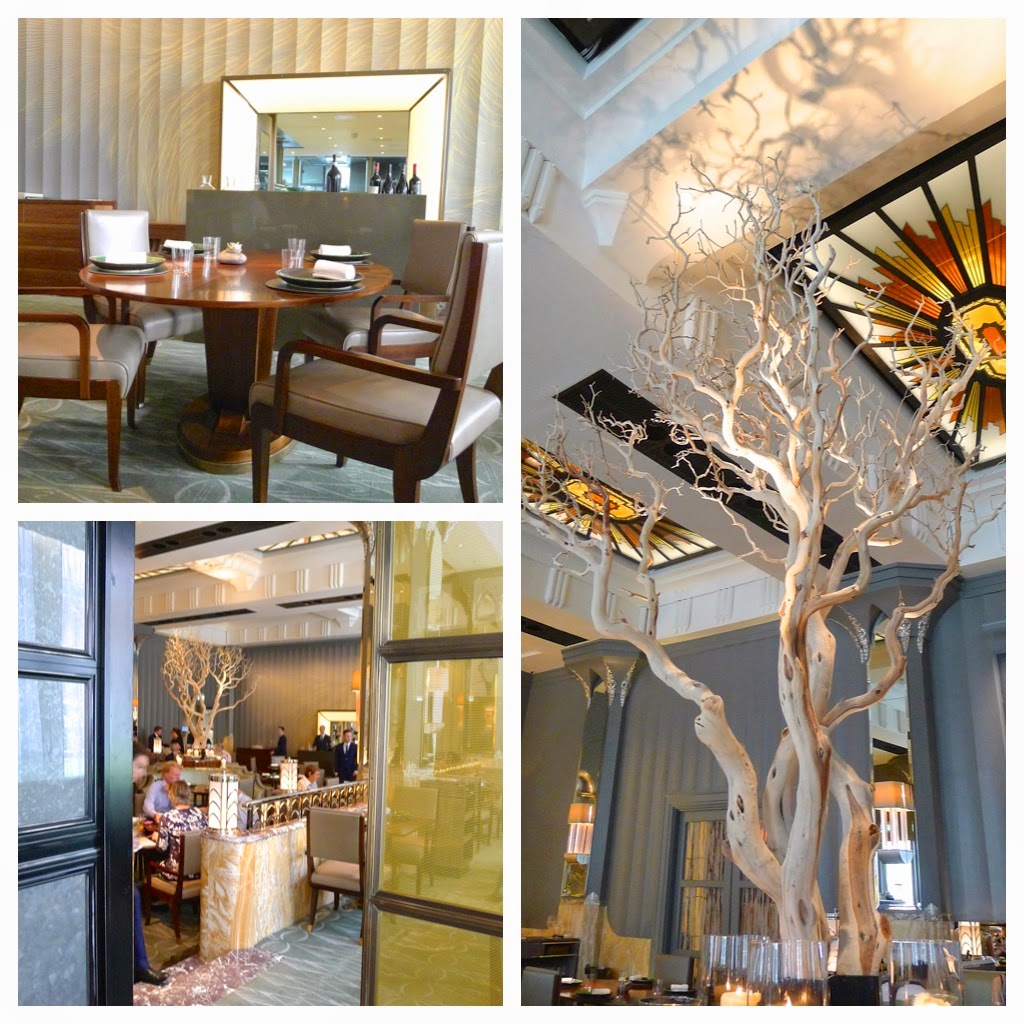 When I was first heard that Simon was taking over The French at The Midland Hotel, I had my doubts as to how the L’Enclume experience would ‘translate’ but I was quickly won over. So much so that when the Claridge’s collaboration was announced, I knew this would be the perfect pairing.

Few hotels and dining rooms in Britain carry as much history and expectation as Claridge’s - at L’Enclume, Simon’s progressive food has always managed to form a synergy within the thick rustic whitewashed stone walls of the former 12th century smithy – in the grand art deco room so far from its Cumbrian roots the same synergy resonated for me. 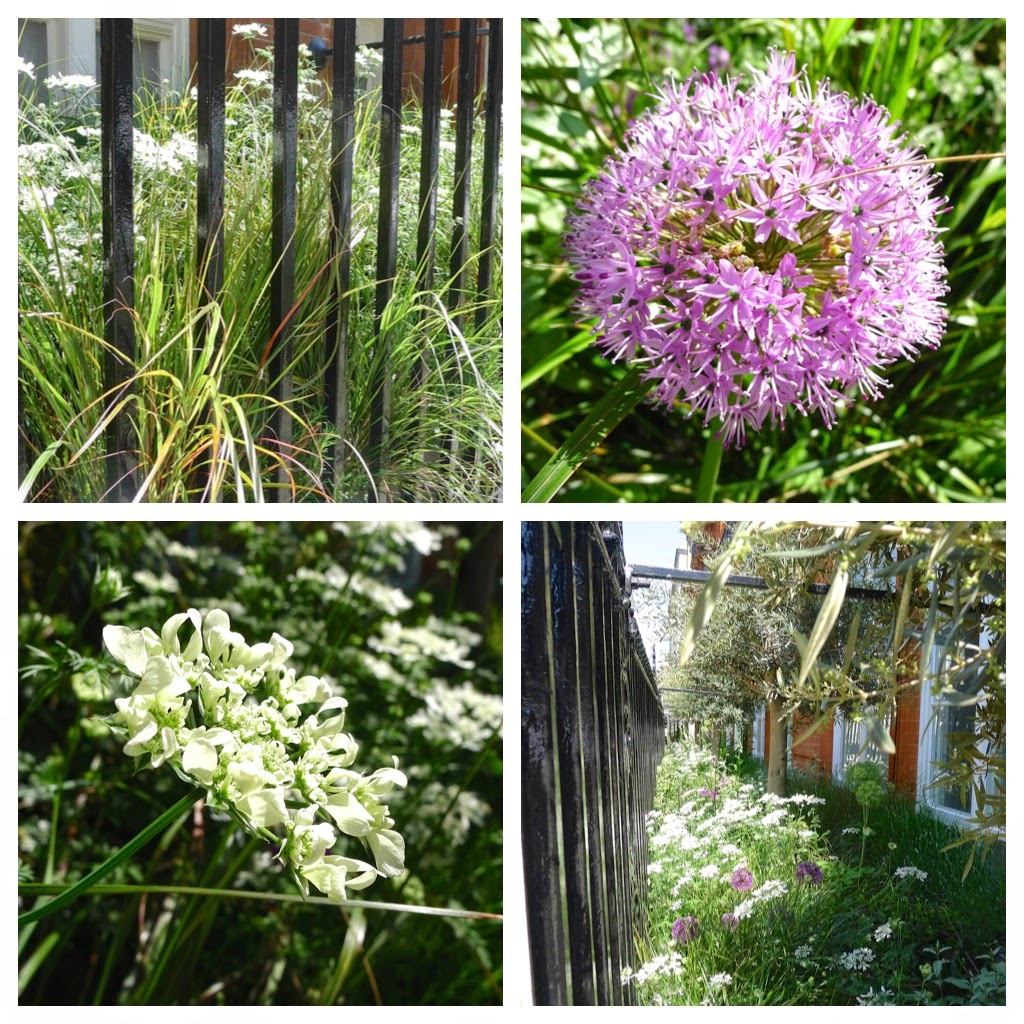 Herbs, flowers and micro cresses are all ‘on trend’ in restaurants these days but to my mind no British chef has the same understanding of these as Simon Rogan – every tiny speck of green and each petal is not just there for its visual beauty but adds a subtlety of flavour and leads the diner like a garden path throughout the courses.

At Claridge’s, Simon’s food is on the world stage - panellists from the World’s 50 Best Restaurants are much more likely to visit London than they are the north of England – and no secret has been made of the desire to push for three Michelin stars.

High expectations with regard to setting and service were blown away. From the moment we arrived the attention to detail was instantly evident, from the inlayed marble ‘Fera’ motif on the floor in the foyer to the hand painted foliage on the back wall. 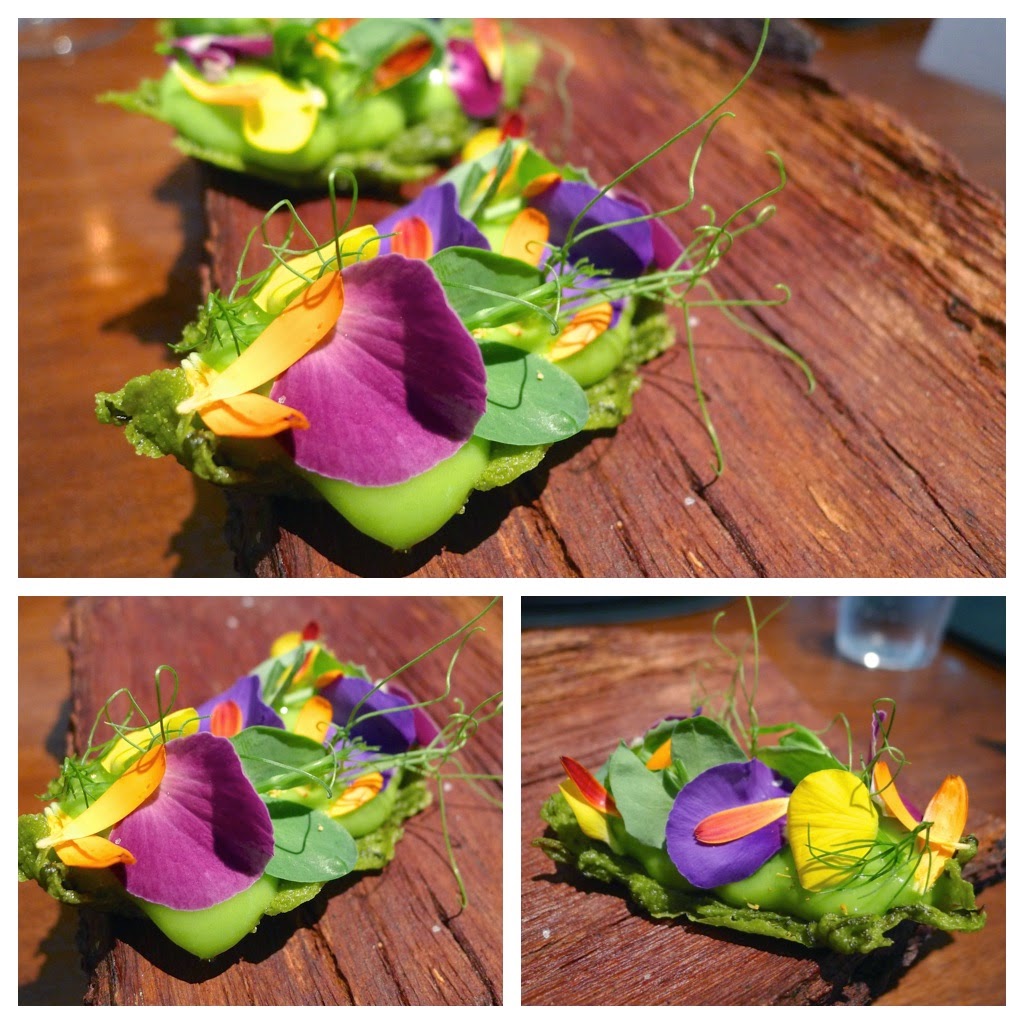 Pea wafer, fennel and flowers – for me, the series of ‘snacks’ at the start of Simon’s tasting menus are often my favourites. They come thick and fast and are frequently the most visually beautiful but mostly I enjoy the little bursts of flavour and variety of textures. 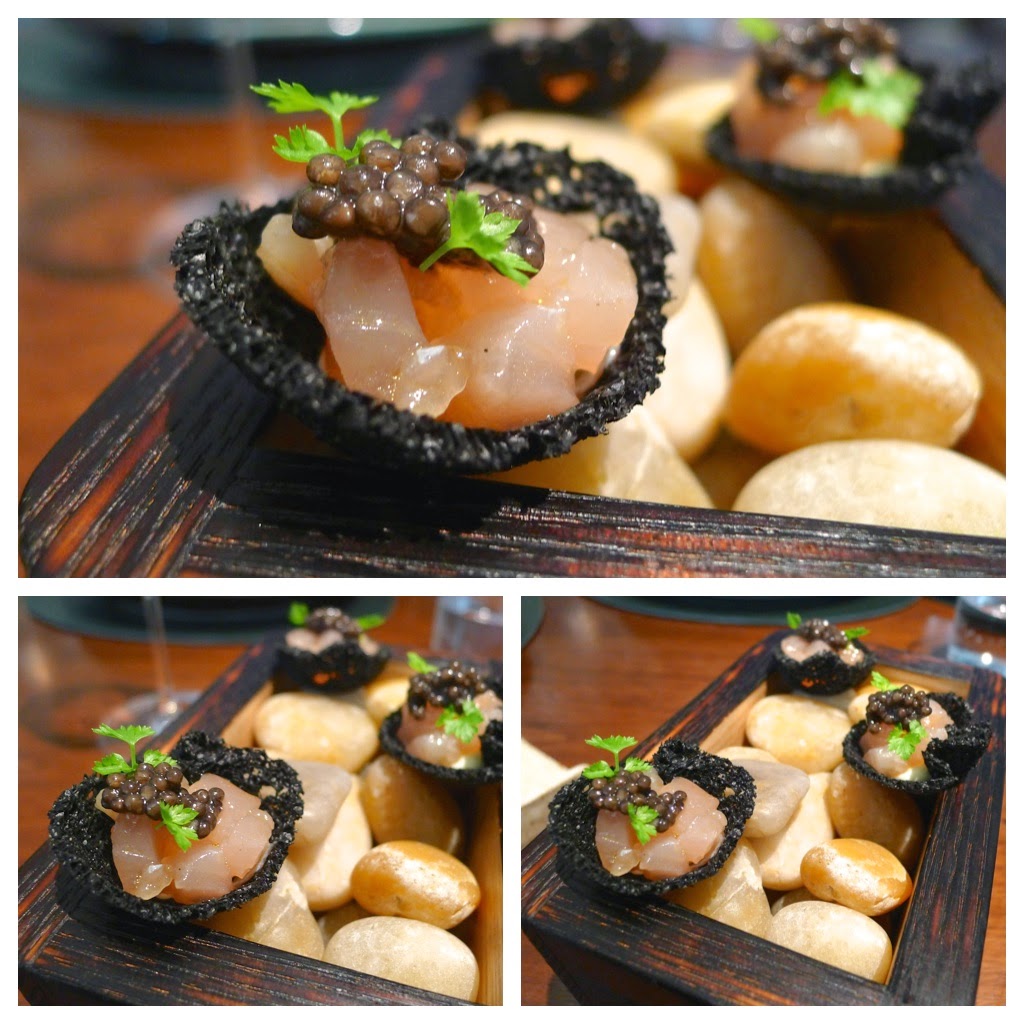 Mackerel, caviar, seawater cream – bestowed in a squid ink wafer with a seawater cream, these components were and had to be light enough so as not to compete with the exquisite flavours of mackerel and caviar. 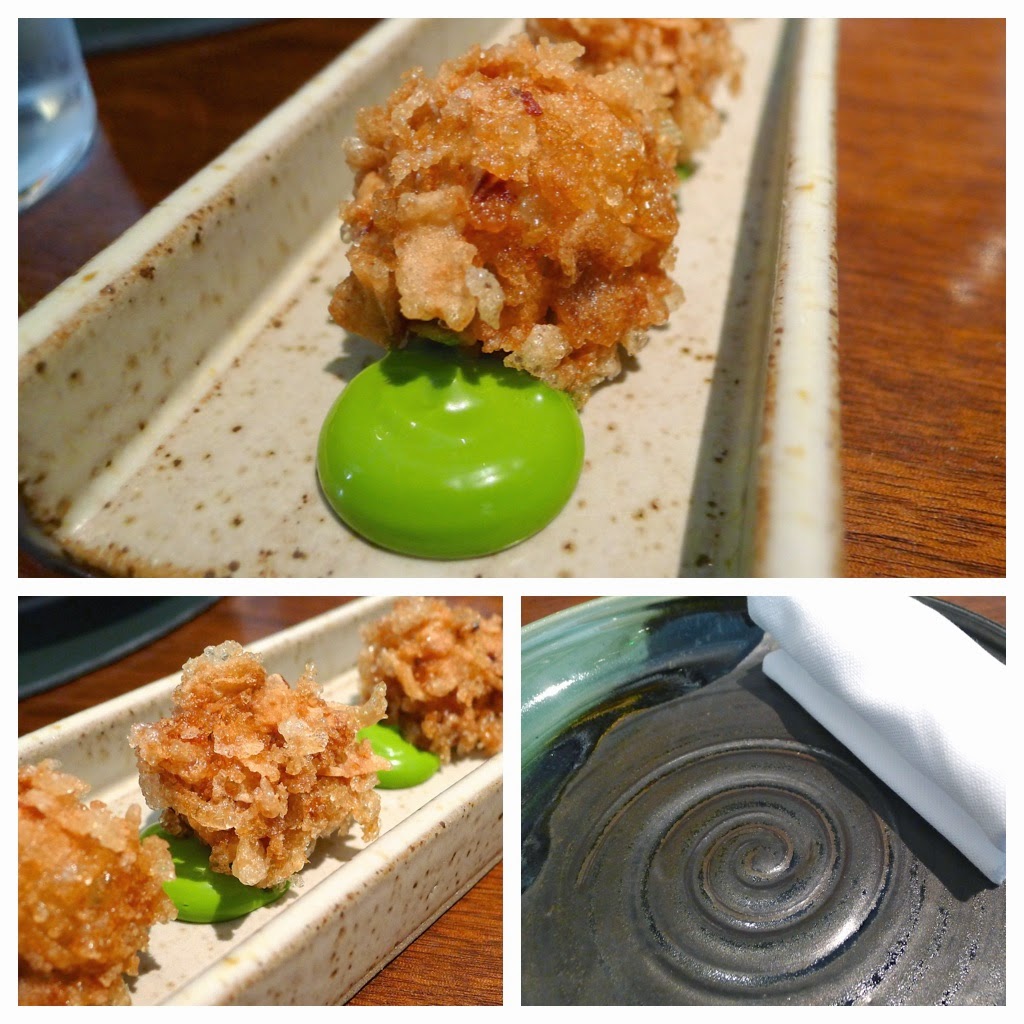 Stewed rabbit with lovage – encrusted in a crisp crumb, this could be considered one of the poshest and tastiest takes on ‘chicken nuggets with dip’ that you’ll ever eat. 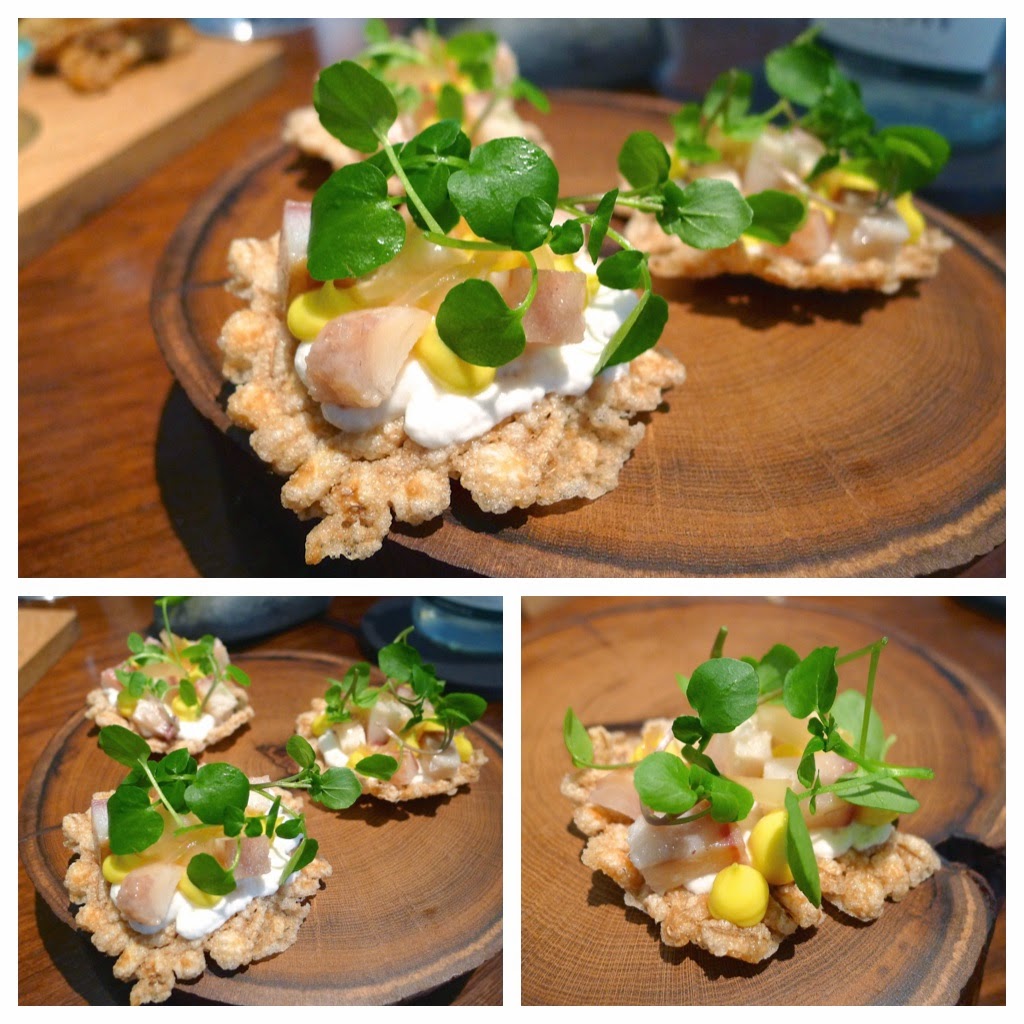 Puffed barley, eel, watercress – you can’t go wrong with eel in my mind; another tasty snack. 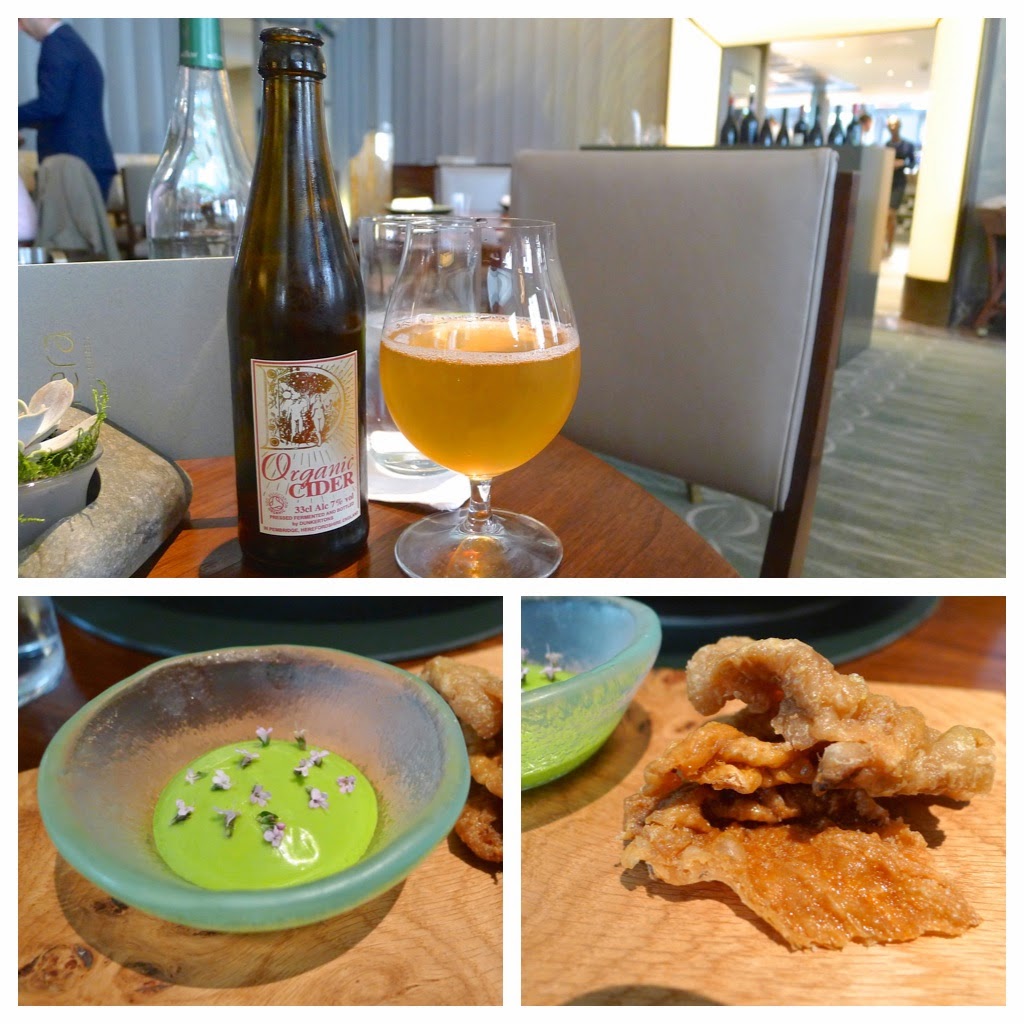 Chicken skin, thyme, roasted garlic – the chicken skins were well seasoned and had good crispness. The accompanying thyme and roasted garlic dip paired well but a picky me would call for a bolder hit of garlic. 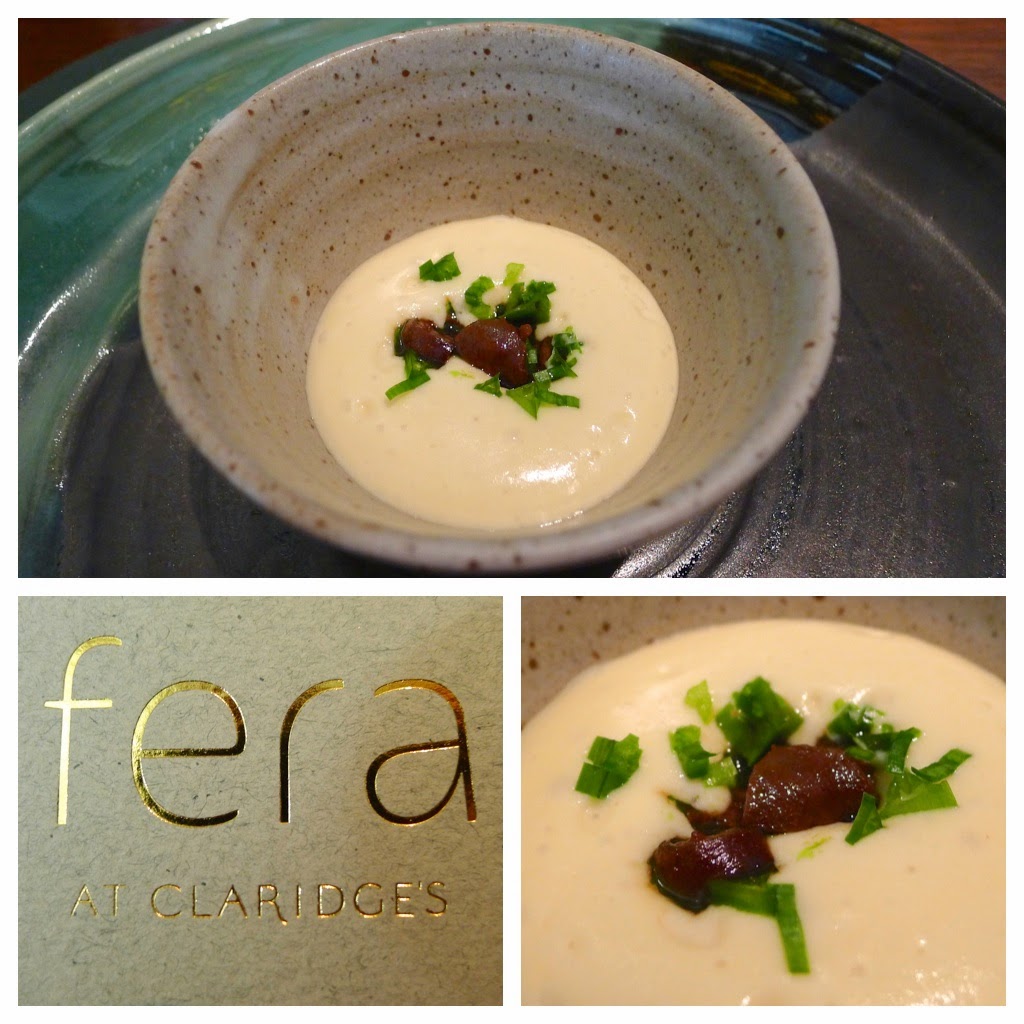 Winslade, potato, duck heart – amongst the three of us dining (my wife and stepson being the other two) this was acclaimed as one of the best dishes – rich duck hearts and sauce swathed in a warm, light, airy potato mouse with Winslade cheese and triangular garlic. 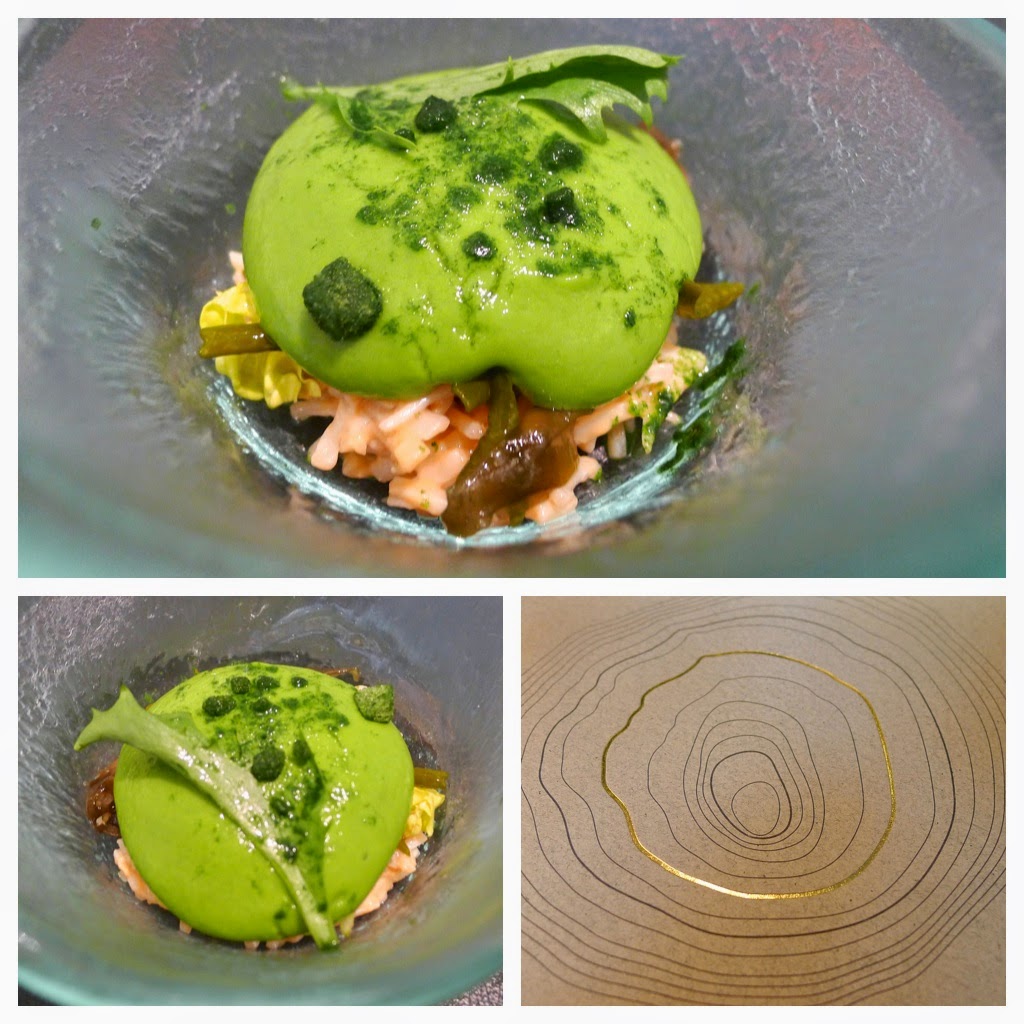 Portland crab with lettuce and seaweed – another strong dish that we all enjoyed. I’m a big fan of seaweeds and love when varieties available on the British shores such as carrageen and dulse are used. 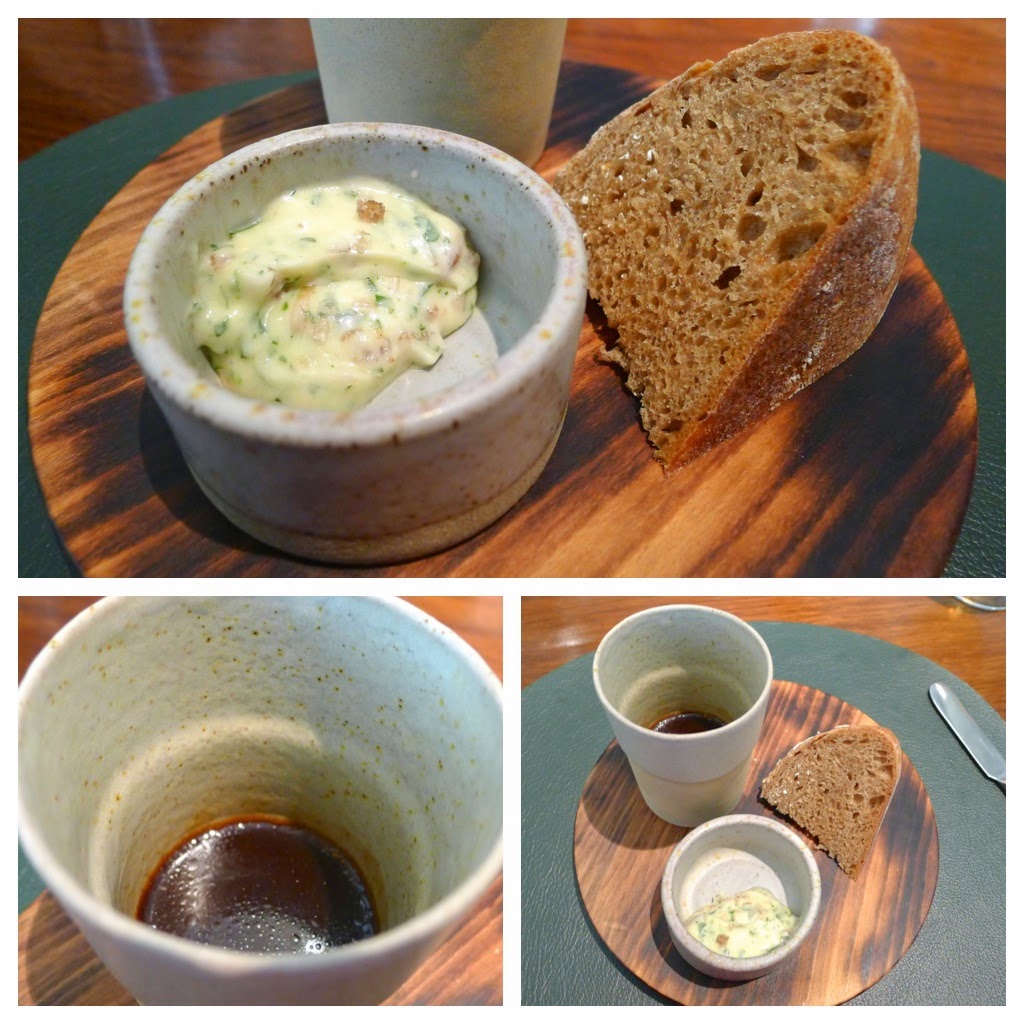 Beer bead with bone marrow butter and mushroom broth – it is often a challenge for high end restaurants to make their bread offering truly outstanding. Most go for a flavoursome sourdough; others opt for a wide selection and a few try to create something singular and altogether more memorable – the bread itself has a deep malty flavour and good structure; the accompanying mushroom broth, as described by our waiter, the excellent Jack Settle (formerly of Bubbledogs Kitchen Table, was certainly intensely flavoured but it was an insanely decadent herb infused bone marrow butter that really made this course sing. 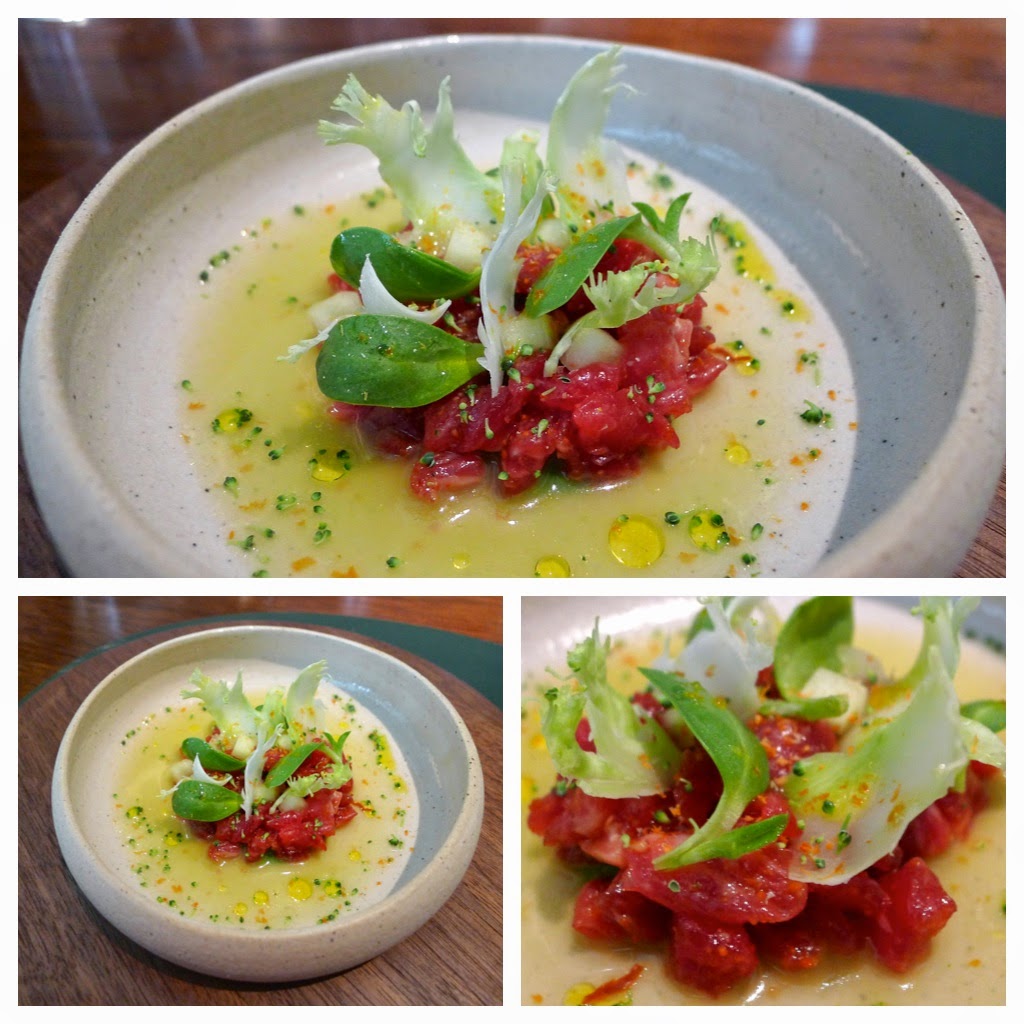 Raw beef, smoked broccoli cream, scallop roe, acidic apple juice – so used to eating the venison and ox tartares at L’Enclume and The French respectively, which both make use of coal oil, it took me a couple of mouthfuls to adjust my expectations whilst eating this dish. Once I had, I began to appreciate its uniqueness and quality – so wonderfully fresh and vibrant on the palate. 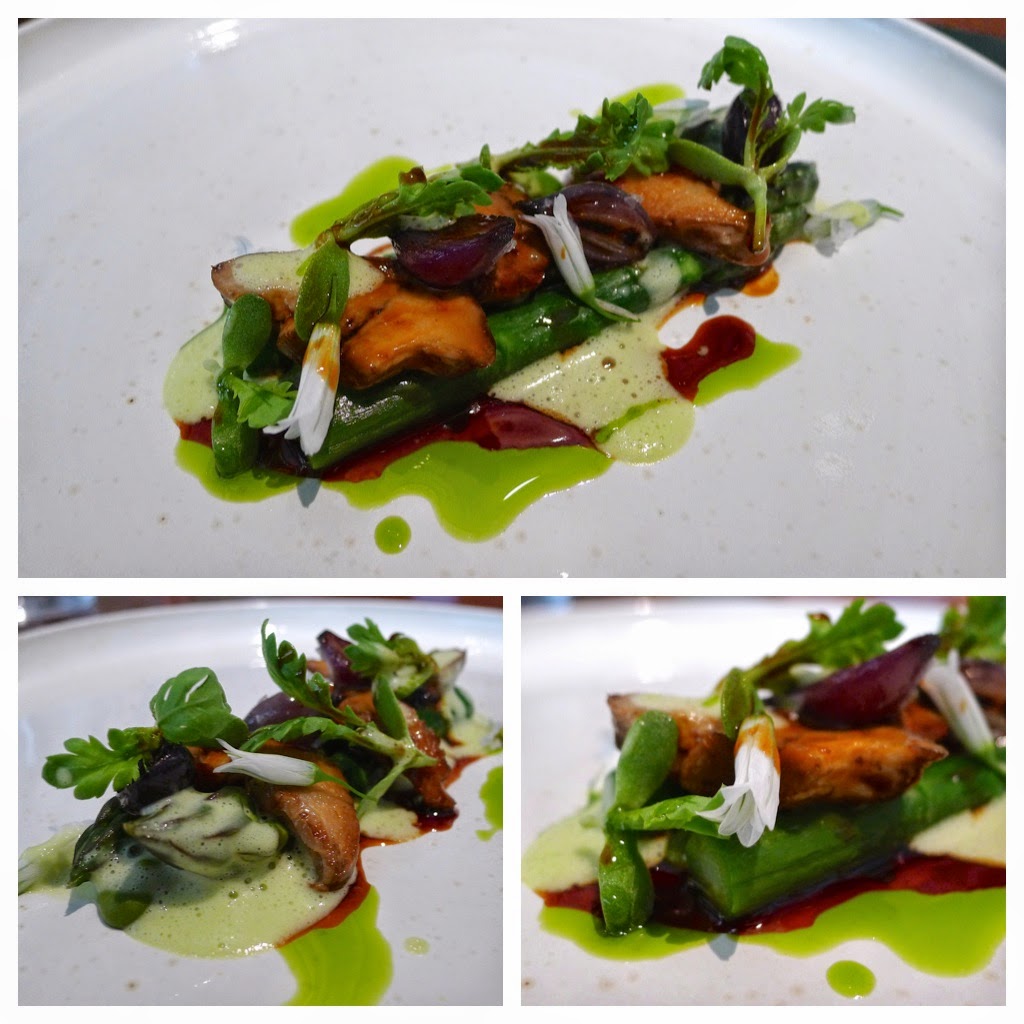 Asparagus with savoury, onions, St George’s and chrysanthemum – this, for me, was one of the weaker dishes the asparagus was beautifully cooked but the alliums and other elements bossed rather than bolstered. 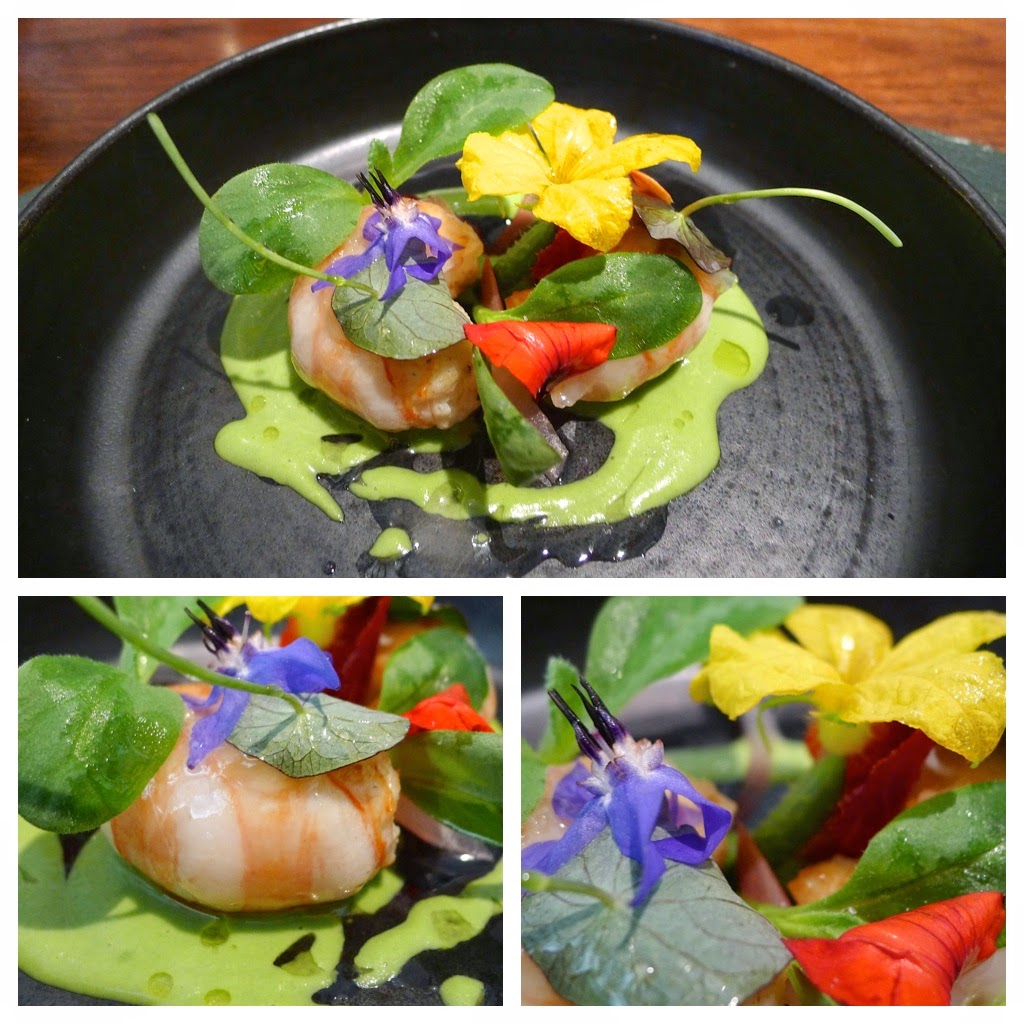 Prawns from Gairloch, prime port fat, borage and chicory – on this dish I found the ‘greenery’ of the borage, chicory and dinky cucumber with its flower worked much more harmoniously with the main component of the dish; the plump pork fatback glazed langoustines from the cold waters of the North Atlantic. 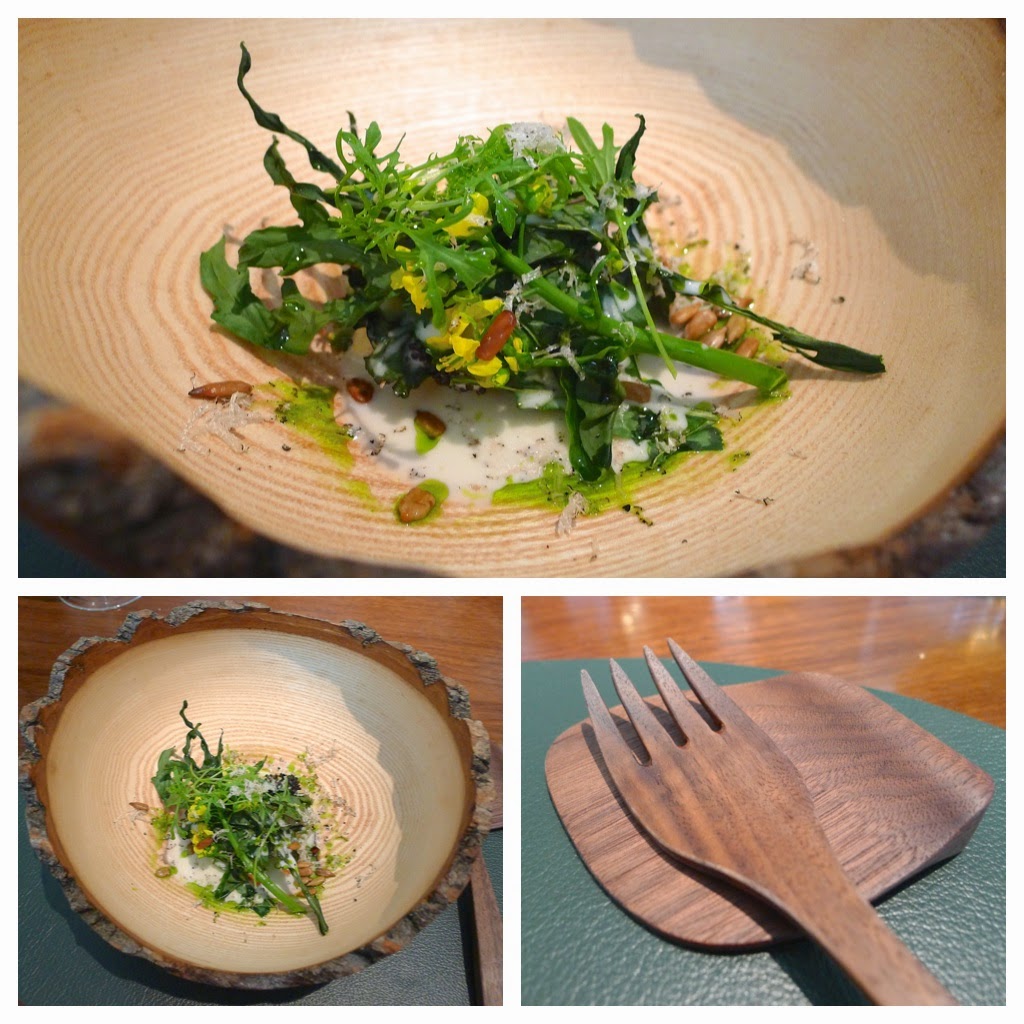 Grilled salad, Isle of Mull, Truffle custard and sunflower seeds – the salads at The French an L’Enclume are often my favourite dishes, despite the most gorgeous of carved bowls and interesting eating utensils this one did not wow as much as expected. It is based on the dish that Simon won Great British Menu with so should be a showstopper. I enjoyed the truffle custard flavour and the cheese worked but expected a little more ‘grilling’ to give those burnt bitter notes to contrast and set off with these elements. For me, the dish also needed a little more crunch. 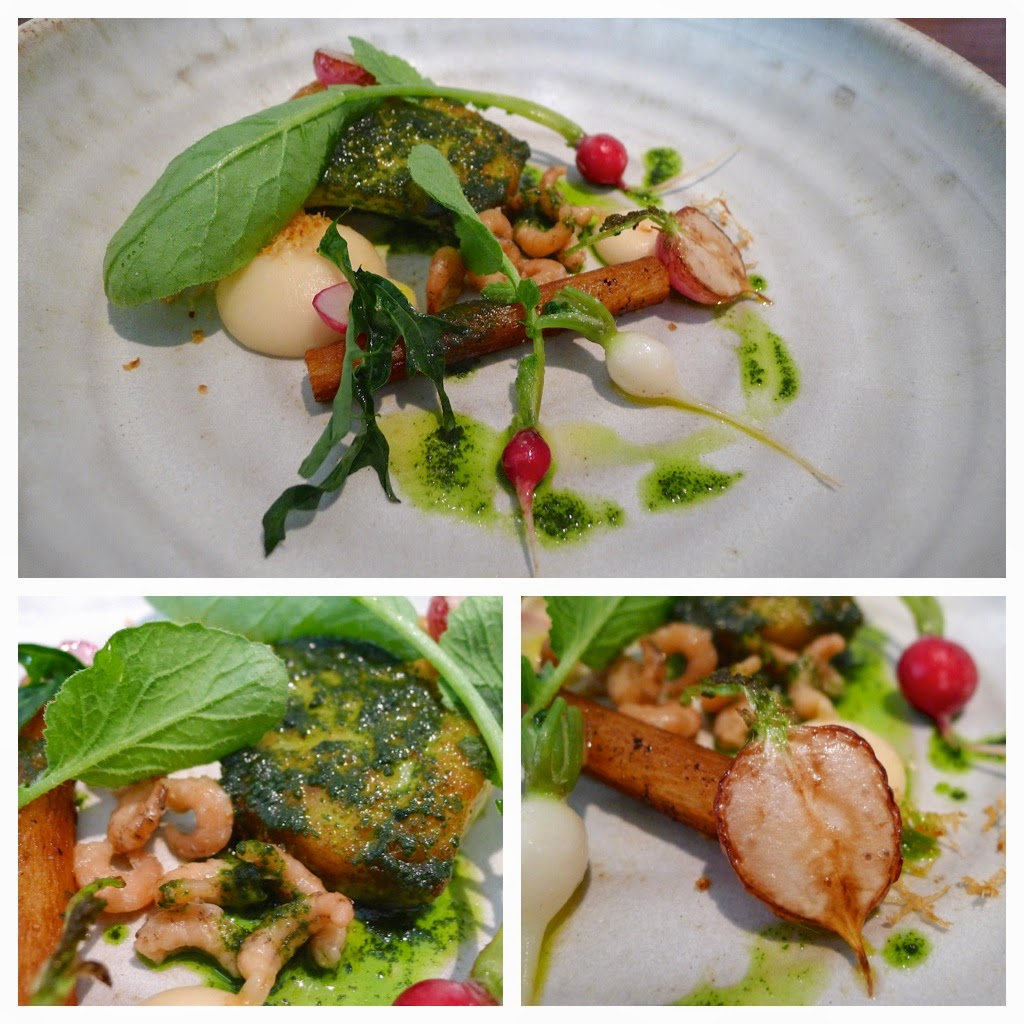 Plaice braised in nettle butter with radishes, shrimps, horseradish and salsify – although the radishes, plaice, shrimps and nettle butter all played their part, the star here for me was the salsify which appeared as a braised root and a cream; a crazily underrated vegetable. 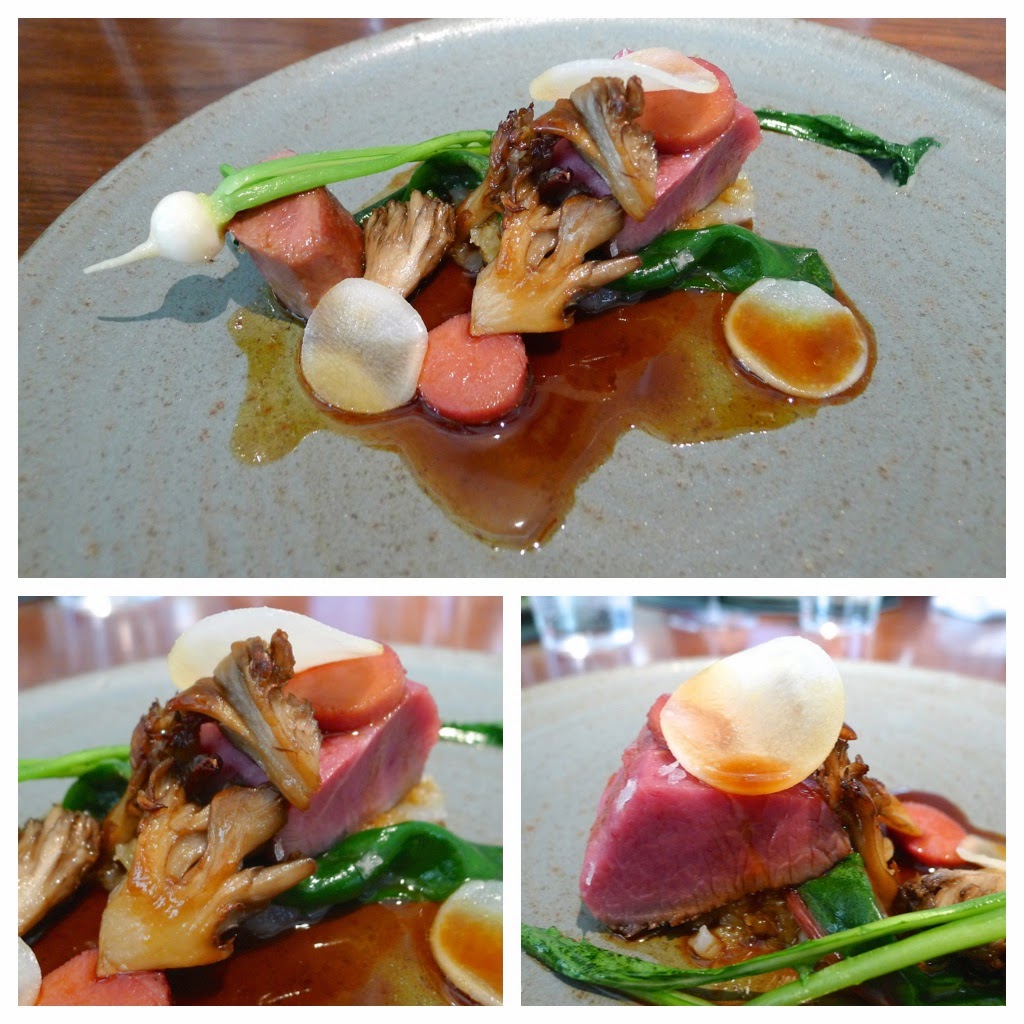 Dry-aged Herdwick hogget, pickled tongue, hen of the woods, turnips – a classic Rogan style dish, making use of the rich gamey meat from the ‘mature lambs’ of a native Cumbrian breed of sheep raised on the wild fells; the pickled tongue added welcome a smack of acidity. As an added note, no one does turnips better than Rogan. 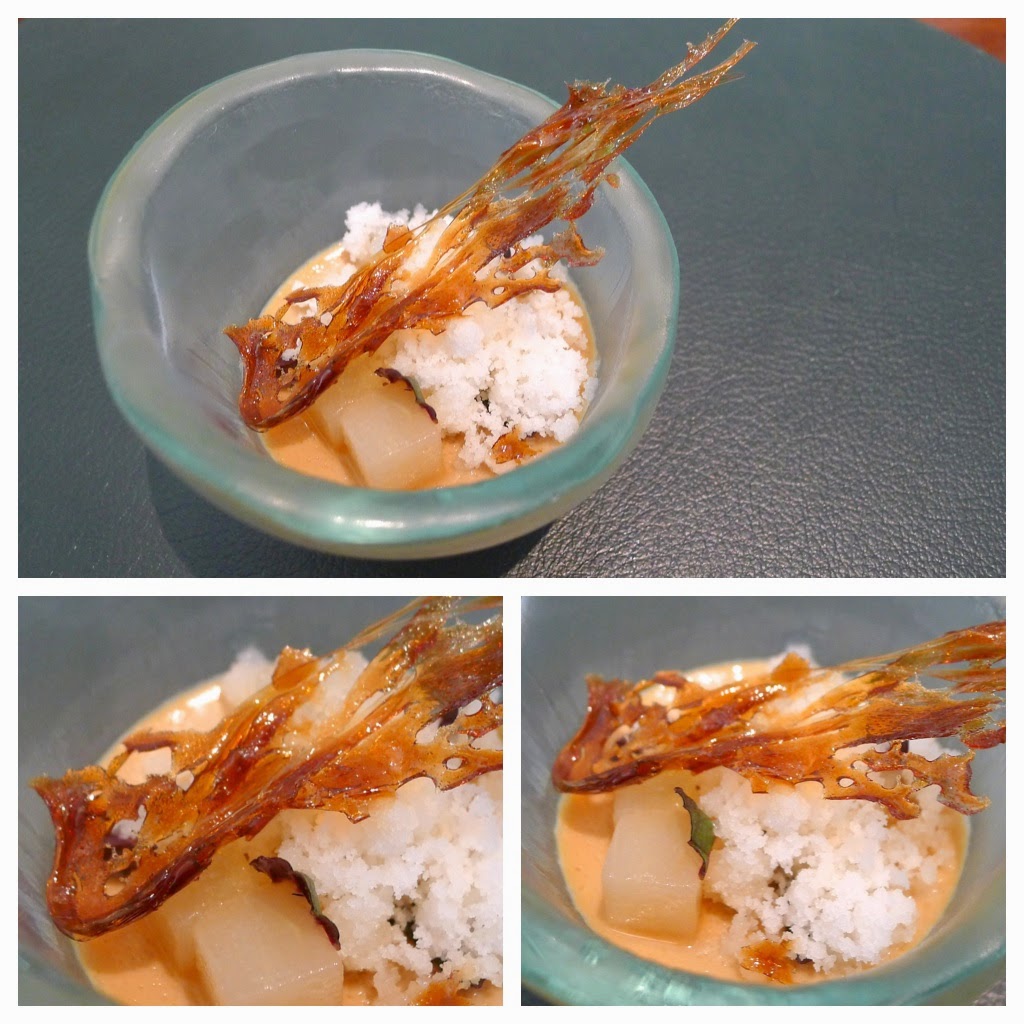 Baked yoghurt, pear poached in perry, mint and muscovado – at L’Enclume and The French the ethos of using only British ingredients is something I usually embrace; drinking Nyetimber wine or a cider for example. This is being ‘relaxed’ at Claridge’s. Here the muscovado worked so well with the other ingredients that I can ‘forgive’ this alien ingredient on a Rogan menu. 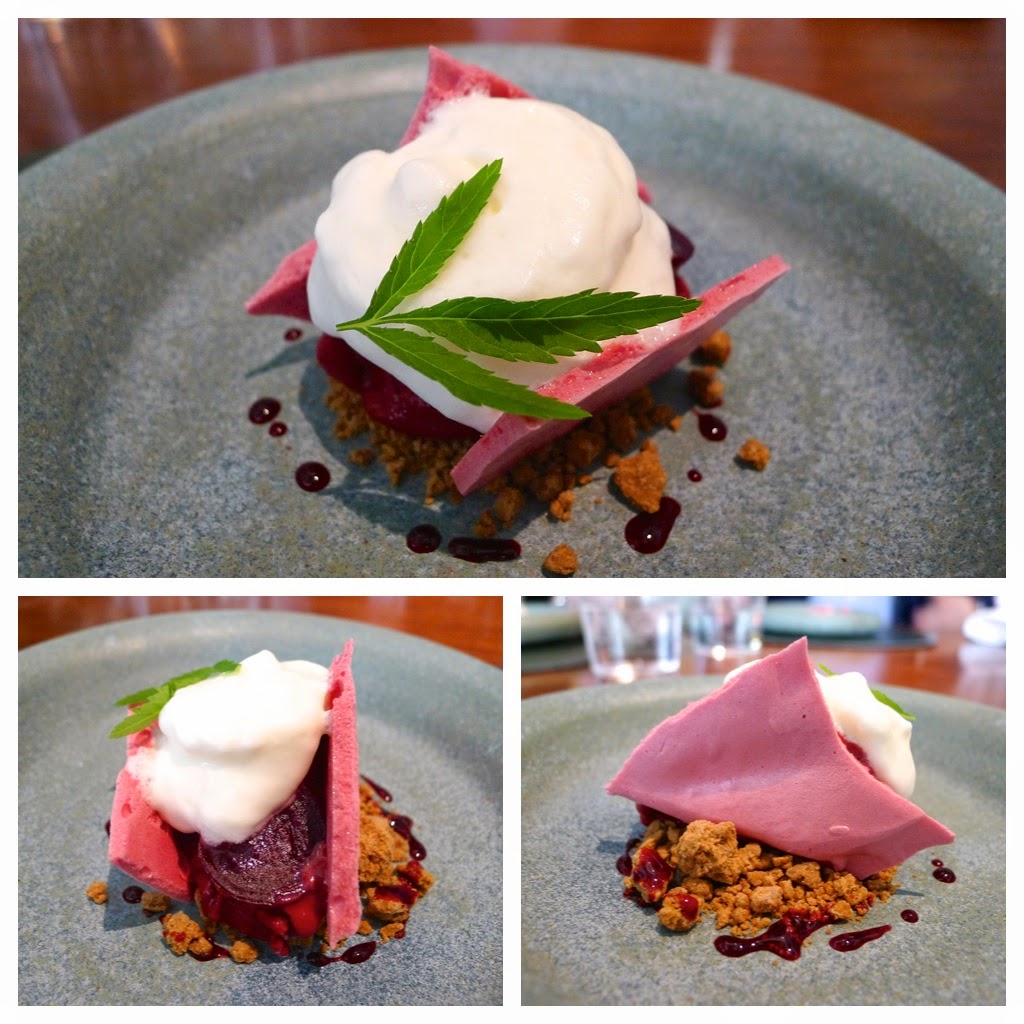 Beetroot and buttermilk, liquorice, apple marigold – at my most recent L’Enclume meal, I found a ‘savoury dish’ that contained similar beetroot meringues and apple marigold too sweet (see here). Here, with the additions of liquorice and a beetroot sorbet they met with my approval as a dessert. 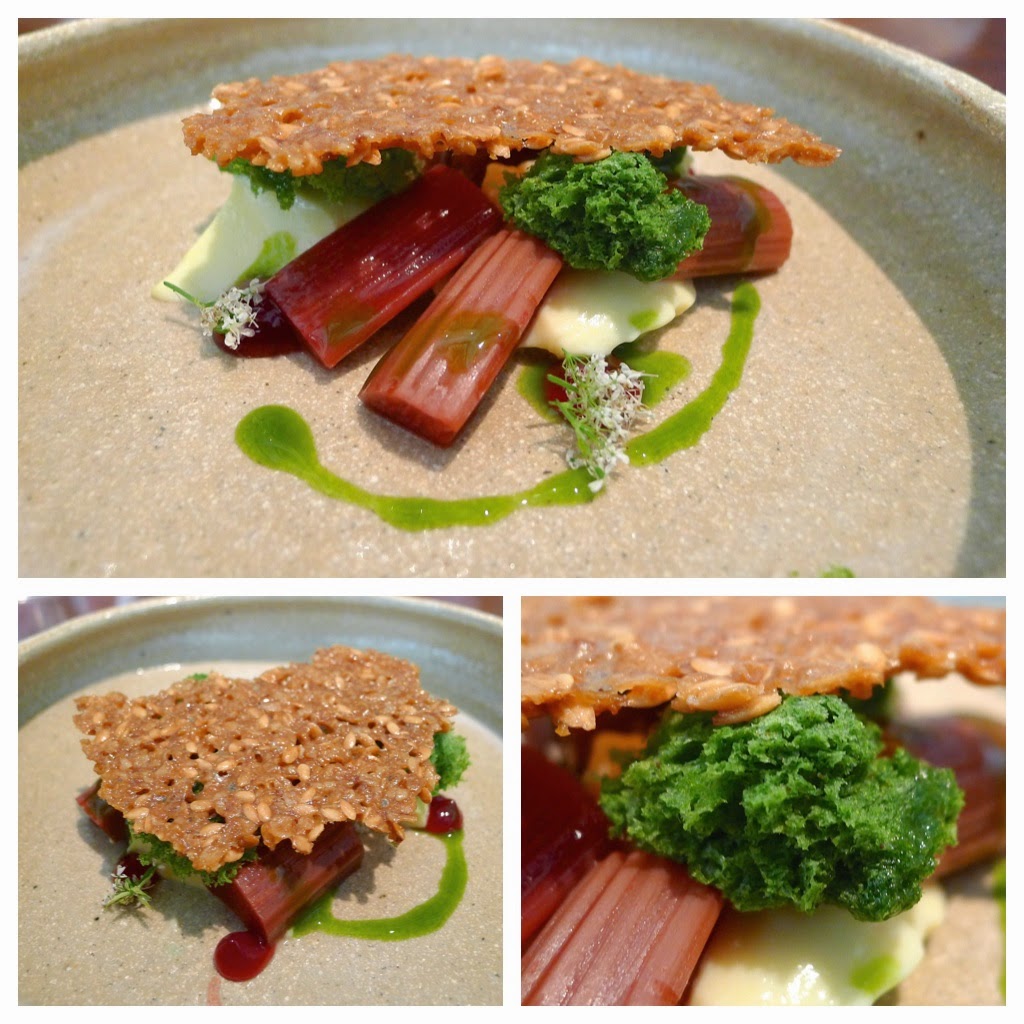 Outdoor rhubarb with melilot, linseed and sweet cicely – back of familiar territory with this light dessert of perfectly balanced flavours and textures. 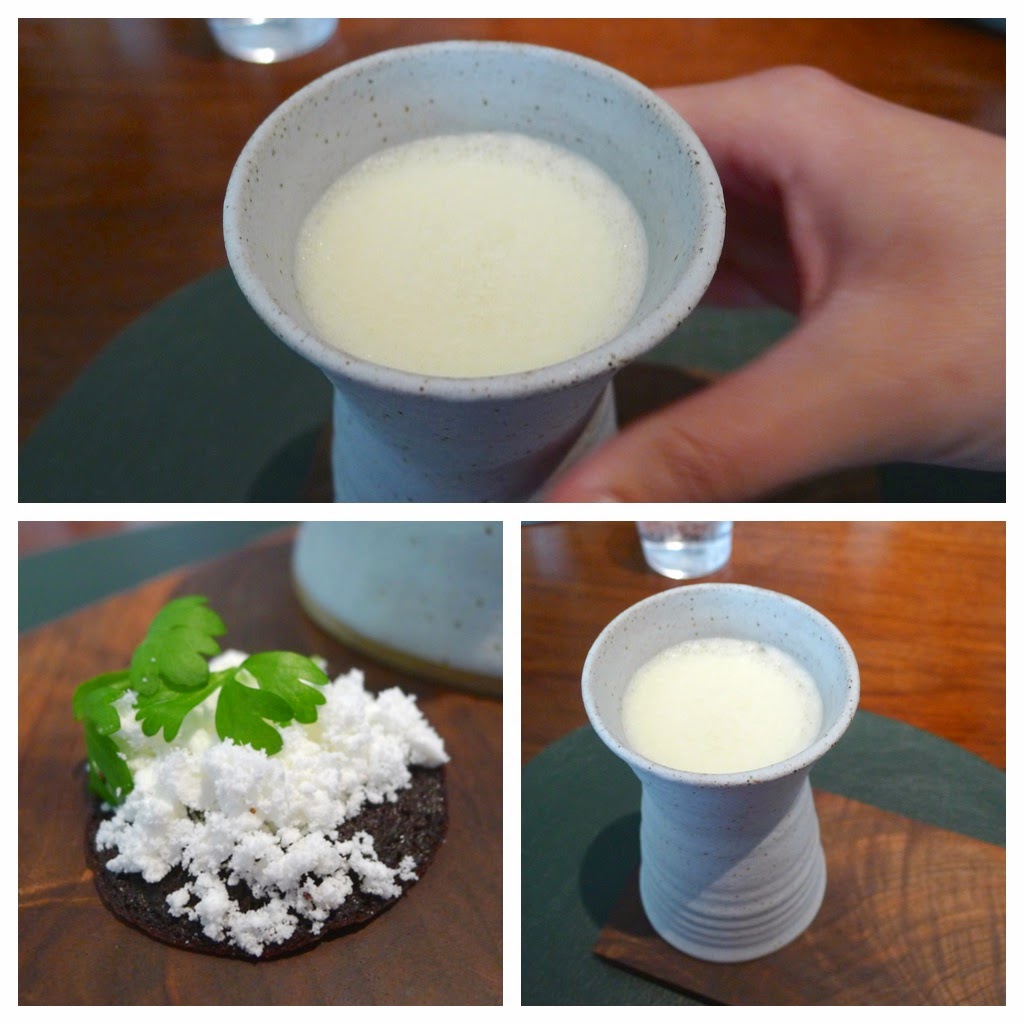 Chamomile milkshake, chocolate malt – ‘chocolate’ became the second noticeably not British ingredient on the menu; my thoughts being, if you are going to ‘compromise’ and introduce an ingredient do so wholeheartedly or because a suitable British alternative is not available. For me, unlike the muscovado used previously, the chocolate was not prominent enough to warrant its inclusion. That said, it was a refreshing dish. 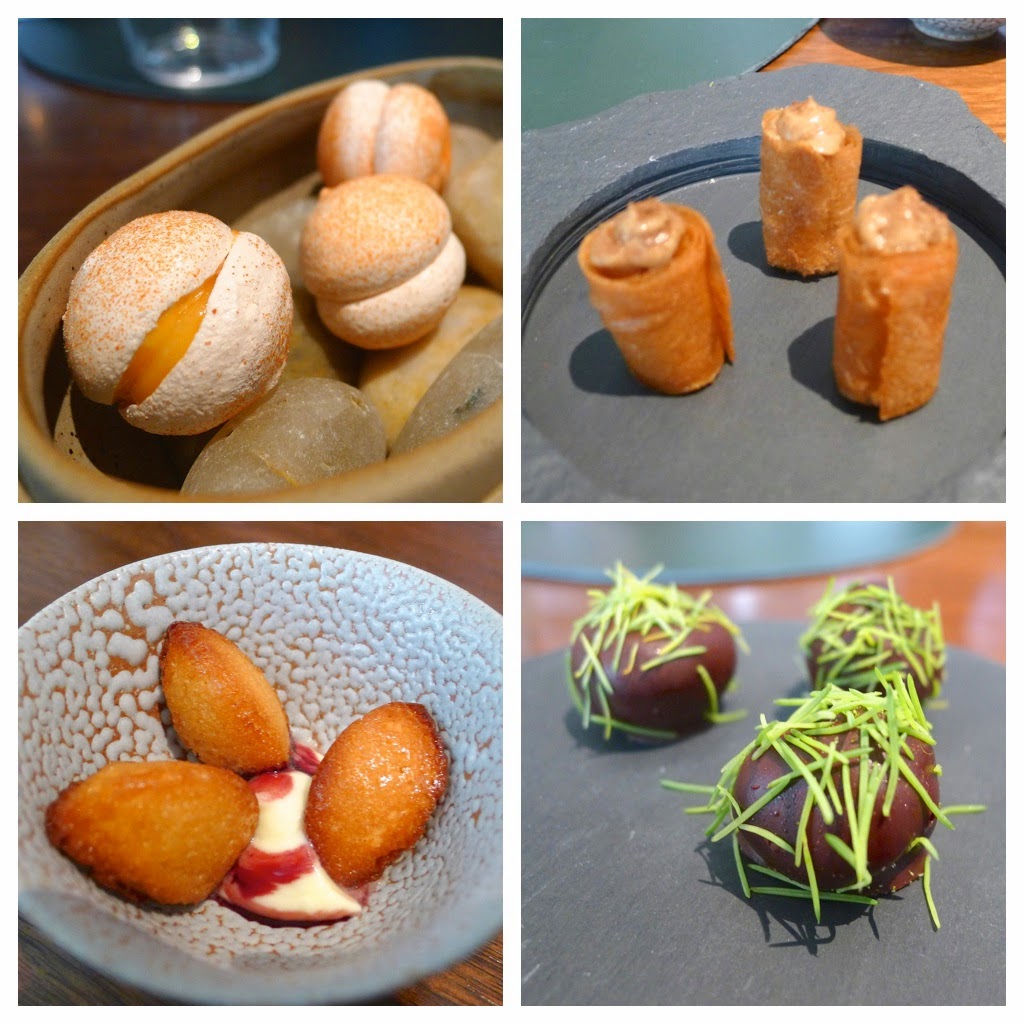 To end the meal I ordered a tea that was accompanied by a series of petits fours. These were all good but it was the tea which made me the most excited. I’ve often bemoaned the fact that far too many high end restaurant neglect their tea and coffee offering – and, often, when they do have a quality selection the staff lack the knowledge and training for their correct serving. 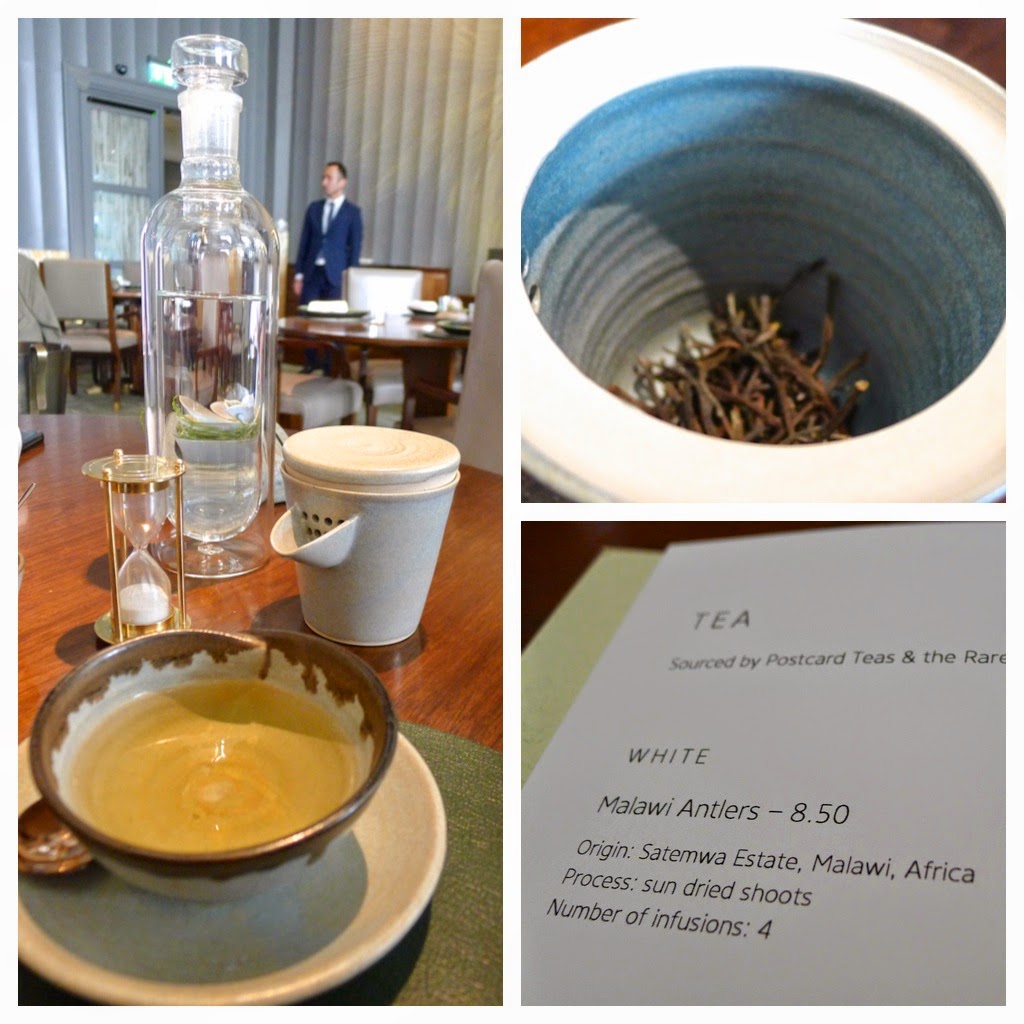 At Claridge’s, the teas are provided by Postcard Teas and the excellent Rare Tea Company. I opted for the magnificent Malawi Antlers White Tea – it is great to have tea out served at the correct temperature and steeping times.

I managed to write this without once mentioning Gordon Ramsay, the fact that “Fera” means wild in Latin or making a prediction about how many stars it will get… job done!