The French by Simon Rogan (Lunch)

I know a little bit about long distance relationships. For two years my wife and I each made monthly trips on the train between London and Manchester before (fed up of Virgin trains), I eventually even got down on one knee on a busy Euston platform to propose marriage and a move north.

For the past couple of years, Simon Rogan has been making this same 200 mile journey between L’Enclume (see here) and his London restaurant, Roganic (his first outside Cartmel). 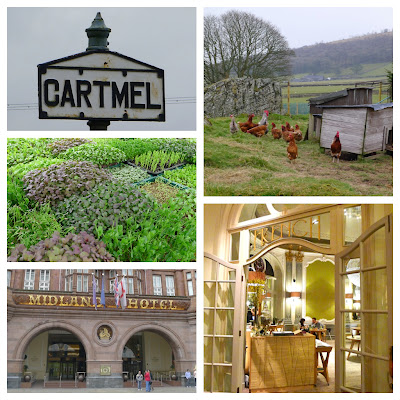 Recently, Simon has entered into a marriage or union with The French at The Midland Hotel in Manchester. The commute between here and his Cumbrian base now just 80 miles.

Earlier in the week I made this 80 mile journey myself to visit Rogan & Co (here) and his farm, which I first visited when I ate at his Aulis Research and Development Kitchen (here). 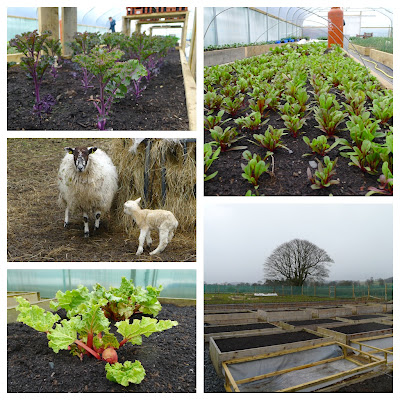 The farm operation, under the guidance of Chefs Dan Cox and Lucia Corbel and with support from Ken Holland, has gone from strength to strength since my last visit. The video on Simon’s website (here) best shows this.

One anecdote told to me by Lucia that speaks volumes is how on the first night that she and Dan transferred saplings from the heated polytunnel to fend for themselves with just few layer of fleece for protection. 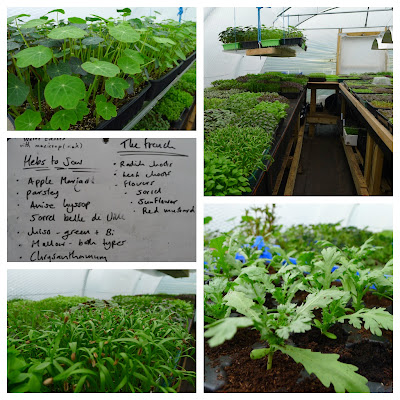 Stopping short of using a baby monitor or sitting up all night with their ‘babies’, with a look a parent might have when sending their child to school for the first time, Dan apparently said, "They will be alright, won't they?" before swaddling them in another layer of protective fleece.

It's this love which transcends from farm to plate in everything that Simon Rogan and his team do that make his food and restaurants so special. 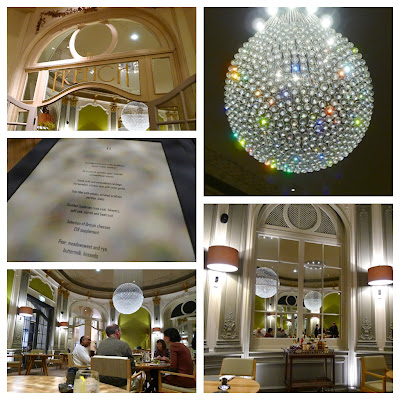 Having already posted about The French by Simon Rogan twice this month (preview here & opening night here), a third time could be considered overkill – but already the food is evolving and service is becoming slicker. 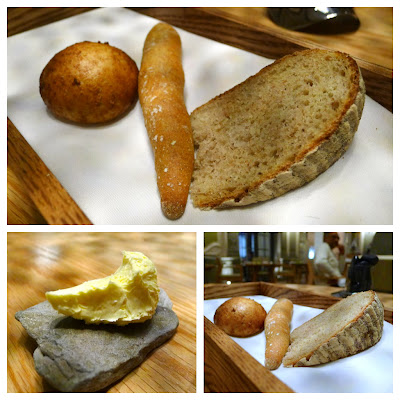 On this visit, I opted for the £55, 6-course lunch (on a Saturday they also offer 3-course for £29 and 10 for and £79 – although I should point out that as a ‘regular’ and knowing that it’s my favourite they kindly also provided the salad). 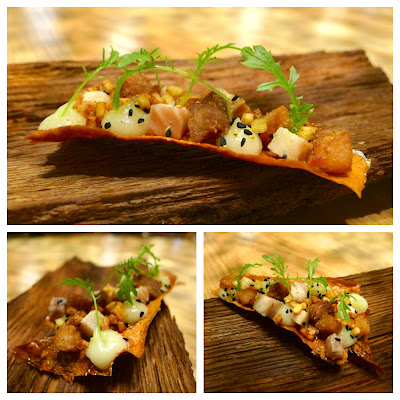 Amuse bouche generally come with each of the menus (these vary). This time I was served a Parsnip Crisp with crispy pork, smoked eel, parsnip purée, onion seeds and, from the farm, the ‘true leaves’ of green mustard. This for me, thanks to the parsnip crisp, is already an improvement on the similar dish served at the two previous visits. 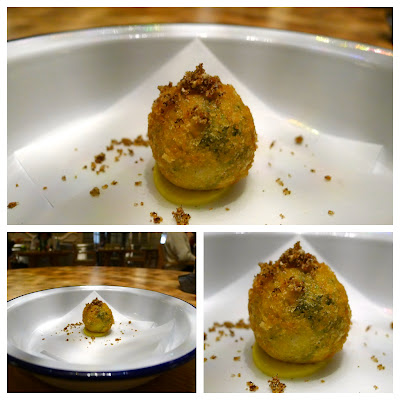 The second amuse, quirkily (perhaps provocatively for fans of the old-school French) served on a hipsterish enamel camping plate came in the form of Dock leaf and nettle ‘croquette’ with buckwheat and a salt ‘n’ vinegar crumb on an English mustard crème. 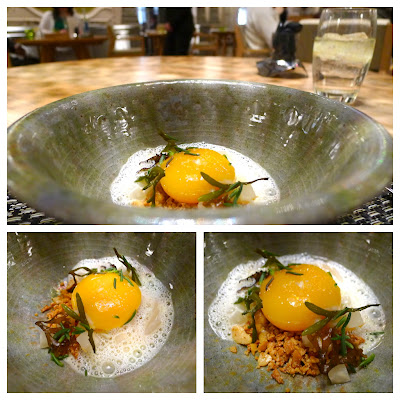 Next, I had Razor clams with egg yolk, celeriac & sea herbs – a reworking of their reworking of the razor role reversal. This may have lacked the whimsical presentation but it scored full marks for me on flavour. The slow poached hen’s egg added a silky richness but it was the addition of sweet, nutty toasted garlic that I think lifted the dish for me. 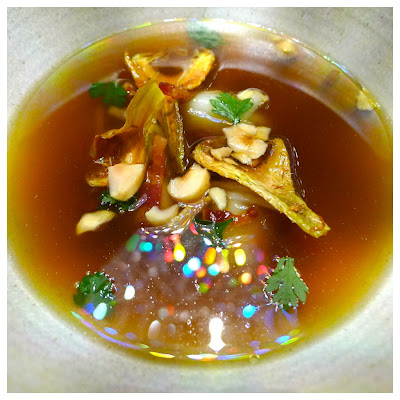 Artichoke broth with truffle dumplings, artichoke crisps, bacon lardons, mooli radish & toasted hazelnut – since the last visit the broth has become a little lighter in colour but not in flavour. What I loved this time was that being sat under the stunningly beautiful globular chandeliers, their reflection shimmered in the broth. 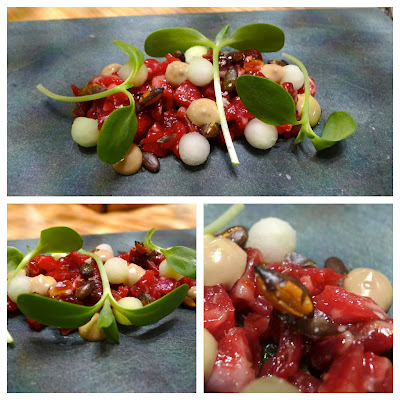 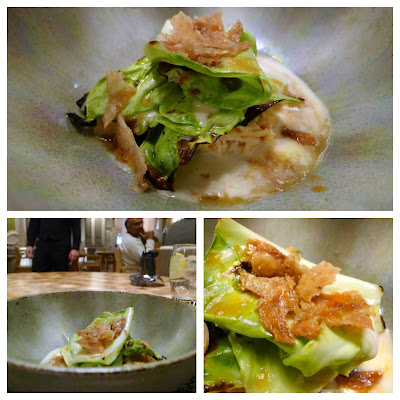 Fresh crab and caramelised cabbage, horseradish, chicken skin with crow garlic. The crab dish was not one I raved over after the previous visit – the taste was faultless but I found it to have an odd mix of temperatures, as it came in a hot dish but the mix of white and brown crab meat was partially cold. On this occasion, it was warm all the way though and as such was much more enjoyable (a good case as why not to ‘review’ in early stages of restaurant openings). 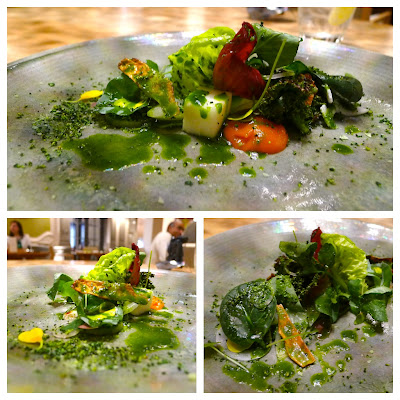 Early spring offerings, vegetables, herbs and flowers with lovage salt. Every time I eat this salad I love it more and more - every mouthful is different – every mouthful is exquisite. On this occasion the subtle chilli dressing seemed more prominent which was a good thing but I still think it’s the lovage salt that makes the dish so special. 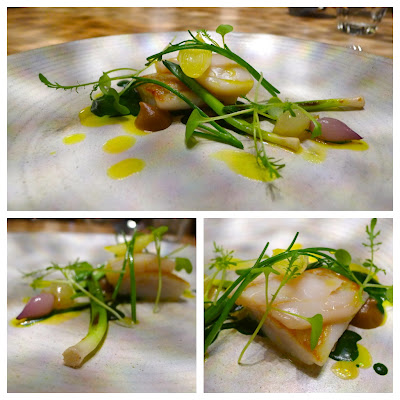 Sole fillet with onions and smoked scallops, parsley and leeks – I overheard the table behind me mention that the fish was ‘undercooked’ for their liking. Personally, I love fish when it retains a slight degree of translucency. This fish, even with the subtle smoke of the scallop tasted so pure and harmonious with the fresh spritely flavour of the young alliums. 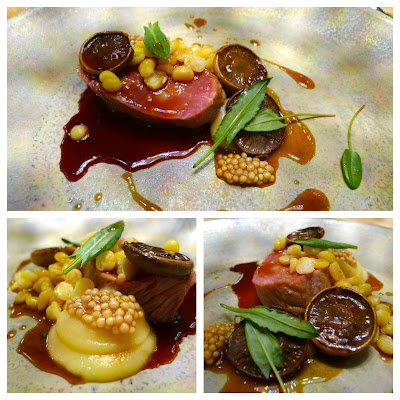 Studded Cumbrian rose veal, blewits, split pea, sorrel and beetroot. The ‘veal dish’ is one that has grown on me with each tasting. Most chefs make the meat the star of the show but with this dish you get the feeling that it's not 'all' about the veal – the split peas carry the biggest textural element to the dish whilst the ‘fermented’ mustard seeds and the beetroot jus add the most interesting layers of flavour. 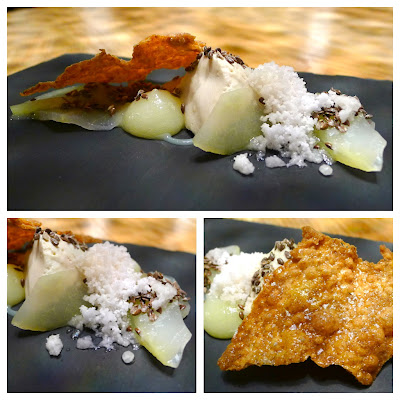 Pear, meadowsweet and rye, buttermilk and linseeds. On my last post I commented that the rye cracker was like a giant cornflake; this time it seemed to have been sweetened so now it was like a giant flake of Frosties. As Tony the Tiger would say, “This dessert tastes gr-r-reat!” 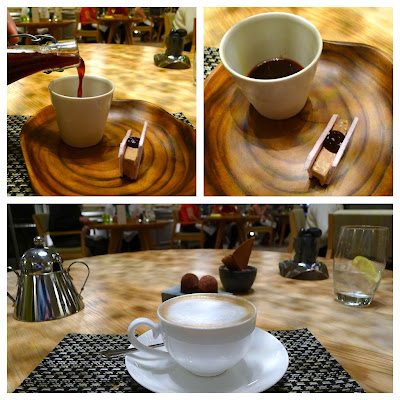 The best lunch that I’ve ever eaten in Manchester ended with Sass ‘n’ Soda which comprised of a shot of sarsaparilla soda with a sarsaparilla meringue with, parfait and gelée sandwich. Plus coffee and petit fours.