In previous posts I’ve always alluded to how (since opening in 2002) L’Enclume has ‘evolved’ over the years. After my recent visit though, and looking back it is clear to me that this is not the case… 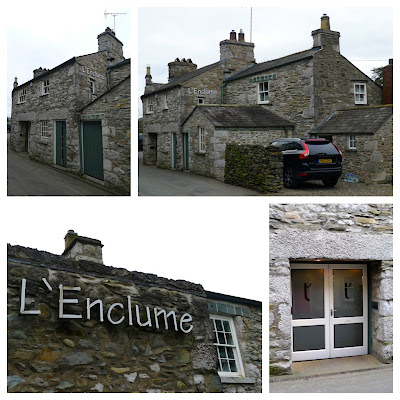 Doing away with any Darwinian allusions that L’Enclume’s evolution has come from any kind of accidental or natural organic selection and opportunity, I am left with the belief that its development has, from the outset, been cleverly ‘engineered’ by the ‘supreme architect’ that is the ‘worshipful’ Simon Rogan.

Don’t fear, I am not about to call for you to join a cult called ‘The Church of Rogan’ or ‘The Branch Roganics’ but it is interesting to read that in a 2003 interview with Ben McCormack from ‘Caterer and Hotelkeeper’ (click here for the full article) that Simon Rogan always had a master plan! 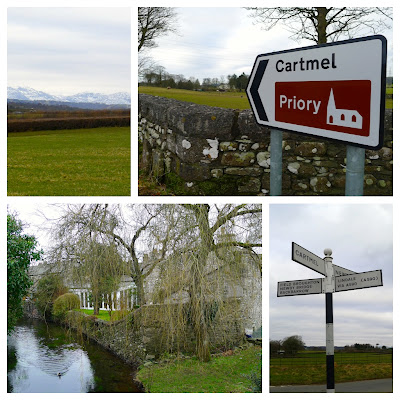 The article talks about how there was ‘incomprehension’ from certain quarters for many of Simon’s initial ideas and concepts. It seems, some early reviews, including one in The Guardian by Victor Lewis Smith (see here) failed, at the time, to appreciate what L’Enclume were achieving. (It would be interesting to see if some of these early reviewers have been back and how many of them would now be prepared to eat their words.)

It is now evident, that Simon’s plans were always much greater and grander than ‘simply’ opening what would become one of the country’s best restaurants. From day one, the intention was ‘to put Cartmel on the national map.’ and, I’m sure for want of a better analogy at the time, to become ‘the Rick Stein of the North'.

What follows are selected quotes from the Ben McCormack article; coupled with my assessment of where things stand today.

‘Come the spring, Rogan launches a 16-course, £90 tasting dinner that he describes as a "blueprint" for what will follow.’ Ten years ago a 16-course tasting menu was a mind-boggling option for many diners; now such menus are the norm in most high end restaurants. 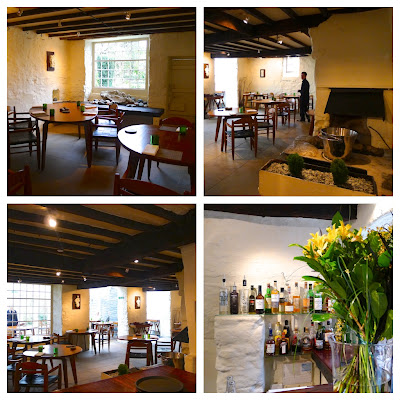 ‘It marks a bold move away from Rogan's current modern French cooking to something altogether more original.’ The L’Enclume menu is now almost entirely sourced from Britain if not Cumbria alone.

‘Seasoning - herbs, in particular - is the focus of the new menu. ~ To this end, he has employed a teacher to research locally growing herbs, which will be specially cultivated for L'Enclume by an organic farmer.’ I’m sure people at the time would have felt Simon arrogant, if he had said that one day he would have five farms with herbs and produce grown dedicatedly for his restaurants but this is the case now. Not only this, L’Enclume now have their own farms as well as a very successful partnership with veg guru Ken Holland.

‘Rogan confesses that his ultimate ambition is to do away with the menu altogether, so that diners will simply trust in what has been put before them.’ It took a while for him to realise this vision but just before they were awarded their second Michelin star late in 2012, it became the case.

‘Rogan can foresee the day when, rather than having only seven guest rooms, a whole house in Cartmel will be given over to accommodation.’ Another understatement… Simon now has eighteen rooms available in Cartmel for guests to L’Enclume; the second restaurant Rogan & Co. and the newly acquired Pig & Whistle public house. 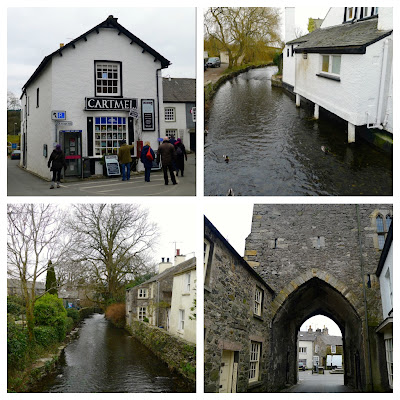 The article makes no mention of these latter acquisitions; but they, along with the opening of Cartmel Coffee, Unsworth’s Yard with Cartmel Cheeses, Cartmel Bakery, Hotwines and the monthly Cartmel Food Market, have indeed made the village a foodie destination akin to Rick Steins Padstow.

Simon’s ‘grand scheme’ it seems, does not end here – devotees of Rogan’s food no longer have to make the pilgrimage to Cartmel: Roganic, the two year ‘pop up’ in London is reputedly looking for permanent premises and the people of Manchester are eagerly awaiting the opening (on the 12th March) of ‘The French by Simon Rogan’ at the city’s iconic Midland Hotel (see here).

When I last dined at L’Enclume (see here) it happened to be on the day before the Michelin Guide ‘leaked’ the news that the restaurant had been upgraded from one star to Two Michelin Stars.

The ‘menu’ at my recent lunch did not seem to have gone through as many transitions as I have become accustomed to expect between my previous trips. 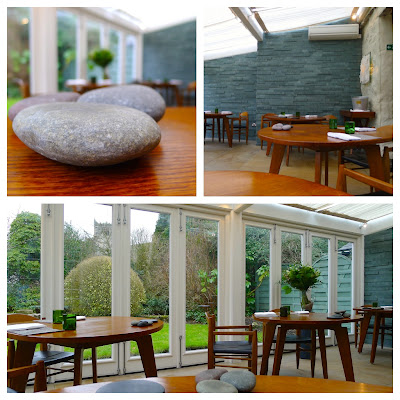 Although many of the dishes were recognisable incarnations of the dishes I ate in October, this does not mean there has not been ‘developments’.

In October, I wrote that it was ‘one of the best meals I have ever eaten.’  That was true… but this one was better! There seemed to be a greater maturity about the food - almost as if it had in some way ‘found itself.’

This I’m sure has much to do with recent developments behind the scenes – most notably: Roux scholar and Cumbrian hill farmer Chef Dan Cox’s work at their farm is coming into its own; sous chef and ‘Forager-in-chef Kevin Tickle is really getting to grips with his own personal allotment (otherwise known as the Cumbrian countryside.) and, another Roux scholar, Head Chef Mark Birchall is cooking with great confidence.

I’m conscious that this post is already getting very long and I’ve not yet written about one of the nineteen courses I enjoyed so I’m not going to go into my usual detail (I may just highlight any ingredients that I found particularly enjoyable or new.) 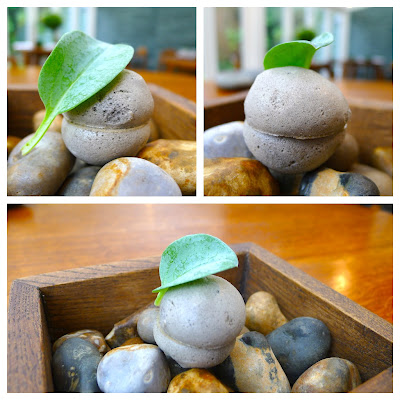 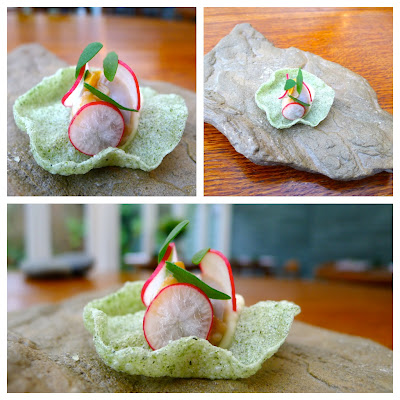 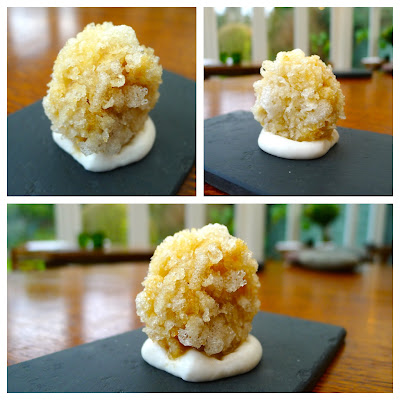 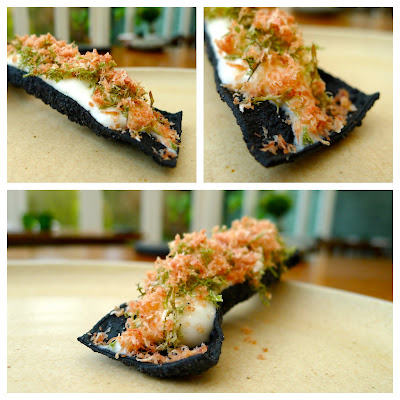 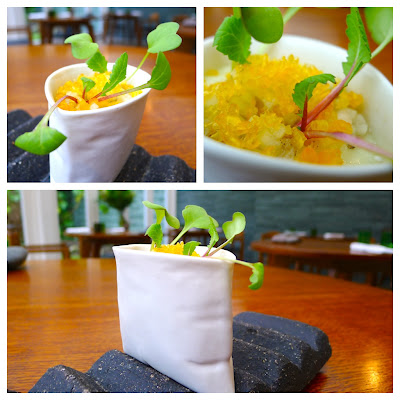 Kohlrabi, eggs, truffle – the ‘home grown’ kohlrabi had been made into a mousse and placed in the bottom of L’Enclume’s familiar porcelain sacks before being topped with raw kohlrabi and egg yolks that had something clever done to them. 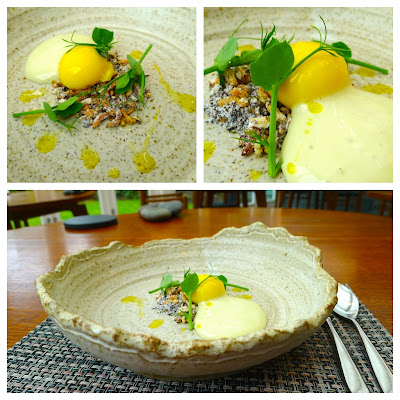 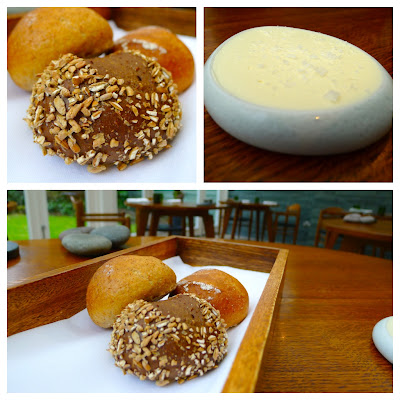 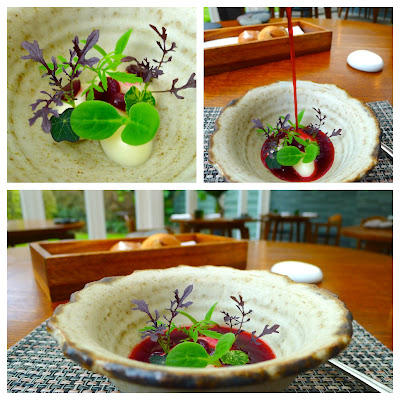 Westcombe dumpling, vegetable broth, beetroot and winter shoots – I love this dish as it really shows off how L’Enclume use herbs and salad leaves to season and add flavour. Against the clear beetroot broth each of the leaves (borage, mustard cress, nasturtium, apple marigold) brought a different flavour profile. 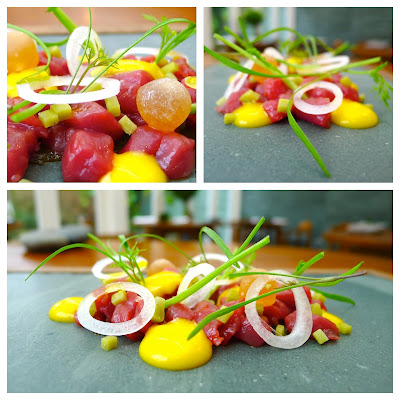 Valley venison, charcoal oil, mustard and fennel – This dish is a true work of art; it looks beautiful and the tartare of venison loin from nearby Holker Estate is always exceptional quality. The caper jam, diced cornichons, shallots, fennel cress and globes provide a perfect synergy of flavours. 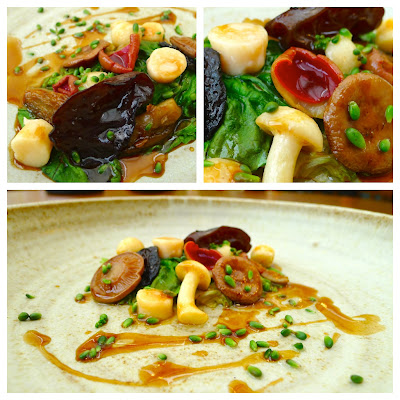 Valley mushrooms, yellow pea and lettuce, smoked marrow and stonecrop – For this dish (one of my favourites of the meal), Mr Tickler had been busy in the hills sourcing the mushrooms: English white cap, Scarlet elf cup, Blewits and Judas Ears. The other interesting ingredient was the use of the slightly sour succulent leaves from a type of sedum known as ‘stonecrops’. 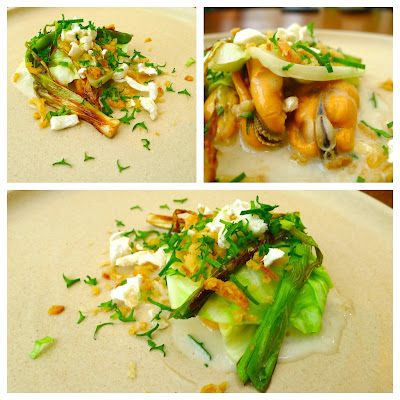 Mussels in their own juice, cabbage and leek – another beautiful subtly flavoured and well balanced dish with ‘triangular garlic’ a ‘new ingredient’ to me that piqued my interest. 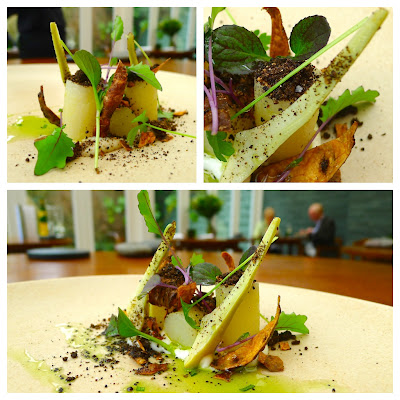 Artichokes with goats cheese, tarragon, malt – this artichoke dish in one form or another has been on the L’Enclume menu for quite some time; crispy artichoke skin is a real favourite. 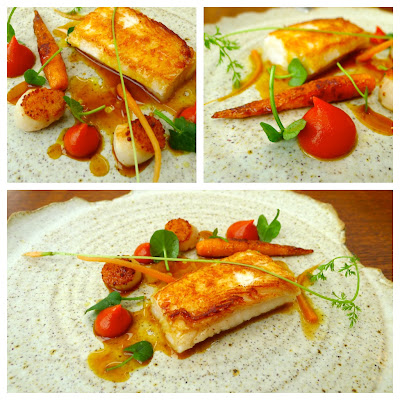 Lemon sole, grilled carrots, Manx queenies and celandine – the sole was obviously cooked to perfection and the celandine leaves were a new ingredient to me; but the aspect of the dish that I feel needs the most attention was the Manx queenie scallops that had been cleverly seasoned with their own roe. 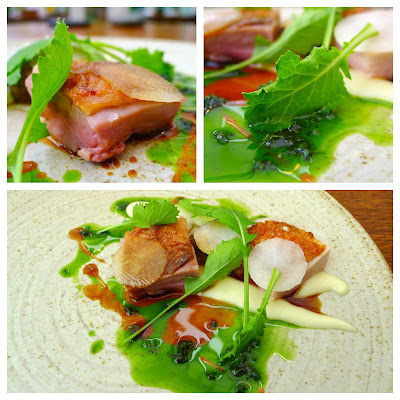 Reg’s Guinea Hen, turnip shoots, potato, offal and scurvy grass – the sunrise element of this dish was the rich ragout that that had been made with the guinea hen’s hearts, livers and kidneys. Wonderful stuff! 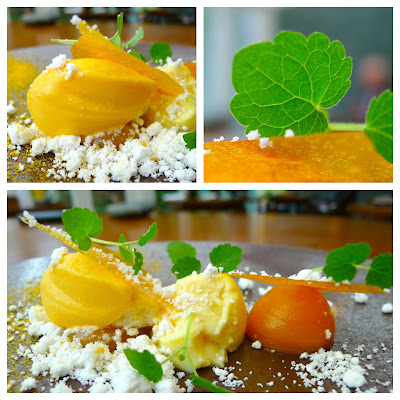 Sea buckthorn, buttermilk, liquorice and butternut – the sea buckthorn sorbet is such a delightful intense flavour it livens up the buttermilk and butternut squash; the powdered anise hyssop and shoots adds a whoosh of freshness. 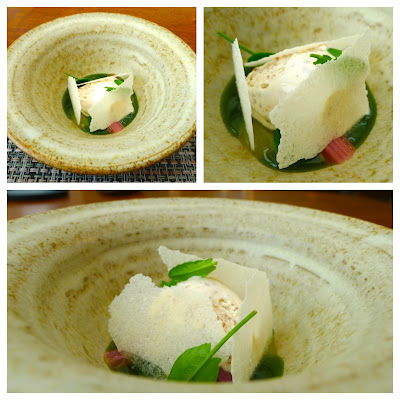 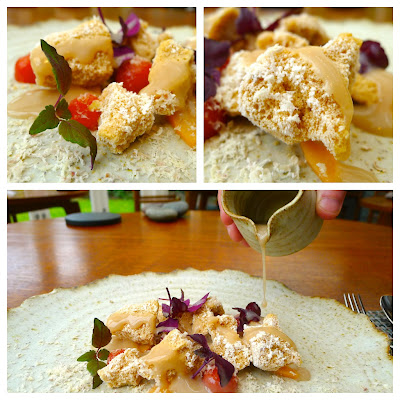 Honeycomb, quince, chestnut and perilla – I love quince and it paired beautifully with the chestnut sauce, shaved chestnut powder and clever take on ‘honeycomb’ made with some LN2  wizardry. 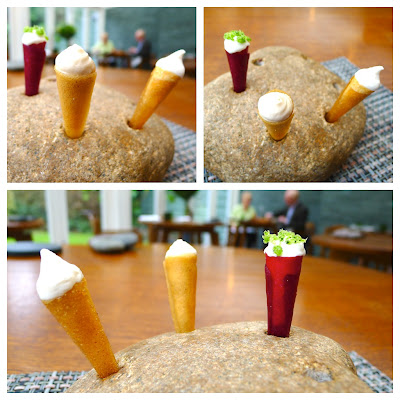 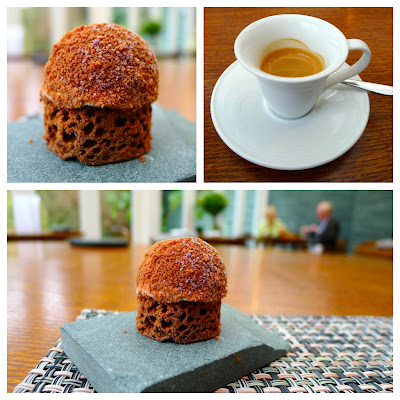 Coffee and petit fours – a ‘Kendal mint cake’ ice cream and aerated chocolate bonbon with a shot of ristretto.