Regular readers will know that I’m not a regular drinker (save for the occasional port and drop of sake); at least not so much when I eat out. There are a few of reasons for this.

Firstly, I like to drive and secondly, I have expensive tastes and am generally reluctant to pay the restaurant mark up on some of the pricier vintages (I’d prefer to spend the money on another meal). Also, I tend to enjoy wine more on its own, rather than with food so I am much more likely to drink when at home.

When eating out, tonic water is typically my drink of choice as my palate appreciates bitterness. (I often find dishes too sweet for my taste and love naturally bitter foods such as endive, olives, coffee and brassicas.)

What’s more, only on rare occasions do I feel that wine pairings genuinely ‘hit the mark’. By this, I mean occasions when I feel that wine in the glass acts like another ingredient on the plate. In my (limited) experience even most ‘good’ wine pairings, ‘at worst’ do not clash with the food and ‘at best’ only compliment on certain levels.

This being the case, you may wonder what I was doing at a Nyetimber Sparkling Wine Evening at Aumbry.

I had met up in the day to act as ‘tour guide’ for Mr. Critical Couple (see here) who was in town to sample Simon Rogan’s new restaurant at The French (here) and when he said he would otherwise be eating alone at Aumbry I jumped at the chance to join him.

Plus, I rarely feel knowledgeable enough to comment on wines so an evening like this could be good educationally. 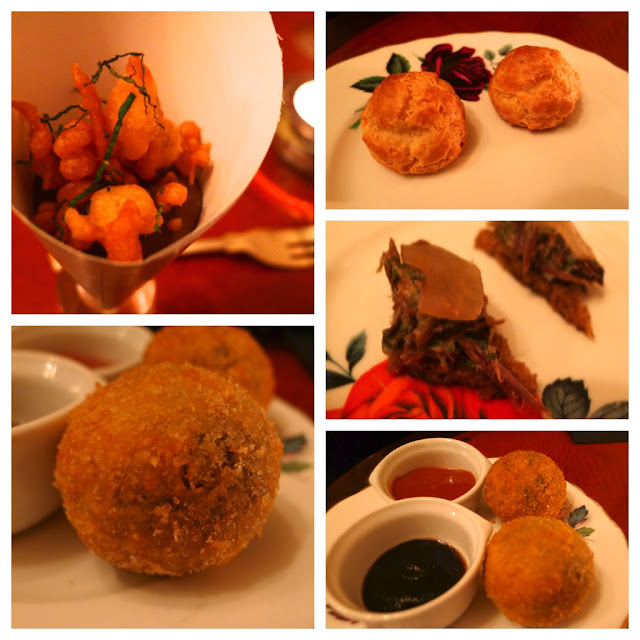 Upon arrival, we were promptly given a glass of Nyetimber Classic Cuvee 2008 and led upstairs before being treated to a selection of canapés, including: Gougères; cones of Black Peas with eucalyptus & ‘scraps’; Braised Venison with pickled junipers and the Aumbry favourites… Bury Black Pudding Scotch (Quail) Eggs, with homemade tomato & mushroom ketchups.

Before long, Michael Bush the evening’s Nyetimber host, gave an introductory welcome speech and told us a little about the vineyard’s history – much of which can be found on the company’s website (here). Throughout the evening, Michael introduced each of the wines as they were served with the four courses that had been designed by Aumbry’s celebrity chef, Mary Ellen McTague. 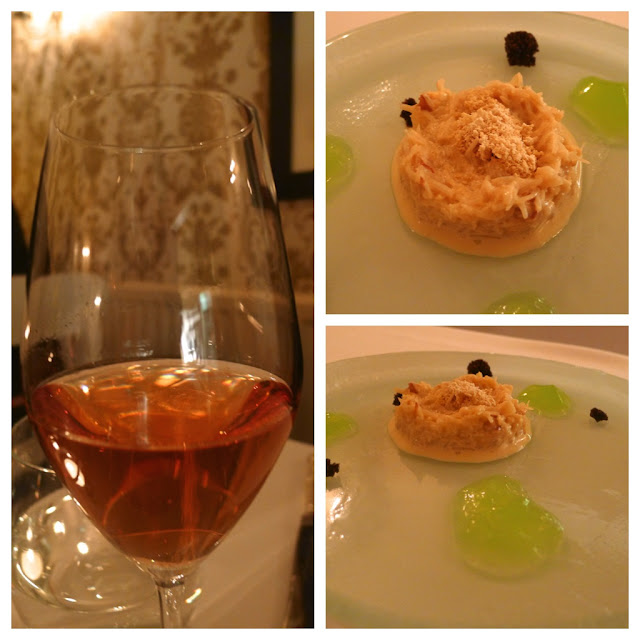 Potted Crab, cucumber jelly & crab bisque pearls paired with Nyetimber’s 2008 Rosé. Everything about this dish and pairing was elegant and summery - from the fresh pure flavours of the crab and cool clean cucumber to the light bubbles and summer fruit flavours of the wine.

Their 2007 Blanc de Blancs had been served with Seared Hand Dived Scallops, Granny Smith apple, smoked bacon & lemon thyme. This was one pairing that I did not enjoy – I thoroughly enjoyed the dish; the lemon thyme, apple and bacon flavours were delightfully bold. 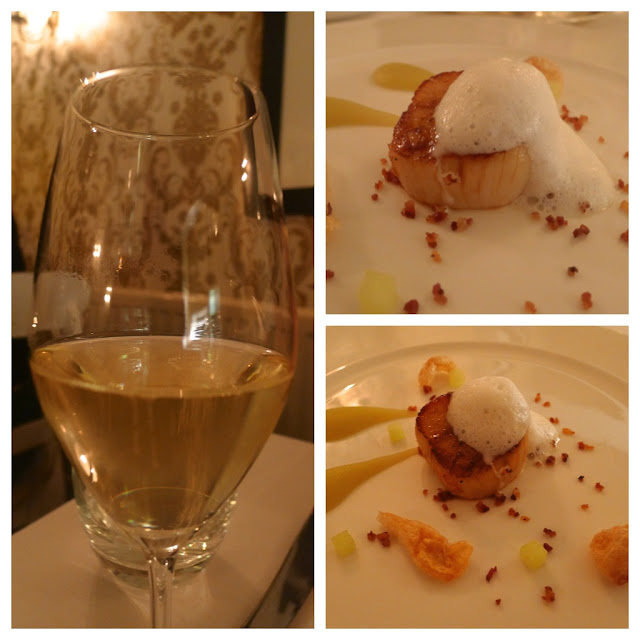 The wine has plenty of citrus notes and an appley nose so, on paper, should have paired well but I found the overall saltiness of the dish coming from the bacon required a wine with far greater effervescence.

The next course, Slow Cooked Wild Rabbit, braised lettuce, carrot seedlings & Engish truffle was paired with my favourite wine of the evening’s offerings, the 1996 Blanc de Blancs – again, despite enjoying both the dish and the wine, the pairing did not necessarily work for me. 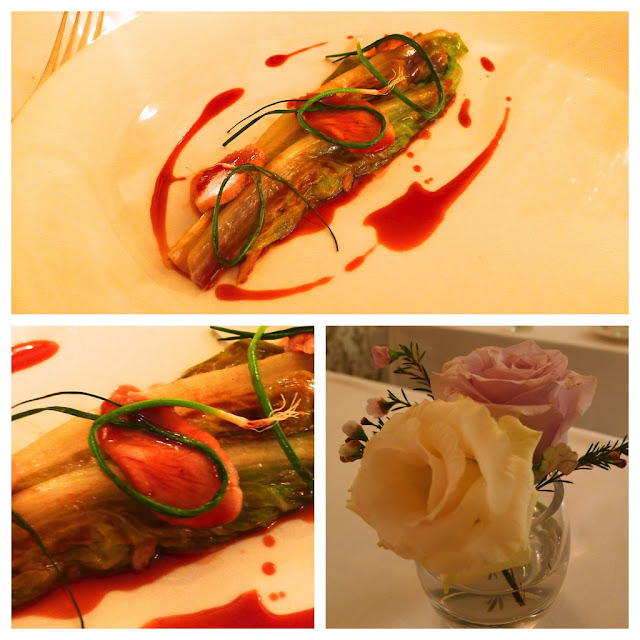 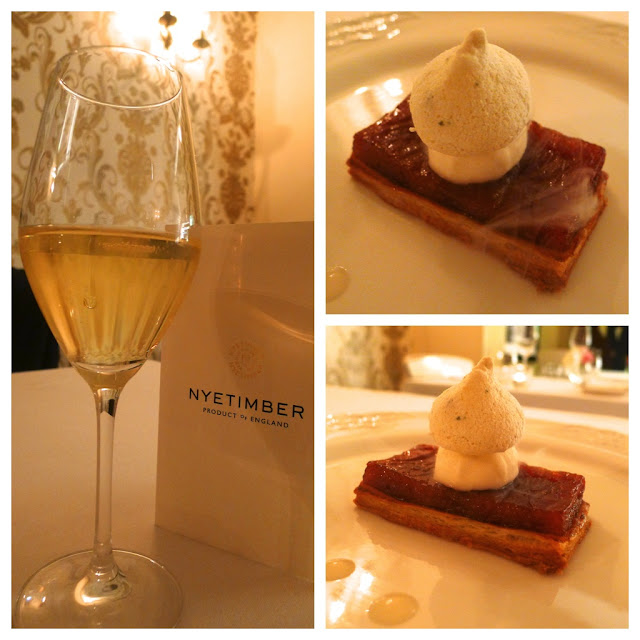 On it’s own the wine didn’t really do anything for me but as a pairing it was indeed akin to another ingredient on the plate. Reminding me of a simplified version of The Fat Duck’s Taffety Tart, I found the balance of flavours simple enough to take the enhancing ‘additional’ flavour of the wine. The lemony notes and honey aromas backed up by citric acidity formed a great synergy with the apples and local Heaton Park honey in the dish.

All in all I had a great evening – talking food and restaurants all night with Mr. CC was, of course, right up my street; the Nyetimber wines were great and I learnt a lot… and it was fab to taste some of Mary-Ellen’s latest* dishes.

(*I know that after hearing so many positive reports and having seen Mary-Ellen on Great British Menu and knowing her Fat Duck background, Mr CC was perhaps expecting more creativity or ‘risks’ in Aumbry’s cooking. Whilst, I am a firm believer in the old adage ‘If it ain’t broke, don’t fix it’, as much as I love Aumbry, I have to admit that the menu does not always change with as much regularity as I would sometimes appreciate. With the opening of The French by Simon Rogan and Aiden Byrne’s Manchester House on its way, I hope Mary-Ellen brings some of the competitive nature that we saw in GBM and rises to the challenge to keep Aumbry up there as one of the city’s best restaurants.)