Most recent blog posts and reviews of Chef Ernst van Zyl’s food at Etrop Grange have been overwhelmingly positive (particularly those from bloggers who have been on ‘bespoke’ tasting events with prior notice and full knowledge of the chef) - with perhaps one notable exception from Manchester Confidential Gordo (see here - more on that later.)

With so many good reviews from bloggers I respect, I have been looking forward to visiting The Wine Glass Restaurant for quite some time. For one reason or another, including Chef van Zyl’s recent month long stage at Frantzén / Lindeberg, I have been unable to pin down a suitable date. 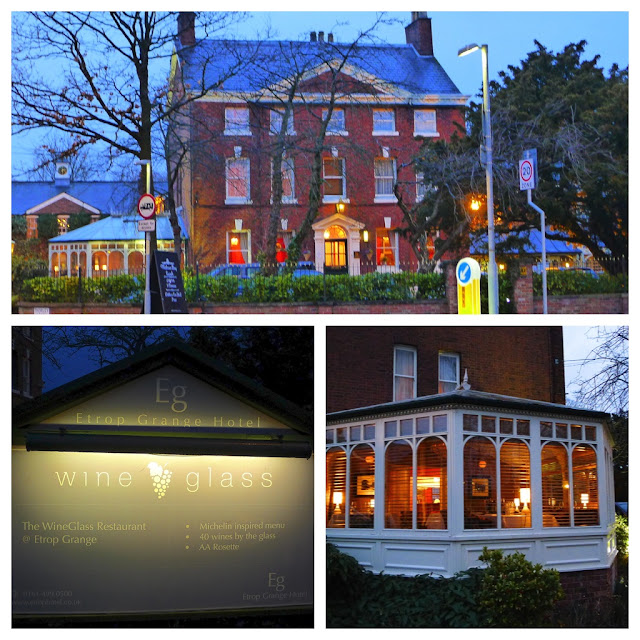 Eventually, I decided to save the treat for my wife’s birthday at the end of March. Knowing that Ernst would most likely be constructing a bespoke menu when we visited, on a whim, I decided to leave my dieting wife at home and popped down to check out the standard Tasting Menu.

From the moment I arrived at the impressive Grade II listed Georgian Mansion, it was a bit of a ‘comedy of errors’. The waiter (I didn't catch his name but it could well have been Manuel) bypassed the comfy lounge area and roaring fireplace and left me balanced precariously on an uncomfortable chair in a corridor. 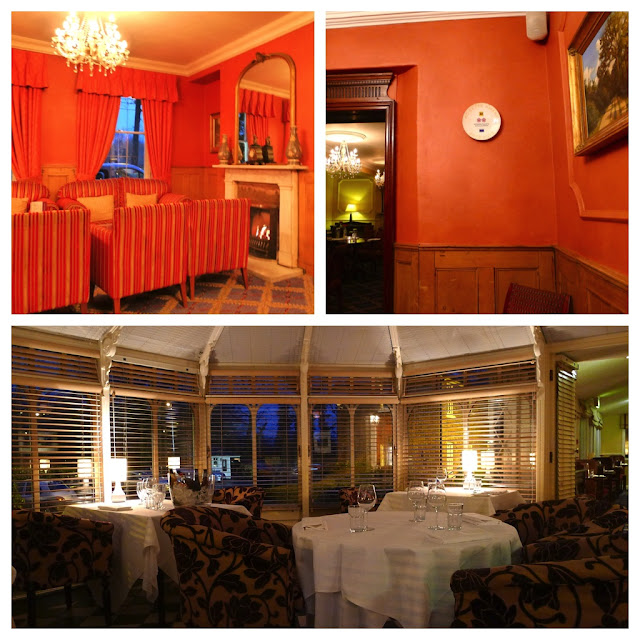 After some time, menus were brought and my drink order taken. Eventually, the waiter led me into The Conservatory and offered me a table in the corner facing grey bricks and a blind. Not wanting to sit facing the wall like a naughty schoolboy I asked to be seated elsewhere. This, it seemed, was not possible so the table was readjusted so that I now had a view out of the door towards my earlier corridor seat.

Nobody offered to take my coat so I draped it over the other seat but I was asked if I wanted an additional drink four times by four different people; so I would not say the staff were inattentive. In fact, a lad called Matt proved to be very good indeed.

The first food to arrive came was, Homemade crackers with smoked butter. The 'crackers' were most definitely without ‘crack’ and as such reminded me of stale pitta bread - they had quite a chew on them and gave my jaw a good workout. The butter was awful. From a service point of view, I was not provided with a butter knife or side plate. 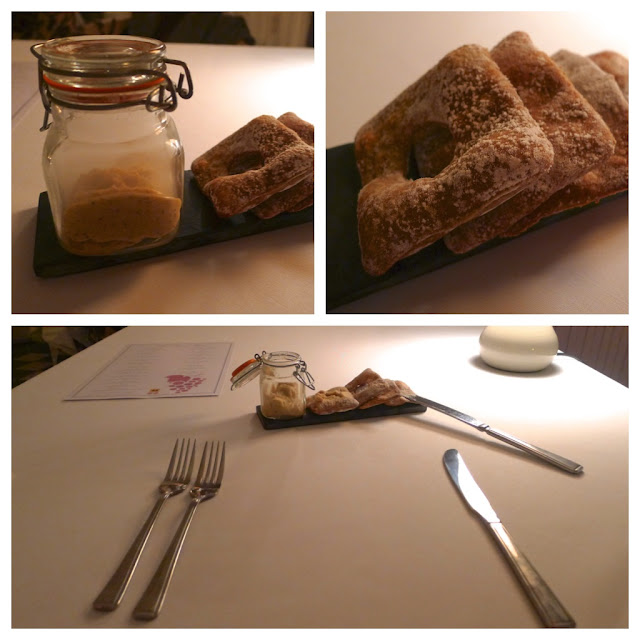 The ladies on the table next to me were actually laughing out loud at theirs, I overheard one say, “It's a big like margarine but you know it isn't... It's got the texture of margarine. We'll be calling in at McDonalds.”

In true British style, when asked if everything was ok, they said, "Yes thank you." 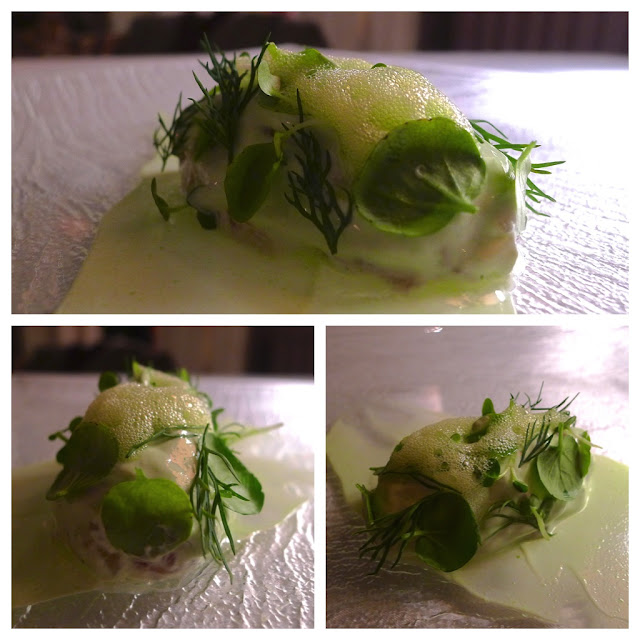 Sea Bass – Cured Fillet: pigs cheek / granny smith / watercress
I had previously seen the chef tweet a picture of this dish on Twitter and thought it looked beautiful. When it came to eating, it didn’t have the same impact – the creaminess took over and the cured sea bass was not allowed to shine. It may have helped to lift the dish if the Granny Smith element had been a little sharper.

Beetroot – 10 Textures: grains / chicken liver / sour cream
The sour cream sorbet was good, as were the larger pieces of beetroot and I quite liked the pearl barley - the rest of dish just appeared to be a giddying array of random textures and flavours that, to me, either served no real purpose or were completely awry. 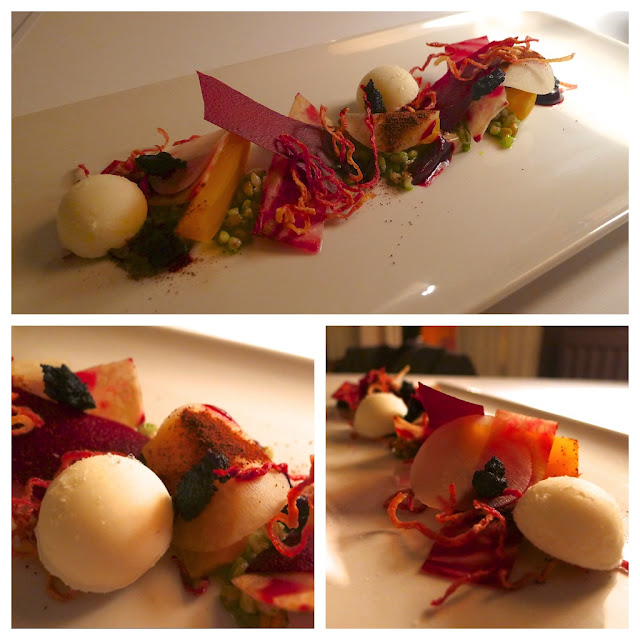 Tasting like edible sugar paper that you get from the sweet shop, the tuile was far too sweet and sugary for my taste; the powdery texture of the 'chicken liver' added little in the way of flavour, whilst the wiggly bits just seemed old and dry.

Mackerel – Hay Smoked: rhubarb / parsley / ox cheek
I love mackerel and I love rhubarb (they are often paired beautifully at Aumbry) so, on paper, this is the dish I had looked forward to the most – it was not actually a part of the tasting menu but was one of two that I supplemented from the a la carte. 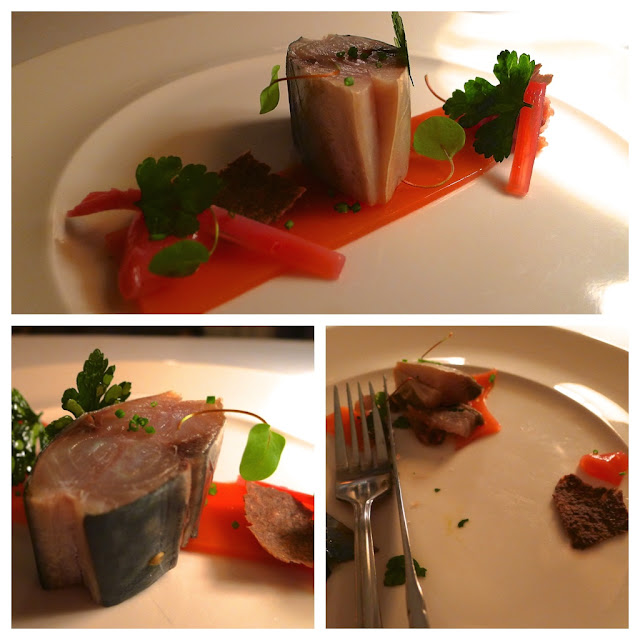 I generally love sashimi, tartares and cured and smoked fish and meats but this, for me, was just raw, fibrous and served far too cold to really appreciate its taste – the hay smoke didn’t come through due to the sharpness of the rhubarb.

My instinct was to stop eating it but I was almost compelled to try and work it out. I thought to myself, 'this must be the challenging the diner' that Gordo referred to. Clearly, I failed the challenge.

The ox cheek ‘crisp’ was another stale tasting anathema - I should be able to describe it better but I'm afraid that I have no real frame of reference… the only thing I can think of that gets close is to say it tasted like a scab.

Venison – Tartare: smoked cheese / dried scallop / chard
The venison tartare looked a bit off colour and unappetising – I managed to eat it but I cant say I enjoyed it as it lacked the clarity and purity that I have enjoyed in similar dishes recently. The smoked cheese, dried scallop and chard components were not the problem. 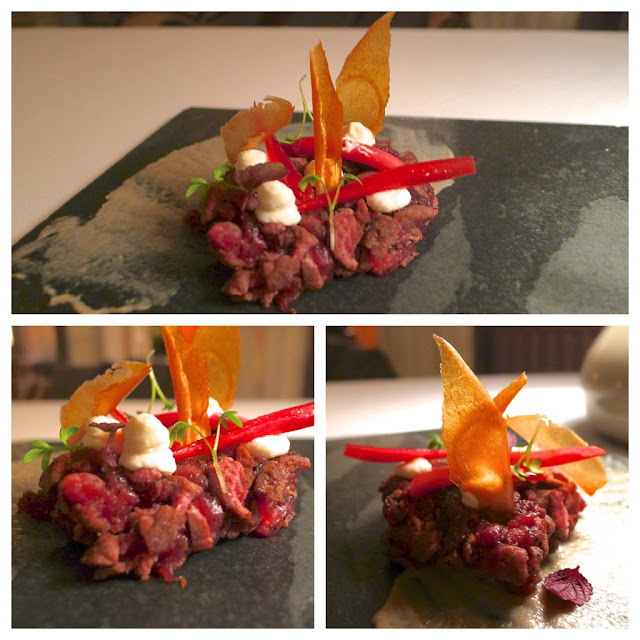 Monkfish – BBQ: aylesbury snails / carrot / almost burnt cream
At this point, it may fair to point out that Chef van Zyl was not actually present in the kitchen. Firstly, this should not matter and secondly, the majority of my grievances with the food are conceptual rather than related to the standard of cookery on the night.

On the whole, I enjoyed the crunch of the thin slices of carrot although they were perhaps a tad dry. However, I found the roundels of carrot overly sweet and overcooked to the point that they tasted like tinned ones that I remember from school dinners. 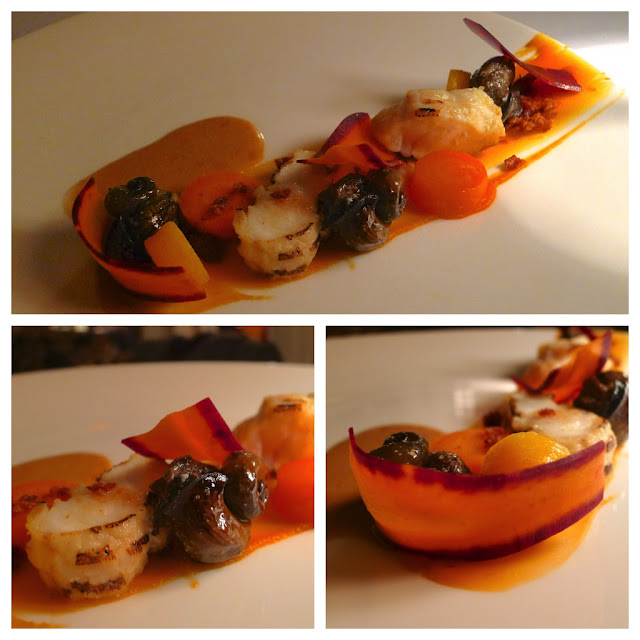 The monkfish too was woefully overcooked, for my taste and I don't want to even think about the diarrhoea coloured sauce that was described as 'almost burnt sauce'. Another failed challenge on my part. Oh, the snails were decent - plump and tender!

At this point I tweeted that I was, ‘1/2 way through the worst meal I've had in a very long time... a tasting menu; thinking about paying up & leaving before I'm subjected to more.’

It seems as through somehow ‘the house’ knew I was in. Which I was surprised to discover, as I had made no previous tweets or mentioned that I’d be eating there… it became a little bit ‘awks’ to say the least. There was also a massive delay before my next course arrived. My tweet may have been a little premature as things did start to look up with the final dishes.

Duck – Pan Roasted Breast: broccoli / gambas rosso / pistachio
I am generally a little suspicious of ‘surf and turf’ dishes but the duck dish was actually half decent – certainly, in my opinion, meriting the two AA rosettes that hang on the wall. The broccoli puree had the correct amount of sweetness for the duck and the pistachio powder added appropriate seasoning. 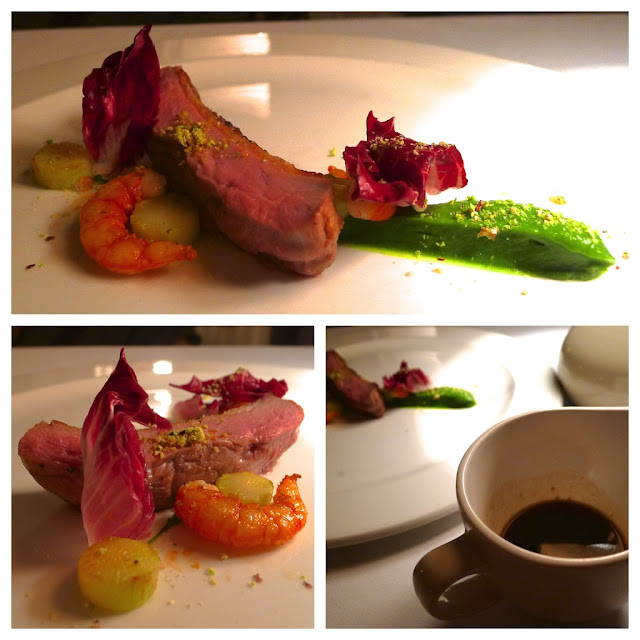 Lemon – Curd: meringue / wild rice / almond
This was the other dish that I supplemented form the a la carte and I’m so glad I did because it was delicious. The lemon curd had good sharpness balanced with sweetness of the soft French meringue – the puffed wild rice and almond sablé adding welcome texture contrasts. 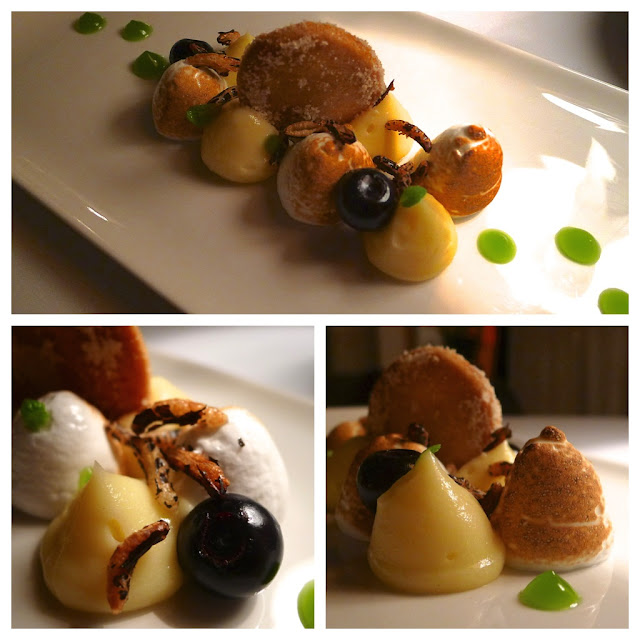 Pine – Parfait: lemongrass / goats cheese / mint
The final dessert read as though it was going to be another 'challenge' to cohese the strong flavours of pine and goat's cheese with the lemon grass, mint and pain d’épices ‘soil’ but the flavours were pleasingly very subtly balanced. 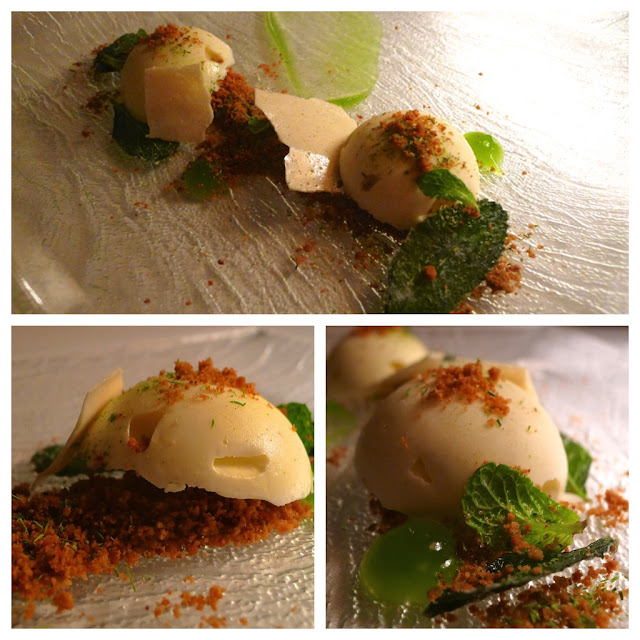 Coffee & Petit Fours
The petit fours were one of the most controversial aspects of Gordo’s post; discussion arising from ‘broccoli jelly’ that he described as smelling of ‘fart’ took up much of the review. Luckily, my petit fours were much sweeter smelling but putting their aroma and flavour combinations aside for a moment (Peach & Lavender and Guinness & Black) it was the texture that I found particularly unappealing. 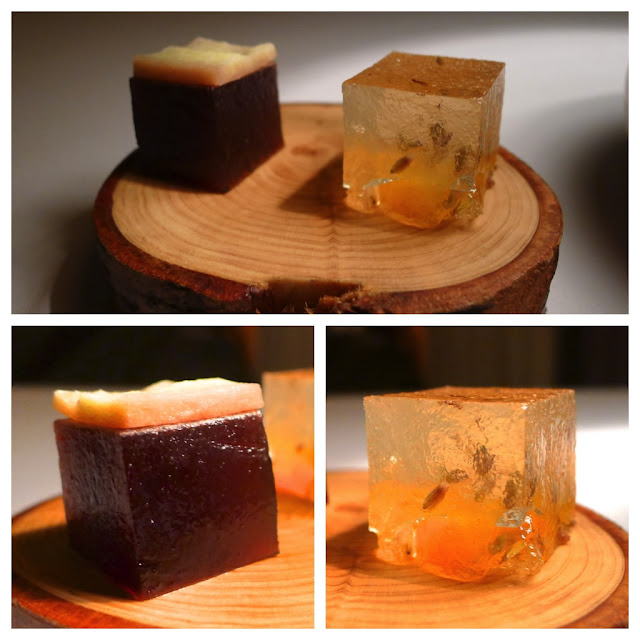 I have had similar outcomes when I have used agar-agar to make jellies. Jellies can suffer from all sorts of textural issues due to gelling agent levels, cooking temperatures and even the rate at which they are set. This, along with sugar and starch levels in the ‘flavourings’ can also make the jellies suffer from poor shine, sweating, stickiness and graining. Science aside, before I turn into Brian Cox, let’s just say, I’d have been much happier with a plain old dusted chocolate truffle.

My experience of food at The Wine Glass reaffirms to me that no matter how good, creative and colourful the food looks on the plate, and no matter what tricks the chef may have up their sleeve in terms of modern and progressive techniques, what is most important is finding harmony, balance and synergy between flavours and textures. For me, this didn’t happen – I can only apologise.

It seems as though, partly due to my comments that Ernst van Zyl has left Twitter. Comments of support show that he has many admirers who appreciate his creativity, so it’s a huge shame if this is the case due to the comments of one blogger. Appreciation of food is a subjective thing and it’s obvious that Ernst pleases the vast majority of people he feeds.