“Le Jules Vernes’ sole ambition is to be itself: the most beautiful place in Paris to savour the pleasure of modern and accessible French cuisine.”
Alain Ducasse

Having grown up in and around London, I know only too well about trashy tourist tat. I've always been bemused as to why someone would want to buy such obviously naff trinkets to remember their trip. The worst offenders being poor quality teas in red K2 phone box shaped tins, small Big Bens or bears dressed as Bobbies. 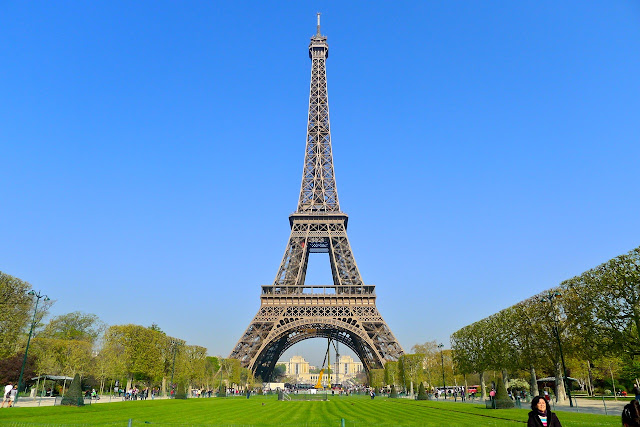 As a British traveller there is little more embarrassing than seeing a bunch of orange holidaymakers stepping off a plane from Malaga wearing oversized gaudy coloured sombreros, clicking castanets and clutching straw donkeys. More preferable souvenirs would be to seek out an authentic paella pan from one of the local markets or a glazed olive dish. 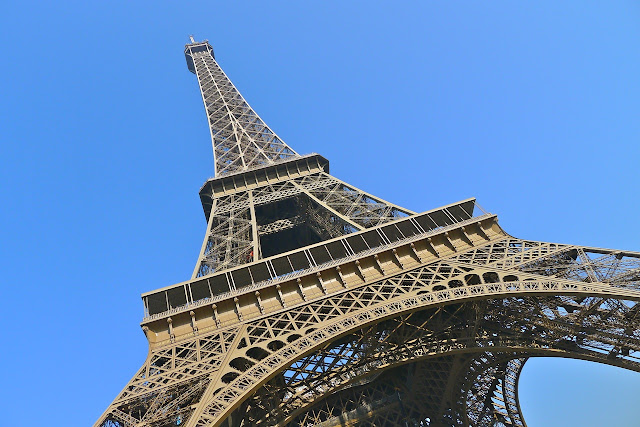 When I visited New York, I managed to avoid the allure of the I ‘Heart’ New York t-shirts and the useless skyline snow globes or worse, a foam Statue of Liberty crown. Instead, I came home with a menu from the Central Station Oyster Bar (now framed in my kitchen) and my Momofuku cookbook. 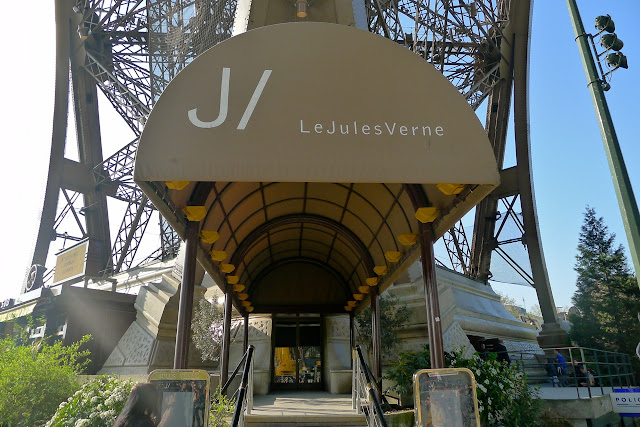 Why then, as someone who goes to such great lengths to avoid crass and corny clichés, would I book a table at the Le Jules Verne restaurant in the Eiffel Tower? There are two main reasons why: 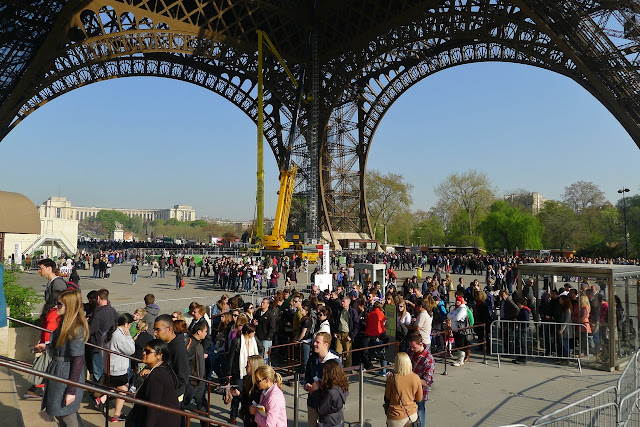 The first has to be the views. When in NYC I learned the value of a good view, one of the few paid touristy things to do that I'd recommend others would be to visit 'The Top of the Rock' at the Rockefeller Centre. Since it was built for the great exhibition in 1889, the Tour Eifel has remained one of the most recognisable and iconic images of almost any city in the world. Impressively, it kept its status the tallest man-made structure in the world for 41 years until 1930 when the Chrysler Building in New York was built. 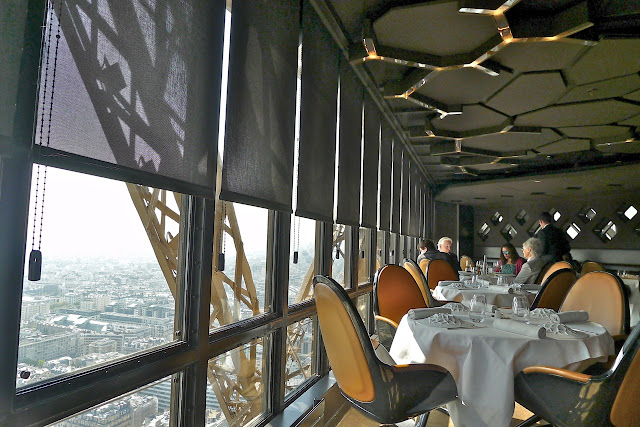 The main reason however was to once again experience the Michelin starred cuisine of Alain Ducasse. The Monégasque chef is one of the most highly respected chefs in the world – he remains the only chef to have had two different restaurants in the top 5 of the S.Pellegrino World’s 50 Best Restaurants list, Le Louis XV (no. 3 in 2003) and Spoon Dex Iles (no.5 in 2002) and has two restaurants listed in Les Grandes Tables du Monde. 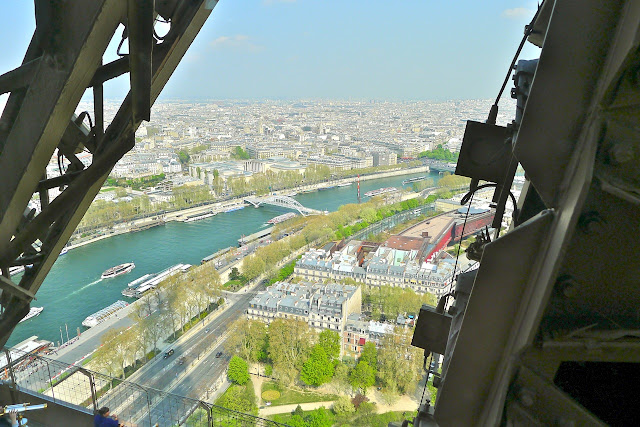 With a galaxy of stars to his name, Ducasse was the first chef ever to simultaneously hold three Michelin stars at three different restaurants in Paris, Monaco and New York – his three-starred restaurants now include: Le Louis XV in Monte Carlo, Alain Ducasse au Plaza Athénée in Paris and Alain Ducasse at The Dorchester in London (see here). 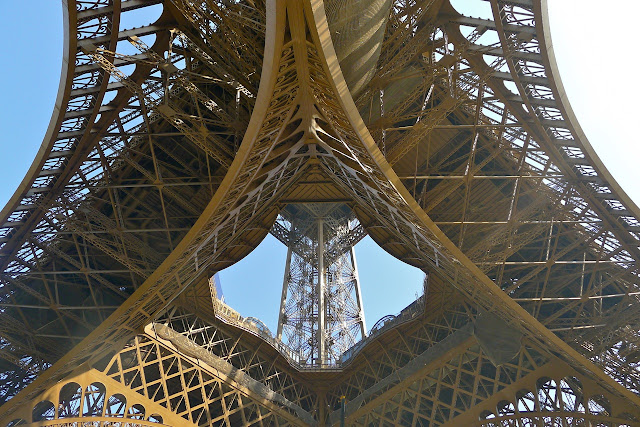 At 125m above ground level with spectacular views of the city, Le Jules Verne is just one of Alain Ducasse’s Paris eateries with an interesting history (others including the 100 year old Benoit; that I’ll post about later and Aux Lyonnais, which dates back to 1890). I always knew there was a restaurant inside the Eiffel Tower but had dismissed it as a touristy trap where food was an afterthought – now I’ve been, I would happily recommend a visit to any serious foodie visiting Paris. 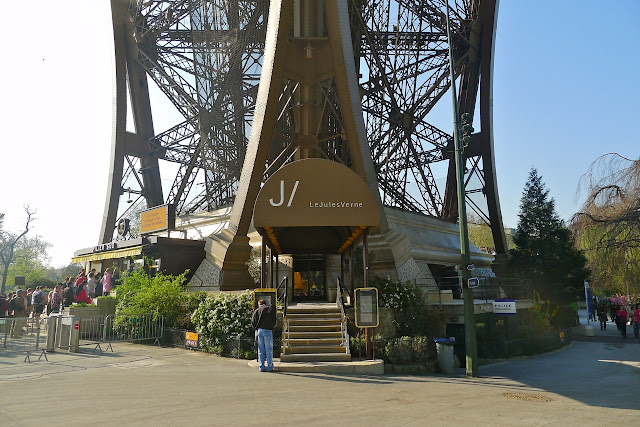 Pre-Ducasse, the restaurant once had two stars but lost them and eventually closed and remained empty until 2007; when Ducasse took over. With a young Pascal Féraud, (formerly of Louis XV and London’s Spoon) at the stoves however the undeniably impressive venue was restored to its former glory and soon regained a star. 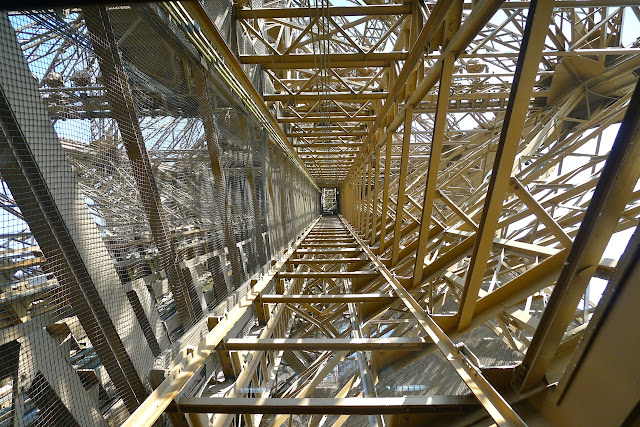 Fittingly named in honour of the French author Jules Verne, famous for his “Les Voyages Extraordinaires” series (including Journey to the Center of the Earth, Twenty Thousand Leagues Under the Sea and Around the World in Eighty Days) a visit to Le Jules Verne does indeed start with an extraordinary voyage - we arrived to find the masses facing queues of up to two hours for the lifts up the tower. Fortunately the restaurant has its own VIP lift located in the south leg of the tower. 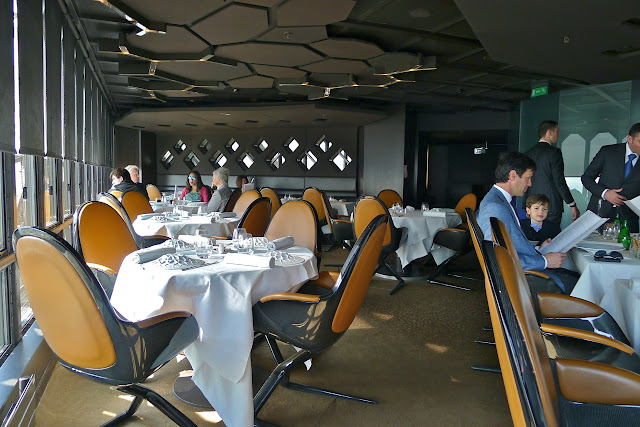 The restaurant has been used as a set in several films including the James Bond film ‘A View to a Kill’ (where a poisonous-barb-carrying butterfly kills ‘Aubergine’). There is still something Bond ‘villainesque’ about the Patrick Jouin designed décor and overall set up (especially with the sliding toilet doors). The wonderful Le Jules Verne website (see here) claims that every detail is designed so that: "A moment spent at the Jules Verne will remain forever engraved the mind of the person who lived it." – this is something with which I can concur 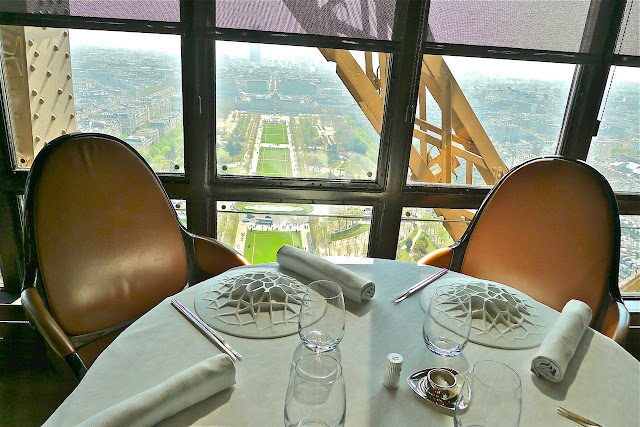 As well as the expected phenomenal views across the city (we were also blessed with a gloriously sunny April in Paris day), striking aspects included the way the design of the 7,300 tonnes of wrought iron lattice work have been echoed in the restaurant design and on the ‘Structure’ serving plates, designed by Pierre Tachon and crafted by the premier Limoges porcelain maker, J L Coquet. 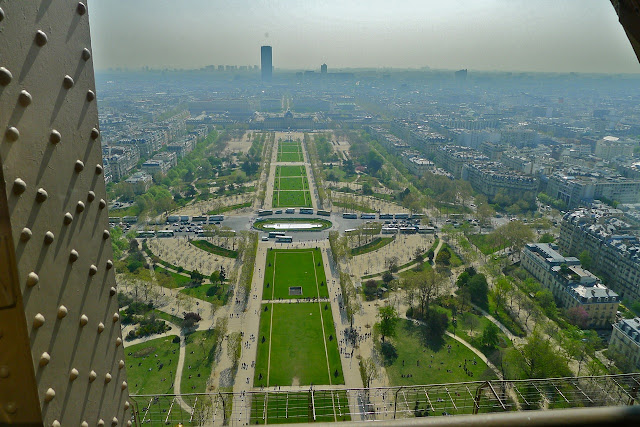 When booking I had ‘requested’ a window table and was very happy with our panoramic view of the Champ de Mars (the restaurant actually has three main dining rooms – one offers spectacular vistas of the Seine). It’s also impressive to overlook the red-wheeled mechanism that controls the elevators. 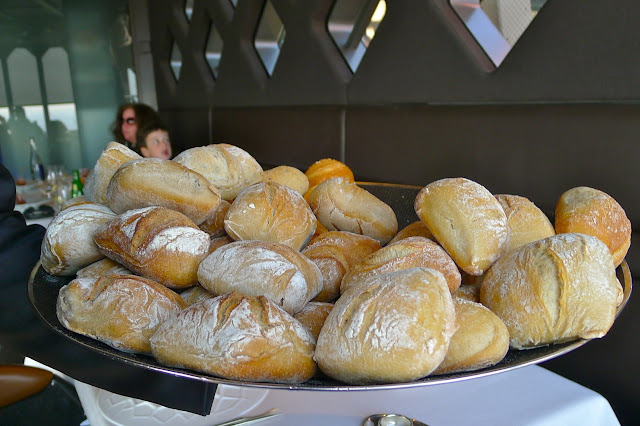 The service, by everyone on the team, from the man ticking names off the list at the foot of the tower as we arrived, to the sommelier, to the food waiters throughout the meal was exemplary. We were quickly presented with Gruyère Breadsticks and a selection of Fresh Breads and Salted Brittany Butter, pleasingly moulded into a tower inspired block featuring the JV logo. 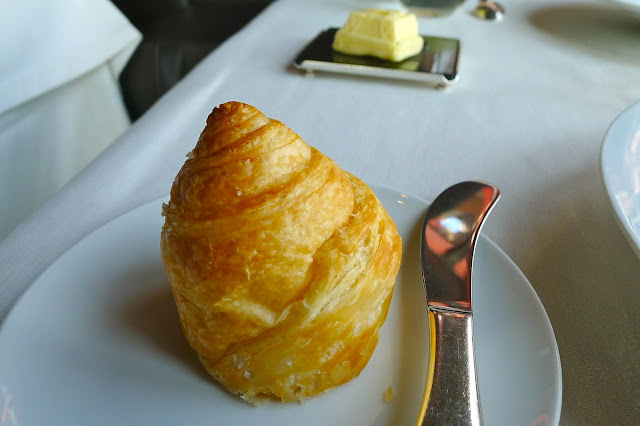 The star ‘bread’ was a delightfully crumbly and buttery pastry (reminiscent of a croissant), studded with salt crystals – wonderful. 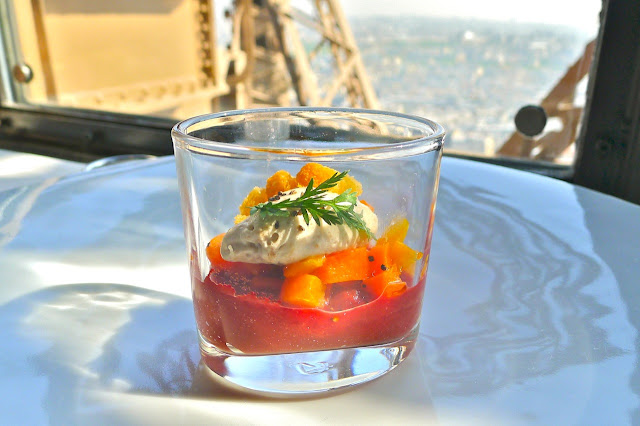 Following the bread, the Amuse Bouche consisted of a Smoked Eel Mousse with carrot gelée and a flavoursome beetroot cream – an enjoyable dish. 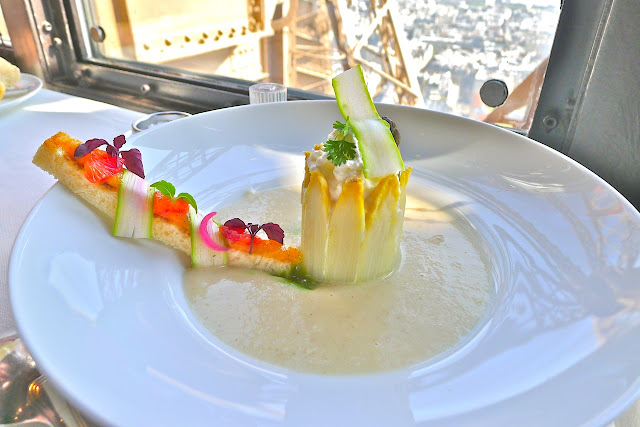 From the set lunch, to start I ordered ASPERGES BLANCHES en fin velouté, crème mi-montée – a beautiful dish, dramatically presented in a crown that had a creamy asparagus mousse piped into its centre. The delicate soup, poured on at the table, was textbook quality. A brioche style bread with blood orange segments pleasingly provided further flavour and textural dimensions. 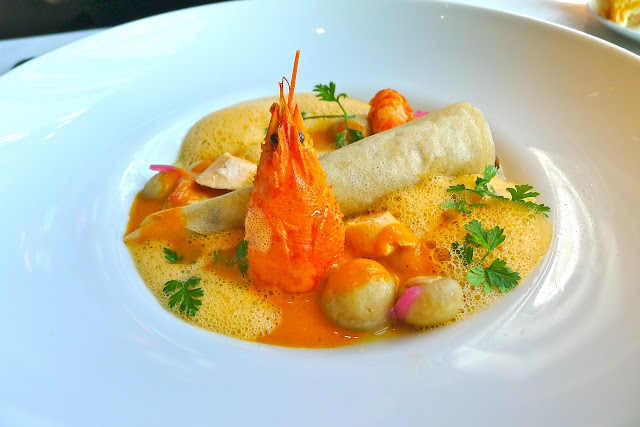 On the strength of my recent enjoyment of the veal breast that I had at Aiden Byrne’s The Church Green (see here) for my main I ordered, POITRINE (breast) DE VEAU cuite comme une blanquette, légumes de saison en beau morceaux, vrai jus. ‘Blanquette’ or, more specifically, ‘blanquette de veau’ usually refers to a stew of veal served in a white sauce; as such I was expecting something much more rustic and was therefore very happy with this more refined version. 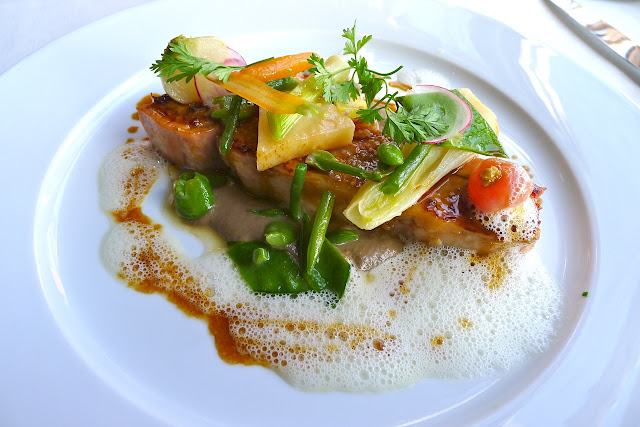 It was interesting to compare the flavour of this milky white veal with the welfare friendly British Rosé Veal that I had at The Church Green. The veal at Jules Verne was very heavily seasoned, which personally I do not mind but I imagine many would consider it ‘too salty’. The accompanying veg featuring tastes of mangetout, French bean, broad bean, carrot, radish and spring onion were all delightfully prepared and cooked. 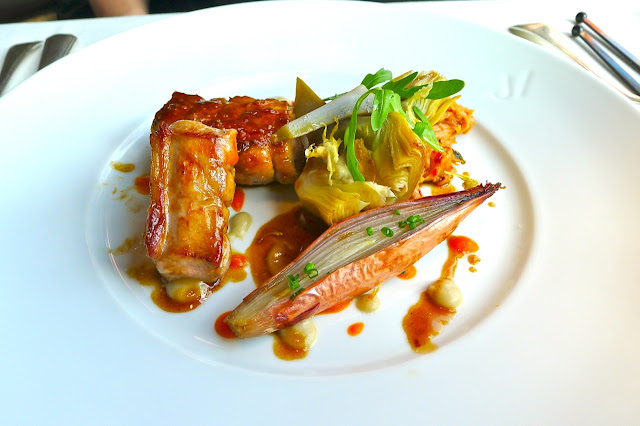 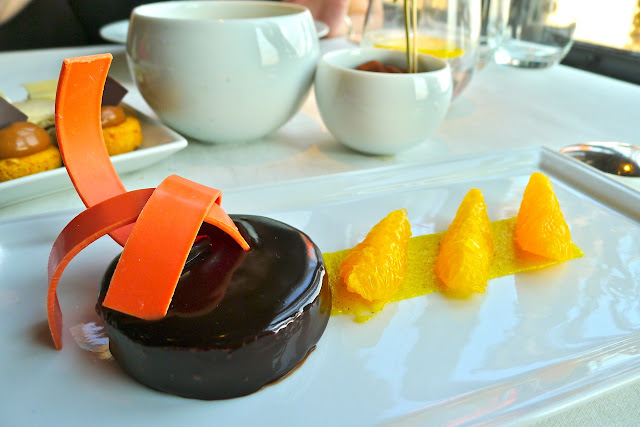 To finish we were provided with some wonderful Petit Fours: Cocoa Dusted Truffles, Mango Sorbet and petit Passion Fruit Marshmallows. 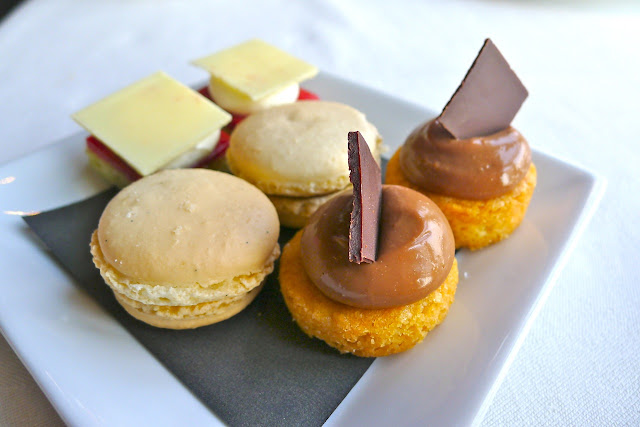 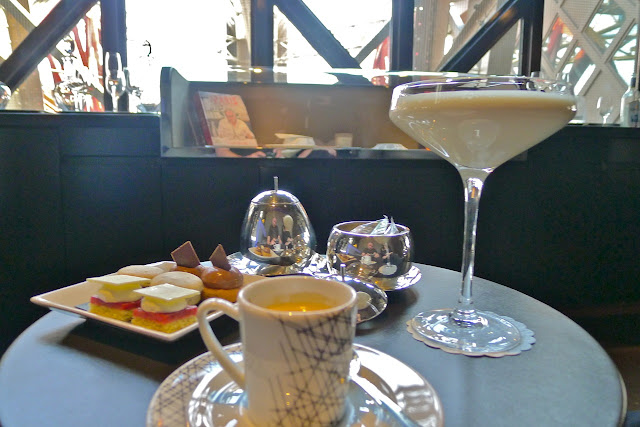 We asked to end our extraordinary voyage at the small bar area overlooking the lift mechanism and the people below on the public viewing platform from which you can take the lift all the way to the top of the tower. 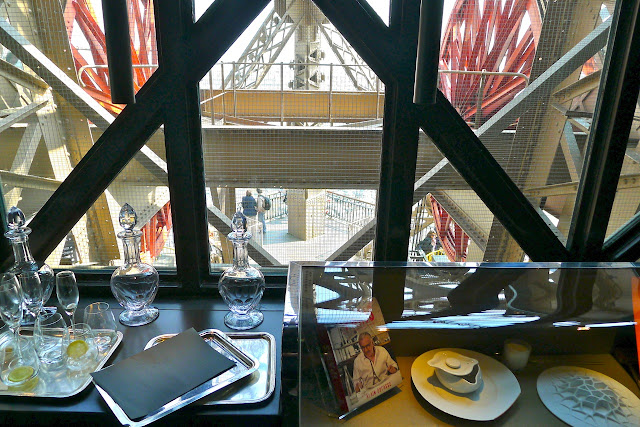 Unfortunately, we were on a tight schedule and did not make it to the top but next time we are in Paris I’d love to go back to Le Jules Verne one evening to see ‘The City of Light’ in all its illuminated glory and, of course, to sample more of Alain Ducasse’s wonderful cuisine.