Perhaps it exposes my ignorance or shows that I watch too much telly, but if you asked about my opinions of Australian food, my initial thoughts would be of vegemite, cans of XXXX and Foster’s and Paul Hogan offering to throw another ‘shrimp on the barbie!’

However, when you think a little harder you soon realise that, working in some of the World’s greatest restaurants, there is a plethora of hugely talented Australian chefs. Peter Gilmore’s Quay, Ben Shewry’s Attica, Tetsuya Wakuda’s Tetsuya’s and Mark Best’s Marque all feature in the S.Pellegrino list of the World’s 100 Best Restaurants.

Whilst in Singapore, I recently had the chance to meet, albeit briefly, another brilliant Australian chef, Brent Savage of The Bentley. Brent was in Singapore as guest of Ryan Clift, as part of the World Gourmet Summit. Ryan is the enormously talented young British chef in charge of The Tippling Club - he trained with Marco Pierre White, Raymond Capaldi and another Aussie, Shannon Bennet of Vue de Monde, the only antipodean offering in Les Grande Tables du Monde.

Of course, the successful Australian version of Masterchef has also added to the perception of the country as being one of the most exciting gastronomic destinations on the planet. If you are not planning a gourmet trip down under, Brent and Shannon both have excellent cookbooks, which are well worth checking out. As are Bill Granger’s; another chef from down that way, who is popular in the UK.

London also has a rich history of top Australian chefs working within some of its finest kitchens and foodie haunts. Before he went on to become head chef at Pierre White’s Quo Vadis (pre Sam and Eddie Hart days), Curtis Stone honed his skills working with Marco at the Café Royal and Mirabelle. MasterChef’s John Torode oversees Smith’s of Smithfields and other successful eateries. Paul Merrony, who trained with the Roux brothers, now runs the famous Giaconda Dining Room on Denmark Street, a longtime holder of a Michelin Bib Gourmand Award.

On the subject of Michelin, David Thompson of Nahm was the first chef to gain a star for a Thai restaurant, a place which is high on my ‘to do’ list. Two places, which that have now been ticked off that list, are Shane Osborn’s Pied à Terre, which we went to last year and, the subject of this blog post: Brett Graham’s The Ledbury. Interestingly, of the eight London restaurants with two stars, three have British chefs, three have French Chefs and two have Australians running the pass.

The Notting Hill based ‘The Ledbury’, which at number 34 was the highest new entry in the Restaurant Magazine’s 2011 S.Pellegrino list of the World’s Best Restaurants, has had a real buzz about it for some time.

So, it was to The Ledbury on a sunny June morning, after being picked up from our hotel by my good, London Cabbie pal, Richard (who was best man at our wedding) that my wife and I headed for one of loveliest lunchtime’s of our lives.

Felling in high spirits from having just caught up with an old friend, we were greeted warmly by the Ledbury staff and were offered the chance to take our lunch in the dining room or outside. Taking advantage of a rare spell of sunshine in the otherwise overcast week, we decided to go al fresco. So far, a perfect start to the day that could only be made better with equally perfect food – suffices to say, we were not disappointed. 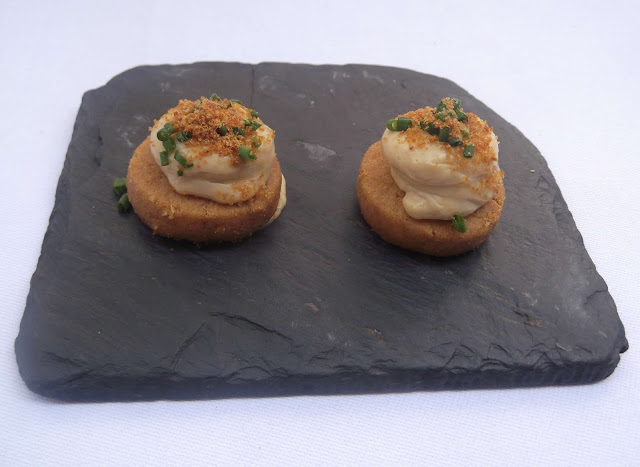 Our amuse bouche consisted of the perfect Foie Gras and Ginger Parfait and crispy nuggets of Rabbit, cooked with a buttermilk and courgette crumb, served over aromatic pine needles. 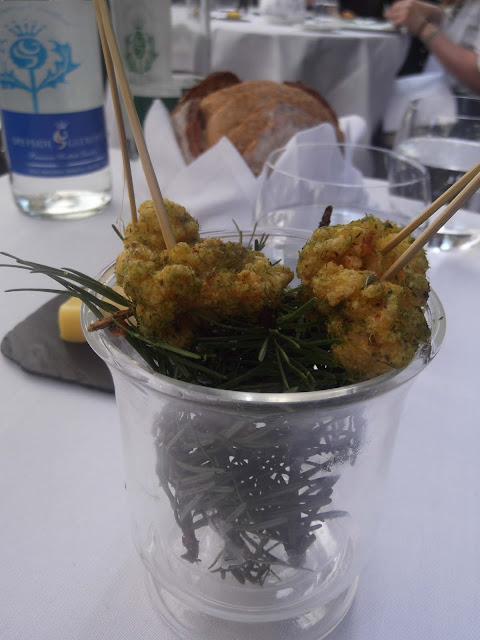 The breads that were served were exceptional: The Sourdough (a usual favourite of mine) was full of flavour and fresh from the oven. The Crystallised Malt was also very good. The real star however, was The Onion and Bacon Brioche – I’m not sure how many I had, but there was no way I was going to turn one down… and they did keep offering!

To start, my wife opted for the Crisp Guinea Fowl with White Asparagus, Arbois and a Stuffed Morel – the same combination of white asparagus, Arbois wine and a deliciously plump morel that we had a Sketch, but this time accompanied by three tasty pieces of crisp guinea fowl. 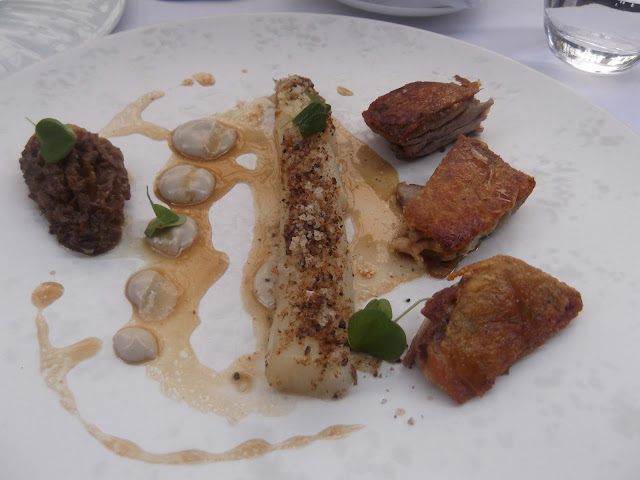 My choice of starter was Thinly Sliced Courgettes with Hand Picked Crab, Wakame Oil and Frozen Parmesan – the refreshing parmesan snow sprinkled on the fresh green hues of the leaves and courgettes and topped with a vibrant canary yellow flower made this the perfect choice for enjoying in the sun. 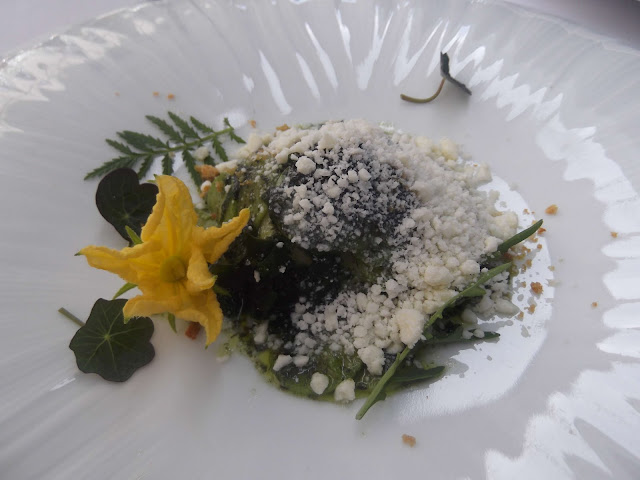 My wife’s main of Roast Monkfish with Wild Fennel, Elderflower and Mousserons was, a visual work of art; the delicate elderflowers delightfully dotted around the stone-grey plate. 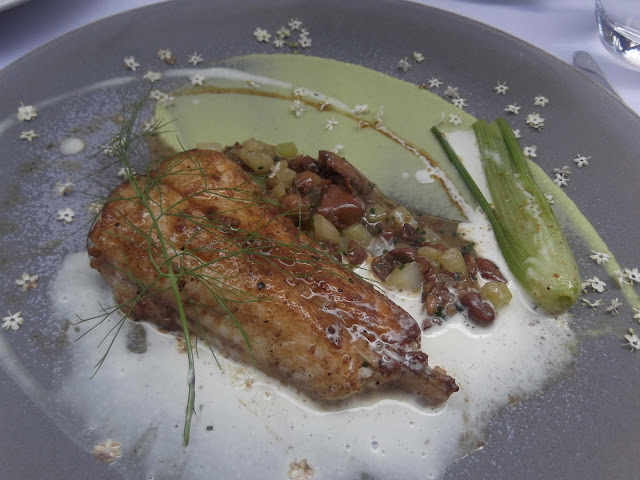 My main was Pork Cheeks Cooked in Pedro Ximénez with Peas and Black Pudding – as expected, the pork cheeks were fantastic; a welcome surprise, not given away by the menu description, was the salty pork kromeski and the toasted almonds, grains and puffed rice, that added a cracking crunch to the whole dish. 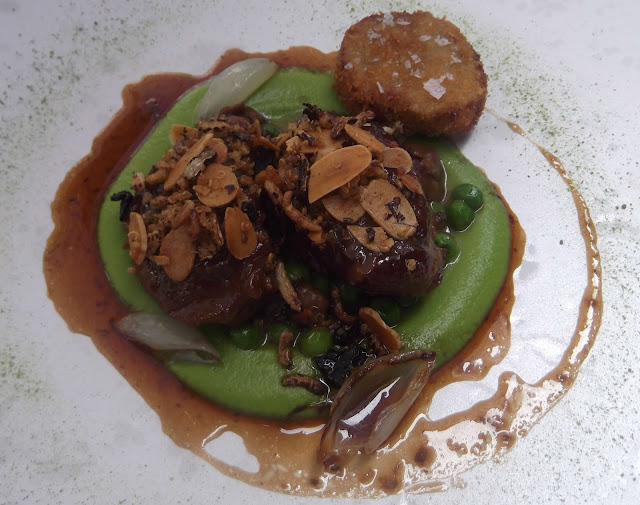 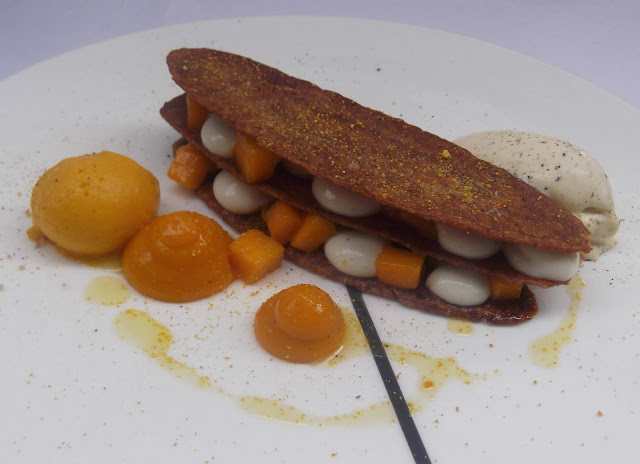 As usual, I went for the Cheese from the Trolley – a great selection of top quality cheeses. I chose four favourites: a creamy Bavarian Blue, an earthy Gruyere Alpage, a fruity and mildly nutty Morbier and a tangy Munster from Alsace. My final choice, featuring a rind covered with rosemary and aromatic herbs, was one that I had not previously tasted; a semi-soft sheep’s milk cheese from Corsica called Fleur de Maquis – a subtle nutty taste (although, a bit more than the Morbier) and a meltingly soft texture. 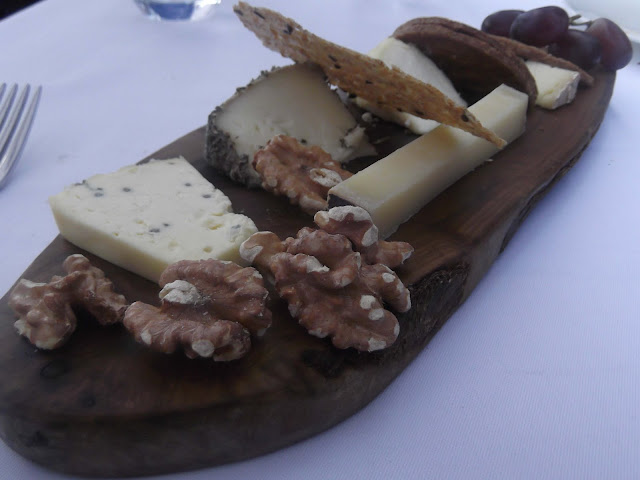 The Petit fours were served in quirky antique biscuit tins. The Hazelnut Sablé was sublime but the summery taste of Raspberry Jelly was the perfect way to end a meal sat outside in the London sunshine. 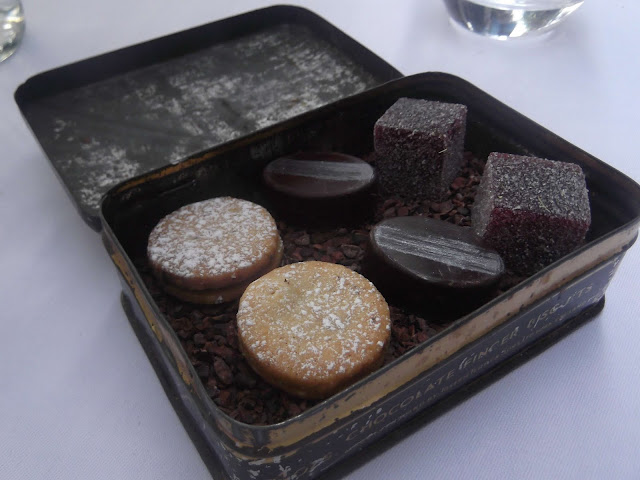 So now if someone asks me about Australian food, I will not be thinking about Paul Hogan and his barbequed shrimps; I’ll be thinking about Brett Graham and The Ledbury and telling them about a truly bonza lunch.