There are currently four 3 Michelin Star restaurants in the UK; prior to visiting Restaurant Gordon Ramsay earlier this month I had visited just two of them*.

(For my views on The Fat Duck, see here & here for Alain Ducasse at The Dorchester.)

There are a few reasons why I hadn’t previously dined at Ramsay’s flagship restaurant (any of his restaurants, for that matter). The first is the fact that, to me, he always comes across as a bit of a… erm, dare I say, ‘knob’? (Albeit a very talented knob.)

The second is since the allegations of his 'seven-year affair' with 'professional mistress' Sarah Symonds, my wife has flatly refused to entertain the idea of eating there.

Even when I’ve pointed out to my wife that Gordon’s wife, Tana, had ‘forgiven’ him, she was having none of it. 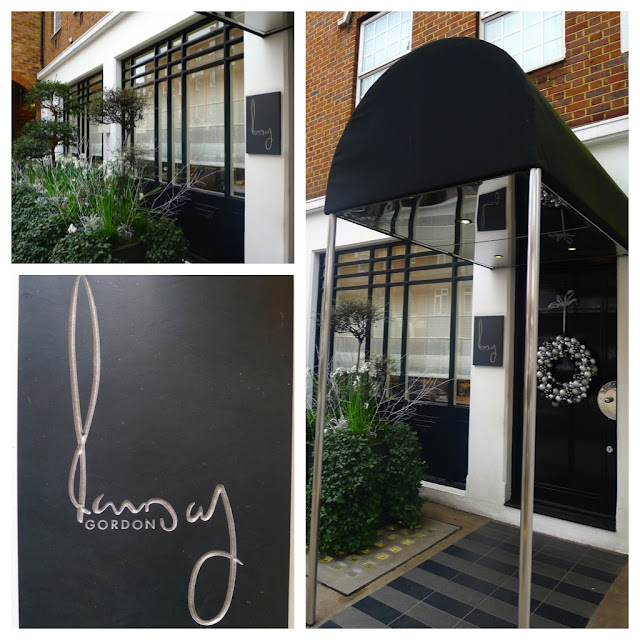 This time, I tried a different tack by pointing out that Gordon is seemingly either in America of hanging around with David Beckham. I argued that ‘the angry chef’ probably has little to do with the day to day running of the restaurant, that, despite what is says on the door, could perhaps be better described as Restaurant Claire Smyth on Royal Hospital Road. 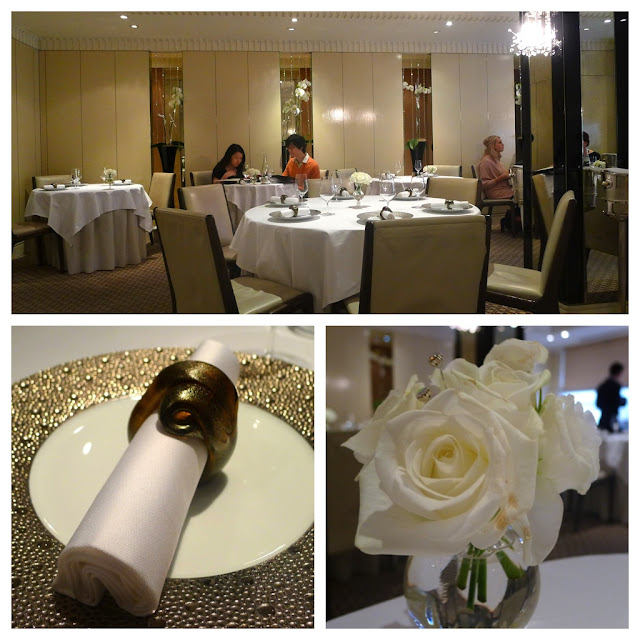 Chef Patron Clare Smyth, wasn’t even born when Pierre Koffman opened Le Tante Claire on the site in 1977. However, after first working at the restaurant from 2002 to 2005, followed by stints at the French Laundry and Alain Ducasse’s Le Louis XV, she became head chef in 2008 and has maintained three stars throughout her tenure.

Clare is one of the world’s most celebrated female chefs – her latest accolade was being selected as the Good Food Guide’s Chef of the Year for 2013.

The food at Gordon Ramsay to my mind (and palate) was pretty much flawless in design and execution… dishes are not rustled up or conceived overnight, they are tried and tested recipes honed and perfected over years. I could prattle on about how the flavours balanced; how seasoning was spot on and how beautiful they looked but I feel it would be pointless and pretentious to go into minute detail about every dish – for each dish, take all this as read. 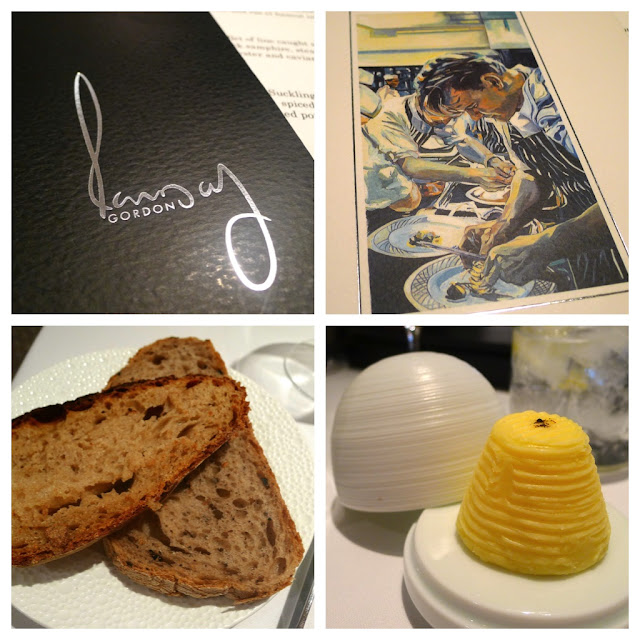 Amuse bouche: Pumpkin soup, Alsace bacon, Vacherin Mont d'Or, homemade ricotta with white mushrooms and black trompettes – my wife and I both loved this (preferring even it to her chosen starter.) 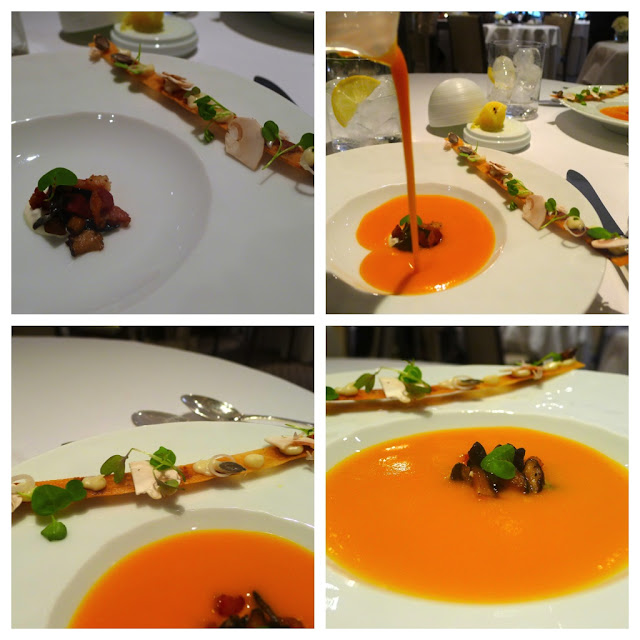 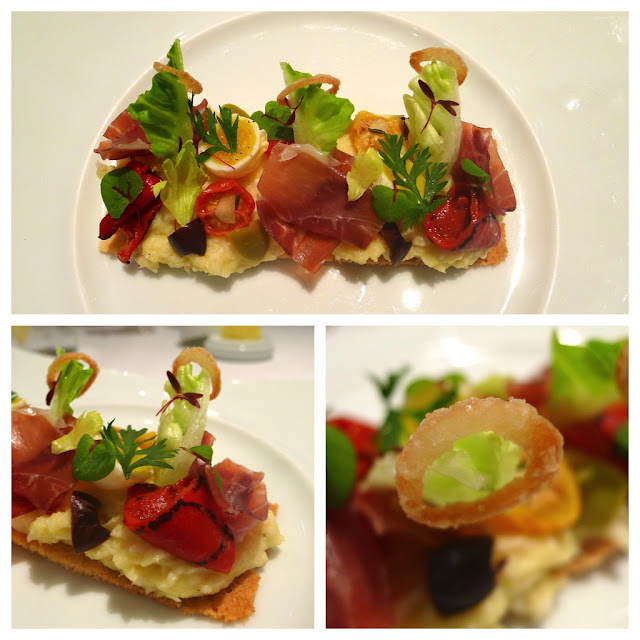 Instead of overpowering, the flavour worked to bolster and boost bursts of sweetness from the chargrilled piquillo peppers, tomatoes, fried shallots and salad leaves. Slivers of the most wonderful Noir de Bigorre ham then crowned the ‘tartine’ accompanied by sumlime salty sparks from black and green olives the rich quail’s egg. 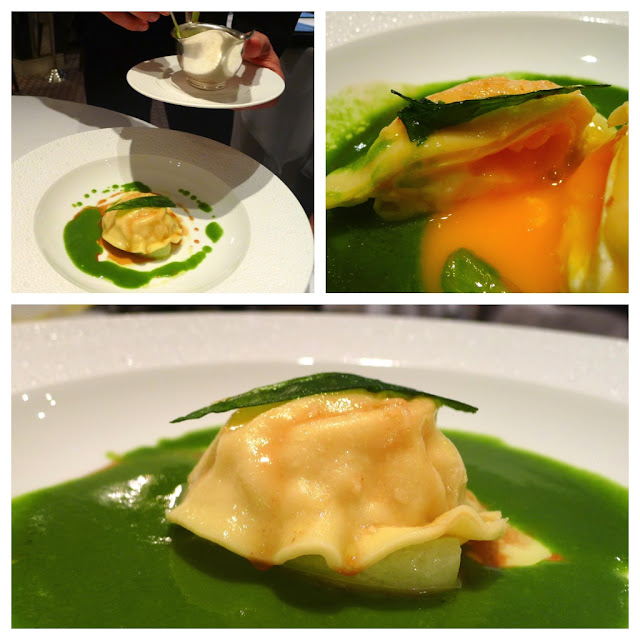 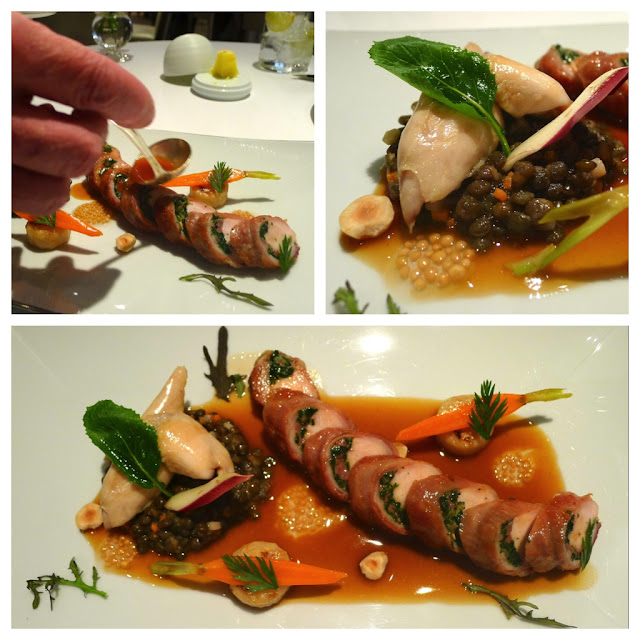 Roast rabbit loin with Bayonne ham, confit leg, Puy lentils, toasted hazelnuts and pickled mustard seed – my main. On paper this dish reads like just one of a plethora of ‘peasant dishes’ one could find on many a rustic Bistro menu in France. The joy of many high-end restaurants is seeing these types of recipes and ingredients refined so splendidly - the pickled mustard and toasted hazelnuts examples of ‘those little touches’ that elevate such dishes to chef-d'oeuvre levels. 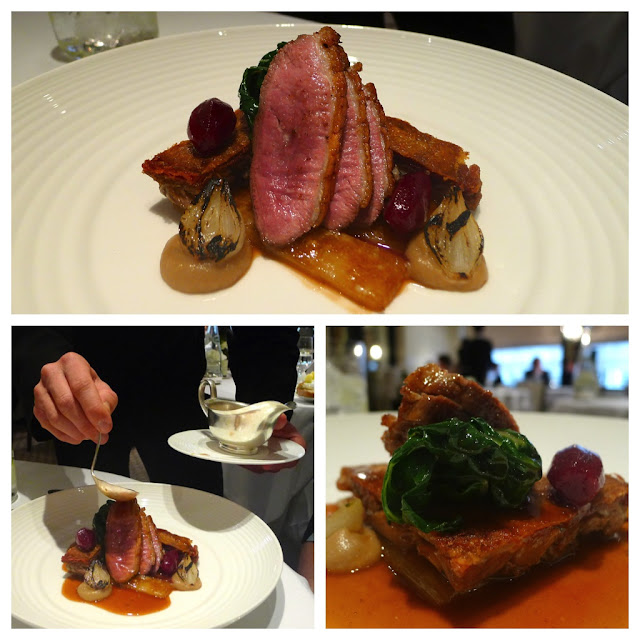 Spiced free range Devon duck with Swiss chard, beetroot and grilled onions – my wife’s main. I managed to snaffle a strip of the duck meat, which was just magnificent - the gentle spicing, rich jus, beetroot, chard and charred onions making for a wonderful wintery dish.

Selection of cheeses from the trolley – my dessert. When faced with a choice of cheese or a dessert created by the kitchen, I often feel as though I ‘should opt’ for the latter; almost as if to test or appreciate their creativity and skill. However, having walked passed the cheese trolley on my way in, there was no way I was going to be able to overlook such a high quality board. 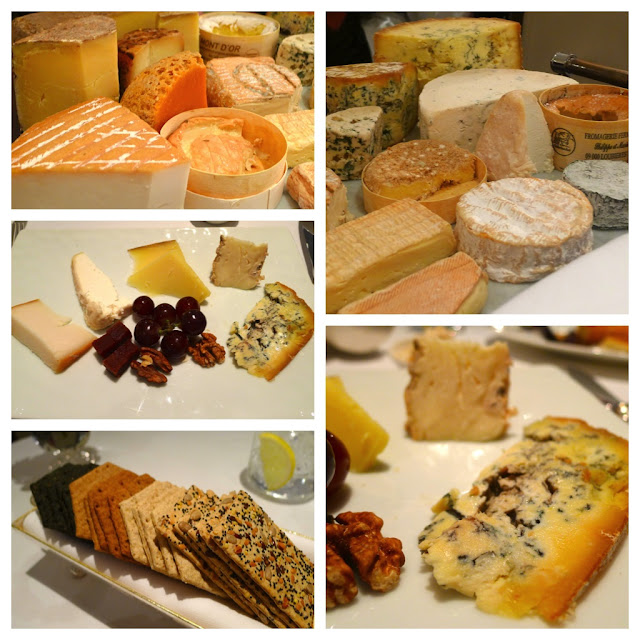 I went for an Italian Taleggio Valsassia and a selection of French cheeses: Pouligny St. Pierre, Beaufort Chalet d'Alpage, Tomme De Cleon Au Jurancon, Le Cabri Ariégeois and Bleu de Gex – the only cheeses I had not tasted before were the Tomme De Cleon, which I found to have a sweet aroma and fruity taste with a hint of vanilla, and the Le Cabri Ariégeois, which is akin to a goat’s cheese version of Mont d’Or with similarities to Reblochon. 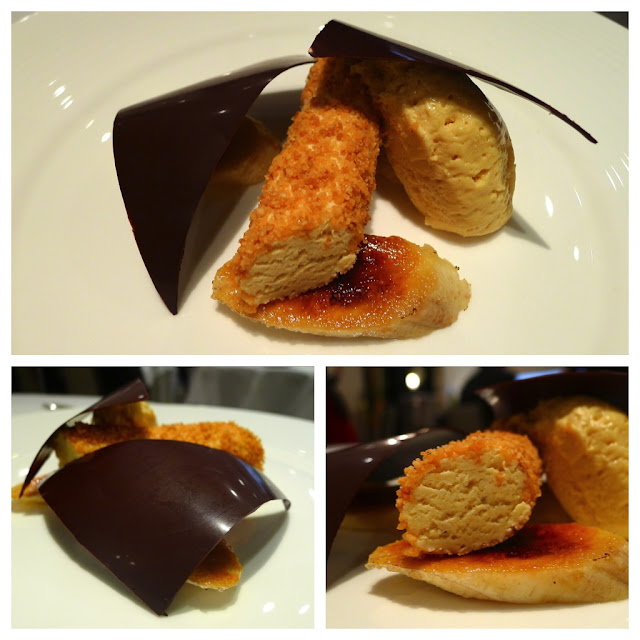 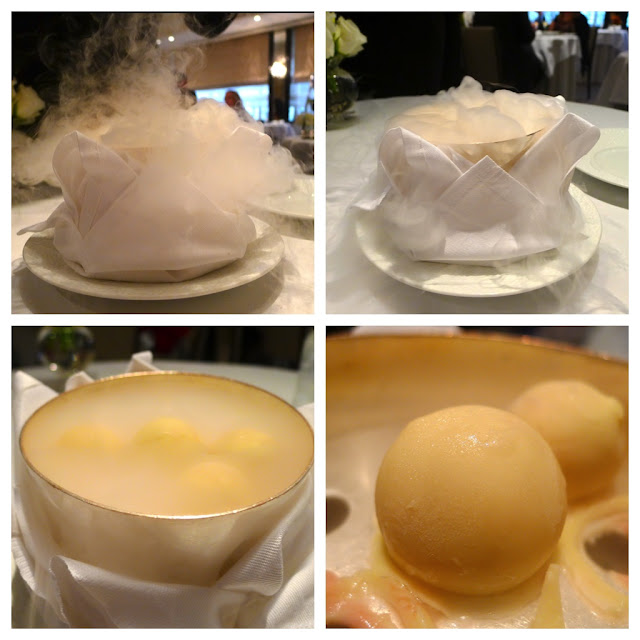 Obviously easily pleased, a bowl of billowing dry ice never fails to thrill me - when the smoke cleared to reveal White Chocolate & Strawberry Iced Bonbons I was even more thrilled. 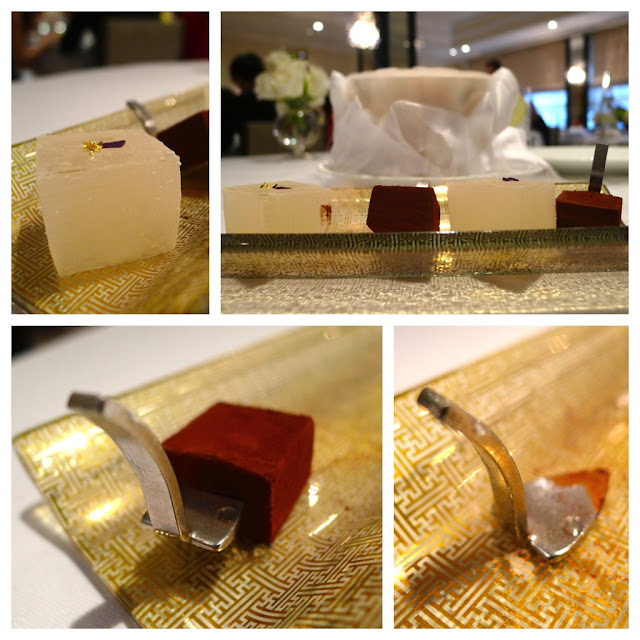 I must have been feeling giddy, for when the Mignardises arrived featuring rose water and lemon ‘Turkish Delights’ and rich chocolate ganache, I was equally impressed by the dinky ganache trowels. 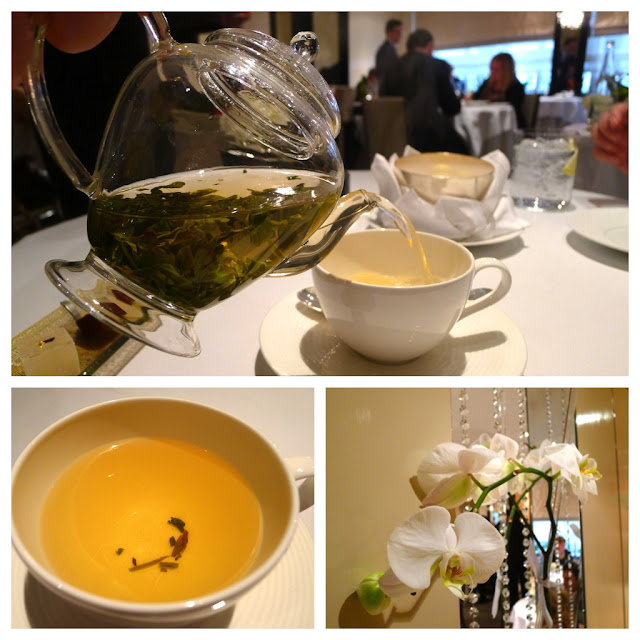 Do I still think Gordon Ramsay is a knob? Yes.
Has my wife forgiven Gordon for his alleged affair? No.
Would we go back? In a heartbeat!