Apsleys, a Heinz Beck Restaurant at the Lanesborough Hotel, London

When planning where to eat during our recent trip to London I had drawn up a list of places I most wanted to visit – these included, bloggers’ favourites: Dabbous, Hedone, Kitchen Table at Bubbledogs, The Square, Upstairs at The Ten Bells, Shiori and Sushi Tetsu… they were either fully booked or closed for the first week in January!

Instead, I resorted to going through the list of starred restaurants on my Michelin app until I found ones that a) were open and b) had a tasty looking menu.

I didn’t have to look far… under ‘A’, I noticed ‘Apsleys, a Heinz Beck Restaurant.’ 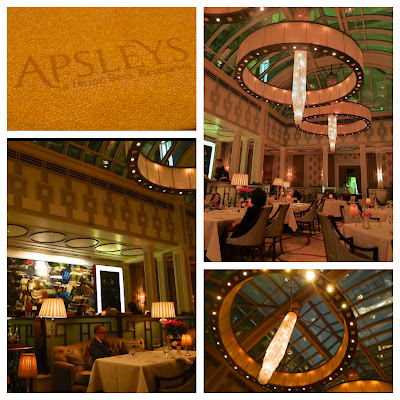 Prior to this, Apsleys at the Lanesborough Hotel was curiously ‘not on my radar’. Of course, I had heard the name but beyond that didn’t know anything about the style of food or the ‘chef’.

Until recently I hardly ever ate at Italian restaurants, believing I could cook better at home. But since Italia in Manchester (see here) rekindled my childhood love for Italian food I have been keen to eat at a high end ‘ristorante’. 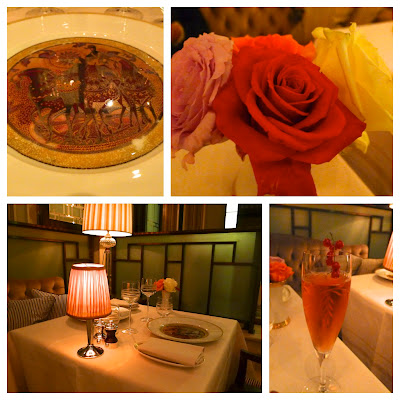 What Michelin say: ‘Under the guidance of celebrated chef Heinz Beck from Rome‘s (3 Michelin starred) La Pergola (to discover more about La Pergola, check Mrs. Petticoat’s blog – here). Exquisite and precise Italian cooking, in a grand, eye-catching but far from intimidating room, designed by Adam Tihany. The serving team are polished and the atmosphere reassuringly upbeat.’

Tasting Menu (I apologise for the quality of the pictures but my camera just wasn’t up to the romantically lit setting).

Bread: The breads were good; especially the ‘Carta di Musica’ but it’s the olive oil that deserves a special mention. It was so good that I asked the waiter to write down the name for me: ‘L'Olio Extravergine di Oliva Sabina DOP’  (I plan to buy some and carry out a taste test alongside my current favourite, ‘Pórtico de la Villa’). 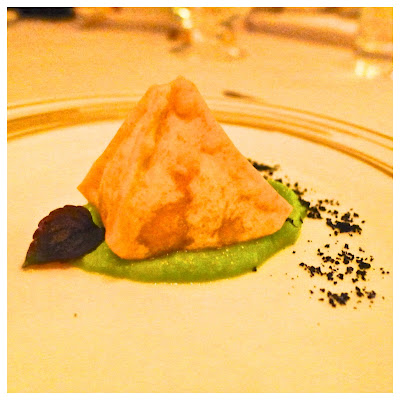 Amuse bouche: Crab and Lobster Raviolo with a broccoli purée and black olive powder – an excellent start to the meal, filled with generous pieces of seafood. 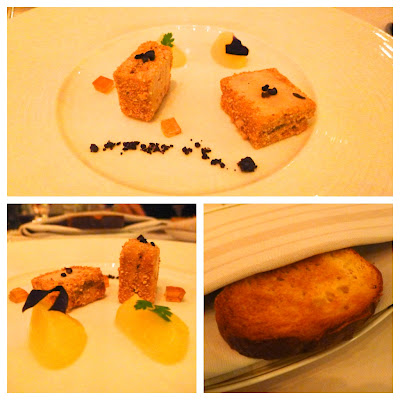 Foie gras terrine with smoked apple and amaretti – this dish was an absolute joy. The subtle nuances of the smoke and almond flavour of the amaretti livening the liver, apple and toasted brioche in the most delicious way. 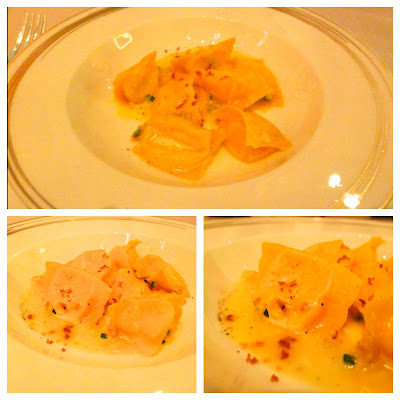 Carbonara fagottelli – these bursting pouches of bliss were truly exceptional, my friends The Critical Couple describe the dish in all its glory much better than I ever could – here. (They also have much better pictures.) 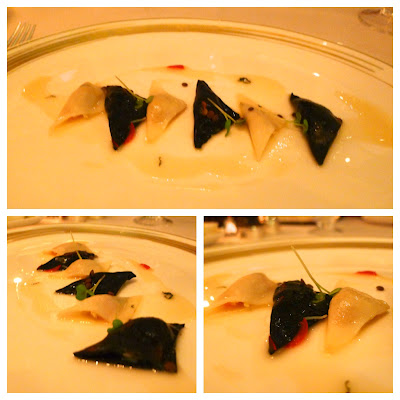 Scallop leaves filled with King crab and mojito sauce – I loved this dish… slivers of scallop carpaccio (half of which had been died with squid ink) had been folded over the delicious king crab filling and drizzled with the citrusy mojito sauce. ‘Lenticchie verdi’ seeds added a bit of crunch. 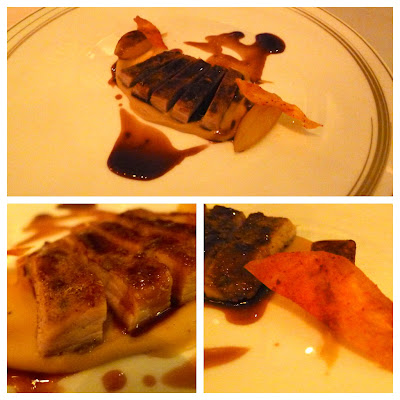 “Segreto” of Iberian suckling pig with liquorice, chestnut and golden apple – I had my doubts about this dish on paper due to the liquorice but it was thankfully used sympathetically and the apple was not too sweet for my taste. The pork chestnut purée added a gorgeous autumnal element but it was the sweet juicy sous vide pork and chilli spiced pumpkin crisps that I enjoyed the most. 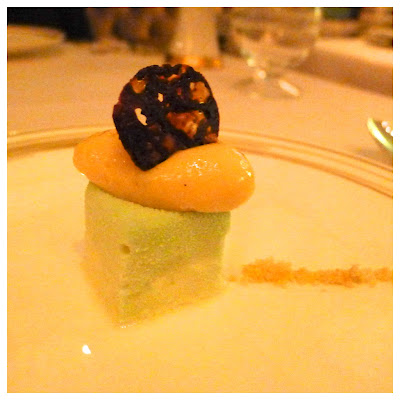 Pre dessert: Lime Cheesecake with banana sorbet, chocolate crisp and lime sherbet – the lime cheesecake and sherbet was lovely, clean and fresh tasting. I’m not the banana’s biggest fan but the sorbet was a delight. I actually enjoyed this dinky plate cleanser more than the main dessert offering. 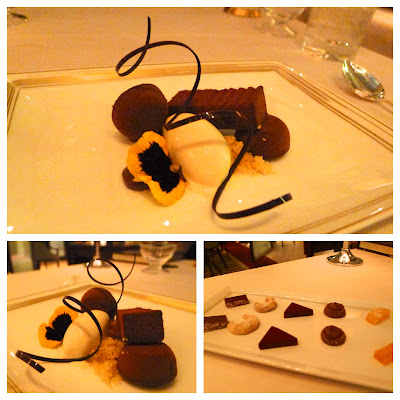 Milk chocolate, coconut and pineapple sorbet – topped with the chocolate spiral, the dessert looked the business but it was an underwhelming end to an otherwise excellent meal. For me, the pansy petals offered nothing in terms of taste.

The room was magnificent. The service was impeccable. We’d love to return (although probably for lunch to get some decent lighting for the pictures).