Neighbourhood in Manchester’s shiny Spinningfields development is a self proclaimed ‘New York eatery and bar inspired by Manhattan's definitive neighbourhoods.’ 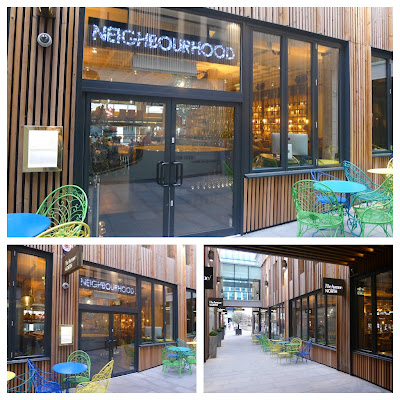 Open since the end of November last year, is the sister restaurant to the American BBQ joint, Southern 11. Owner James Hitchen is clearly a bit of a ‘Yankophile’ - I've never met the 'dude' but I like to think he is something like Peter Serafinowicz’s Tex character in the Alan Partridge series.

As the T-shirt says, I love New York. So, since its launch, I had been eager to check it out. 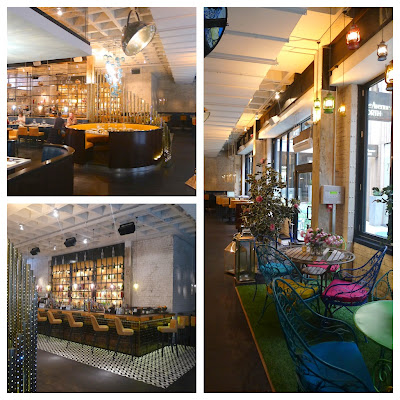 I was surprised then, that (a few influences on the menu aside) the venue and experience in no way reminded me of anywhere or anything ‘Big Appley.’

If anything the industrial edge softened by bold pops of colour were more reminiscent of somewhere a little closer to home… i.e. Manchester!

My advise is to drop any reference to it being ‘New York’ style and focus on promoting it as one of Manchester’s best venues for all day casual dining. 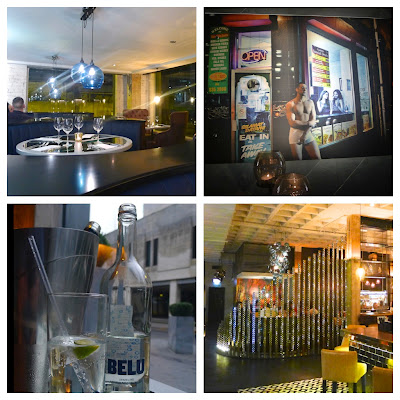 Having previously browsed the menu a couple of weeks prior to visiting my wife and I arrived about 2pm to discover that most of the dishes we had fancied were only on the dinner menu which isn’t served until 4pm.

Rather than order from the lunch menu, we ordered a bottle of wine and decided to wait. To tide me over I also sampled a Mini Wagyu Slider and Roast Corn with chilli, onions and cheese – both were well cooked and made pleasant little snacks. 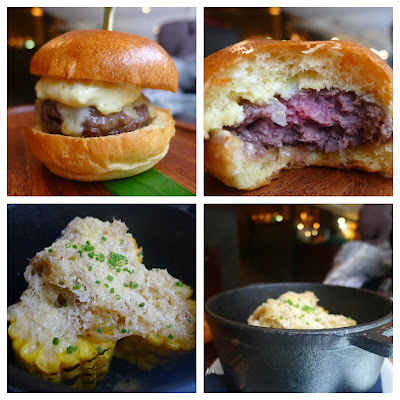 A charming young waiter called Nathaniel looked us after throughout the afternoon and 4pm soon arrived… my wife and I chatted about how good it felt to have discovered a cosy and welcoming venue to drink and relax in both before and after a bite to eat. 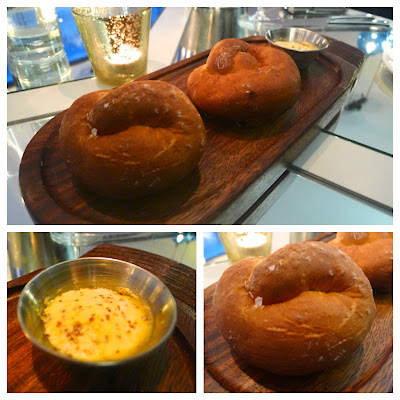 We felt the ‘Bread Basket’ which featured a couple of hard, chewy rolls that were warm on the outside and chilled in the middle, served with rock hard wholegrain mustard butter at £4.50 was a bit of a liberty. 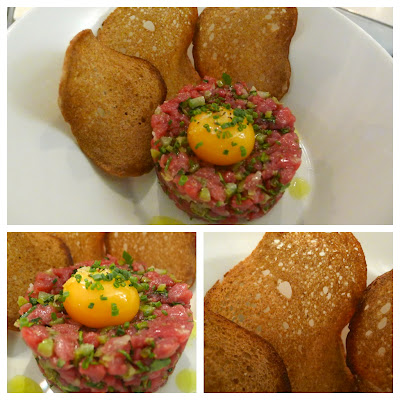 In our opinion, the Hand Cut Steak Tartare with raw yolk & rye bread toast was a good dish – a little more caper and seasoning would have made it very good. 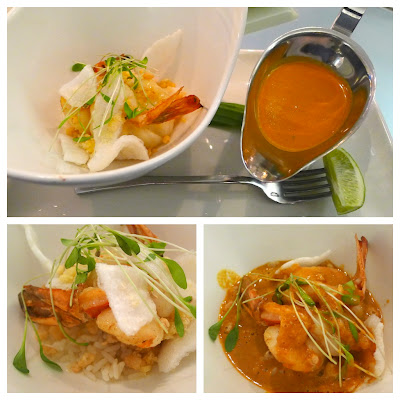 The Shrimp Crackle & Pop featuring a Jumbo shrimp, shellfish bisque, rice krispies, popping candy & shrimp chips was a fun and well conceived dish. If the accompanying bisque’s flavour could be intensified a little then I believe this would be an excellent dish. 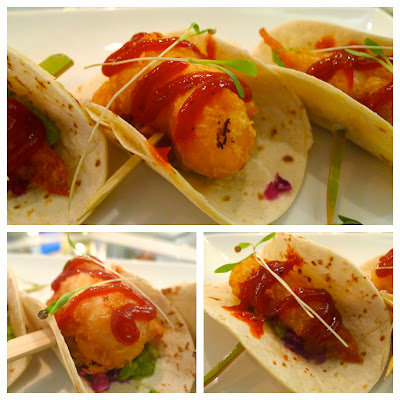 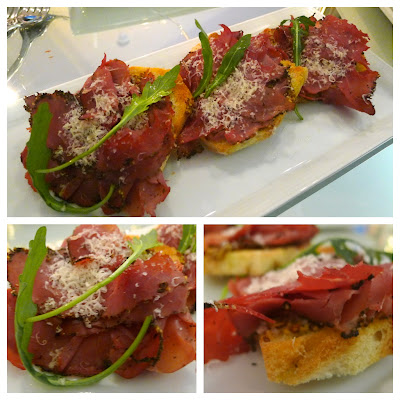 I loved the NY Pretzel made with crostini, pastrami, cheese & grain mustard – the pastrami had good depth of flavour and the generous veneer of mustard gave the dish some punch. 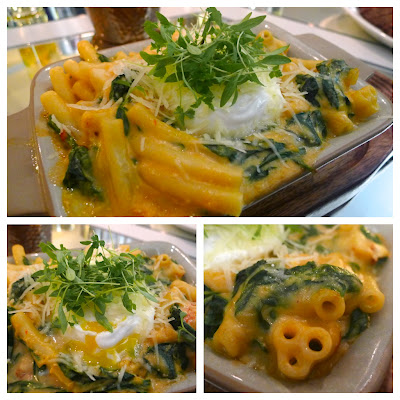 The Baked Lobster Mac & Cheese with free-range egg & baby spinach was also good but could have done with a little more seasoning for my taste. The egg was poached well and there was a reasonable amount of lobster meat for the price paid. 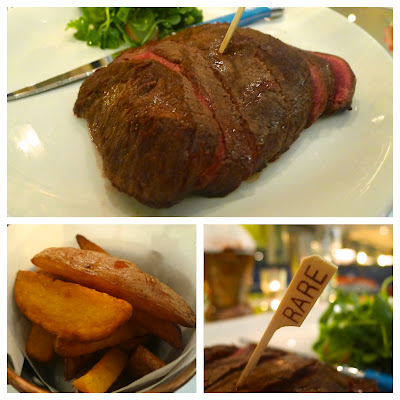 The 12oz Flat Iron Steak at £14 was also keenly priced and cooked well enough. It was a little tough (as this cut can be) and lacked a little flavour compared to places in Manchester who cook their steaks over hot coals. The side salad was simple, fresh and nicely dressed and the ‘Neighbourhood fries’ (aka potato wedges) were also good. 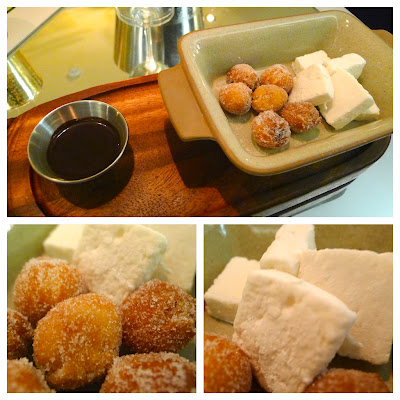 For dessert my wife plumped for the Box of Doughnuts (at £7!) with chocolate dip & marshmallow. The doughnuts were more like ‘nuts’ than ‘dough’ in that they were rock solid. The marshmallows were good. 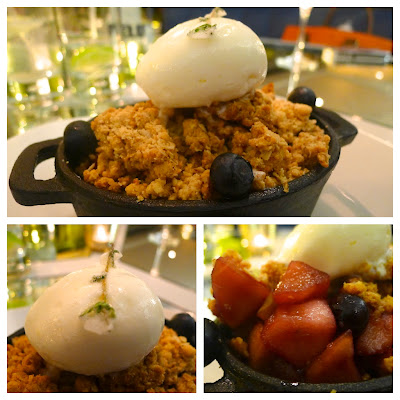 My Blueberry & Apple Crumble with milk ice cream, thyme sugar, granola crumb made for a tasty end to the meal. Some may not be a fan of the chunky crumb but I quite enjoyed it.

Forget Manhattan… this is Manchester – “The city that never sleeps!” *

* I say never, Neighbourhood is open daily until 1am (3am on Fridays & Saturdays).

As, they serve breakfast, brunch, lunch & dinner, I’m sure to be back sooner rather than later.