A week ago today, a life-size statue of L.S. Lowry and I found ourselves the first two customers in Sam's Chop House for breakfast. 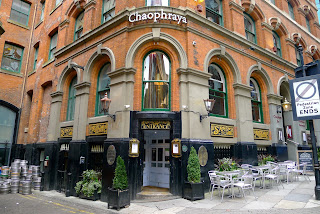 Famous for his paintings of ‘matchstick men’ and urban and industrial landscapes, in life, Lowry was a regular at Sam's for many years. Whilst the bronze (placed to mark the 35th anniversary of his death) propped up the bar, I enjoyed a delicious ‘full English’. 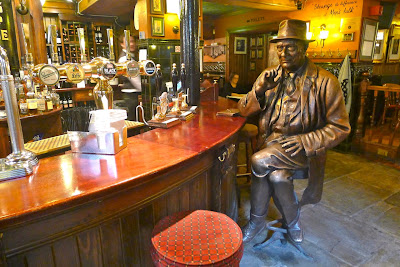 Not generally a fan of a hearty fried brekkie, wanting something a little lighter, I opted for ‘Sam’s Veggie Breakfast’ over the omnivorous ‘Best of British’. They also offer ‘Sam’s Famous Crispy Corned Beef Hash Cake’ ‘Eggs Benedict’ ‘Eggs Florentine’ as well as a range of ‘barms’ ‘porridge’ and other assorted breakfast favourites. 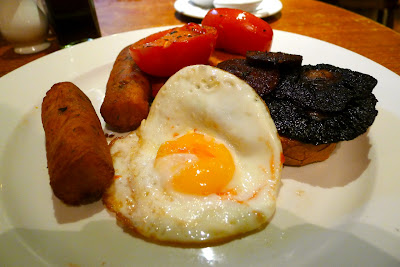 In the veggie version, the ‘Old English’ sausages are replaced by ‘Home-made Glamorgan’ sausages and the traditional blood sausage is replaced with a vegetarian version from the Real Lancashire Black Pudding Company (the same ones that Simon Rimmer serves in his restaurants Greens and Earle). 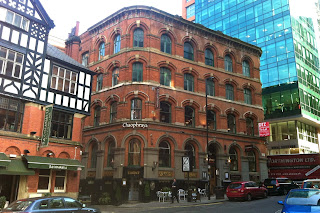 Overall, it was a very enjoyable breakfast. The staff were very friendly and service was swift and efficient. With a history dating back to 1872, Sam’s (or its older brother Tom’s, around the corner, 1867) are well worth a visit to anyone interested in Manchester’s Victorian heritage; the great British pub or classic British fare.