For the majority of diners in and around Manchester, the name Tim Bacon may not ring any bells. But when you start mentioning hotspots like The Alchemist, Gusto, Grill on the Alley (and the other eight Black House Grills), Suburbia and The Oast House – bells with surely start to chime. 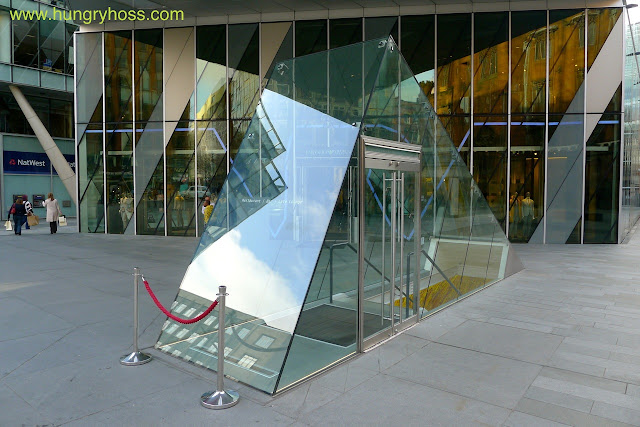 These places all belong to Living Ventures; the Knutsford based company started by Tim and his business partner Jeremy Roberts in 1999. Recently they publically stated their plans to open ‘an ultra-fine dining restaurant’ in an attempt to return Michelin stars to the currently starless city – which, I personally, cannot wait to see! 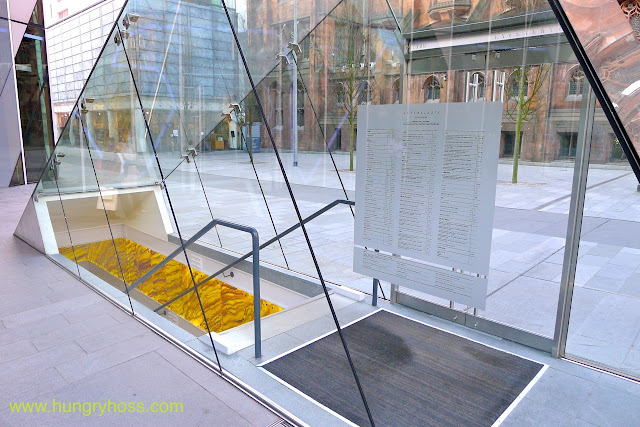 In the meantime, one of their latest ventures is the ‘fusion’ restaurant - Australasia. Offering, ‘A menu of Pacific Rim flavours underpinned by European cooking tradition, an exotic blend of Indonesian and Southeast Asian influences. Australia's strong ties with Japan also help determine taste and style.’ 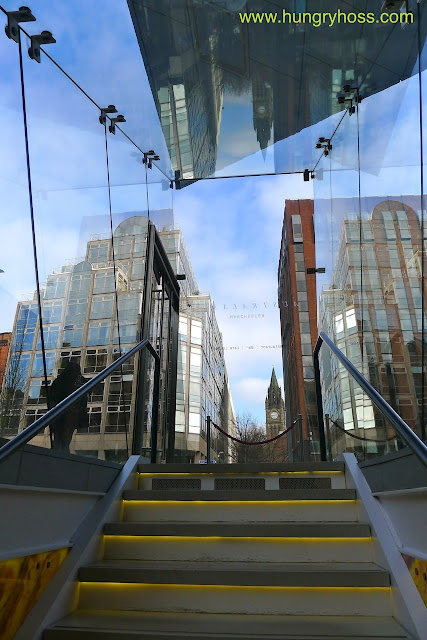 Since it opened, the best part of a year ago, I have been eager to visit and have followed the many reviews and tweets with interest. Jay Rayner, whom I respect, read and follow on twitter, was not overly impressed but he did love the soufflé. Matthew Norman, in The Telegraph, liked the whole package and was similarly bowled over with the soufflé. 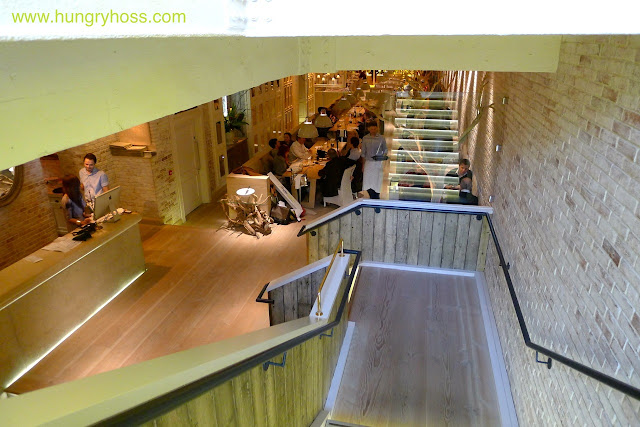 Entry to the subterranean restaurant and bar is gained via a glass-covered stairwell in front of the Armani emporium in the sleek and shiny Spinningfields development. Descending the stairs, the venue is certainly impressive - modish ‘modern rustic’ décor, done with style and attention to detail. Little things please me; such as the all white toilets, complete with an all white Dyson Airblade™ – “Dead classy!” as they say ‘oop North. 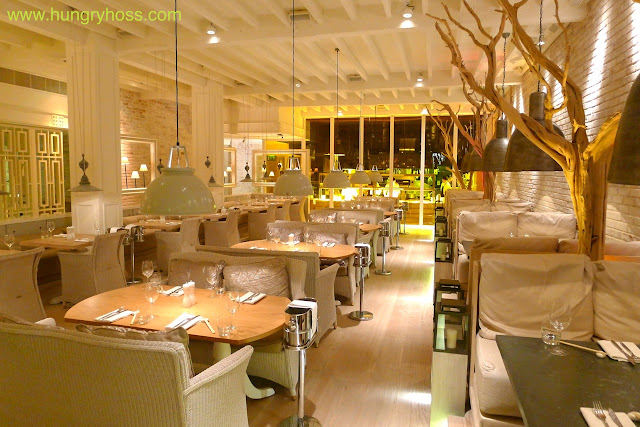 Or as they see it, "A stylish but laid back slice of modern Australian life... down-under in Manchester." 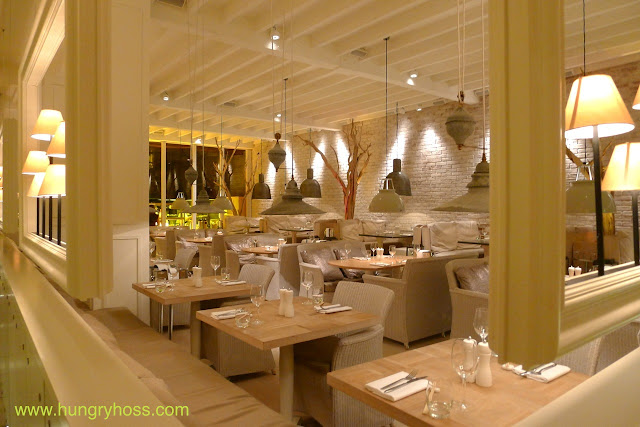 We were offered a booth quite close to the door. With hindsight I wish we requested to be seated further in, as I noticed a more ‘restauranty feel’ there. The seats themselves were very comfy – just the ticket after a long walk around Manchester. The tables, although good for placing a large number of sharing dishes, were very wide – the old romantic that I am, (between taking pictures) I do like to take my wife’s hand and remind her that I do love her as much as food, which was difficult without ape arms. 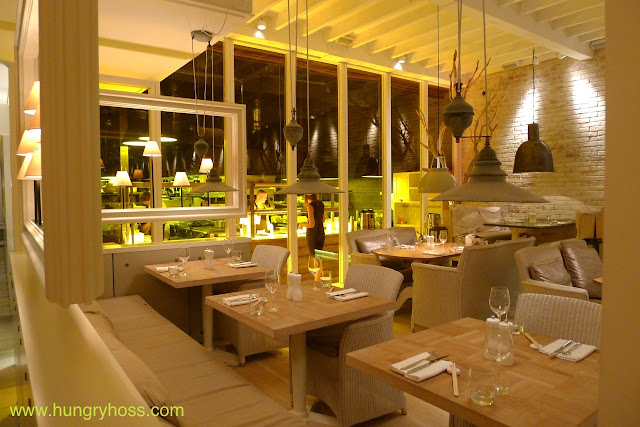 The menu suggests a couple of ways of ordering, the traditional route – starter, main etc… or going “local” and selecting several smaller dishes for placing centrally to fill the void of the ultra wide tables.

From the sushi and sashimi section of the menu we selected Smoked eel Nigiri (£6.50 for 4); Cucumber, tofu and asparagus ‘Californian Roll’ (£5.50 for 4) and Sashimi Scallop cured in sweet lime dressing (£9.50). 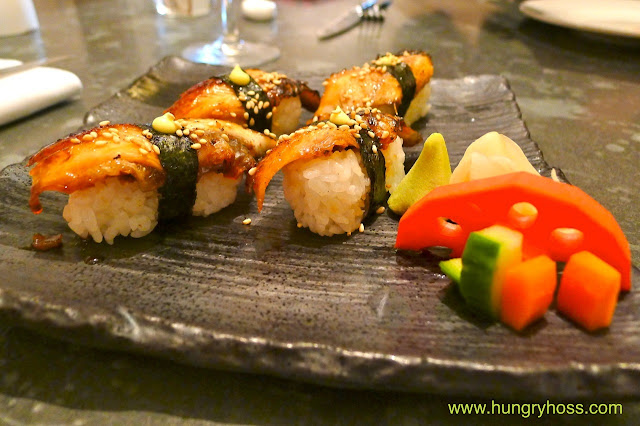 It has been said that Australasia is expensive but two pieces of nigiri at YO! Sushi will cost between £2.90 and £3.40; for a more direct comparison, two pieces of Eel nigiri at the nearby Spinningfields’ Samsi come in at £3.95 – so four pieces for £6.50 is similar,  in value... as was the quality. 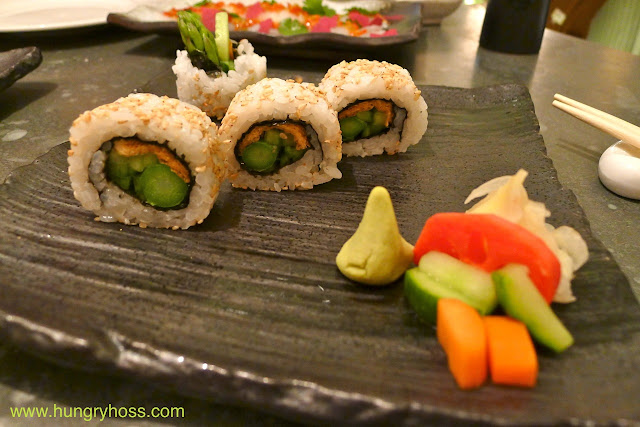 Offering similar value for money, the Cucumber, tofu and asparagus ‘Californian Roll’ was also attractively presented. Here begins the problem.  With a venue of this splendour you can’t help but expect more from the food. As much as I like YO! Sushi (see here), do I really want to be saying that the prices and quality are similar to somewhere of Australasia's promise? Shouldn’t it be better? 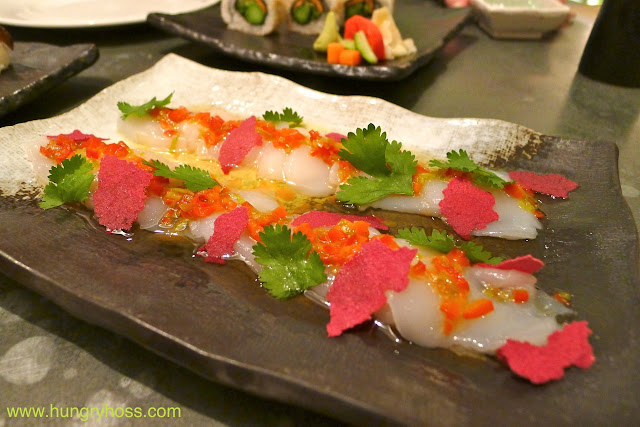 The next dish highlighted another problem for me. The Sashimi Scallop came 'cured in sweet lime dressing' – again, a question of expectation: I imagined a sweet citrusy dressing, not too dissimilar to a ceviche - what I got was the faintest hint of lime, not so much a taste… more of an essence. I felt a little miss sold. Remember edible wafer paper? – it had little red bits of that on it too.

Continuing with the Japanese theme, we ordered Tempura summer vegetables (£7.00) and Sweet potato with teriyaki dressing (for £4.50) 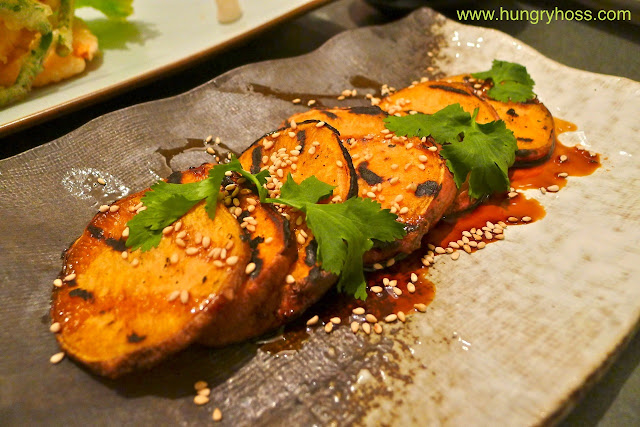 The Sweet potato with teriyaki dressing was very good - no gripes here. Well cooked; looking the part with attractive char marks from the Robata grill and tasting good with the sweet teriyaki - simple but flavoursome. 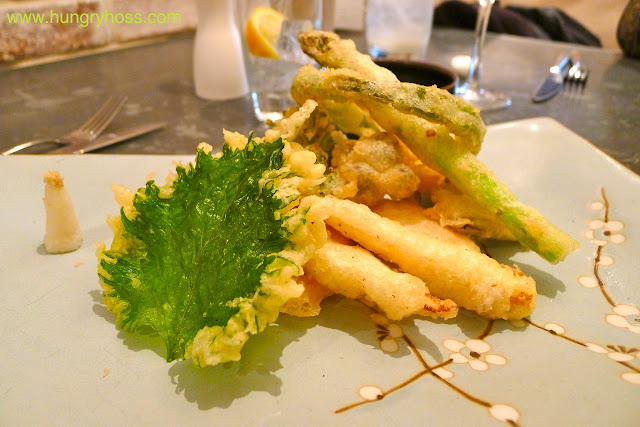 The Tempura summer vegetables were more of mixed story. They certainly looked good. I went straight in for the attractive looking tempura coated shiso leaf; only to fear that I was in fact eating some kind of inedible garnish… ‘What’s going on with this tempura batter?” I asked my wife.

“It’s alright.” she said, munching on a battered asparagus spear. It turned out that it was only the leaf that was coated in this curious plastic type batter - obviously for some sort of aesthetic value over palatability. The rest of the dish was good enough, including the dashi dip (but Yuzu in Chinatown (see here) does far a superior vegetable tempura for £4.95 – albeit a smaller portion). 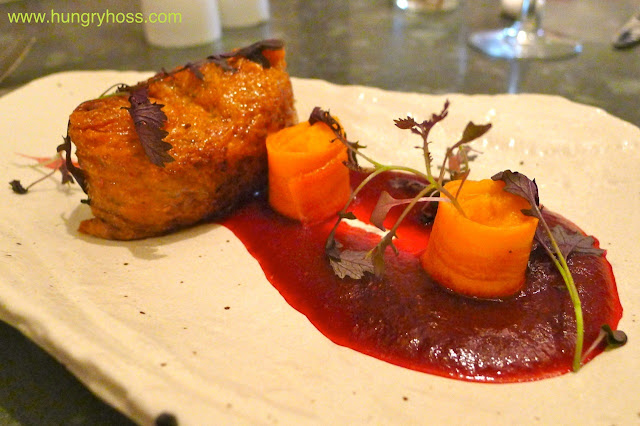 Another case of mistaken identity, when ordering the Salt & pepper tofu, I foolishly expected something resembling ‘salt and pepper tofu’. The dish itself, a large bean curd wrap containing subtle salt and pepper-seasoned rice, complemented by the sweet beetroot purée was actually quite enjoyable. But when expecting the usually fresh chilli kick of ‘salt and pepper tofu’ it was a disappointment. 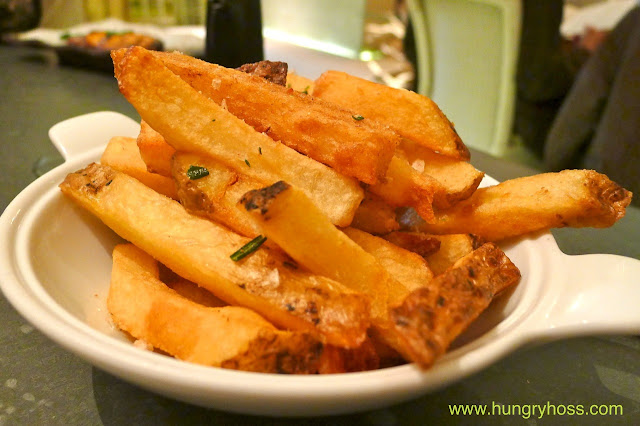 A silly gripe here, but I am on a roll. Can someone please explain exactly what a Seasoned ‘cut’ chip is? Surely all chips are cut; if not, they are just called potatoes. Taste wise; they were perfectly good for £3.50 – again in line with others in the city in terms of price and quality.

Not being wowed by the mains, we hoped that the much-hyped ‘Must Have Desserts’ would offer one last hurrah! A fan of crème caramel, my wife selected the Spiced summer berries and crème caramel with wild strawberry sorbet, whilst I excitedly ordered the Mango soufflé with coconut ice-cream and mango soup – the one that had so impressed Mr. Rayner. 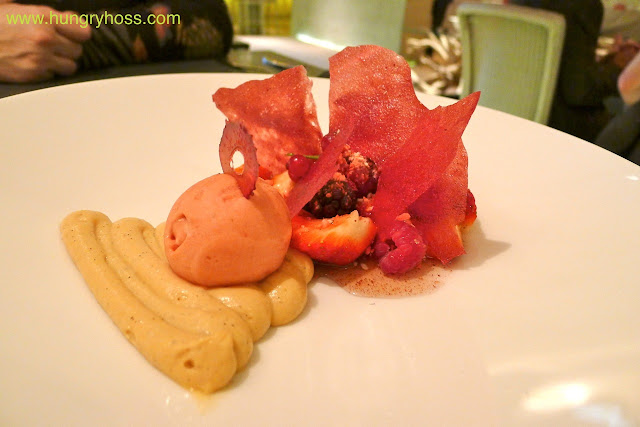 Another anti-climax, my wife’s crème caramel dish – surprise, surprise did not actually feature a crème caramel. Instead there was a mousse with a flavour resembling crème caramel – clever… but not crème caramel! The fruity part was excellent. 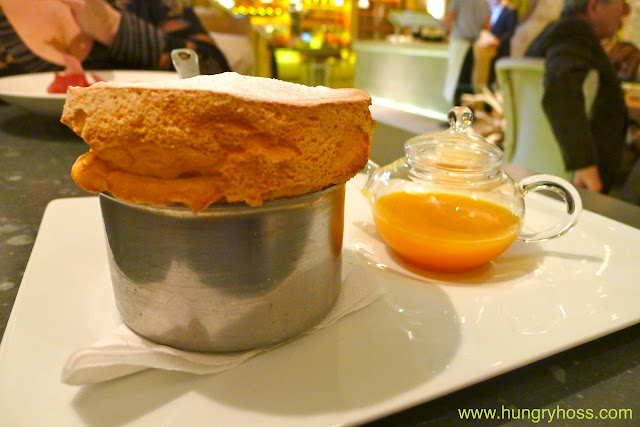 Whilst it can’t be argued that the soufflé had awe-inspiring altitude, I was not overly impressed by the flavour or texture – especially around the edges. Having eaten many more of them than I’ve made for myself, I cannot tell you much about the technicalities of the mix. All I know is that I found it more ‘eggy’ than the better soufflés I’ve enjoyed - the outside, in particular, reminiscent of a soufflé omelette. 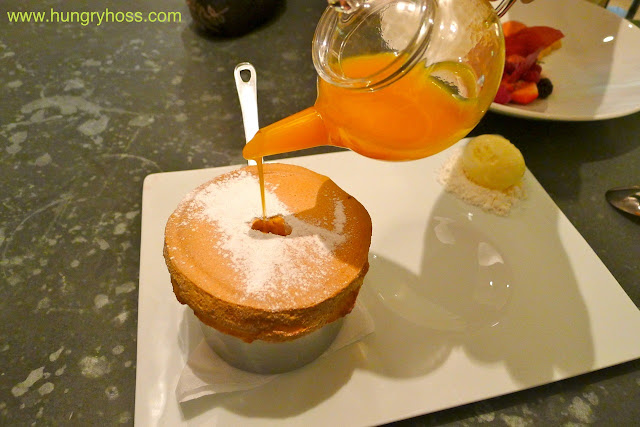 The accompanying mango ‘soup’ was good but the coconut ice cream, smooth as it was, also lacked a little in flavour.

This blog is about sharing my dining experiences (the way I perceive them). I don’t like having to write negatively, but wanted to share my disappointment.

Summing up,  to say it is all fur coat and no knickers would be a tad unfair. It does ‘have knickers’ - but whilst, I feel, the coat is made from the trendy Australian Brushtail Possum, the knickers are… erm... not your Sunday best.

I so wanted to like Australasia - if the 'just above average food' matched up to the 'way above average setting', I could see my wife and myself returning regularly. Let’s hope the Living Ventures' ‘Michelin’ starred restaurant does fulfil its promise.

Having slept on this post, I wanted to add a few words. Whilst, as a pretentious, over opinionated so and so, Australasia did not meet my expectations, I understand that for a great deal of the venue’s customers food is not necessarily the number one priority. Strangely “tempura’d” leaf aside, none of the food was actually bad; it just wasn’t very good - It's a great destination for food but not a great "foodie" (hate that word) destination.

On ‘Urbanspoon’ (which I often link to my posts) there is an option to click ‘I like it’ or ‘I don’t like it’ and I’ve been trying to decide which way to vote. On balance, I think I have to come down on the side of ‘I like it’ (maintaining their 100%) - I will return for the top-notch ambience and comfort; I just won’t expect the food to blow me away. I hope this ‘final thought’ explains my thinking better to anyone that has been and enjoyed the overall package; or those who are looking for somewhere with a wow factor (who are not too fussed about the food being a cut above.)