Fischer’s at Baslow Hall is actually the closest Michelin starred restaurant to our home. It’s one of those places that we have visited previously, enjoyed and keep saying we will return but don’t seem to get round to doing so. Now that we have been back… we promise to return more often! 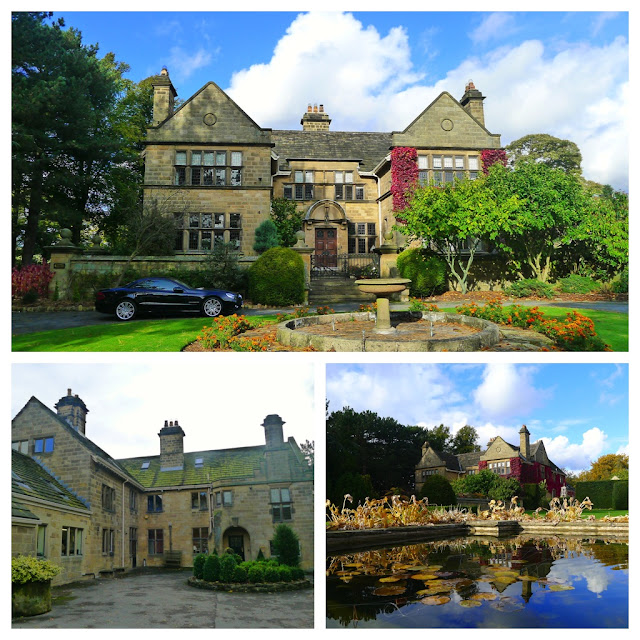 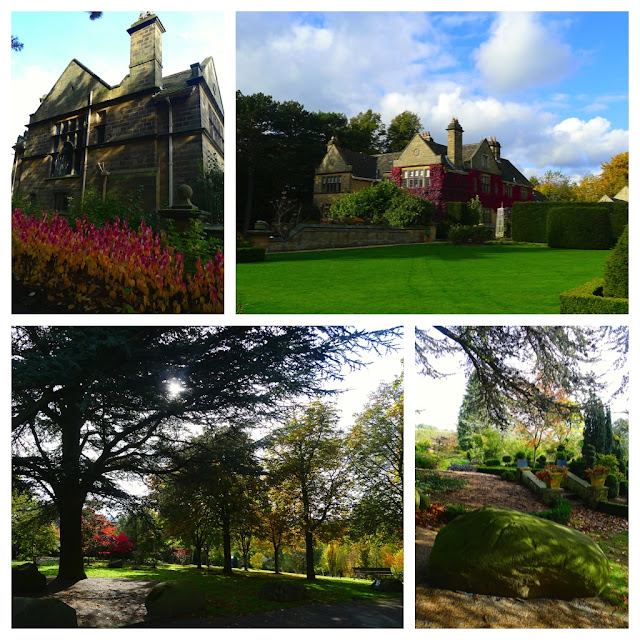 What they say (see here for Fischer’s website): ‘Head Chef Rupert Rowley’s cooking is always evolving. He combines classic favourites with more modern combinations and relies heavily on British produce in season including Derbyshire Lamb, Scottish Razor Clams, Cornish Shellfish and Yorkshire forced Rhubarb. The abundance of herbs and vegetables during the summer months at Baslow Hall and High Ashes Farm in Barlow supplement the Kitchen and create innovative dishes.’

The journey taking a little less time than expected, we first headed to the nearby ‘Rowley’s Restaurant & Bar’ (see here) that is co-owned by the Fischer’s and their Executive Chef, Rupert Rowley for a drink (we plan to go back one day for food.) 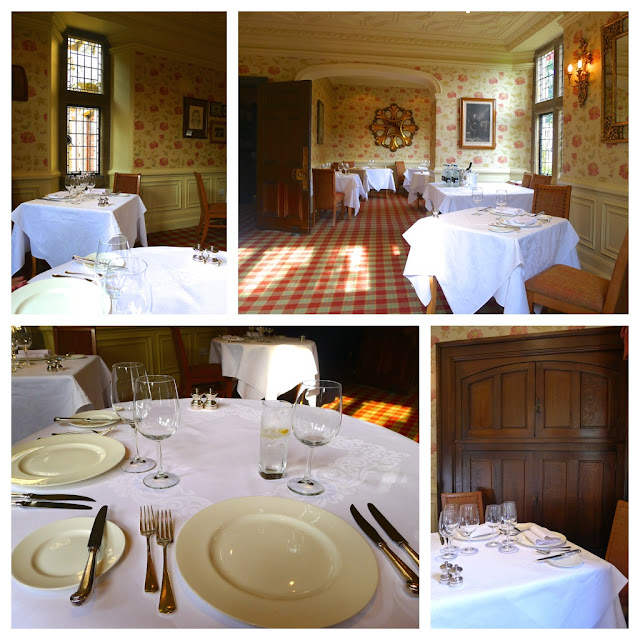 It was soon time to take the small journey up the road and through the impressive grounds of Fischer’s. It was a bright autumnal day and the gardens were  resplendent in their reds, yellows, browns and greens.

Over some spiced nuts and a drink in the reception room, we selected to eat from the lunch menu as opposed to the tasting menu, mainly because I wanted the Venison Suet Pudding. 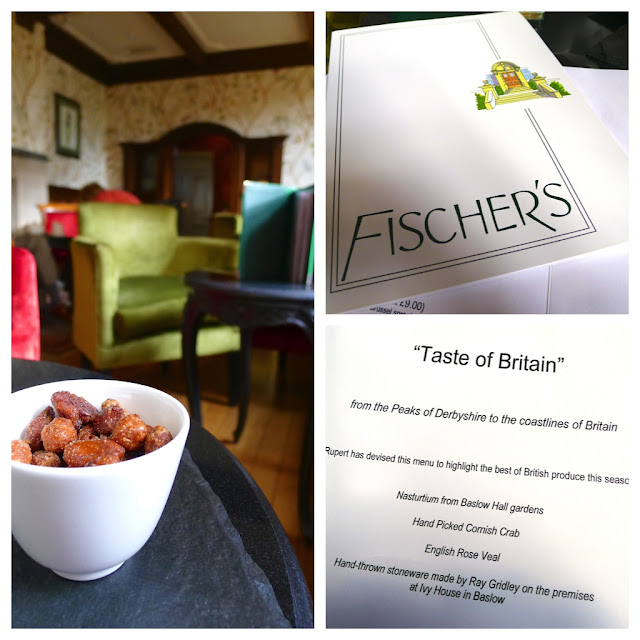 Breads: the day’s breads were swirled Sundried Tomato & Pesto rolls and a sliced Treacle and Stout loaf. Both were delicious, served warm and replenished when I greedily gobbled them up – an excellent start! 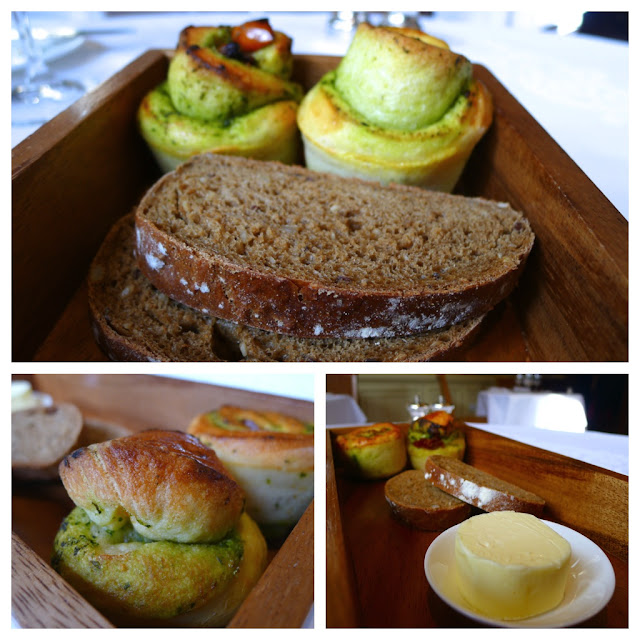 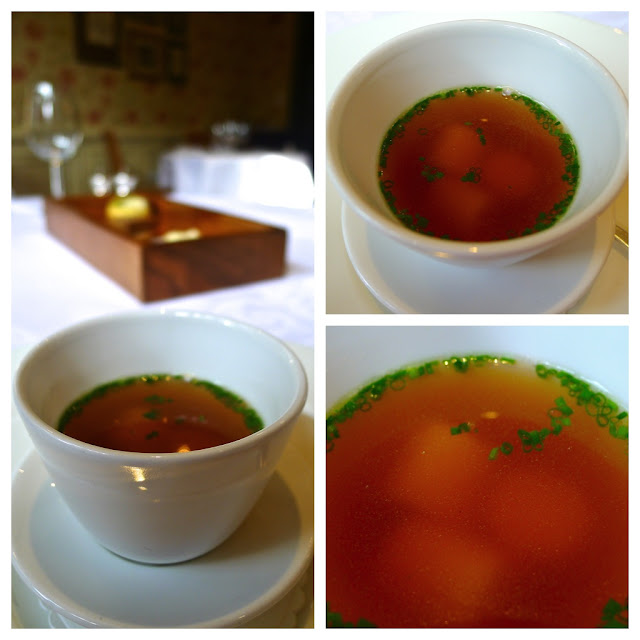 To start, my wife selected the Roast Pumpkin Mousse – Berkswell custard, Pedro Ximenez & grated truffle. The presentation was nothing short of splendid – the vibrant orange and greens with pops of red amaranth making it one of the prettiest plates of food I have seen in a while. It didn’t just look good, the fresh flavours also wowed, set off by the rich Pedro Ximenez jus and tittles of truffle. 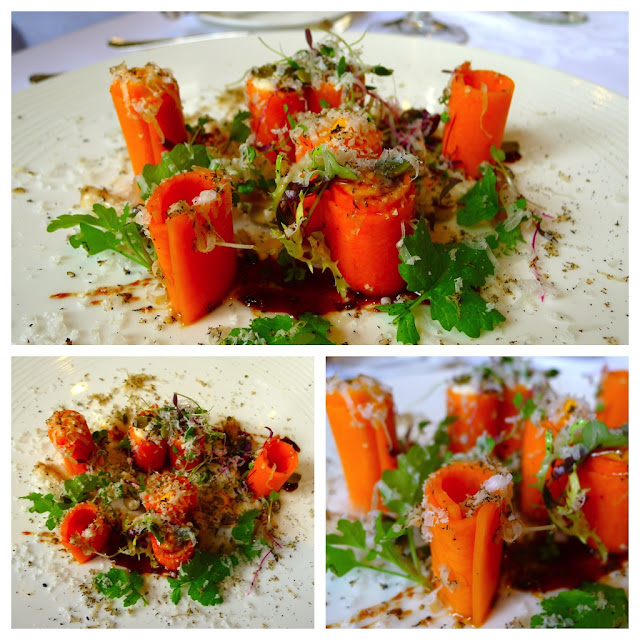 Nasturtium Cured Salmon – tartar, pickled kohlrabi & horseradish snow. My starter may not have had quite the same visual impact as my wife’s but the clean lines and vibrant colours matched the fresh flavours of the tartar, pickled kohlrabi and cucumber. The subtle horseradish snow and gentle cure on the salmon, working in perfect synergy whilst adding a lively twist to the dish. 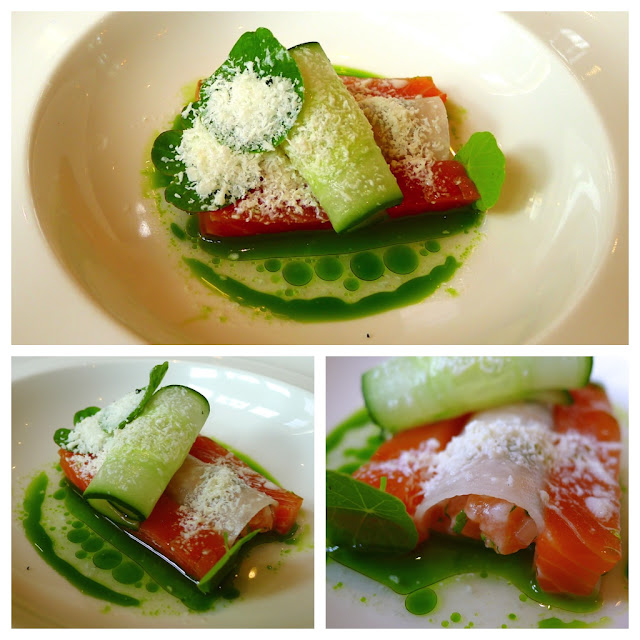 Blade of Derbyshire Beef – there was a fillet available for at a supplement but I think my wife chose well with the rich, robust and redolent blade, braised in red wine. Perfect pommes purée and roasted root vegetables completed the dish. 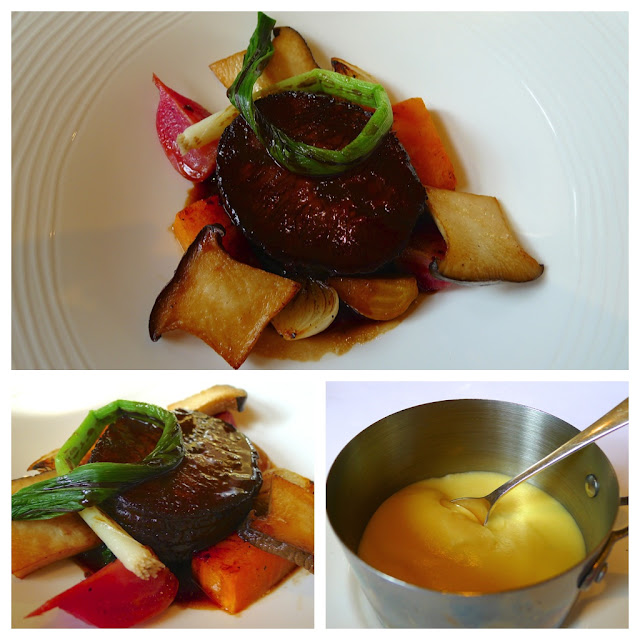 Venison Suet Pudding – as mentioned, the suet pudding was the main reason we opted for the set lunch menu as opposed to the tasting, unfortunately I found it a little dry inside and as such, it did not quite live up to expectation. I also found the sloe gin sauce a little harsh. 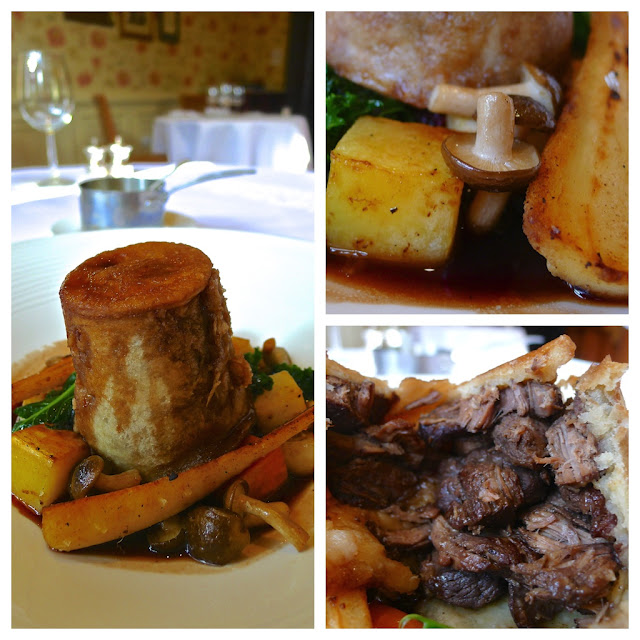 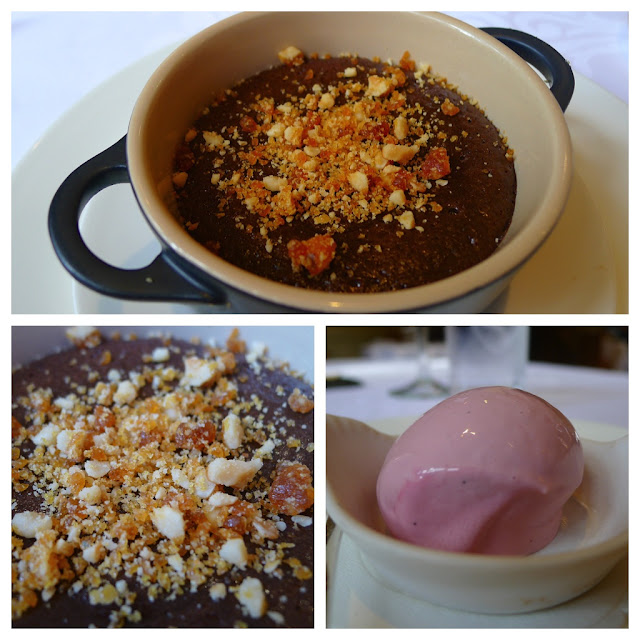 A selection of British Cheeses – served simply on a slate with celery, grapes and a fig and almond cake the selection consisted of: a fresh tasting Bosworth Ash; the cider washed Celtic Gold; creamy Cote Hill Blue and a delicious St Oswald that was similar to my favourite, Livarot. 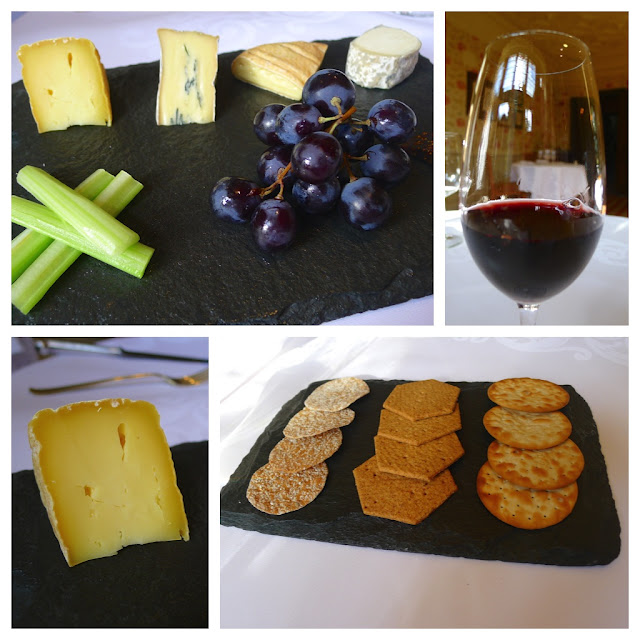 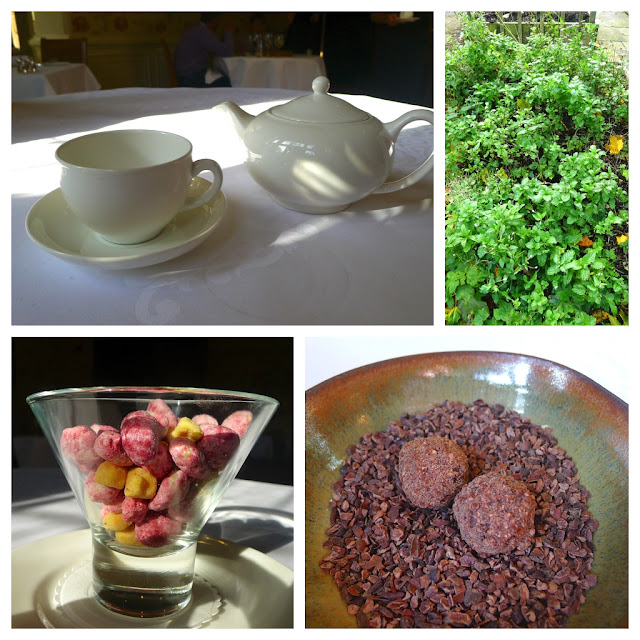 Food high points: the most memorable dishes were the King Edward Consommé and the Roast Pumpkin Mousse.

Food low points: nit-picking, I know, but for me the petit fours could be improved upon – they were nice enough but felt like they had been made well in advance. A macaron, some madeleines or other even a little take on the famous local Bakewell Tart would be a step in the right direction. 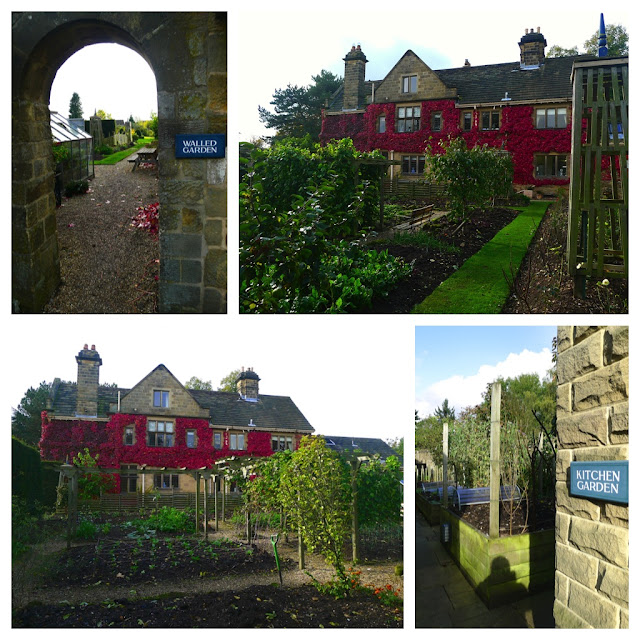 Décor / ambience: classical, formal and old fashioned without being stuffy or dated. A stroll around the grounds definitely adds to the whole experience.

Verdict (Would I return?): definitely (and hopefully we will not leave it quite so long this time.)