The good people behind Common and the Port Street Beer House have, in their own words, ‘decided to take a dip in the ‘burbs’ by opening ‘The Beagle’ beer house with dining room in Chorlton – for this, they deserve a big hand! 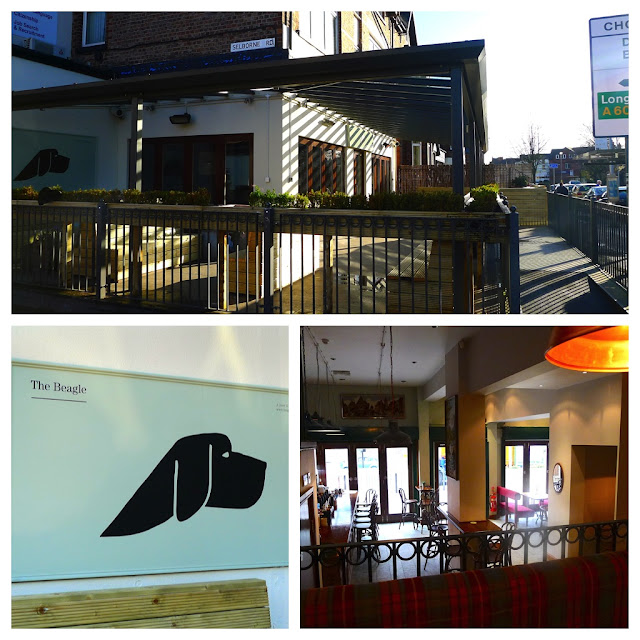 Taking obvious inspiration from Jeremy Beadle’s ‘Beadle’s About’, the  ‘Game for a laugh’ team behind the their Twitter moniker @beaglesabout probably expect the odd pun.

They have also been given a little hand with the menu by former Fat Duck chef and one half of the talented team at Aumbry, Laurence Tottingham. 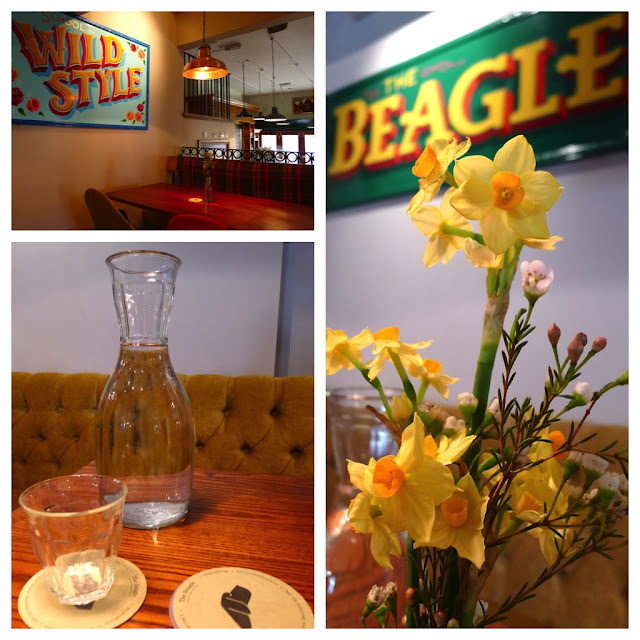 Inside it’s very much a Hipster’s haven. The soundtrack: a jazzy, bluesy mix of sixties and seventies ‘underground’ artists and a few modern throwbacks. The décor a mix of exposed brickwork and plaster in natural hues and wood grains with pops of colour coming from checked blankets, fabric chairs and comfy banquettes with fresh flowers and plenty of greenery from potted plants. I liked it. 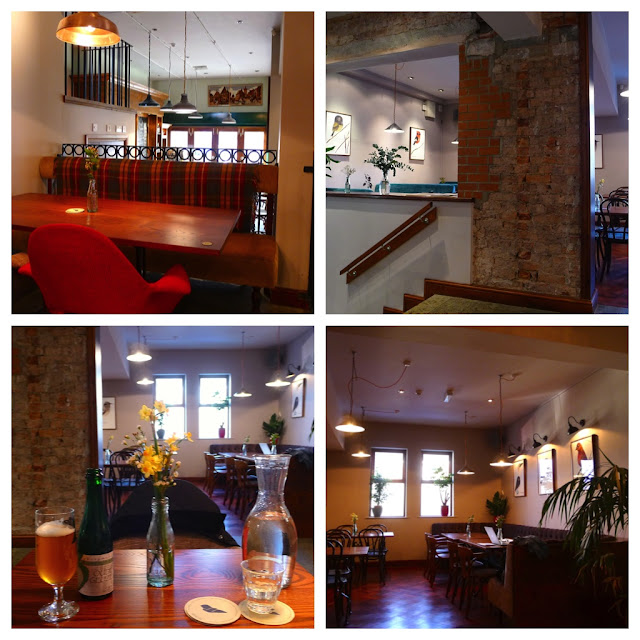 Beer isn’t really my thing so instead of joining the evening crowds, I visited on a quiet Friday lunchtime (they are open from 4pm Mon to Thurs and at lunchtimes Fri to Sun) but I couldn’t really visit a ‘beer house’ without sampling some of their wares. 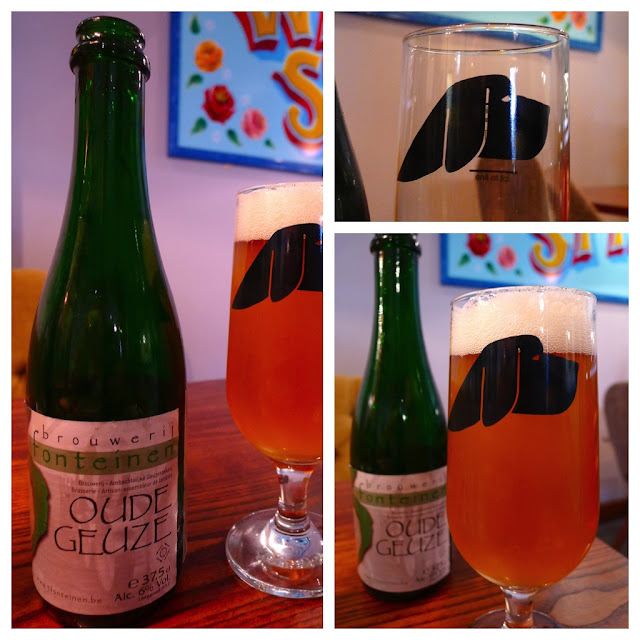 Since sampling a ‘Timmerman’s Tradition Blanche Lambicus’ at Aumbry (see here) I have gone on to experiment with and enjoy a few Lambic style brews; including a Boon and Cantillon Gueuze (both of which are sold at The Beagle). I found these a little too ‘extreme’ when compared to the more light and lemony Timmerman’s offering. 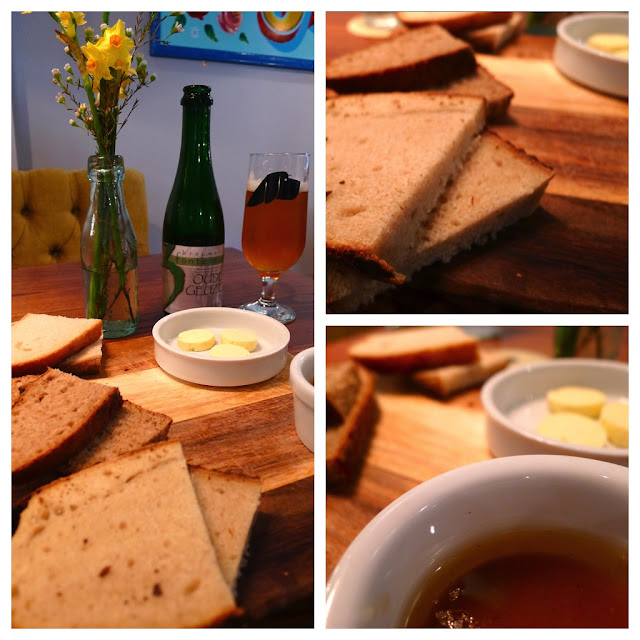 The staff at The Beagle are very knowledgeable about their beers and after a short discussion I was recommended the 3 Fonteinen. It proved to be a great choice – it poured a cloudy deep burnt orange and had a good sour kick which went well with most of the food I had ordered and also with the complimentary bread, butter and dripping. 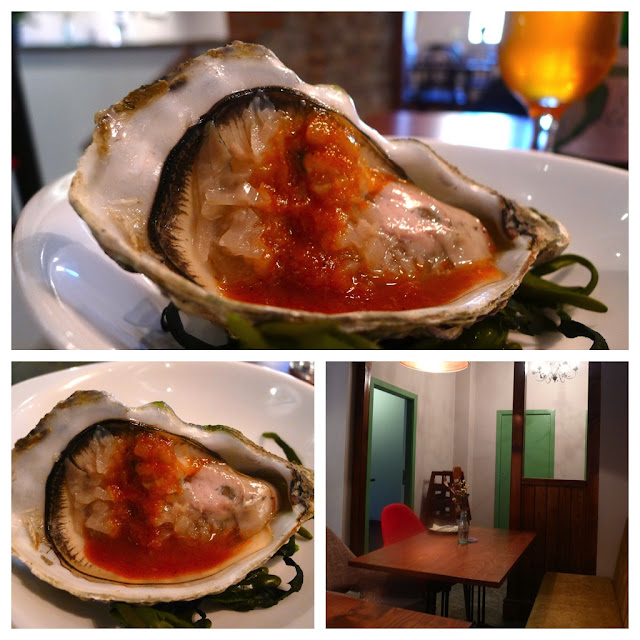 Oysters Mombassa - Poached oysters & African hot sauce. The oyster had not been removed from its muscle - a schoolboy error that resulted in a mouthful of the deliciously smoky and spicy ‘Mombasa sauce’ without the accompanying oyster. Both the sauce and the oyster were delicious but I’m sure it would have been more pleasurable to eat them together. 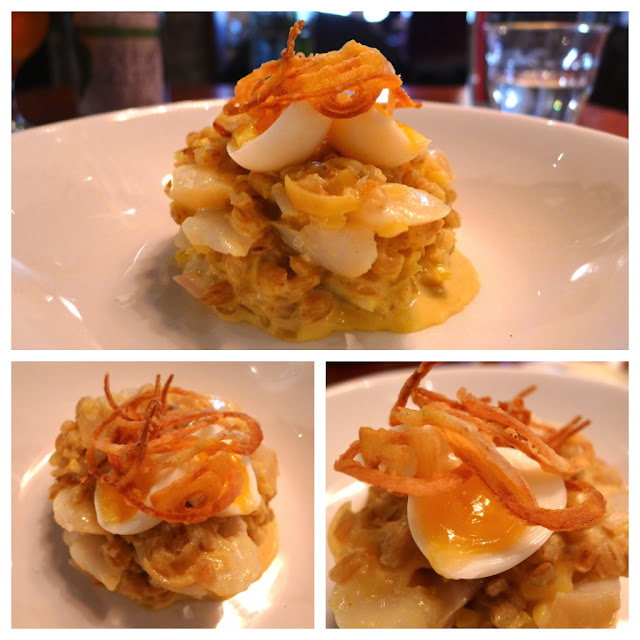 Pearl Barley Kedgeree - Crispy shallot rings. A huge fan of both pearl barley and kedgeree this dish jumped off the menu at me. It did not disappoint… I found it to be wonderfully creamy and smoky with a perfectly cooked quail’s egg, enhanced by the sweet crispy crunch of fried shallot rings. I would have liked the curry spice to be a little bolder perhaps, though on the plus side, I was glad that they had left out the sultanas. 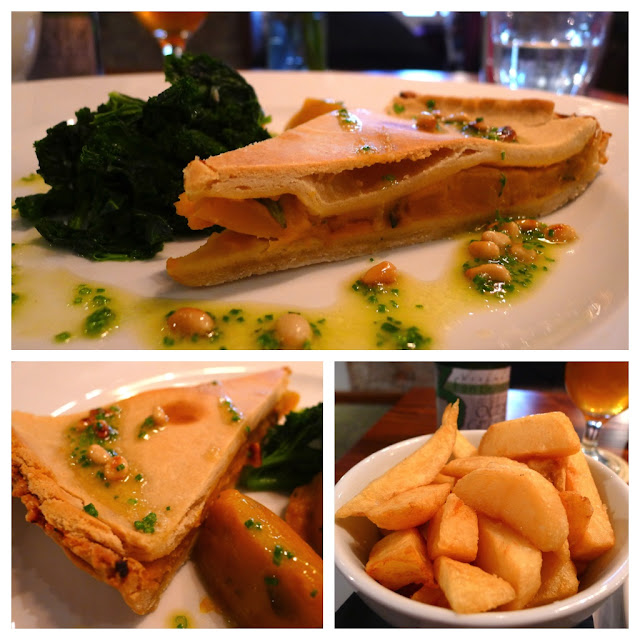 Despite having some tasty sounding meat dishes on the menu I selected the vegan offering of Pumpkin Pie with toasted pine nuts & rosemary. The pasty could have done with a little longer in the oven but the pumpkin filling was good. The kale accompaniment and pine nut vinaigrette were delicious.  Chips were great too.

Sussex Pond Pudding & Clotted Cream Ice Cream – This tasted good and was thoroughly enjoyable, however the Sussex Pond Pudding was sadly disappointing for a couple of reasons: firstly, the puddings traditionally contain a whole lemon and it was a shame to discover that this expected treat was not nestling inside. Secondly, mine had split as it was brought to the table… although this had not affected the flavour, I did feel cheated of the joy one feels when cutting into a pie or pudding.

Strangely I thought the sour notes of the Lambic beer would go best with the lemony dessert but I found it all a little ‘too much’. Perhaps something with more of a contrast would balance better? One thing for sure is with the myriad of beers, ales, stouts and porters available at The Beagle it could be fun finding the perfect pairing.