Nahm by David Thompson at The Metropolitan, Bangkok

When, despite having never set foot in France, Englishman, Marco Pierre White, was lauded with three stars from Michelin, I’m sure a few ‘sourcils’ were raised across the Channel at this ‘rosbif’ taking them on at their own game.

When, Australian, David Thompson, opened Nahm at London’s Halkin Hotel - it became the first Thai restaurant in the world to be awarded a Michelin star. Upon opening Nahm in Bangkok –many Thais were naturally dubious of just how ‘authentic’ this ‘Farang’s’ food could be. 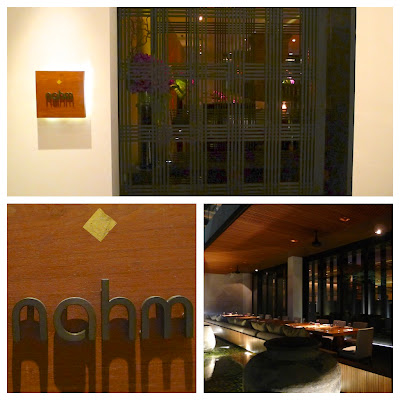 Whereas, Marco learnt his trade from French greats such as Raymond Blanc, Pierre Koffman and the Brothers Roux - Thompson learned from royal palace chefs and ‘old Thai women’, who, with a younger generation increasingly interested in westernised fast / snack food, are keen to share their knowledge before it is forgotten.

Years of travelling, living and working in Thailand and study of their food and its role in society and culture have resulted in David Thompson publishing books and becoming one of the world’s foremost authorities on Thai cuisine. The government even uses him as a consultant and to pass on his expertise to Thai chefs at the prestigious Suan Dusit College!

Celebrating our tenth anniversary with a second honeymoon, the main reason we selected Bangkok as a destination was to visit Nahm - largely, because of its inclusion on the S.Pellegrino list of the Top 50 Restaurants in the World, at number 50. 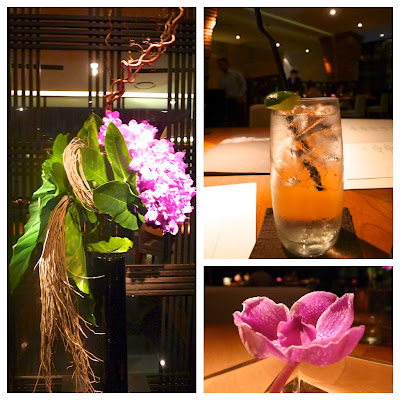 Expecting the meal to be an education as much as a dining experience, to say we were hoping for great things is a massive understatement - I was not disappointed.

With its red brick columns resembling the stepped chedis at the ancient Siamese city of Ayutthaya, gold leaf and Thai woven silk and dark lighting the décor was the perfect setting for a romantic meal.

Translating as ‘galloping horses’ our dinner got underway with an amuse bouche entitled Ma hor. Balanced on a ‘sour’ young pineapple base, these excellent little canapés featured a ‘sweet’ sticky mélange of minced pork, prawns and chicken simmered in palm sugar with peanuts, garlic and a topping of coriander and shards of red chilli. Sweet, sour, sticky goodness! 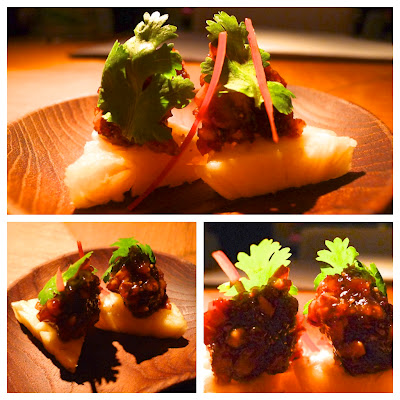 To get a traditional, balanced Thai style meal of sharing dishes, we decided to order from the ‘set menu’ which involved choosing a dish from each of the menu sections: Salad; Soup, Relish, Curry and Stir-fried, steamed and grilled. Before the main dishes arrived however we were served a series of Canapés. 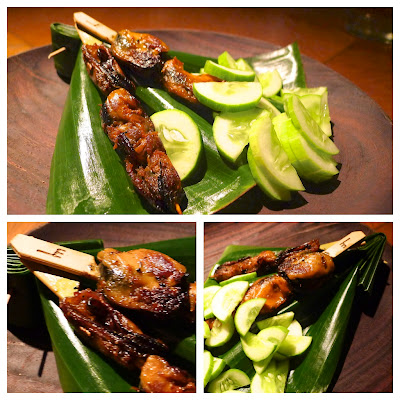 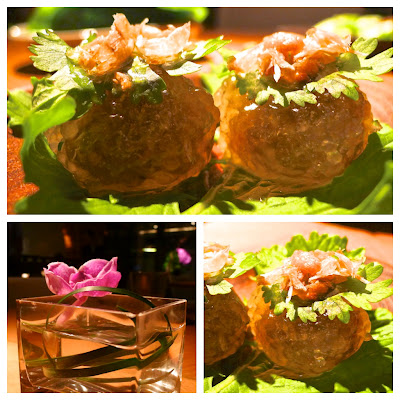 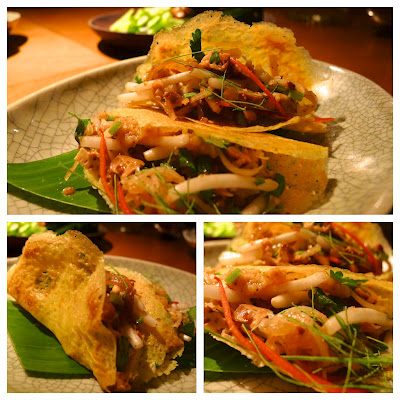 Prawn and coconut wafers with pickled ginger – the pancakes or ‘wafers’ were wonderfully light but it was the pickled gingers that I particularly enjoyed.

Spicy pork with mint, peanuts and crunchy rice on betel leaves – a dish reminiscent of the scene in Star Wars when Lord Vader throttles Admiral Motti! This, for me, was what I had been hoping for – ballsy food which grabbed you by the throat with its relentless spiciness. A delightful dish and quite unlike any I’ve ever been served in Thai restaurant at home. Wonderful textures and flavours: salty pork; dried chillies, mint; lemongrass; palm sugar; sweet onions with bitter, young, fresh betel leaves! (It’s worth checking out the Wikipedia page in Betel leaves – see here.) 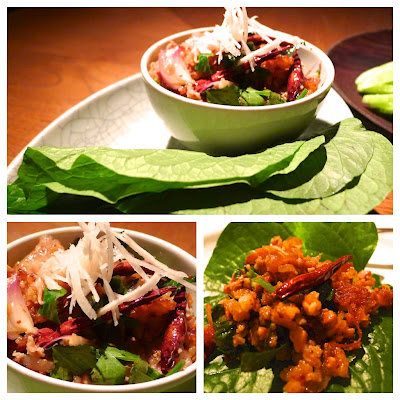 Placing a heap of the sticky crunchy mixture (ensuring to include some dried chilli) on a betel leaf, rolling it and popping them in my mouth and the ensuing explosion of flavours will, I’m sure, remain one of my most enduring and endearing food experiences ever. 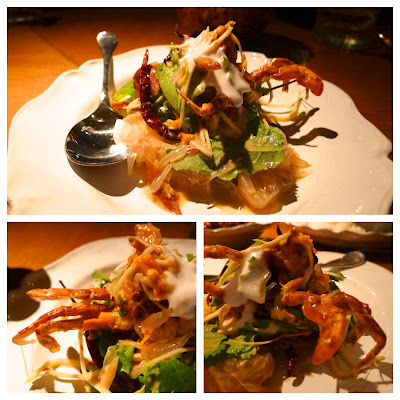 Salad: Salad of deep fried soft shell crab with pomelo, chillies and coriander – another dish liberally bejeweled with blistering red, fried chillies. This time, tempered by bursts of tartly sweet juice from the plumpest pomelo cells I have ever seen! 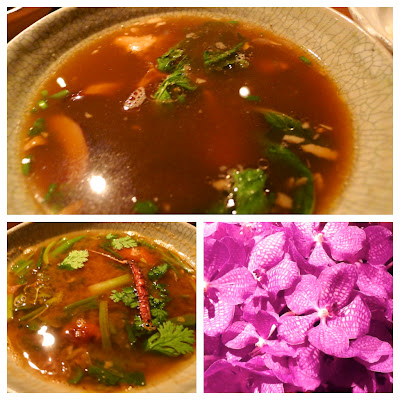 Soup: Clear soup of roast duck with Thai basil and young coconut – this was my wife’s favourite dish. More of an umami hit than most of the dishes with a terrific tropical undertone from the coconut water used in the broth. 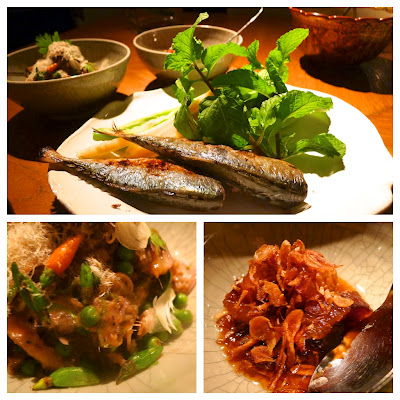 Relish: Fermented fish simmered with minced prawns and pork with chillies, galangal and green peppercorns served with fresh herbs – this dish came in three parts: the fermented fish, which had been simmered and lightly grilled were served on one plate with fresh herbs and vegetables; another plate featured the fiery mixture of fresh chillies, green peppercorns and galangal. The trio was completed by a bowl of sweet, sticky pork ‘relish’ with a liberal sprinkling of caramelised roasted garlic – a wonderful synergy of flavours. 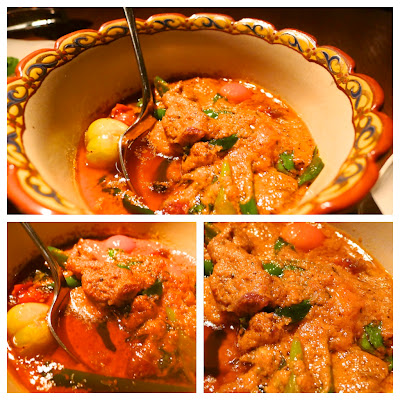 Curry: Grilled wagyu beef curry with sour tomatoes – most of Nahm’s ingredients are sourced fresh from the best markets and suppliers in the area. Certain ‘prime ingredients’ are supplied from outside, including the wondrous wagyu beef whose flavour stood up to the fiery red curry. The sour tomatoes added a burst of freshness balanced by salty chunks of pickled, fermented snakehead fish called ‘pla rah’. 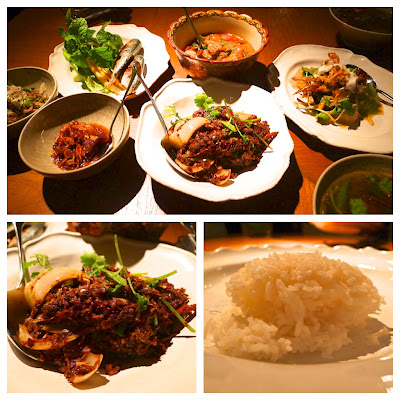 Stir-fried, steamed and grilled: Stir fried venison with cumin and onions – to my mind, this was the weakest dish on the menu and was outshone by the exceptional Jasmine Rice (adding to the natural Jasmine scent here, they apparently infuse the rice water overnight with Jasmine flowers). The expected rich flavour of the venison seemed lost amongst the spice. The dish did not seem to have the same depth and complexity as many of the others and it was not as texturally interesting. 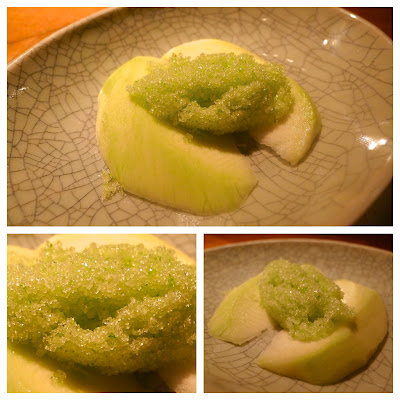 As a pre dessert we were served a ‘palate cleanser’ of Sour Mango with a mixture of sugar, salt and chilli – seemingly so simple yet so utterly scrumptious. 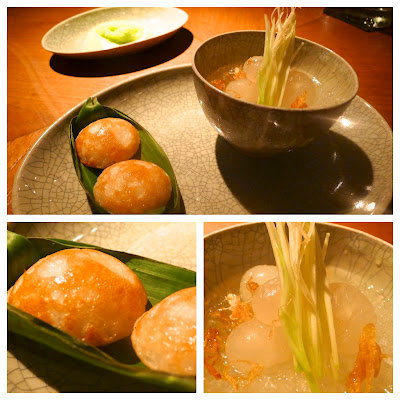 Lychees and salak in scented syrup with Thai cup cakes – I enjoyed the contract between the firm salak ‘snake fruit’ and the juicy lychees and the soft pillow-like Thai cup cakes. 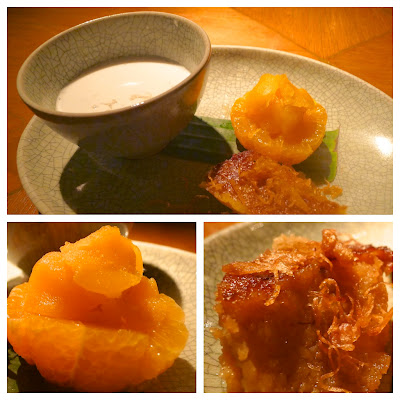 A top meal and experience well worthy of its place on the S.Pellegrino World’s 50 Best Restaurants list – it will be interesting to see where it places when the inaugural Asia’s 50 Best is published next year.