On my first full day in Bangkok, leaving my wife to soak up the rays at the hotel pool, I decided to hit the malls. I've had my eye on a new camera and I thought I'd check out how prices in Thailand compared to back home. Food never far from my mind, I also intended to snack my way around the malls' food halls.

MBK is one of Bangkok's largest and busiest malls. Although not as swanky as some of the newer ones, it’s home to the 'MBK Food Court' which my Lonely Planet guide described at 'the granddaddy of the genre'. Having arrived just before opening time at 10am, I waited with the throngs of locals eating food from clear plastic bags and paying their respects to the nearby shrine.

Overhead the city's BTS trains whizzed commuters and shoppers along, high above the traffic choked streets. Then, rather bizarrely, a dog that had been gaffer taped up trundled over towards me. (You read that right!) A quick glance did not quite reveal the purpose of the tape and I didn't investigate further as bowing security guards opened the doors and I joined the flow of people flooding through. 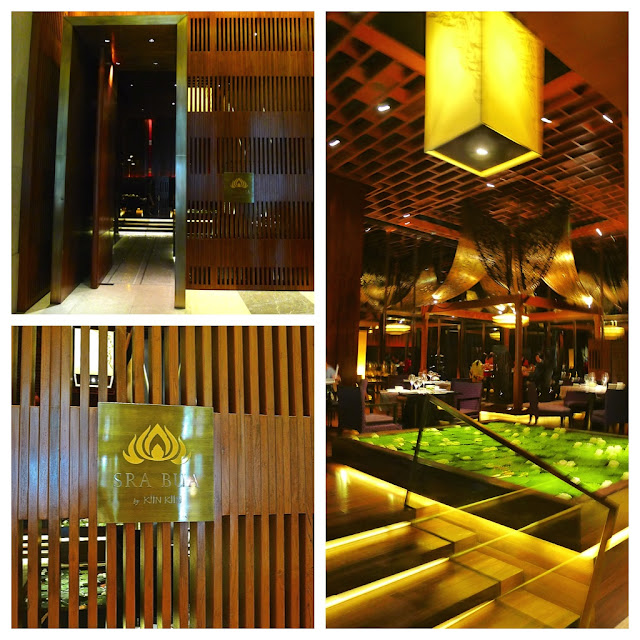 I took a walk around the department store area and then out to the other shops and indoor market area; many of the stalls were still opening and the food court was much the same. My advice would be to arrive later. I decided to walk to the newer, swisher Siam Paragon.

Siam Paragon is a vast, multi-floored behemoth of a shopping centre, mainly filled with 'high end' brands. You can even pick up a Lamborghini on the second floor. After a stroll around I discovered that the cameras I had been looking at were no cheaper than back home, so I headed to 'Gourmet Paradise' in the basement. 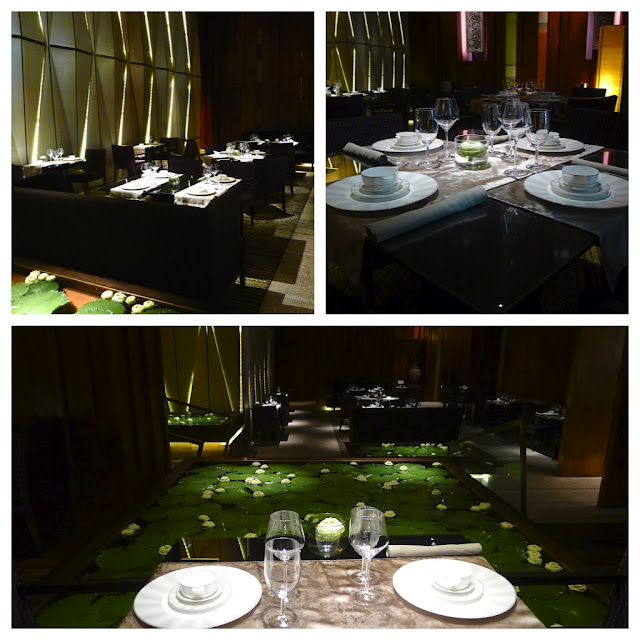 The Gourmet Paradise foot hall is vast - one section is essentially an indoor hawker centre where many of the owners of outside street side food stalls have decided to move away from the car fume infested streets to this rather more sanitary setting.

Obviously, much of the authenticity of experience is lost but each stall specialises in cooking one dish or a few dishes as the roadside vendors do - standards of food hygiene are meant to be better and the food just as good. 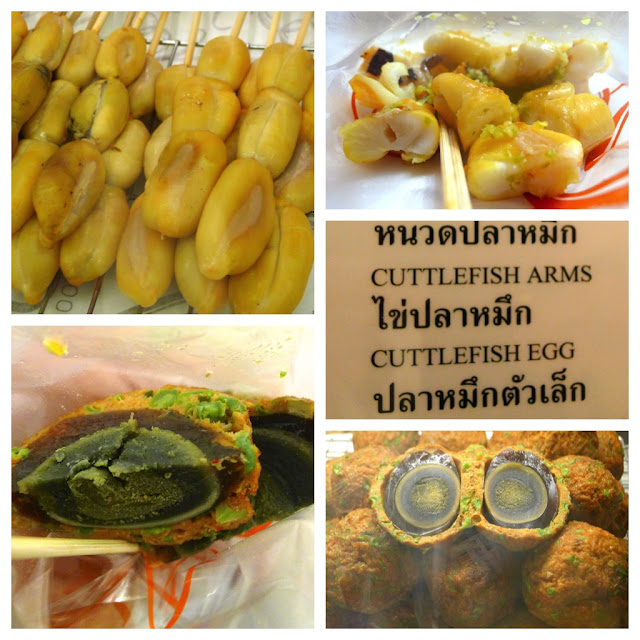 I had been hoping to try a few foods that I have not had before but most of what was on offer was the usual chicken rice, soup and dumpling dishes, Peking duck and alike. The only things I ended up eating were a kind of 'scotch egg' made with a century egg and various pieces of cuttlefish grilled on sticks over charcoal. These were delicious but, expecting a feast, I had only had a light breakfast.

I sat down to refer to my guidebooks, maps and notes from people who had made recommendations. It was this point that I struck gold when I realised that the mall was directly next door to the Siam Kempinski Hotel which houses Sra Bua by Kiin Kiin. 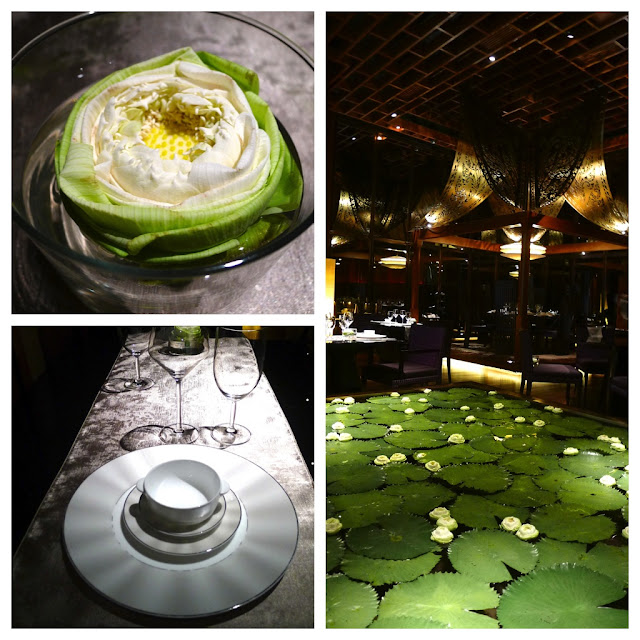 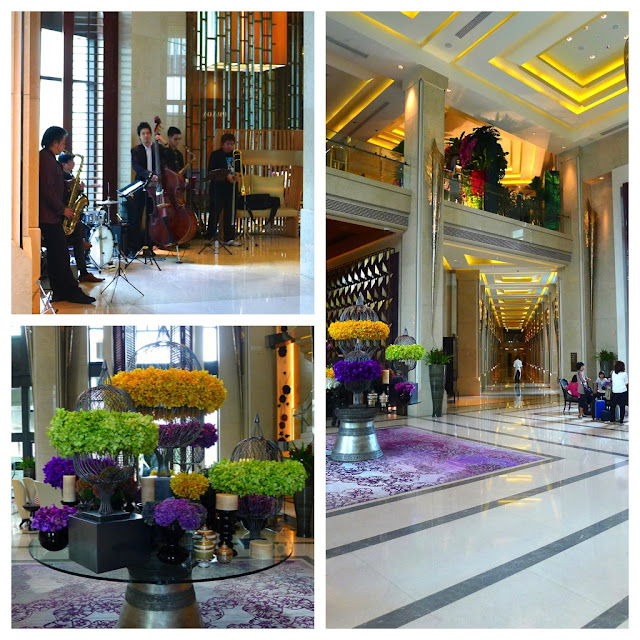 The hotel itself is phenomenal - very luxurious. I especially loved the live jazz quintet playing in the cathedral like foyer.

Looking a mess in my faded linen shirt and trouser combo which I had reserved for sweaty walks about town and clutching a few plastic bags full of 'tat' (a cushion, a grenade shaped ice cube mould and some seaweed snacks to take back for my wife), I was overjoyed that the restaurant did not turn me away. In fact, they were very welcoming and service throughout the meal remained faultless. 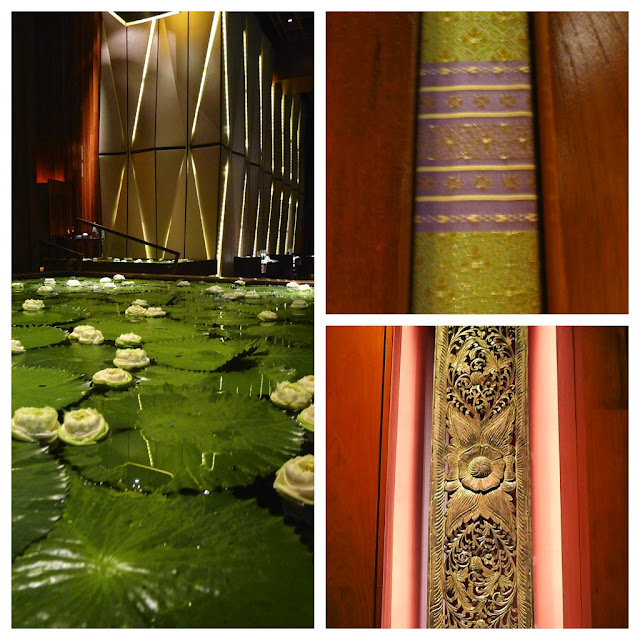 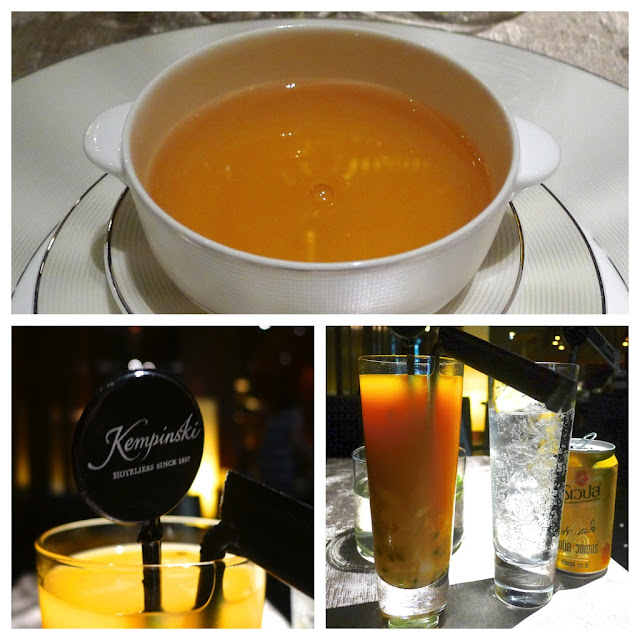 As soon as I was seated, I was served a Pandan Leaf & Lemongrass Welcome Drink. Served just chilled, it was cooling and, indeed, welcoming – the aromatic Pandan leaf transporting me back to my holiday in Bali. I also had a Passion Lychee ‘mocktail’ – a perfect combination of fresh Lychee and Passion Fruit juices. 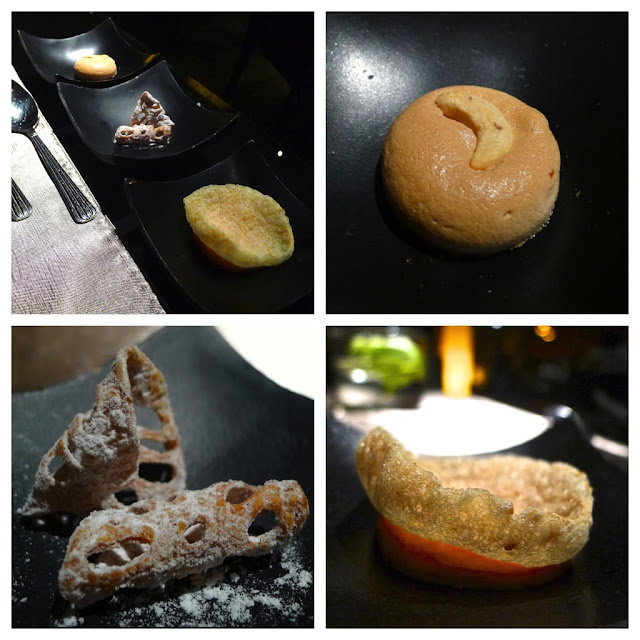 Next up came, ‘The Nibblings’ – a Spicy Roasted Cashew Nut Meringue; Kaffir Lime Scented Lotus Root and a Prawn Cracker with Chilli Tomato Dip. All were beautiful… I could easily have eaten a bowl of each! 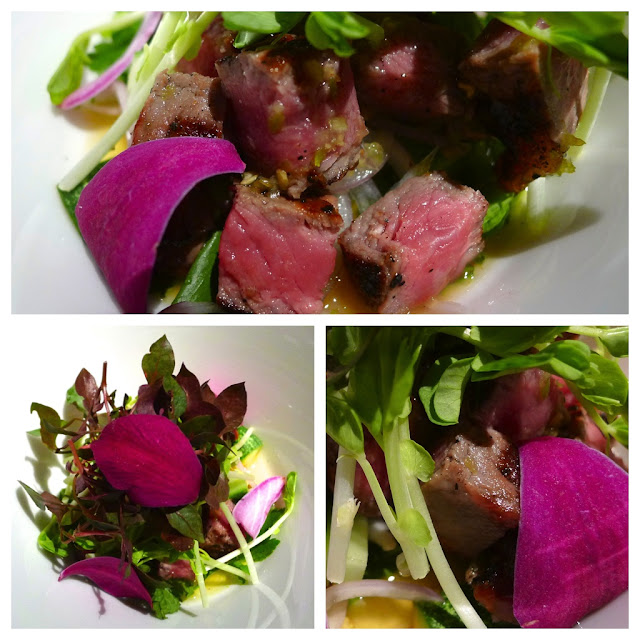 To start, I chose the Wagyu Beef Salad with Water Cress and Spicy Dressing – the ‘spicy’ Thai flavours in the dressing were very subtle but at least this allowed for the excellent beef to sing. The fragrant herbs and crisp fresh leaves 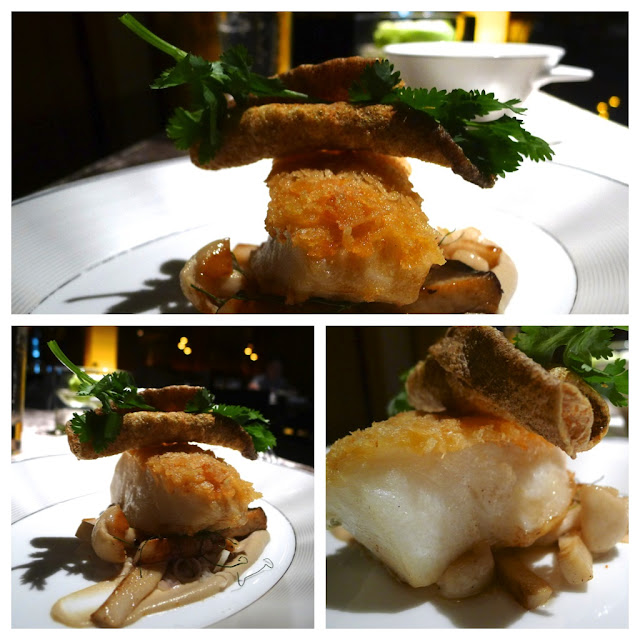 For my main, I had Panko Fried Fish in Tom Kha with Mushrooms and Crispy Skin – the ‘white fish’ (a little like hake) was wonderfully moist and meaty. The crunchy panko crust and coriander filled crispy fish skin ‘cigar’ added great texture as well as flavour. The selection of dinky mushrooms and the rice was also very good but the spicy galangal rich ‘Tom Kha’ was the real star – a woosh of heady Thai flavours! 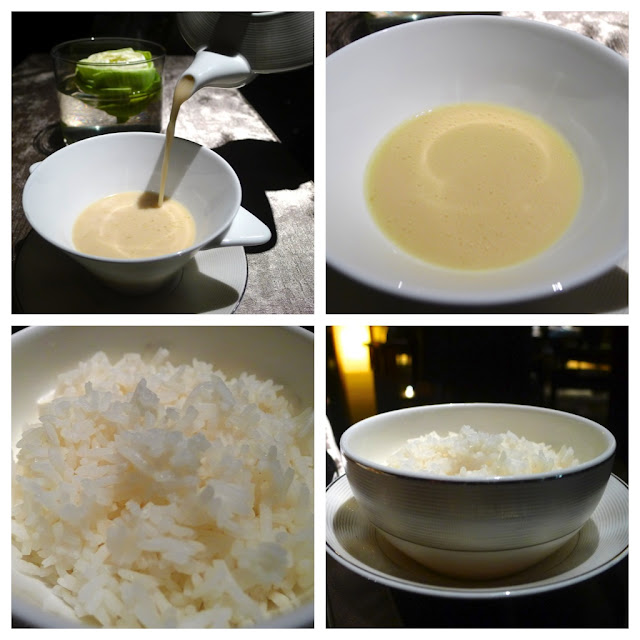 Passion Fruits Ice Cream with Condensed Milk and Kumquats – served in a Martini glass, I initially thought this rather small serving was an additional pre-dessert. It tasted great; especially the tartly sweet kumquat compote but I’d have certainly appreciated a larger serving. 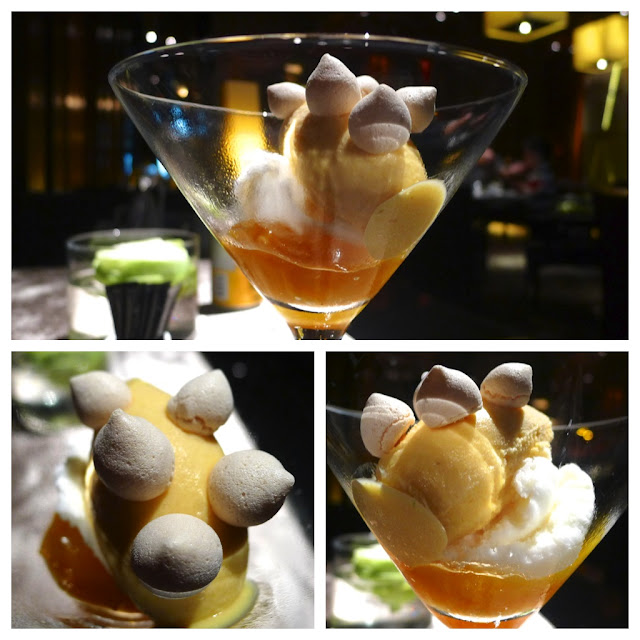 To go with my Green Tea, served in a fetching purple and gold embossed box, the Petit Fours consisted of four bonbons  – Coconut encrusted orange truffle, Marshmallow in a crisp cocoa dusted shell, ‘Malibu’ and ‘Snickers’. 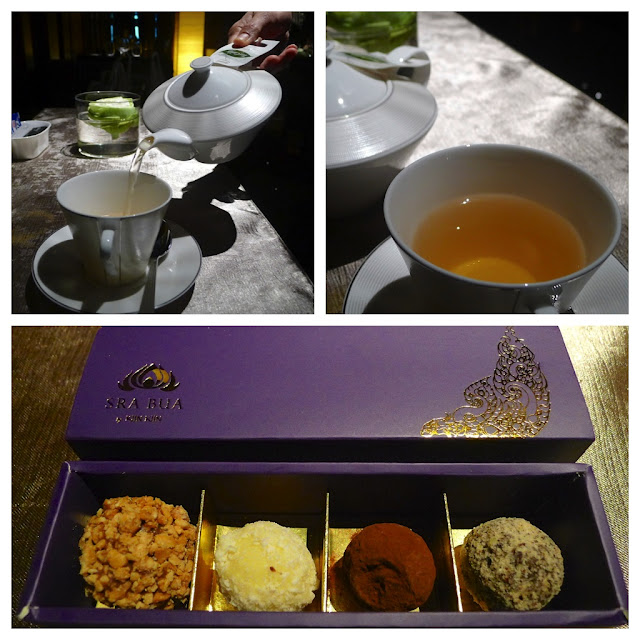 From what I have read and from what people have said to me Sra Bua by Kiin Kiin has been a little ‘inconsistent’. If this is the case, I must have been very lucky to catch them on a good day. So much so that at then end of the meal I made a booking to return with my wife for dinner later in the week.