Arriving in Bangkok to celebrate ten years of happy marriage to my beautiful wife, our adventures on the first night was an instant reminder of one of the most important ingredients for a long and happy union... compromise.

Wanting different things from an ideal second honeymoon, the destination itself had already been a compromise. My wife wanted somewhere with sunshine and water (a sea, lake or pool would do)... I wanted somewhere with food. Good food... and a restaurant with Michelin stars and or listings in the World's Top 50 List would be a good start.

Our first honeymoon involved staying at a five star Riu hotel in the Mexican tourist resort of Playa del Carmen. Returning there was our first idea and it seemed to fit my wife's criteria perfectly. As lovely as this was at the time, it no longer suited my foodist ideals. A compromise of Mexico City seemed the prefect solution... for it boasts two restaurants in the Top 50 list (compromise was starting to swing once again in my favour).

Checking the list I suddenly had a brainwave... What if we went to Bangkok via Singapore? We could visit Nahm (number 50) and my stepson's newly opened cocktail bar 'The Cufflink Club' - naturally, my wife could not resist a chance to see her first born. The dates were set, the flights were booked... now for accommodation.

For me, there was only ever one choice, 'The Metropolitan' a modern, swish and swanky boutique hotel that we booked through Mr and Mrs Smith. For my wife it had an idyllic palm tree lined pool and for me it also happened to be the hotel that housed Nahm.

Sitting poolside as the sun was setting on our first night, my wife was in her element... Totally relaxed having enjoyed the last couple of hours of sunshine. I was getting itchy feet... We were in a new city, which was waiting to be explored... There were restaurants and food stalls out there with fabulous Thai food, just waiting to be eaten. 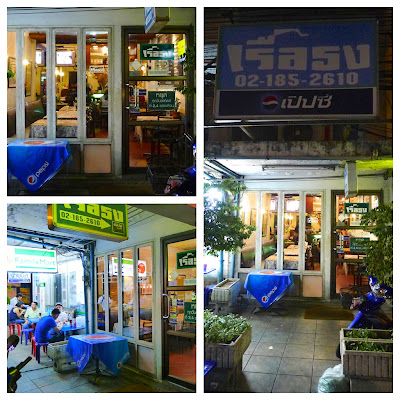 My wife suggested somewhere local. I suggested somewhere buzzing so we could take in the atmosphere and flavour of what was going to be our home for the next week. A taxi to Thong Lor... and, hopefully, a small, decades old family run restaurant that had been suggested to me via Twitter by @theskinnybib called ‘Ruea Thong’ (although this name only appears in Thai on the signage).

After slowly making away through Bangkok's perpetual traffic jam we arrived in Thong Lor - not knowing which way to go, we guessed and turned left. We walked for a couple of hundred metres so I could get what I thought were my bearings. We passed a few roadside vendors that sold 'things on sticks' as well as big bowls of rice, noodle and curry dishes and alike... these looked like a good back up plan if we failed to find the restaurant.

This was now looking more likely... We had walked for another few hundred yards and were now hot, tired, hungry and despondent. I got the distinct impression that this wasn't quite how my wife had planned the first night of our second honeymoon.

Then I spotted, what I hoped was a 'friendly western face' - it turned out to be the face of a rather inebriated old Australian fella who I assumed was a sex tourist (he looked the sort). However, not wanting to completely judge this book by its cover, coupled with the fact we were lost, I asked him for advice. 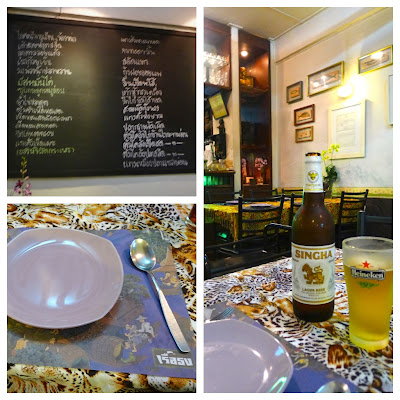 He took a look at my map; swayed a little, then slurred that we needed to get on the 'Sky Train' and head for, what he called, 'No Shit' (actually Mo Chit), head three stops in the direction he pointed. No probs... we like an adventure.

We climbed the stairs, bought our tickets, entered the barrier and waited on the platform... where I took the time to take another another look at the map. The train arrived and we stepped on... just as the doors were about to close, I grabbed my wife's arm and pulled her off... "I think it's back that way." I said, pointing at the direction we had just walked.

Fortunately, at that moment, another western face came up the stairs towards us. This time, it was a young (sober) American (not, according to my judgment, a sex tourist). He confirmed my hunch.

Just twenty minutes or so later we made it to the corner where the restaurant was supposed to be according to the Lonely Planet guide had 'no English sign' as was located 'next door to a Family Mart, near the corner of Soi Thong Lor 17'. 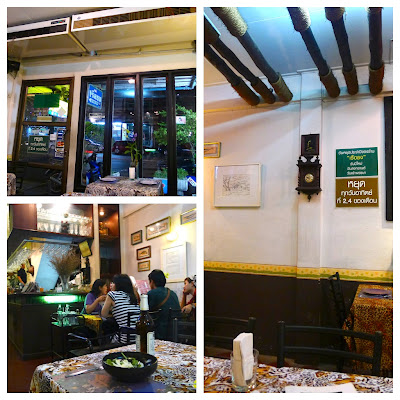 It was now just before closing time and the restaurant was occupied by just a couple of Thai chaps watching Arsenal vs QPR with the sound off and another group of locals. The waitress looked a little surprised to see two sorry looking, sweaty and tired tourists clutching their Lonely Planet guide.

We too, must have looked surprised, mainly from the strong smell of damp and the general ‘décor’; most strikingly featuring tiger print tablecloths (sarongs used as tabl’cloths), hand drawn nudes on the walls and a large blackboard menu, conveniently written in Thai. The guidebook had described the restaurant as 'homey'. We reminded ourselves that we hadn't come for the ambience... We had come to discover authentic, home cooked Thai cuisine... "What the locals eat." 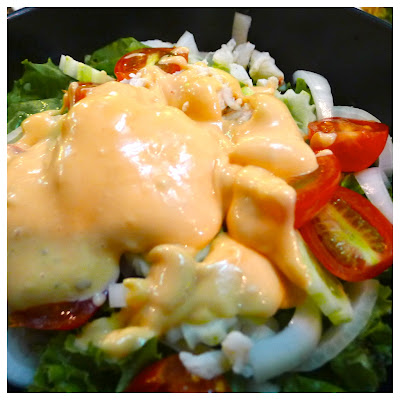 The first dish to arrive was a rather disappointing ‘Crab Salad’ with a generic seafood sauce... Looking underneath, we knew if we found crabsticks then we must be in the wrong place. Fortunately, we discovered proper crabmeat... lots of it and very all fresh. For 100 Baht (about £2) we didn't grumble! 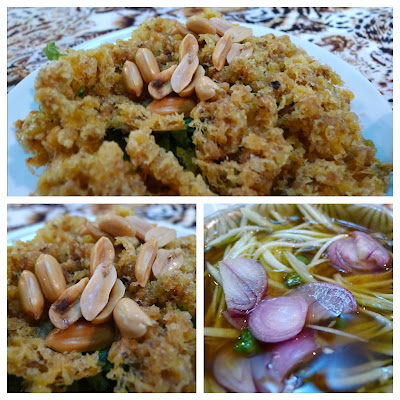 Next up, ‘Yum Pla Duke Foo’ or ‘Crispy Catfish’ topped with peanuts and an accompanying sour mango dip / dressing. The dish was certainly more crispy than fishy but the real star was the delightful sour mango sauce. 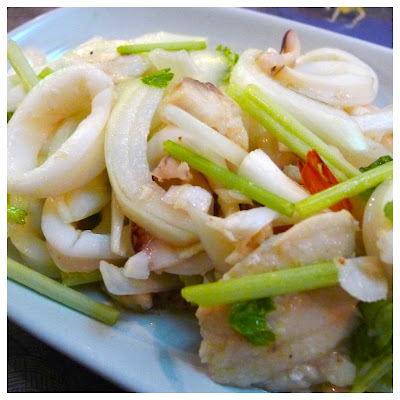 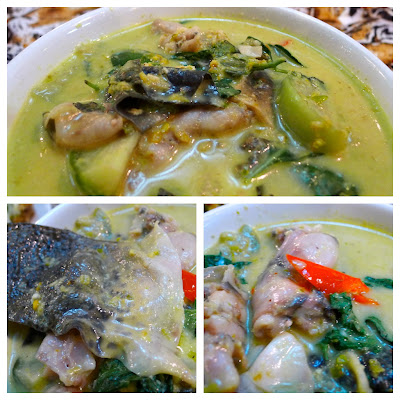 The final dish to arrive was the winner! ‘Kiew Whan Gob’ - a Green Curry containing frogs. Not just common ol’ frogs legs like in those French restaurants that try so desperately to appear all Gallic and authentic but the whole kit and kaboodle... froggie arms, froggie legs, froggie spines, froggie innards and their dapple green skins... all chopped up into tasty bite sized pieces.  Fab rice too! 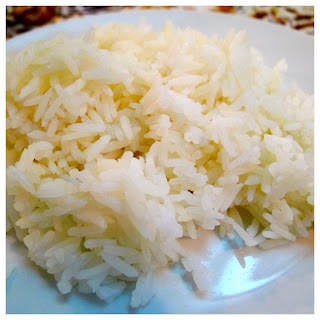 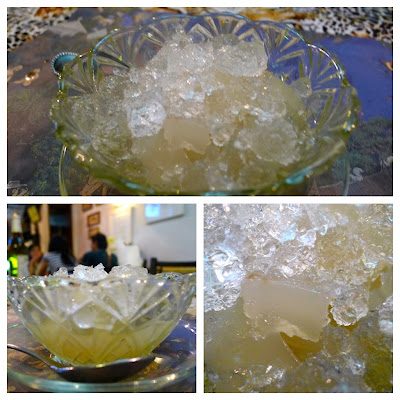 For dessert, ‘Toddy palm in syrup’ and ‘Mango with sweet shrimp dip’ – the toddy palm seeds served with crushed ice and syrup were deliciously sweet and refreshing. The mango was young, crisp and fibrous and was amazingly moreish with the tangy sweet shrimp dip. 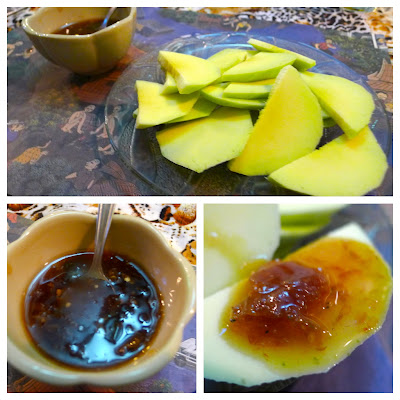