Being a teacher is not something I often bang on about in my blog as I generally like to keep my work and home life separate. Teaching is one of those jobs which it can be difficult to 'switch off' from; I am constantly thinking of ideas for lessons, ways to make lessons exciting and engaging or about social issues and relationships which may be effecting the learning and happiness of those in my care.

Most days, I am up at six and in school by seven. Like many teachers, I will often work through my lunch and break times and not leave school until at least five. When I get home I can then spend most of the evening planning and marking.

It can take a good five minutes to mark a literacy book properly; multiply this by 24, then add a set of Maths books, plus the books from at least one other subject and the result can easily equal a further four hours of work at home. Five, when you also include some planning for the next day. 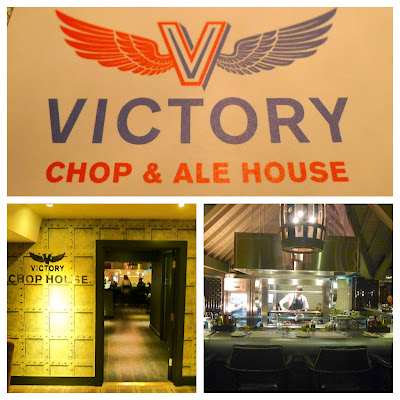 I know many chefs and business types that read my blog may be thinking, "Pah, 15 hours a day is nothing." and they may well be right. I have a lot of respect for the hours which people in the hospitality trade put in (especially when you consider the unsociable hours these include) and, having once worked in the City for Sedgwick Insurance, I also know that teachers are far from the only ones that work hard.

To be fair, I may have painted this picture a little less rosy than it could have been; for sure, there are some long days but there are also days when I manage to get away closer to three thirty and may not have any marking to do that day. Then of course there are the school holidays were the most I would probably do is spend a couple of days planning for the next term and maybe marking a set of test papers.

The week before this recent half term was one of those weeks! Going away, I had lots to do at home - the usual stuff: packing, ordering currency, booking restaurants and cleaning out my chickens. I also had lots to do at and for school. 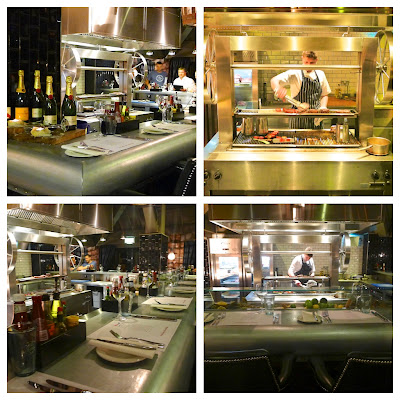 Not planning on taking my homework away with me, I had to prepare next half term's work early; mark several sets of test papers; make sure that general marking was up to date; attend a governors meeting; meet with junior colleagues as their 'performance management’ mentor and write a set of class reports.

Therefore, the night before we went away, we needed somewhere quick, easy and local to eat. (I rarely find time to cook properly at home these days; refuse to eat 'ready meals' and am not a huge fan of takeaways - I have eaten from the few that are good locally that many times that I am mostly bored of their menus; unless I get that particular hankering, say for fish and chips from Foster's.)

On my way into school one morning, I had stopped at my local Village Hotel (in Cheadle) to visit their Starbucks for a Grande Cappuccino with an extra shot (no sugar) and had noticed that they had completed work on their new restaurant the Victory Chop & Ale House. 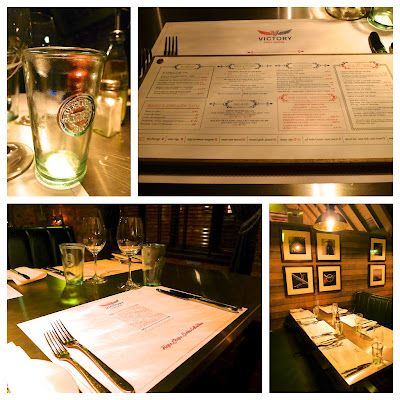 Eating at a Village Hotel is not something I'd generally consider. In fact, even when we have stayed at them (in Leeds, Birmingham and Bournemouth) I have never actually eaten in one.

However, this new Victory Chop & Ale House certainly looked swish; had a great looking menu (small and well balanced - something for everyone and a few stand out specials) and, most importantly, was local - great as we didn't really have the time to drive into town.

My wife looked less than convinced when I suggested the Village (it's somewhere we have driven by a thousand times before and I have never once suggested eating there). Once inside, we were both impressed - it had the feel of a 'proper restaurant' (not a 'hotel restaurant'). With its heavily American influenced menu and general ambience, it reminded us of a 'posh TGI Friday’s' or a TGI's "for grown ups" as I suggested. 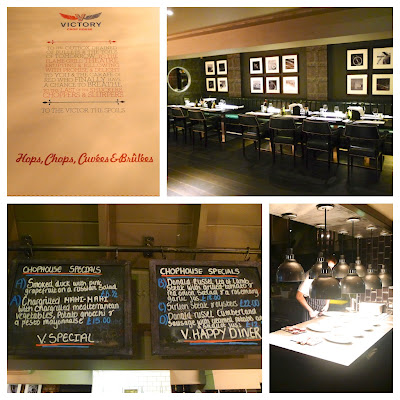 The greeting had been friendly, but not overly so in that faux American way. Our waitress was chatty and even sat down to take the order (something I know others have strong opinions on) but it came across as genuine. In my opinion, the absence of silly braces, badges and 'tat' in the restaurant along with the far superior menu make the similarity a little unfair - I'd much rather return here than a TGI's - a small Victory for the Chop & Ale House. 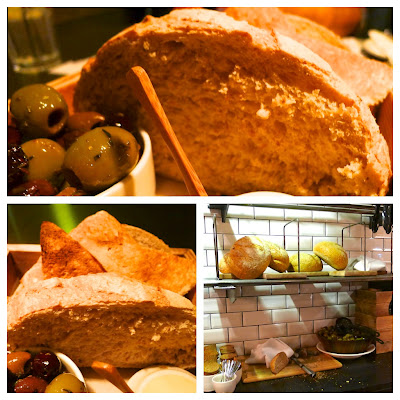 Bread & Olives - the olives were decent quality, a generous portion and the bread was freshly cut. A great start. 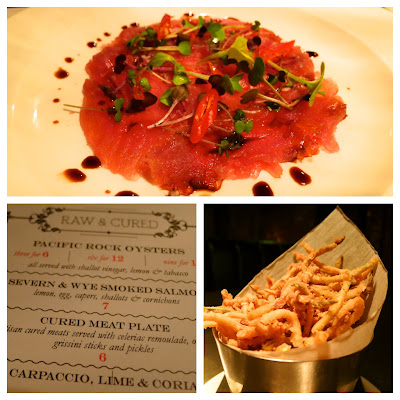 Tuna Carpaccio with Lime & Coriander - better if it had been cut a little thinner but is was well flavoured with a tasty dressing and, most importantly, served at a pleasing temperature not too chilled.

Crispy Parmesan Courgettes - my wife loved these little crispy snacks, finding them incredibly moreish. Personally, as a side and not a 'bar snack' I'd have liked them a little bigger so to get a greater sense of the 'courgette'. 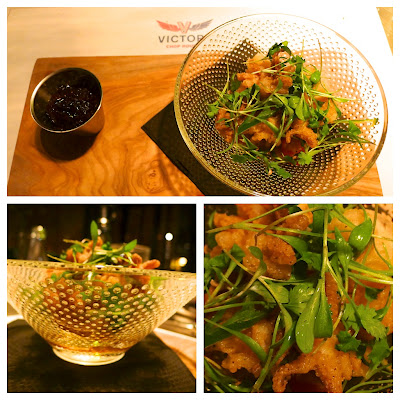 Salt & Pepper Squid with lime and chilli jam - this is a simple dish that is so easy to get wrong. This had been cooked well. I liked the balance of salt and pepper and did not find the chilli jam too sweet. Great effort! 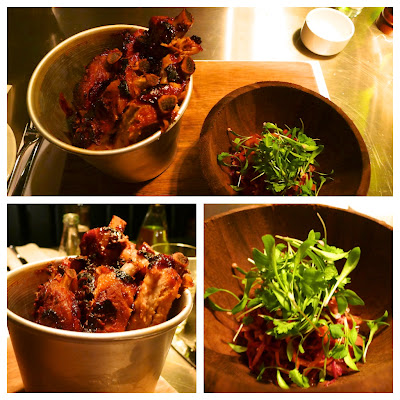 Bucket of BBQ ribs with Asian slaw and fries - I was intrigued by this dish enough to order it, as I was swayed by the almost primitive method of serving meat in a bucket but I'd had my concerns that the BBQ sauce would be that sickly sweet stuff from a jar and the meat would either be too dry and chewy or too fatty. I was overjoyed then to receive meaty ribs which literally fell from the bone (so much so that it was difficult to pick them up) and a deep, rich, smoky sauce. Tasty, messy, fun! 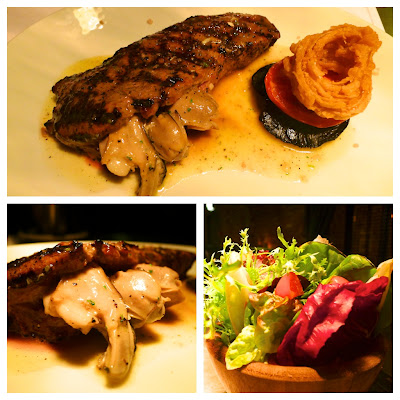 Sirloin Steak with Oysters (Carpetbag Steak / Carpetbagger) - my wife had planned to order the very keenly priced flat iron steak (which also features on their weekday set menu, 3 courses for £11.95) but was swayed when she saw this on the specials board. I was tempted by the raw oysters on the menu (but we had already ordered too much so will save them for next time) and it was interesting to see / taste these cooked ones paired with the steak - they added a pleasant saltiness and a smattering of indulgence. 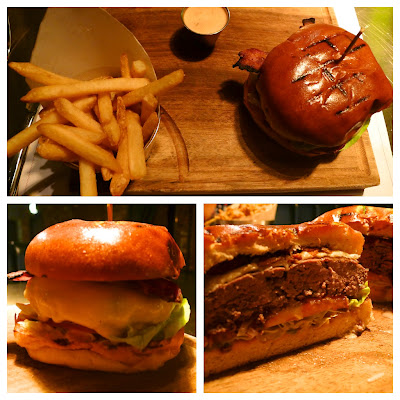 Chop House Burger with relish and fries - 250g beef pattie, served on a brioche bun with cured bacon, lettuce, tomato, red onion salsa and Swiss cheese. The pattie itself was well cooked, meaty and not too greasy. My one criticism is that I found the little bucket of thousand island dressing far too sweet - especially when paired with the already sweet combination of brioche, tomato and red onion salsa - at least it was served at the side and not slathered on top. 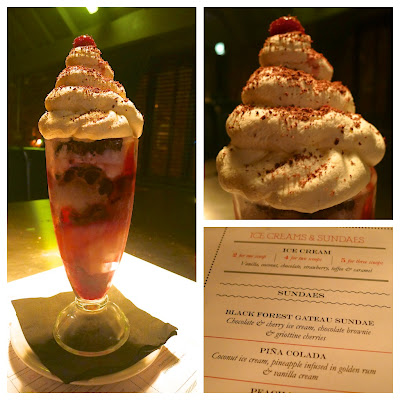 Black Forest Gateau Sundae - chocolate and cherry ice cream, chocolate brownie and boozy Griottine cherries. You can't go wrong with a sundae, especially when it is served impressively in a tall glass with two long spoons for sharing if, like us, you are a couple in love or with one spoon if you are a greedy.

I took a stroll around the restaurant to snap a few pics for the blog and to check out the impressive 'showpiece' open kitchen and grill pit. There seemed a great atmosphere and vibe - couples looked happy, families interacted with each other and groups of colleagues and friends seemed to be enjoying themselves. With good food and good vibes and a great location for us we will certainly be back - another victory for the Victory Chop & Ale House.

Guests at the hotel and the good people of Cheadle, Cheadle Hulme, Gatley, Bramhall, Heald Green and even as far as Stockport or Wythenshawe should check out the Victory Chop & Ale House for I think it serves some of the best food in the area.