Before I start my waffle: Please be aware that I visited Manchester House on their first busy Saturday night, having only been open to the public for a couple of days. It is perhaps unfair to post this early on but I do so in the hope that any 'negative' comments will be taken on board and as time goes on Manchester House will firmly establish itself as not only one of the best restaurants in the city but also in the UK. In my opinion, the first of these is already true and the potential is certainly there for the latter.

When I was growing up, Coronation Street’s resident businessman and ‘fat cat’ was a character called Mike Baldwin. Among other things, through one of his companies, Underworld, he sold “knickers”.

In ‘real life’ Manchester today, businessman and hospitality industry ‘fat cat’, Tim Bacon and his company, Living Ventures’ enterprises have often* been described as being “all fur coat and no knickers” (*a phrase used by me about Australasia and in the comments section of Marina O’Loughlin’s recent review of Artisan.) 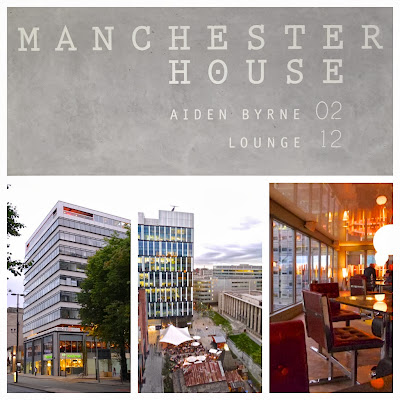 What Living Ventures have clearly been in need of is a ‘showpiece’ restaurant that has knickers – one where the food can be regarded as highly as the swish finish. With Mike Baldwin retired (and fictional), Mr. Bacon turned to Chef Aiden Byrne to provide him with the required “Reg Grundy’s”, and, hopefully, a Michelin star at Manchester House.

With a fit out costing in excess of £3 million, the décor and atmos in both the welcoming lounge and bar and the restaurant is without doubt sleek, slick and buzzing. But what I really wanted to find out is, would the food be akin to the quality of a pair of silky La Perla panties, or more your Primark pants? 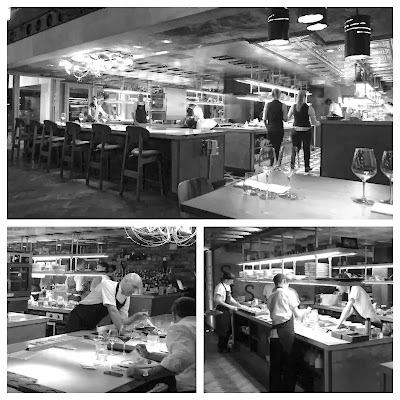 Before we do, a note on service.

I imagine people will take this in one of three ways – some will consider it overbearing; others will lap it up as the height of sophistication or, like us, as all a little bemusing, unnecessarily showy and a tad obsequious.

Initially, we were greeted by three friendly doorman (the first time I’ve known this at any ‘high end’ restaurant anywhere in the world). In the foyer, we also met the first of an army of ‘hosts’, one of whom joined us in the lift so as to press the button to the twelfth floor; engage us in idle chit chat about the speed of and reliability of lifts and to tell us to turn left – here she departed and tagged in the greeting party of three more smiling hosts. 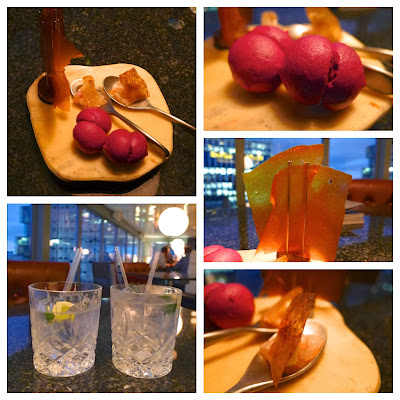 One led us to our seat, where apparently we would be served “free canapés”. Here we were introduced to our waitress.

The cocktail menu arrived – this we did find overwhelming. Each classic cocktail being given its own page complete with a detailed history of the drink… all interesting stuff, but having just driven into town, parked some way away and successfully negotiated the salvo of eager hosts we just wanted a drink not the complete history of cocktails. We gave up reading it and just ordered a couple of Goose & Tonics. 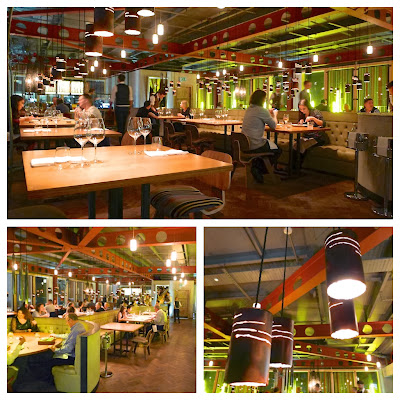 The drinks took some fifteen minutes to arrive. Long enough to take in the impressive views of the city and to be asked twice more if we would like a drink… yes we would. The free canapés arrived. They tasted good but the sticky surface of the beetroot and foie gras meringue and tuile left our hands all gooey.

Eventually the drinks arrived too (in gorgeous quality glassware) and were drunk. Then, when we finally were in need of a host or waitress… there was none to be found and we sat with empty glasses until it was time for our eight o’clock reservation. We had been there close to an hour. 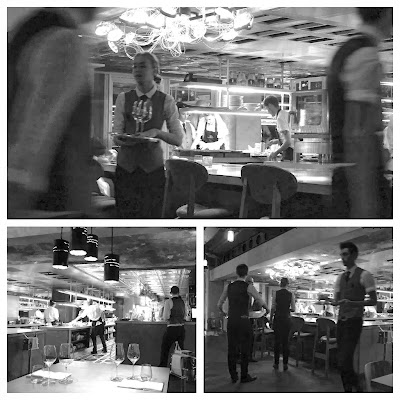 Later on, my wife’s bottle of wine sat teasingly on the bar for a good five minutes and I ordered a tonic before the pork that only arrived after the dessert when I requested one again. It’s early days of course but the bar service especially is going to need to be on greater form.

Smoked bacon & onion brioche – after positive tweets from those that went to the press / bloggers lunch, I was looking forward to this one. The bacon and onion brioche at The Ledbury (here) is possibly one of the tastiest breads I’ve ever eaten but this sadly disappointed. I did love the pea butter but I found the texture too ‘cakey’ and the bacon not intense enough for my taste. The ‘clever’ pea juice made with fancy bits of kitchen kit was insipid and watery… it’s now I expect the water in tinned peas to taste. 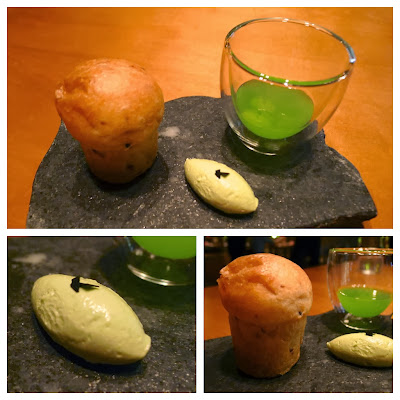 At this point, I was beginning to think about that mink and lack of smalls… but then things took a turn for the better. 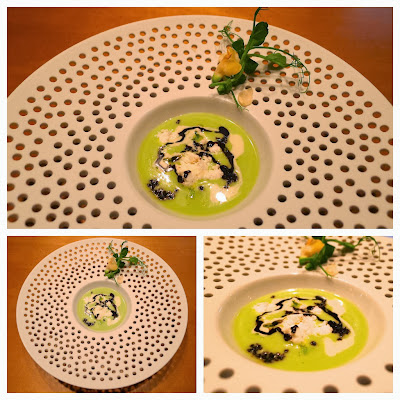 Chilled broad bean soup – a subtle broad bean soup, given a hearty zing with goat’s cheese. A delightfully fresh tasting dish, served in a striking bowl with holes (which made an appearance later). 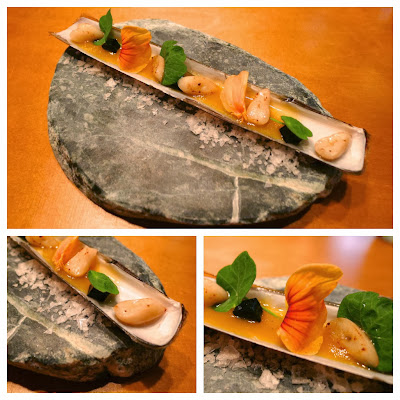 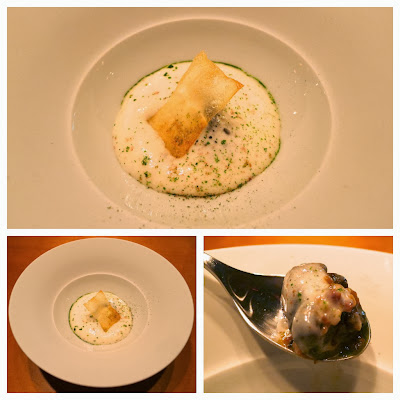 Braised snails, potato & parsley – this dish was the first one where I thought ‘Wow! This place really could win a Michelin star!” World class… a definite equal to the Fat Duck’s snail porridge (here). The pickled and braised snails were so plump and succulent enrobed in the potato foam and their perfect partner in parsley. 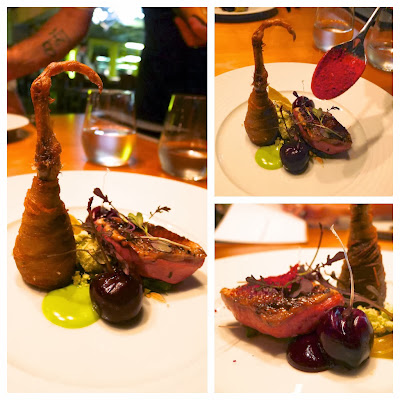 Pigeon, foie gras, palm sugar, cherries & pistachio – a classic flavour combination refined to exemplary standards… each component was cooked to perfection and showcased modern kitchen techniques and humour. This dish is already proving to be a firm favourite with many who have been lucky enough to taste it. 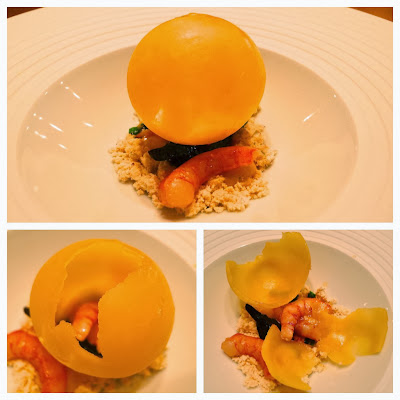 Prawn cocktail – I love passion fruit but often find it overpowers so I was a little concerned this would be a ‘style over substance’ dish, conceived more for the brief on Adien’s last winning appearance on the Great British Menu. These fears were unfounded; it did have that sharp tropical taste but I felt it balanced well and I particularly enjoyed the contrast in temperatures between the warm prawns and icy orb. 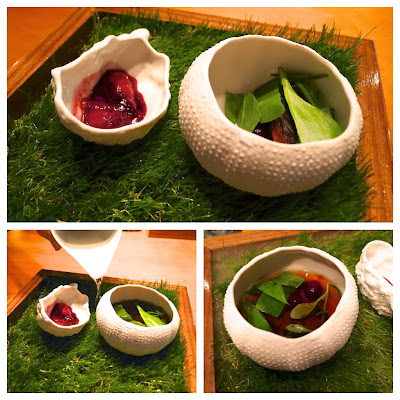 Beetroot fed oyster & oxtail – I saw Aiden demonstrate this dish at the recent Liverpool Food & Drink Festival and have a great photo of the billowing sea scented liquid nitrogen on my post (here). Sadly, on the night, mine failed to flourish and my wife’s only managed the weakest of wisps. Fortunately, this did not effect the flavour. I found the oxtail consommé to be exemplary and the oysters that are fed for two weeks on beetroot infused liquid are a stroke of genius. 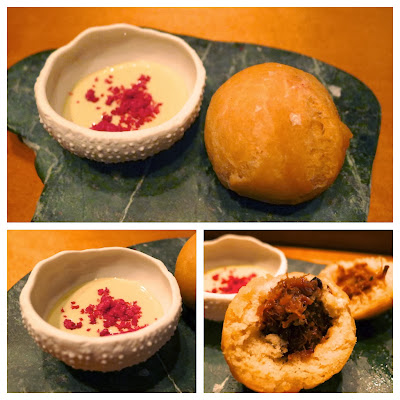 This is served with an oxtail ‘doughnut’ with a samphire and oyster emulsion with a beetroot crumb – dreamily good. 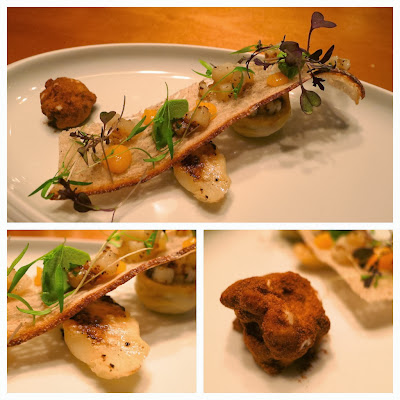 Potato & artichoke salad with truffle – on paper this sounded right up my alley. Each component was good but it did not all pull together for me… especially the ‘faux truffle’ – an iced Parmesan mouse with powdered cep. It wasn’t a bad dish but it had a few tough acts to follow and therefore did not wow; I’d suggest placing it before the snails on the menu. 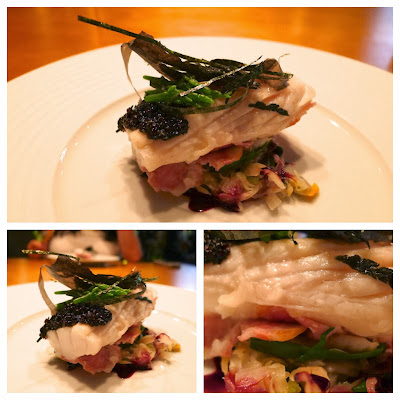 Turbot, morteaux & choucroute – this dish did wow! Another world class plate of food. The ‘king of fish’ had been wrapped in cabbage leaf and salted for some time, which imparted flavour and gave it the most delightful meaty texture. I love anything fermented (or pickled) and the choucroute (a French version of sauerkraut) complete with dinky pickled cockles gave a delightful sour kick, buoyed by the sea vegetables smoky Mortueau sausage. 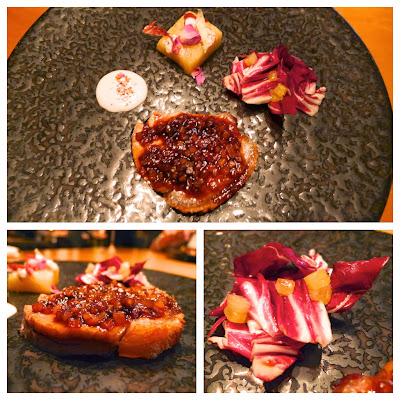 Pork cutlet with pineapple, rose & rosemary – this dish was not to my taste (or my wife’s) we both found the rose element overpowering, like potpourri. The pork too, was ‘lost’ amidst what I found to be an excess of pineapple. 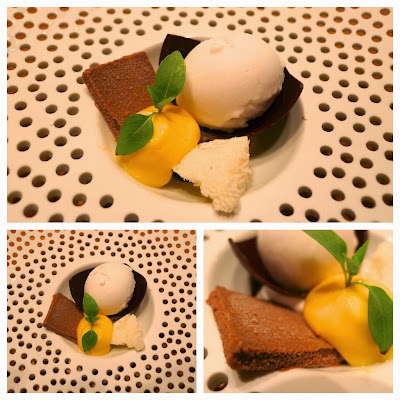 Szechuan, lychee & rose – I suggest this dish is renamed ‘Lychee, rose & Szechuan’. It was a lovely dish and the perfect palate cleansing ‘pre-dessert’ but by listing ‘Szechuan’ first, I expected it to take a more prominent role. 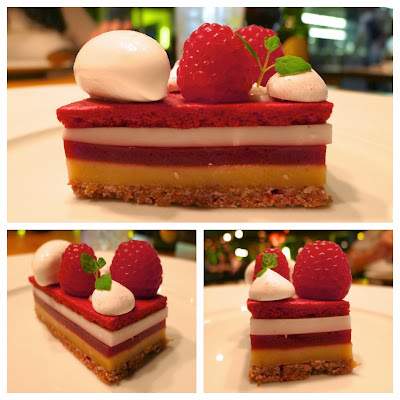 Manchester tart – I am ashamed to say that despite living in Manchester for over twelve years, I have as yet eaten a traditional Manchester tart. This one may not win over purists but I found it to be a fabulous thing… a stunning synergy of flavours and textures. 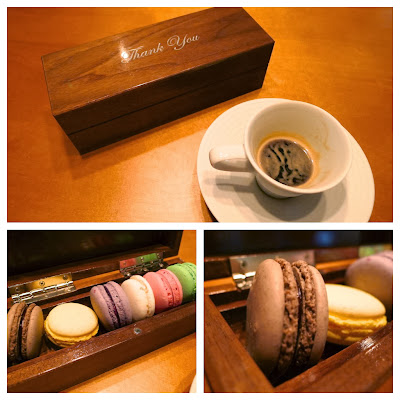 Coffee & macarons – I adore macarons and cannot think of a better way to end a meal than a selection of macarons and a ristretto to end a meal. On a personal note, may I suggest two of each flavour (I’m ok with less flavours) to save arguments? Eating half a macaron does not offer the same satisfaction, as it's the initial bite that I particularly enjoy.

So, do Living Ventures finally have a restaurant with knickers to accompany their fur coats? To my mind yes… Aiden Byrne has given them, and Manchester a pair of Underworld’s finest. I’m sure even the discerning and flashy Mike Baldwin would love Manchester House, thanks to the food and general buzz, so do I. For food this good, I can live with the farcical parade of hosts.