The French by Simon Rogan with ‘Dig The City’ & Roganic

Running from the 3rd to 11th August, Dig The City is an annual  ‘Urban Gardening Festival’ aimed at encouraging Manchester’s inhabitants to ‘grow their own’ and generally add a little more of what’s green to a city more famed for its Blues and Reds.

Aside from its gardening connotations the verb ‘dig’ has a hole load of meanings when you start dig a little deeper - you can dig for buried treasure, dig someone in the ribs, make snide little digs, or more likely, dig into your pocket for some small change. 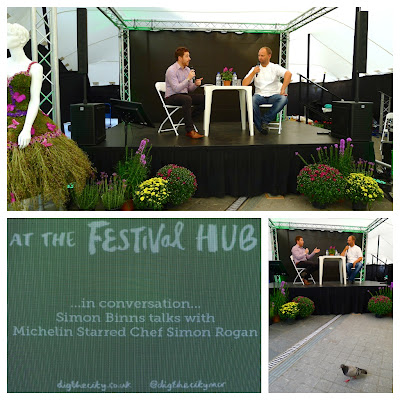 Choosing to open in digs with such an illustrious history as The Midland, Chef Simon Rogan obviously digs our city, having passed up numerous UK-wide opportunities in order to restore “The French” to a former glory.

As part of the week’s events, Chef Rogan took part in a “conversation” (aka interview) at the Festival Hub. Interviewer, Eat/Drink/Manchester’s Simon Binns, was the man charged with the task of digging a little deeper into Simon’s food philosophy. 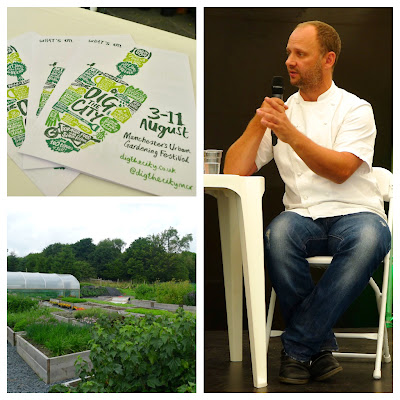 Simon spoke of his first job in a professional kitchen, at the age of 13, where his initial motivation was to earn a little pocket money. As he got older, attended catering college and started to work in better and better kitchens his love for cooking and passion for produce developed to the point where his motivation now came from a desire “to be the best.”

With two Michelin stars (and surely more on the way); an unprecedented double scoop at 2013’s Cateys (Industry Oscars) for ‘Best Chef Award’ and ‘Independent Restaurateur of the Year’ (to add to his 2005, ‘Newcomer Award’); a perfect 10/10 in the Good Food Guide (only equalled by The Fat Duck); 3 AA Rosettes at Rogan & Co and 5 at L’Enclume there is perhaps only Heston (temporarily) standing in his way of becoming, the undisputed ‘Best of British’ chefs. Simon revealed details of his latest developments: an as yet unrevealed exciting project in London, picking up from the recently closed, critically acclaimed, two-year “pop-up”, Roganic and another restaurant in Manchester, Mr Cooper’s House & Garden, also in The Midland.

At the turn of the 18th century, part of the site on which The Midland now stands once belonged to ‘Mr. Cooper’ – a ‘coachmaker’ known to kindly allow members of the public to use his gardens and tour the house. In homage, diners at the exciting new venture will be able to enjoy the ‘library’ ‘living room’ ‘scullery’ and other areas of the ‘house’ – including an internal garden, complete with trees and a ‘living wall’. Open on the 12th September bookings are now being taken - here. 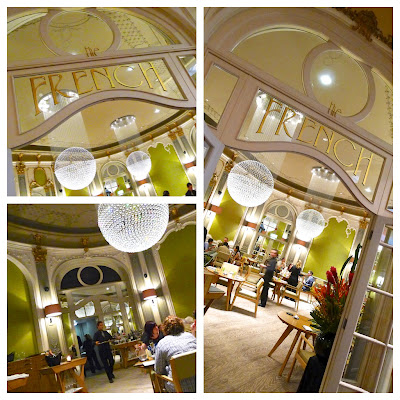 Despite all of these remarkable restaurants, projects and accolades, Simon told the audience gathered in Exchange Square, that he is “most proud” of his farm.

Less than five minutes away from L’Enclume in the Cambrian village of Cartmel, having been to the farm on a number of occasions, I can see why his pride is justified – it, over any of his kitchens, is the heart of all operations.

Dining at the “chef’s table” in Simon’s Aulis Research & Development Kitchen (see here), I was lucky enough to visit the early stages of the 23-acre farm not long after they had moved from their previous 7-acre plot. With more recent visits in March (here) and July (here), it astounds me how much they have achieved in just over a year.

The produce they are growing is exemplary. Simon spoke of how they are using an old-school “clamping” method for preserving and improving the taste of much of their harvest. The poly tunnels are fit to bursting; the orchard is taking shape; the chickens are happily free ranging and plans are afoot to renovate the ancient barn into a visitor’s centre.

One things that makes the farm so unique and central to supporting L’Enclume’s ethos is that its day to day running is overseen by chefs – notably: Dan Cox (Roux scholar and former head chef of Roux Parliament Square); Eddie Atwell (Roux finalist, and former soux chef at Loves, Birmingham) and Lucia Corbal (former soux chef at the Michelin starred Petersham Nurseries).

For “Dig The City”, Roganic Head Chef Andrew Tomlinson has joined forces with The French’s Head Chef Adam Reid and Simon to create a special menu featuring some new dishes and ‘the best of’ Roganic. 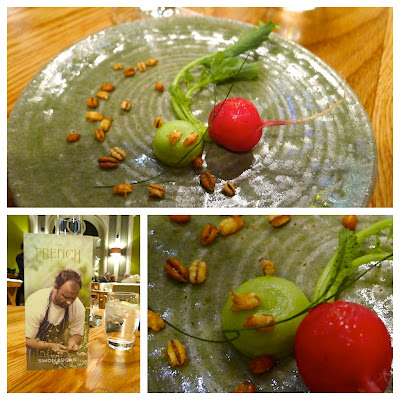 Radish, fennel custard, toasted spelt – from the off, the ‘dig the city’ ethos was perhaps not better represented than on the first plate to arrive - a whole radish complete with edible leaves, stem and tail-like root. Radishes are gratifyingly easy to grow at home in pots or containers (growing your own fennel custard and spelt may be a little more challenging… but is not inconceivable). 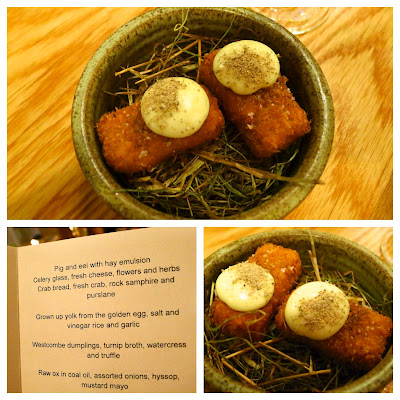 Pig and eel with hay emulsion – a Roganic stalwart, a wonderfully piggy flavour buoyed by the eel, hay and heady mushroom powder. 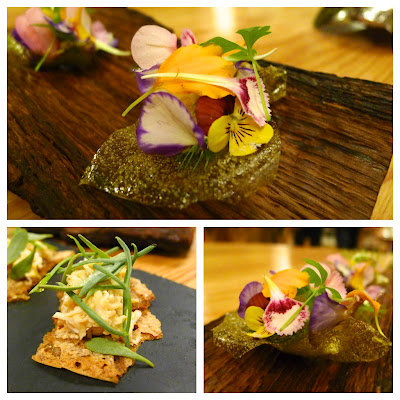 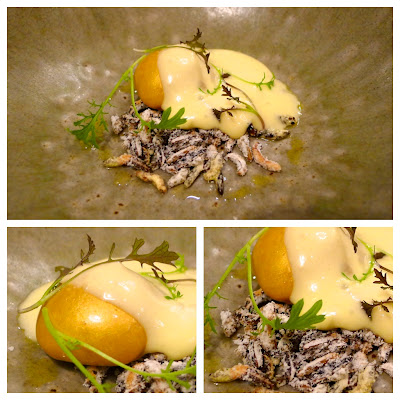 Grown up yolk from the golden egg, salt and vinegar rice & garlic – a similar dish, the ‘cod yolks’ at L’Enclume is one of my favourites on the current menu. The Roganic version with a chicken velouté set into the shimmering golden faux ‘yolk’ was equally impressive. 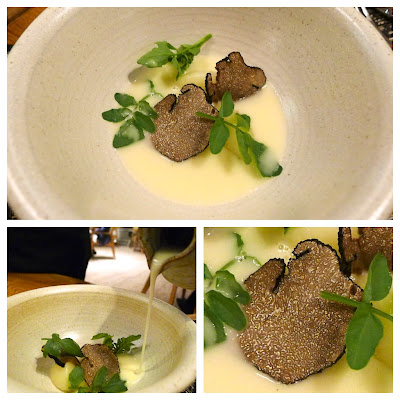 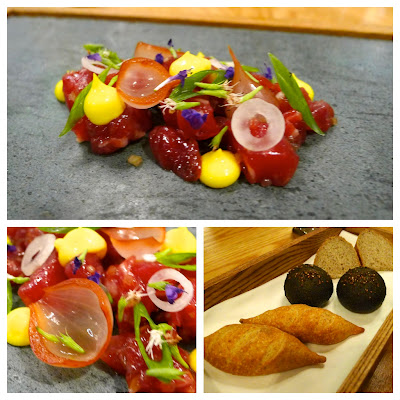 Raw ox in coal oil, assorted onions, hyssop & mustard mayo – the French’s usual ox in coal oil dish is typically the star of the menu; I am a big fan of the kohlrabi spheres and seeds. The ‘fig the city’ version was no less beautiful with the addition of exquisite hyssop flowers and delightfully tartly sweet pickled onions. 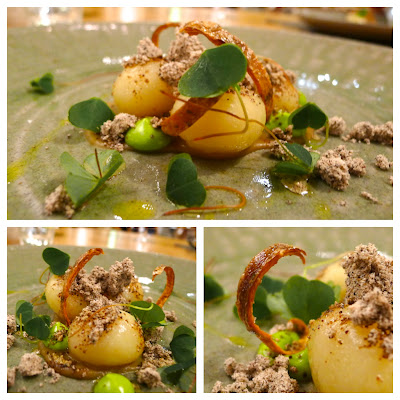 Heritage potatoes in onion ashes, lovage, shallot, wood sorrel – my favourite dish of the evening. The potatoes were deliciously creamy which contrasted with the crispy curls of skin. The dish was completed with earthy onion ashes, an intense lovage oil, lovage cream and magical citrusy bursts from the sorrel leaves. The use of leaves such as sorrel and oxalis (and vinegars) are examples of how Simon can get acidity into his food without using imported ingredients, such as lemons and limes. 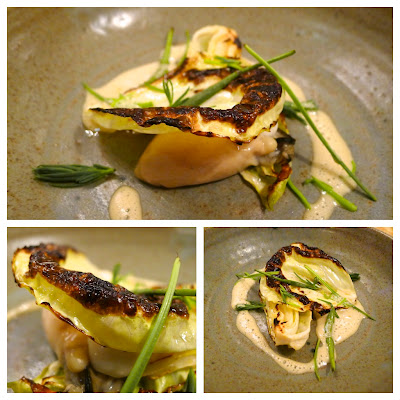 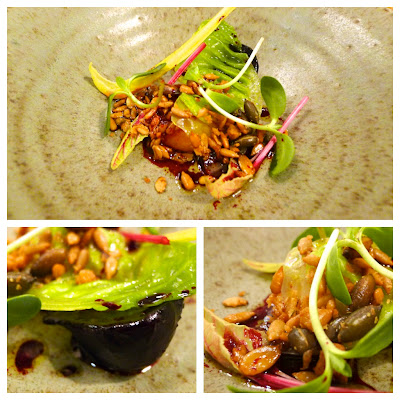 Salt baked beets, smoked yolk, baby gem & toasted seeds – having found the beetroot oil a little too sweet for my taste, this was the only dish that I was not 100% convinced by although I did very much enjoy the smoked yolk and toasted seed elements. 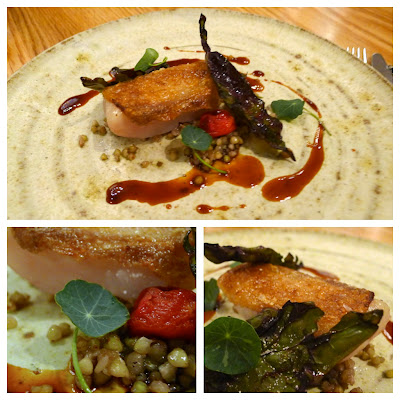 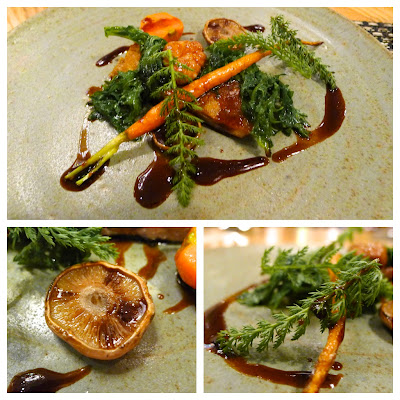 Yew Tree Herdwick Hogget flank, sweetbreads, carrots, wood blewits – due to Simon’s philosophy of only using British produce in his restaurants (something that he will not be ‘restricted’ by at Mr. Cooper’s), blewits are just one of the fantastic fungi that grow freely in the UK. The feathery conifer-like leafs on the dish are called ‘yarrow’. They had a slight bitter taste and fibrous texture when eaten alone, but added an interesting dimension when eaten alongside the other ingredients. 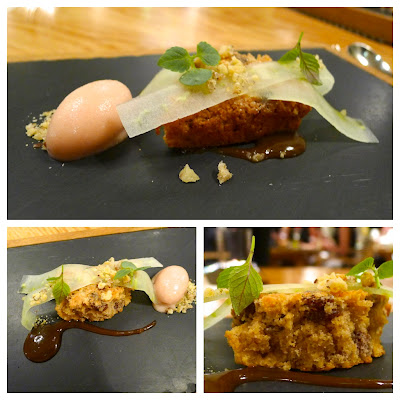 Warm apple cake, walnut caramel, apple sorbet & liquorice – this was my wife’s favourite. The cake had the most amazing texture, the caramel was divine and the hit of liquorice really worked for us. 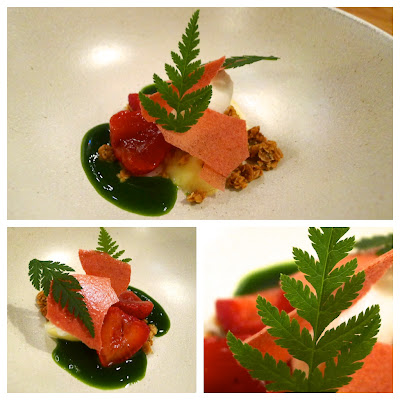 Macerated strawberries, buttermilk custard, sweet cicely, yoghurt – with an anise essence similar to caraway or fennel, cicely is another underused herb that Simon cultivates to replace flavour profiles in his food from ingredients that are “off limits”. 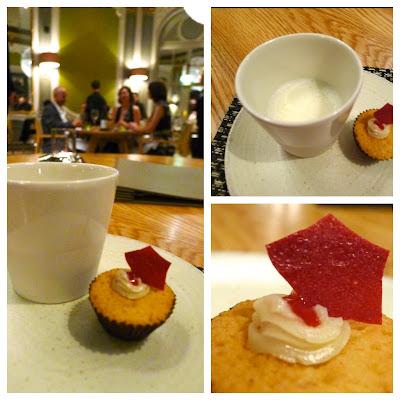 Douglas fir milkshake with Victoria Sponge – a refreshing end to another excellent meal at The French (with a little help from Roganic).

In the words of Manchester band, The Mock Turtles, “Can you dig it, oh yeah?” If do, and you ‘dig the city of Manchester’… go to The French by Simon Rogan, order the ten-course menu and… “Dig in!”