Since discovering that the chefs representing the North West on this year’s Great British Menu were Aiden Byrne, Aumbry’s Mary-Ellen McTague and Chris Holland, I was especially excited to watch.

Firstly, I was glad that each of the chefs actually live and work in the North West as this has not always been the case. The fact that I have eaten in each of their restaurants on more than one occasion and know their food well also added interest.

With Mary-Ellen’s and Aiden’s illustrious Michelin starred backgrounds, Chris Holland was perhaps always going to be considered the underdog. 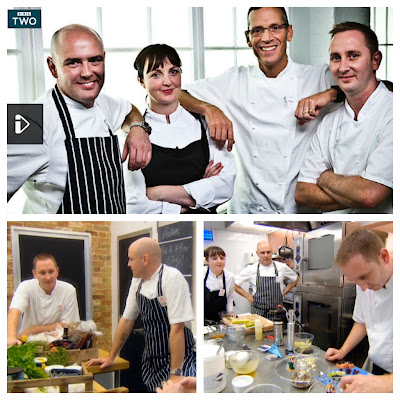 In my opinion, Phil Howard, the two Michelin starred chef / proprietor of The Square in London, made an excellent judge. I felt his comments were fair and his criticisms were always constructive. His scoring too, generally seemed bang on.

This brings me to my main point - as I watched, my twitter feed was buzzing with people sat at home agreeing and disagreeing with Phil’s and the judges’ scores. This begs the question, how can people pass judgment (as I did too) when they haven’t even tasted the food? (I’ll get to this in a moment.)

This can also lead to a bigger question: What qualifies a food blogger or restaurant critic to pass judgment on a chef’s food? Even when they (we) have eaten it! 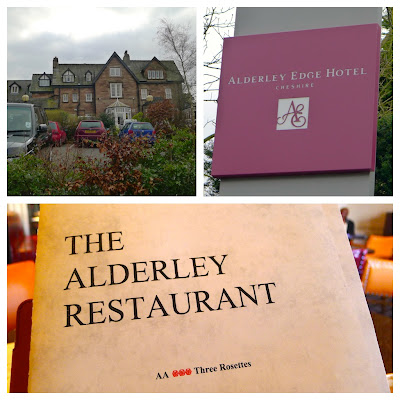 Just last week on twitter I saw a fairly well respected chef questioning a food critic about this very subject; saying something along the lines of  ‘What qualifies you as a so called food critic? Have you been a chef? Do you cook every day?’ In this case, the ‘so called’ food critic had worked in professional kitchens and does indeed cook regularly at home.

Personally, although I feel I am a fairly competent cook, I eat out far too much to claim that I cook ‘regularly’ and I have never been a chef. So what qualifies me to make the comments that I do in my blogs? In short… absolutely nothing!

Phil Howard’s former employer, Marco Pierre White, famously handed back his three Michelin stars, saying of the guide’s inspectors, “I was tired of being judged by people who had less knowledge than me.” 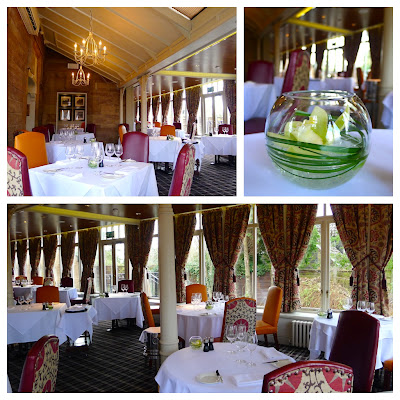 When it comes to cooking, I certainly have less technical knowledge than most (if not all) the chefs on whom I pass judgment. But isn’t this just the way of the world?

Doesn’t every footie fan sit in their armchair or stand on the terraces shouting ‘advice’ at professional footballers? Likewise, everyone who watches programmes such as the X-Factor suddenly become music moguls with the voices of angels. Many people will also confidently tell you that Tracey Emin’s bed is not ‘art’.

Art is obviously highly subjective and sport stars are subject to changes in ‘form’. Despite differences in tastes, music is perhaps easier to ‘judge’ because of the mechanics of pitch and what is ‘in tune’ - so you don’t have to have to be able to sing to be able to judge musical talent (i.e. Simon Cowell and Tulisa!). 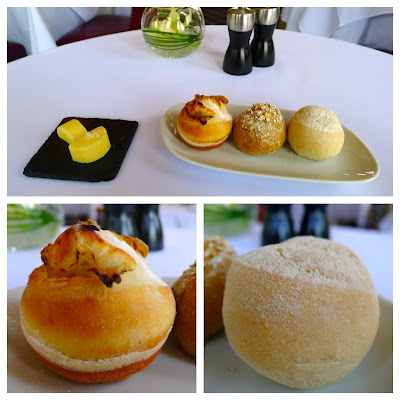 Like music, when it comes to food people have different preferences and palates but there is also a set of generally accepted criteria about what are agreeable flavour combinations (which some chefs like to challenge.)

At the end of the day, whether I am qualified to judge or not, like footie fans or people viewing art… I’m going to do it anyway!

(In my defence, I like to think I have a decent palate and a reasonable knowledge of different foods and ingredients and many ‘benchmarks for quality’ and ‘experience’ from eating in a myriad of ‘top’ restaurants.)

What follows are descriptions of Chris Holland’s Great British Menu dishes (complete with my unqualified judgements), which are currently being served at The Alderley Restaurant. 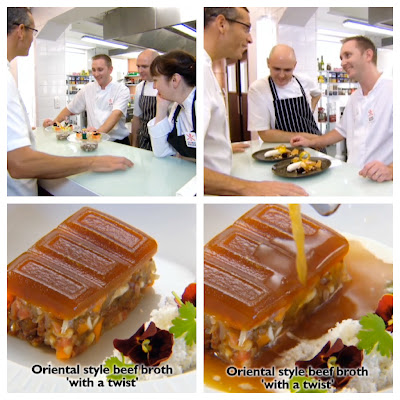 On the show, Chris served Phil Howard ‘An oriental broth with a twist’ which featured a ‘technically challenging beef stock jelly’ and noodle dish, in the guise of a chocolate bar. Phil Howard liked the concept but felt there were temperature issues and gave it 6 points. 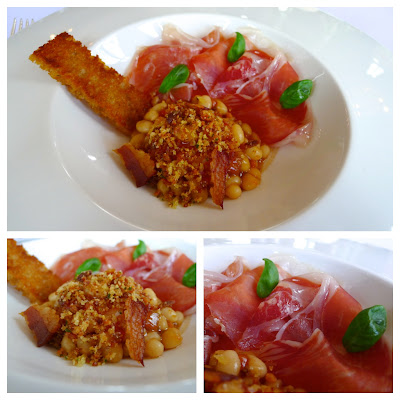 On the Alderley menu, Chris has replaced this dish with ‘A Breakfast to Start’ that features a slow cooked free range egg, Jamón Ibérico, beans and toasted soldiers. The flavours were bold with great textures and, Mr Howard, it was nice and hot! On taste alone I’d happily award this dish an 8 but I’m not convinced it nailed the brief so I think a 7 is more apt.

‘Gone Fishing’ was a dish that impressed on TV. With its quirky ‘fish pond’ presentation, cured and smoked salmon, apple pickle, horseradish and toasted beigel, Phil gave it 8 points. 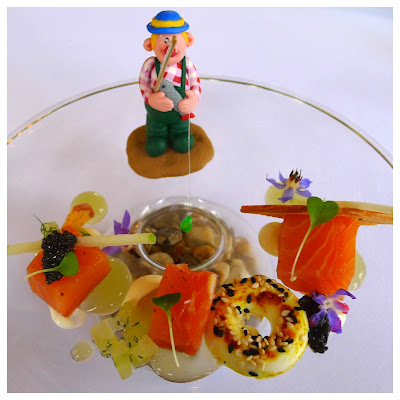 The humous comes from ‘Bertie Bass’ the fisherman (as mine was called) casting his rod into a smoky ‘pond’ and dish based on the idea of a ‘deconstructed’ smoked salmon and cream cheese beigel. 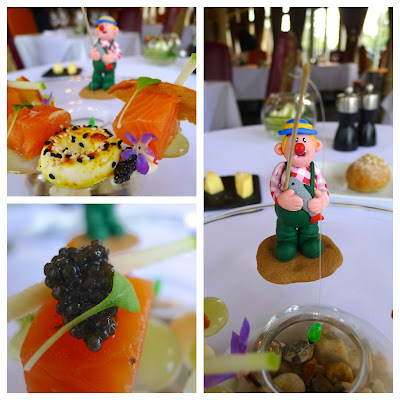 The most fun of the edible parts of the dish came in the form of a Beigel shaped savoury horseradish ice cream. This I felt worked really well adding an underlying heat that was punctuated by the delightfully smoked salmon, sweet and tart apple components and heavenly Ebène caviar.

Phil gave it 8 points, questioning the sweetness of the ice cream. I don’t know if Chris addressed this but I’d also happily give it an 8. 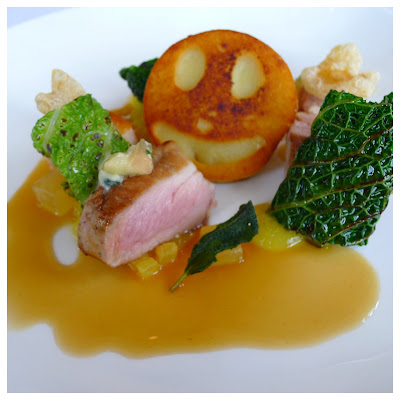 ‘Pork and Pineapple with a Smiley Face’ whilst it didn’t split my sides, when this dish was placed in front of me it did manage to illicit a wry smile. I loved the pork elements: belly, fillet and scratchings and the rib meat contained within the smiley face. The blue cheese, sage crisps and charred brassicas were also very good. 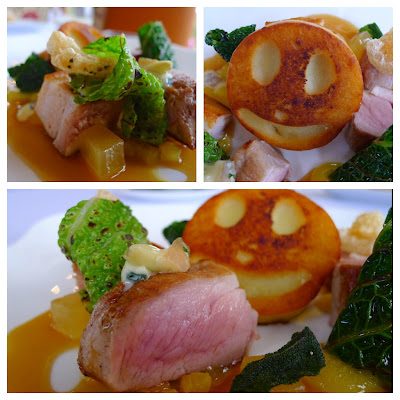 Apple sauce is the perhaps the most commonly accepted accompaniment with pork but I’m not a fan of its sweetness. The pineapple gel, jelly and dice took this a step further wand was not to my taste. Phil scored this dish a 7. If the pineapple was toned down, I’d agree but with the sweetness intact, it’s a 6 from me. 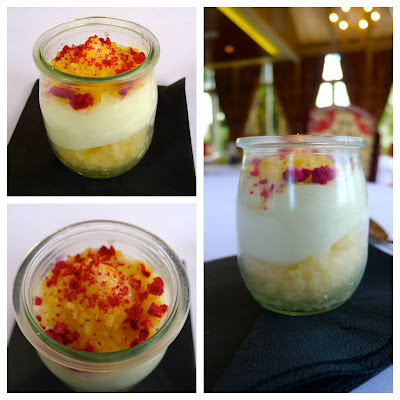 The ‘Refresher Course’ of a lime espuma with lychee granita and popping candy was not a part of the Great British Menu but as a refreshing palate cleanser (and nothing to do with the brief) I’d award it an 8. 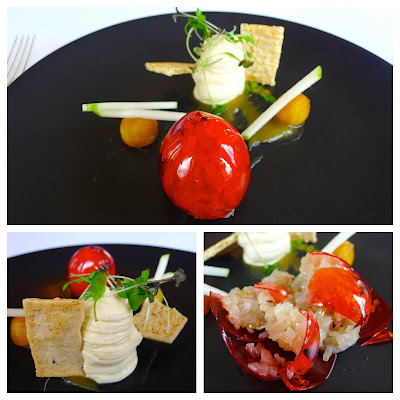 The ‘Brie and Toffee Apple’ “cheese course” was another that wasn’t featured on the GBM show.  The whipped Wigmore cheese and apple aspect of the dish was great but I didn’t like the red nose toffee apple with it at all – sticking a red nose on something does not make it funny… we are reminded of this each year when Lenny Henry wears one. 5. 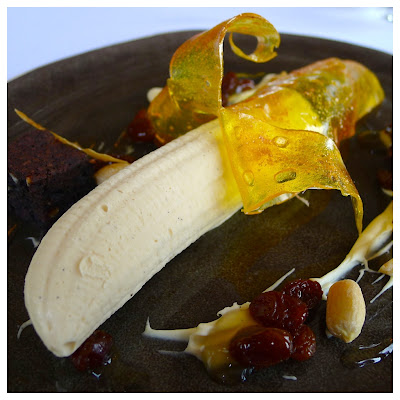 Bananas are not one of my favourite fruits but I loved Chris’ ‘Going Bananas’ dish. I thought it looked the (monkey) business and the flavours had great synergy with the banana, chocolate brownie, peanuts and rum flavours. There is also something intrinsically funny about a banana. 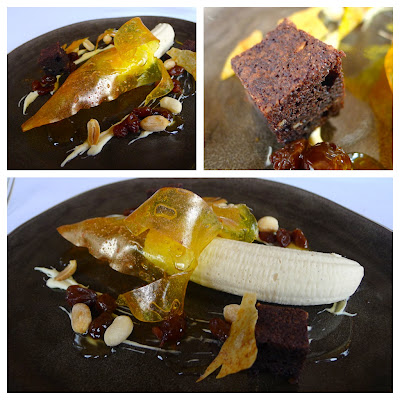 The ‘banana’ itself was made from a creamy white chocolate parfait and the ‘skin’ from a banana flavoured sugar candy. Mary Ellen said, “There’s nothing really wrong with any of it but there’s nothing that makes you go wow either.” Whilst I agree that there will perhaps be other deserts on Great British Menu this year that offer a bigger ‘wow factor’, I really enjoyed eating Chris’ dessert. Phil gave it a 6. I’d give it an 8.

Judgements aside, the main thing to remember that Chris Holland is a great chef serving some excellent food (Cheshire Life’s NW Chef of the Year, 2012) and the Alderley Restaurant is a wonderful venue with three AA rosettes. You could go at any time of the year but why not go soon for the Great British Menu? It’s for a great cause… 10% of the menu’s cost goes to Comic Relief!