2012 promises to be a great gourmet fun-filled foodie year for me, I have trips to Paris, London and Singapore booked and hope to visit Barcelona soon - but where better to enjoy my first Michelin starred meal of the year than one of my all time favourite restaurants in the world… Fraiche. 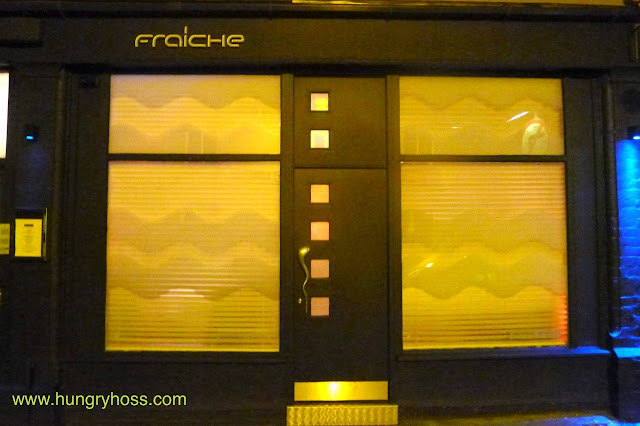 Having blogged about Fraiche on a few occasions now, I believe the quality of chef Marc Wilkinson’s food just gets better and better – of all the one starred places I have eaten, to my mind, along with L’Enclume, it remains amongst the most deserving of being awarded a second Michelin star. 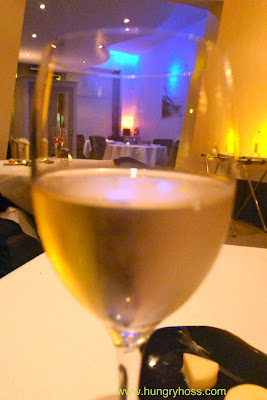 With little to add to previous posts, what follows is essentially a picture post (with a few notes) charting the courses featured during our most recent meal so that readers who have not yet been to Fraiche can get a flavour of what to expect if they are lucky enough to secure a table. 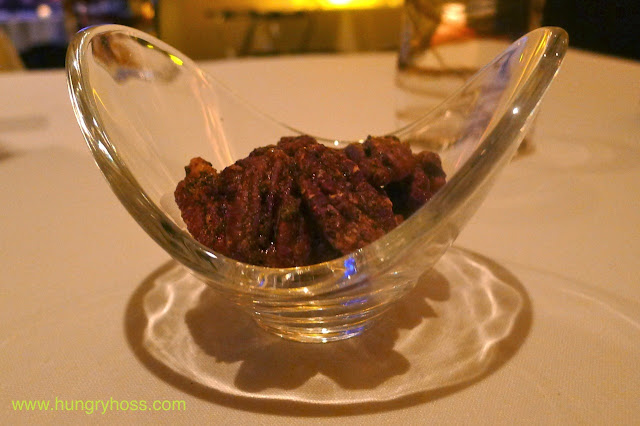 As usual, the meal started with some simple but tasty Spiced Pecans whilst we perused the impressive Sherry menu. 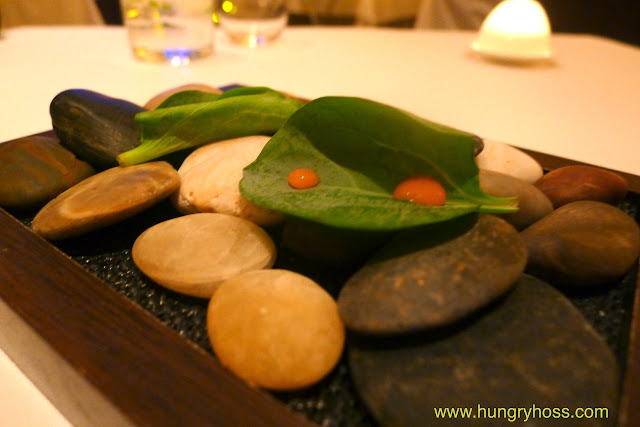 Oyster Leaf with a dewdrop of Sea Buckthorn Gelée – in the past Marc has served these with a Champagne Gelée, which to my taste I prefer to the Sea Buckthorn. Both however hare delicious and these phenomenal leaves never fail to amaze. 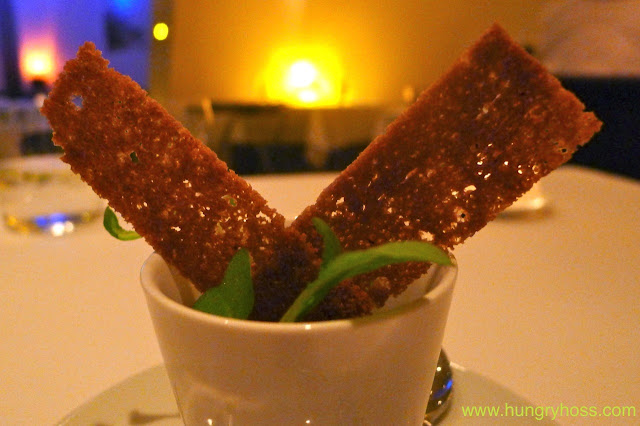 Marc had me drooling earlier in the week when he posted a picture of some gorgeous looking black truffles on the ‘Restaurant Fraiche’ Facebook page. Hoping they would feature on the menu I was overawed to discover that had been indulgently paired with Foie Gras Mousse, Apple Jelly and crisp gingery wafers – a delightful dish. 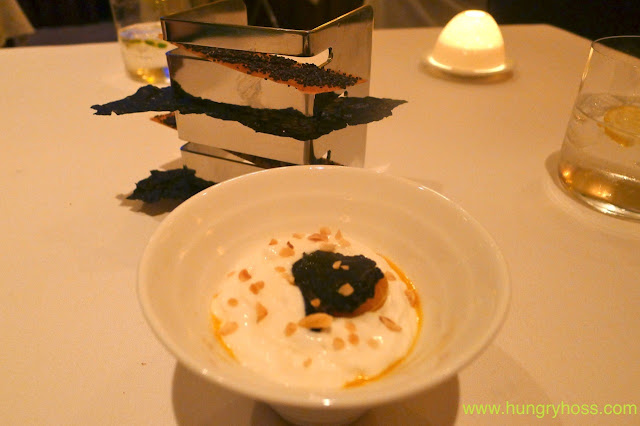 The truffles also made a welcome appearance in the next course, a Butternut Squash & Tangerine Espuma with Yoghurt Mousse, which was topped with a slice, and flecked throughout with tiny slivers of the heady Truffle. served with Poppy Seed and Squid Ink Wafers. 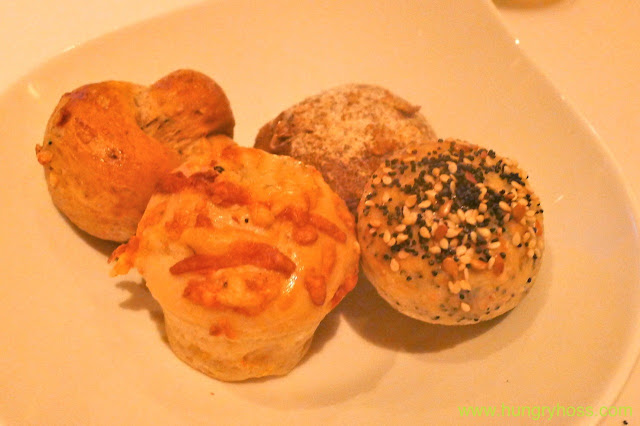 Having dieted for most of January, to say I was looking forward to the breads at Fraiche would be a massive understatement. Certainly living up to my expectations, the first round included Cheese, Five Nut, Mixed Seed and, my favourite, Granary & Treacle. 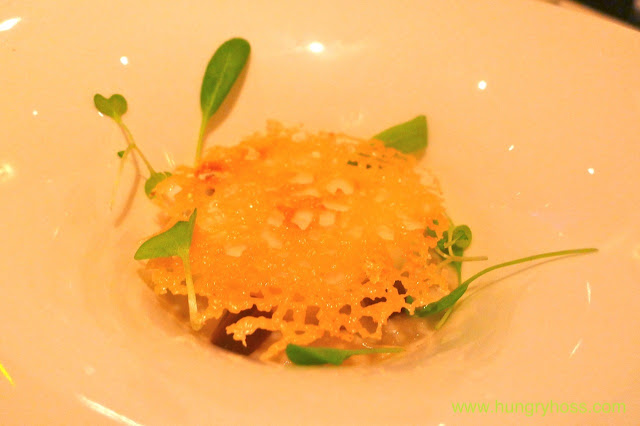 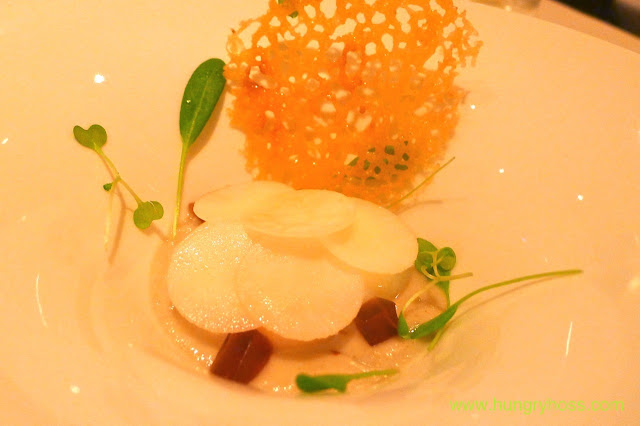 Up next, my wife’s favourite dish of the evening, Slow Poached Hen’s Egg, Smoked Artichoke Cream, Pickled Artichoke and White Port Jelly, topped with a Cheese Crisp – a wonderful and harmonious balance of texture and flavours. For me, the smokiness of the artichoke cream and the white port jelly were especially pleasing. 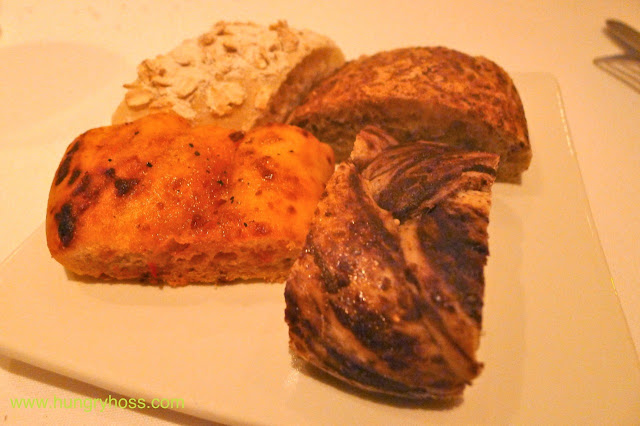 More breads, consisting of Organic Oat, Tomato, Mushroom and, my pick of the bunch, Black Olive. 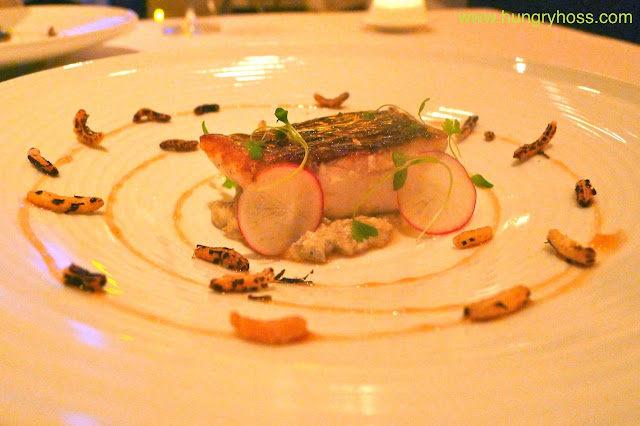 My favourite dish of the evening was served next, Wild Sea Bass, Aubergine Yoghurt, Radish, Puffed Wild Rice decorated with a tartly, sweet vibrant swirl of Verjuice. Verjuice (or verjus) has been around since medieval times but I was first introduced to its joys at Aumbry (see here) – it is a gentle acidulant which can be made in a number of ways, often from unripe sour fruits and even crab apples. Fraiche’s is made by reducing grape extract and added a fresh zing, which really bought out the flavour of the flawlessly juicy bass. 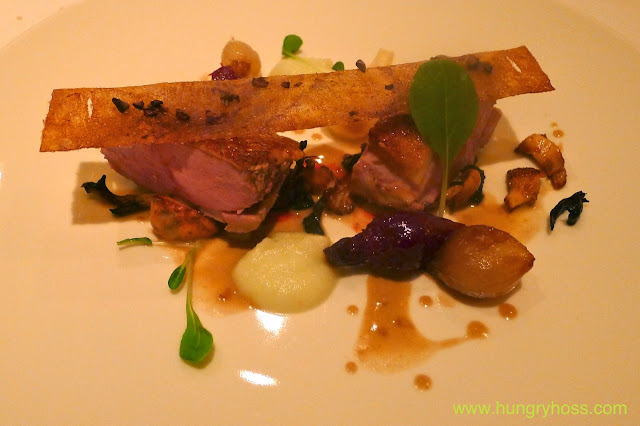 Our meat main was, Gressingham Duck with Kohlrabi Purée, Roasted Shallot, Pickled Grelots and Chanterelles, topped with a Potato Crisp and Cocoa Nibs. A very typical, excellently executed and flavoursome Fraiche meat course; Marc has a wonderful ability to get maximum flavour out of the quality produce. I’m not usually a fan of chocolate used in savoury dishes but the subtle bitter richness from the cocoa nibs was a masterstroke 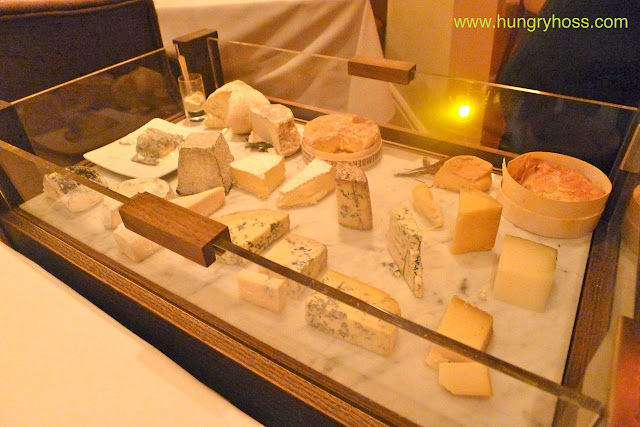 On our last visit to Fraiche the cheese chariot was absent so it was wonderful to see it back with such a fine selection of artisan cheeses. James, the new headwaiter, was very knowledgeable and able to suggest cheeses for me to try alongside my favourites. One such suggestion was for the Gaperon a l'Ail, which is a soft, crumbly yet creamy cows milk cheese flavoured with pepper and smoky garlic. 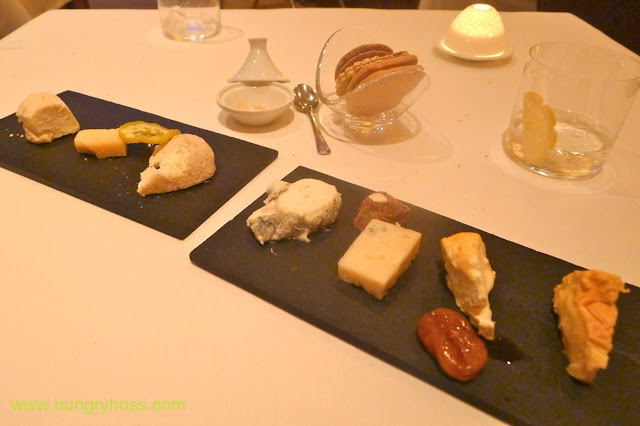 Being picky, I’d like to have seen a couple more hard cheeses on the board although the Beaufort (a type of gruyère) was pleasantly delicate and fruity. The soft rinded cheeses were wonderfully ripe and elastic but not too runny - especially good with wonderful spicy notes were two of my all time favourite cheeses, a Livarot and a Langres. 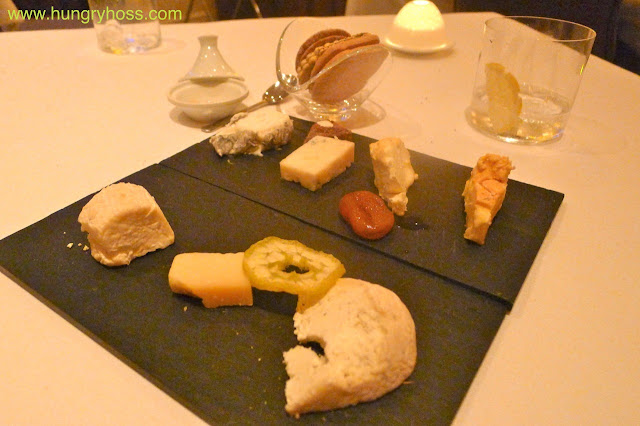 Another of James’ recommendations, which similarly had delicious spicy qualities as well as salty tanginess was a Bleu de Basque – I also tasted a hint of apricots, although this may have been more pronounced due to the sherry soaked apricot that was served alongside the other tasty and imaginative condiments, including: pistachio dust, dehydrated apple, pan de higo and a sublime Chablis jelly. 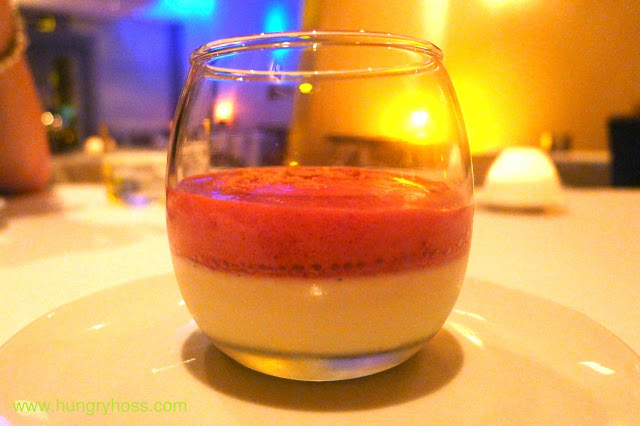 Our pre-dessert, one that I have raved about in previous posts (see here) and which also made it into by best of 2011 (see here) was the phenomenal Lemongrass Panna Cotta with Sour Cherry, topped with flakes of dehydrated grape – it never fails to thrill me! 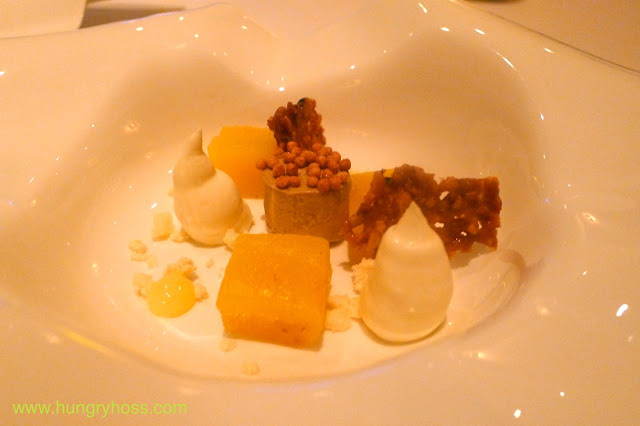 At Fraiche, diners are usually asked if they would like cheese or the day’s sweet dessert, which was ‘Pineapple’. Knowing it would be special (and loving cheese so much), naturally, I opted to pay a supplement and have both! Therefore, what we thought was the final course of the evening was our dessert of, Poached Pineapple, Frozen Coffee Parfait, White Chocolate Ice Cream, Milk Crumb with Nut Brittle and Chocolate Rice Puffs – it did not disappoint! 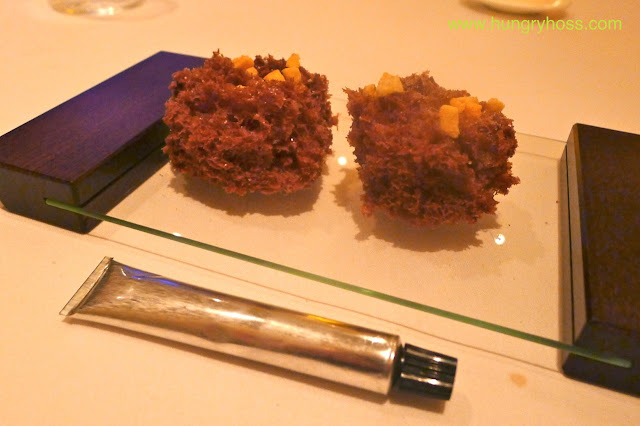 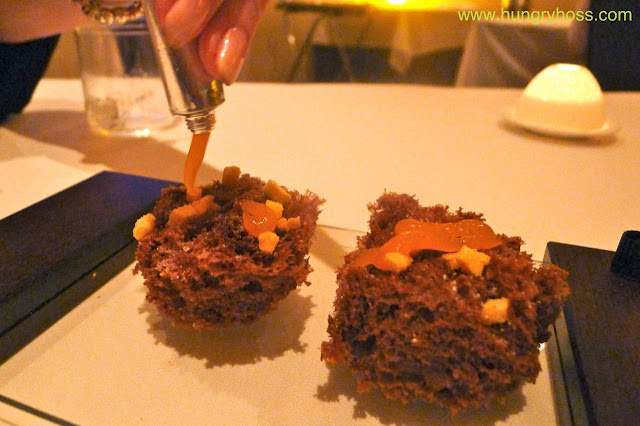 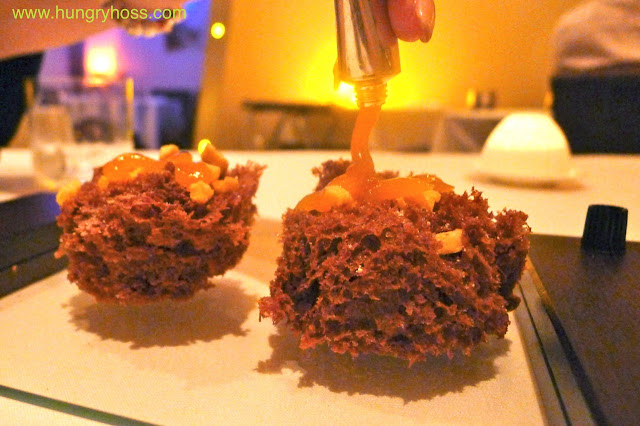 Then, as we expectantly awaited the arrival of the tea and coffee menu we were brought Chocolate Cake with ‘Apricot Toothpaste’ – the chocolate cakes clouds were so light, they seemingly  had to be weighed down with ‘yoghurt powder coated dried apricots’ (thanks Twitter @marcatfraiche) to stop them from floating away! Now, it is said that ‘little things please little minds’, and taking the lid from the natty ‘toothpaste’ tube, puncturing the seal and squeezing out a delicious apricot purée certainly pleased mine! Great fun, great flavour with a good measure of ‘wow’ factor! 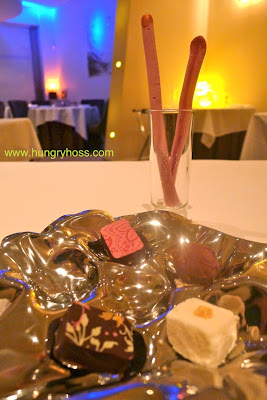 From the Tea & Coffee menu, I selected a White ‘Tea of Life’ served with a selection of Petit Fours, including: Raspberry & Rose Chocolate, Passion Fruit Marshmallow and sticks of Berry Meringue.

As usual, an amazing experience and meal - usually we have a couple of months between bookings but luckily this year we managed to secure a meal for Valentine’s Day… I cannot think of a more romantic place to dine.