Earlier this month, after an unplanned mission we ended up at Manchester’s Sapporo Teppanyaki. We had set out for our local Gusto, arriving to discover that they were closed for a staff party (to say thank you for all their hard work in 2011). No problem, I thought and promptly suggested driving into town to check out Australasia – Manchester’s new fusion (sorry) “Pan Pacific” restaurant that has been ‘on my list’ since it opened last autumn. 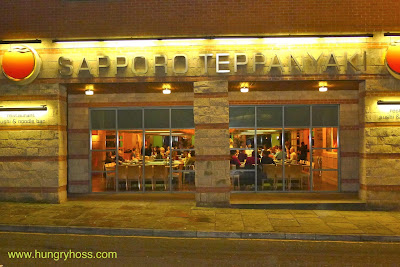 Pleasingly, despite the hour, we made good time into the city and (after dropping my passengers off at Spinningfields) quickly found a space in convenient ‘The Avenue’ car park. Then the bad luck struck once more as I got stuck in the lift – I pressed the alarm and help was soon on its way but a lack of signal meant I was unable to phone my wife to tell her of my plight. By the time I was freed I expected my dining companions to be on to their main courses. I finally reached the surface and ran to Australasia’s entrance ignoring my phone as I thought it would be quicker just to get there and explain my lift bound adventure!

Panting and out of breath, I arrived at Australasia’s subterranean entrance only to discover an A4 piece of paper blue tacked to the door apologising and informing customers that they were closed for the evening for a staff party! Who says lightening does not strike twice? – To cut a long story short, after locating my cold and lost dining companions who had been walking the streets of Manchester, we made our way to Sapporo Teppanyaki delighted to discover that they were not mid way through their staff festive festivities! 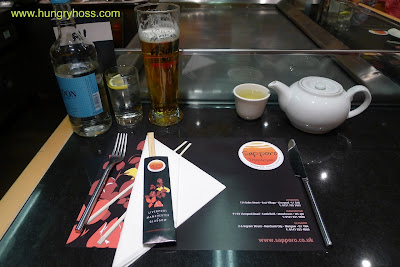 My large water, to quench my thirst from running, pint of Asahi to savour and green tea to warm me through soon arrived and orders were placed. The venue itself consists of several large islands; each based around two ‘teppans’, surrounded by eighteen comfortable chairs. There is also a large bar area and lounge. Some interesting antiques and artworks, such as a delightful thatched garden shrine, provide authentic Japanese touches. 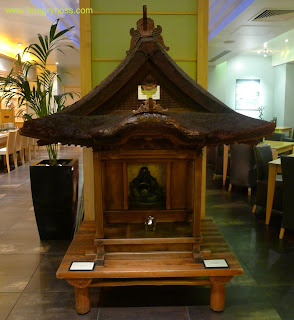 My wife and I had visited Sapporo before, albeit the Liverpool branch, and knew what to expect but our dining companions were soon surprised and delighted by the chef’s shenanigans. 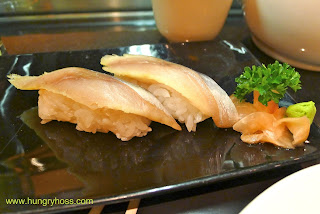 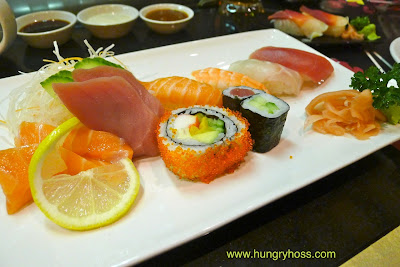 To start, we ordered a Sharing Sushi Platter, featuring a selection of nigiri, maki, some tuna and salmon sashimi and a California roll. The sushi here is not excellent (in terms of creativity and the seasoning of the rice) however the ingredients were fresh and the quality is on a par with other Japanese establishments in the area.  To supplement the platter my wife ordered some Hokkigai (Giant clam) Nigiri and I, my favourite, Saba (Pickled mackerel) Nigiri. 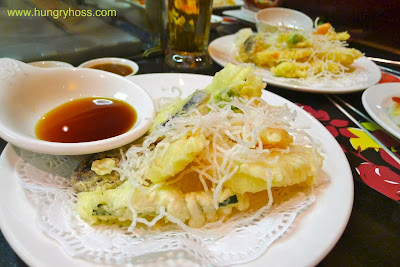 Also to start, we shared a couple of plates of the Tempura Vegetables, which included courgettes, peppers, onions, mushrooms, carrots, sweet potatoes and aubergine. The tempura batter was nice enough but would have pleased me more if it had been a little crisper and lighter. What did please however, was the welcome return of the ‘doily’ – I don’t think I have seen food served on these since eating a buffet at my Nan’s house circa 1980’s. 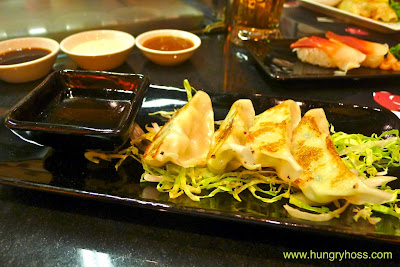 We also had a portion of Yasai Gyoza; the grilled dumplings served on top of some finely shredded lettuce with a soy dipping sauce. 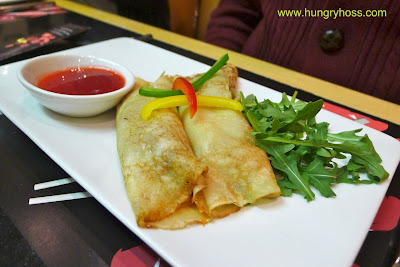 One thing that I was unconvinced by was the Duck rolls - the tender slices of duck breast wrapped in a light pancake, with mixed vegetables were tasty enough as was the accompanying raspberry coulis… I’m just not sure about them being served together! 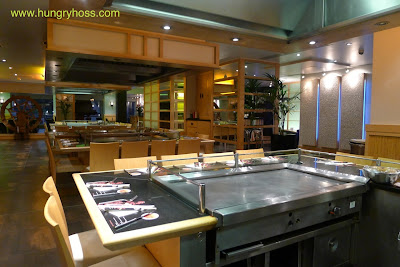 The starters were all pleasant enough but overall I’d describe them as average – but “average food” aside, the real reason for visiting Sapporo Teppanyaki is for the chef’s theatrics at the 'teppan' or iron plate. 'Yaki', means grilled. 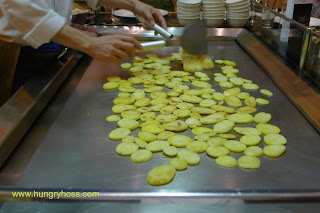 After the sauté potatoes, fried rice and vegetables (which accompany the main dishes) have been cooked, the chef’s first ‘party trick’ is to toss chopped pieces of the potatoes into the air for the diners to catch in their mouths. 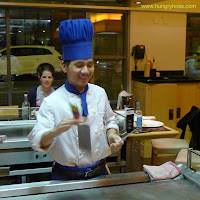 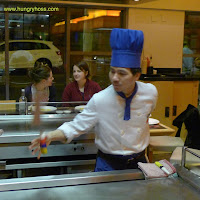 Now, I know this doesn’t should like everyone’s idea of fun but kids, young and old, seem to love it! For the adults in my party the tension was almost unbearable as my stepdaughter set the bar high by catching hers, first time! Of course, the old jokes like, ‘You couldn’t miss with a mouth that size!’ get an airing. 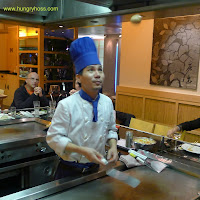 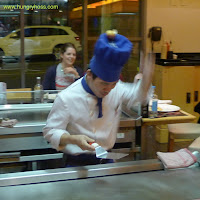 Wowing the diners, the chef’s next display of showmanship involved spatula tossing and egg spinning - building to the finale where an egg is tossed skywards to be caught atop of the toque. 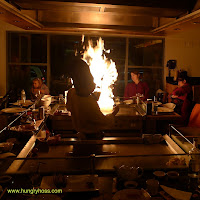 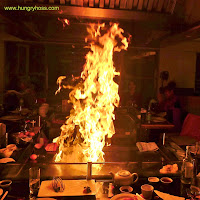 Next, the diners are asked to move their stools to a safe distance; lights are dramatically dimmed and the teppan is ignited with a woosh – followed by unanimous ‘oohs and ahhs’ and  rapturous applause! 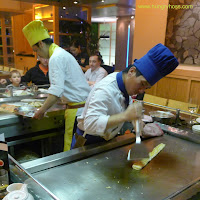 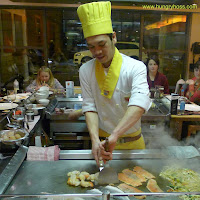 Working together to serve the three groups around the ‘table’ one chef used one of the teppans to prepare the meat dishes, the other the fish and seafood. My wife had opted for the Lamb Rump – it was a generous hunk of meat and was cooked wonderfully rare as per my wife’s request. 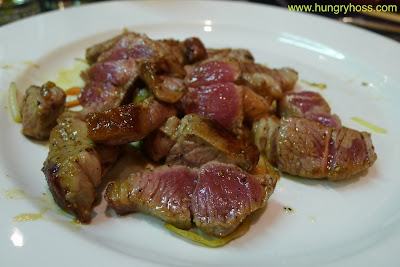 Although a little envious of my wife’s lamb, I was very happy with my Spicy Fillet of Sea Bass, which was expertly ‘grilled’ on the teppan.  The spicy the chilli dressing and garnish had a packed and pleasant punch. 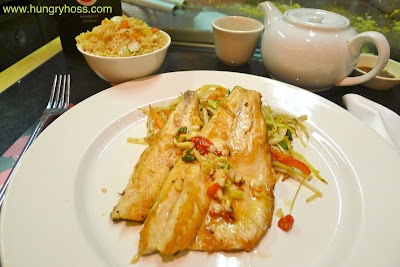 My stepdaughter’s partner, opted for the Vegetable Yakisoba. Despite tasting good, the Japanese egg noodles, stir fried vegetables and yakisoba sauce also served with the rice and sauté potatoes was a bit of a carb overload! 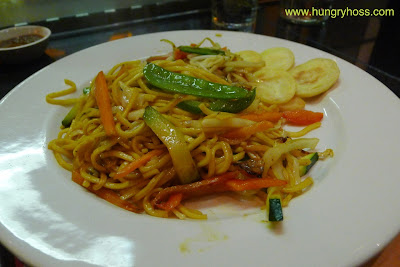 My stepdaughter chose one of her favourites, Teriyaki Salmon – again generous portions provided good value for money. Similarly, hearty portions of fried rice meant I was the only one of us who managed to eat their bowlful. Feeling full, my wife didn’t even touch hers – hating to see food go to waste I would normally have polished this off but I too, was nearing my limit. 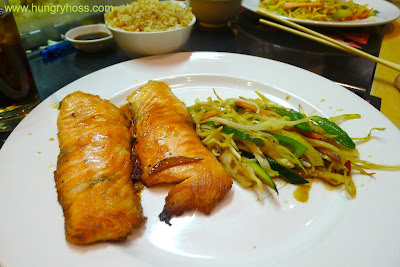 Even though I was fit to bursting, wanting ‘for blog purposes’ to see what the desserts were like, I decided to sample the Assorted Homemade Ice Cream ‘Served in a tuille tulip basket.’ Amusingly, I was informed that they hadn’t had received their “delivery” of the ‘homemade’ vanilla ice cream (which does prompt a question as to the definition of homemade) so I went for the chocolate. 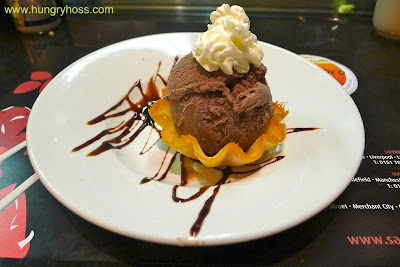 Overall, if you are seeking to sample traditional Japanese cuisine, this may not be the best place to visit - if you are looking for a fun night out with family or friends, where the food is decent then you could do much worse – we certainly left with full bellies and smiles on our faces!