Inspired my Twitter friends ‘The Critical Couple’ and their ‘Best of 2011’ post (see here) I decided to put together my very own ‘Best of’ to create my ultimate dégustation.

For me, 2011 has been a seemingly nonstop fabulous foodist adventure and deciding which dishes belong on this menu was not an easy task. I have eaten some wonderful food at some amazing restaurants this year - my trip to Singapore was phenomenal (we hope to return in 2012) and the magical meal at Mozaic in Bali was momentous as the place where I decided to start this blog.

In May, Hungry Hoss was born. I find it hard to believe that I have had this ‘hobby’ for only nine months! Through the blog and my Twitter account I have met many good people who have supported, encouraged, inspired, advised, fed and entertained me. 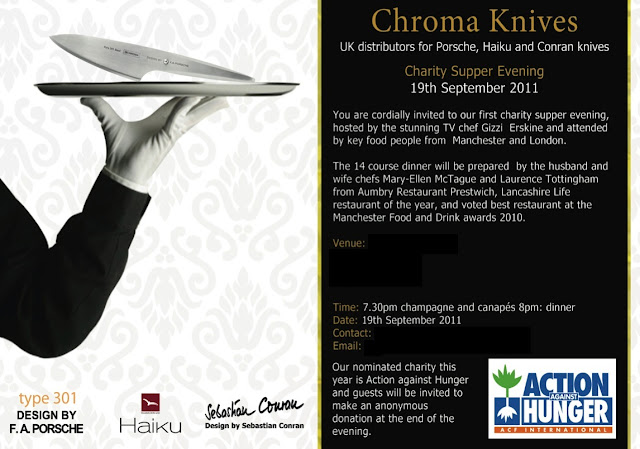 Someone deserving a particular mention, as one of my biggest champions, is Franco (@sausagemaking). Not only does Franco regularly ‘re-tweet’ my posts to his foodie followers, his kind invitation to his @ChromaKnives Charity Supper Club (and subsequent events) remains one of the highlights of the year. At Franco’s, as well as meeting his lovely wife and family, I was fortunate enough to make the acquaintance of other foodie types, such as @ThomHetheringto(n), TV’s @GizziErskine and @GordoManchester  from @mcrconfidential. 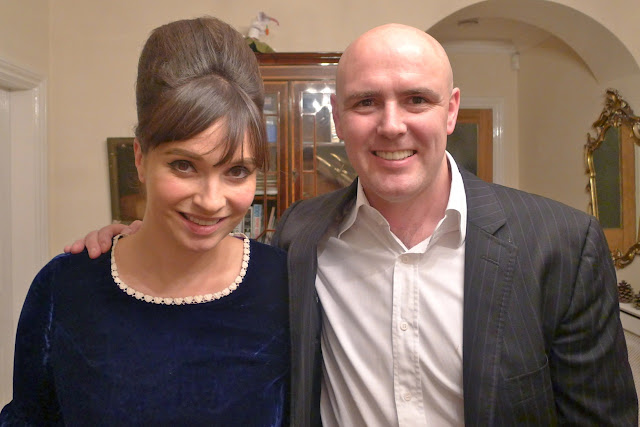 Also present at the supper club, I’d like to thank for feeding me (and looking after me) on several occasions throughout the year (and I’m sure next year too) the 2011 MFDF Manchester’s Best Chefs, Mary-Ellen (@_aumbry) and @Laurence_Tott from Aumbry; Monica and Aj from @TheSpiceClub and the hugely talented @aidenbyrne and his partner @SarahBroadleyW from The Church Green. 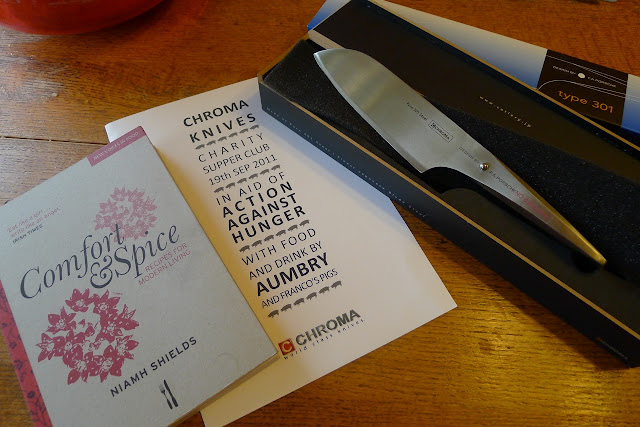 At Franco’s I also met Niamh Shields (@eatlikeagirl) the author one of the UK’s leading food blogs and the fabulous cookbook Comfort & Spice. Other bloggers who I’d especially like to thank for their support this year are Alan (@sped98) who took the time early on to give me camera and picture advice; @FFTBYD for sharing local knowledge; @laissezfare for including me in his blogroll and supporting my work via re-tweets and, the aforementioned, @CriticalCouple for their inspirational posts.

So after much deliberating, I’ve managed to whittle the menu down to a reasonable fourteen courses: 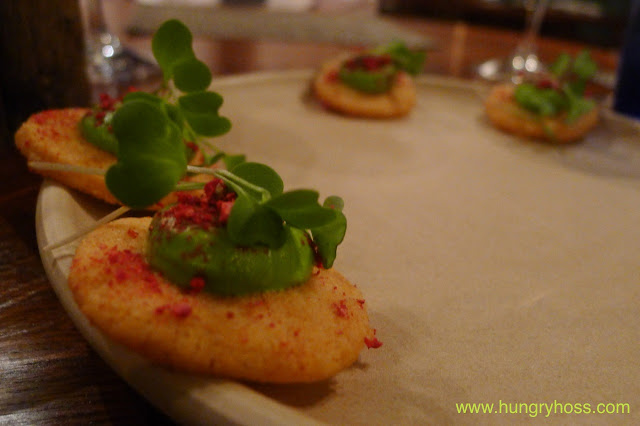 Canapé: L’Enclume – a delicious Stichleton Sablé biscuit with a silky, smooth Avocado Crème (I have yet to complete my write up from my most recent visit to L’Enclume but I’ll be working on my ‘Top 3’ in the New Year!) 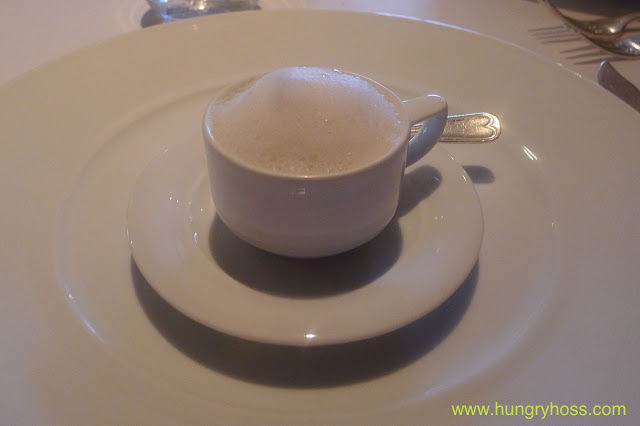 Amuse bouche: The Box Tree – bias aside, the Celeriac Espuma with Bacon Foam that I cooked whilst working at The Box Tree as ‘A Chef for a Day’ was simple, yet packed with flavour. 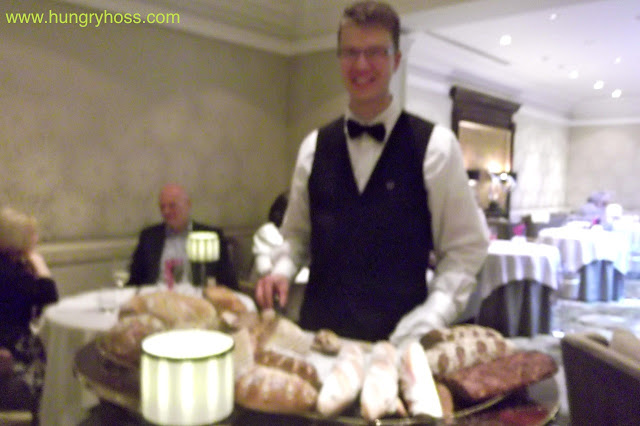 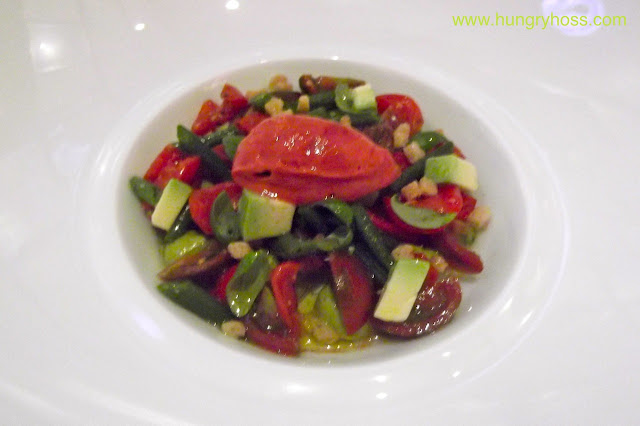 Vegetarian starter: Sketch – simply called Tomato this dish was so full of flavour. Having enjoyed Sketch so much, in 2012 we plan to visit Pierre Gagnaire’s eponymous 3-starred restaurant in Paris. 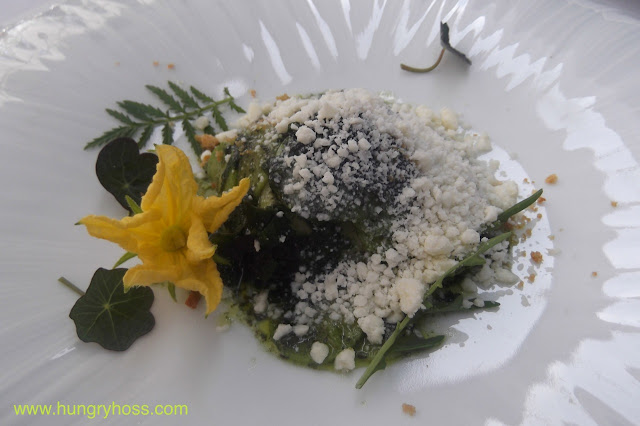 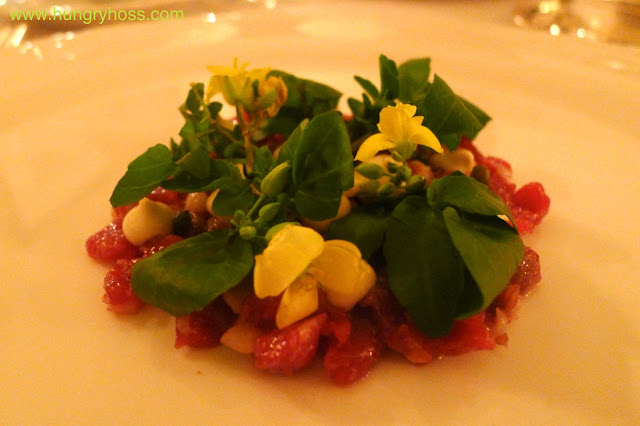 Meat starter: James Lowe of The Young Turks – as part of The Fat Duck charity reunion meal at Aumbry, James’ Raw Hereford Rib with Oyster & Wild Watercress was one of the nicest things I’ve eaten all year. When I visit London in 2012, wherever James and his crew are cooking, I will be there! 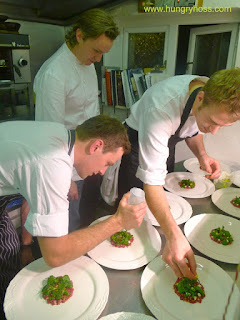 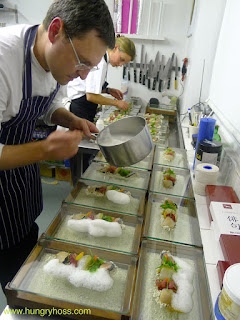 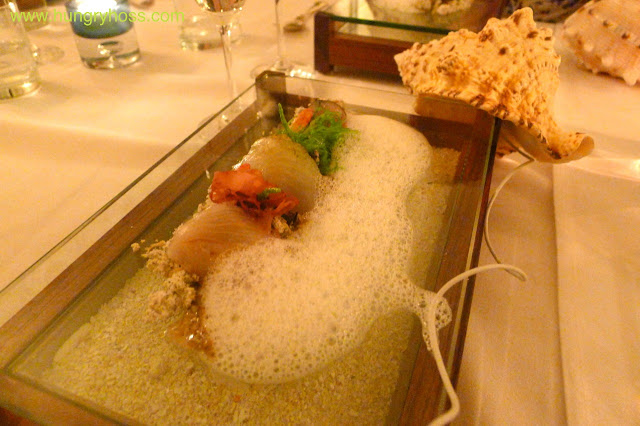 Fish main: The Fat Duck – again, prepared at Aumbry as part of The Fat Duck charity reunion by Heston Blumenthal’s Head Chef Jonny Lake, the Sound of the Sea was every bit as good as I remember it at his three starred temple of gastronomy. 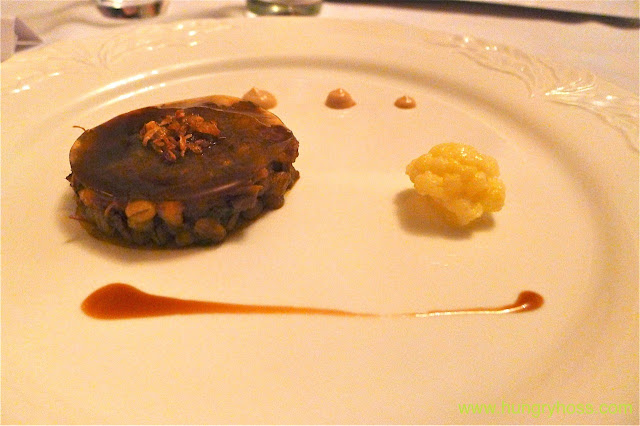 Meat main (2): Les Amis – Les Amis, in Singapore, is one of Asia’s and indeed the world’s most prestigious restaurants. The Chargrilled Wagyu Rib Eye cooked in hay, Sunchoke, Spinach & Sauce Périgourdint has to be considered my most supreme steak of 2011. 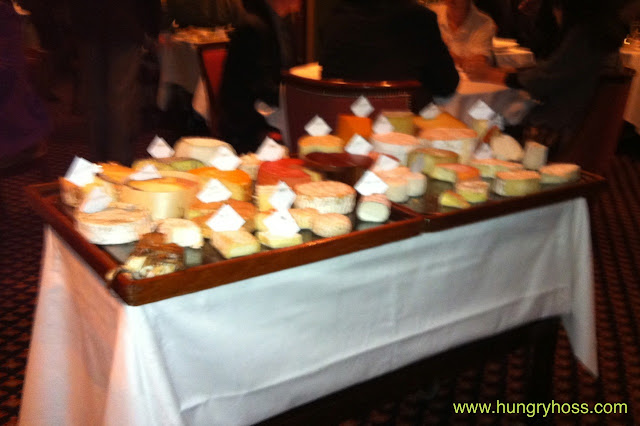 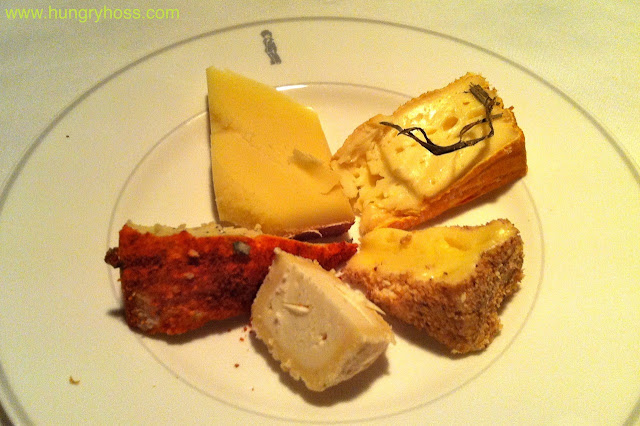 Cheese course: Le Gavroche – as well as visiting the International Cheese Awards at Nantwich this year, I have had some wonderful cheese boards in restaurants and found some great cheese shops and suppliers, such as the excellent Cartmel Cheeses (see here). Of all the cheese boards Le Gavroche’s was by far the most comprehensive and the Plateau de fromages included the wonderful Boulette d'Avesnes. 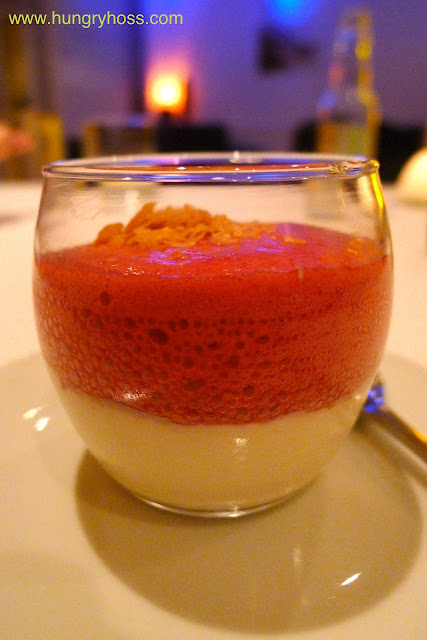 Pre dessert: Fraiche – one thing that I am certainly looking forward in 2012 is the publication of Chef Marc Wilkinson’s first cookbook; mostly because he assures me that it includes the recipe for his amazing signature pre dessert, the Lemongrass & Vanilla Panna Cotta with Sour Cherry. 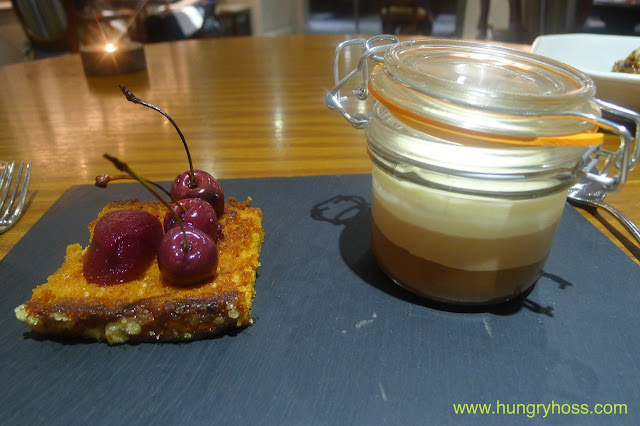 Dessert: Aiden Byrne’s British Grill – of all the desserts I’ve had this year, Adien Bryne’s Triple Chocolate Mousse with Gingerbread & Warm Cherries may not be the most ground breaking or intricate; but what it lacked in terms of theatrics, it more than made up for in flavour! The gingerbread was simply perfection! 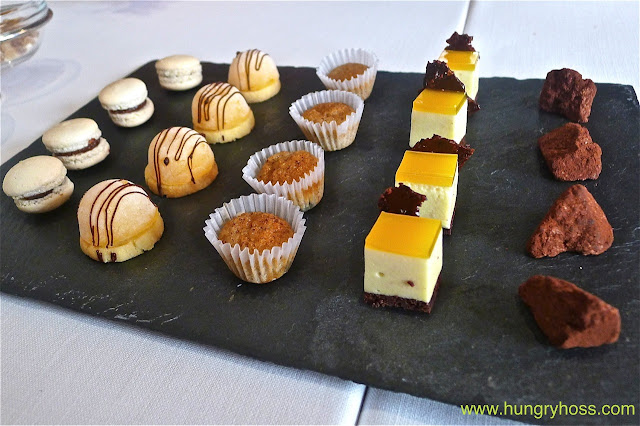 Petit fours: Café de Paris (Malaga) – brought out as part of the ‘tapas’ upgrade: a chocolate macaron; an iced orange bonbon, a sticky sweet financier; a passion fruit cheesecake and a dusted chocolate rock. All were great – my favourite the passion fruit, a great intensity of flavour. 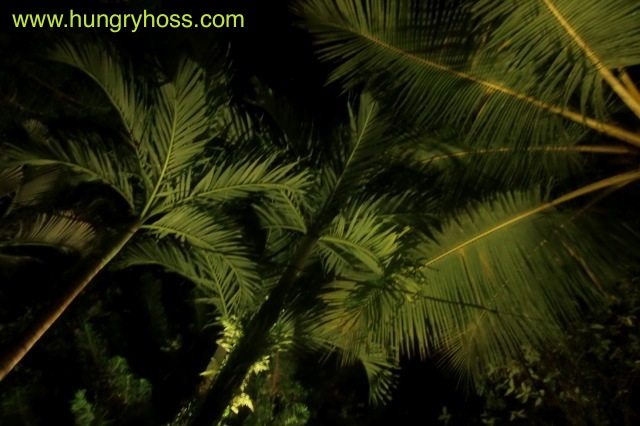 The final decision is where to eat this perfect meal? Winning hands down, the paradisal lush, tropical gardens of Chris Salans’ Mozaic in Bali. 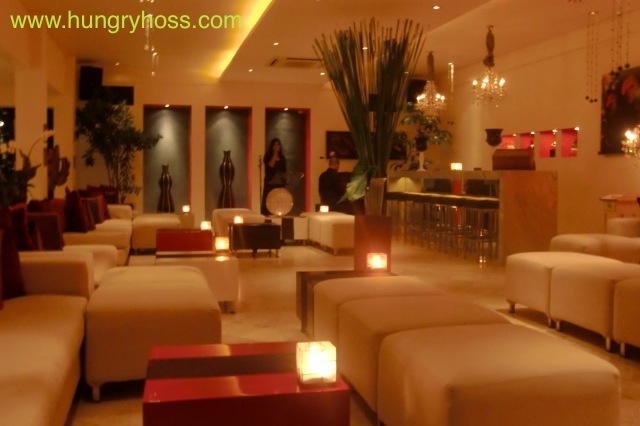