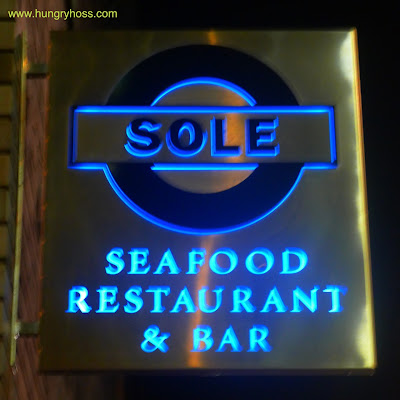 SOLE Seafood Restaurant & Bar  opened just before Christmas and has consequently been reviewed very little, therefore my wife and made our booking because we both enjoy fish and seafood.

Prior to eating there we had no expectations and knew nothing about the chef. Upon our return and being very impressed by the food a little research informed me that the Chef, Simon Salt was crowned the 2008 North West Young Chef of the Year and reached the quarter finals of MasterChef: The Professionals in 2010. He has also completed stages at Martín Berasategui and Mugaritz – where he undoubtedly learned a thing or two! 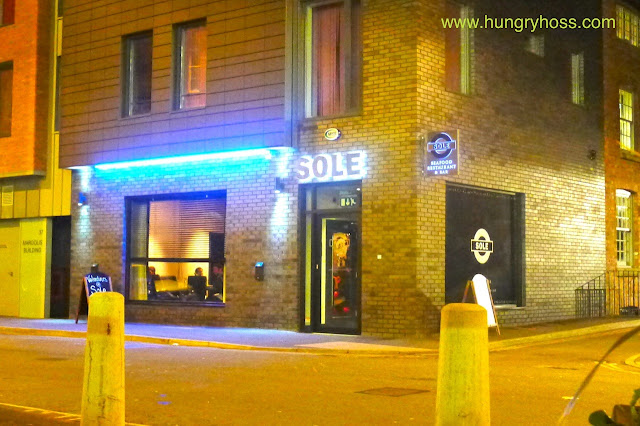 Armed with the postcode and not knowing exactly were the plaice place (sorry, couldn’t resist it!) was, we set off in good time with the usual plan of dropping my wife off before I found somewhere to park. Conveniently, the restaurant turned out to be directly opposite the Church Street NCP. 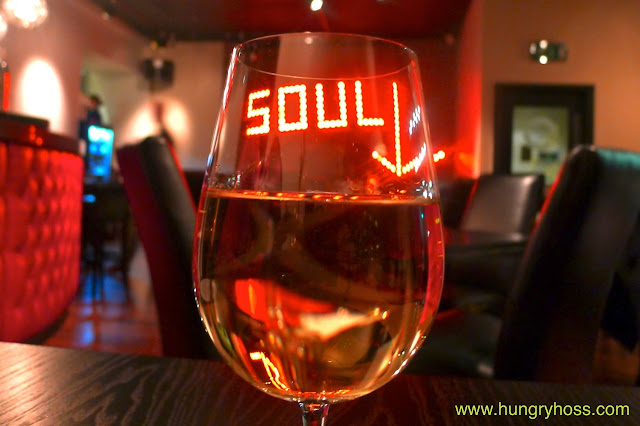 Inside, our first impressions were very positive. We found the main dining room modern and sleek. Black woodwork and off-white walls were set off by the stylish, curving, studded red leather corner bar. 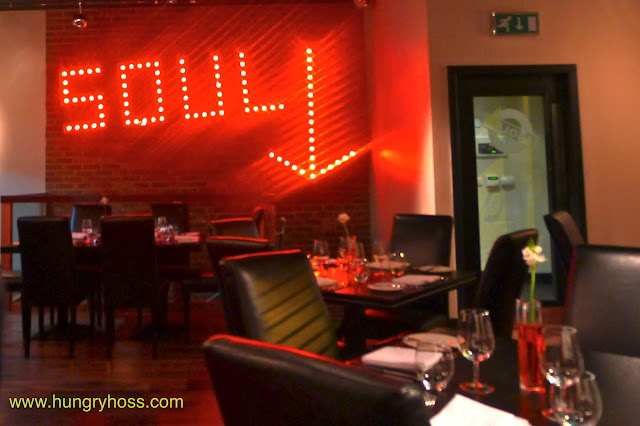 Bright red lights, set against exposed brickwork, spelling out the word ‘Soul’ with an arrow pointed downstairs to a further bar area were we enjoyed a pre-dinner drink. 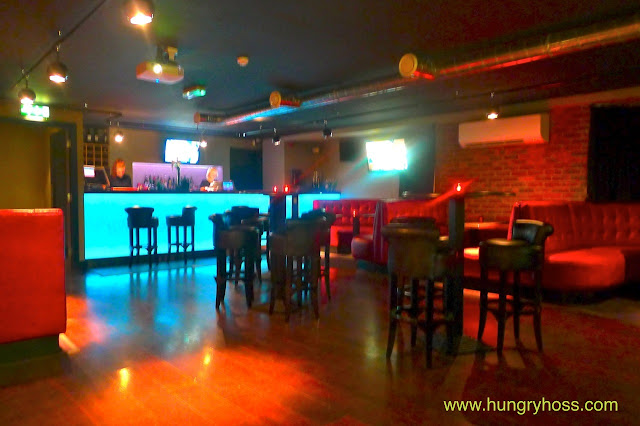 The area downstairs with its red and black leather banquettes and clusters of high stalls around round bar tables gave it a clubby feel; which was further enhanced by the electric blue bar and large video mural – and of course the sound system and DJ booth in the corner. A great venue, which can apparently be hired out for private parties for up to 80 people and seems like a good place to stop and have a cocktail or two whilst out shopping. 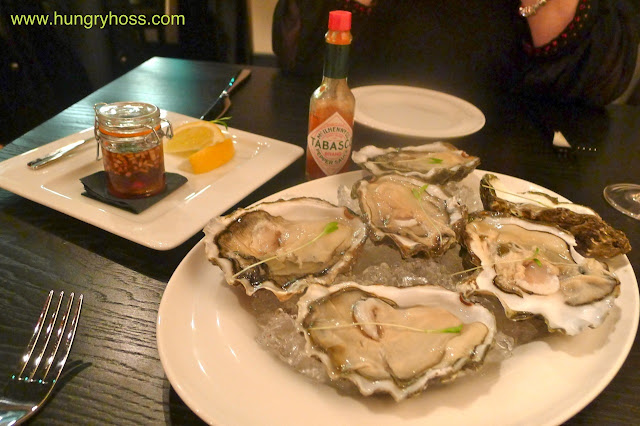 Back upstairs, we ordered half a dozen Colchester Oysters  served over ice with a dinky Kilner jar of red wine vinegar & shallots with lemon and Tabasco. As well as being beautifully served – they tasted great! 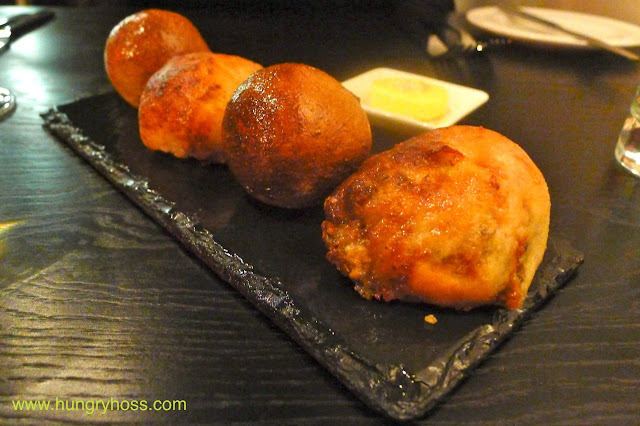 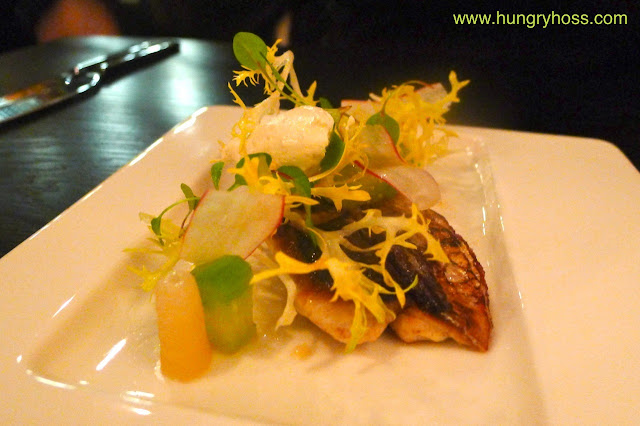 To start, my wife chose the Mackerel a la plancha with compressed cucumber, radish & horseradish. She kindly gave me a little taster - I’ve enjoyed compressed watermelon before but this was my first encounter with cucumber made using the same technique. I found the overall concept and execution of the dish to be excellent. 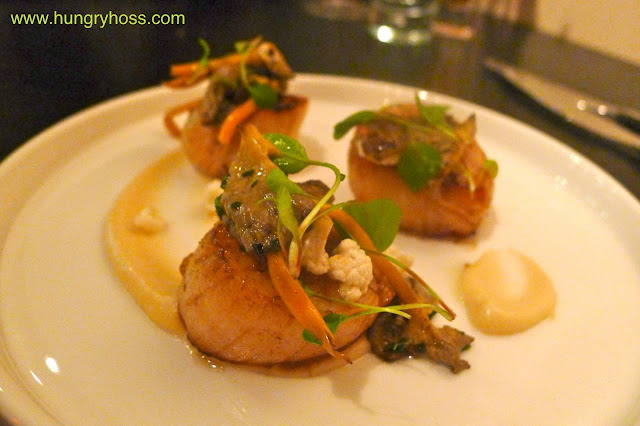 For my starter I opted for the Seared hand dived scallops with cauliflower puree & chanterelles. The scallops were plump, fresh and cooked perfectly. I particularly enjoyed the complementing acidity from the tiny pickled cauliflower florets. 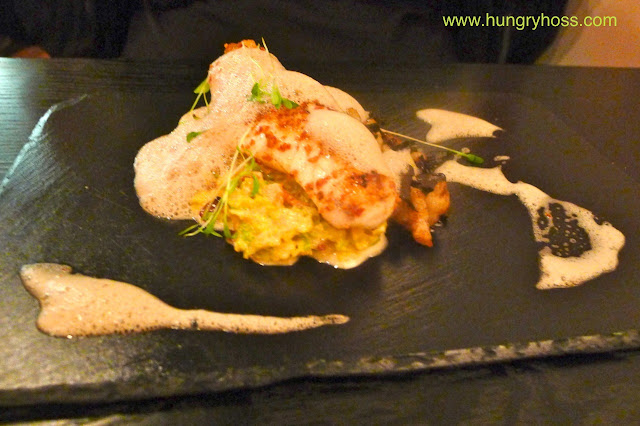 For mains, there were six choices; unusually, for a ‘seafood’ restaurant there was an equal number of fish and meat dishes (3 of each), but no vegetarian option. The loin of venison, sirloin of beef and Goosnargh duck were all tempting but we both came expecting seafood and ordered correspondingly - my wife going for the Roasted monkfish with Savoy cabbage, Parma ham & trompetes. Sampling the dish, I found that the silky and moist monkfish had good synergy with the accompanying flavours. 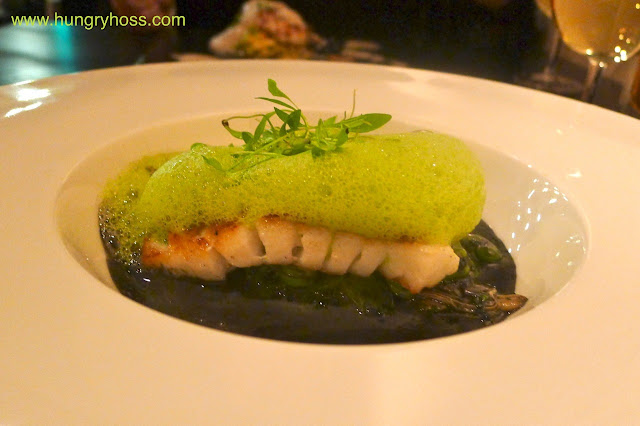 For my main, I ordered the Roasted fillet of cod, squid & clam broth with a parsley foam. The piece of fish was beautifully cooked and the vibrant parsley foam tasted as good as it looked. Not looking so good, was the ‘broth’ which turned out to be a thick, gloopy, greyish, brown soup… I know I am not making this sound particularly appetising but it was in fact delicious. 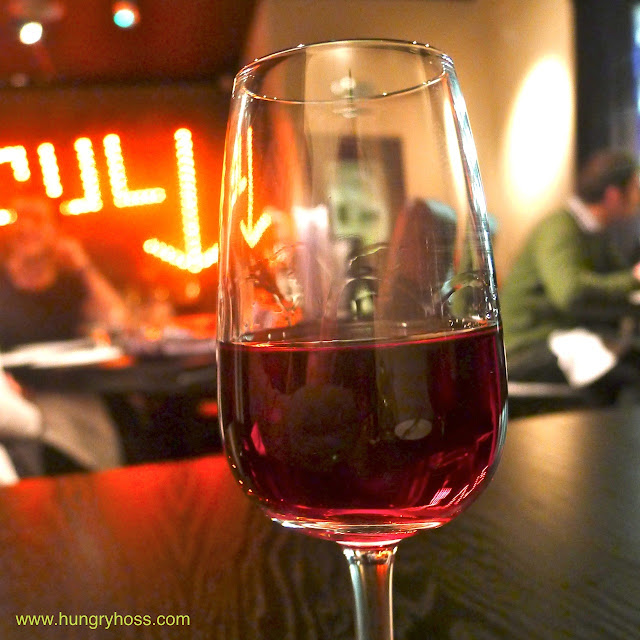 To accompany our desserts we both selected a fruity Quinta do Noval 10 Year-Old Tawny Port. I’ve had the 1975 Noval before and was not too impressed but this one was well worth the very reasonable £2.95 we paid per glass. 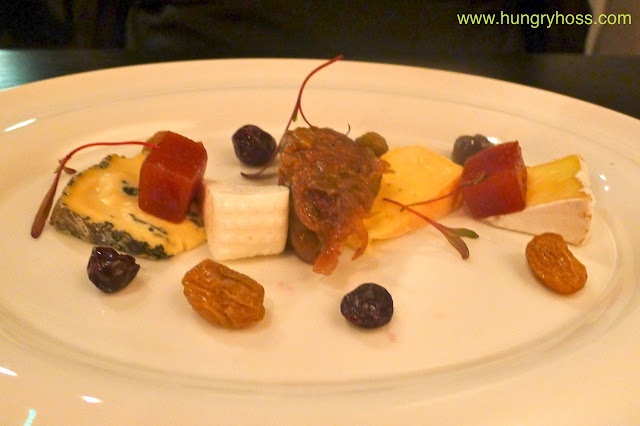 For dessert, my wife selected the Selection of British Isles Cheese, which was served with fig chutney, grapes & quince paste. The plate was attractively presented with four quality cheeses; I can’t be 100% sure what they all were but I did detect an Oxford Isis which is like a milder version of a Stinking Bishop or Époisses. 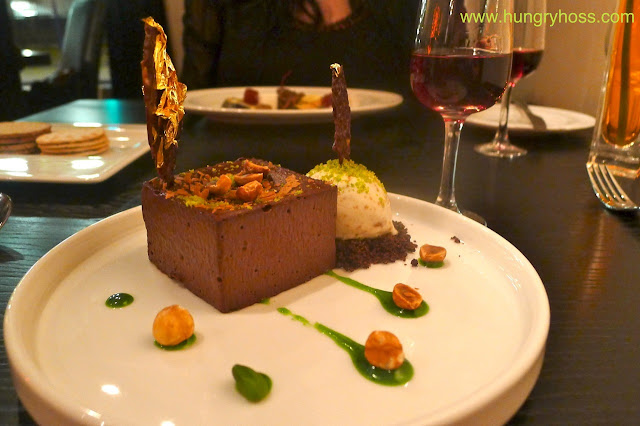 For my dessert, I indulged in the Pavé of Chocolate with pistachio purée & ginger ice cream. As if the pavé itself was not decadent enough the crisp shards of chocolate tuile were extravagantly swathed in gold leaf – a top notch dessert and a fitting end to one of the best meals that we have had in the city centre for some time. We’ll definitely be returning.