January is nearly over and the post Christmas pinch means that for many, ‘Money's too tight to mention’, so the ‘Club Mal’ 50% off food offer was too good to pass up. 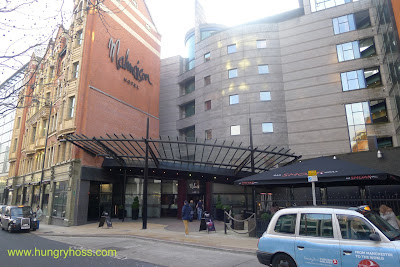 ‘If You Don't Know Me By Now’, you’ll soon realise when reading my blog, that clearly ‘Something got me started’ on this random dropping of Simply Red song titles into my posts… it can only mean one thing,* I’ve eaten at the Malmasion in Manchester. *The hotel chain was originally owned in partnership with irksome ear bothering lothario, Mick Hucknall (I’m not a huge fan – although, to his credit, he was also one of the financial backers of Manchester based reggae label Blood and Fire – of which I am a fan.) 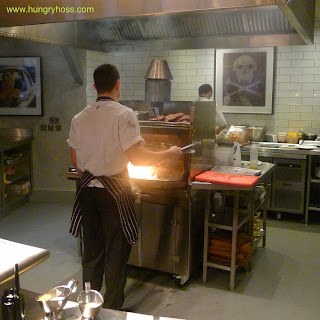 As the flame haired star no longer has a steak (see what I did there?) in the hotel, the fire and flames now come from the restaurant’s Josper grill - which takes centre stage in the open kitchen and provides the spark of inspiration for its pun fuelled name: Smoak. 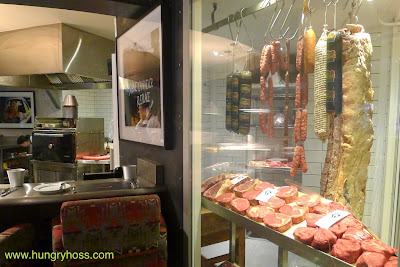 Although they have been around for a while, Josper, like Inka Grills (see here) are rapidly becoming the ‘hottest’ piece of kit to have in the ‘commercial’ kitchen. As Manchester is not particularly well known for its barbeque weather, the ability for these charcoal ovens to perfectly cook flame-grilled food to your liking is hot news - whether you like your steak well charred or Simply Red (I promise I’ll stop now!) 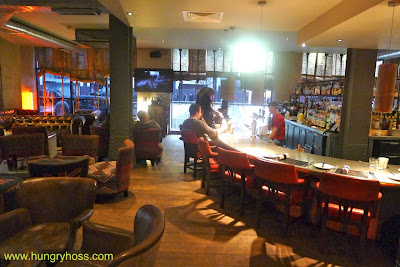 For the restaurant itself, (a bit like my introduction) I found the unashamed American themed décor straddled the fine line between that which is fresh, cool and breezy and tiredly cheesy. The whole set up reminded me of an ‘upmarket’ TGI’s – but I’m not convinced the place needed the random pieces of US objet d'art such as the old style gasoline memorabilia, sack curtains and head-bangingly low light fittings to be hip. 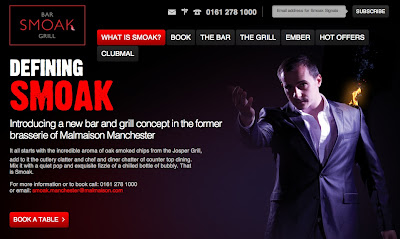 On the subject of cheesy, a colleague of mine refuses to go on the strength of the ‘egotistical’ pictures of General Manager, Mister McKenzie on the website and large advertising hoardings around the city. (Screenshot courtesy of www.smoak-grill.com) 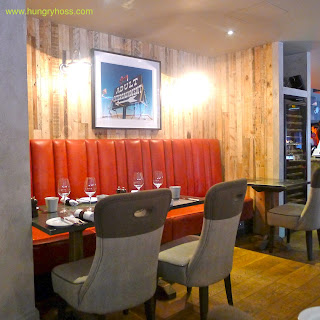 Despite many positives (which, I’ll get to in a mo) there were a few niggles, including wonky tables, and metal water beakers that reminded me of drinking out of a Primary School art pot 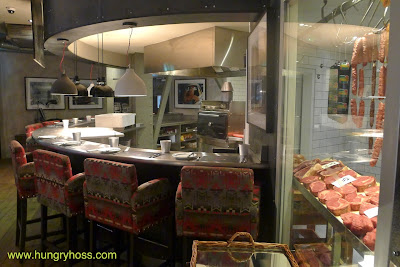 One major negative seemed to be the service - it was not the server’s fault as they didn’t stop rushing to and fro but there simply didn’t seem to enough of them on and their small number meant that food was sat on the pass; tables were taking a long time to be cleared and from my wife’s vantage, many walk in customers, gave up ‘waiting to be seated’ and instead walked over the road to Abode. 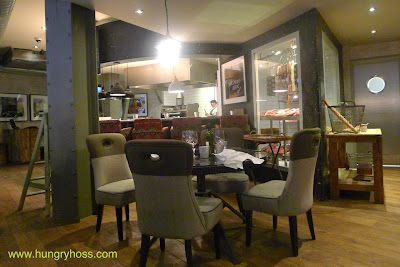 Our actual interactions with the polite and knowledgeable waiters were good. Thankfully, despite the fact they were wearing T-shirts bearing slogans such as ‘No Smoak Without Fire’, there was not a pair of ‘wacky’ badge laden braces in sight and they didn’t try too hard to ‘make friends’. Although they did fail to mention the ‘Specials Board’, which, as we happened to notice on our way out, was inconveniently displayed in the hotel’s foyer. 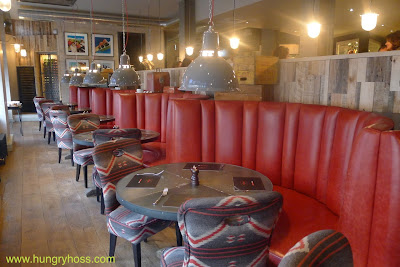 Despite these gripes, for us on the whole, the positives did far out way the negatives - namely: the comfy chairs, red leather booths and banquettes; the lighting and ambience, including the occasional heavenly waft of smoke as the door to the grill was opened; the open kitchen and glass butcher’s room / walk in chiller where you could check out the meat prior to ordering… and, bizarrely, I even quite enjoyed weeing into a bucket - I’m just glad no one came in as I was taking the pics (Yes, that does say pics) – and, let’s not forget, the biggest plus point of all… the food. 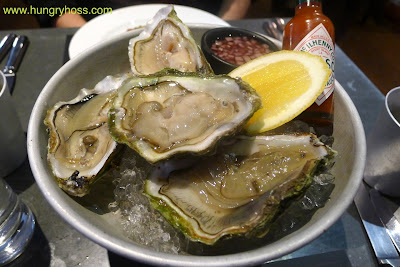 My wife and I, each chose to start with a couple of Cornish Oysters served with a mignonette sauce, lemon & Tabasco – far from the best we’ve had but perfectly enjoyable. 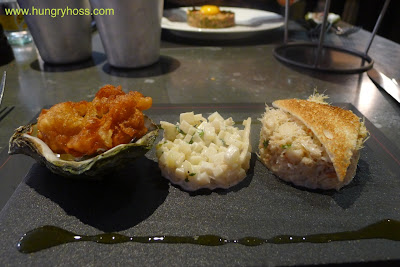 For my main starter, I selected the Potted Whitby Crab with deep fried oyster and sorrel potatoes – this dish was well put together and tasty. The crab was the star ably backed up by the textures and flavours of the fried oyster encased in a crisp golden batter and the fine crunchy dice of the sorrel potato salad. 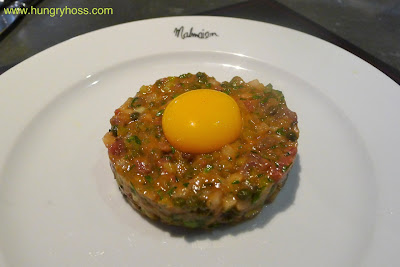 My wife’s choice was the Steak Tartare with egg yolk – I went in for a taste and was smitten. My wife saw how much I liked it and with a seemingly early Valentine’s Day like gesture kindly left me a good half  - easily the best thing I have eaten so far in 2012. 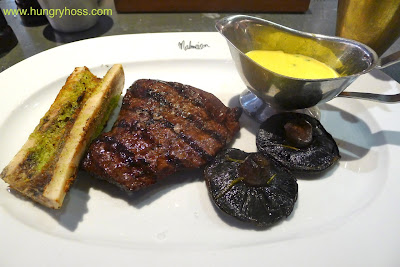 After perusing the menu and making a couple of trips to check out the cuts on offer in the window I decided to keep the oyster theme going by ordering the beautifully moist, tender and flavoursome Flat Iron Steak (known in the Antipodes as ‘oyster blade steak’) accompanied by a Béarnaise Sauce. The dinosaur leg of bone marrow and the hint of rosemary on the mushrooms were welcome touches but the cooking of the steak in the ‘indoor’ barbeque was rightly the best thing on the plate! 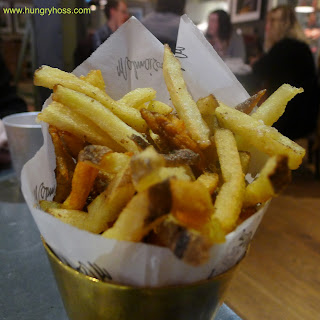 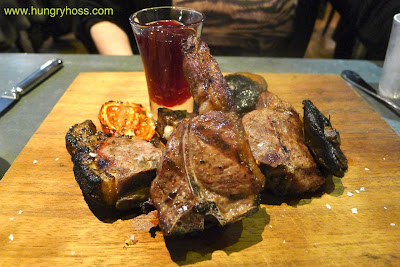 My wife selected the Josper Fired Lamb Cutlets with vine tomato, mushrooms & red currant jelly – again, perfectly cooked and fabulously flavoursome, with a side of Carrot and Swede Mash. 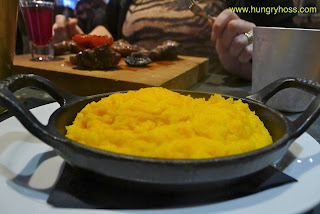 For dessert I chose the Artisan Cheese served with biscuits & chutney – pleasingly served with my favourite Fudge’s biscuits, the two stand out cheeses for me, were the Gloucestershire offerings, the velvety ‘Love Ewe’ and the fresh tasting ‘May Hill Green’ with its crushed nettle rind.

My wife was a little disappointed with her dessert – I talked her out of her first choice of Pineapple Panna Cotta by pointing out that the Banana Split came with a Cherry Cream – cream and cherries being two of her favourite things. As the picture attests, the ‘cherry cream’ transpired to be a handful of ‘glacé cherries’ with no cream in sight! To my mind, glacé cherries have no place on a dessert like this - they are fine in a cake but fresh cherries should have been used and some cream is expected when the wording clearly states ‘cherry cream’. 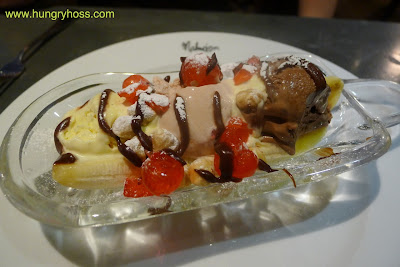 All in all – Smoak Bar and Grill serves top quality steaks and other grill favourites in comfortable surroundings in a great and easily accessible location, near Manchester’s main Piccadilly Station. I’ll be going back for the steak tartare alone!