Grill on the Edge

Last week, we visited Grill on the Edge - part of the Black House Group that also operate Manchester’s Grill on the Alley and the Smithfield Bar and Grill in London, among others. 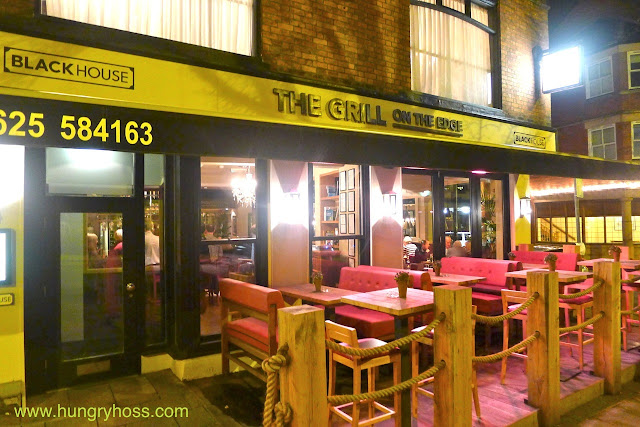 In a previous post ('The Alderley Restaurant’ at The Alderley Edge Hotel), I set myself the goal when writing about somewhere in Alderley Edge to not mention Premiership footballers and/or their WAGs. Sat across from us however, was the pair, arguably at the top of the Premiership celebrity couple league table - Wayne and Colleen Rooney! 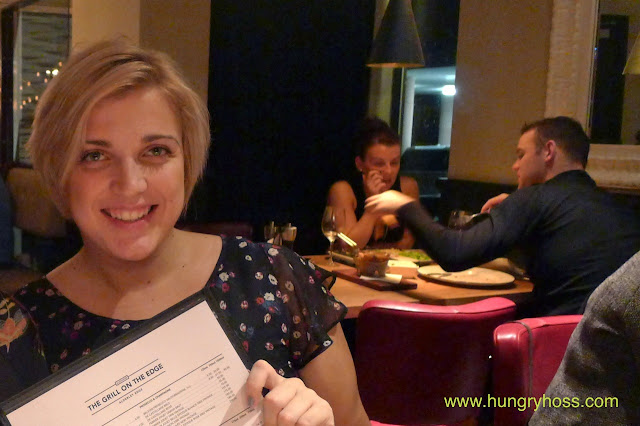 Wayne and Colleen are busy people and, as such, probably find it difficult making time to keep a blog of their foodie exploits. So, to save them the hassle I’ll write my first ‘by proxy’ review.

Wayne had a steak, which looked like it went down as well as Drogba in the penalty box. The fact that he left the chips, I’m sure, will please Tony Strudwick, Manchester United’s head of sports science and the man responsible for the players’ diets; as will the fact that they passed on desserts.

Colleen opted for the fajitas, washing them down with a couple of glasses of white wine. Wayne, of course, had a glass of ‘red’ (I wonder if City players drink Blue Curacao? Just a thought.)

Usually one to show off his heading skills, I won’t embarrass Man United’s leading goal scorer by mentioning the fact that he, much to Colleen’s amusement, banged his head on the low hanging light fittings as he stood up to leave. The couple both chatted to a few fans and admirers and seemed happy to pose for photos before they left. 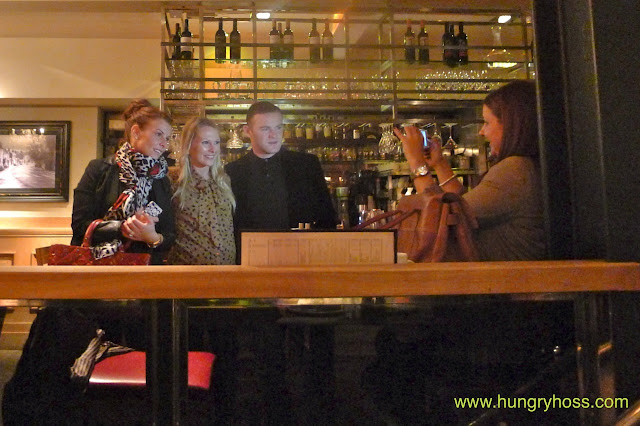 As the papped photos published in the next day’s Daily Mail proves, they certainly left with smiles on their faces. 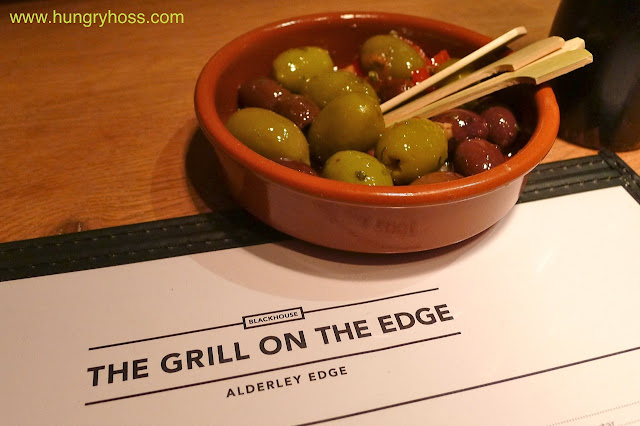 The fact that no one in my family had any Premiership matches to play in the immediate future; nutritionists to appease or upcoming photo shoots, we decided to indulge ourselves. Kicking things off with some Marinated Olives, Garlic Rub Bread and Warm Baked Loaf with salted butter. 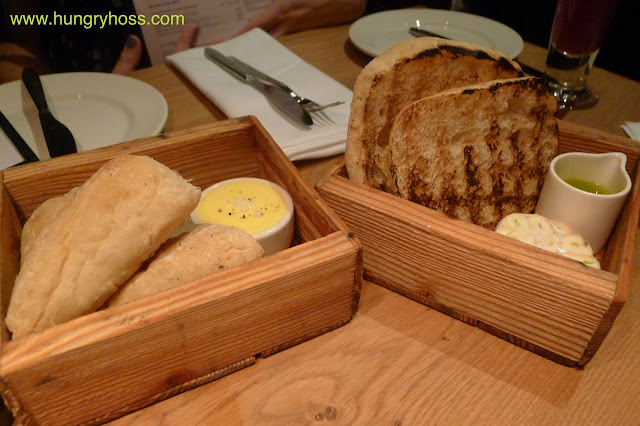 In the first half of the meal, my two stepdaughters opted for the Blackhouse Sharing Plate featuring fishcakes, salt & pepper chicken skewers, calamari and garlic king prawns. (The prawns were brought on as a substitute for the usual duck spring rolls, of which they were out.) 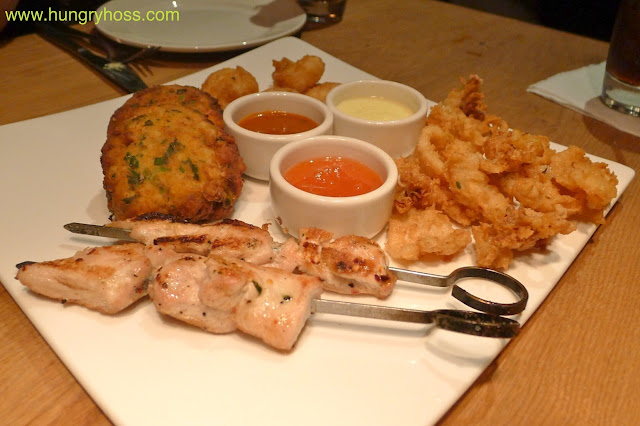 My wife and I scored with our choice of Beef Carpaccio with Watercress and Stilton Salad. Beef Carpaccio is typically served with Parmesan but the rich, nutty tang of the Stilton was a cause for celebration – back of the net! 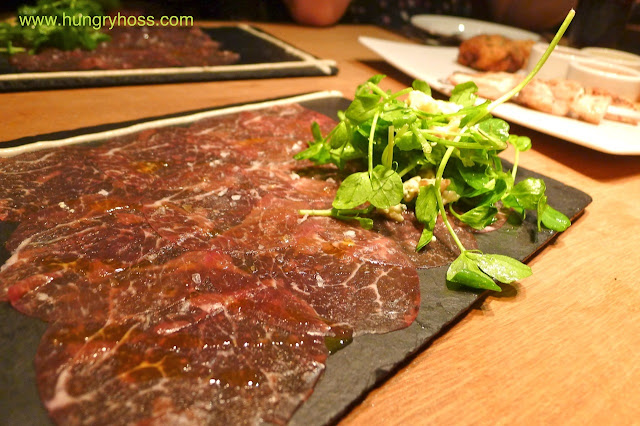 The second half of the meal got underway with my choice of a 310g. Rib Eye served with home-cut chips and a side of Field mushrooms with a Béarnaise sauce. The last time I had a dish similar to this was at Aiden Byrne’s British Grill (see here) – If Aiden’s was top of the league, this was mid table. 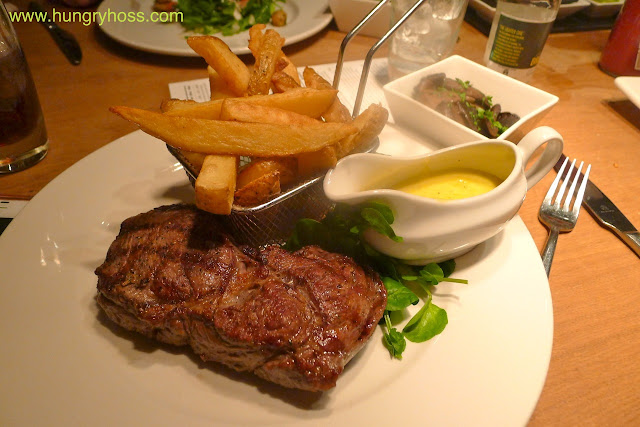 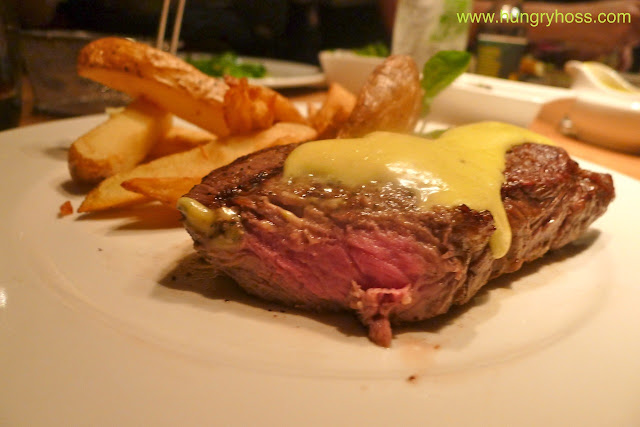 Like Colleen, one of my stepdaughters also went for Fajitas – choosing to have hers with Chicken Breast (other options included fillet steak or roasted vegetables). It all looked fresh and was beautifully presented. 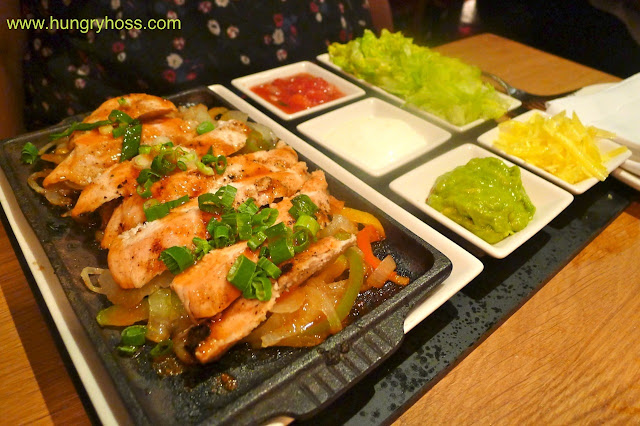 On my prompting, as she had never had Wagyu before, my other stepdaughter opted for the 100% Kobe Burger with home-cut chips and tomato relish. Priced at £8 more than then the 100% premium beef option, she commented that it was a good burger but she didn’t think it was necessarily worth the extra. 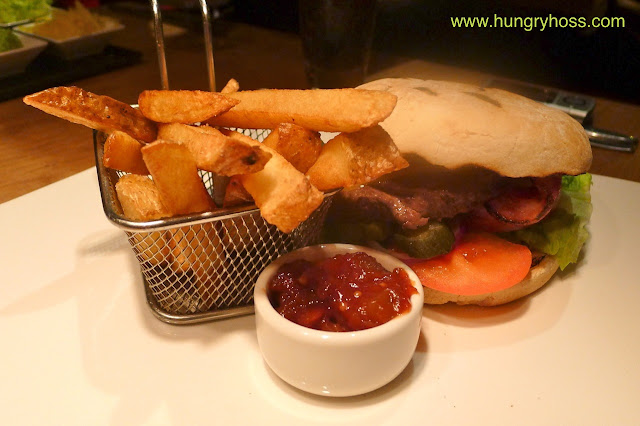 Doing the best out of all of us to stick to our January diets, my wife decided upon a salad of Baby scallops sautéed in garlic with bacon with a side of Savoy cabbage. 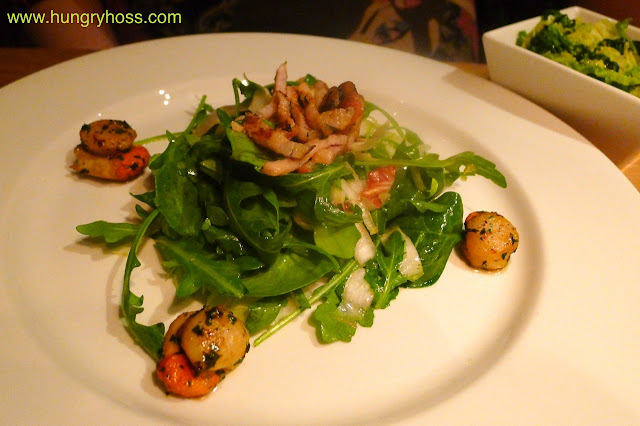 There was no extra time as following the Rooney’s good example, we too passed on dessert – you never know, that photo shoot or England call up could be just around the corner!