One of my key reasons for starting this blog was to share dining ‘experiences’ and not to just write about what I stuff into my cake hole.

There are a few places where I have eaten phenomenal food but have not enjoyed the overall experience for other reasons – an example that springs to mind being the two-starred Pied à Terre where, in my opinion, Shane Osborn’s magnificent food was let down by the cramped dining room.

On the flipside, at restaurants such as Pierre Gagnaire’s Sketch, the décor and overall ambience seem to augment the already amazing food; which elevates the meal from more than just an amazing meal, to an amazing ‘dining experience.’

Reflecting then, on some of my favourite places at which I have eaten, they have always offered something a little extra - a certain ‘je ne sais quoi’ that makes them special and stand out from the crowd.

For example, when eating at The Fat Duck, I had such high expectations, I was a little worried that I would leave disappointed.  As it turned out, my expectations were exceeded as the food was otherworldly and somehow seemed enhanced by an inner excitement - whether I had become with infected with a passion having seen these dishes created so enthusiastically and skillfully by Heston on television; or due to a knowledge that I was dining at a place consistently ranked among the world’s best or simply because of the creativity of presentation and mindboggling molecular techniques.

Another amazing experience comes for other reasons - at David Chang’s Momofuku Ko exclusivity and the hype surrounding it, is the key. The booking procedure is essentially a lottery; even Obama failed to secure a reservation when in town. Rocking up at the lowkey black shuttered venue, with the small Momofuku (Lucky peach) logo on the door being the only clue that you are about to join an exclusive club whose members are those lucky enough to have eaten at Ko – that’s before you even start to consider the amazing and indulgent food, such as the legendary Shaved Foie Gras With Riesling Gelée & Pine Nut Brittle.

The theatre of Sir Blumenthal and the modish mastery of His Royal Coolness, David Chang aside, other restaurants stand out for their class, their pedigree and their regal majesty. One such place is the Roux bastion that is Le Gavroche – here the amazing artworks, Roux history and plush grandeur in the heart of Mayfair makes for a experience were you can’t help but feel like you are dining among kings.

With this in mind, Fraiche – a one starred establishment, not in trendy New York, leafy Bray or royal Mayfair but in the northern industrial town of Birkenhead (albeit in Oxton Village, which, in Victorian times, was one of the more affluent spots in the North West as the home to many wealthy Liverpudlian merchants).

Some people may think I am over gilding the lily by comparing the admittedly excellent but one starred Fraiche to the two starred Ko and Gavroche and the three starred Fat Duck – but let me explain.

Like Heston, chef / proprietor Marc Wilkinson creates exciting flavoursome dishes using many molecular principles and techniques - although, unlike Heston, with his brigade of thousands, he does this alone in the kitchen. This ‘one man band’ approach makes Marc stand out. You know he has thought about, cared for and cooked every detail of your meal, a truly rare thing in a modern Michelin kitchen.

Fraiche’s food may be progressive in many ways, but the dishes are grounded in Marc’s classical French training, which he received at places such as the Chester Grosvenor and under the legendary Germain Schwab at the two-starred Winteringham Fields. Reading Marc’s bio on his website (www.restaurantfraiche.com) you will discover that the scientific approach was largely self taught from books such as Hervé This’ Molecular Gastronomy Exploring the Science of Flavour and from talking culinary trips and even stages in some of the world best restaurants including elBulli and El Celler de Can Roca.

Both David Chang and Marc Wilkinson base their business models on exclusivity. Ko serves two sittings of twelve covers a night, Fraiche an average of just eight lucky diners – even though Marc’s booking policy is nowhere near as extreme as Chang’s, you will often struggle to secure a table even with three or four months notice. Their restaurants share an ‘underground’ feel; fostered through stark black exteriors revealing little clue as to the culinary mastery that is housed within. 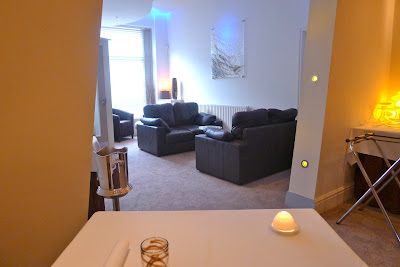 Once across Fraiche’s threshold the comparison to places such as, Le Gavroche becomes more apparent - whilst the Fraiche interior is much more modern, it retains a classic comfort that it shares with the Roux chef-d'oeuvre. The plush suede and leather seats in a variety of creams and umbers make for a calming atmosphere. The chilled soundtrack featuring the likes of Michael Bublé, Norah Jones and Eva Cassidy add to the overall ambience. 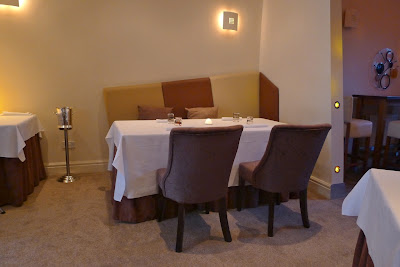 Ok, so Fraiche does not have the history and the original Miró, Dalí and Picasso artworks on the walls that Le Gavroche has; but what it does have is a dining room that like art affects your whole mood and being. Picasso once said, “Art washes away from the soul the dust of everyday life.” for me, Fraiche also does this - when I am sat in that extraordinary dining room with my wife, eating Marc’s visionary food, I feel so special, so relaxed and so in love. 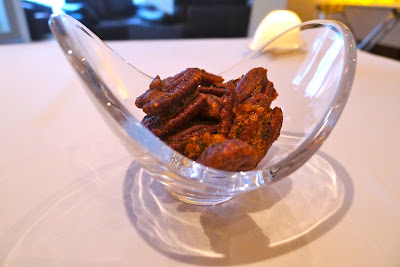 The young front of house duo are majestically unassuming, the food seeming to apparate before your eyes. The first dish to ‘appear’ was a small bowl of Spiced Pecans – a Fraiche favourite. Along with an aperitif of one of Fraiche’s excellent Sherries, these subtly spiced nuts are always a great way to start a meal. What is more, they are one of the few of Marc’s dishes that anyone can easily attempt to reproduce at home. (Find a recipe online, cook up a batch and wow your guests at your next dinner party – if they last that long!) 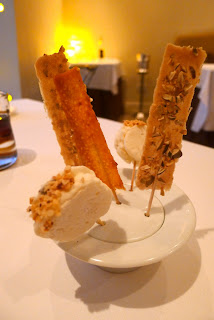 Next up, some more creative and playful amuse bouches - Parmesan Ice Cream with Hazelnuts, Spiced Sesame Seed Lolly and a Pumpkin Seed Lolly. Savoury ice creams are becoming ever more popular, with Heston even selling one through his Waitrose range and as I have said before, I do like food on a stick! 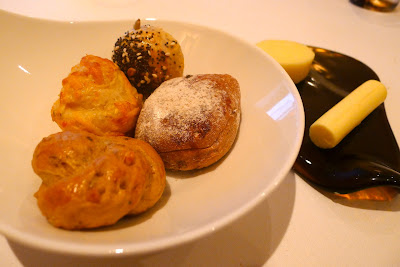 Marc’s breads are always amazing and are generally served with a choice of butters, an unsalted and one with Hawaiian red salt. The first four (of the eight different bread we were served) were: Cheese, Granary & Treacle, Mixed Seed and Five Nut - the Granary & Treacle one being my favourite. 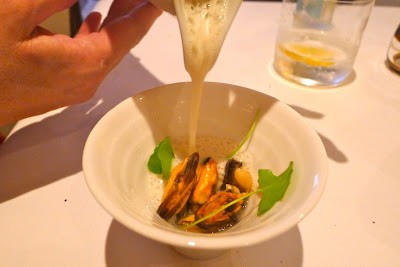 The fish starter was a real winner for me, Mussels with a Cauliflower Velouté. The combination of flavours and textures were typically creative, including a tropical hint of passion fruit in the form of a jelly, nestled beneath the plump mussels. The cauliflower velouté was served at a pleasingly hot temperature. The Sorrel Buckler Leaf (a new one on me) was delightfully citrusy - I have even ordered some seeds online to have a go at growing my own. 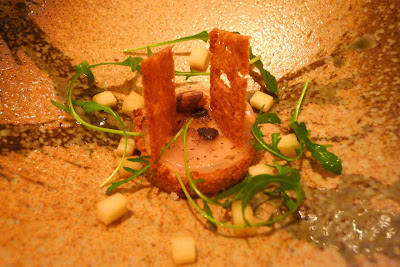 Following the mussels was Foie Gras with Yuzu and Apple – a beautifully assembled dish, served in attractively glazed Japanese stoneware bowls. Even though I happily eat it, Foie gras is not a favourite of mine but this, flavoured with yuzu was sublime. (Yuzu is an Asian citrus fruit with a subtle sour flavour, similar to, but more delicate than a grapefruit.) The new season apples added a fresh sweetness and crisp crunch. 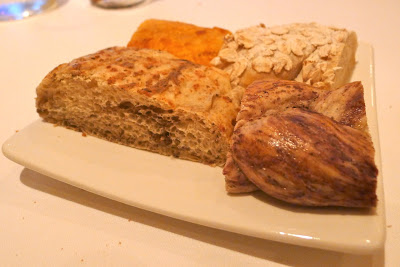 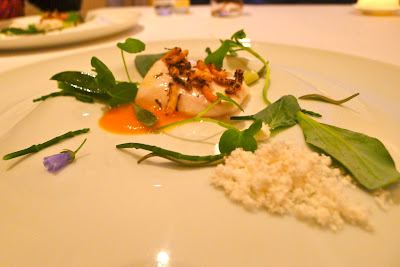 The fish main was Lemon Sole. Served with Wild Rice, Oyster Leaf, Oyster Flower, Sea Buckthorn, Sea Aster and Samphire – Marc often uses the spiced puffed wild rice to cleverly season and add texture to his fish dishes. Sea buckthorn is becoming more popular on menus; this versatile tart berry can be used in desserts or to add a punch of flavour to savoury dishes, such as this. They’re healthy too! The oyster plant that provides the amazingly flavoured leaves, reminiscent of their molluscy namesake is something that I have had a few times before, although this was my first time eating the delicate, delicately flavoured flowers. 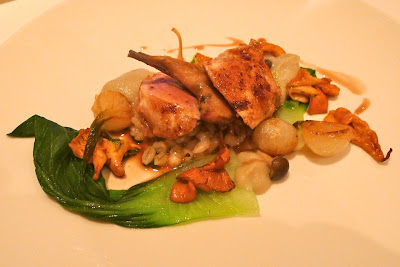 Many of us may be bemoaning the weather in a vain attempt to cling onto summer, but autumn is here and the main meat dish was the charmingly autumnal, Roasted Quail served with Artichoke Purée and Barley. I have recently ‘got into’ barley - as a nation, we are ranked among the top ten barley producers in the world but rarely seem to use it in its whole grain form (preferring to drink it in beer or whisky, perhaps?) Girolles and Shimeji Mushrooms and roasted Grelots completed the dish. 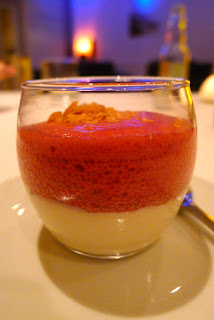 On our past couple of visits to Fraiche, the Lemongrass & Vanilla Panna Cotta with Sour Cherry pre dessert has been sadly absent from the menu; but now, due to popular demand, it has made a welcome return! I’m guessing just as a singer like Chris De Burgh is eternally duty bound to sing his hit song The Lady In Red, some chefs are always expected to cook their fabled dishes - Pierre Koffmann with his Pig's Trotters and perhaps now Marc Wilkinson with this tartly, zingy decadent pot of cherry and lemongrass bliss! 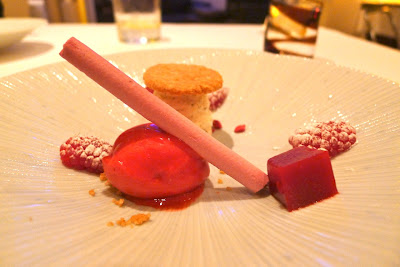 Making use of some delicious late summer raspberries the dessert of Vanilla Mouse with Fresh Raspberries, Raspberry Jelly, Raspberry Sorbet and Berry Meringue was a vibrant work of art. The full on flavours of the sorbet and jelly were simply divine. 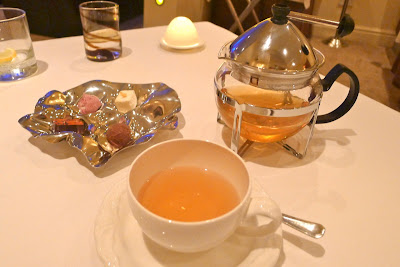 I love my tea and Fraiche always has an interesting selection of coffee, teas and tisanes. Normally going for the Japanese Sencha, I opted for a change and decided upon a Jasmine Chung Hao – a heavily scented jasmine tea that stood up well to the accompanying petit fours, featuring a Passion Fruit Marshmallow, Peanut Butter Ice Cream Bob-bon, a Berry Meringue and a Mediterranean Orange Chocolate.

So there we have it, an account of my latest visit to Marc Wilkinson’s most special and singular of restaurants - hopefully showing why Fraiche consistently ranks in among my favourite ‘dining experiences’ – a remarkable restaurant from a remarkable chef.