As I sat down to write about Volta, a tweet from @caterertweets popped up on my timeline stating how two-Michelin starred chef Nathan Outlaw had joined the likes of Mark Sargeant and Marcus Wareing to say that people are fed up of “fine dining”.

In Paris, in the 90’s, there began what many considered a backlash against the ‘formal’ and ‘stuffier’ restaurants. Many of the city’s top chefs and brightest young talents began to open places considered ‘small’ ‘casual’ and ‘hip’. The resulting ‘movement’, due to a portmanteau of bistro and gastronomy, became known as ‘Bistronomie’. 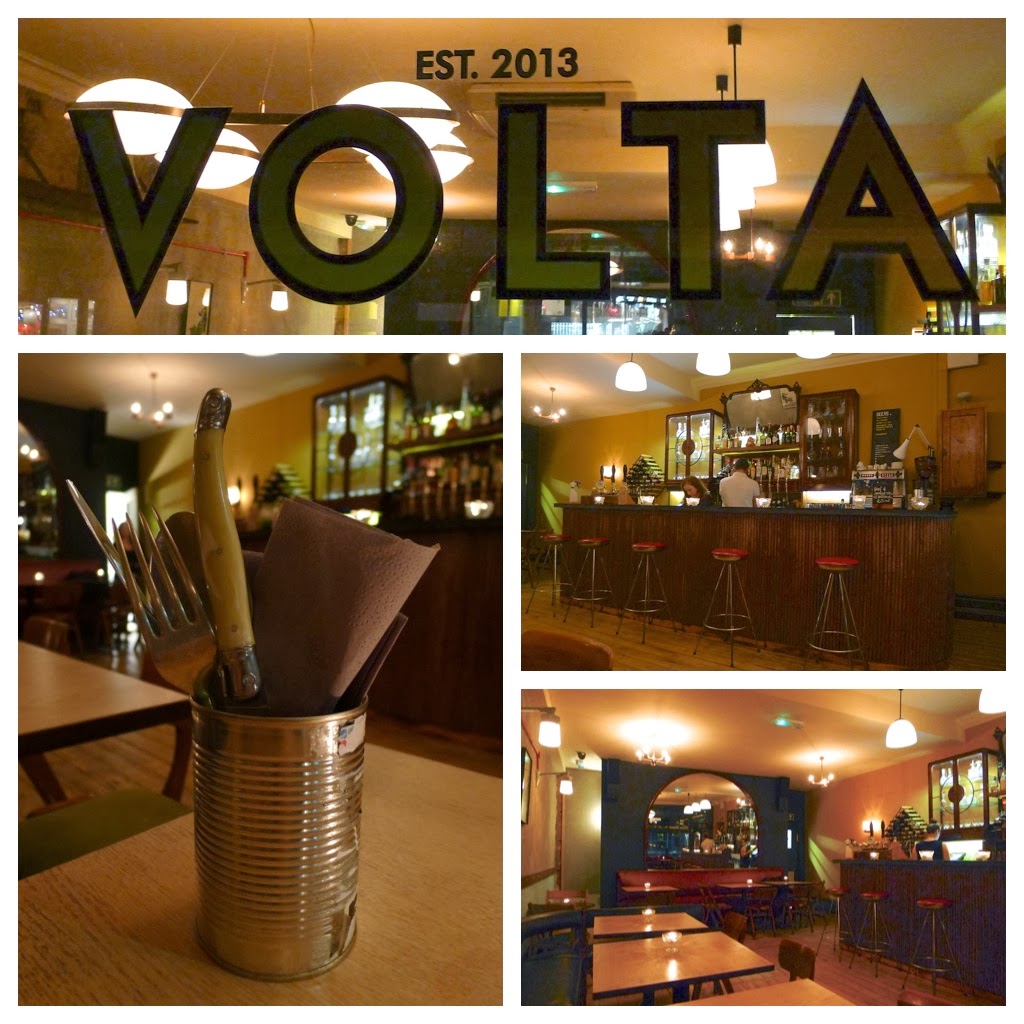 Today, ‘bistronomiques’ such as Le Chateaubriand and Septime rank at 18th and 49th respectively in The World’s 50 Best Restaurants and the likes of Vivant, Saturne, Frenchie and Le Baratin are amongst the hottest and most exciting places to eat in the city.

Some twenty years later, London has started to catch up as Marcus Wareing plans to relaunch as a bistro in the hopes of joining the capital’s trendier places like The Clove Club and Bubbledogs.

Correct me if I am wrong but hasn’t Manchester always been ‘anti fine dining? Perhaps it is no surprise that London and Paris are now copying the city that gave birth to the industrial age and modern computing? 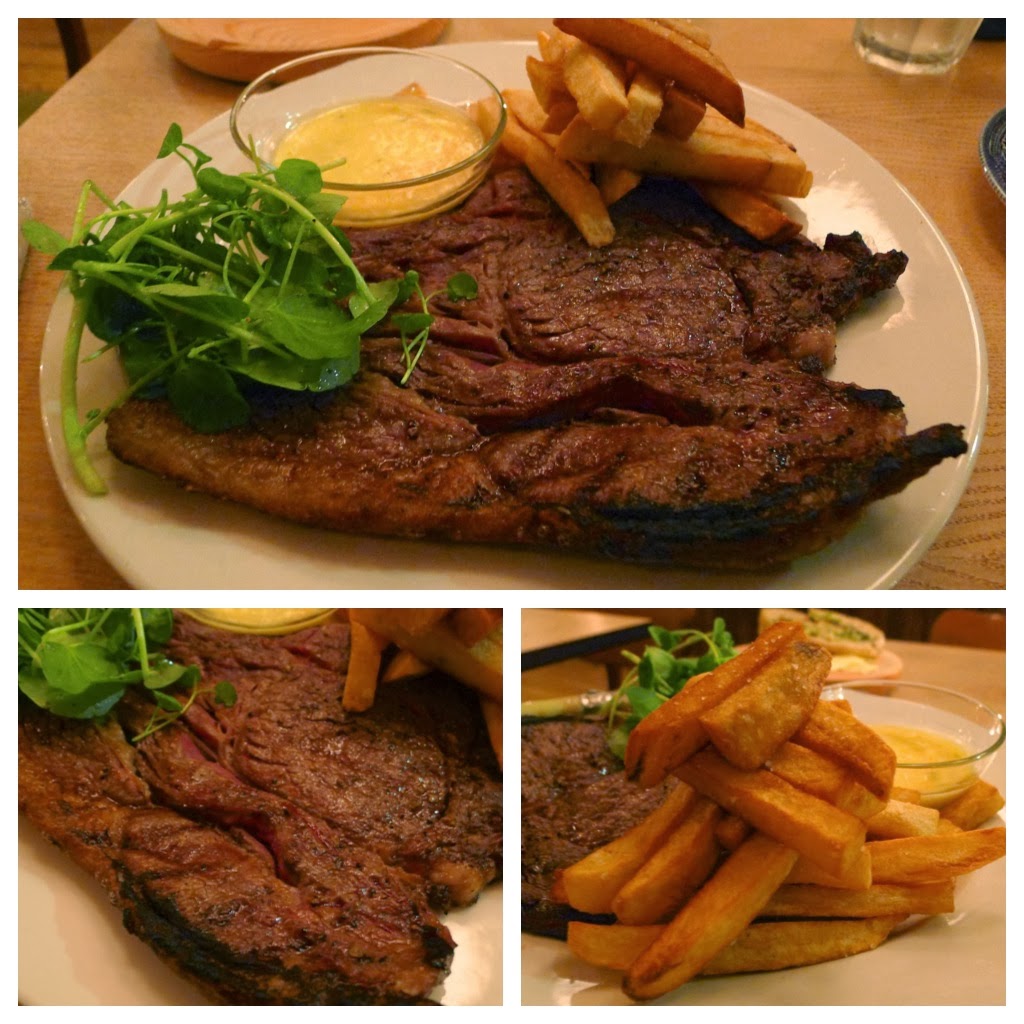 Whilst the aforementioned places may have a greater pedigree and emphasis on food, Volta is the latest opening in Manchester that demonstrates the city’s independent and love of all that is ‘small’ ‘casual’ and ‘hip’.

I’ve visited Volta twice - both times in the evening, arriving soon after they open at 5pm. The dark candlelit room, although not ideal for food photography, creates a great atmosphere. Owned by DJ duo Justin Crawford and Luke Cowdrey (aka The Unabombers), the soundtrack is "dope" (Sorry, posted this whilst watching The Voice.)

The menu has three main sections ‘Bread, Meat & Cheeses’ ‘Small Plates’ and ‘Chargrill’ - there is a dessert section too and daily specials. 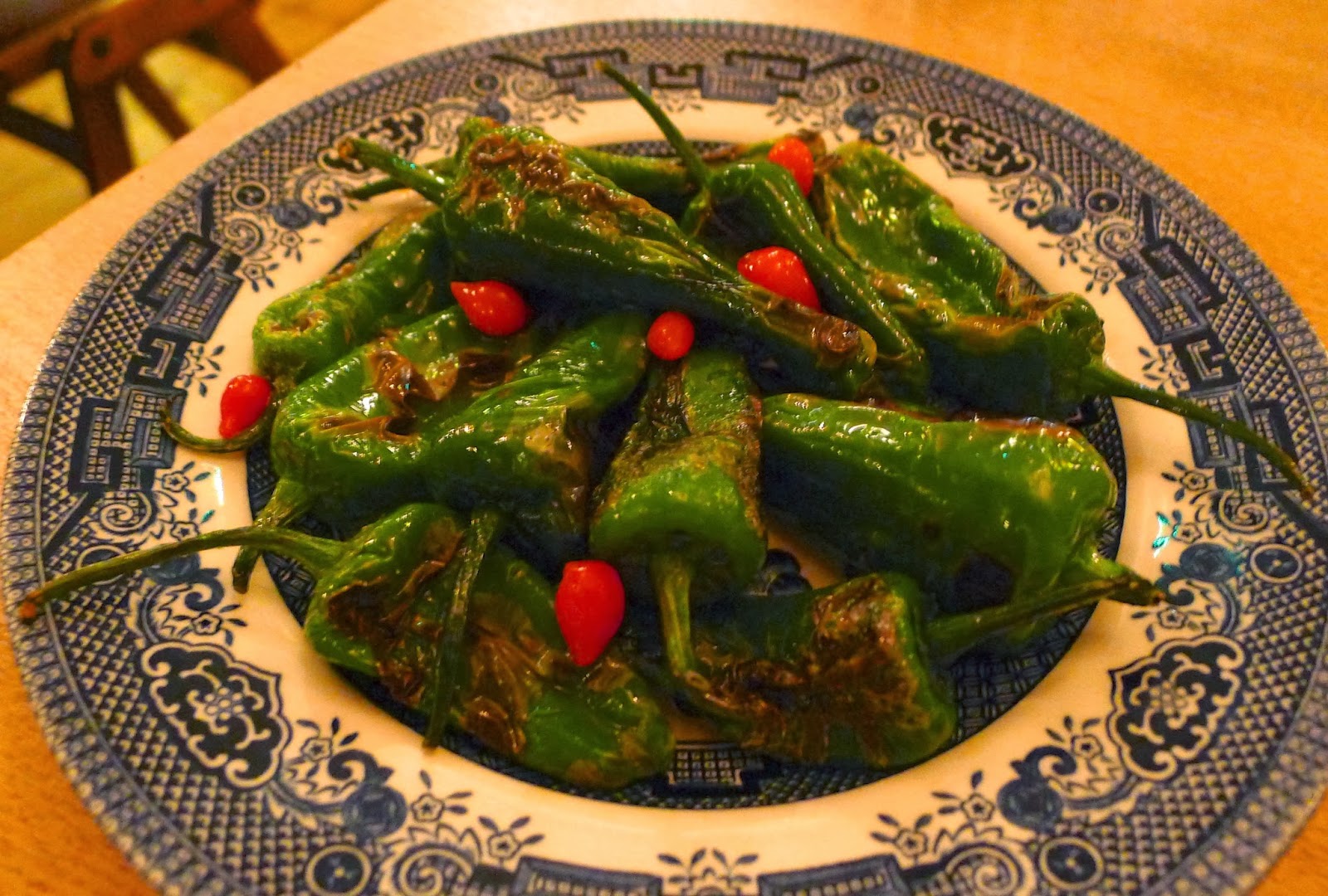 Padrón peppers – served with some interesting little teardrop chillies (I’m unsure of the variety). Famously, the spiciness of Padrón peppers is a Russian roulette affair; quite a few of these packed a fiery punch. 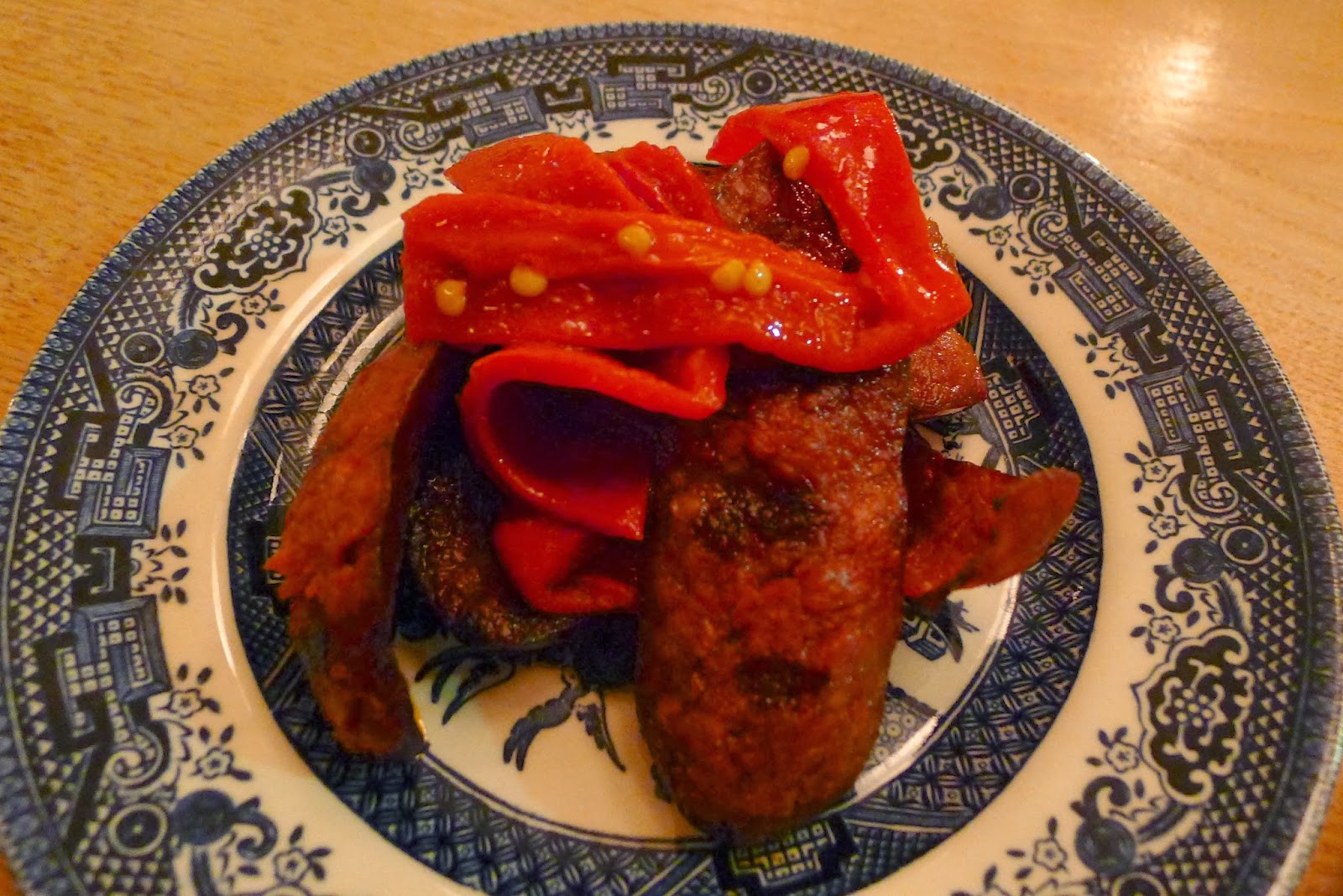 Chorizo, piquillo peppers – a delightfully simple dish bursting with Spanish flavours. I particularly liked the way the chorizo had been cut into long strips. 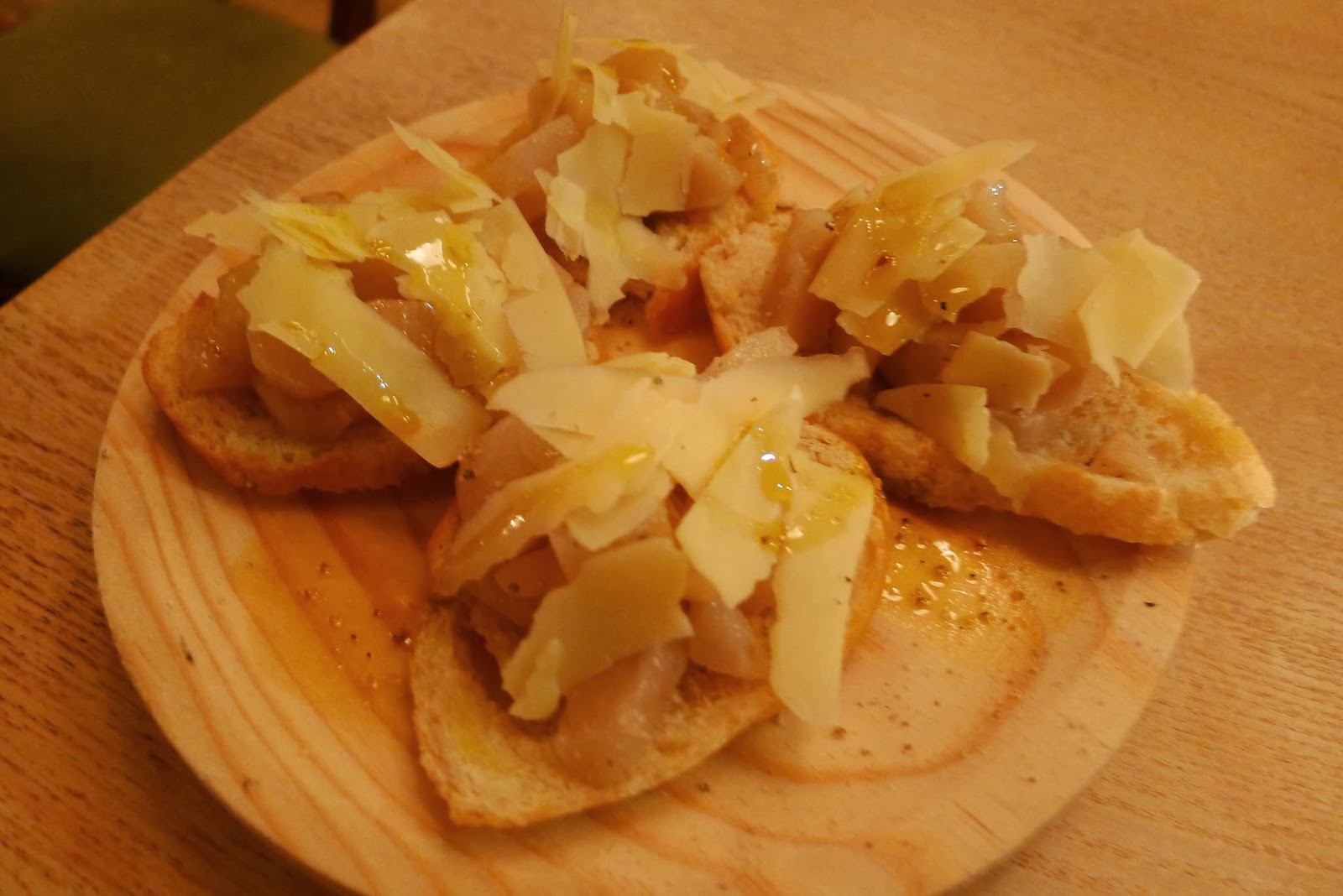 Jerusalem artichoke, truffle & pecorino toasts – a beautiful subtly flavoured dish; the truffle and pecorino did not overpower the artichoke. 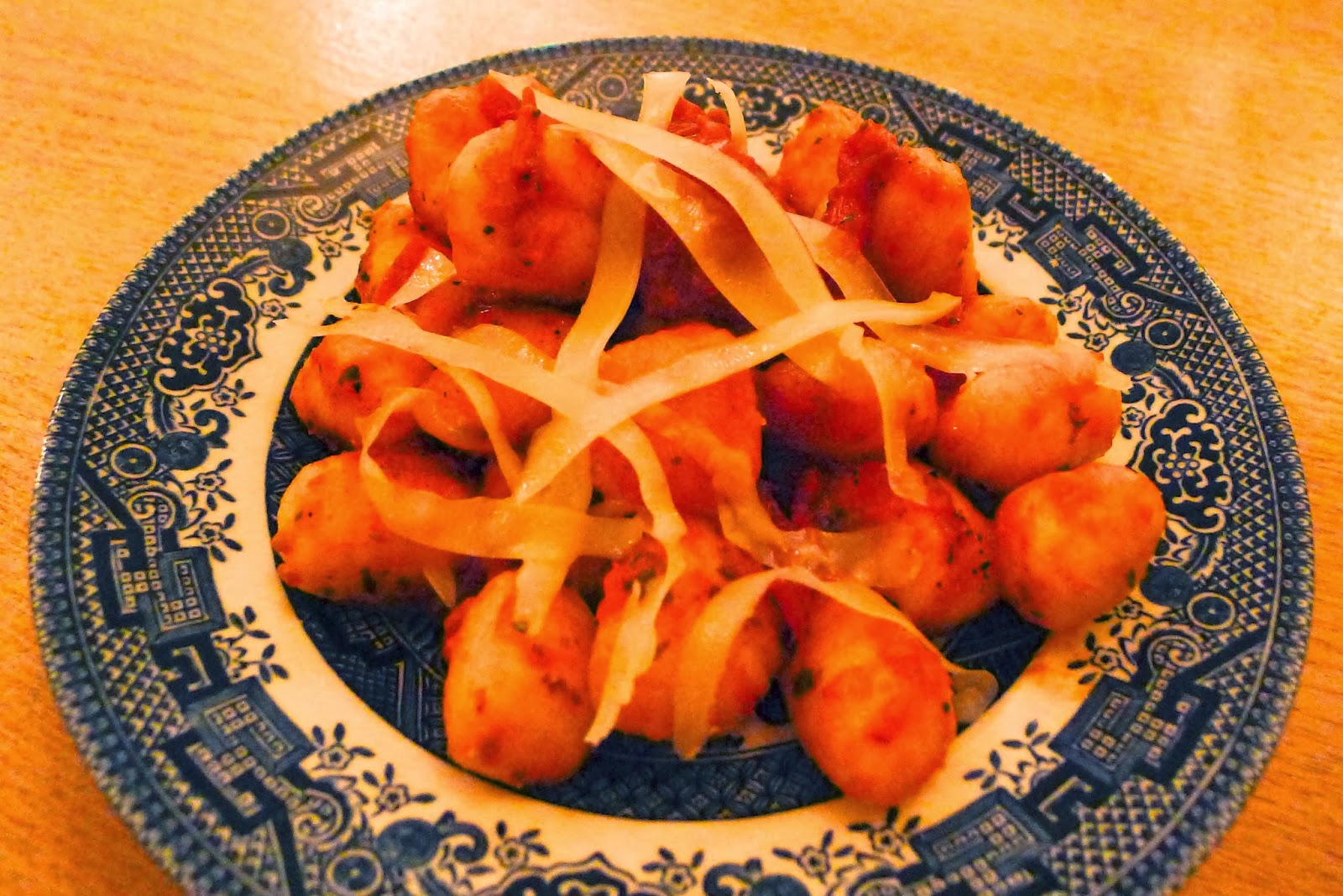 Potato gnocchi – not the best gnocchi I’ve had (they were a little rubbery) but the tomato sauce was good. 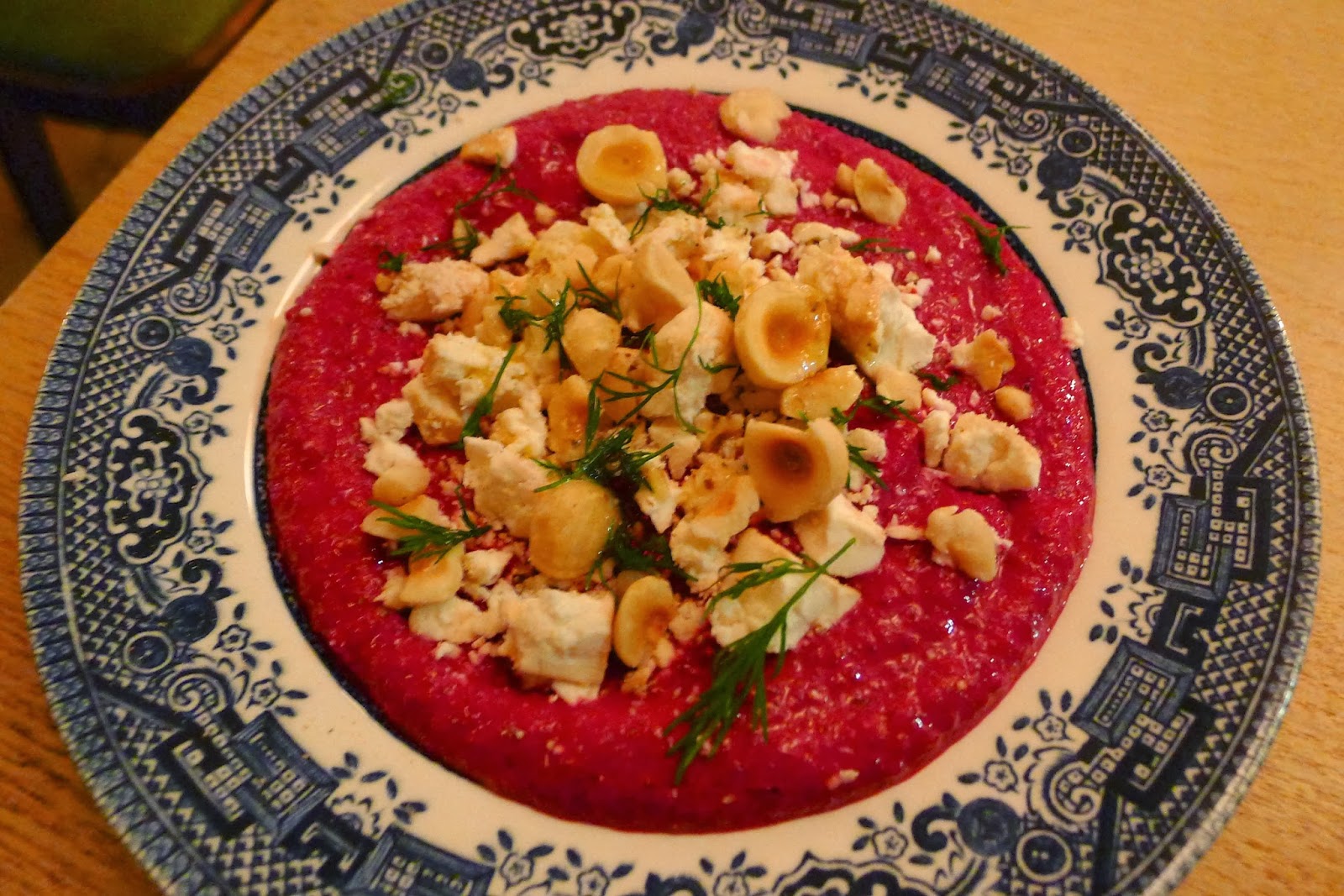 Smoked feta, beetroot, hazelnuts – a lovely dish, I’d suggest ordering bread too as it was a little strange eating it with a fork. 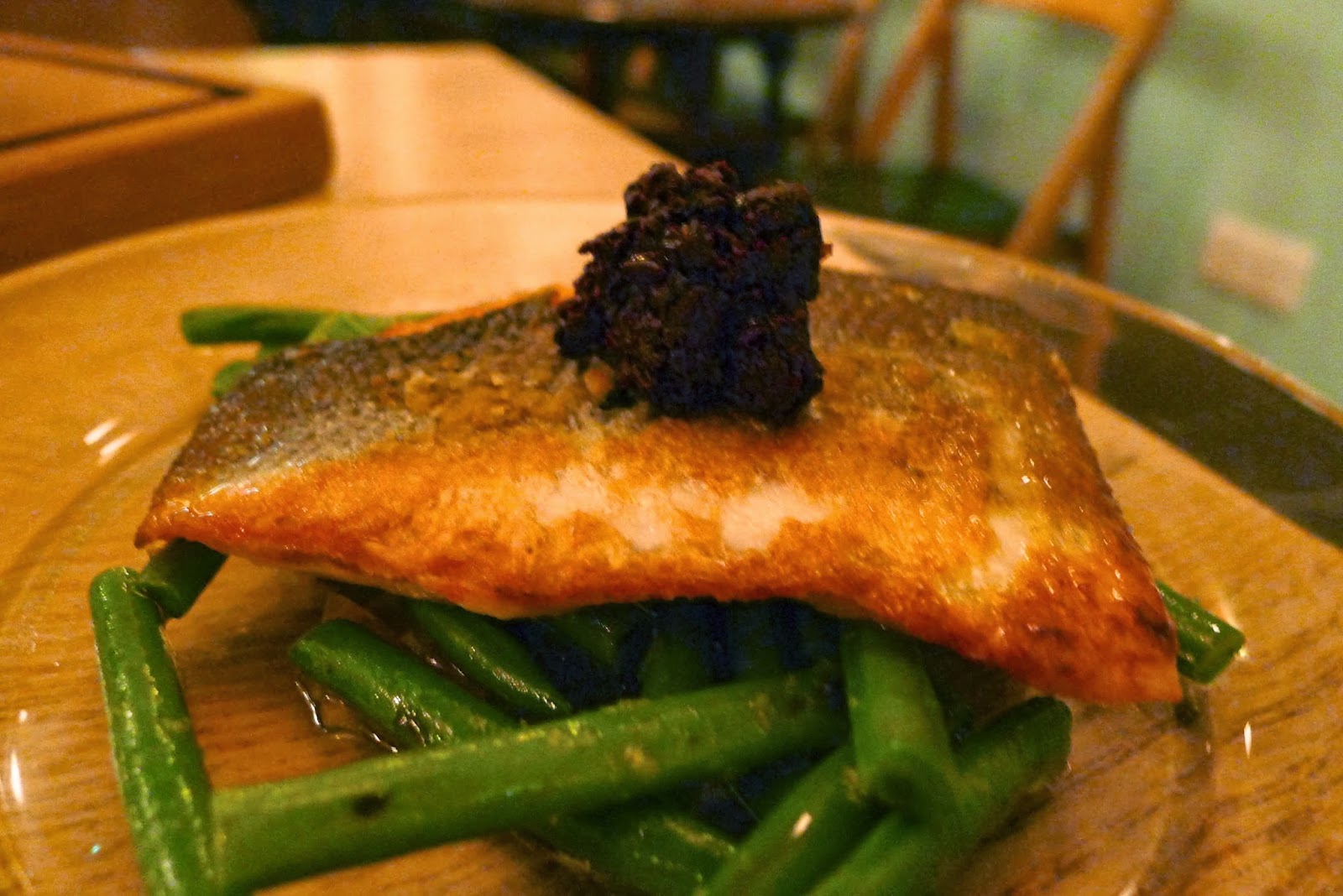 Sea bass, fine beans, black olive & English rapeseed oil – I enjoyed this, a nicely piece of crispy skinned bass that well with the beans and tapenade. 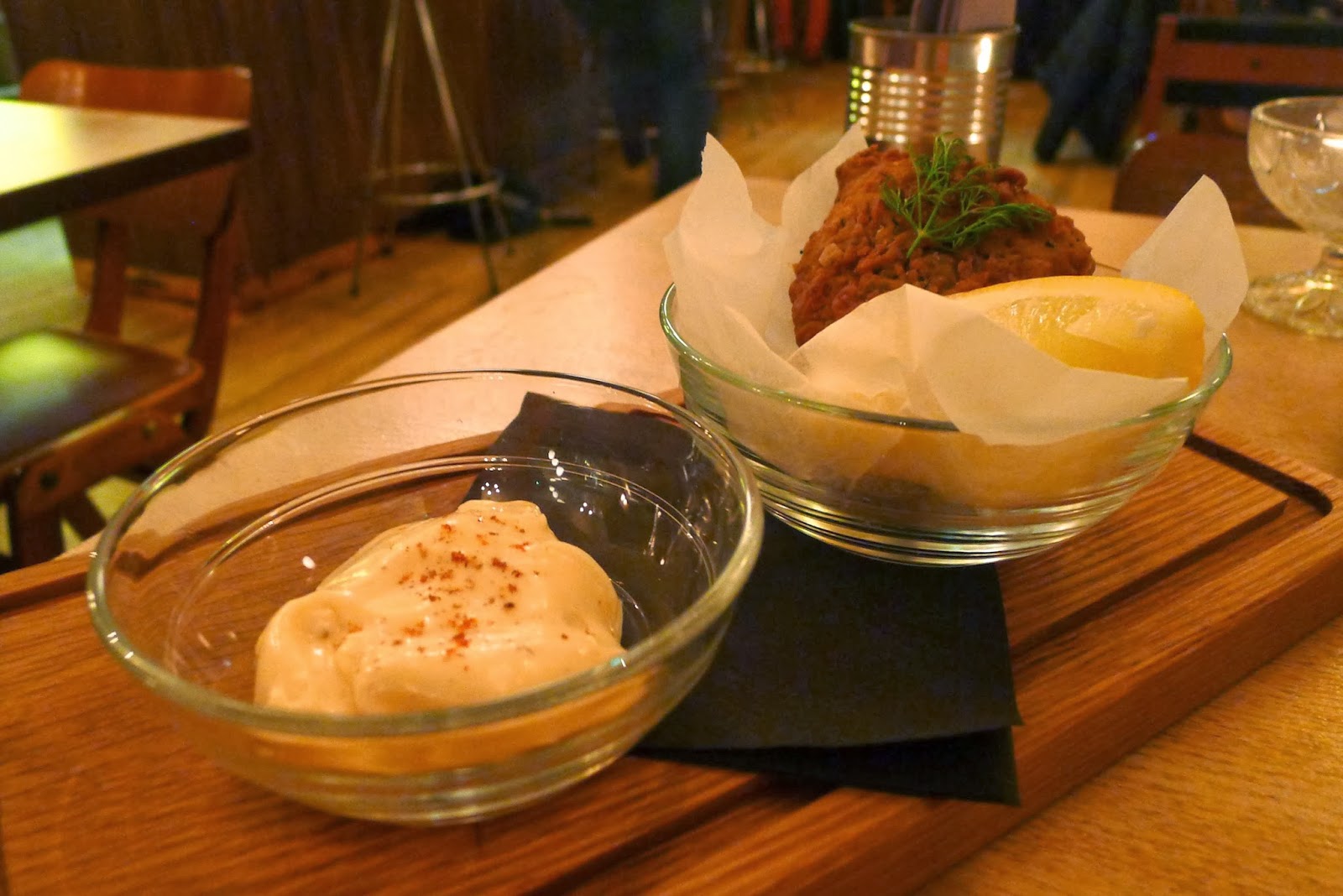 ‘Kentucky Fried’ Rabbit with aioli & lemon – this was one of the daily specials. They should really consider serving it in buckets. 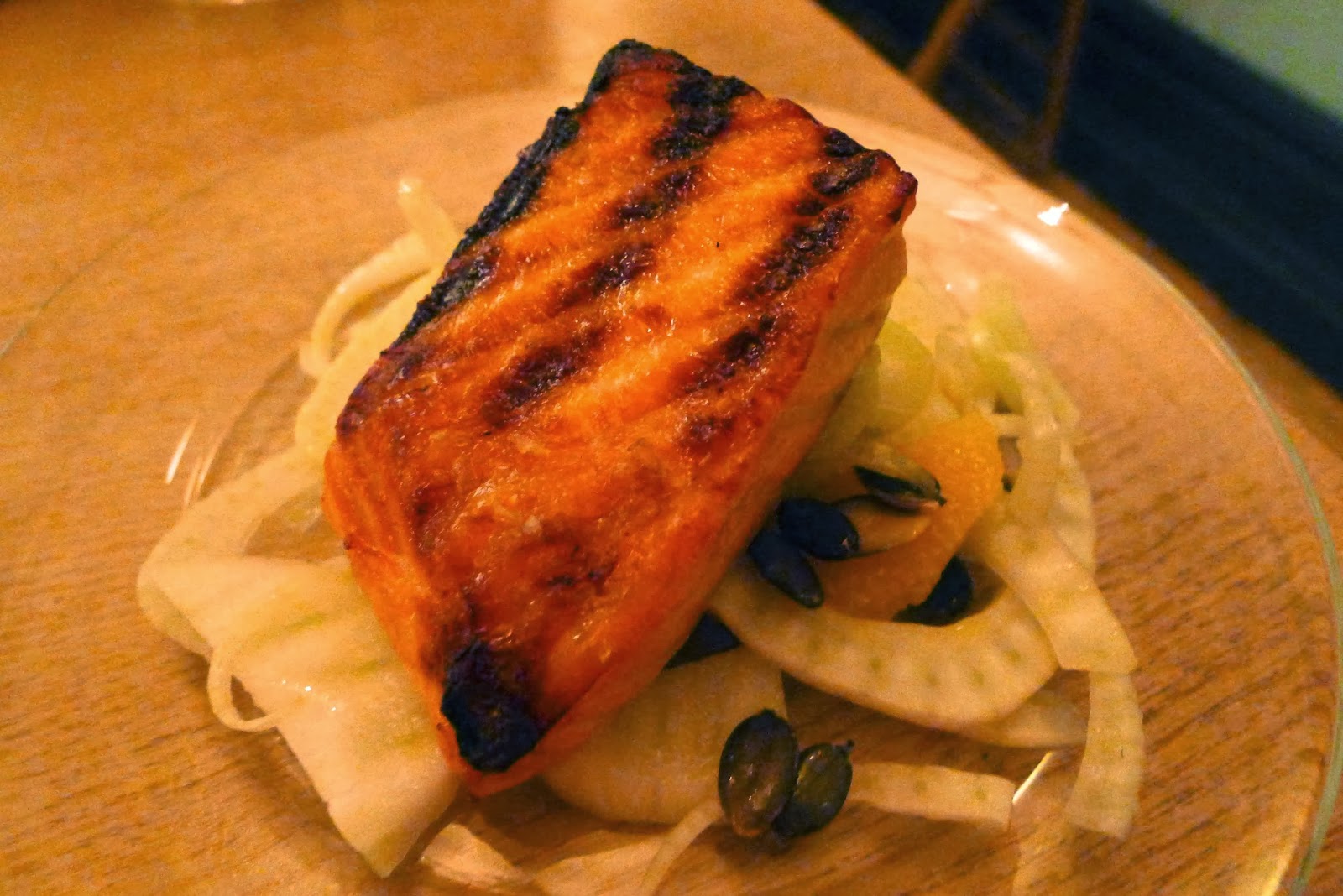 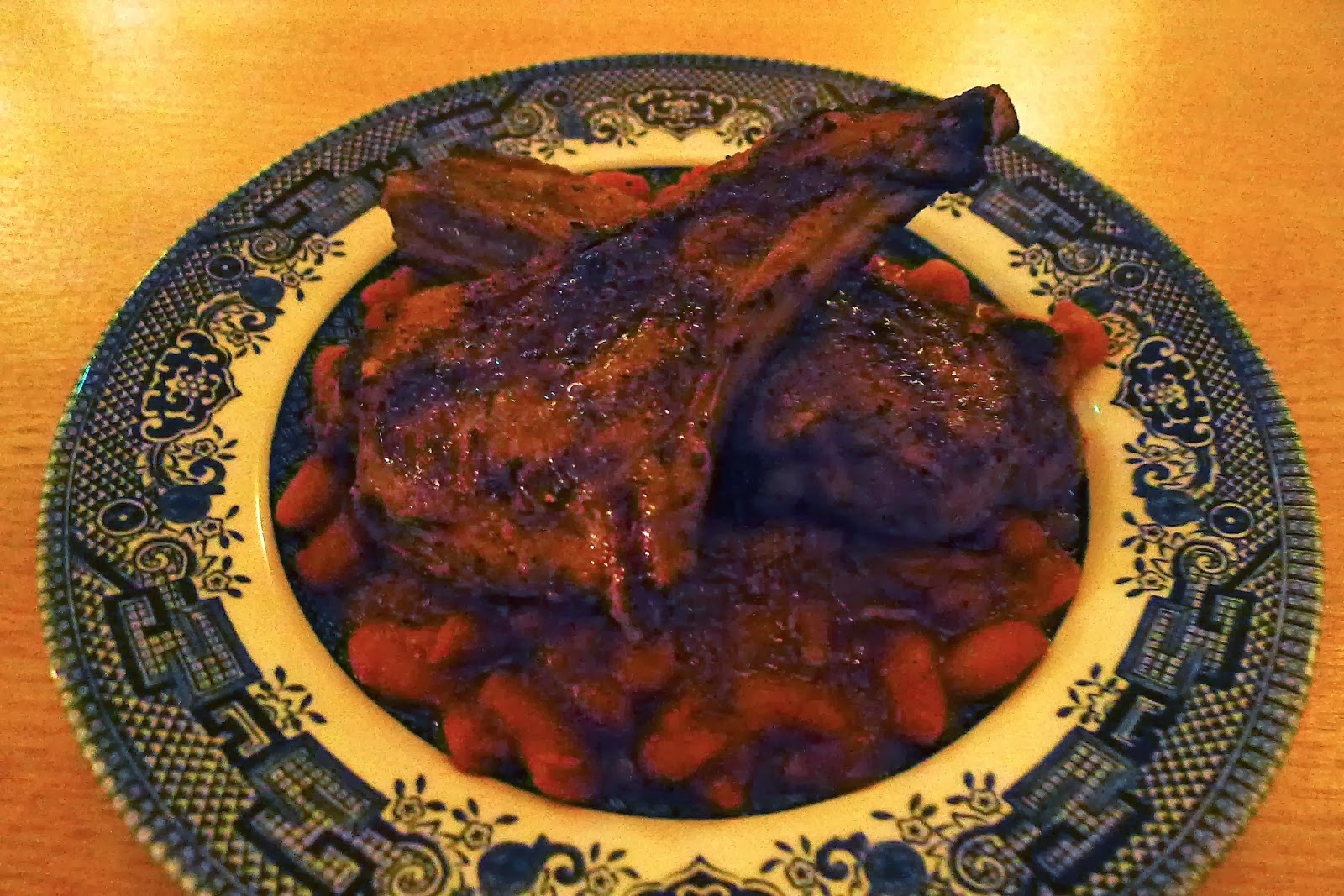 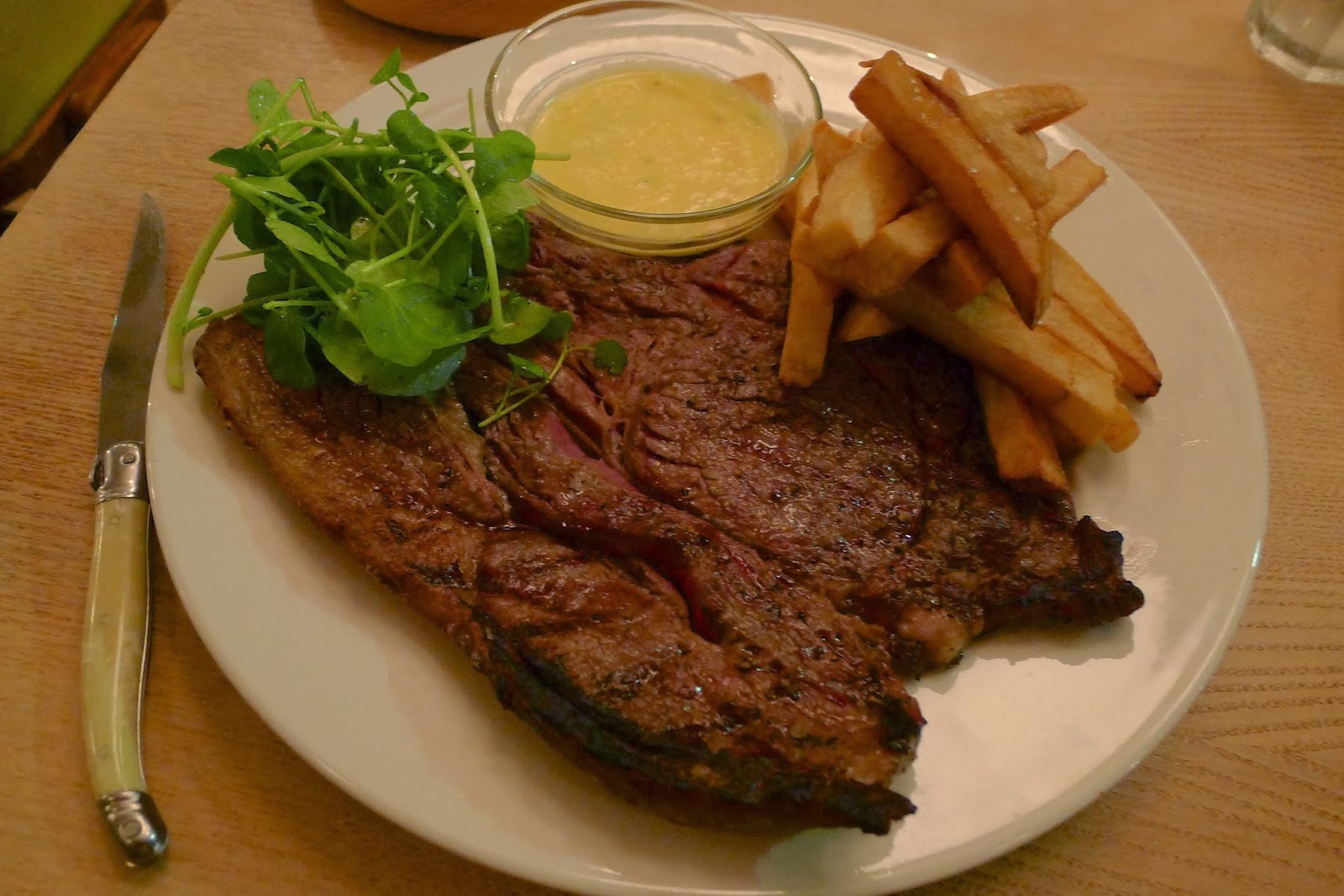 Dexter Rib on the bone (350g) with chips, watercress & béarnaise – I rarely comment on the cost of dishes but at £19.50 it’s worth mentioning that this is excellent value for a quality steak; possibly the best value steak in Manchester? Tell me if you know otherwise.

Service was swift. I think as the menu continues to develop this is going to be a great addition to the West Didsbury drinking and dining scene… unless of course, Mancunians suddenly decide they want started white tablecloths and silver service.