2014 is set to be another big year for the realm of Rogan – the talented @MrTickler (chef Kevin Tickle) has taken over the helm at Rogan & Co and, in what could well be the capital’s biggest restaurant launch of the year, Simon Rogan at Claridge’s will happen in March.

In addition, the hope is Michelin will catch up with everyone else and concede that L’Enclume and The French are each currently short one of their stars – I say this on the basis of having enjoyed several consistently excellent meals at both restaurants last year. I’ve picked up where I left off… and so have The French: 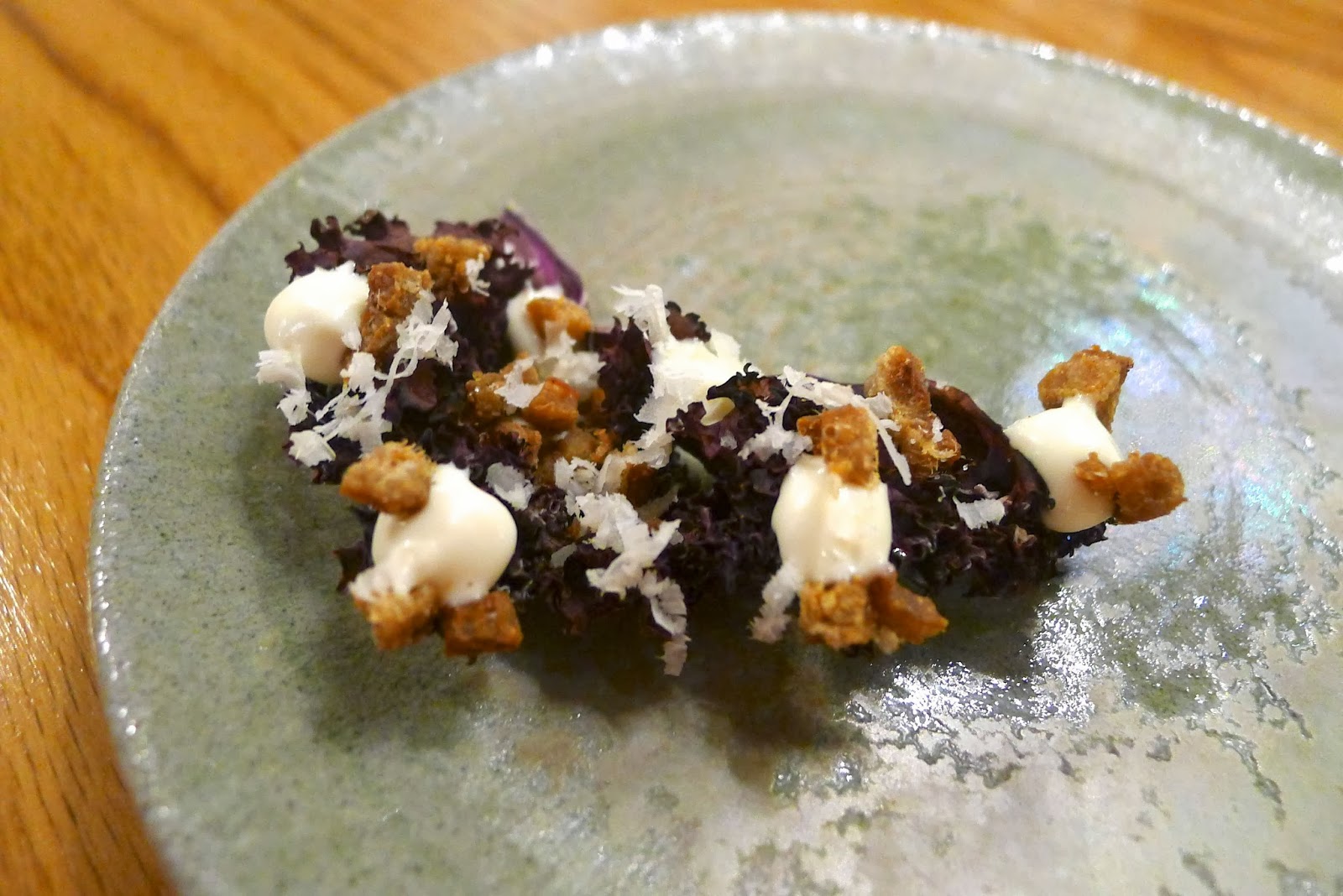 Crispy kale, duck scratchings, horseradish – I’ve had a few incarnations of this appetiser now; this one, with the duck scratchings in lieu of chicken, was the best yet. 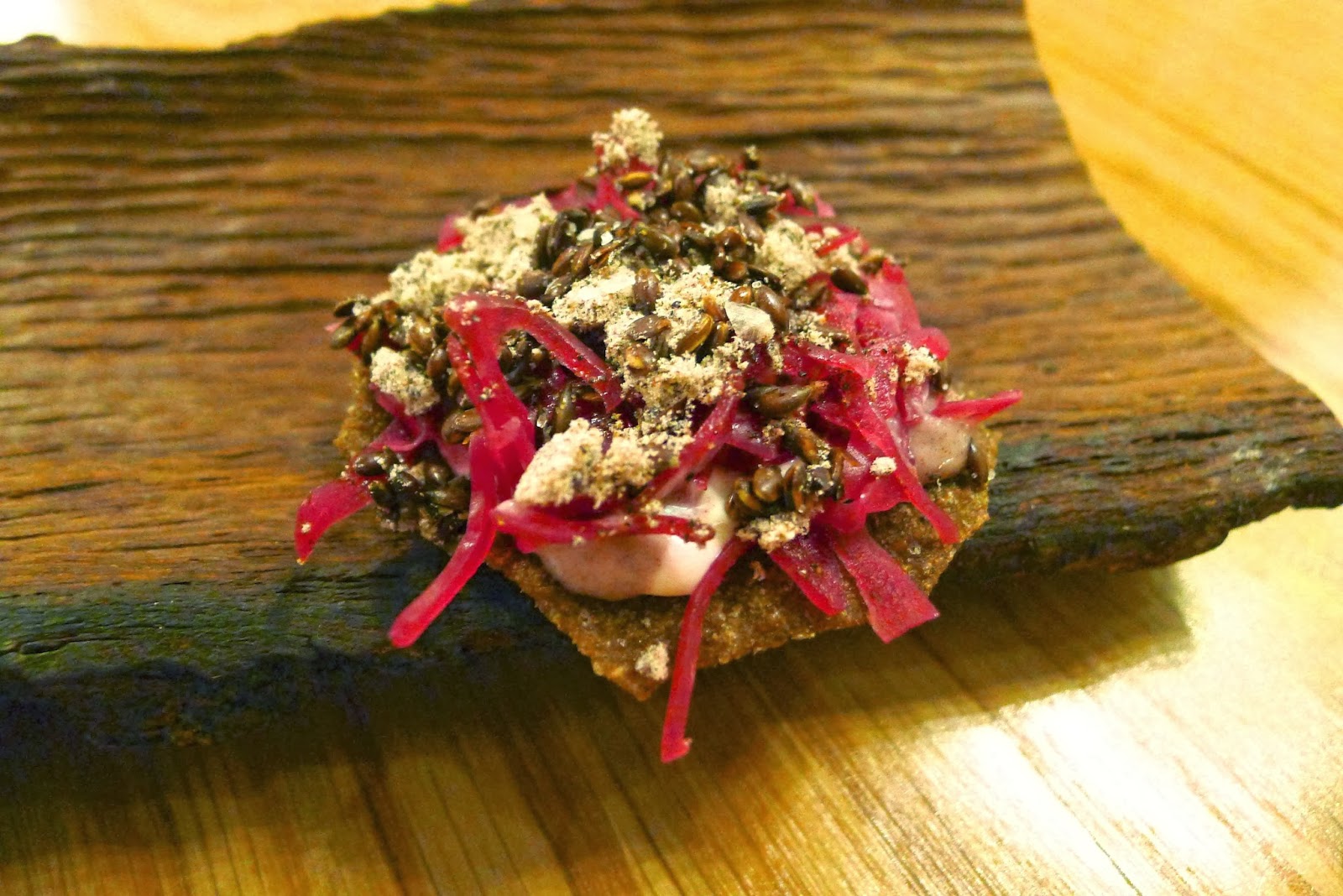 Rye, mustard & linseeds – a rye cracker with cider infused red cabbage and onion ash. Another excellent canapé that has been on the menu for a while in one guise or another. 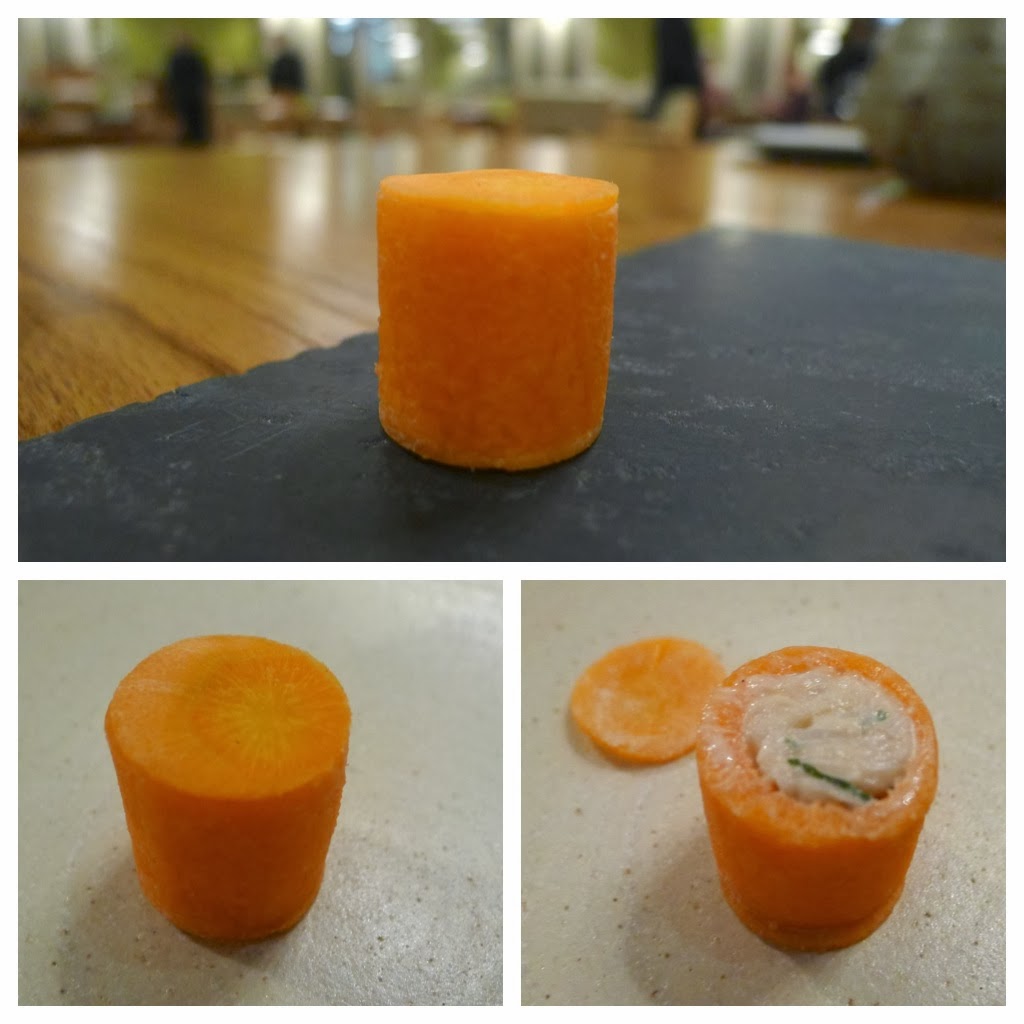 Carrot, crab, perilla – this was a new one for me. The presentation looked like a cross section of carrot; inside however, it had been cored and stuffed with a paste of crab, anchovy and perilla (a relative of mint). 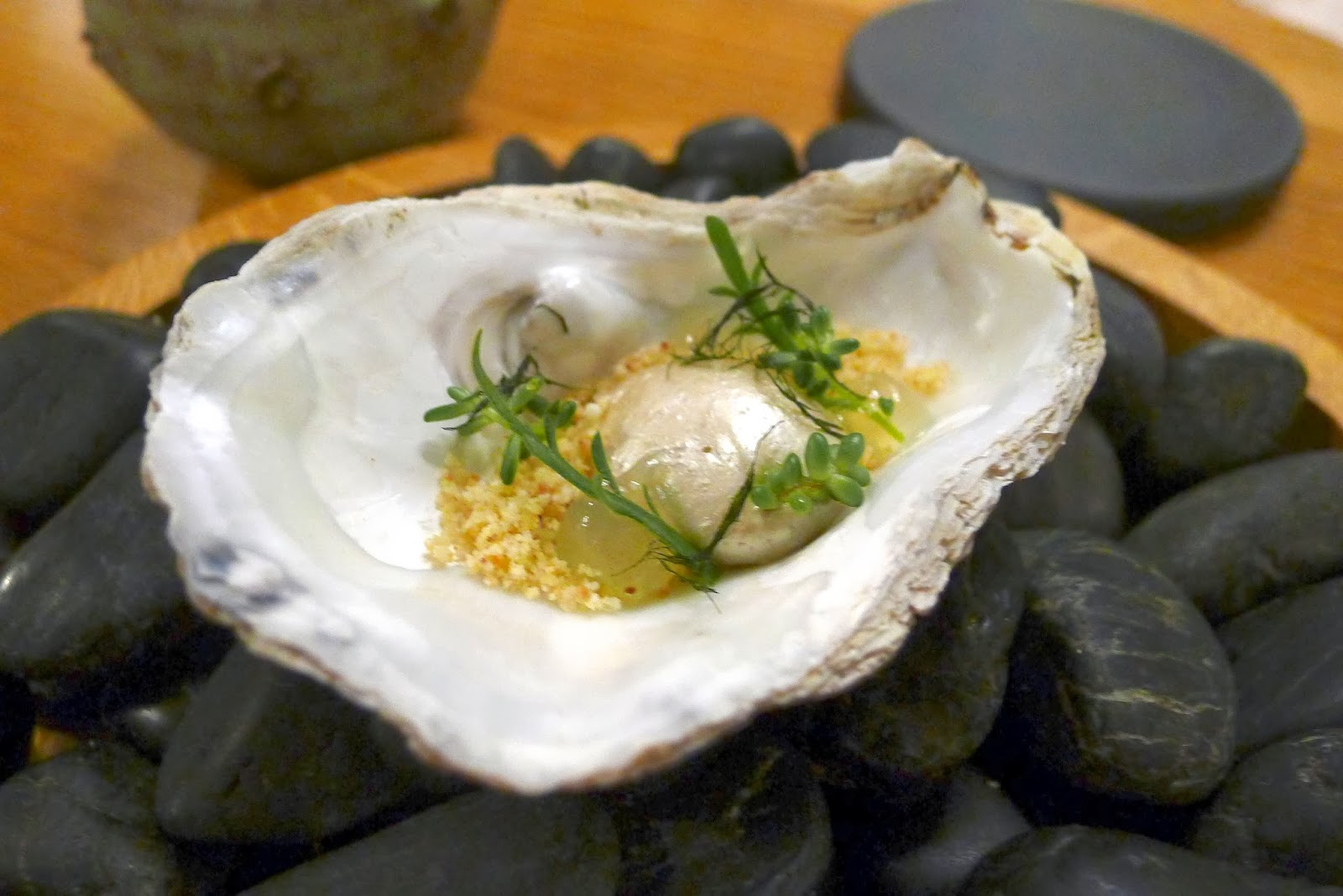 Cauliflower with apple – another new canapé consisting of an iridescent ‘cauliflower pearl’ presented as an oyster in its shell with sea herbs. 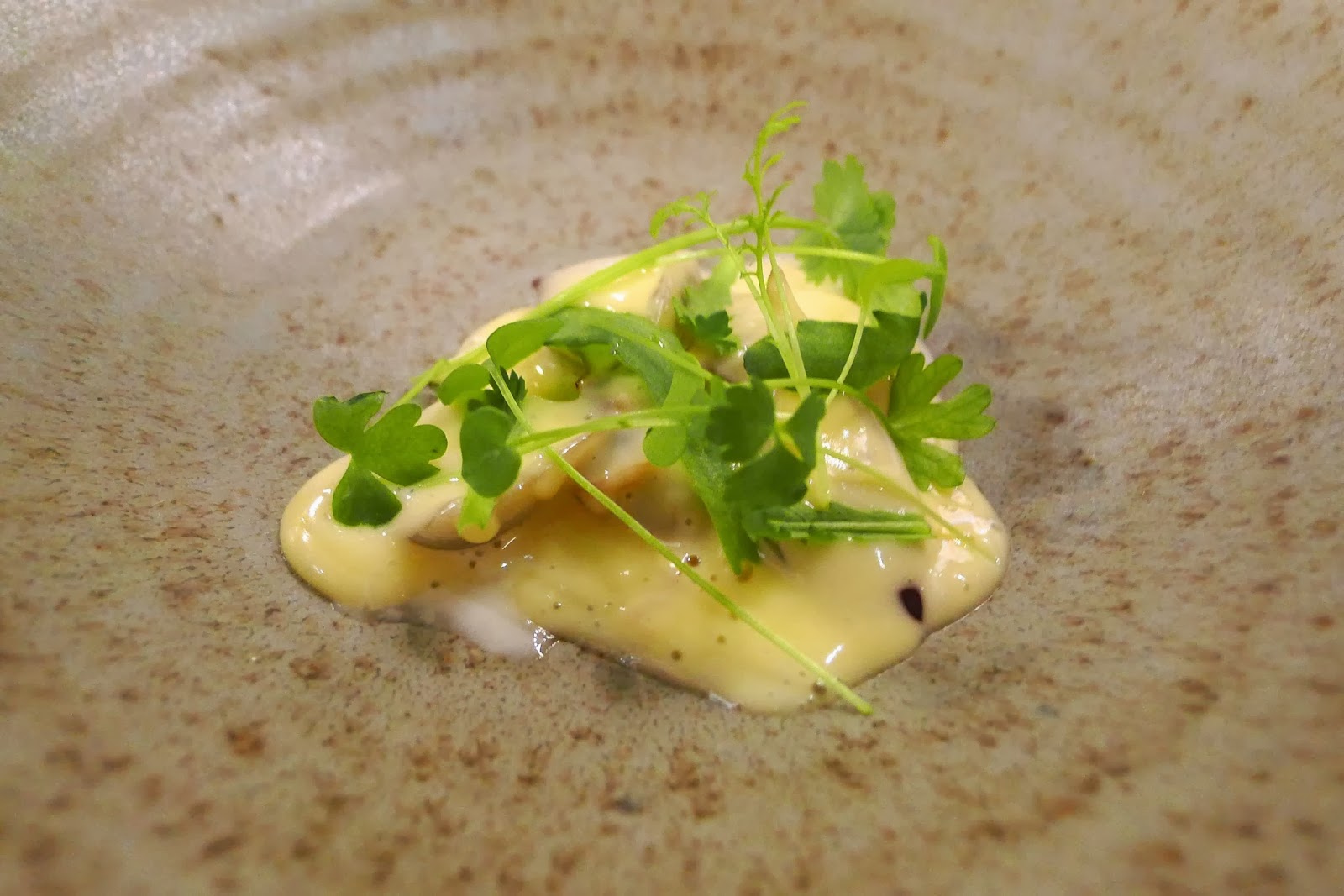 Butter glazed onions, black pudding, herbs & pickled cockles – the butter sauce was wondrously silky and complemented the deep savoury kick of the black pudding puree and acidity from the onions and cockles. 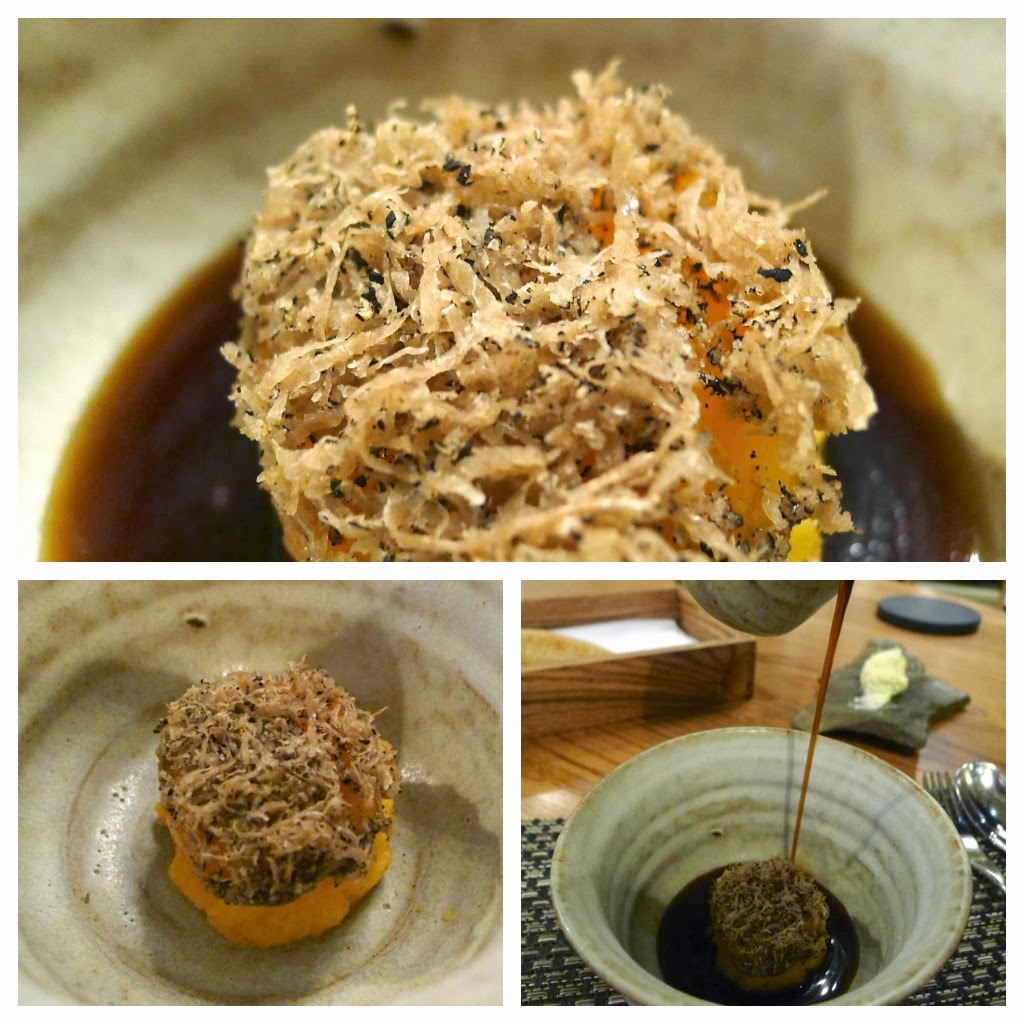 Broth of mushroom, salt baked yellow turnip, smoked yolk & English truffles – Simon Rogan’s ethos of using only British produce at The French and L’Enclume (set to be ‘relaxed’ at Claridge’s) denies them the use of the more pungent imported truffles; I think this dish was better for it as the depth of the broth and flavour of the pumpkin were enhanced; not overpowered. 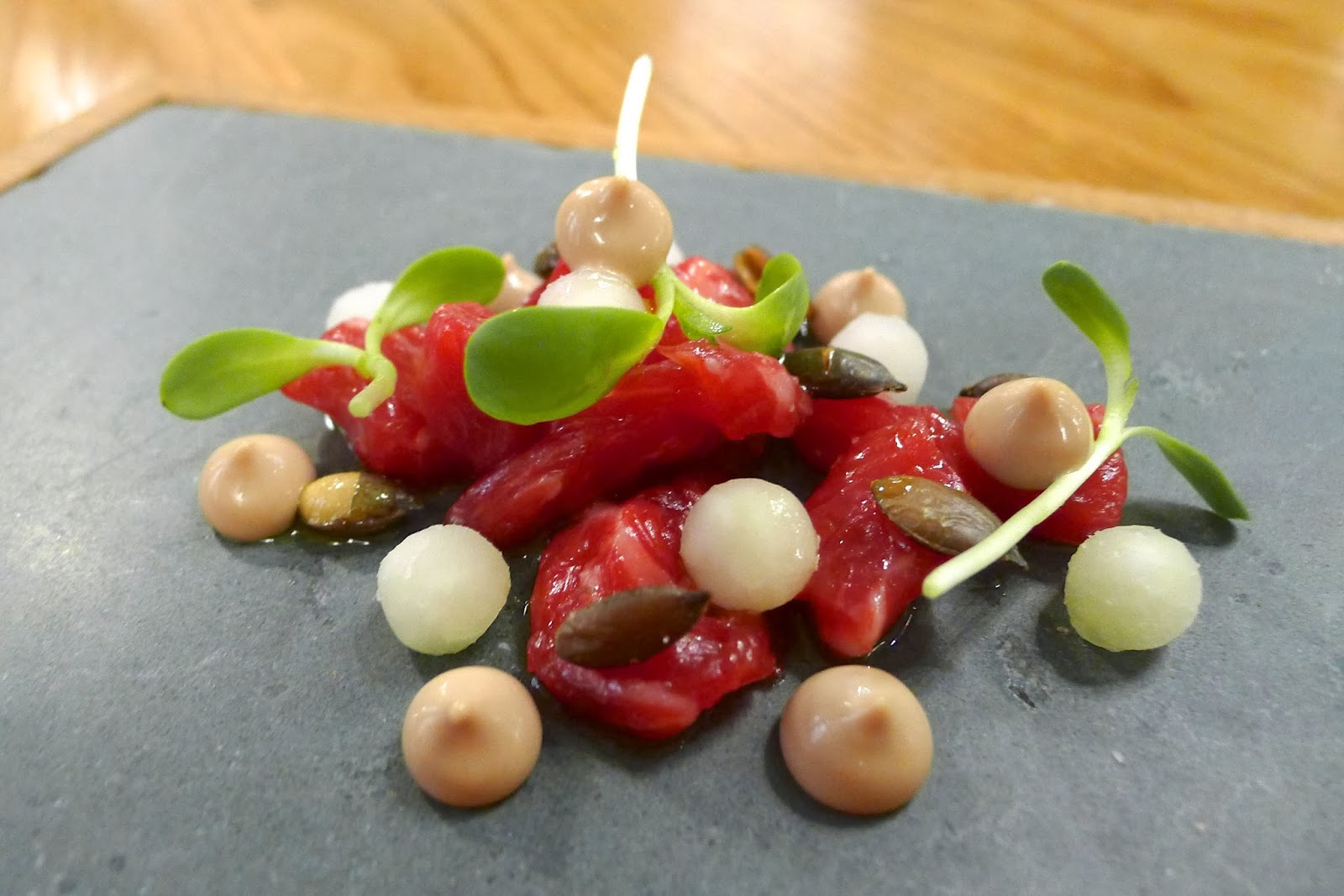 Ox in coal oil, pumpkin seed, kohlrabi & sunflower shoots – The French’s much talked about signature dish; I think this is the only course that exists from the original menu (although there have been minor tweaks). 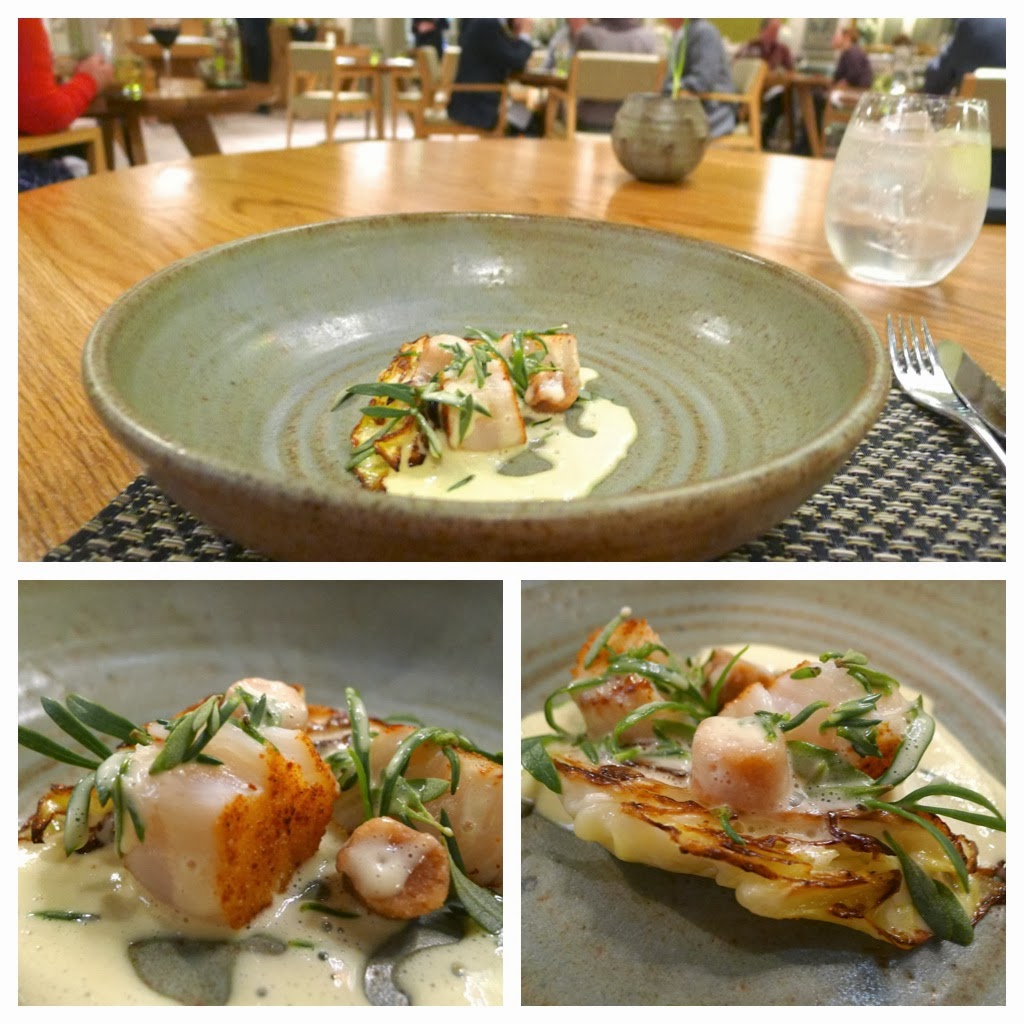 Caramelised cabbage, scallops, coastal herbs, smoked roe – I loved the combination from the crunch of the sea herbs and seared bits of cabbage and scallop with the richly enrobing sauce. 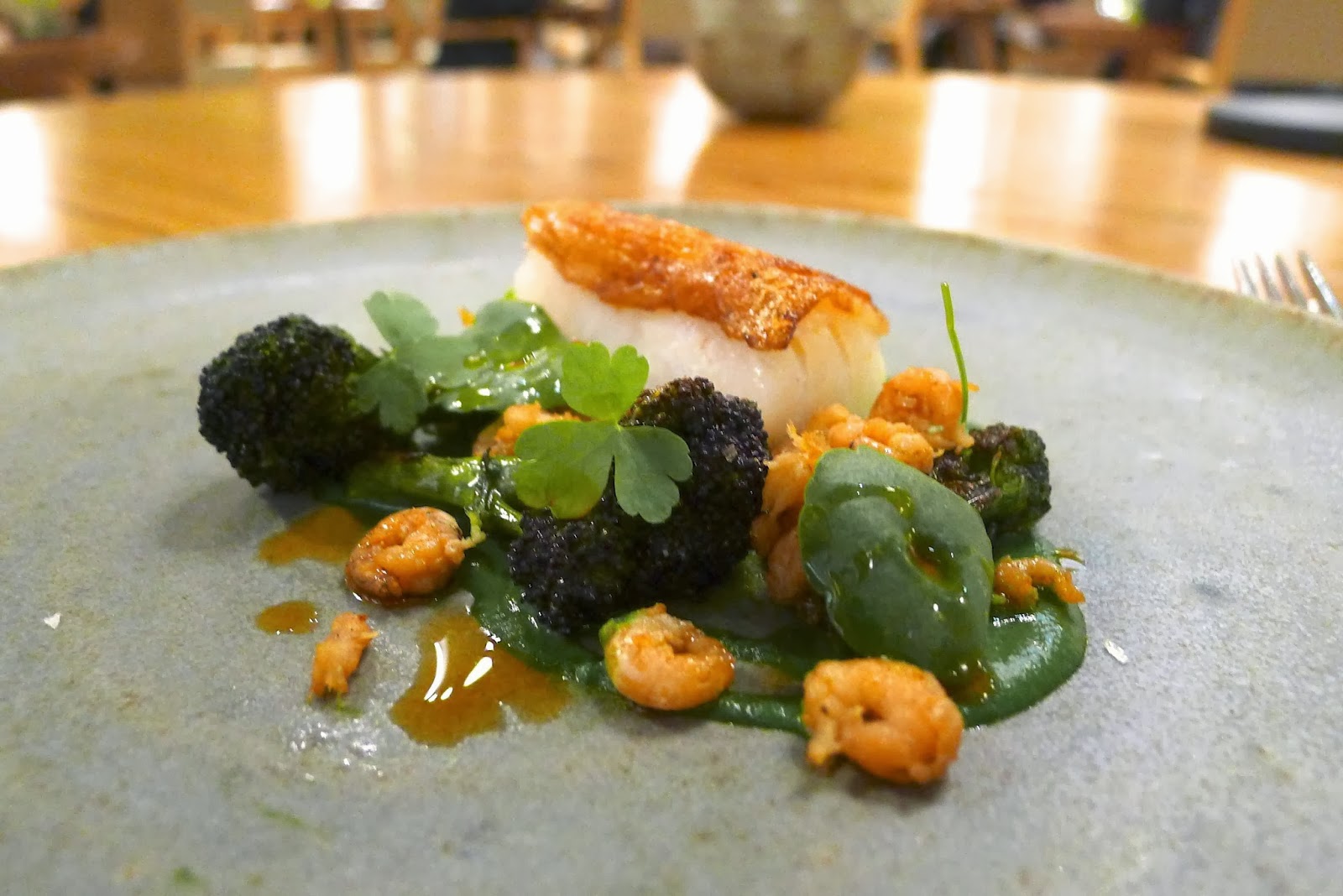 Roasted cod with chicken skin, bat shrimp, broccoli & parsley – this was the one dish that I feel fell a little flat. Perhaps a little more seasoning could’ve squeezed a little more flavour out. Valley venison, caramelised leeks, brussel sprout & chestnut – after the relative blandity (if that’s not a word, it should be) of the last course, this one was a proper smack around the chops. The meat was bursting with flavour and the sauce wowed. 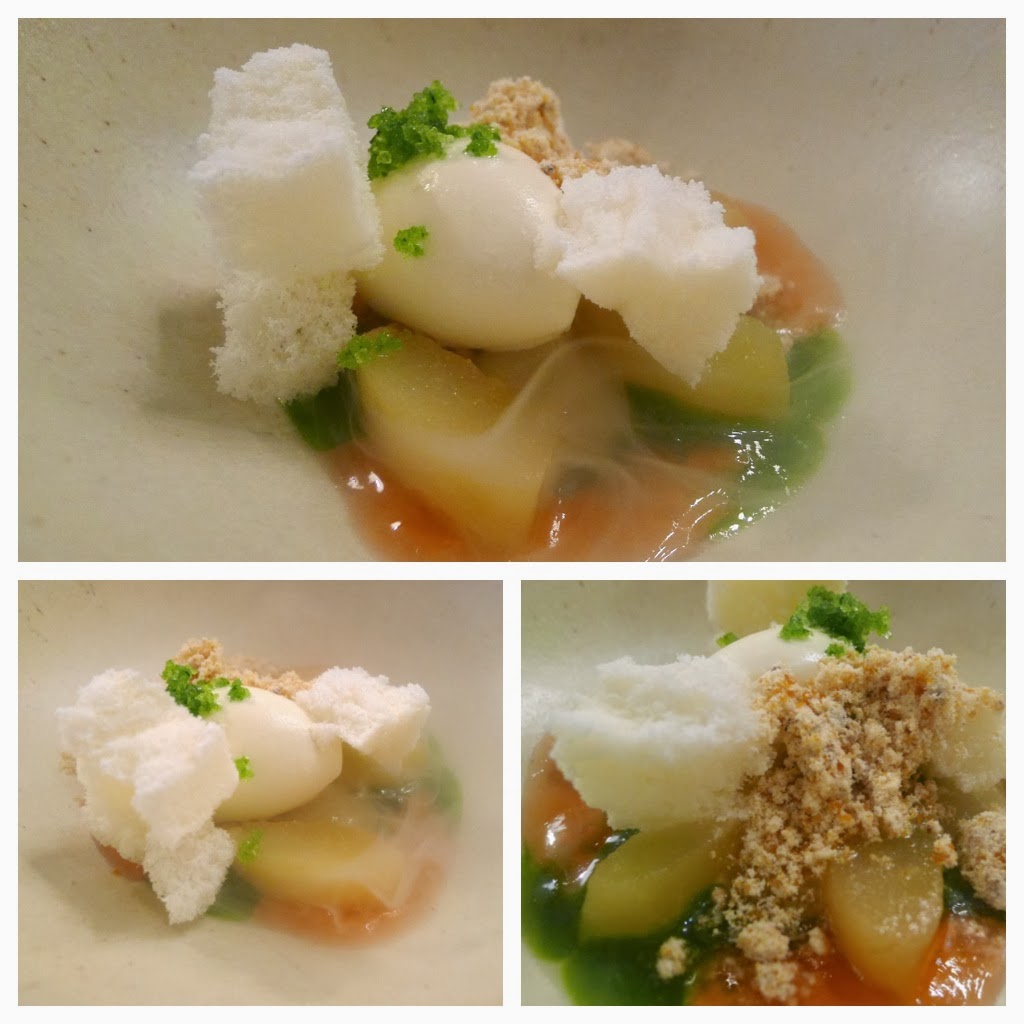 Pears, rocket, crab apple & hazelnut – the star of this dish was not the theatrical smoking of the nitro elements but the much-underused crab apple that had sharp acidic qualities (akin to verjus), which balanced with the sweetness of the pear. 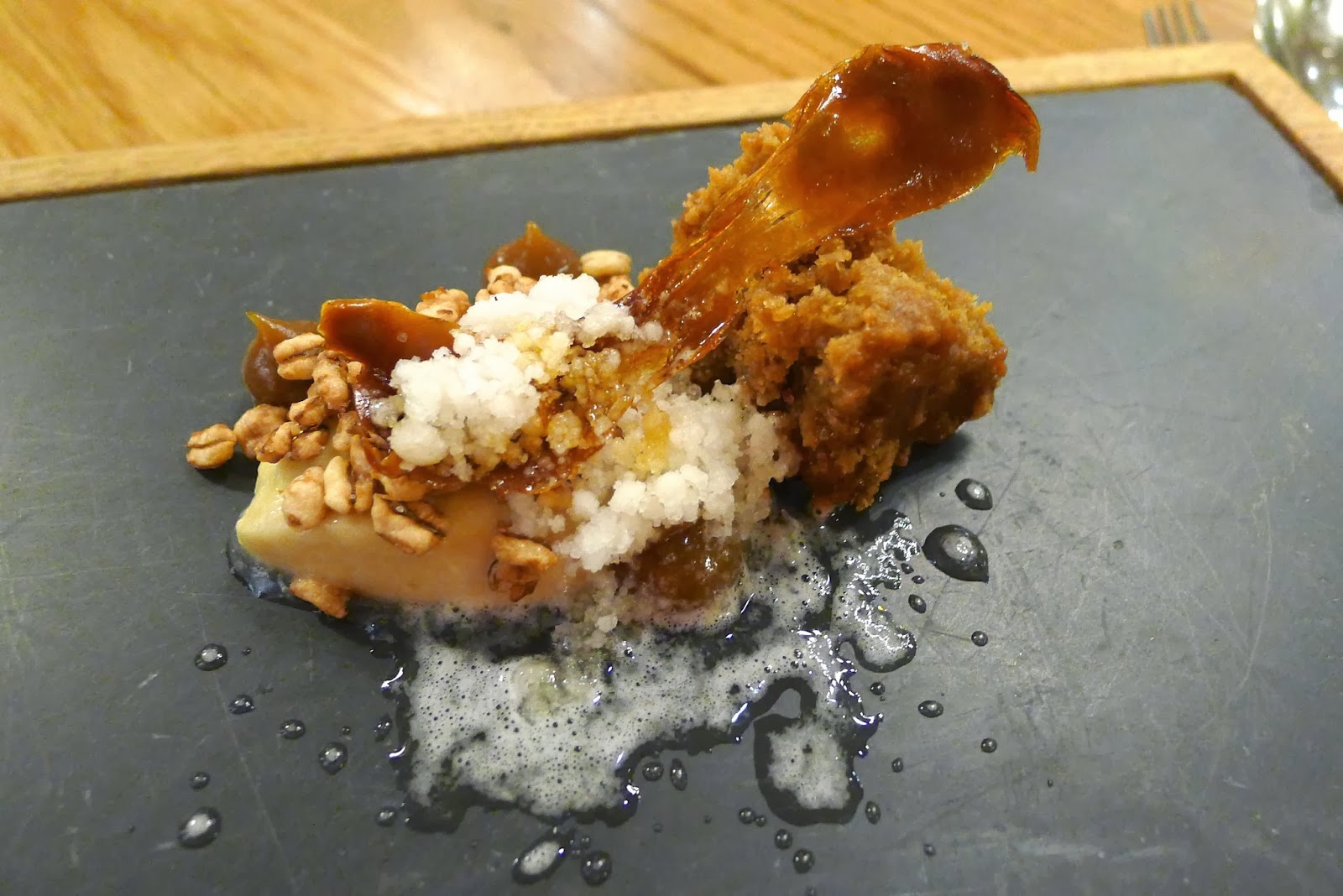 Parkin with malted barley, hops & liquorice – I first had this back in November and assumed it was a special for bonfire night; I’m glad to see it is sticking around throughout winter. 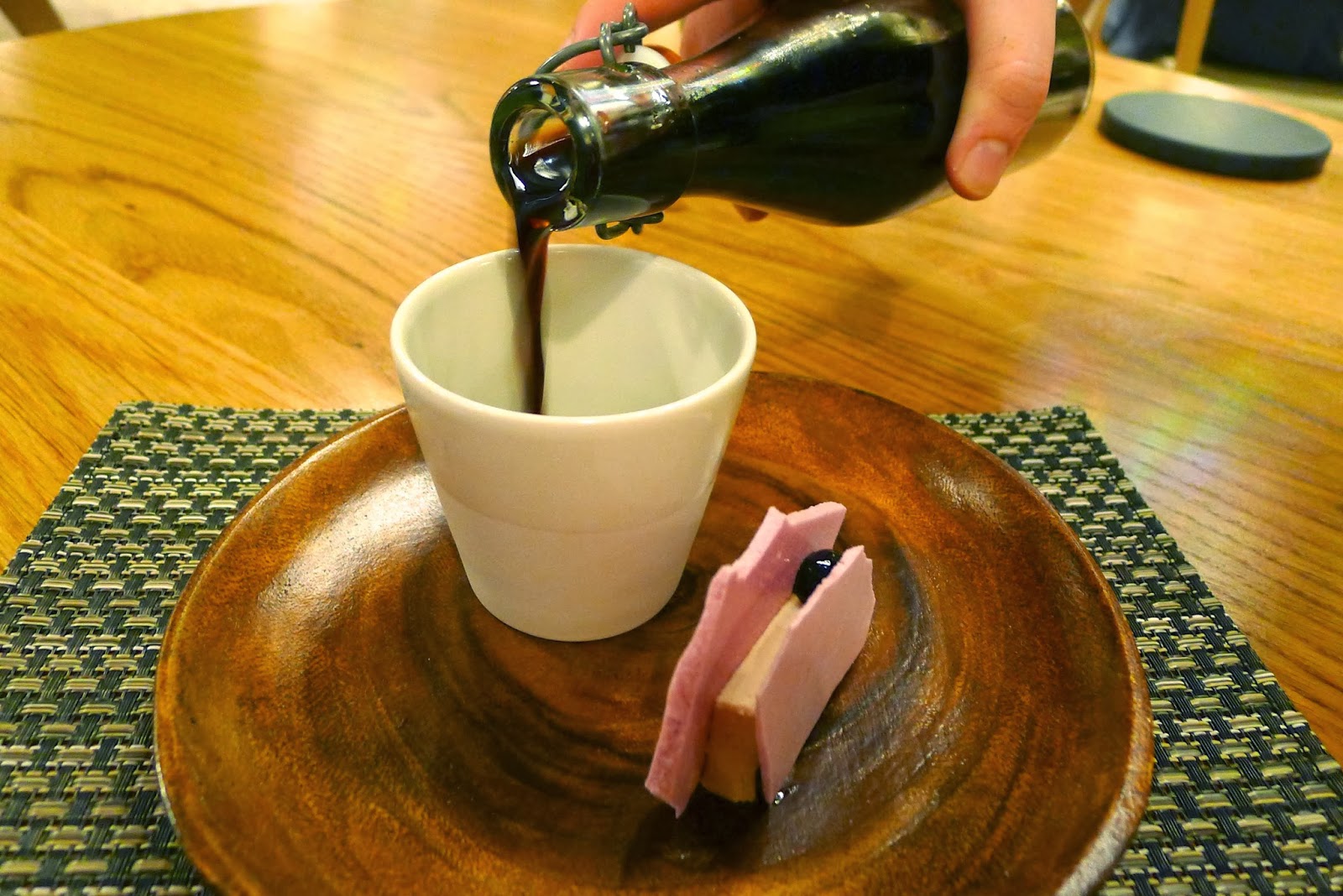 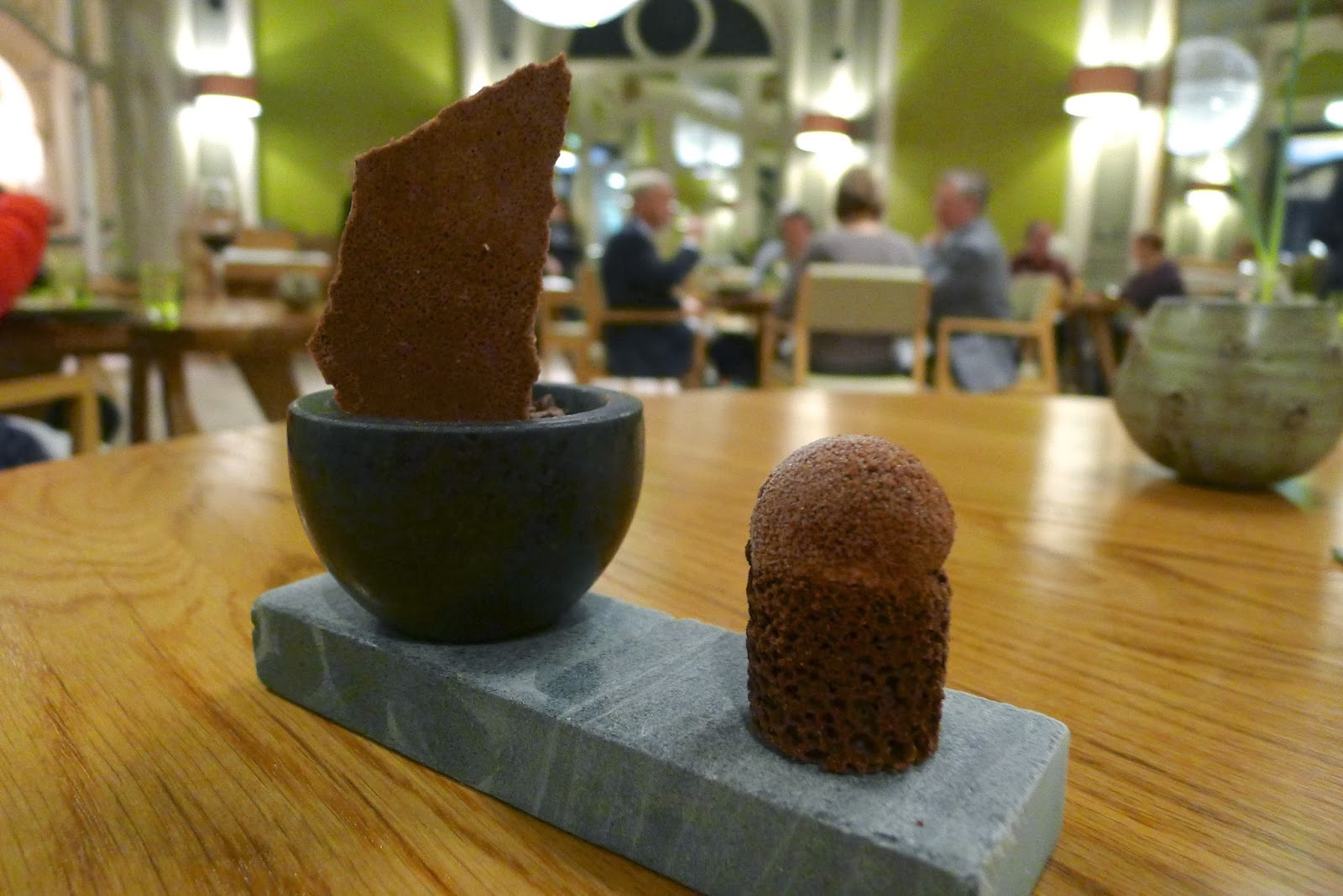 I’ll be back on the 12th March to help The French celebrate their first birthday (you could argue its 111th). Time will tell if they get the present they deserve from Michelin in 2014.