Inspiration for this post has come from three things which have happened during the last couple of weeks: The Times published an overall positive yet still somewhat Londescending* review of one of Manchester’s finest restaurants; it was Father’s Day and I had the pleasure of a return trip to Aumbry**. 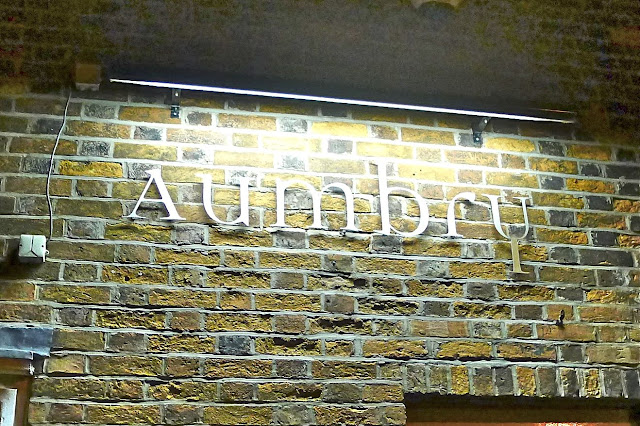 (*Londescending: a portmanteau term used to describe the condescending arrogance many of us Southerners can have towards ‘oop North’. Originally hailing from London, I fully appreciate the intrinsically deep rooted attitude, as it’s one that I have taken several years to shed.)

(**Aumbry: the restaurant, that The Times reviewer, Giles Coren, failed to appreciate quite as much as I feel he should have.) 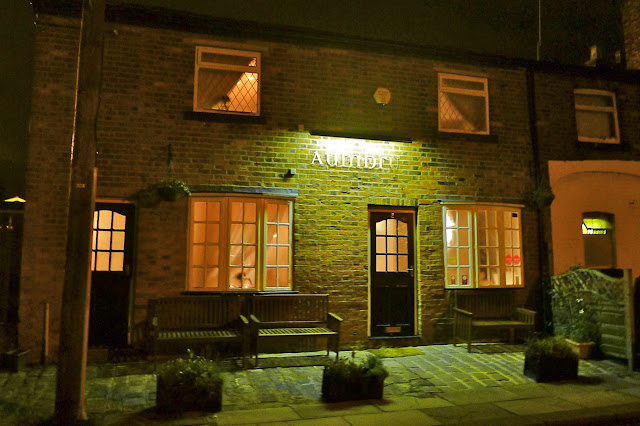 Like I say, it was Father’s Day recently. After a life of hard graft, my dad retired to Spain some years ago. As a result, I do not get to see him as much as I’d choose. Also, being a bloke, I don’t tell him enough what a great geezer he is and what a great role model he has been all my life.

It’s not unusual for sons to want to be like their fathers and my old man is an all round good egg – and I’d be happy to be considered half the man he is. I don’t have kids of my own, so ‘mine’ have been denied the easy job of following in my footsteps. Others however, have the daunting task of following in the footsteps of great men.

In music, many sons ‘cut from the same cloth’ with ‘music in their blood’ have tried to emulate their father’s successes and failed. I think of the Marley children: whilst I am a fan of Damian in particular, he’s never going to be able achieve the legendary status of his pappy. Think of James McCartney and Julian Lennon – both could harshly be considered more dung than Beatle.

In football too, take the likes of Jordi Cruyff - despite having a ‘successful’ career with teams like Barcelona and Manchester United, he constantly played in the shadow of the man dubbed ‘Pythagoras in Boots’.

Before I get carried away with too long a waffly intro (as certain ‘restaurant reviewing journalists’ are prone), the British Media too is littered with people who have been given a ‘leg up’ in the industry. Whilst, for example, Jay Rayner springs to my mind as a worthy scion, the Aumbry reviewing, Giles Coren remains someone I am not so sure about.

Owning most of his twenty or so books, my wife especially, is a big fan of Giles’ late, great father - the hugely influential writer and broadcaster Alan Coren. Although I mainly recall him as the team captain opposite Sandi Toksvig on the BBC’s Call My Bluff, I too have read a few of Coren senior’s books - an undeniably great man whose career spanned some fifty years at the highest level in journalism.

Being a food critic and having enjoyed his TV shows with the excellent Sue Perkins, I did follow Giles on Twitter at one point - but soon unfollowed him after one too many of his well publicised sweary rants (a different one from the incident in which he told @alice_emily to f-off and called her a ‘barren old hag’).

The father, Alan Coren was a highly respected, clever, satirical humourist, when you compare this to his son’s crass attitude that has recently resulted in him being reported to the Press Complaints Commission for offending his own Jewish people (not for the first time) and gave him the reputation as ‘the angriest man in newspapers’, I find it hard not to think of Giles as the Julian Lennon of journalism.

It may seem as though I am being harsh on Giles (or poor Julian)… and I suppose I am. The thing is, his Aumbry review, whilst generally positive included the odd little dig at a restaurant that is close to mine and many ‘Mancunian’ hearts. Obviously unable to find anything to be particularly scathing about, instead his Londescending attitude seemed to come to the fore. 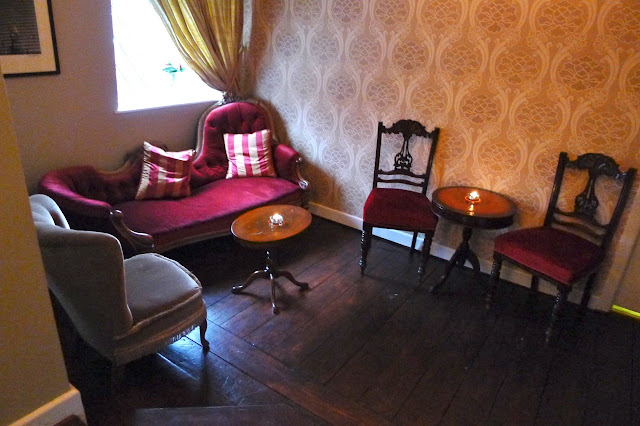 My belief is that Aumbry is very much a restaurant for the North – just as bands often try to ‘crack America’, many London based chefs have tried and failed to ‘crack Manchester’. It perhaps takes a local or ‘honorary’ local, as I like to think of myself, to know what works for us. Giles obviously didn’t get it (save yourself future train fares Mr. Coren, and don’t bother.) 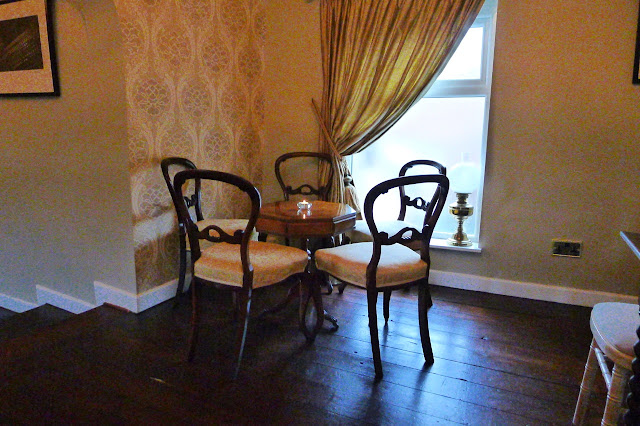 Since my last visit, Aumbry have had a refurb of their first floor reception area. The overall characterful style thankfully remains but the space is now much lighter and charming. The heavy dark red curtains have been replaced with plush golden drapes. The carpet has been removed and the floorboards restored to a former glory. Furniture is still ‘eclectic’ but less mismatched – an altogether more welcoming space. 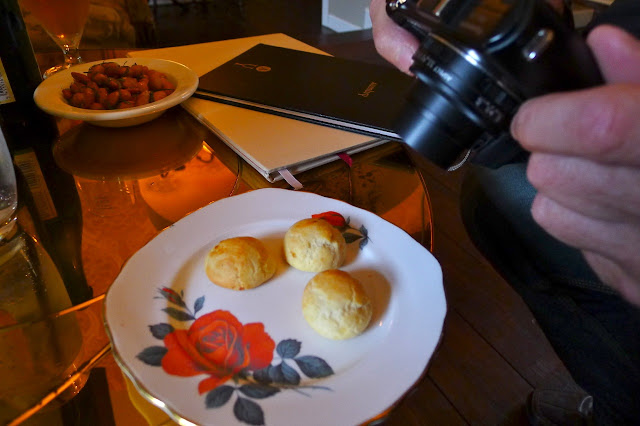 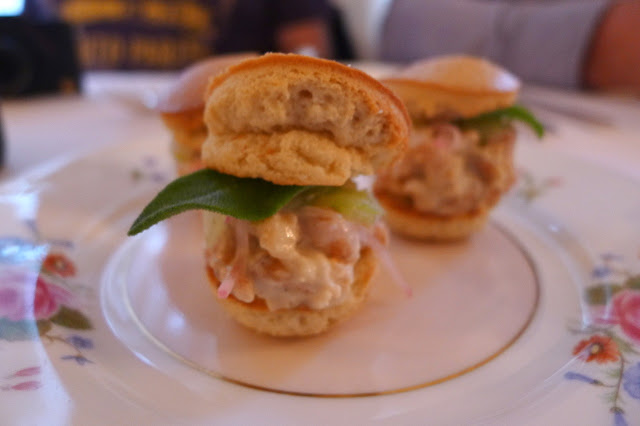 The Amuse Bouche continued with an excellent Potted Shrimp Burger with Ice Plant and Turnip – I could’ve eaten a dozen of these! So far, the best amuse of the year.

Aumbry’s usual flavourful Sourdough Breads followed these with William’s (of Bolton) and Nut Brown Butters and, of course, the show stopping Beef Dripping – always a favourite. 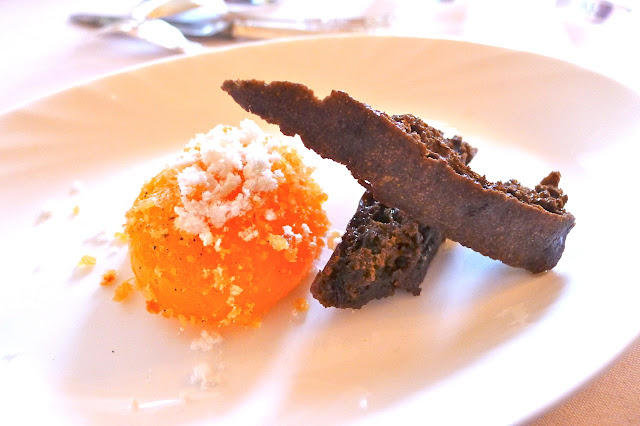 It’s well known that Chef Mary-Ellen and her husband Laurence worked for four years at Heston’s Fat Duck in Bray; what came next was indeed a plump, fat Duck Egg Croquette with a little of their fancy molecular trickery employed to create the an accompanying Birch Powder and textually pleasing Malt Loaf. 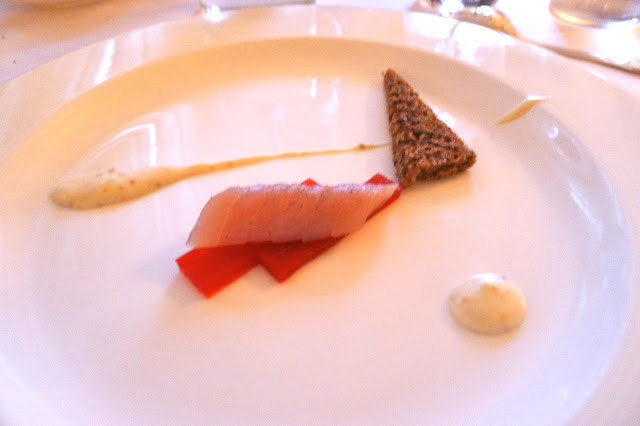 Next, we were treated to another Aumbry favourite, the Home Smoked Mackerel with poached rhubarb & mustard cream – the subtle smoking of the mackerel, as always was a triumph. The rhubarb was a tad more tart than I remember from previous visits, which was a good thing. 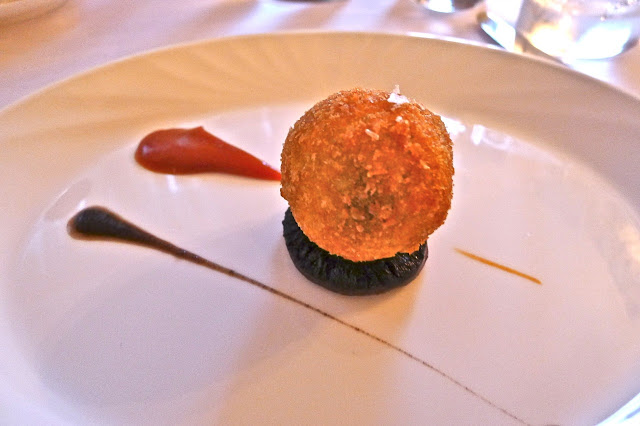 Another favourite followed, in the shape of a signature Bury Black Pudding Scotch Egg with its mushroom plinth and accompaniment of house made tomato ketchup and mushroom relishes. 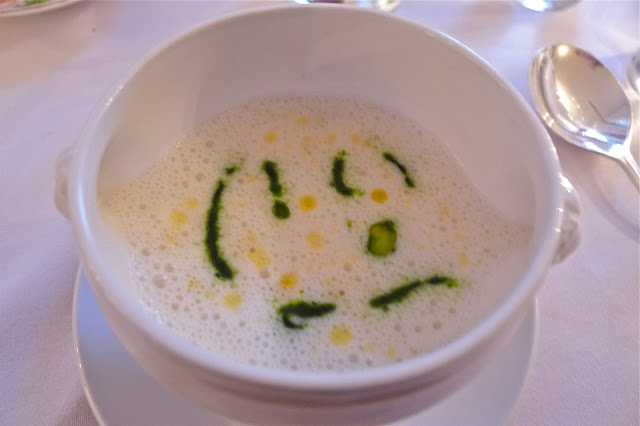 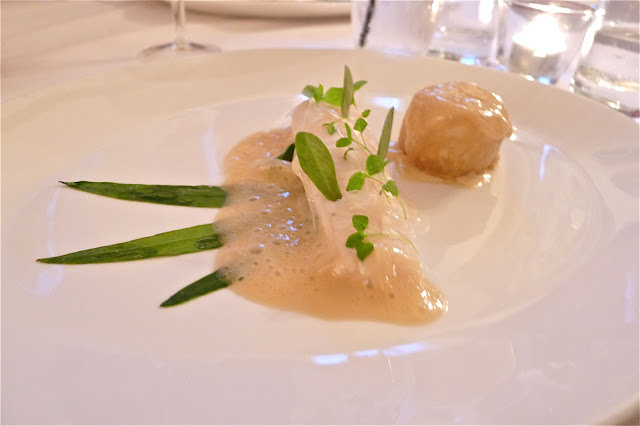 In the next dish, the Poached Plaice with Oyster pudding, I often find the plaice unfairly suffers alongside the exceptionally tasty pudding. The plaice is good but the puddings are one of the best things I’ve ever eaten! Sea aster, peppermint, purslane and the unique acidic hit of verjuice completed the dish. 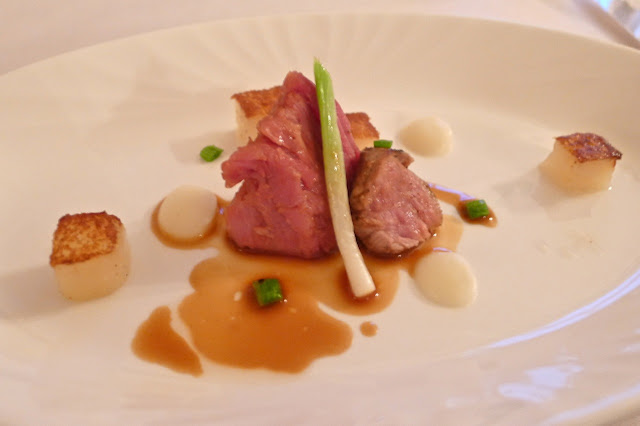 Giles, in his review said that the Slow cooked Cumbrian lamb (braised shoulder & chargrilled fillet) was one of the ‘best things’ and described the roasting juices as ‘magically rich’. Finally agreeing with something he says, I too found the lamb delicious, sweet and salty – it was served with a white onion puree and with spring onions grown locally by the Langdon community project. 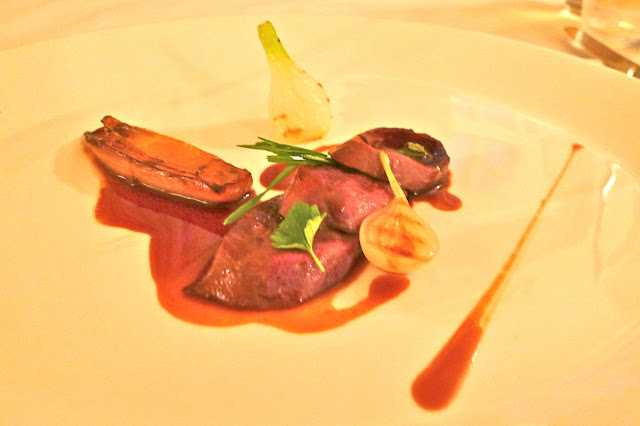 My Cumbrianfoodie friend was rightly proud of another offering of meat raised and fed in the wilds of his home county, the Cumbrian Wood Pigeon. The pigeon was cooked exquisitely well and served with a perfectly glossy, rich sauce. Grilled grelot, lemon balm and barley grass also featured but it was the braised chicory that really did it for me. 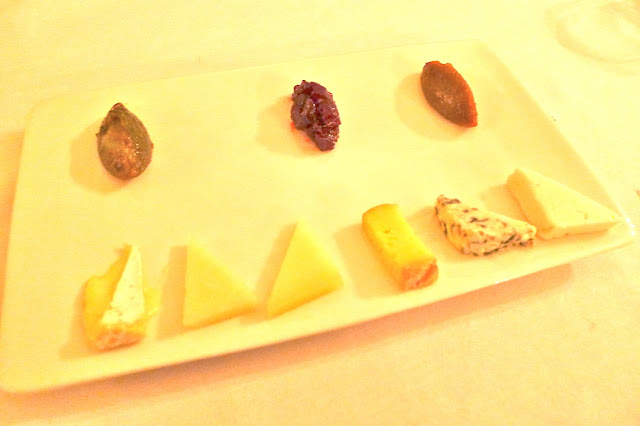 A top selection of British & Irish Cheeses with house made chutneys and condiments and a palate cleansing Grapefruit Posset with celery granita & sherbet followed. 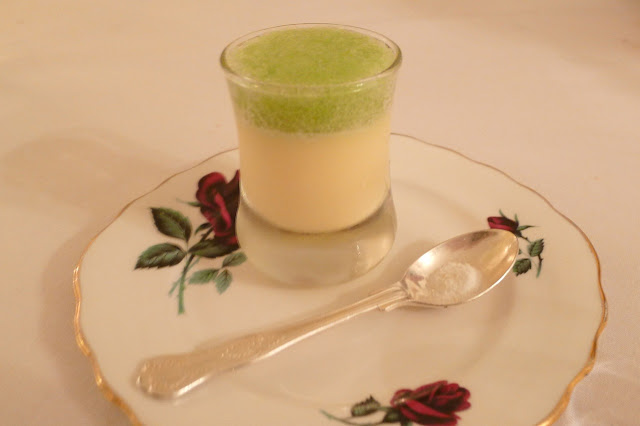 For dessert, Mary-Ellen sent out a trio of offerings for us to share. Each of them new to me; the ‘trifle’ described ‘a work in progress’. 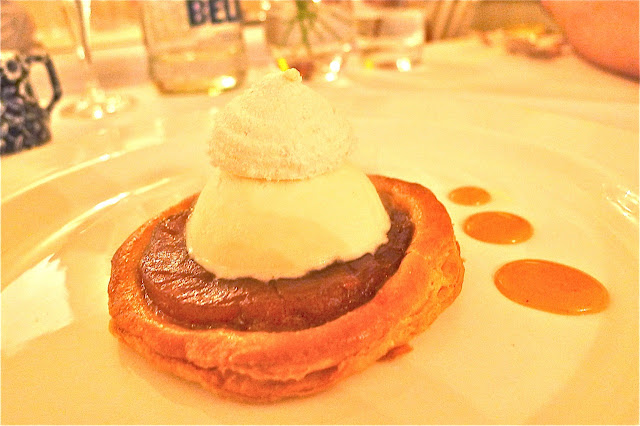 Apple Tart with local Heaton Park Honey, yoghurt with bay & almond – the tartly sour taste of the apples, sweetened with the honey came set atop of a wonderful pastry base; a very good dessert. 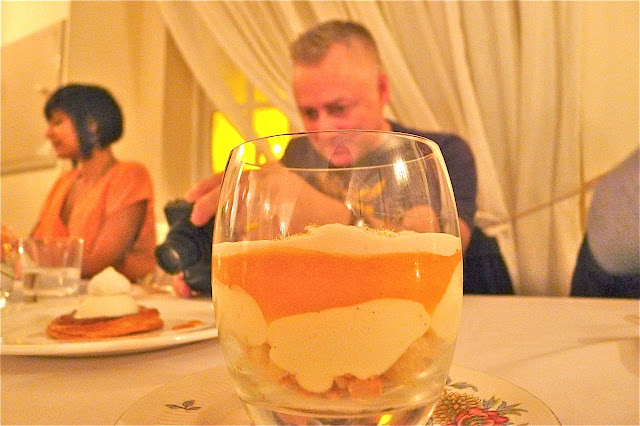 The ‘work in progress’ was the ‘Aumbry Trifle’ the main kick coming from a Gutiérrez Colosia Moscatel used liberally to soak the almond sponge and again in the syllabub. This was well balanced with a Chamomile custard and fruity apricot jelly. 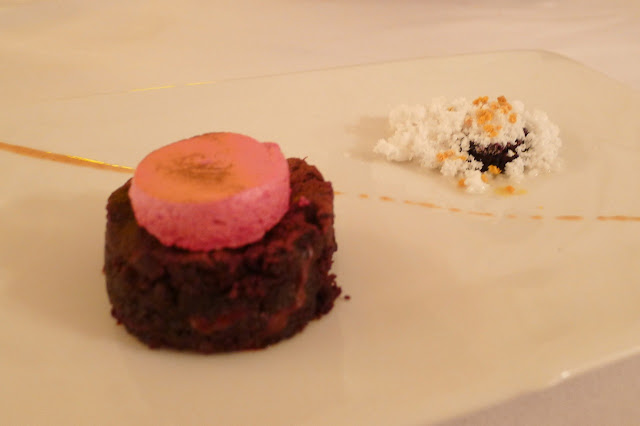 The Beetroot & Chocolate Cake was my favourite of the trio. The rich, chocolaty cake was excellent but it was the light, airy marshmallow with its punch of flavour that swung it over the other two desserts. Caraway, hazelnut, more Heaton Park Honey and bee pollen also featured…

But by this time, the drink had started to take effect on my non-driving dining companions and friendly conversations had struck up with neighbouring tables, so I was beyond ‘concentrating’ on analysing flavours for blogging purposes – after all, the food and company at Aumbry are all about enjoyment… I just remember oohing and aahing!

Giles Coren’s How to Eat Out is now available, published by Hodder & Stoughton.