As the World’s 50 Best Restaurant’s website states, ‘Andre is an intimate three-storey 1920s heritage shophouse located in the conservation district of Bukit Pasoh in Singapore. Helming the pristine kitchen is chef and owner André Chiang who is best known for his unique style of Southern French nouvelle cuisine that is often interspersed with vibrant Mediterranean touches.’ (see here). 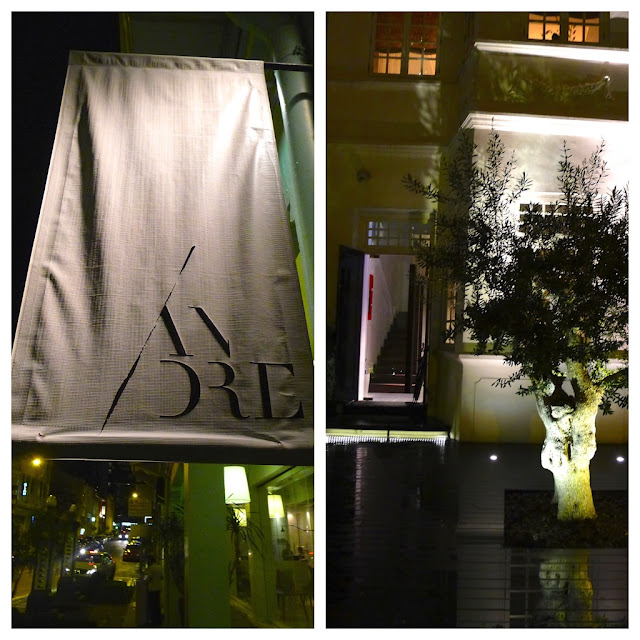 With it’s current ranking at 68 in the list (up 32 places from the previous year), it should have been one of the highlights of our holiday. Nahm, at number 50 (here and here) was the main reason for the trip.

Friends of ours had been the night before and were sat in the main plush, light, carpeted dining room and thoroughly enjoyed the food and the whole experience. 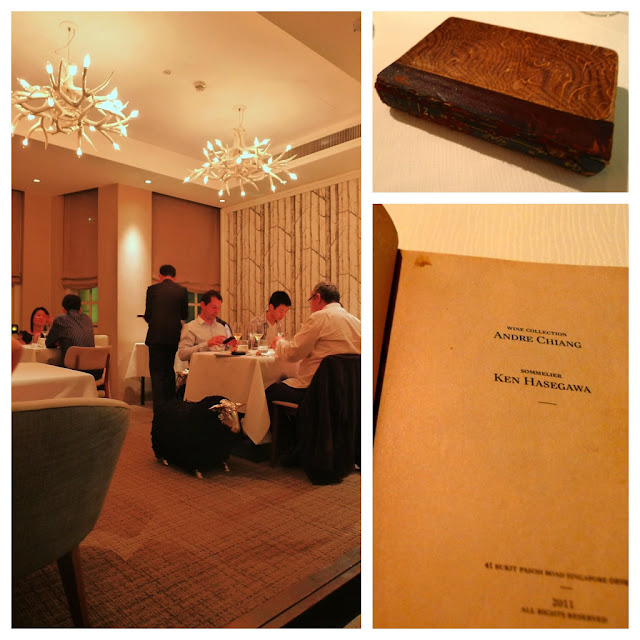 We were sat in the narrow, dark, wooden floored corridor where a constant flow of waiters clomping past at close proximity destroyed any ambience. Sadly, this let down the whole experience (as did a few ‘service issues’ that I’ll get to later). 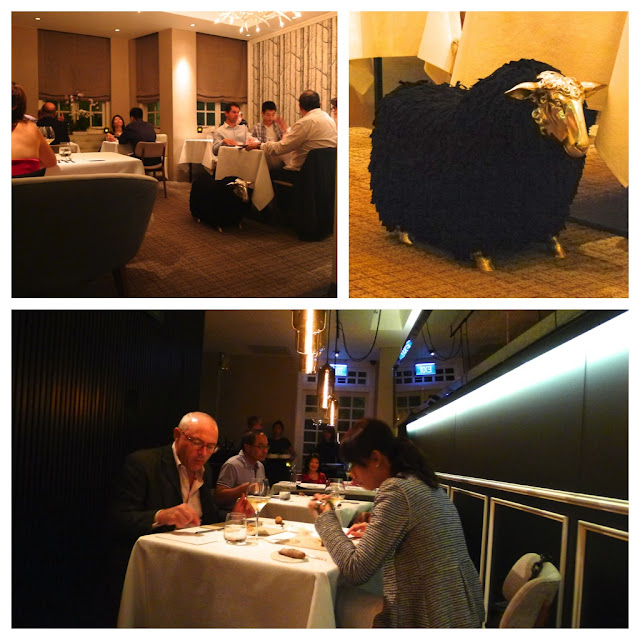 These issues aside, the food was indeed ‘world class’ -  in conversation, a one star chef, who has eaten at Andre, suggested that it would receive three stars in Europe. Of course, he probably knows much better than I do but I’m not sure it would even get two. 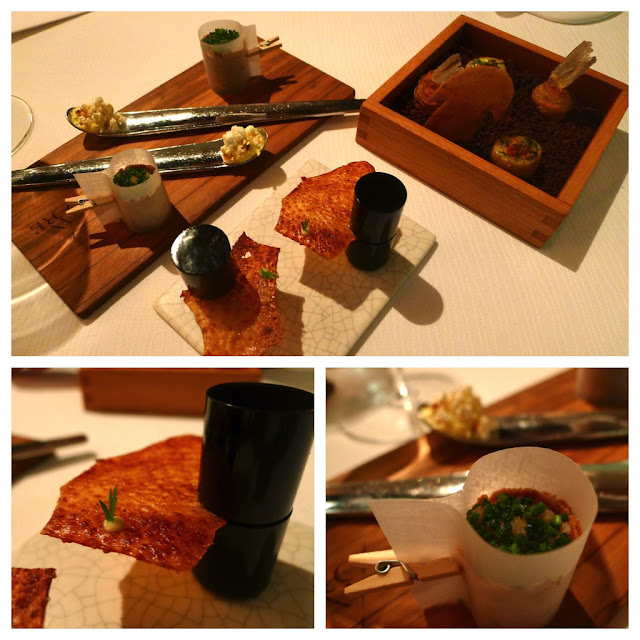 The first dish was called ‘Pure’ and featured premium Palamós prawns, Japanese ama ebi, Spanish mussels, abalone herb coulis cream and Japanese chives. The maître’d reinforced the point that the dish was called ‘pure’ because no seasoning had been used in its preparation to allow natural flavours to shine – This idea sounded great in principle but I couldn’t help feeling it could have done with some seasoning. 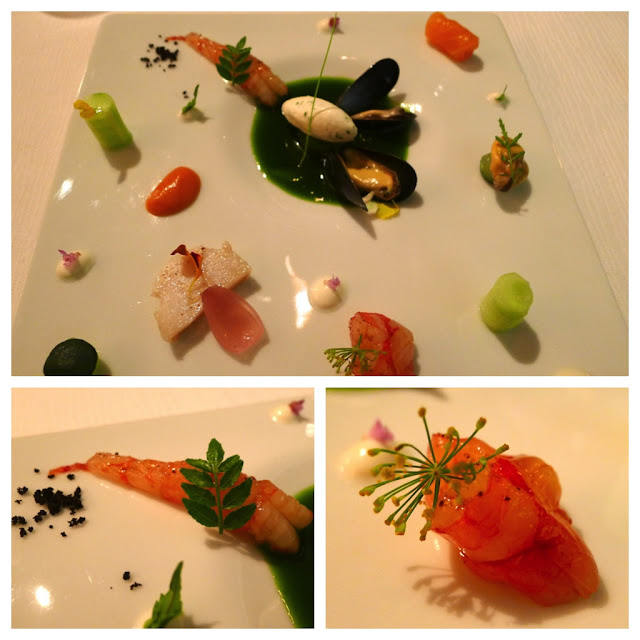 The dish called ‘Salt’ was much more pleasing on my palate. It was visually impressive too with sea lettuce, sea corals, shimeji mushrooms, bursts of sharp sweetness from apples, and pops of saltiness from Beluga caviar, golden caviar and an oyster tartare. 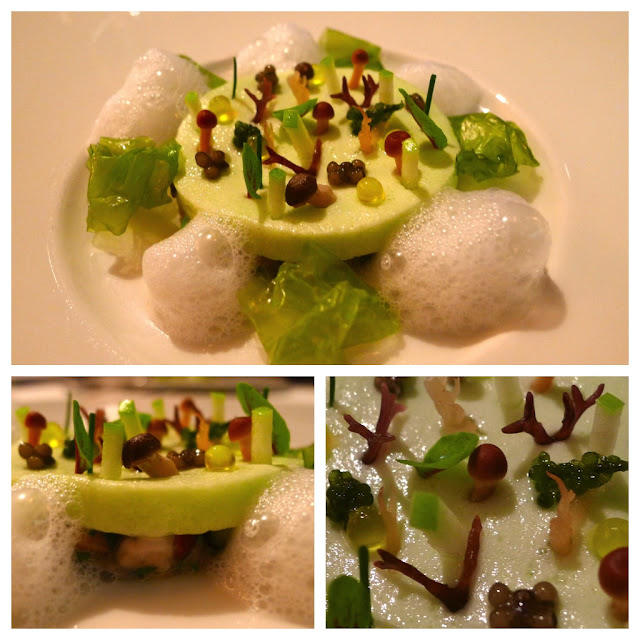 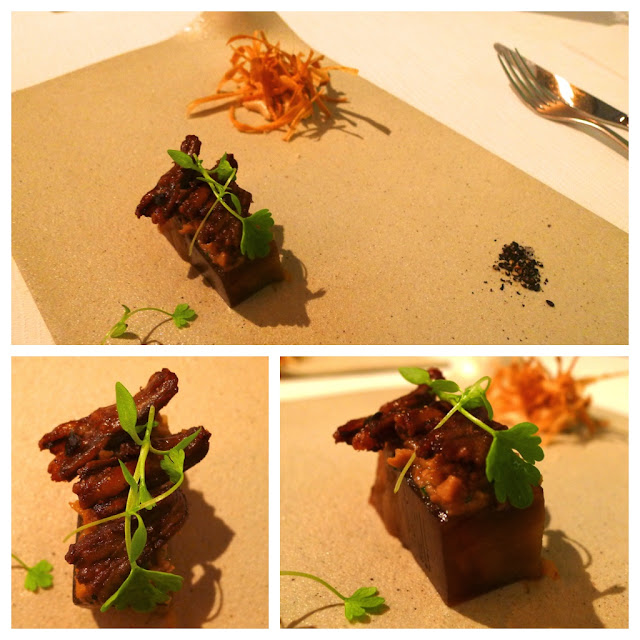 ‘South’ was supposedly inspired by the chef’s time in the south of France with the 3 Michelin starred twin brothers, Jacques & Laurent Pourcel, although it did seem to have more of a Japanese influence. 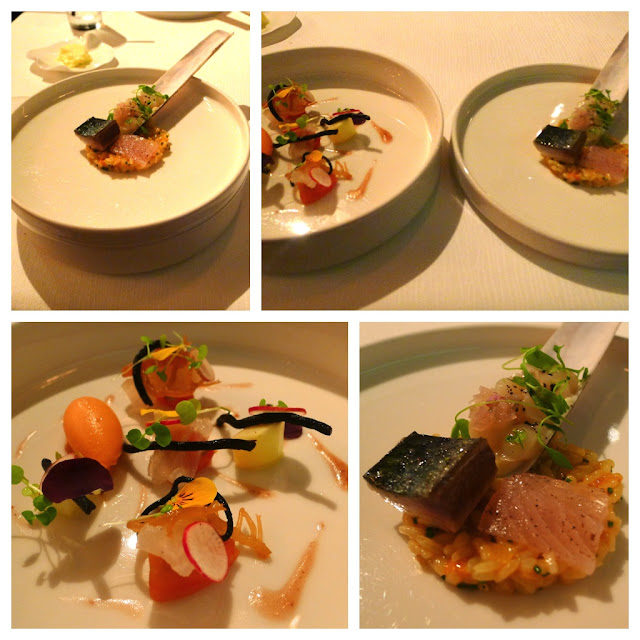 It came in two parts on stacked interlocking plates: the uppermost plate sporting a chilled risotto with a sliver of Hamachi (Japanese Yellowtail), a razor clam tartare and seared Spanish mackerel. The lower plate had a colourful arrangement of seaweeds, cresses, petals and white peach with the French influenced radishes and tomato sorbet.

‘Texture’ starred sweet meaty bites of lobster were served with clouds of ‘air injected potato gnocchi’ floating in a scallop cream with heavenly orbs of salty Beluga caviar and petit pois. It would be easy to criticise and to say the dish needed more ‘texture’ from something crisp, crunchy or alike but I felt that what was on the plate did enough. 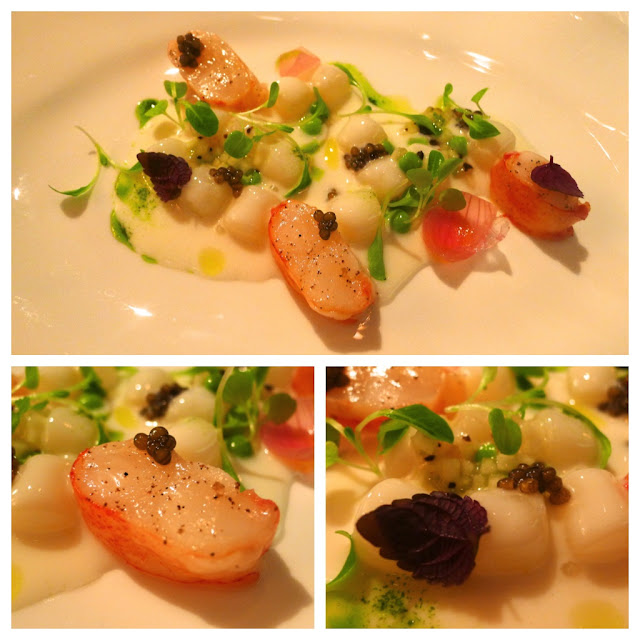 ‘Unique’ a tartare of Japanese Kisu Fish (known in the UK as Whiting) wrapped in a fillet, black olive, tomato confit, artichoke heart with red sorrel leaf. This was my favourite dish of the meal – wonderful Mediterranean flavours with an Asian twist. 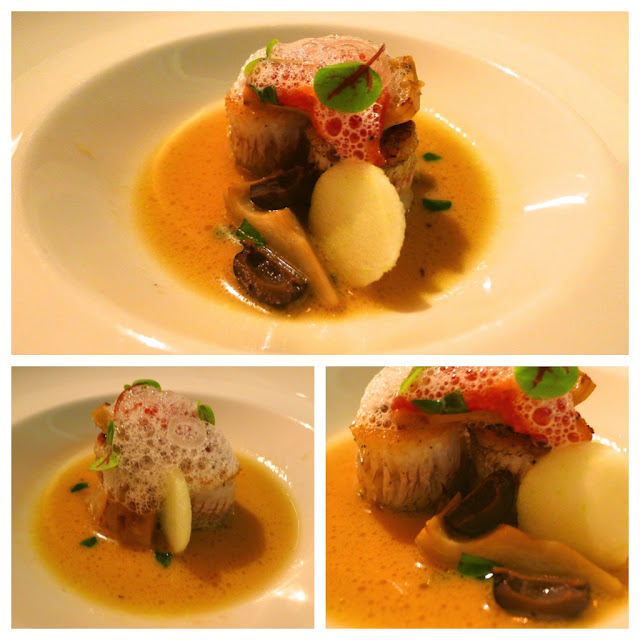 ‘Memory’ was a delicious hot foie gras jelly topped with stunning black truffle coulis and chives. Chef Andre created the dish when he worked with the Pourcels and it was implied that it was a major contributing factor to their restaurant receiving 3 Michelin stars. Guest were invited to ‘share this memory’ with Andre by making it ‘their own’. 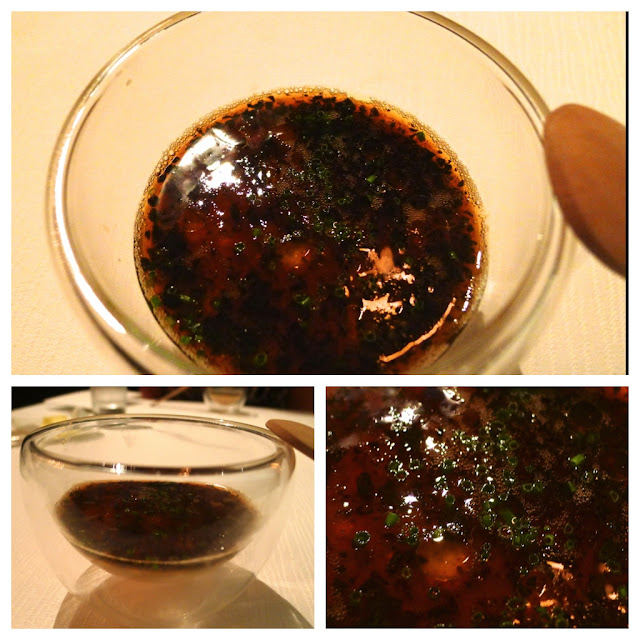 My overriding memory is of the maître’d reeling off his spiel and patter and robotically cracking the same jokes that we had just heard at the previous tables. Perhaps if we had just been served the food with a brief description, it may have been the food that stuck in the mind for it was actually very good! 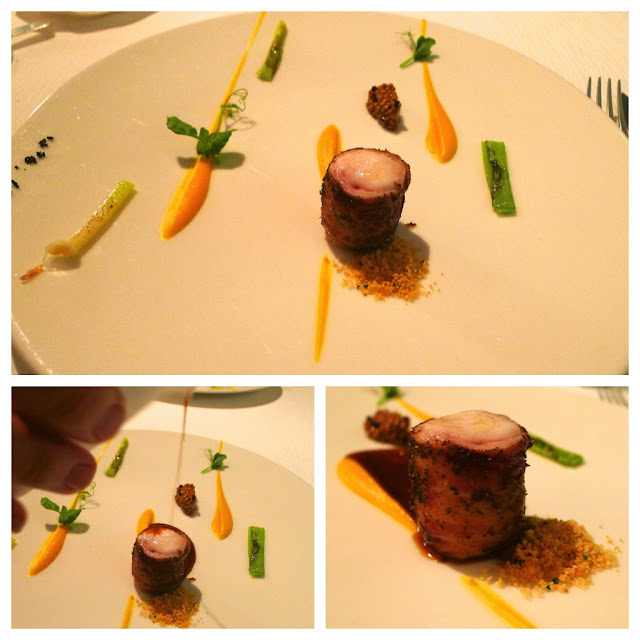 The first dessert, named by the chef’s wife, was called ‘Snow White’ – freeze dried berries, fig, honey ice cream and shaved ice. It was a beautiful tasting dish – I felt the honey flavours balanced well with the fruit. 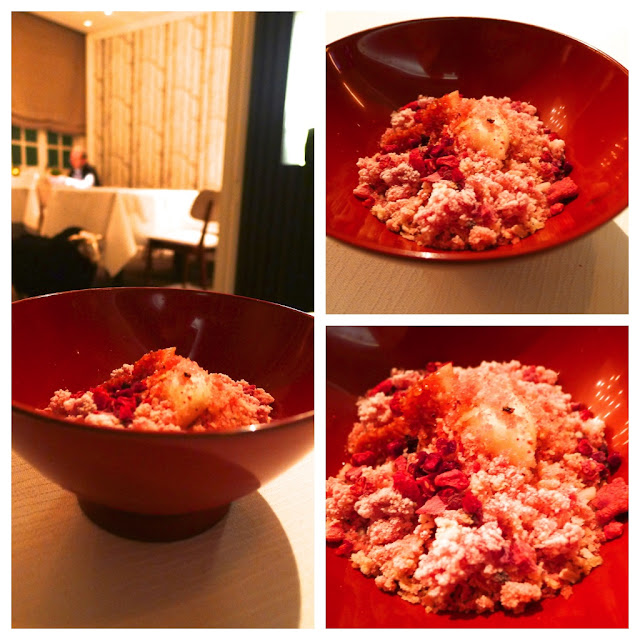 Next came, ‘Snickers v2012’ – this was a triumph. Very reminiscent of what I still like to call a Marathon. 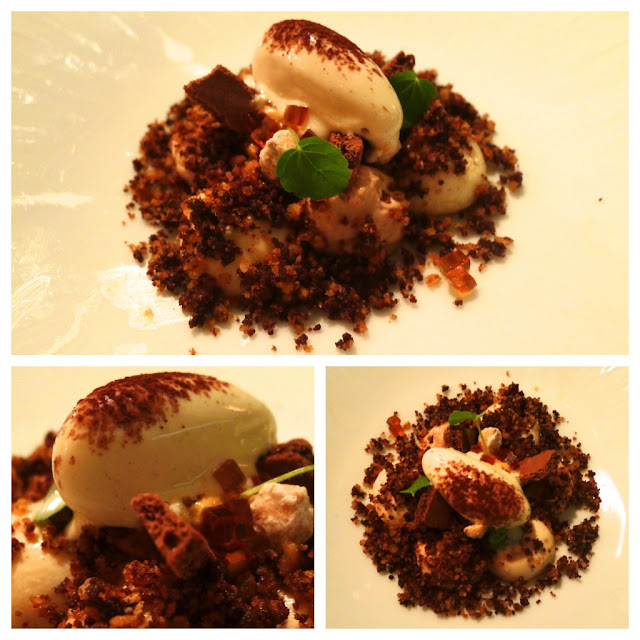 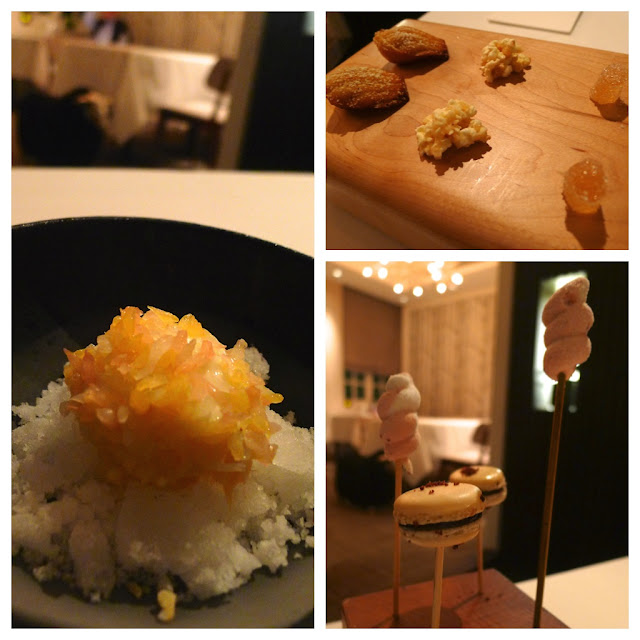 ‘Petit fours’ featured madeleines, butter popcorn with popping candy and fruits pastilles and a variety of sweet treats on sticks.

There was an option of a cheese course. I asked what cheeses were available as I would have ordered it if there had have been an interesting selection; maybe something that I hadn’t tasted before or even some favourites. Unfortunately, my question was met with what I felt was a dismissive response along the lines of, ‘One goat, one sheep, one cow.’

This was indicative of the service throughout – my wife and I felt we were often being ‘treated like fools’ or ‘patronised’. Perhaps many of their customers have no real interest in food and just eat there for some sort of kudos? It was a huge shame that for us, the whole experience was let down by the seating arrangements and a feeling of being patronised.