* Sushi Ichi was awarded a Michelin Star in 2016

Ginza Sushi Ichi is the Singaporean outpost of the Michelin starred restaurant bearing the same name in Tokyo.

On my previous trip to Singapore I dined at two of its most well respected sushi restaurants; Shinji by Kanesaka (see here) and Les Amis’ Aoki (here) but Ginza Sushi Ichi is the first in town to offer an exquisite degustation menu featuring top-tier Kyoto Kaiseiki Ryori as well as premium Sushi. 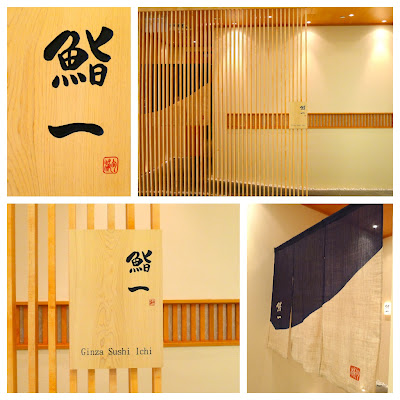 My Omakase (a Japanese phrase that means "I'll leave it to you") was overseen by the affable Executive Sushi Chef, Kimura Tomoo. The only choice I made was to order a wonderful Hakuryu Daijingo Sake.

As with all ‘high end’ sushi restaurants in Singapore, only the finest ingredients are imported, four times a week from, Tokyo’s famous Tsujiki market.

The artistically prepared and arranged appetiser selection showcased: Prawn Ball with Sesame, served in a glass garnished with a Japanese maple leaf; a sweet, plump King Prawn with a bitter-sweet Matcha infused Mayo and Shishitō - the chargrilled tip of a tōgarashi pepper. 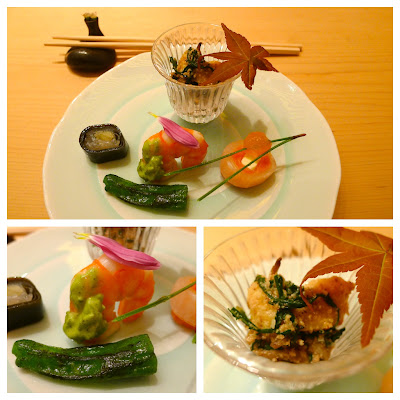 The selection also included Salmon wrapped with daikon and Flounder wrapped with fresh seaweed. The fish in both instances was served raw (‘Nama no sakana’ is the Japanese way of saying ‘raw fish’; sashimi is used to describe fish that has been sliced and served with a dipping sauce). 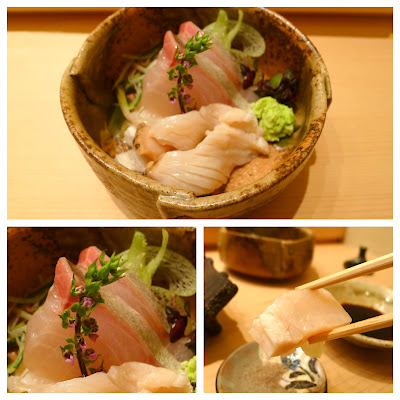 Following the appetisers, the first sashimi platter featured Aji (Japanese jack mackerel), Conch (which I think is called Sazae) and Awabi (Abalone). I am a huge fan of Aji, which is a type of jack fish, as opposed to a mackerel and as a result it is more buttery than oily. The Abalone was the best I have tasted; it maintained its subtle briny flavour but was much less chewy than on previous encounters. 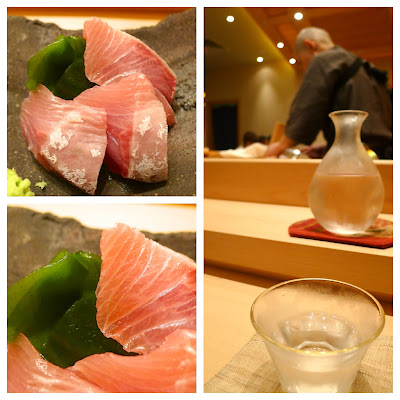 Up next, more sashimi - this time, young Yellowtail (Japanese Amberjack) known as Inada. It had a much richer flavour and fat content compared to the previous selection and was therefore paired with salty wakame. 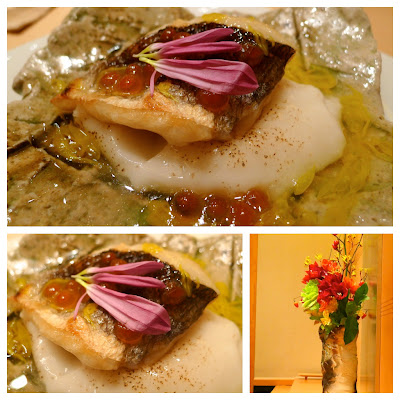 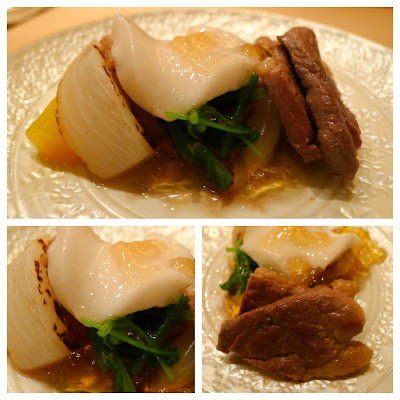 The main event in my omakase lunch featured a series of ten perfectly formed, perfectly seasoned ‘Nigiri sushi’. For me, as long as the fish is fresh even bad sushi is good… but good sushi is simply divine! Ginza Sushi Ichi serve excellent sushi!

With just two main ingredients* (the sushi rice and a topping or ‘neta’), ‘nigiri’ may seem simple but, like many things Japanese, each piece is a perfectly balanced work of art with a strong emphasis on tradition, harmony, elegance, aesthetics, symmetry, texture and colour. 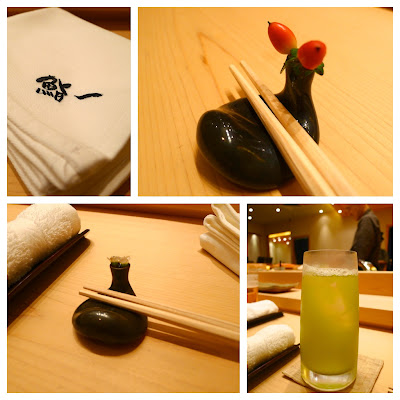 (*Depending on the type of neta, such as fattiness or oiliness of the fish, nigiri are often seasoned further with wasabi, ginger, soy, salt or similar.)

Such things are also important in shodō, ikebana and other Japanese art forms. Even the art of Japanese architecture plays its part; as toppings draped across the rice can be reminiscent of the curved eaves of Japanese temple roofs (yane).

In high end Japanese restaurants such as Ginza Sushi Ichi, the itamae-san also bring theatre, ceremony, speed, dexterity and poetry to the experience.

The choice of neta may define the type of nigiri but the, all important, rice should not be overlooked. Perfect ‘sushi-meshi’ has to be good quality; cooked well; seasoned and vinegared to perfection; glossy; not too sticky and served at the correct temperature (room temperature, tepid or lukewarm). Here, the rice was served at room temperature. 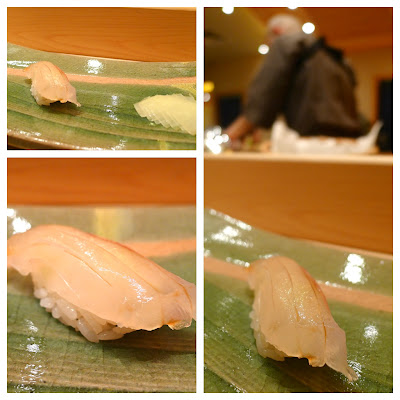 Tai - Sea Bream. The first of my ten nigiri to arrive featured a ‘neta’ of sea bream (tai, in Japanese). Sweet and delicate, I found it had an almost floral quality. 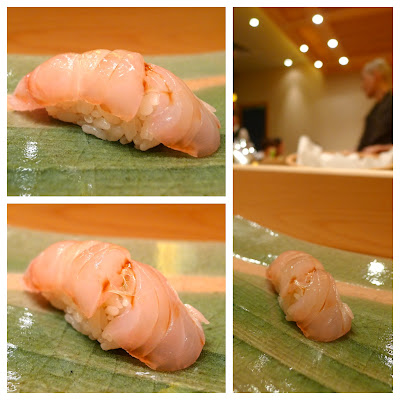 Suzuki - Japanese sea perch. With a beautiful pale rose colour, I found this fish and a mild flavour and a pleasantly firm flesh. 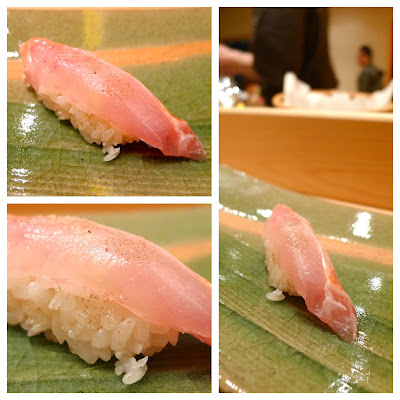 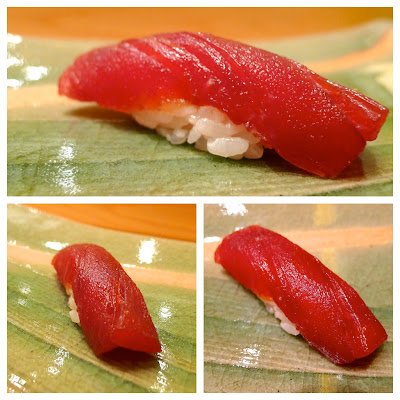 Maguro Akami – soy marinated Bluefin tuna. The lean, deep red flesh known as ‘akami’ comes from the top part of the tuna. Soy sauce shares an excellent synergy with tuna – this was excellent, having been marinated for a few minutes in the good stuff. 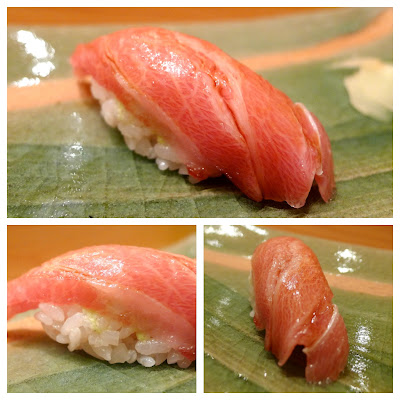 Maguro Ōtoro – fatty portion of the Bluefin tuna belly. Speaking of the good stuff, Ōtoro is the Rolls Royce of tuna sashimi – the high fat content giving it the most magical melt in the mouth texture and flavour with just a light brushing of soy and a generous swipe of wasabi. 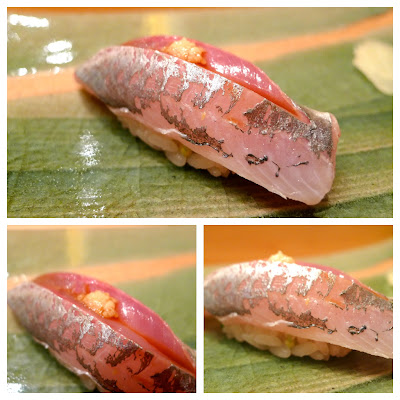 Ma-Aji – Japanese horse mackerel. ‘Aji’ can refer to a number of varieties of house mackerel; fittingly, it’s also (I’m told) a homonym for ‘taste’… of all the fish tasted, the firm, oily flesh of the Ma-Aji had the most striking subtle spicy flavour, lifted further by a speck of freshly grated ginger. 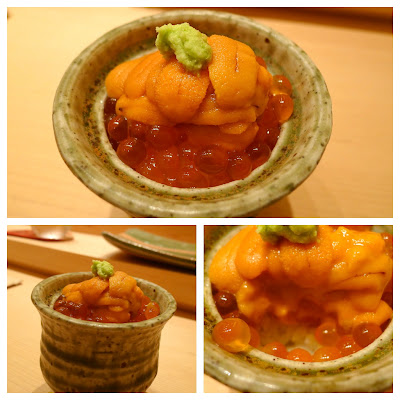 The next dish was the stand out one for me, an indulgent amount of firm, sweet, golden, grade A sea urchin gonads, Uni & Ikura over more of the perfect rice – a festival of flavour! 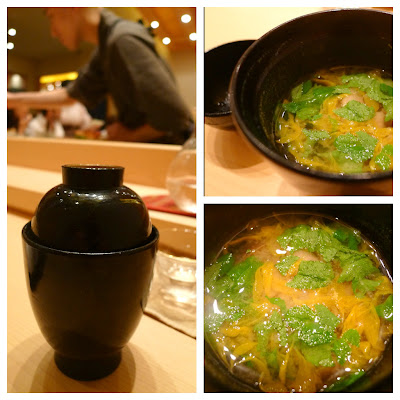 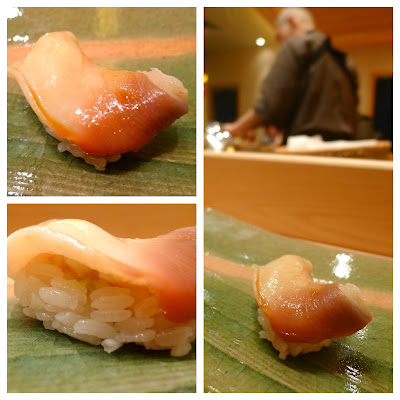 Hokkigai – ‘Venus Clam’. I was presented this as ‘Venus clam’ which I think is a type of ‘Surf clam’. When raw, the foot of the clam is a blackish colour – the reddish brown hue develops after dipping in hot water. It’s not usually a favourite neta of mine but this was exceptionally good - firm and ‘crunchy’ but not at all tough and chewy (as it has been when I’ve had it previously). 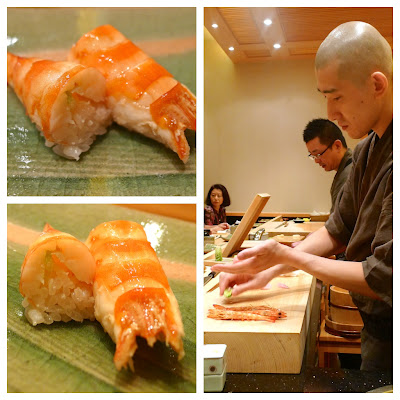 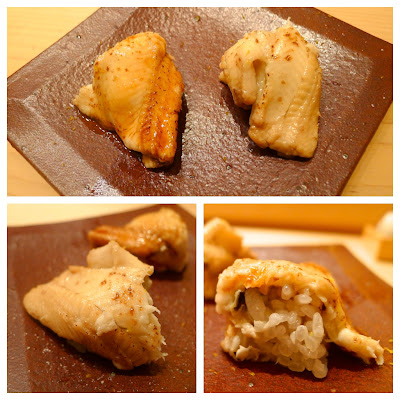 Anago - sea eel. The anago nigiri came served warm; two ways: one piece with a sweet sauce and the other simply salted. It had the most beautiful creamy texture. 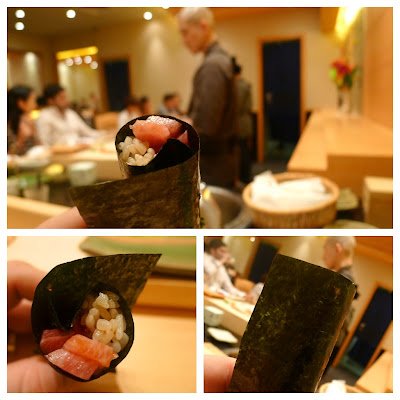 Ōtoro Temaki – fatty tuna hand roll. The last savoury dish of the lunch starred more of the delicious ōtoro. This time wrapped with rice in a hand roll. 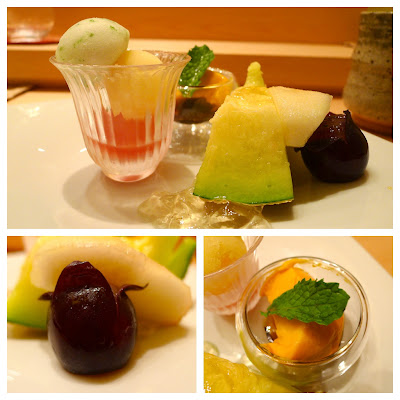 A trio of delicate desserts ended the meal: Mint, orange and watermelon sorbets; Pumpkin and Red bean Anmitsu and fresh fruit, Japanese grape and melon with a boozy brandy jelly.

For me, there is nothing to choose between Shinji by Kansaka and Ginza Sushi Ichi (both of which I feel have the edge on Aoki). Perhaps Shinji is a little more special because of its Raffles location but both serve some of the best sushi you will find anywhere outside of Japan.