A Tale of Two Piccolinos – Manchester vs Bramhall 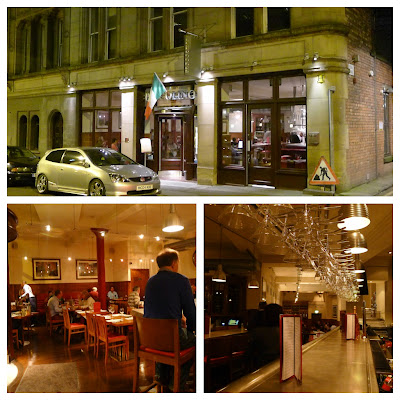 The tale starts well with our trip to Piccolinos in Manchester, just off Albert Square. A typically swarthy, smart and handsome Italian gentleman in a fine suit greeted us warmly. As we were early, we were given a seat at the bar and some complementary olives – excellent service, which stayed this way throughout the meal. 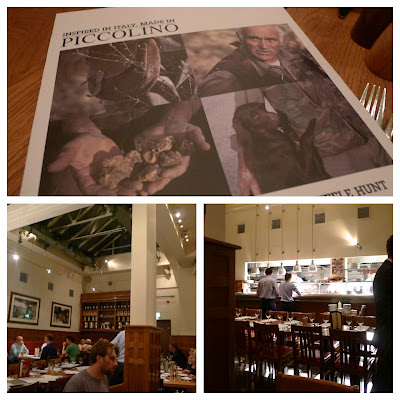 There was a great atmosphere although at times it was a little too loud to be heard by my wife when I was speking. At the end of the meal, the maître’d offered us one of their 'Club Individual' cards. Reward cards, such as Tesco Clubcards, Nectar points and the like, are not something I typically bother with but having enjoyed the night and most of the food I uncharacteristically accepted.

What we ate - Manchester: 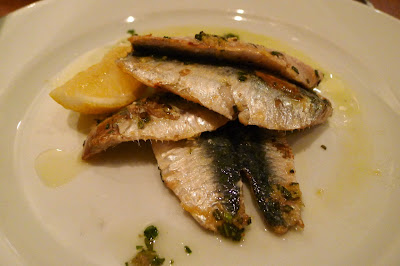 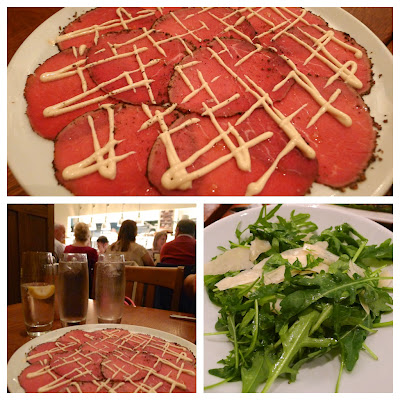 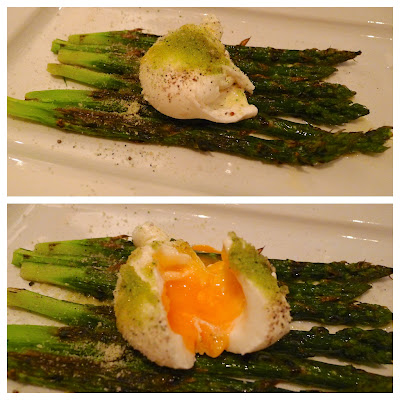 Asparagi – grilled asparagus with soft poached egg and herb breadcrumbs. The poached egg was spot on but we found the asparagus a little withered. 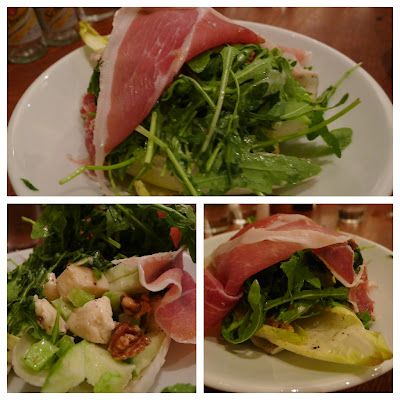 Gorgonzola e mele – insalate of Gorgonzola cheese, chicory, apple, celery & walnuts. A good salad of tried and tested flavours (I was pleased but a little surprised to find the slice of Prosciutto ham as it wasn’t listed in the description – I imagine it would not be such a treat for non-meat eaters). 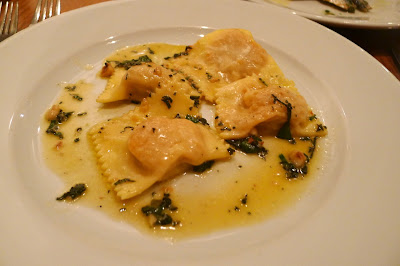 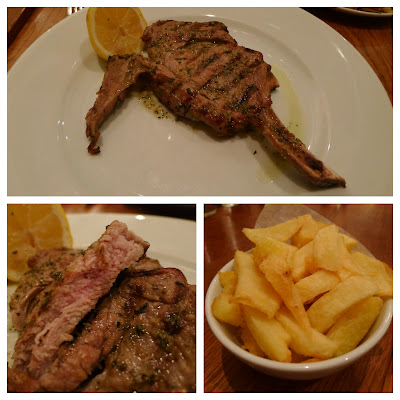 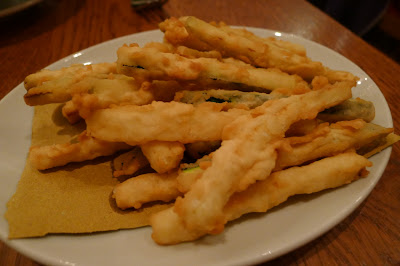 Zucchine fritte – ‘crispy’ courgette, sea salt. The batter was a little stodgy and I’d have preferred a little more crispness… they were still tasty though and were all eaten up!

A week or so later, the card arrived along with a letter stating that it was now 'fully active' and loaded with a 'welcome gift of £20'. I thought about checking out Zinc or the Restaurant Bar & Grill in town or Alderley edge but my wife fancied another carpaccio so instead we booked the Piccolino in Bramhall. 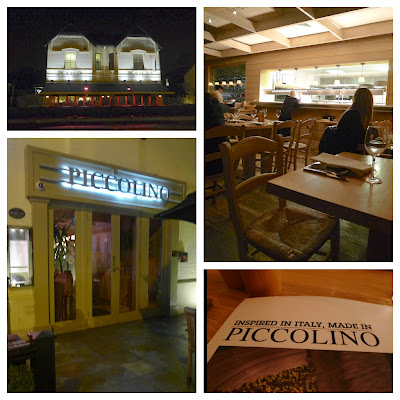 I made a reservation online and by eight had ordered drinks and a bowl of olives to enjoy whilst we perused the menu. Whilst we were perusing said menu, another waitress came along and bizarrely (considering we clearly already had some in our hands) tried to give us another copy of the menus, the wine list and the specials menu.

When we pointed out (in a way that was much less sarcastic than this paragraph implies) that the A3 pieces of card with Piccolinos on them that we were holding in our hands, were in fact ‘Piccolinos menus’ she apologised and asked if we'd like to order drinks... as we both had full glasses which had only moments before been placed there, we thought we'd be ok for a bit.

My wife could see that this had irked me and urged me to forget it as we were there to have a good night. I put on a smile whilst quietly seething inside, hating the blatant incompetence and total lack of awareness from the waitress. Anyways… we placed our orders.

What we ate (and didn’t eat) - Bramhall:

Olives – I can’t comment on these as they didn’t arrive. I can tell you that they were £3.75 as they were included on the final bill. 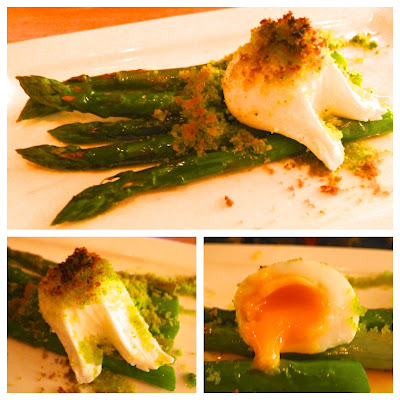 Asparagi – grilled asparagus with soft poached egg and herb breadcrumbs. The asparagus were cooked much more pleasingly than in Manchester… crisp and cooked with a bite (not at all withered). Another perfectly poached egg! 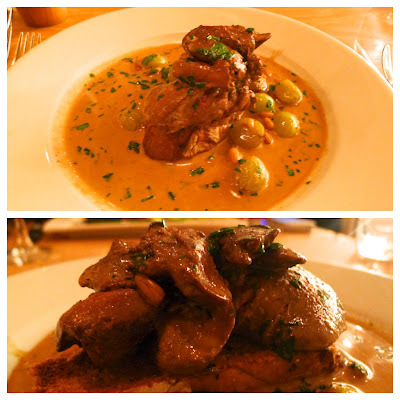 Fegato alla crema – chicken livers, marsala cream, green grapes & pine nuts. This dish disappointed... I found the 'toast' chewy and the sauce to be watery, bland and under seasoned. However, the livers were cooked well and by adjusting the seasoning myself I managed to ‘salvage’ the dish as a whole. 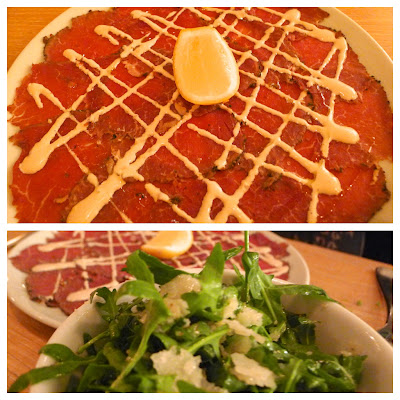 Carpaccio – thinly sliced, 28 day aged, peppered Limousin beef fillet with rocket, Parmesan and ‘Venetian’ dressing. The carpaccio was still good but making a direct comparison with the one we had in the city centre is did nor appear to be quite so fresh and the cheese had been crumbled as opposed to the large shavings in town. 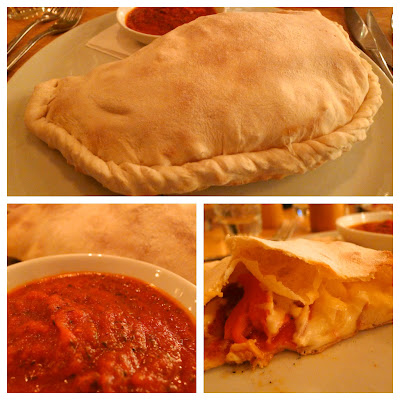 Calzone – folded pizza, spicy sausage, mozzarella, tomato, red pepper & chilli. There was nothing majorly wrong with it but it just seemed a bit lacklustre. The sauce again seemed under seasoned but it filled a hole. 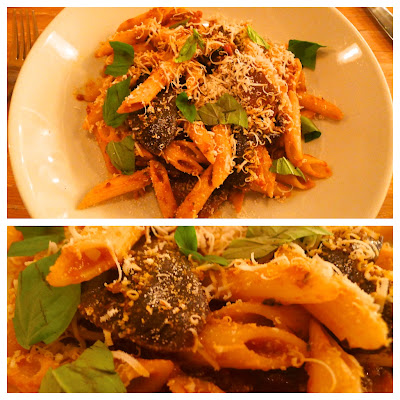 Penne alla Norma – aubergine, chilli, San Maranzo tomatoes, basil & salted ricotta. I found the penne woefully over cooked and under seasoned. The overall texture seemed to be 'mush' with the aubergines reminding me of large garden slugs. 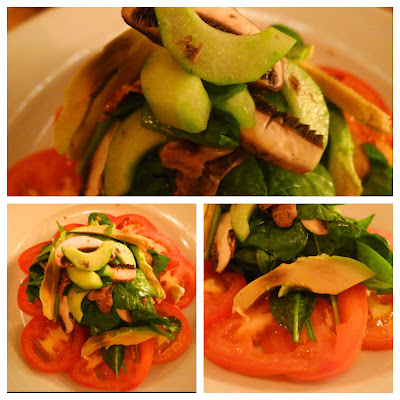 Largely unimpressed by the food and service so far, we decided to skip dessert and coffees and asked for the bill.

As it was brought, I presented by 'Club Individual Card'.

The waitress (the same one that didn't bring the olives but a different one to the one that ignored the fact that we already had menus and drinks) soon returned to tell me how the card had not been registered and that there was no 'money on it'.

Luckily, I also had the letter on me from them that said the card had indeed been activated and that it indeed contained '£20' of credit. She glanced at the piece of paper without reading it and told me, in a "Computer says no!" style, 'No, you first have to register the cards.' and proceeded to tell me that she has swiped it though 'the machine' and that I had not registered it.

I again tried to point out that regardless of what her 'machine' said, my letter said that my card was active and that I was entitled to £20 off the bill. The bill came to £82 (including the £3.75 olives which we didn't receive) so fed up of 'arguing' I said to the waitress, "Here's what I'll do, I'll leave you £60 cash and the card and letter and you can sort it out after I've gone." and I got up to leave.

The waitress continued to argue and told me I’d have to pay and then phone the ‘head office’.

I again pointed out that I was in possession of a letter from ‘head office’ stating that my card was active and loaded with £20 and this was the reason we had decided to dine there. I reaffirmed that I’d be prepared to pay £60, which even included a tip!

She went to get the manager.

The manager caught up with me as I reached reception. I explained the situation and what had happened with the waitress and showed him the letter. To his credit (unlike the waitress) he actually read it; apologised and said that it was ok to pay £60.

What I didn't like was the way he said this, as if he was in some way doing me a favour and he too started going on about 'the machine' as he went to give me the card back.

"Keep it," I said, "I won't be eating in any more of your restaurants."