With my wife visiting her sister in Bahrain, the way I saw it, I had a couple of options. 1) Sit home alone with a take away watching subtitled Japanese films with swords or 2) Jump in the car and travel to one of the best restaurants in the country.

I choose option 2 – after work, I set off to make the 90.7 mile route in the driving rain down the M6 and across the A50 to Nottingham and Sat Bains’ two Michelin starred restaurant, which bears his name. 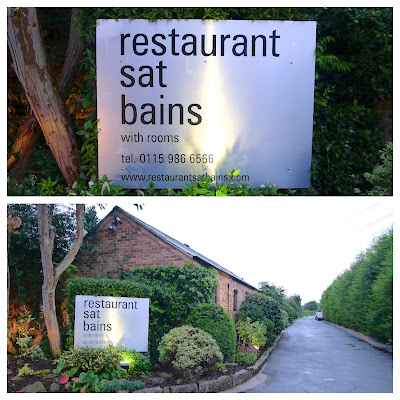 Despite the awful conditions and frequent radio announcements of floods and motorway closures, I made the journey in good time; my trusty Sat Nav delivering me to the door of Sat’s notoriously difficult to find restaurant. Buoyed by excitement and thoughts of the last time I had eaten Sat’s foot at The Cube (see here) the drive passed quickly.

The moment I stepped inside the restaurant, I knew straight away that this was the type of restaurant my wife and I would love – it was just a shame she wasn’t there with me. Despite the rain outside and stone floors and exposed brickwork inside, there was a warm feeling about the space. 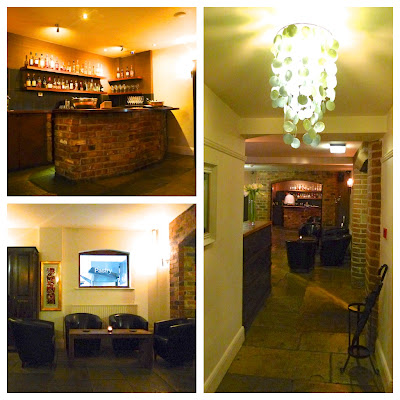 As I sat perusing the menu (choosing between the seven or ten course; as if there was any doubt as to which I would have), Sat came though to talk to his maître’d. He smiled and nodded as if he recognised me from somewhere…

On his way back though, the restaurant manager was just saying to me, ‘I see you have eaten at The Cube.’ (when booking, I was asked if I had eaten at the restaurant before.) 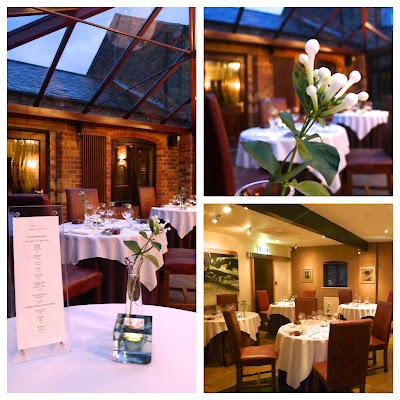 Sat turned back around, he had clocked it, “I thought I recognised you!” he said, shook my hand and said he hoped I’d enjoy my meal. 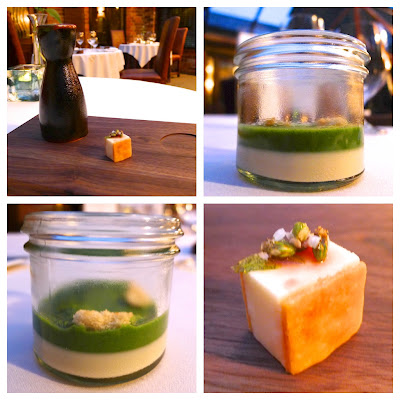 NG7 2SA : the amuse bouche bears the same name as the restaurant’s postcode because all the main ingredients are foraged from the fields surrounding area. This one came in two parts and featured horseradish ice cream sandwich and a subtle horseradish panna cotta with a nettle velouté. 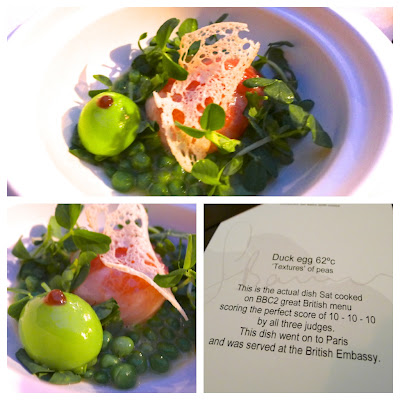 Duck egg 62°c ‘Textures’ of peas – This dish (an optional extra) is the one Sat cooked on the Great British Menu, scoring a perfect score of 10 from each of the three judges; going on to be served at the British Embassy dinner in Paris. 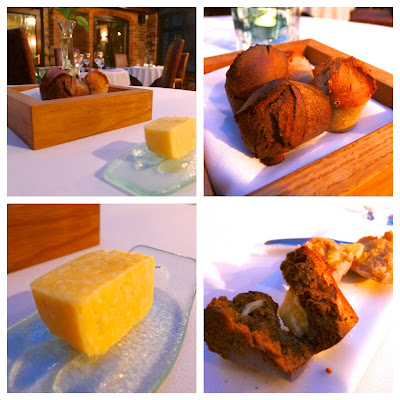 Breads : white bread, treacle bread with a Lincolnshire Poacher butter – these were a revelation… breaking them open, they seemed as if they were going to be firm and chewy but once buttered they were light and very flavoursome. The treacle one was my particular favourite (I lost count of how many portions I had.) 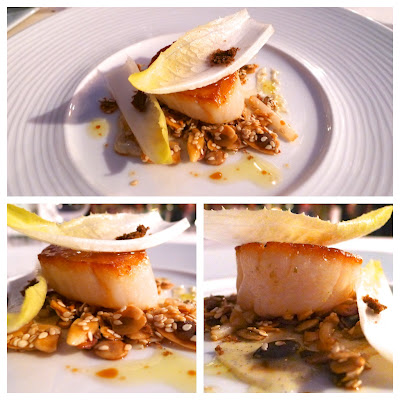 Scallop : muscavado, chicory, vanilla – flavour is central to Sat’s menus and each dish on the menu is accompanied by a flavour key represented by coloured dots which indicate if the dish has Salt, Sweet, Sour, Bitter & Umami flavours – the size of the dot indicates its prominence. The scallop dish indicated salt, sweet from the sugar, vanilla and scallop a little bitterness from the chicory and a hit of umami from the combination of nuts, seeds and the molasses in the muscavado and caramelisation of the scallop. 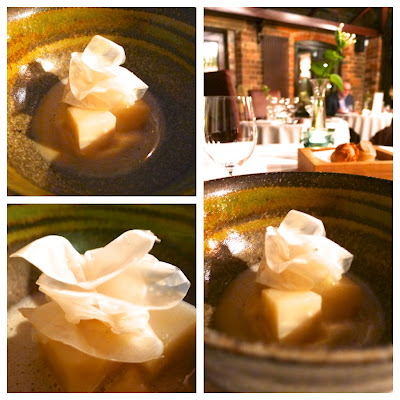 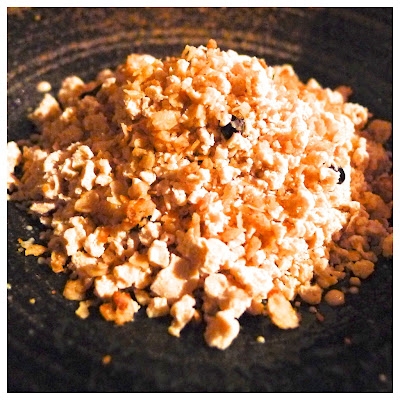 Duck ‘muesli’ – for me, this was the star dish… it reminded me of David Chang’s ‘shaved foie gras with lychee, Riesling gelée and pine nut brittle’ that I had a Momofuku Ko (see here). The silky, smooth duck liver parfait, fine beans, granola, cranberries and apricot purée were all served just above icy cold and seemingly melted on the tongue – perfection! 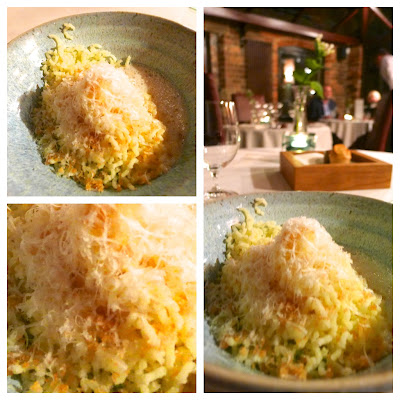 Fish Pie – I’ve just used the word perfection to describe the previous dish; it’s not a word I usually use so freely, especially when describing an entire dish but this ‘fish pie’ made with Pollock, thyme, buttery mash, breadcrumbs, Parmesan and a sprinkling of Sat’s special alchemy made this, quite simply, the best one I’ve ever tasted. 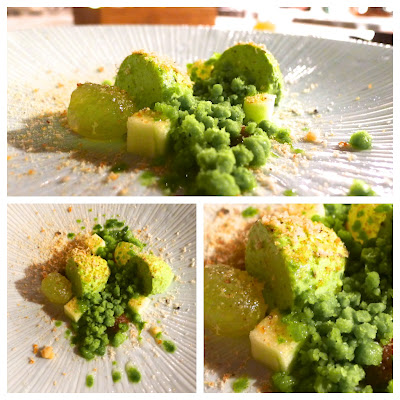 ‘Waldorf’ salad 1893 ~ 2012 – when in New York, we stayed at the Waldorf Astoria and of course had the classic Waldorf Salad in the Peacock Alley Restaurant – aside from the main component ingredients this 2012 reworking from Sat bore no relation to the original – a masterpiece probably more at home in the nearby Museum of Modern Art. 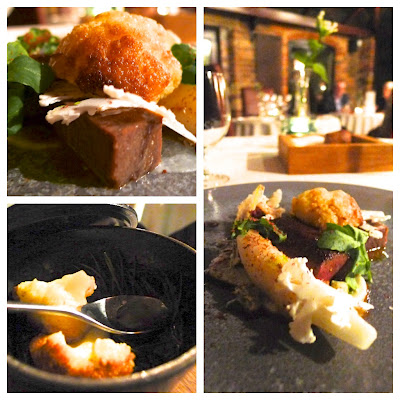 Yorkshire Hare : cauliflower, pear, blue cheese, chocolate – this was the one dish that didn’t really work for me. I love blue cheese but, referring to Sat’s own taste key, its ‘spicy, sharp, acidic, sour notes’ competed too strongly with the overall umami elements of the dish. The hare itself was immense and the cauliflower components shone.

It was at this point that the waiter asked if I was still hungry. Anticipating being offered the supplementary cheese course I quipped, “I’m always hungry.” Instead I was informed that Sat wanted to send an additional main course; the partridge… “Result!” 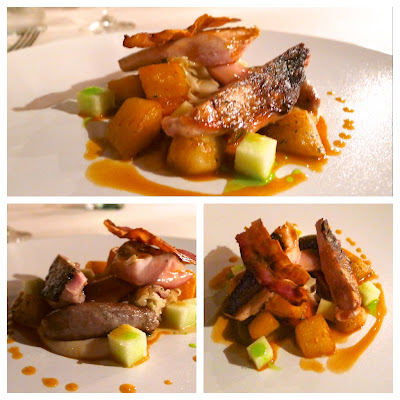 Scottish partridge : roast roots, cabbage, thyme gravy – as a main, this one was more up my alley than the hare and I’m really grateful that I got the chance to taste it. The partridge had been cooked sous vide at 54°c resulting in a sublimely smooth and buttery texture. The roasted roots added a sweetness that synergised with the over all flavours. 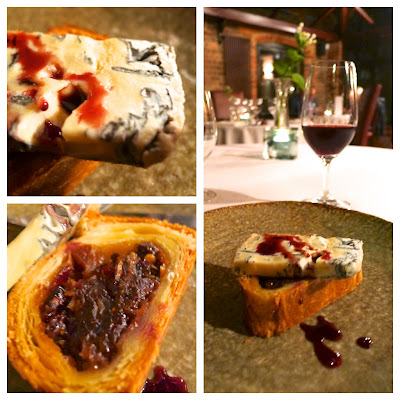 I’m usually pretty fussy with my ports and was initially disappointed when the sommelier informed me that they do not serve Vintage Ports or Colheitas and instead suggested a late bottle vintage - 2004 LBV Quinta da Gaivosa, Alves de Sousa. Fortunately, it was indeed an inspired selection and the sommelier was spared having to kill himself as he jested he would if I did not approve. 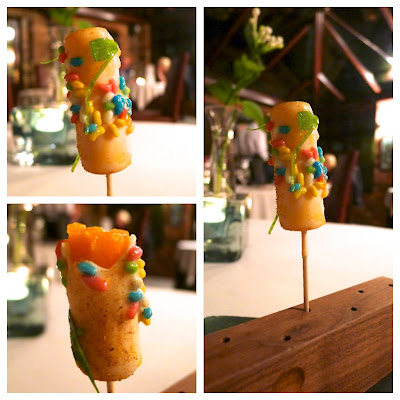 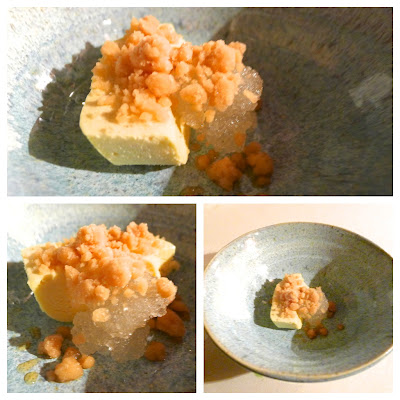 Jelly & Ice cream : pine, earl grey – as the dish was set in front of me the unmistakable scent of earl grey wafted up. The jelly initially reminded me of hydrated Miracle Gro Water Storage Gel that you can buy for pot plants but I imagine it tasted better. 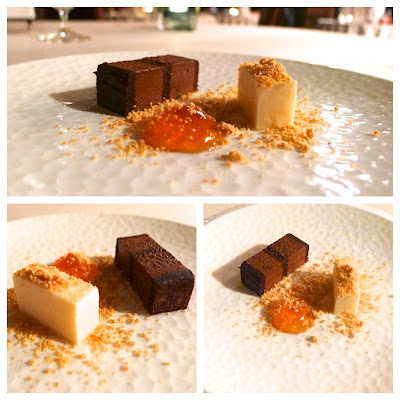 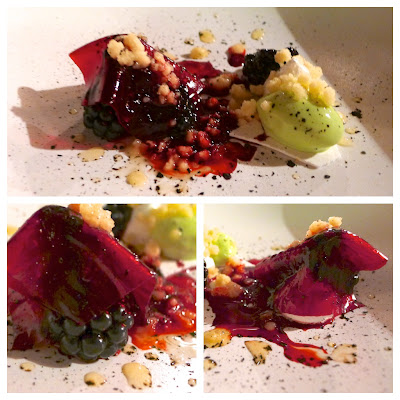 Blackberries : beetroot, tarragon, liquorice – the ‘final’ dessert of the tasting menu was the fruity splash of flavour and colour.

As the meal came to an end, I anticipated ordering a tea before making my way back home… but then the waiter asked, “Would you like to come through to the kitchens? Chef has some additional desserts for you.” or some such words.

I had seen pictures online of Sat’s ‘Kitchen Table’ situated in their separate development kitchen… but I was led into the main kitchen to the brand new ‘Chef’s Table’. 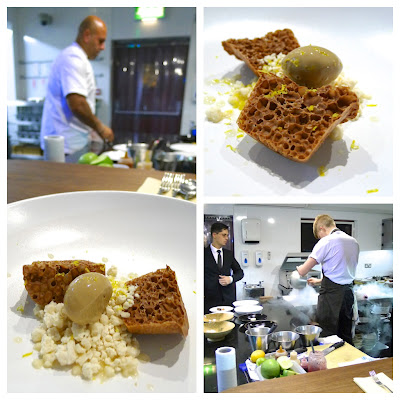 For a self confessed ‘food nerd’ like me, being able to glimpse into the fully functioning heart of this amazing two Michelin starred restaurant was sensational – I felt as though Christmas had come early! 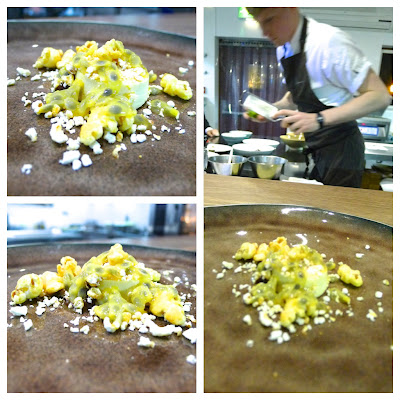 Sat prepared me two additional dishes himself, an ‘aero’ like Chocolate dessert and the most wonderful Sweetcorn and passion fruit dish that was undoubtedly my favourite sweet of the evening. 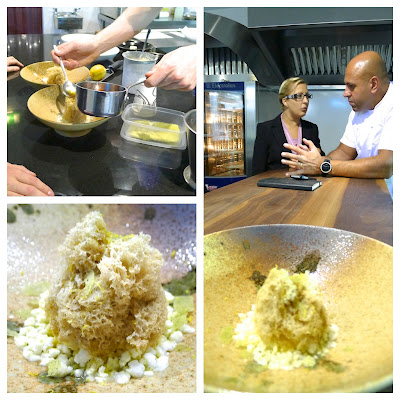 I stayed and chatted for a bit more to Sat and his team about food and travels, eating a Treacle sponge : inspired by Albert Adrià and then finished with the Chocolate log and a pot of Japanese Sencha. 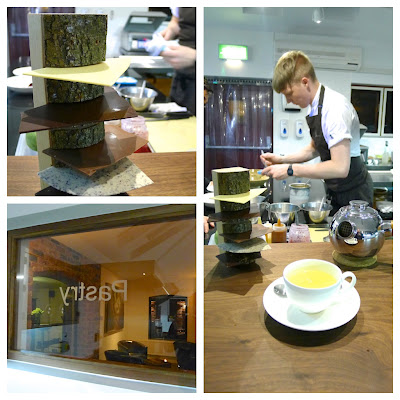 Chatting to Head Chef John Freeman I was astonished to discover that, even though many of them had already worked a fifteen hour day, most of the kitchen staff were heading off to the new 24 hour gym…obviously thinking that I should really start to work off the ten courses; copious amount of bread and six desserts that I had just eaten, they even asked me along!

I had work they next day and, unbeknownst to me, I still had a three hour drive to get home; including missing my junction on the motorway (twice) and a horrendous drive over Snake Pass at 1am in the driving rain with near zero visibility.

One of the best meals and evenings of my life.

Verdict (Would I return?): In a heartbeat - Sat Bains is a ‘Restaurant with rooms’ and I plan to return with my wife as soon as possible!