Regular readers of my blog will know that I love Marc Wilkinson’s Fraiche in Oxton (not Birkenhead) on the Wirral. You may even know that I love my wife, jokingly referred to recently as ‘The Hungry Mare’ (which I promised I wouldn’t mention here).

Of course, in private I tell her that I love her every day but, commercial baloney as it may be, Valentine’s Day is the one day of the year when it’s ‘acceptable’ to make a public show of such affections.

As someone who, usually down to laziness, eats out a lot throughout the year, Valentine’s Day is a time when I traditionally make an extra special effort to plan and cook a romantic meal at home – one year, I remember making Hakkasan’s salmon and seabass in Champagne sauce that went down a treat.

A typical restaurant at Valentines seems to think that a Rosé prosecco cocktail on arrival, a couple of red balloons and some table confetti is reason enough to charge a premium. Occasionally they may also go to the trouble of planning a menu that is likely to include tomatoes because someone has told the chef that they are also called love apples.

For this reason, my wife and I usually avoid restaurants each year on the 14th February. This year, however, my eagle-eyed wife spotted a tweet by @marcatfraice saying that a rare cancellation had became available at Fraiche. For us, along with dining under the stars on the cliff tops in Jamaica and on a tropical beach in Bali, Fraiche is undoubtedly one of the most romantic of place we have eaten.

The sense of calm, harmony, luxury and indulgence that permeates Fraiche’s dining room; along with the feeling of enjoying being somewhere so special together, has thus far been unmatched by any other restaurant experience. Knowing the amount of time, imagination and passion that Marc always puts into his menus, I had every confidence that his Valentine’s Menu would be nothing less than exemplary. 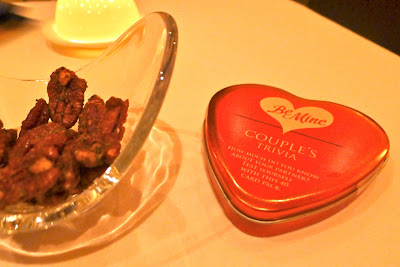 Alongside the usual spiced pecan appetiser was we were excited to see a heart shaped tin containing ‘Couple’s Trivia’ – great idea, but we did almost fall out when I didn’t know my wife’s eye colour… all I know, is they are beautiful; the colour is immaterial. Save! (Guys, another top tip: If your partner catches you checking out someone else, just say, “I picked you because you are the most beautiful girl in the world; I’m just looking to make sure that’s still the case) 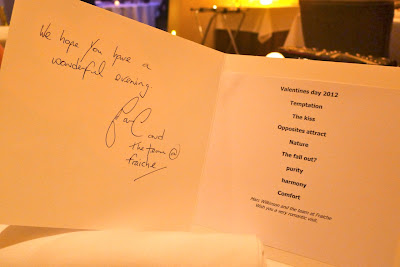 We were then presented with an envelope and a gift box. The envelope contained a Valentine’s card with the evening’s menu and a greeting from Marc and the team wishing us a wonderful evening. The menu was imaginatively created to chart the course of a relationship. 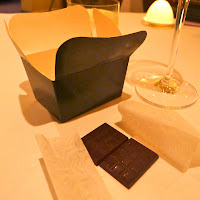 The gift box contained the first of the evening’s enticements, presented as ‘Temptation’; an alluring salted berry chocolate - rich and silky smooth with zingy fruit notes. 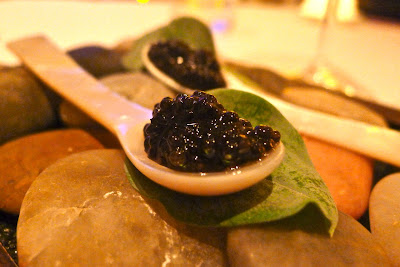 Leading us further into temptation (but in no way delivering us from evil), when we saw James carry the familiar wooden boxes set with pebbles, we assumed we were about to receive a familiar oyster leaf. We were, but instead of being paired with a champagne or sea buckthorn ‘dew’ as on previous occasions, this time, served on beautiful mother of pearl spoons were treated to some heavenly Ebène Caviar (from www.finefrenchcaviar.co.uk).

Of course a dish like this does not show off Marc’s skills as a chef but it does highlight his commitment in wanting to provide guests with a truly memorable experience by sharing the best ingredients available. 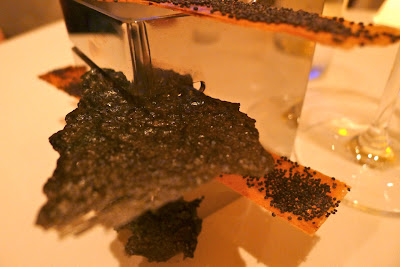 By the time the squid ink crisps and poppy seed biscuits arrived, the temptation was complete. We were ensnared and ready to pucker up for ‘The Kiss’. 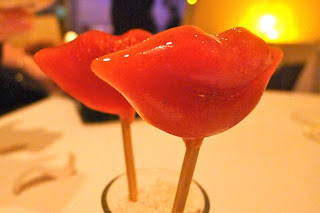 It was Mae West who inspired Salvador Dalí’s famous ‘Lips Sofa’, she once said, ‘A man's kiss is his signature’ and Marc’s Dalíesque creation smacks of being a future signature dish. Michelin starred food often looks too good to eat, but rarely do you want to kiss it. 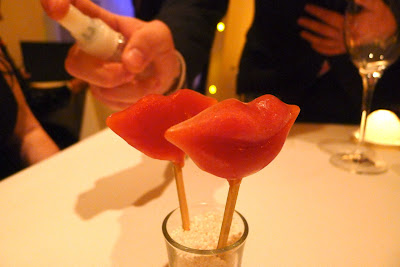 The cherry red lips were presented as ‘Virgin Mary lips’ but we were given the option via an atomiser of vodka to make them into ‘Bloody Mary lips’. Mae West also said, “I used to be Snow White, but I drifted.” - in homage to her, so did we! 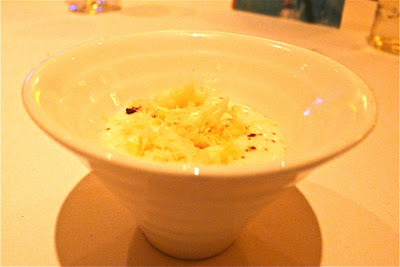 ‘Opposites Attract’ was constructed from four main flavours: potato, coffee, almond and Montgomery Cheddar. I know what you are thinking, ‘That sounds so wrong!’ or ‘Soooo wrong!!!’ if you are down wid’ da kidz; but note the title… it actually worked - pure alchemy! 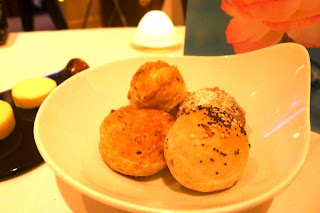 Breads, consisting of cheese, five nut, mixed seed and as always, my favourite, granary and treacle. 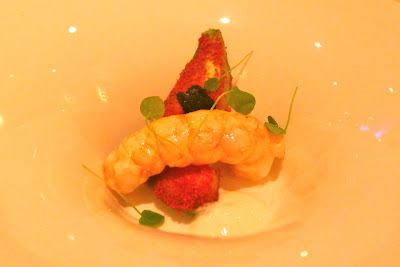 Next up, ‘Nature’ - the star of this dish was undoubtedly a wonderful quality Langoustine barbecued in one of the in-vogue Kamado style ‘Green Eggs’. Completing the dish buttermilk, ‘coal’ and tomato ‘powder’ encrusted avocado. 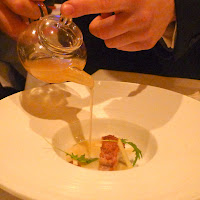 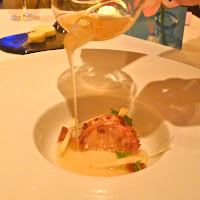 Entitled ‘The Fallout?’ the next dish featured pain d'épices coated Foie Gras with a vanilla infused apple soup, shards of apple and a white port jelly. I don’t know why it as called the fall out, maybe because opinions are divided over foie gras? In mine and my wife’s case, our opinion was united – we loved it! 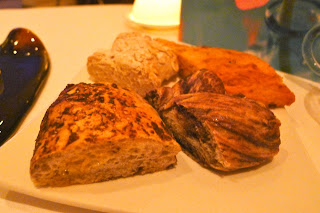 More breads, consisting of organic oat, tomato, mushroom and, my pick of the bunch, black olive. Alongside the breads a sealed bag containing cocoa nibs and an onion with the information that all would be revealed later… most intriguing. 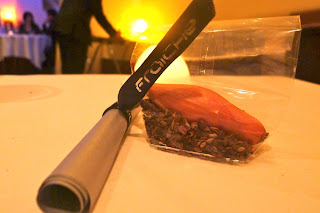 As James presented the ‘Purity’ he informed us that if we managed to correctly guess the ingredients then Marc had an extra course in store. Using a bit of knowledge about what white fish were in season, I correctly identified the brill and the accompanying fennel. For the delicious ‘jam’, expecting something unusual, I guessed at loganberries but I should’ve known that Marc is more creative than that – it was actually made from red grapes, flavoured with tamarind and rose water. 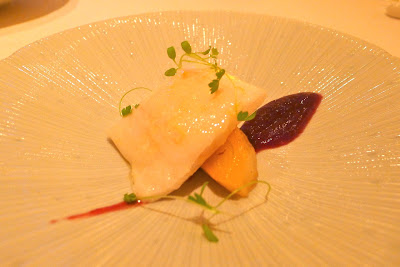 ‘Harmony’ is defined on dictionary.com as a consistent, orderly, or pleasing arrangement of parts; congruity. The following two courses harmoniously showcased the guinea fowl in such a sensitive and exquisite way. 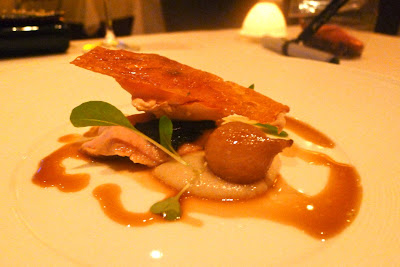 The first dish starred the guinea fowl breast, which having been sous vide for four hours was caressingly tender – complemented by a crisp made from the guinea fowl’s skin; an artichoke cream; shallot and a delectable shaving of truffle. 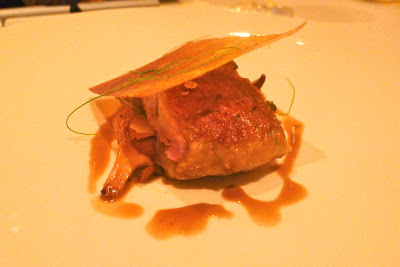 The second dish starred the guinea fowl thigh, with Girolles, a potato crisp and an adorable jus made from Cèpe and the remainder of the fowl. Whilst the texture of the breast was heavenly, the thigh dish was the most pleasing overall – as an ‘arrangement of parts’ the use of the same bird for two dishes was a wonderful and inventive demonstration of ‘harmony.’ 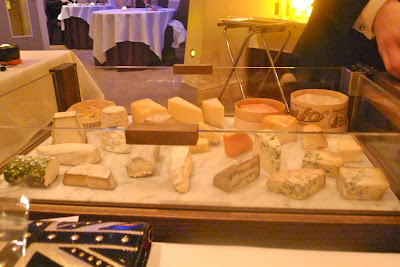 The Fraiche Cheese Chariot is something to behold and the condiment selection, second to none. Every time we visit there always seems to be a quality artisan cheese that we have not tried before; this time the goat’s cheese Taupiniere (meaning mole hill) was one such example - stronger and more pungent than many goats’ cheeses but still very fresh tasting with a silky smooth finish and subtle acidity. The Chevre St Maure was wonderfully ripe and also exceptional.

Last time we visited, I commented that I would have liked to have seen more hard cheeses on the board and was pleased to taste a quality Comté and a full flavoured Montgomery's  Extra Mature (18 Months) Cheddar. This time I selected three blue cheeses to compare; my preference in order being the Bleu d'Basque, Bleu d’Gex and then the Bleu d'Auvergne. 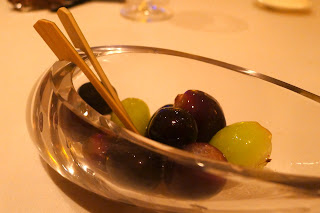 After the cheeses ‘Comfort’ ensued - the first sweet treat being an old Fraiche palate cleansing favourite of ours, Fizzy Grapes. Remember the onion? It was a clever reference to the ‘Valentine’ poem by Carol Ann Duffy. 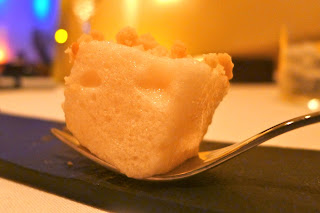 Ready to go on a fork, the next tasty surprise was entitled ‘Apple Pie’ – an amazing full on burst of apple pie flavour in one ‘marshmallowy’ bite. 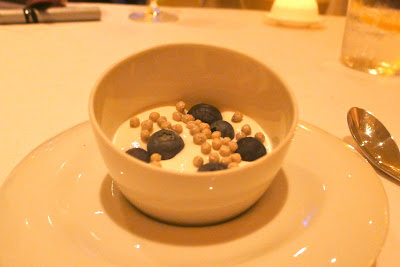 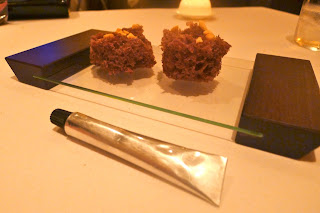 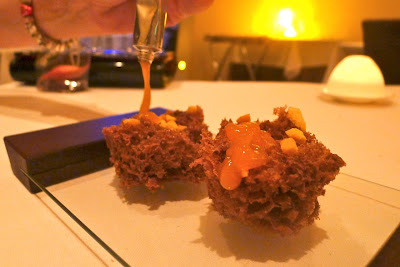 A welcome return for the Chocolate Cake with ‘Apricot Toothpaste’ – last time, in my excitement, I popped this in whole; this time I took my time and savoured the chocolaty flavour and blissful lightness of the sponge. 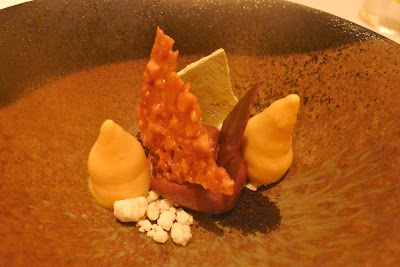 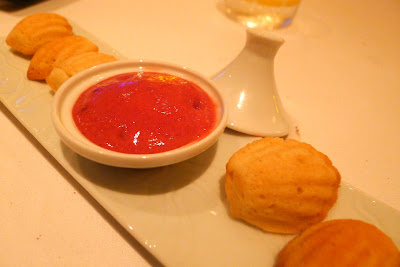 Anyone who reads my blog regularly will know that I love Fraiche’s usual pre-dessert of lemongrass panna cotta with sour cherry. Just when I thought we’d missed out tonight, cupid struck up his bow and fired a quiver full of delicious petite madeleines with the sour cherry used as a dip – cherubic! 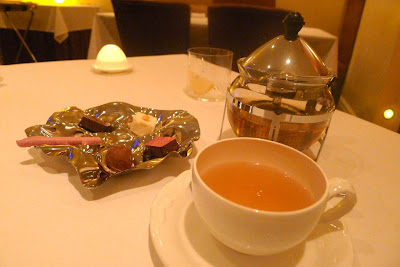 We finished the meal with a delicate Mount Fuji Sencha Green Tea and petit fours. A lovely end to the perfect Valentine’s Day meal conceived, created and served with love and passion by Marc and the team at Fraiche.