My very own Top Ten would not be complete or credible without an entry from Barcelona - a city which itself regularly features in (or leads) lists of the world’s top ten best gastronomical cities.

Barcelona, is Spain’s second largest city (after Madrid) and is the capital of the autonomous community of Catalunya. My love affair with the region began at an early age - my parents were regular visitors from the late sixties onwards and throughout my youth we took numerous Spanish holidays, favouring small fishing villages such as Tamariu, Sa Tuna, Salvador Dalí’s hometown of Cadaqués and St Marti d'Empuries (the home of many wonderful paella memories).

Modern chefs such as Heston, Ferran Adrià and the Roca Bros frequently talk about the emotion of food and the memories, when you taste something from your childhood, which it can arouse. Some of my most vivid gourmet experiences are rooted in the Catalan cuisine of my early family holidays. 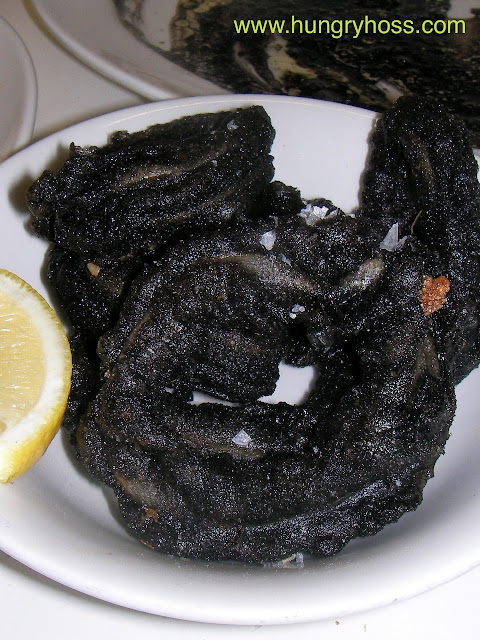 Of course, I have particularly fond memories of the fabulous Catalunyan seafood – and thoughts of squid cooked in its ink and Sardinas barbequed on the beach, served with traditional Pan con Tomate evoke just as much excitement and pleasure as thoughts of selecting a lobster from a huge restaurant tank. (To quote Adrià, “Remember that a very good sardine is always preferable to a not that good lobster.”)

Seafood is not the only cuisine of Catalunya, and it was in typically homely restaurants in picturesque medieval towns, such as Pals that I developed my adoration for rabbit and the regional specialty Mongetes amb Botifarra or beans and sausage (a world away from the Heinz stuff in a tin). Although, it was in one such restaurant that I had an unfortunate run in with a pig’s trotter - for a long time, they were one of the few foods that I was reluctant to try again. Until, that is, I had Marco’s (Pierre White) ‘Pig's Trotter Pierre Koffmann’ – I now love them.

Later on in life, I spent more time in the province, choosing to study part of my degree at the Universitat de Vic and teaching at a school in Cerdanyola del Vallès. It was during this time that I discovered the wonderful restaurants of Barcelona – or, more commonly on my student budget, the amazing tapas bars and the phenomenal La Boqueria Market. 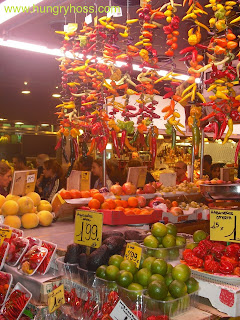 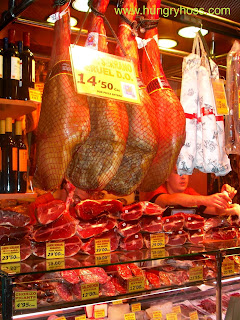 On recent visits to the city, as well as revisiting the traditional tapas bars, such as the excellent Cal Pep, I have ‘discovered’ the ‘new breed’ of modern tapas in places such as Ferran and Albert Adrià’s Inopia or, their former collaborator, Carles Abellan's Tapaç 24. 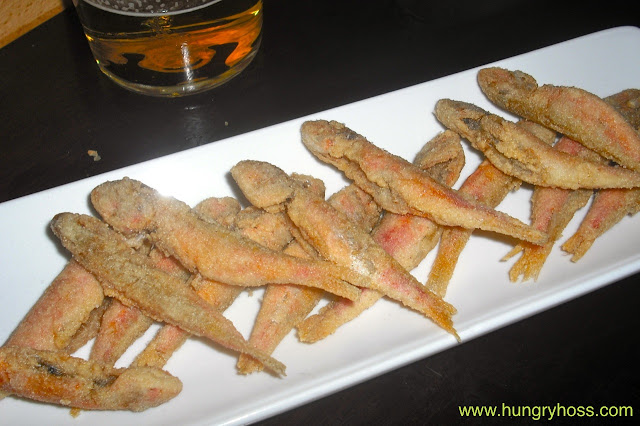 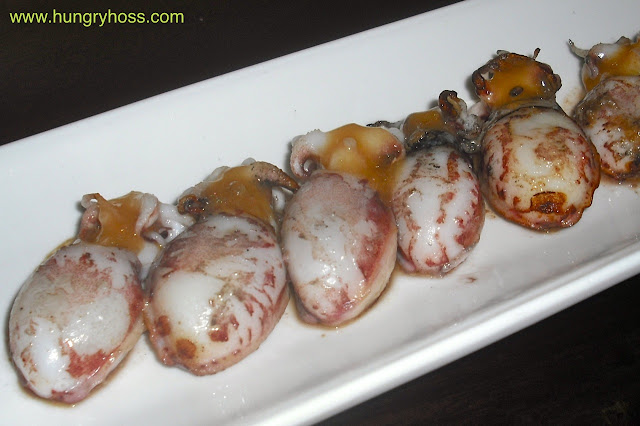 These, more informal tapas joints, excellent as they are, only hint at the decadent delights that Barcelona has to offer; namely a whole constellation of ‘estrellas de la buena mesa’ or Michelin stars. Sadly, despite regularly trying, I was never able to secure a table at elBulli prior to its recent closure and have yet to eat at (the current world’s number two restaurant) El Celler de Can Roca or Catalonia’s other three-starred restaurant, Sant Pau - hopefully 2012 will rectify that. I have, however, eaten at a handful of the city’s one-starred establishments and for me the pick of the bunch is Carles Abellan's Comerç 24.


Catalunya has a rich history with the arts. As well as the obvious, Salvador Dalí - Barcelona boasts the brilliant Picasso and Joan Miró museums and Gaudi’s magnificent buildings, Park Güel and masterly centrepiece La Sagrada Família.  Likewise, the literary luminaries Oscar Wilde and Ernest Hemingway are closely associated with the city, where they were known to frequent such hangouts as Bar Marsella, London Bar and Quatre Gats to knock back the occasional Green Fairy (absinthe). 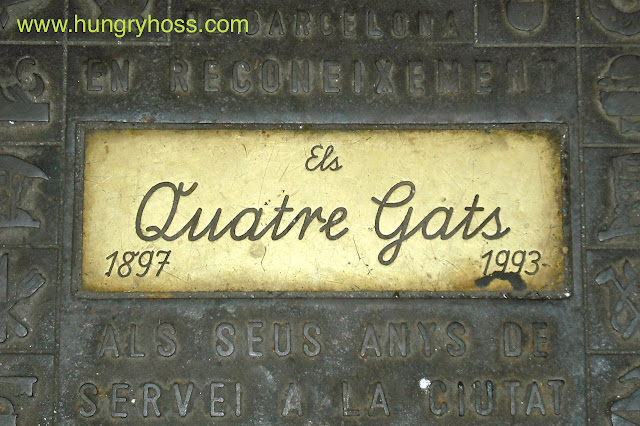 As an aside, for a more contemporary Barcelona born artist, check out the works of Jaume Plensa - the Catalan artist and sculptor responsible for ‘The Dream’ at the old Sutton Manor Colliery Site, Merseyside, which I often travel past, when on the M62. 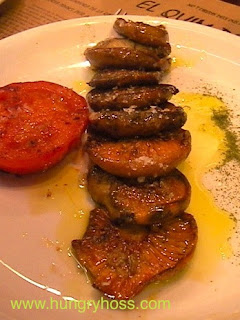 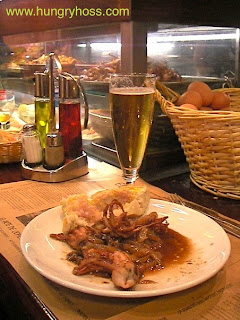 An artistic vibe still permeates the city but for me, the best art in Spain these days comes, not from painters, sculptors, writers or musicians but from the creative culinary genius of gastronomic gods such as Ferran Adrià and the Roca Brothers.

Although I have used this quote before (see here), Ferran once said, "Food is the new Rock 'n' Roll.” and one such undoubtedly Rock 'n' Roll chef and artist is Carles Abellan. Before the Harley Davison riding, Rolling Stones fan (he cites Mick Jagger dining in his restaurant as a highlight of his career) opened Comerç 24 and its subsequent offshoot enterprises, Carles worked at elBulli for seven years and spent further fruitful years heading up other Adrià projects such as the Olympic Port’s Talaia Mar Restaurant and the elBulli Hotel, Hacienda Benazuza in Seville. 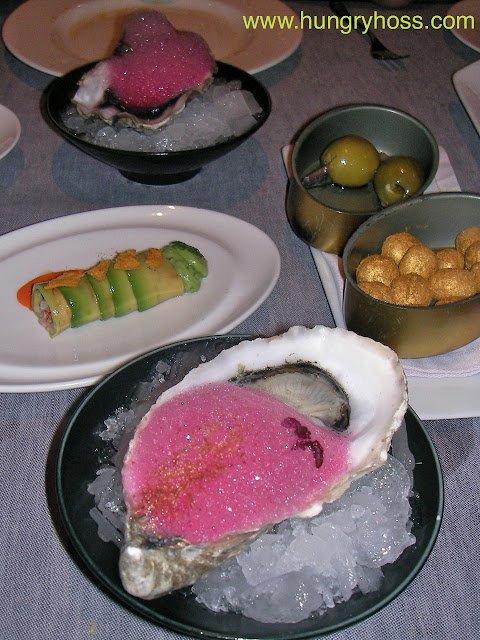 The restaurant itself is dark, stark and modern with an industrial edge softened by bold artworks and pops of primary colours that are often echoed in the strikingly beautiful food. At Comerç 24, dishes tend to arrive in synergised clusters. The first of such coalitions featured deliciously plump Gordal Olives with Anchovies; decadent ‘Golden’ Macadamia Nuts; an attractive Avocado Involtini (think inverted California roll or maki) with Wild Lobster and a perfect Oyster, topped with a Beetroot Foam, Chives, Pepper & Red Shiso. 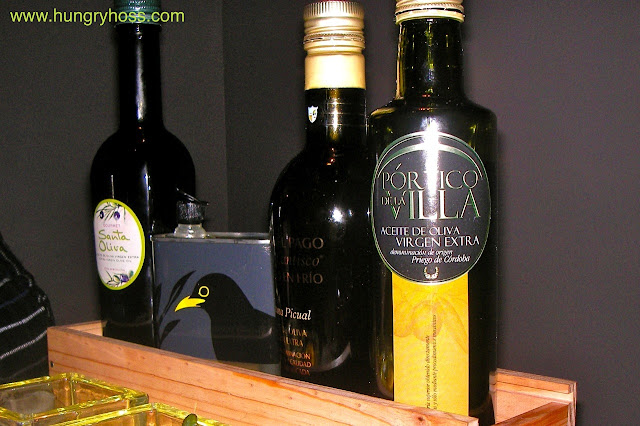 We were also presented with an Olive Oil tasting selection, featuring Merula, Santa Olivia and Pórtico de la Villa from Córdoba. I find the Pórtico de la Villa, intensely fruity with a subtle bitterness and peppery kick – it was my favourite of the evening and it is yet to be bettered. So far, I have been unable to source a supplier in the UK, but fortunately by parents bring me a 2 litre tin every time they travel over from their home in Spain; which I then have to ration myself with for it to last between visits. 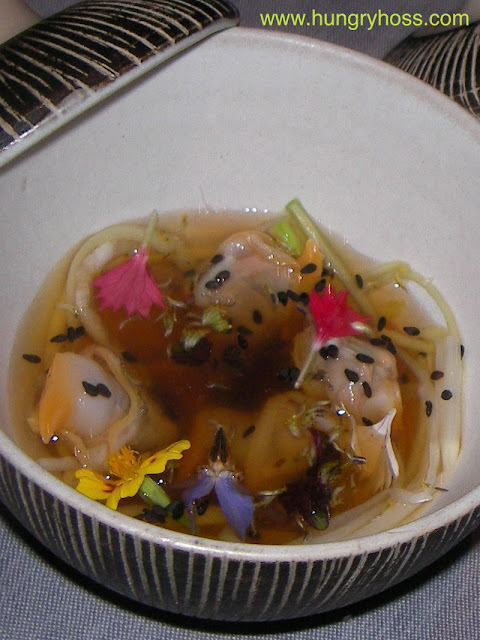 Next up came a beautifully light and Summery Dashi Broth with Sea Urchin & Cockles - the delicate flowers adding a hint of pepper and a flourish of floral elegance. 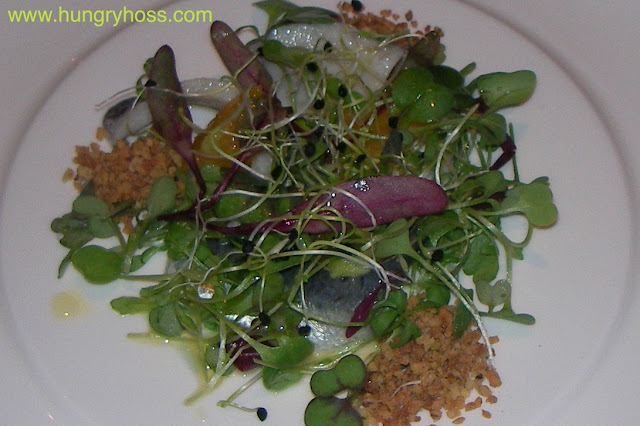 Alongside, we were served a Sardine Salad with Oranges & Wasabi – the marinated sardines were heavenly, stuffed with fresh wasabi root; the oranges provided a citrusy sweetness and the toasted breadcrumbs and pistachios gave the dish texture. 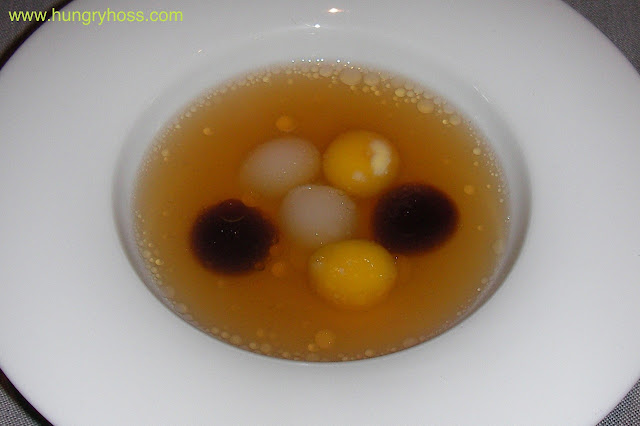 Following this, a trio of spherifications: Truffle, Parmesan & Quail Yolks - wonderfully swathed in a warm scented, Black Truffle Consommé. The dish may not look particularly inspiring but it was technically exceptional and tasted exquisite. 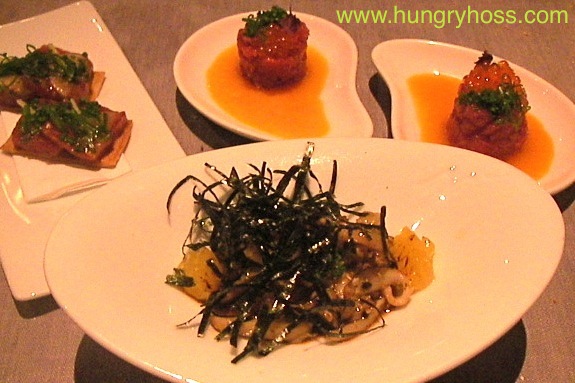 The next alliance of dishes to arrive featured a Razor Clam & Mandarin Yakisoba and Tuna Tartare with Roe & Egg Yolk Vinaigrette. Mirroring the colours of the Catalonian flag, the vibrant egg yolk vinaigrette, contrasted dramatically with the red flesh of the precisely diced tuna – the flavours in perfect synergy. The final component in this trinity was a dinky Tuna Pizza – a crisp pizza base, topped with slices of sashimi tuna, shards of spring onion, radish and a zesty lemon dressing. 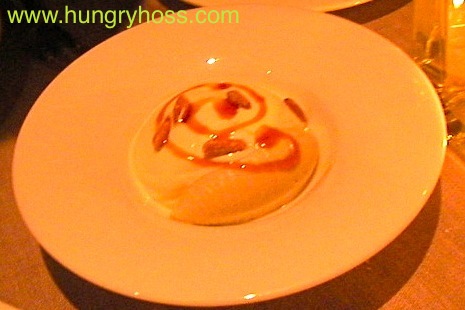 The next parade of dishes began with the first of a couple of savoury ice creams. The first being and Artichoke Ice Cream with a Salt Cod Foam topped with Caramel & Peanuts – an unusual flavour, texture and temperature combination but one which I thoroughly enjoyed. 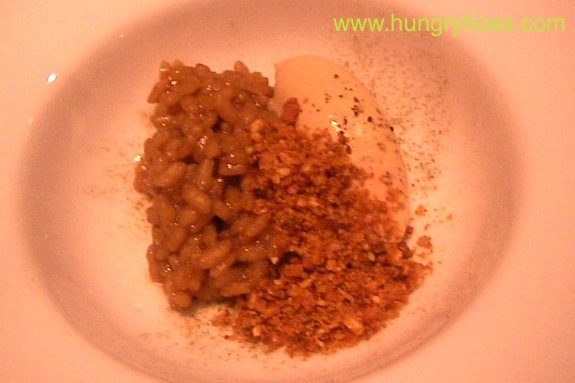 The second of the savoury ice cream was made with Foie Gras which accompanied an umami rich Duck Risotto with Toasted Cornmeal – my wife’s favourite dish from the meal. 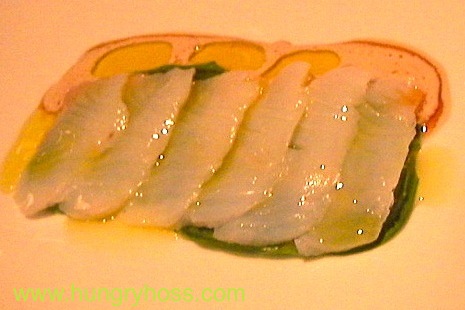 Also in this section was the Cod with Peanut Sauce, Spinach & Olive Oil. 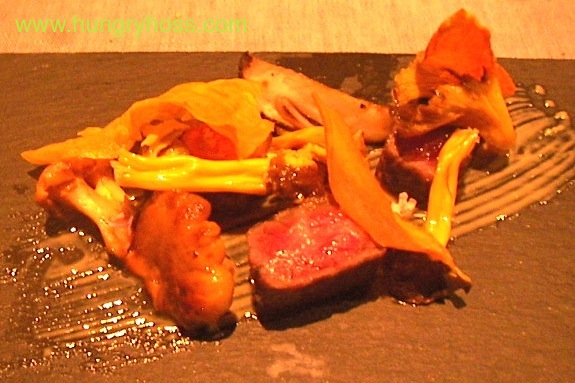 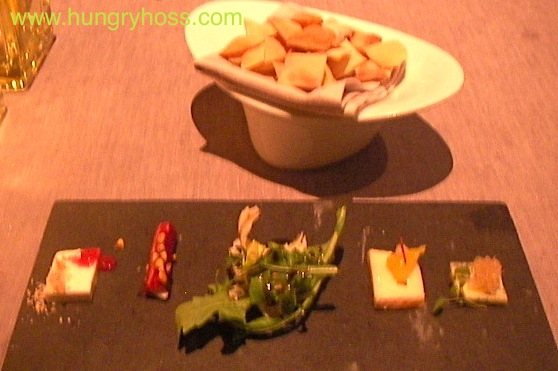 Next up came a Selection of Spanish Cheeses - each was paired with its own condiments and a cuddle of cute cracker style pillows. 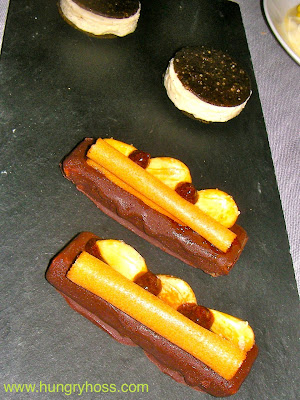 Whereas most of the previous courses had arrived in threes, the dessert came as a group of six! I remember thinking, ‘I don’t know where to start!’ That thought didn’t last long, as I took a bite of the ‘Oreo Cookies’ – black sesame ‘biscuits’ with a silky smooth vanilla crème filling. Sharing the slate, a chocolate coated Nougat Ice Cream, topped with a Tuile Cigar, Spanish Almonds with a hint of Coffee. 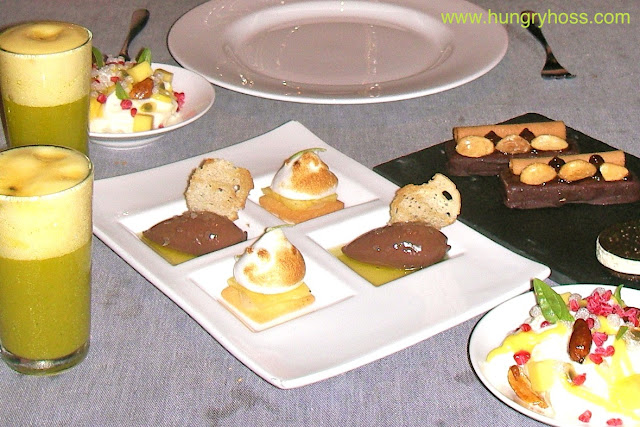 Alongside these were, a crumbly Sablé with Pineapple & Meringue and the intriguing dessert combination of Bread, Oil, Chocolate & Salt – a quenelle of intensely chocolaty and creamy ‘mousse’; drizzled in olive oil; topped with a wafer thin toast and a pinch on Maldon salt. It may sound wrong but I found it delicious! 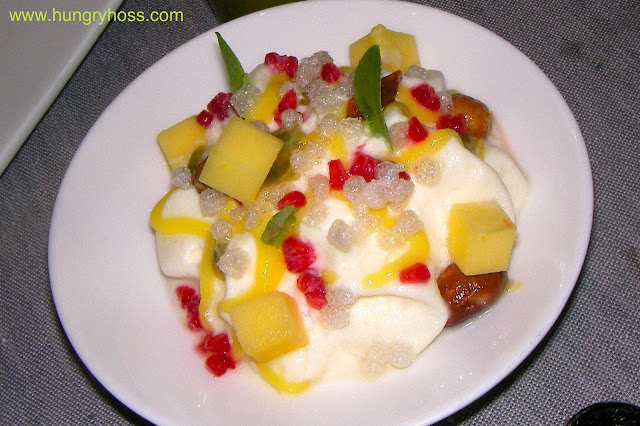 My favourite of the desserts however, was the final pairing, the lip-smacking Shot of Mandarin, Passion Fruit & Mint and the Muesli which included Yoghurt Espuma, Mango, Tapioca Pearls, Passion Fruit Seeds, Raspberry, Nut Praline & Basil Leaves. 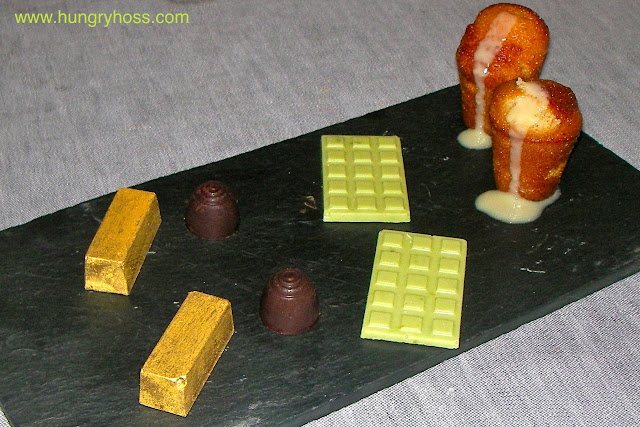 To complement the many Eastern influences throughout the meal, I deemed it appropriate to end with a Japanese Sencha Green Tea; served with some delightful petit fours - the mini Matcha Chocolate Bars and the ingots of Golden Chocolate were a fitting end to an indulgent, imaginative and inspired meal.

A deserving 5th place in my Hungry Hoss Top Ten!