Continuing the ‘run down’ of my Hungry Hoss Top Ten favourite restaurants of all time - at number eight, another New York offering, the three star Jean Georges. 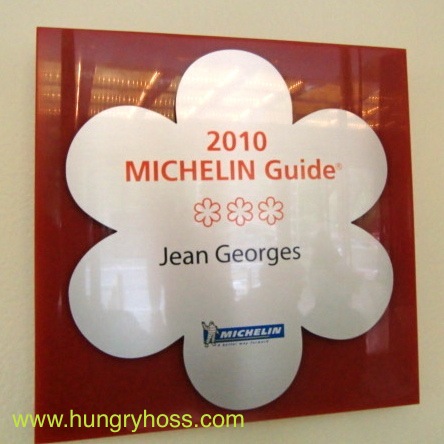 On my last visit to the big apple, I wanted to try at least one of the city’s five* 3 Michelin starred restaurants. (*Now seven, with Eleven Madison Park and Chef’s Table at Brooklyn Fare gaining them in the recently 2012 guide.) Masa was dismissed as I already had a booking at Kajitsu (see here) and as much as I love Japanese food, wanted some variety on my trip; Eric Ripert’s classic La Bernadin was a serious contender; I’d heard wonderful things about the service at Thomas Keller’s Per Se and Daniel Boulud’s eponymous Daniel is legendary and has trained so many top chefs. 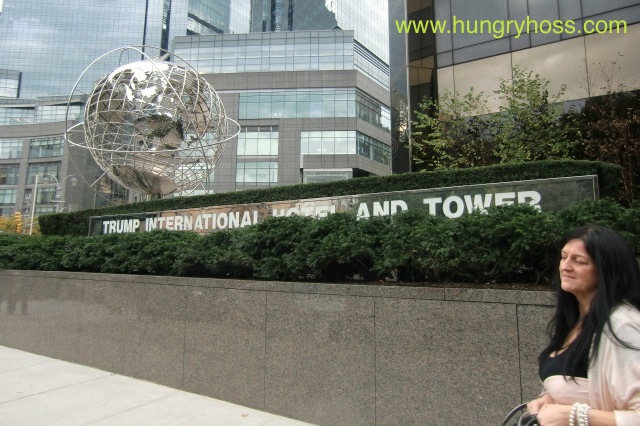 However, it was the Asian tinged contemporary French cuisine of Jean-Georges Vongerichten that eventually won the day. Adding weight to this decision was the restaurant’s prestigious location in the Trump International Hotel and Tower at One Central Park West on Columbus Circle. 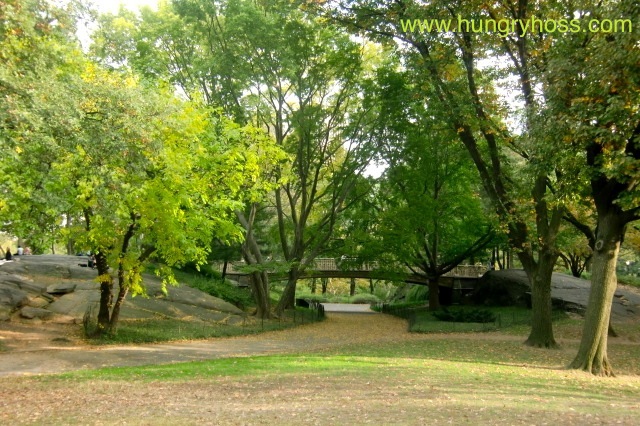 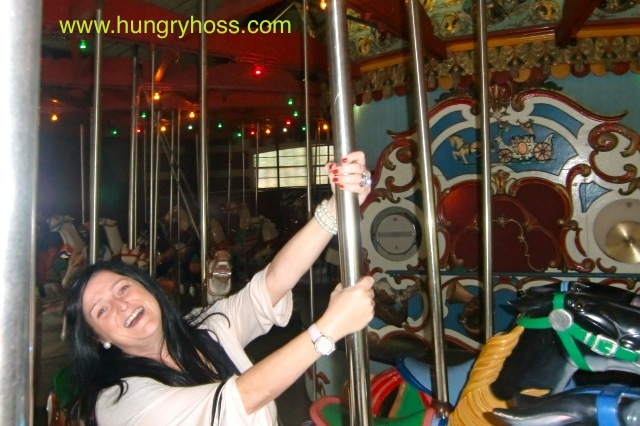 On the introduction to my top  ten (the Pied à Terre post) I  stated that when coming up with this list, I considered, ‘the quality of food, service, décor, ambience, location’ and ‘‘x factor’ or ‘je ne sais quoi’ – I’d like to add ‘timing’ to this list. For, what also made Jean Georges so memorable was the role that Central Park played as the perfect ‘digestif’ - after our meal, the time that my wife and I spent in the glorious autumnal sunshine, strolling hand in hand through the park, as the words and sentiments of Frank Sinatra’s ‘Autumn in New York’ rung through our hearts, rounded off the lunch perfectly and helped to make the meal all the more magical. Rounding off, the rounding off was a ride of the fabulous merry-go-round and a skate round the Wollman Rink. 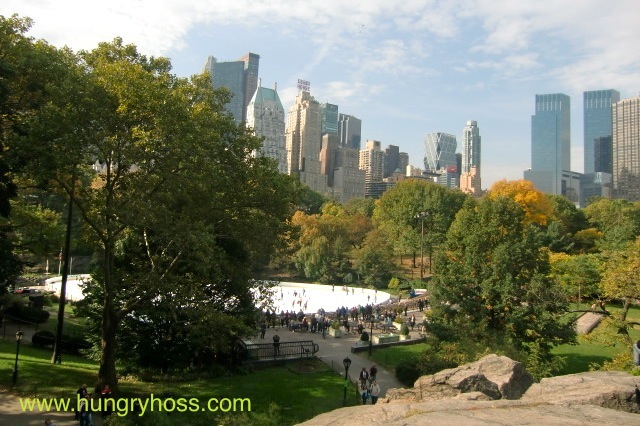 All this, I suppose, does beg the question, would the whole experience be as memorable if it had been raining and we had hailed a yellow can back to our hotel? Maybe not, but like I say, that was just the digestif; we still have the fabulous meal to recount. 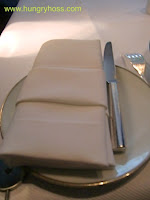 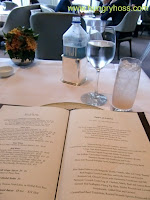 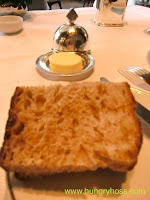 At the time of dining, the ‘Tastes of Autumn’ lunch menu offered twenty-one dishes with the set price of $32 for two and additional dishes for $16 each. My wife and I decided to select three dishes each. Please, forgive my relative lack of comments on the following, this meal was in October 2010 and I was not writing this blog at the time and although I took a few pictures for posterity, no notes were made. Consequently, I do not want to attempt to write too much from memory as I feel I would not do the food justice – suffice to say that my general recollection is that the cooking was absolutely flawless and the flavours harmonious. 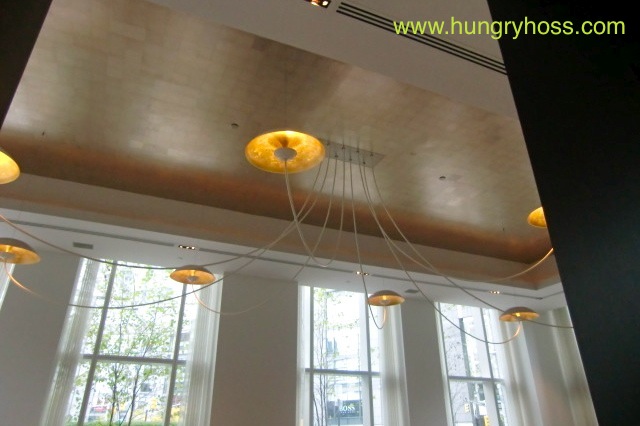 I went for:
Black Sea Bass Sashimi, Himrod Grapes and Lime Ponzu – a fabulous Asian inspired dish; my favourite dish of the lunch. 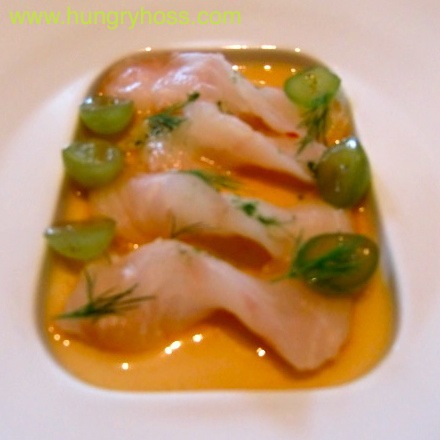 Crispy Crab, Pink Peppercorn, Mustard and Exotic Fruits – a great combination of textures and flavours: with the crisp kromeski of sweet crabmeat; the juicy, soft exotic fruits and the ‘pepperiness’ of the mustard cress. 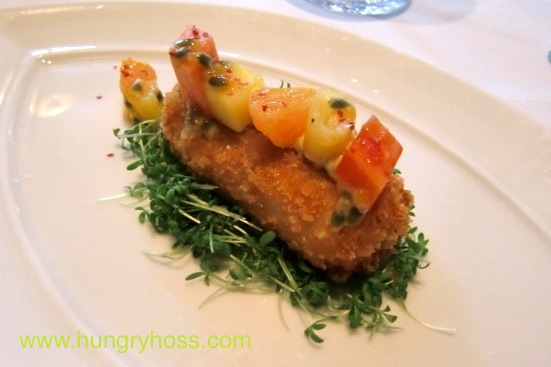 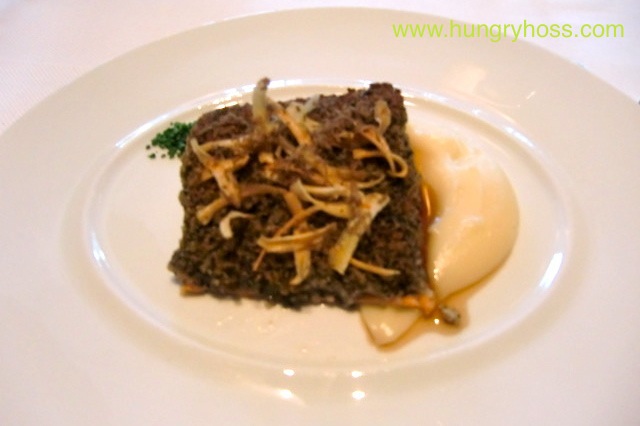 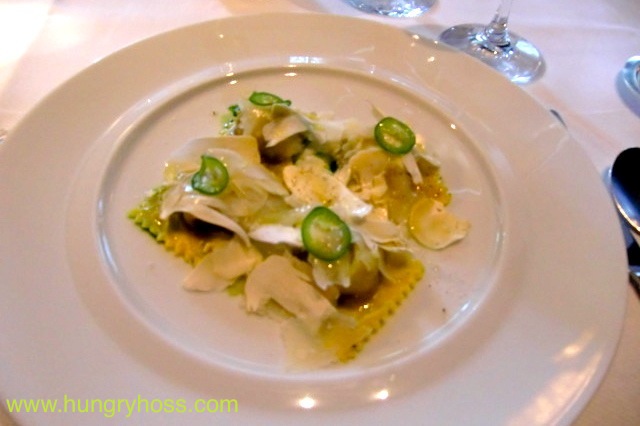 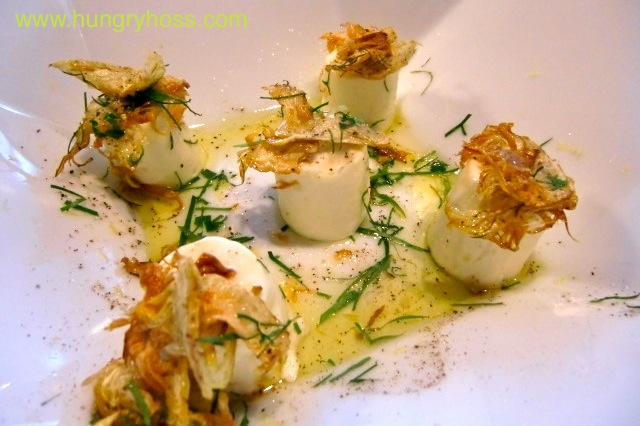 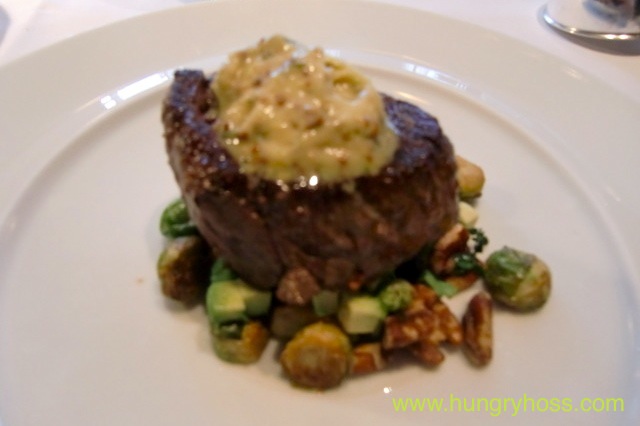 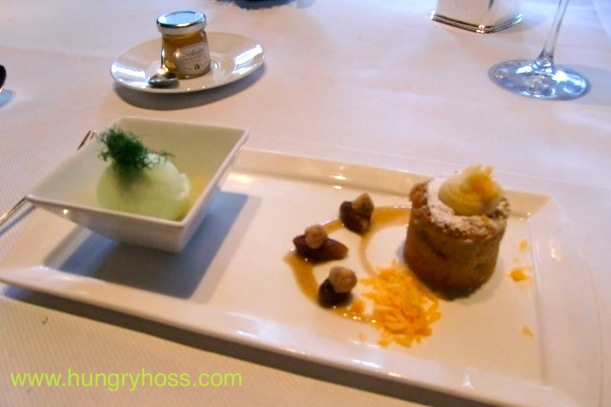 The spiced apple cake with the cider sorbet piped into its centre was beautiful; this was surrounded by dates topped with cinnamon encrusted hazelnuts and tiny Clementine juice vesicles that had been separated by liquid nitrogen. The Granny Smith apple sorbet and fennel with Chartreuse and a hint of aniseed then accompanied this, along with the crispy fennel fronds on top - a fabulous finish to the meal. 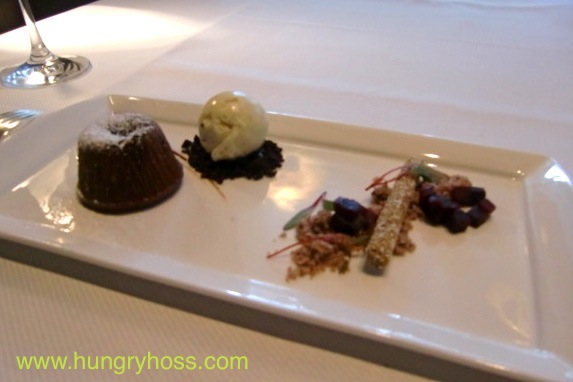 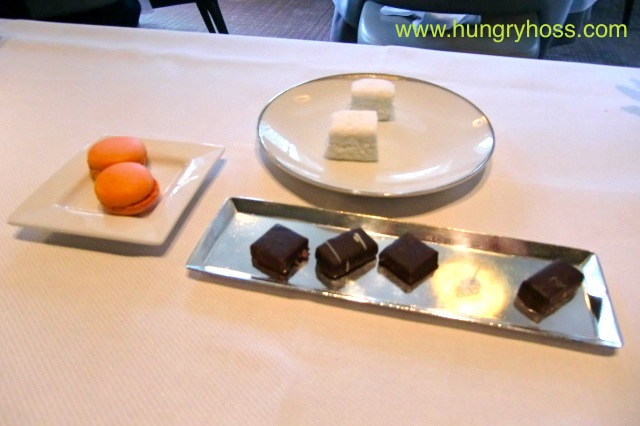 After the meal, before the park, we were presented with petit fours to accompany our tea - these included handmade chocolates, macaroons and the rather fun marshmallows, which were cut at the table. 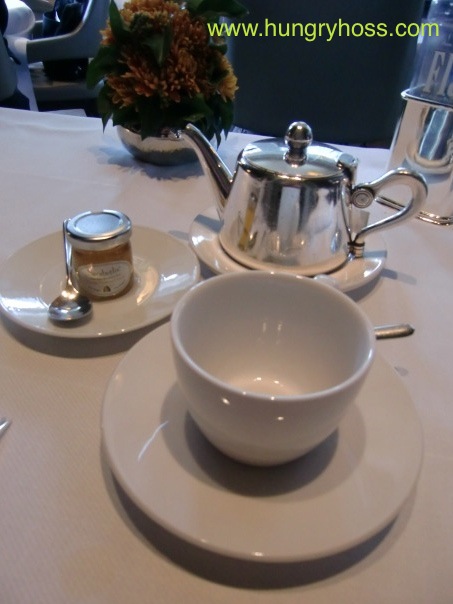 One negative to our meal was the green tea, which was served steaming hot and unfortunately had to be sent back and replaced. I don’t want to make sweeping generalisations about America’s inability to make a decent cup of tea; or indeed reinforce stereotypes about the British and our tea obsession, but a three star establishment, even if in a city famed for its coffee consumption, should know the correct temperature to prepare and serve the teas that they have on their menu.

For those that don’t, here’s the technical bit: the delicate flavour and aroma of tea is determined by natural sugars and amino acids present in the leaves; whereas, polyphenols or ‘tannins’ contribute to astringent and bitter notes. Amino acids dissolve at 60°C, while tannins dissolve at 80°C. Consequently, tea brewed at lower temperatures will enable the sweet complex flavours to shine and will not be overpowered by bitterness or astringency. I’d guess the tea at Jean Georges was served in the high nineties*, resulting in burnt leaves and overpowering bitterness. (*Whilst this temperature is suitable for oolong or black teas it’s far too hot for green, yellow or white) – I hope someone from the restaurant reads this, as they were just about perfect in every other area!

Simple solution, when in New York, go to Jean Georges – it’s wonderful (but order a coffee.)