Continuing the posts on my Hungry Hoss Top Ten restaurants of all time, a ‘vegan’ restaurant may not seem an obvious choice but Kajitsu, meaning ‘day of celebration’ is special for a couple of reasons. Firstly, I love all things Japanese: samurai warriors; ninjas; the literature of Murakami and poetry of Basho; kitschy J-Pop and Hello Kitty. Most of all, I love the food of Japan - and this small two Michelin starred restaurant in New York’s happening East Village specialises in ‘shojin cuisine’, artistically presented in the kaiseki style; the Japanese equivalent of haute cuisine. The second reason being, the brilliant sake menu and parings.

The Kajitsu website states: ‘Kajitsu serves shojin cuisine; an ancient Japanese cuisine developed in Zen Buddhist monasteries. Following the Buddhist principle of not taking life, Shojin cuisine does not use meat or fish. Meals are prepared from fresh, seasonal vegetables, legumes, wild herbs, seeds and grains, chosen at the moment in the season that best reflects their flavour. At Kajitsu they make their delicious and wholesome dishes from high quality ingredients prepared with traditional Japanese culinary techniques.’

A master of his craft, having trained for ten years in Kyoto’s Kitcho, Chef Masato Nishihara works alone, like a rōnin, at his counter of the open kitchen, skilfully creating technically flawless and beautiful food. Such is the power of the chef’s fantastically fresh, authentic cuisine, that with every mouthful, I could imagine being at the foot of Mount Fuji surrounded by sakura, as opposed to a basement restaurant in the bustling city that never sleeps. 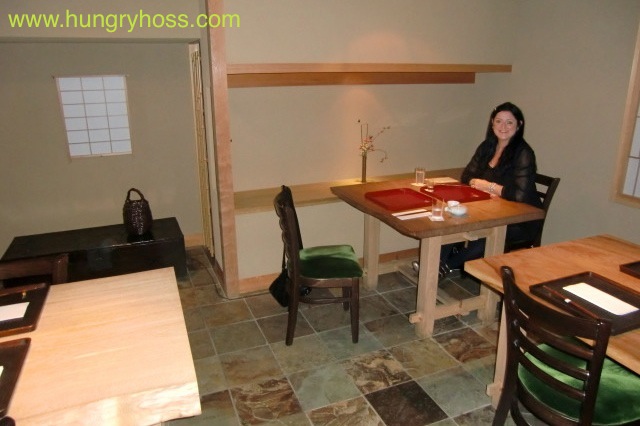 Despite it being late October, we had enjoyed particularly pleasing weather. Earlier in the day, we had taken another stroll through Central Park and had a sun kissed skate around the Wollman Ice Rink. In the evening however, the weather took a turn for the worse (so much so that our plan to go up the Empire State Building after our meal, had to be shelved). It also made haling a yellow taxi outside our hotel seemingly impossible. Wet and fearing that we would be late for our reservation, we were starting to get a little stressed - fortunately, the Waldorf Astoria has its own fleet of ‘limousines’, so even though we were a little bit worse for wear we eventually made our way to the restaurant in style.

I’m certain that Kajitsu could be described as Zen-like any time of the year, but stepping into this wonderfully tranquil restaurant from a cold, blustery and rainy New York street, made for an impactful contrast. Sparsely furnished with heavy wooden tables, stone floors and neutral hues, the restaurant’s décor is distinctively calming; this is enhanced by the subtlest splashes of colour from simply arranged flowers and artworks. I don’t remember any music – if there was it was unobtrusive. Simply put, I can’t remember a time when I have felt so relaxed. 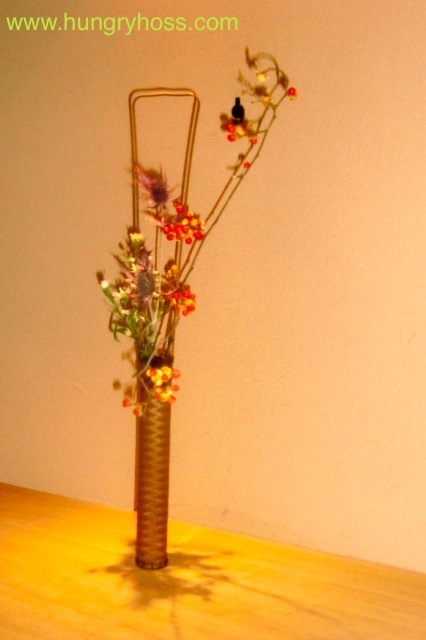 As much as I love the image of the Geisha, it was also reassuringly ‘authentic’ to be served by a casually dressed New Yorker in jeans, a t-shirt and apron. At Kajitsu, authenticity comes from the food and the food alone - not from putting their waiting staff in traditional Japanese dress. The staff were also very knowledgeable, telling us about key ingredients, such as Fu (a traditional type of wheat gluten) and, of course, the different sakes (or Nihonshu.) 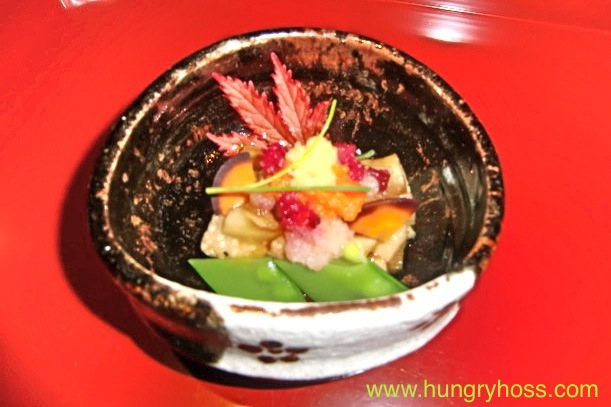 All dishes came served on bright red melamine trays, which made a vibrant contrast to the rustic Japanese glazed pottery that contained our first dish from the ‘Hana’ menu, Grilled Eggplant with Ponzu Gelée and a Hibiscus Leaf - blissfully delicate and beautifully delectable.

This dish was paired with Denshin Sake from Fukui – although I am not a regular drinker, I do enjoy sake. This one was very dry (my wife’s favourite from those we tasted.) 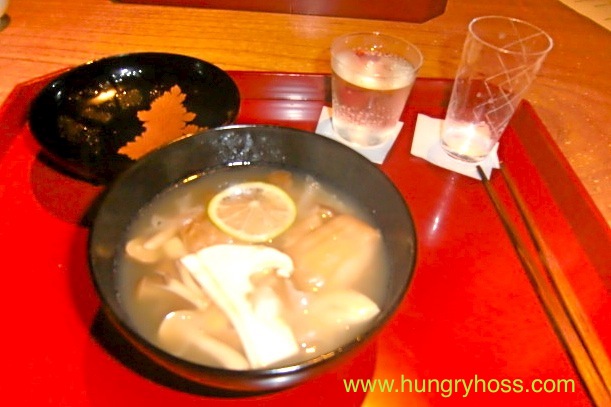 The next dish was an umami rich Autumn Mushroom Soup, showcasing some superb specimens. Some were familiar, such as Shimeji and Enoki; others were new to me, such as: Matsutake, Maitake and the White Wood Ear. The dish also featured Choji-Fu, Green Yuzu and Sudachi, which added a citrusy tang to the hearty and earthy broth.

This dish was paired with an Azumaichi Sake from Saga – as this meal was taken over a year ago, I can’t recall too much about this one and as I hadn’t started my blog at this time I don’t have any notes to refer to. 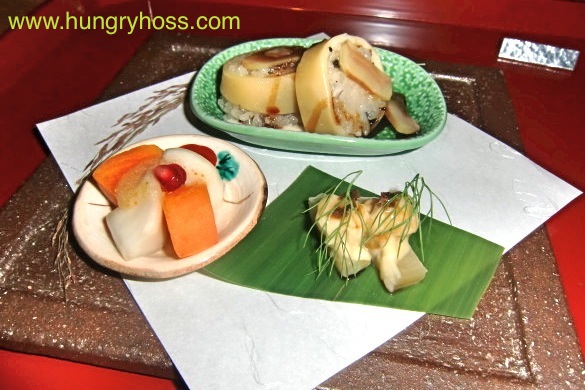 Next up came a trio of dishes, which complemented each other so well. My favourite was the Calamarata Pasta Stuffed with Multi Grain Rice and Chestnuts (The large rings of Calamarata pasta get their name from their resemblance to calamari rings; an unusual ingredient in Japanese cuisine).

Served along side this were Grilled Fennel Bulbs with Miso Marinated Sesame Tofu and Black Truffle – full on, traditional Japanese flavours and wonderful textures. (Sesame Tofu or 'goma dofu' is actually nut a tofu at all; it is made from kuzu, water and sesame paste.)

The final part of the triad was a Salad of Fresh Persimmons (Sharon Fruit) and Kabu Turnips – regally topped with jewels of pomegranate.

This dish was paired with Born Sake from Fukui – a much sweeter offering. 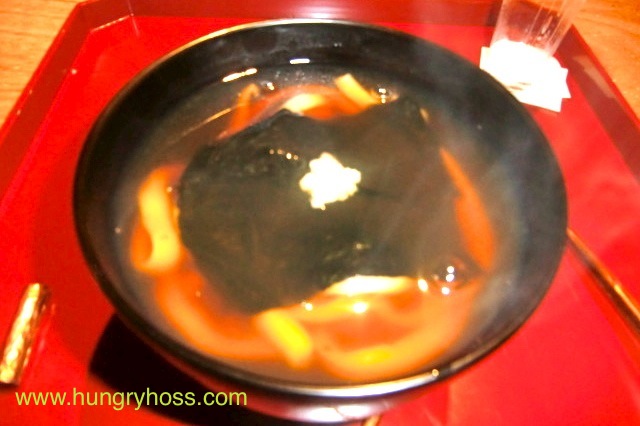 The next course was undoubtedly my favourite, House-Made Udon with Kuzu Broth, Yuba (more commonly known in the UK as beancurd skin, sheet or paper and sometimes as tofu skin) and Nori – extracted from the root of a vigorous Japanese mountain weed, the Kuzu starch works as delicious thickener which makes soups have the most wonderful silken texture. 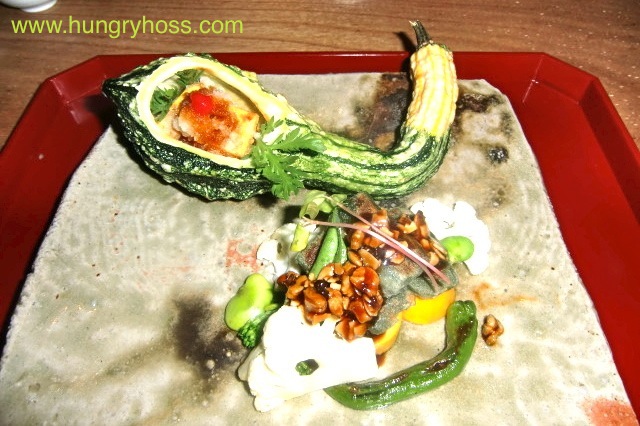 Served within the hollowed out gourds from different squashes, the next course was perhaps the most visually impressive, Grilled Yomogi Nama-Fu and Vegetables with Sansho Sauce and Nuts, Kabocha Squash Tempura with Daikon, Horseradish and Ume Plum Paste – the green Nama-Fu was the star of the show. 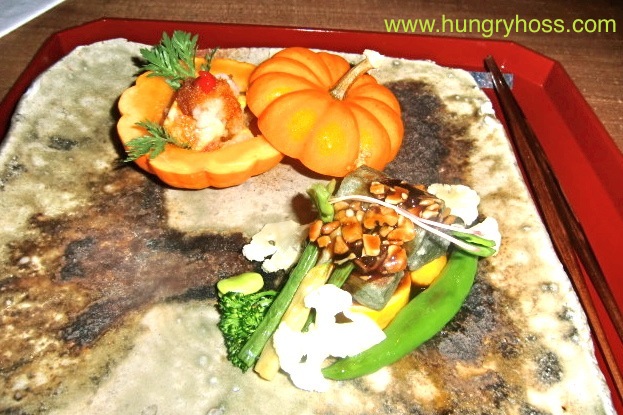 This dish was paired with Sasaichi Sake from Yamanashi – a particularly refreshing offering.

Following this came another trio of dishes. One being Gomoku Rice - some quick Internet research tells me, that ‘Gomoku is a rice based Japanese dish traditionally made with five vegetables and some type of protein. Everything in this one pot meal has strong healing properties that all come together to create a deeply nourishing meal.’ I can’t vouch for its healing properties but it sure tasted good! 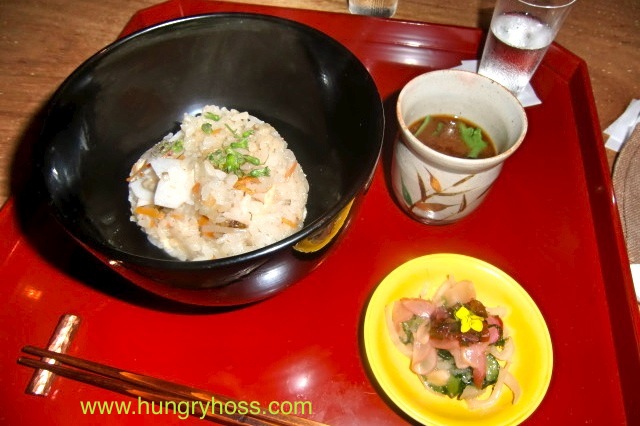 Accompanying the rice was a small serving of Red Miso Soup. Of all the dishes on the menu this was the one that I was most familiar with  - it was the best miso I have ever tasted.

Complementing these dishes were some delicious House-Made Pickles, topped with delicate flowers. 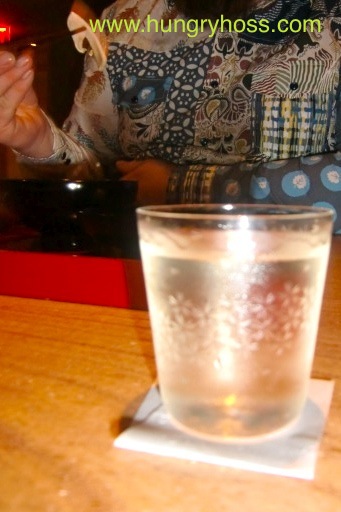 This dish was paired with a Daishichi Sake with Fukushima – this was the smoothest of the sakes we tasted and my personal favourite on the evening. 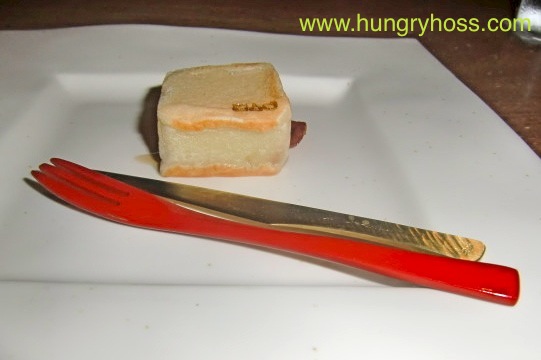 The first of the desserts was a Sweet Potato Pastry Square – although I would perhaps have preferred a nice chocolaty rich cake, it’s good to eat different things - but it’s fair to say, Japanese desserts are not my favourite sweet treats. 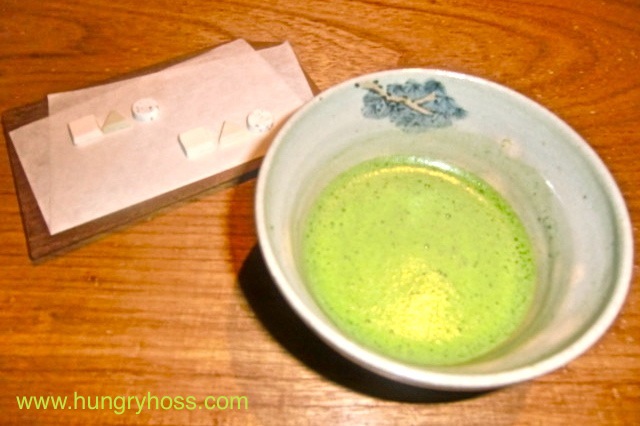 An enchanting eating experience - for providing us with exquisitely prepared Shojin cuisine in perfectly peaceful surroundings, Kajitsu is the restaurant, currently at number 9 in my all time Hungry Hoss Top Ten.