Ferran Adrià said, "Food is the new Rock 'n' Roll.” – I particularly love this quote because food and music are two of my life’s big loves.

Just as Elvis’ fans flock to Graceland; Bob Marley’s to 56 Hope Road and the Beatles’ to the Cavern Club - fans of ‘The first Rock ‘N’ Roll Chef, Marco Pierre White’ should visit his ‘spiritual home’ - The Box Tree in Ilkley.

Sure, there are one star (and no star) restaurants in the country that produce more exciting and progressive food but there are few that have the immense pedigree, quaint rural location and sheer class of The Box Tree. 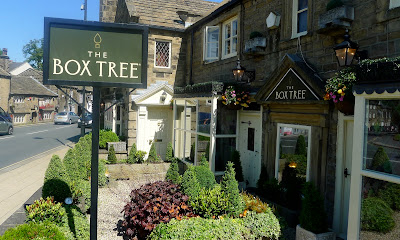 The original stone farmhouse, which dates back to 1720, has a rich and varied history – as a home, an antique shop and a tearoom. The eponymous box trees were first planted in the late nineteenth century. It was in 1962, that Malcolm Reid and Colin Long opened ‘The Box Tree Restaurant’ and set about making it one of the most well known and talked about fine dining establishments in the country at the time. A charming handwritten menu circa. 1963 is still on display in the bar area, featuring dishes, such as ‘Prawn Cocktail’, ‘Quiche Lorraine of Smoked Salmon’ and ‘Supreme of Chicken Chasseur’ - dishes which at the time, would have certainly been the culinary dernier cri. 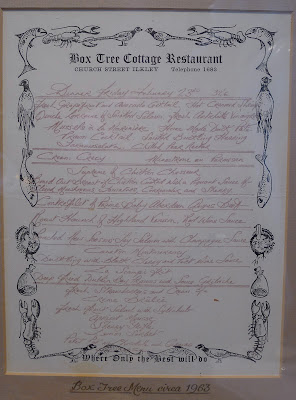 In 1977 Chef Michael Lawson, driven and challenged by the owners, cooked the flavoursome French flair that culminated in The Box Tree (along with The Connaught, The Waterside and Le Gavroche) becoming one of the first restaurants in the UK to be awarded two Michelin stars. It was around this time that a teenage Marco Pierre White got his first taste of working in a Michelin kitchen.

The prodigious young chef soon moved on to the bright lights of London, trained further, opened his own place and went on to cook up a storm and change the way we think about food and chefs forever. In the meantime, the Box Tree faltered and lost its stars whilst Marco set about collecting them like children collect football cards. As we all know, Macro soon gave his collection away and instead, set about collecting restaurants. 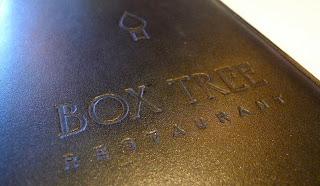 In 2004, Chef Simon Gueller and his wife Rena made their way to the moors of Ilkley and rediscovered the lost sheep that The Box Tree had become; and brought it back from the dead - regaining a star the following year. The Guellers have successfully retained the star for the last seven years and in 2010, Marco, like a prodigal son, returned to form a partnership with them to help shepherd the restaurant into its next chapter. 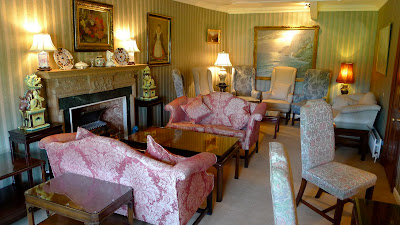 There have been many changes since its opening almost fifty years ago, but the Guellers have managed to retain and revitalise the soul of the restaurant’s heritage and classic grandeur, once cultivated by Reid and Long - the individual and unique artworks and ornaments that tastefully adorn this historic building, many of which have seen different chefs and owners come and go, each have a narrative of their own and speak of their part in the story of The Box Tree so far. The rich glow of the polished wooden antique furniture and sumptuous upholstery whisper splendour and stateliness. 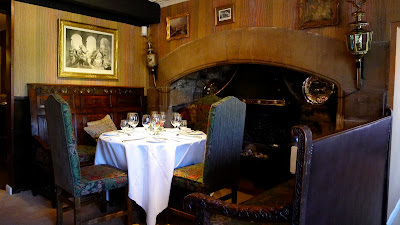 The most important thing that the Guellers have revived form The Box Tree’s heyday, is the philosophy of serving high quality, largely locally sourced ingredients that are full of uncompromised flavour. Our recent Sunday lunch menu boasted sophisticated unpretentious food, prepared with skill and elegant presentation. 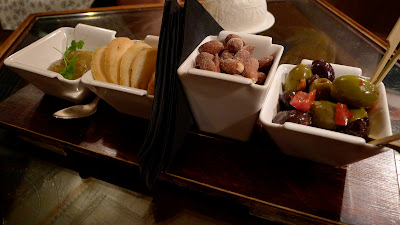 On arrival we sat in the plush lounge on the ground floor close to the bar and enjoyed a sherry and amuse bouche of Curried aubergine, Crostini, Smoked almonds and Olives – all of great quality and very tasty. 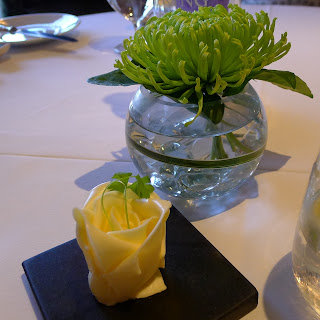 A delightful butter rose awaited us in the dining room. It always seems a shame to destroy these delicate offerings, until the wonderful fresh Tomato and Rosemary and Plain Wholemeal Bread arrive. 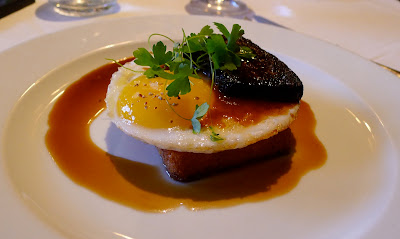 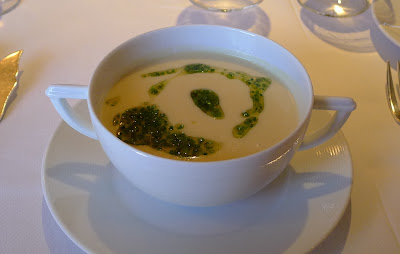 My brother-in-law had the Cauliflower veloute and chive oil – after looking at the sample menu on the website (www.theboxtree.co.uk). He had been hoping this was on the menu; he was not disappointed. 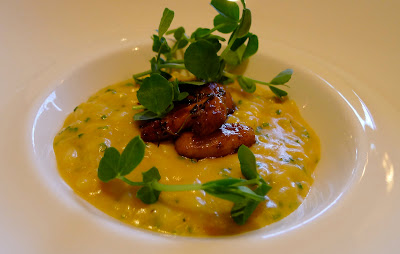 My wife and sister-in-law both opted for the Butternut squash risotto with roasted ceps – a lovely creamy texture and vibrant colour. There were murmurs of over seasoning… but the plates were wiped clean! 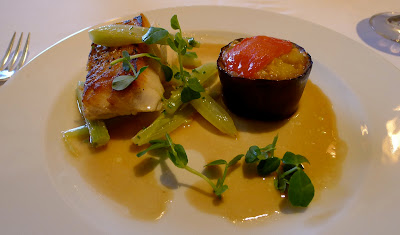 My Roast loin of Whitby cod, tian of aubergine with chicken jus – was chosen on the strength of the aubergine tian. The celery was a pleasant surprise ingredient and the chicken jus had great depth. 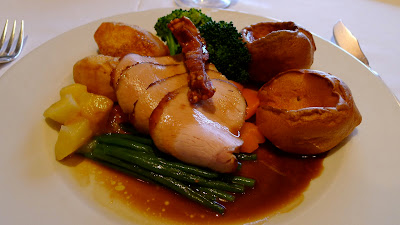 My wife chose the classic Roast pork, Sunday garnish, apple sauce with Madeira sauce – what could be better than a Yorkshire Pudding, cooked by a Yorkshireman, in one of Yorkshire’s finest ever (albeit predominantly French) restaurants? 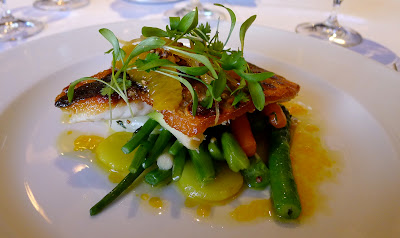 The stand out dish in our collective opinions was my brother-in-law and his wife’s Fillet of sea bass, essence of orange with fresh coriander – I only managed to sneak a coupe of forkfuls from them but: the fish was perfect, with a delightfully crisp skin; the coriander seeds also added a welcome crunch and worked well with the citrus ‘essence’ which made the dish wonderfully light and summery. (Karen didn’t even get a bone in her fish – and Karen always gets a bone.) 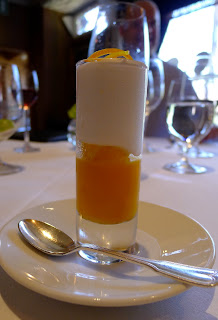 ‘Pre-dessert’ was a Mango jelly, orange segments with a cream cheese foam – all four of us loved it! 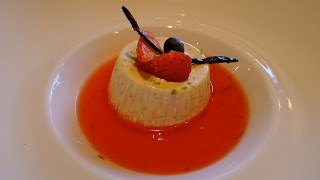 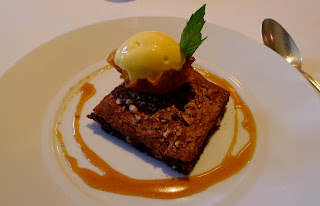 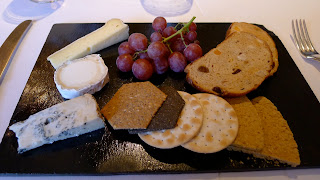 A selection of fine cheese – featured a Tomme de Savoie a mild cow’s milk cheese with musty and earthy notes; a Golden Cross Goat’s cheese with a soft caramel undertone and a “Roquefort style” Lanark Blue, a creamy ewe’s milk cheese, sweet with a little sharpness. 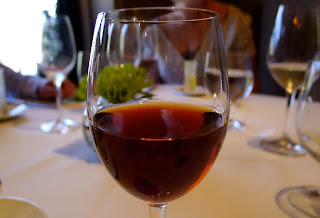 We took advantage of some of the restaurant’s fine port collection, trying 1997 and ‘68 Khron Colheitas and a 1975 Quinta de Noval. It was my birthday week and I was born in ’75 – I so wanted the Noval to be the best year, but the ’68 won our little taste test, much to my much older brother-in-law’s delight. 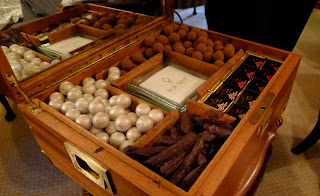 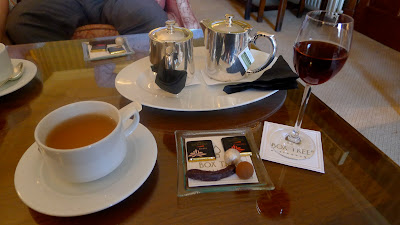 After the meal we had coffee, teas and chocolates, first in the bar area and then in one of the upstairs lounges.

The best part of the meal was knowing that next month I will be visiting The Box Tree again, donning some chef's whites and stepping into the legendary kitchen as part of the birthday gift arranged by my wife – I can’t wait!