For foodies throughout Britain, Northcote Manor needs no introduction - but for those that are interested in such details: In the mid eighties, Chef Nigel Haworth and General Manager Craig Bancroft took up posts at the ambitious hotel and restaurant. By 1986 their combined efforts led to Michelin awarding Northcote its first star. In 1989 the pair became joint owners and have worked hard to consistently place the Manor as one of the best places to stay and dine in the country; retaining its star throughout. 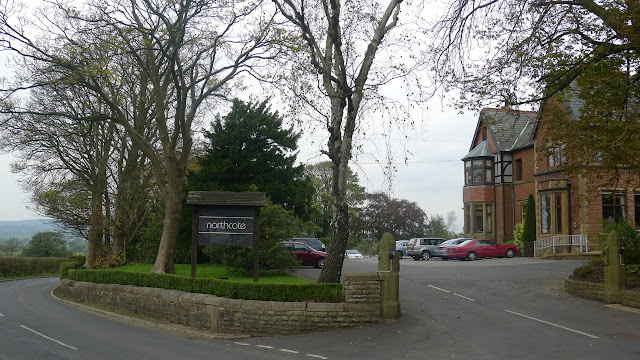 In 2000, young local lass Lisa Allen joined the kitchen, expecting to stay for one or two years, gaining experience before moving on. However in 2003, impressing Nigel and having been taken under his wing Lisa was made Head Chef - this along with her successful appearances on Great British Menu make her one of the most recognisable, respected and celebrated female chefs on the country.

“I read the news today oh boy
Four thousand holes in Blackburn, Lancashire
And though the holes were rather small
They had to count them all
Now they know how many holes it takes to fill the Albert Hall.”

Typically idiosyncratic Lennon and McCartney lyrics from the Beatles’ A Day in the Life - supposedly penned after reading a newspaper article about the state of Blackburn’s roads. On the day in our lives that my wife, my parents and I chose to visit, the roads were fine. We enjoyed our journey up from Cheshire to the beautiful Lancashire countryside. The only holes being the big ones in our bellies, eagerly waiting to be filled by Northcote’s Michelin starred cuisine. 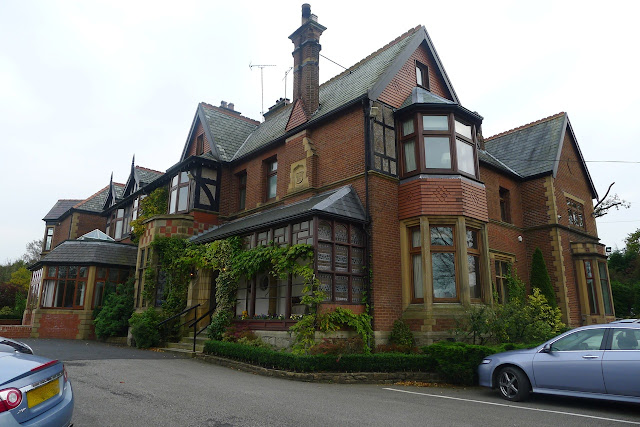 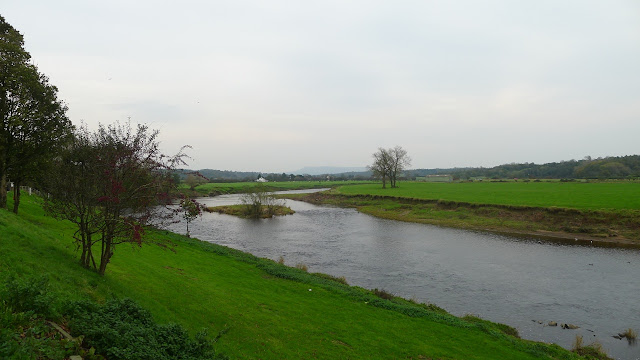 The Victorian manor house boasts fantastic views of the Lancashire countryside, overlooking the River Ribble. As the hills roll away, sheep and cattle gently graze on the lush greenery. No wonder Nigel’s locally sourced ingredients taste so good with such luscious surroundings for them to thrive. 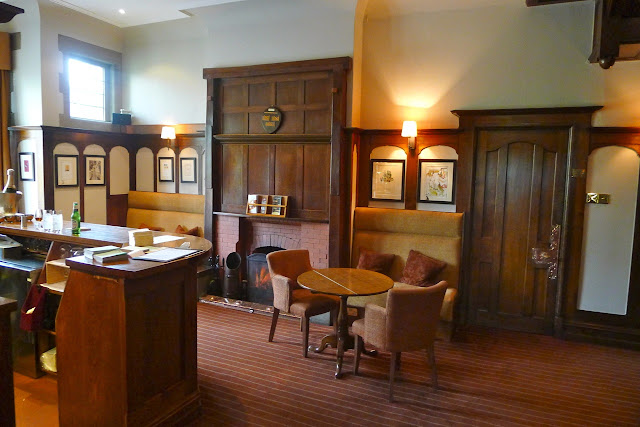 Once inside, stresses roll away as one is welcomed into the grandiose bar and lounge area. The quintessential Britishness of places such as Northcote Manor (Holbeck Ghyll and the Box Tree in Ilkley, among the others) is as heartwarming as the open fire that cheers visitors on the colder days in the hills.

The oak paneling and antique decorations are impressive enough, but what really impresses a foodie like myself is the remarkable collection of framed menus from some incredible restaurants; including Marco Pierre White’s Harvey’s and The Canteen; Pierre Koffmann’s three-starred La Tante Claire; The Box Tree from it’s two star heyday and some place called La Pyramide. 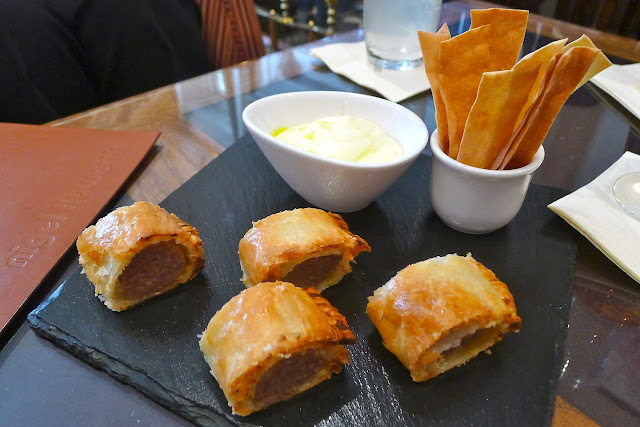 As we enjoyed our aperitif, an amuse bouche featuring a Caramalised Onion Mousse with Flatbreads and my dad’s favourite, Sausage Rolls soon arrived. It’s wonderful to see something as simple (albeit perfect) sausage roll served up in a Michelin eatery and it reminds diners of Nigel’s no nonsense approach to good quality, hearty food. 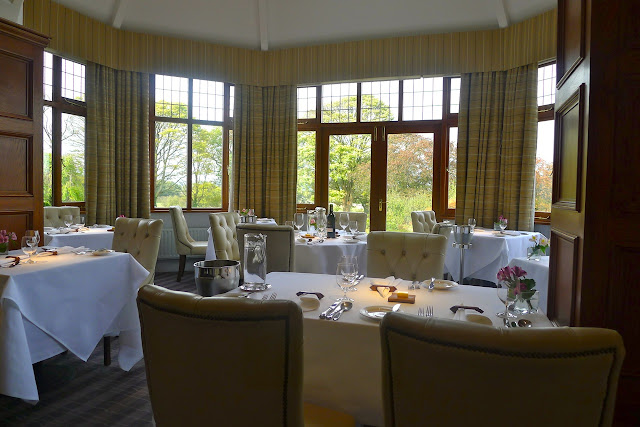 Taking our seats in the main dining room, we eagerly awaited the set starter, a Parsnip Soup with Curry Foam. Although the main dining room features more modern décor than the reception rooms, the neutral colours and beautifully set tables still maintains its classic splendor. The plush leather seats were terrifically comfortable. 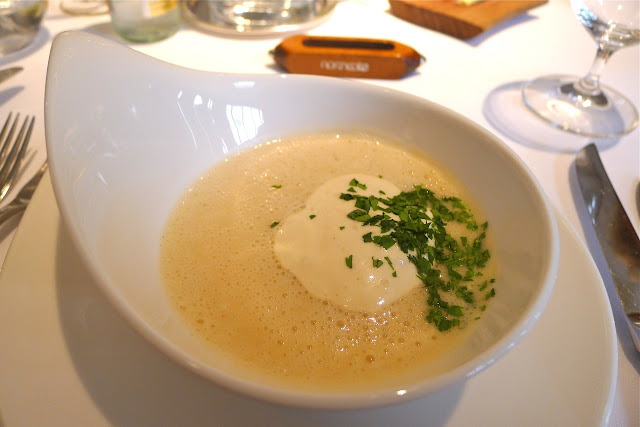 The soup was very good; the accompanying Lancashire Cheese bread was outstanding. 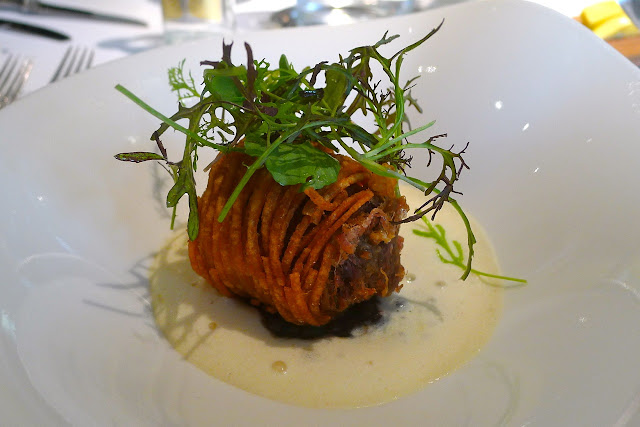 My father and I both chose the Potato Wrapped Cockerham Goat, served with Lentils and a Smoked Bacon Foam. Chefs Nigel and Lisa are not usually associated with culinary foams but already we had had one on the amuse (the onion mousse), the starter (the curry) and now with the Smoked Bacon, each of them though added a interesting burst of flavour and were not just there for show or to be ‘trendy’. The goat itself was exceptional, so full of flavour and the crispy potato wrapping was perfect – very accomplished cookery. 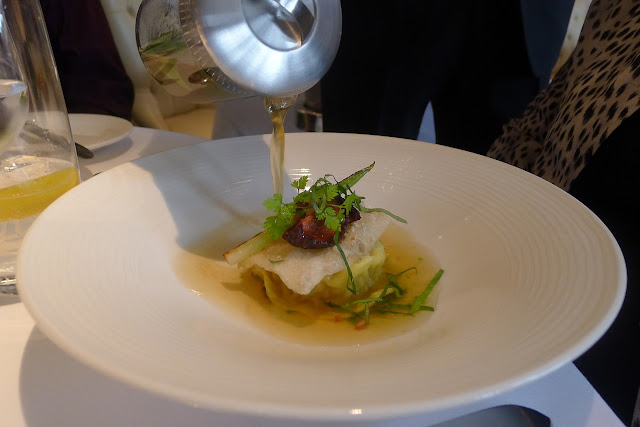 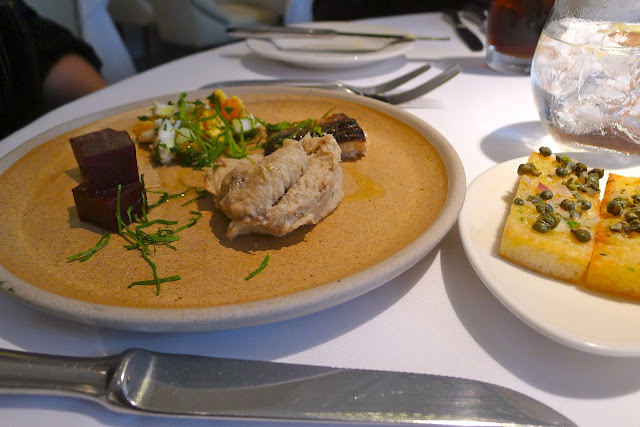 My wife opted for the Smoked Mackerel Pate with a Soft Hen’s Egg, Warm Toast and Sorrel. I managed to pinch one of the accompanying caper toasts – delightful! 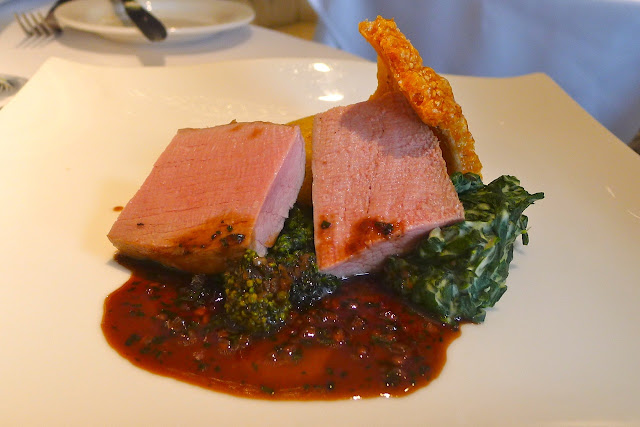 I am undecided whether the best pork I have ever tasted was at Le Gavroche (see here) or during a previous visit to Northcote, as a result of my recommendation, my mother and father both chose the Gloucester Old Spot Pork Fillet. Served with Celeriac and Spinach, Purple Sprouting Broccoli, Caramalised Onion and the Lancashire specialty a ‘Potato Dab’ (a battered potato fritter), they were not disappointed. The crackling was top notch! 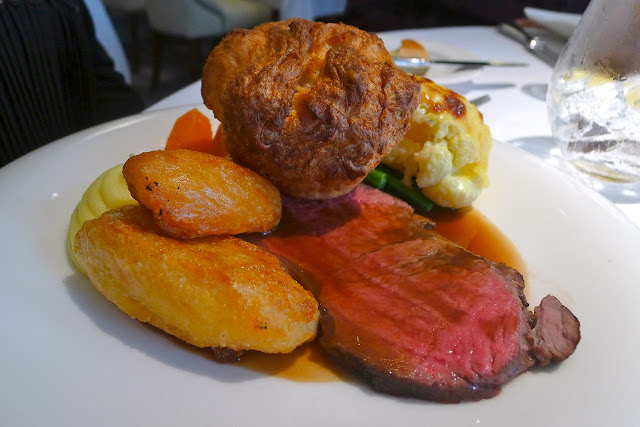 It was a Sunday, so my wife opted for the traditional roast of Roast Sirloin of Dexter Beef with Yorkshire Pudding, Roast and Purée Potatoes, Seasonal Vegetables and Roast Gravy. My wife kindly gave me one of her amazing roast potatoes and some of her beef – it was sublime! 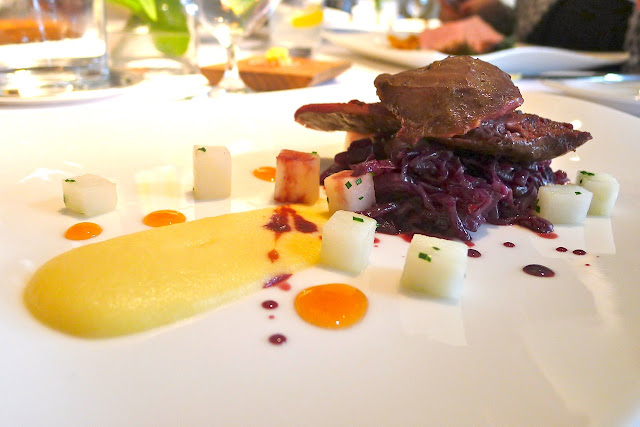 I opted for the Goosnargh Wild Duck with Spicy Red Cabbage, Turnip and Mead. A beautiful dish: the cubes of turnip tasted great and added good texture; the sticky honeyed mead added a sweetness that complemented the rich duck. 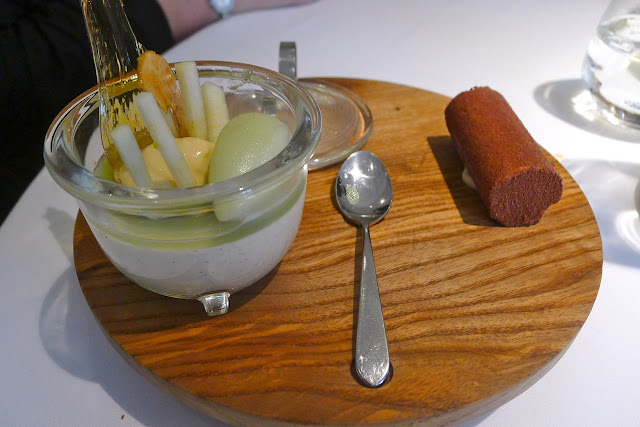 The four of us each chose a different one of the four available desserts. My wife choosing best with the Bramley Apple Trifle with Sorbet and Crisps - a great combination of flavours and textures, presented with flair. 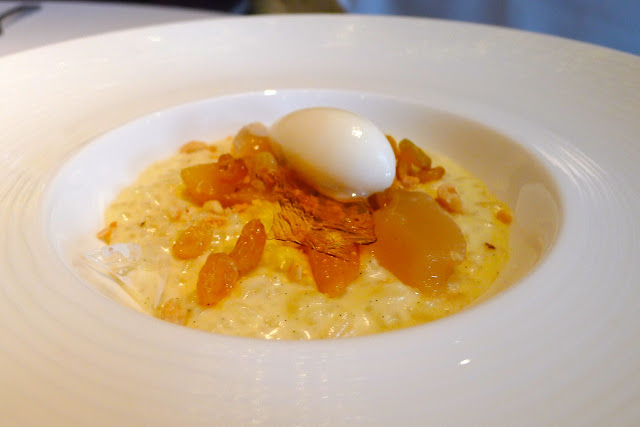 My mother said she was a little disappointed with her dessert of Roasted Pear Rice Pudding with Sorbet, Yellow Raisin and Toasted Nuts. I didn’t taste it so I wouldn’t like to comment – all I can say is that she soon tucked it away so it can’t have been that bad! (I think she was just a little jealous when she saw mine!) 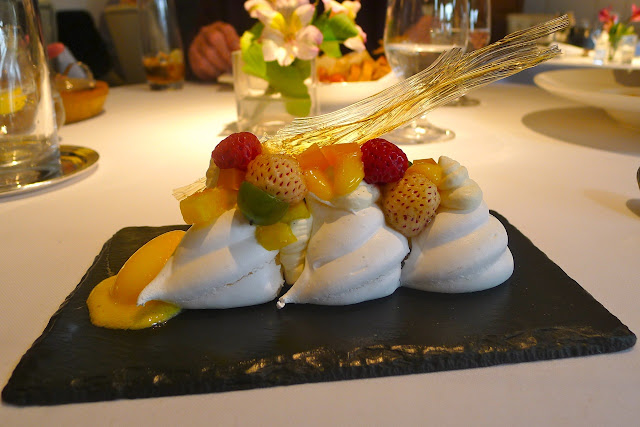 My choice certainly looked the part, a Tropical Fruit Pavlova with Jelly and Double Ice Cream. I’m sorry to say that for me it reminded me of the old adage ‘all fur coat and no knickers’ for it lacked a little in flavour. The sorbet had a reasonable ‘tropicalness’ but I felt it could have done with a coulis or similar for a greater impact; perhaps some passion fruit – but what do I know? 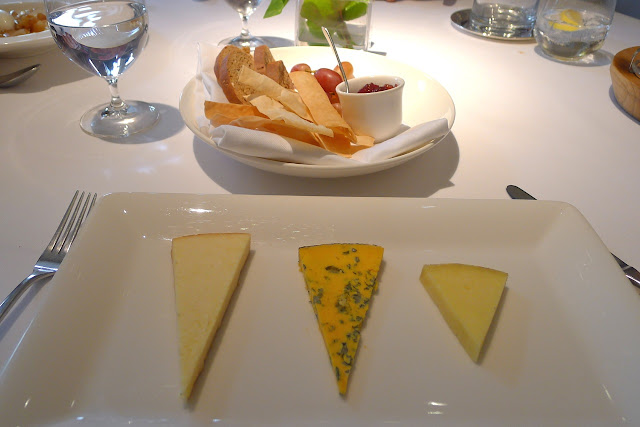 My father went for the Selection of Lancashire and Blue Cheeses – featuring a Mrs. Kirkham's Lancashire, a Smoked cheese and a Blacksticks Blue (named Best Blue Cheese in the World at the Nantwich International Cheese Awards – see here). The cheeses were well presented with delicious home made chutneys, breads, crackers and grapes. 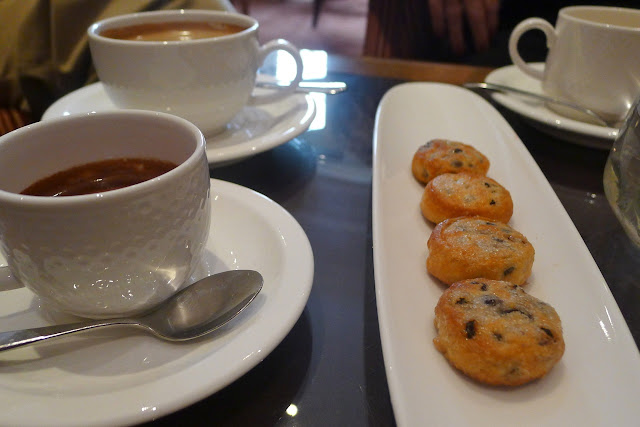 We decided to take our Fairtrade Triple Certified Espresso Coffee with Eccles Cakes back in the lounge.

I read the news today, in which: The Sunday Times Food List, placed Northcote Manor, in Langho, Blackburn at number 30 in its list of Britain’s Top 100 Restaurants, (third in the North West behind L’Enclume and Simon Radley at the Chester Grosvenor). I say, “Well deserved!”